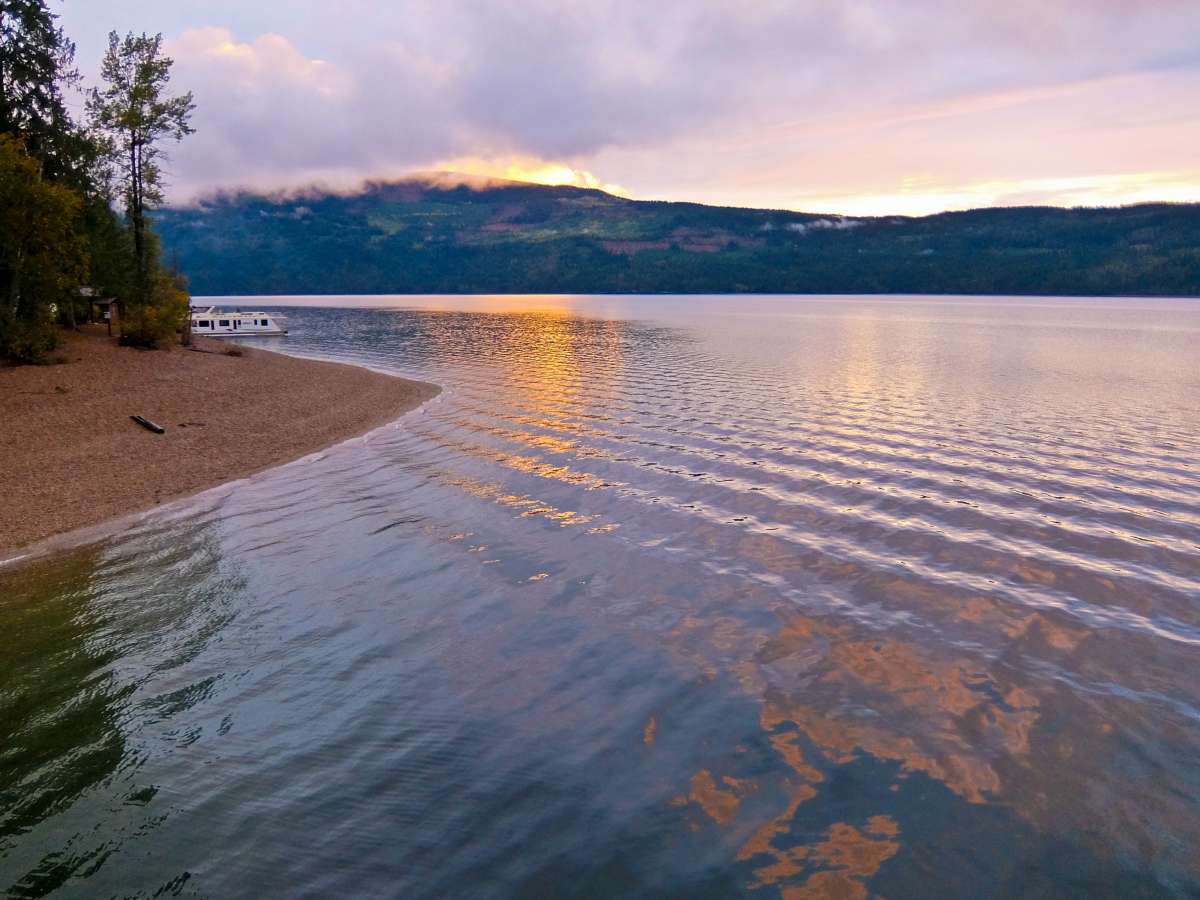 Just a short 45 minute flight from Vancouver, Kamloops lies at the confluence of two branches of the Thompson River. Important during the gold rush of the 1860’s, it was the Canadian Pacific Railway which finally put in on the map when it arrived in 1883.

It enjoys more than 2,000 hours of sunshine annually and with 100 freshwater lakes within an hour’s drive of the city, tourism is becoming increasingly popular. 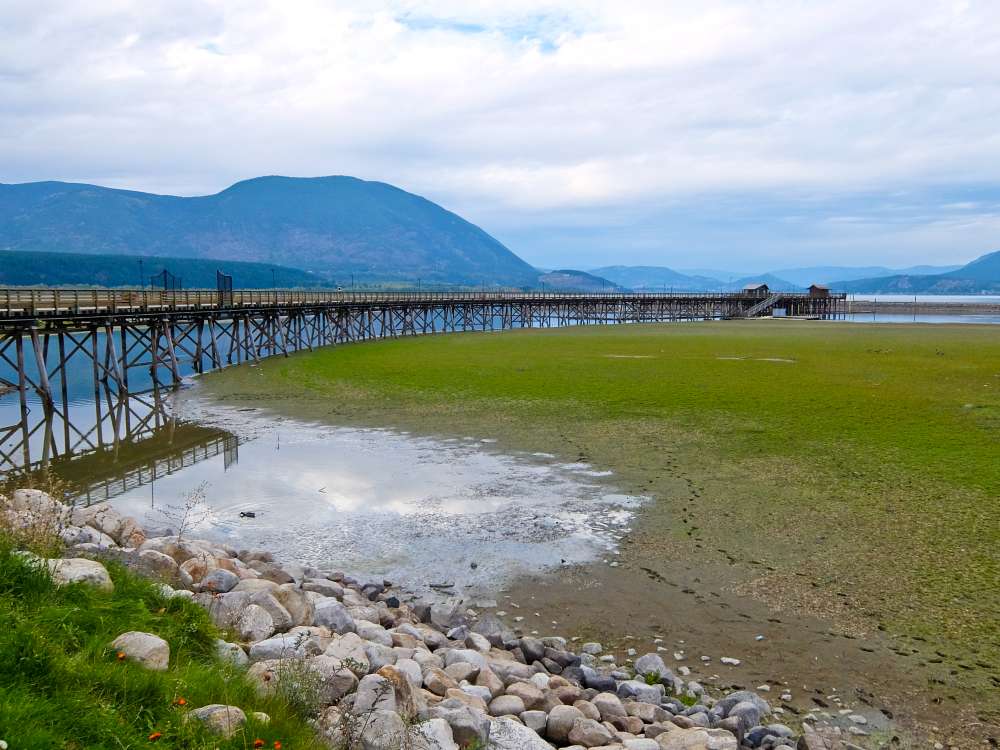 Indeed, the sun is shining when I arrive in early October and check in to the Hotel 540 downtown. That’s good news as I’m here for outdoor activities and next day the weather is holding as I set out to Harper Mountain, around half an hour out of town.

We climb up through the forest and meet our guide, Monique Vek, in a clearing where she has our mountain bikes ready to go.

Monique has qualifications as a bronco rider and only exchanged her mount for the two wheeled variety a few years ago. It was not without mishaps as she’s broken her nose, smashed ribs and other bones, but she says it was her own fault for being too ambitious.

I am beginning to get worried as she helps me into the armour – knee pads, a padded jacket and of course the obligatory helmet. Even though I’m used to riding a normal bike she tells me to stand up straight, keep my feet level on the pedals, lean forward and always look ahead. 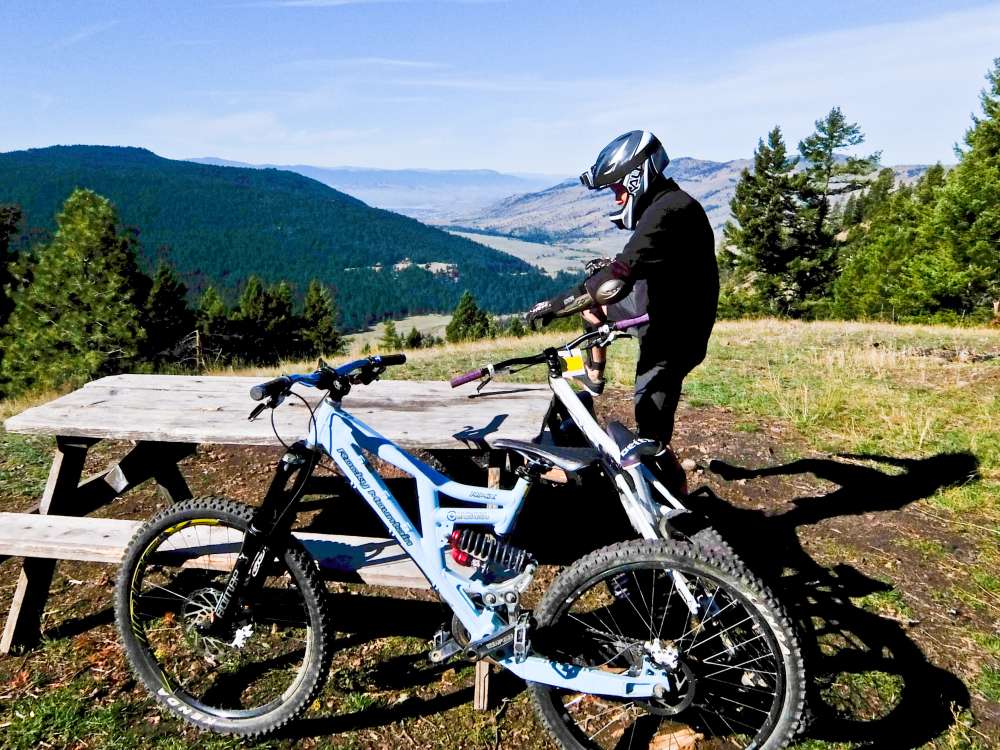 In fact the bikes are only good for downhill as they’re sprung heavy machines, costing over $2000, and completely impossible to cycle uphill. Kamloops has enough trails to keep you occupied for two weeks but nearby Whistler is the mecca of the sport as chairlifts take you up the mountain for that downhill adrenalin rush.

Here in Kamloops, we start off by pushing the bikes up the trail to the start. It’s narrow and steep and I’m beginning to harbour doubts. I let my companions go first, and they seem to make it OK, but I’m not happy. I’m thinking of Monique’s broken bones, so I take the easy option and cycle down the dirt road, practising all the things she’d told me to do, and enjoying it without putting myself at undue risk. It’s so good that I miss the turnoff for the clearing where we’re going to meet for a barbecue and end up halfway down to Kamloops with no idea how I’m going to rejoin the party. Fortunately this has happened before and Monique arrives in her van to rescue me.

I leave Kamloops and set out for Sun Peaks Resort, 50 km to the North East. In the winter this is a ski area and the resort is laid out like an alpine village. There’s no snow here yet which is fine by me as I’m booked on the Voyageur Canoe Tour. It’s a pleasant cross country bike ride to McGillivray Lake where we transfer to an eight person historical replica canoe. Our guide is dressed as a historic fur trapper and, as we circle the lake, he tells the story of his ancestors canoeing all the way from Canada’s East coast in the search for beaver. Fortunately as fashions changed, demand for their tails slumped, and the population began to recover. The fur trappers, exploring the Canadian frontier, did manage a thorough mapping of BC’s waterways. 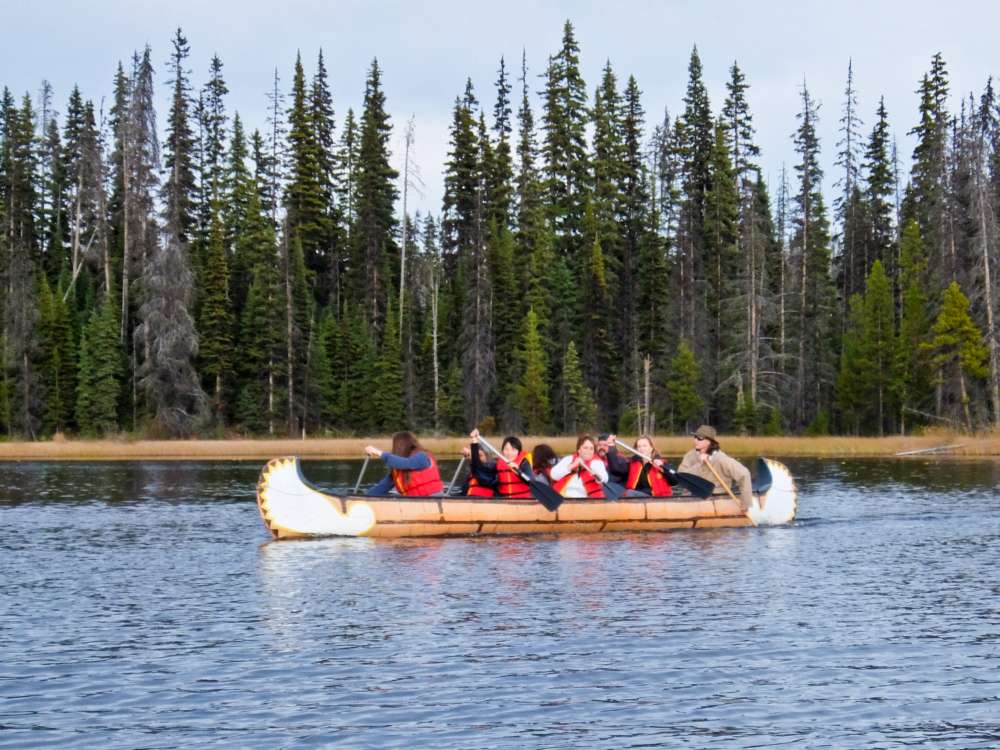 From one of the oldest modes of transport I’m moving to the newest – the Segway. At Sun Peaks they offer off-road tours, piloting souped-up rugged devices, and there’s a short ten minute training session before we’re off. It’s surprisingly easy to get the hang of it and I’m soon speeding up and down the dirt trails. Apparently a previous owner of the company steered his off a cliff and came to a bitter end, I’m slightly more careful. 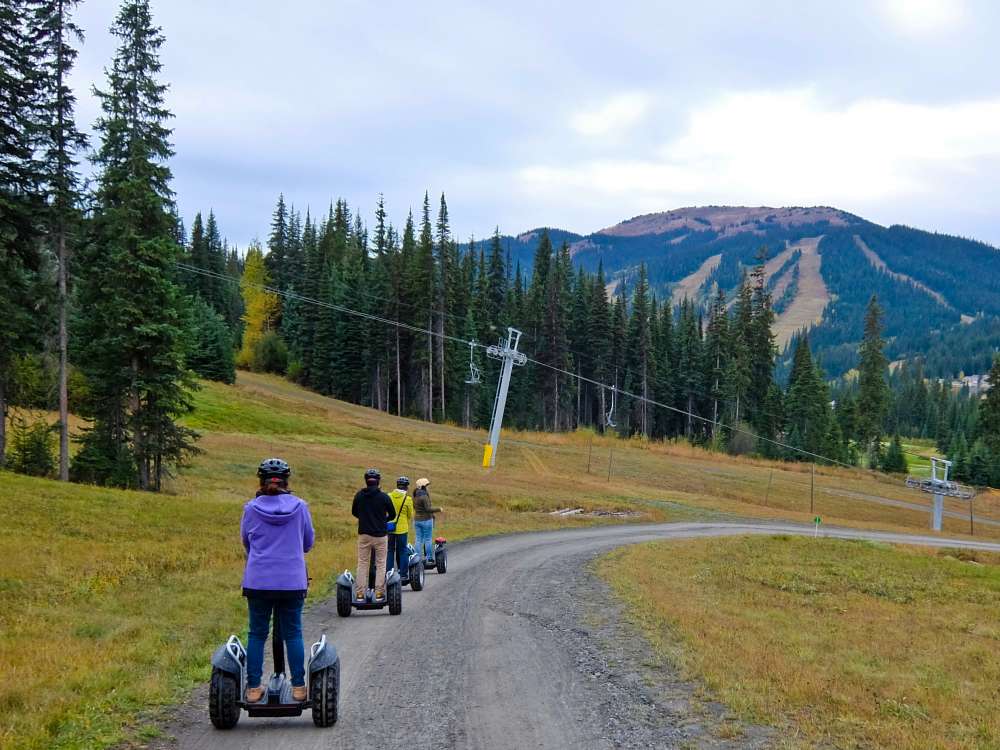 My next destination is Shuswap Lake, named after the First Nations people who live here. I lunch at Quaaout Lodge with Frank Antone, a quietly spoken Shuswap elder who tells me about Secwepemc culture. He’s a fund of interesting stories about their traditions and he shows me a replica of a traditional pit house, a Kekuli, in the hotel’s grounds.

Salmon are particularly important for the Shuswap and just nearby is Haig-Brown Provincial Park, where the Adams River is home to the largest migration of Sockeye Salmon in North America. Thousands of fish travel 14 days from the Arctic Ocean to lay their eggs in the gravel here in October and it’s meant to be an extraordinary sight. Unfortunately, it seems I’m too early, the salmon are still swimming upriver, and I only spot a couple who’ve arrived ahead of the rest of them. 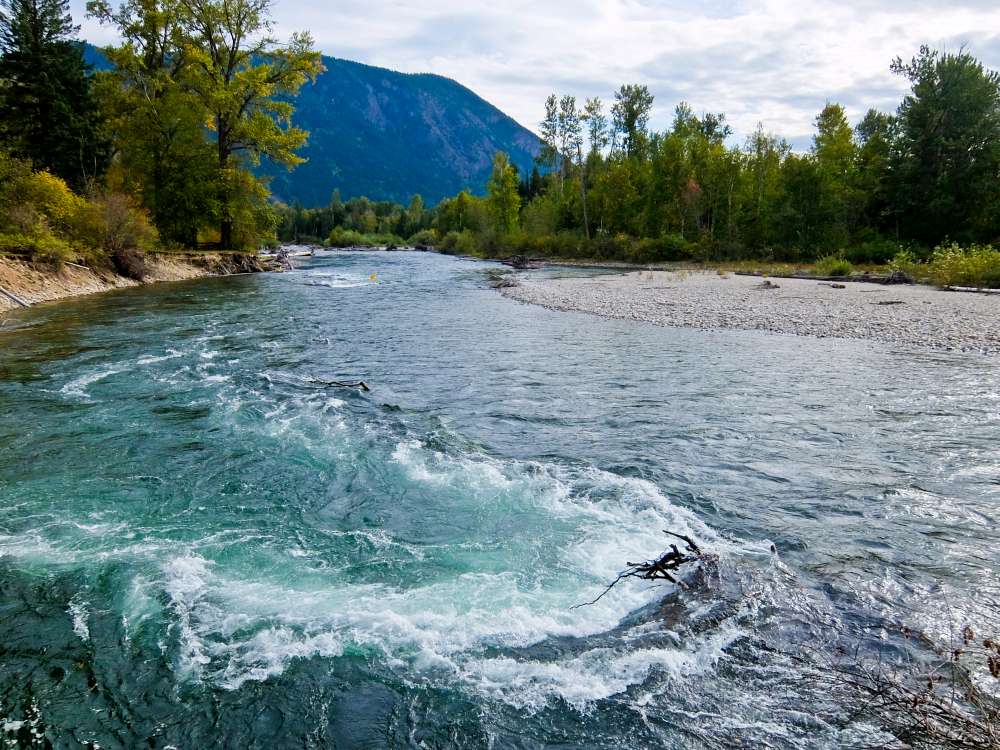 However there is some consolation as nearby is the Shuswap Pie Company in Salmon Arm. I can honestly say that they’re in the running for the best pies in the world and sell around 400 of these gems daily, all freshly made on the premises. They use only natural ingredients and I tuck into a curry vegetable version with crisp pastry – I’m thinking I might need it as I’m spending a couple of nights on a houseboat and it’s getting colder.

Normally I would board the boat at the wharf here but the lake is so low that I have to go to Sicamous, known as the houseboat capital of Canada.

I climb about the Twin Anchors Houseboat and cruise around an hour to moor at Hungry Cove for the night. I’d expected to rough it but the CruiseCraft V is designed to be the ultimate floating resort, complete with hot tub on the top deck. 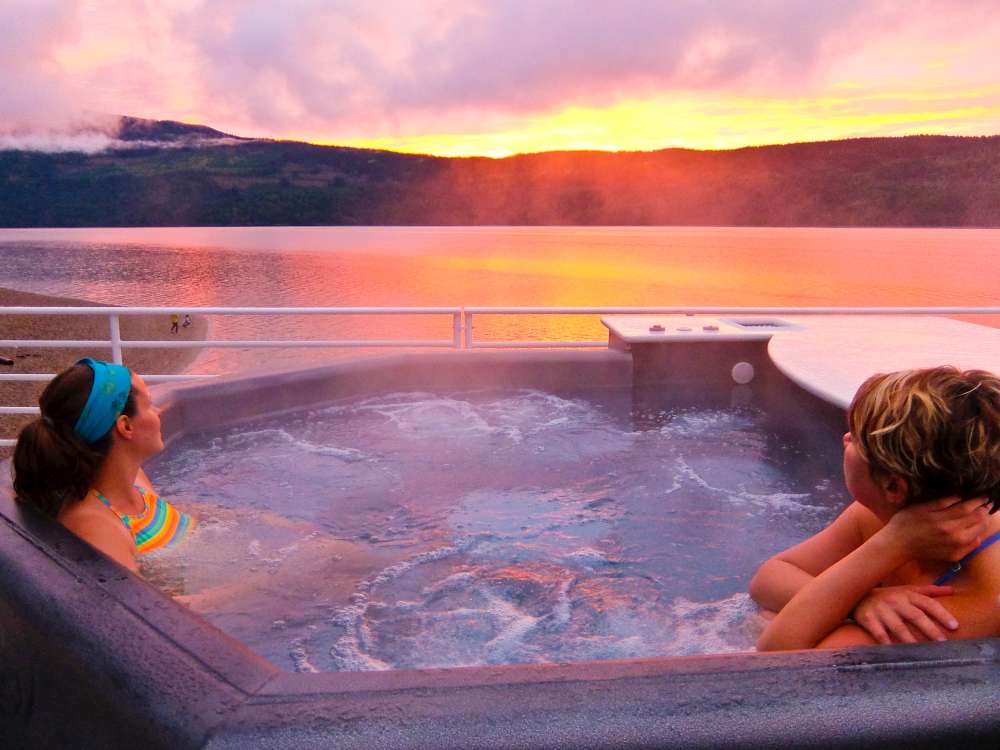 Even better it has its own chef on board and I enjoy an excellent dinner before venturing out to the beach to huddle round a campfire. As I gaze up at the stars, enveloped in the silence of the lake, I can only admire the fortitude of those pioneer fur trappers – at least I can retreat to a comfortable bed, safe from the predations of wild animals, and don’t have to cook my dinner. 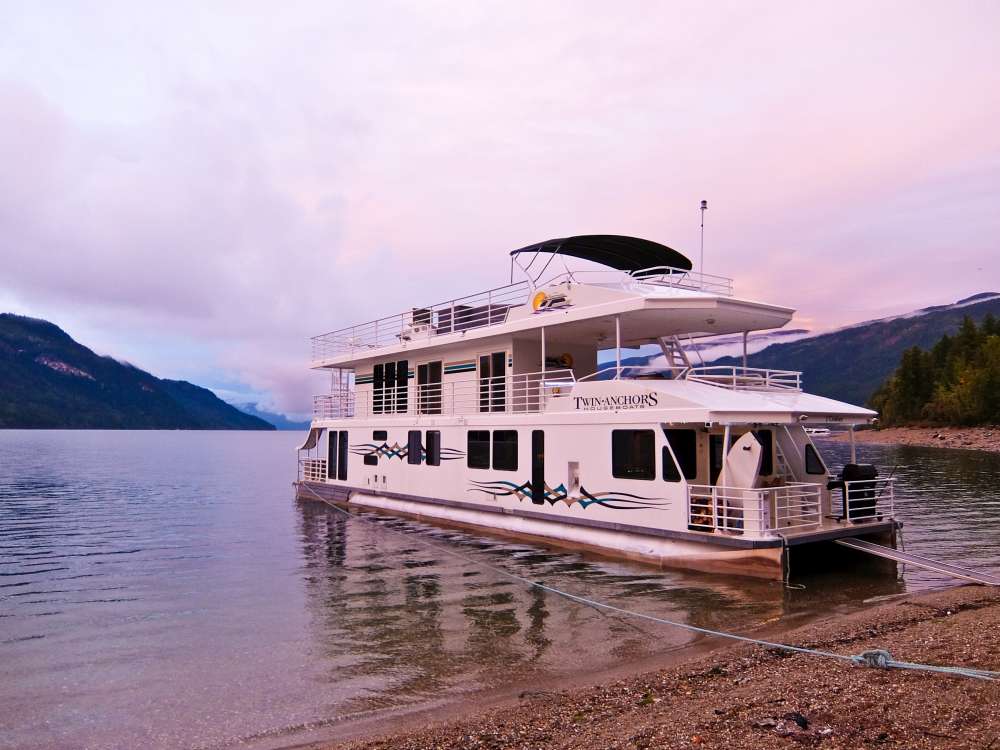