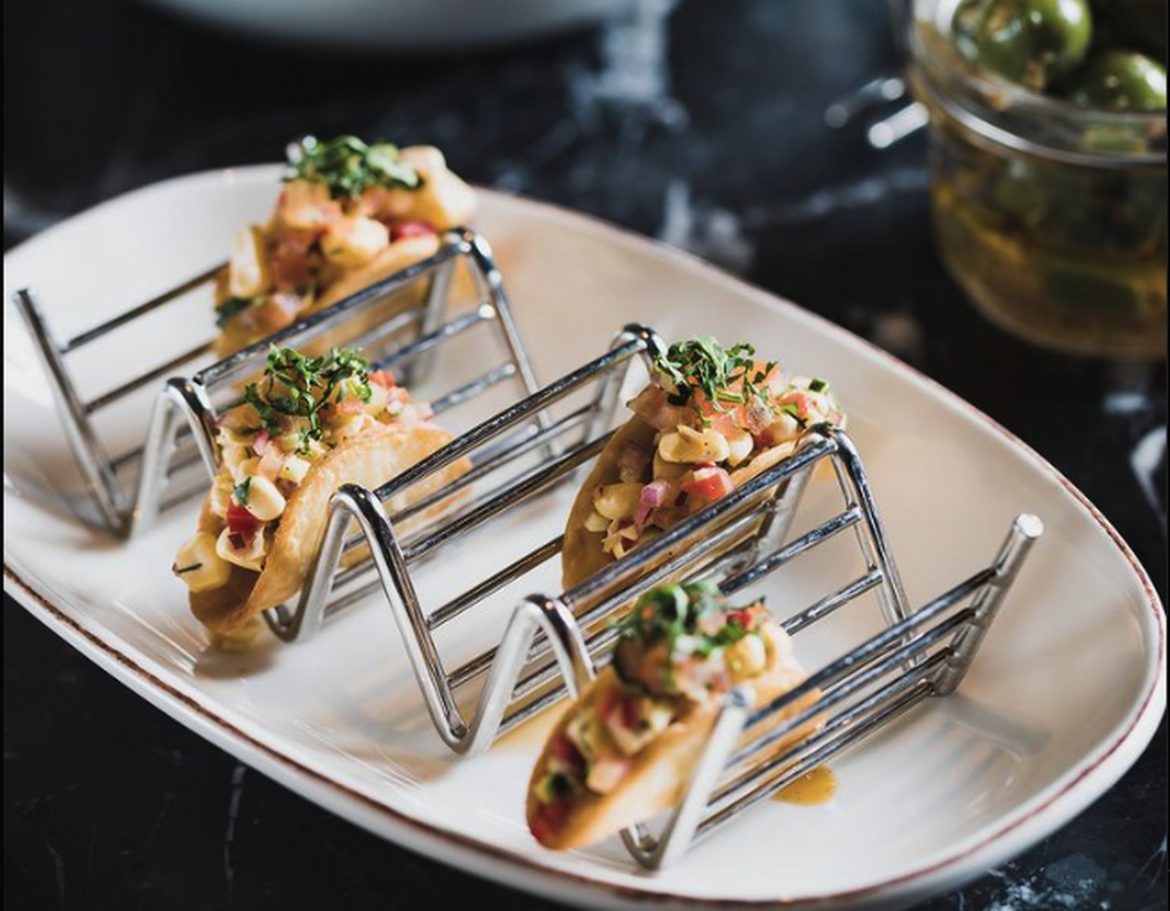 Fusion cooking can sometimes be spectacular, and at other times it can fall spectacularly flat on its gastronomic face. The good news is that they do it particularly well at Monmouth Kitchen. This stylish restaurant is located on Mercer Street, one of the six streets that fan out from the Seven Dials monument in Covent Garden. Though it is part of the Radisson Blu hotel (see review), it has its own entrance and is open to everyone.

The style is small plates made for sharing, and the experience on the palate is an artful fusion of Peruvian and Italian cuisine.

To get to the Monmouth Kitchen restaurant, you pass a bar area with a spacious area to tuck into bar food and sip on whatever your tipple is. That leads to a long space that’s bright and airy in parts, moody and sultry in others, yet always elegant. Some tables are low, others high. We chose a high table on high chairs right at the back of the restaurant in the sultry section. It meant we could enjoy views over the entire restaurant while sipping our cocktails – a nifty margarita and a martini.

There is a buzz around the food as diners are surprised and delighted as each sharing plate turns up – as we were.

Incidentally, service is magnificent and staff are extremely well versed on the dishes and can offer suggestions too.

Is it really possible to fuse Peruvian food with Italian cuisine? We chose six sharing plates (yes six!) and sure enough the Peruvian touches offered plenty of tantalising tang while the Italian contingent offering softness and mild flavourful melted cheese. So here is a summary of our sharing experience:

The seabass ceviche, a typical Peruvian dish, was a fantastic mouthful of tang. In the mix are avocado, white corn and red onion and fresh corn. They also add some soya to which sharpens the taste and enhances its flavours.

Two half corn on the cobs were accompanied by half a lime. The idea is to dip the lime into chilly powder and then rub the corn with it. What a fabulous idea.

Orange and avocado salad with spicy lemon dressing offers a citrusy distraction from the heat of the chilly.

The tuna tacos came as a foursome, and these were doused in lemon and chilly and offering mouthwatering flavours inside crispy tacos.

Slow-roasted Padrón peppers with Maldon sea salt came in a jar with nine of these beauties. Though these are often mild, every now and again, you get one that thinks it’s a jalapeño. My partner and I enjoyed the Russian Roullete we were playing. Neither of us got stung, and these turned out to be nine mildly peppery delicious bites.

Beef carpaccio with dressed rocket and aged Parmesan was soft and worked very well with the leaves and the cheese.

For me, the top of the bill was the four balls of arancini with white ragù and mozzarella. These were softly crispy on the outside with soft cheese and rice on the inside – a mouthful I savoured.

For my fellow diner, it was the spare ribs. They were served in a small hot pan, exuding those hunger-pang-inducing aromas even when not hungry.  He could not get enough of the super soft meat flavoured with the sticky sweet and tangy sauce. His joy was almost palpable, and I felt a tad guilty liberating one of them.

Verdict: Go with someone you really like with whom you can enjoy a sharing experience that’s bound to surprise and delight both visually and gastronomically.