When Jean-Jacques presented his city discovery app, Monument Tracker, I thought I’ve heard it all before. “It will guide you towards a monument.” Well, so will Google Maps. “It will describe the monument you are looking at.” I can use Wikipedia for that. “You can check in to places and earn points.” Didn’t Foursquare use to have that feature? In other words, I was sceptical. Yet, I decided to give it a try on my recent trips to Paris, London and Rome.

Tip: if available, start by downloading Monument Tracker for your local city, in order to get better acquainted with the app so you make the most of it while travelling.

Create a profile and advance from Beginner to Master 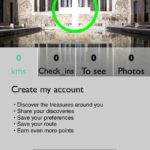 When I started using the app, I was classed as Beginner and gained points by reading monument files, checking in to places, taking photos, recommending places, etc. I found this feature very addictive and was looking for every opportunity to gain points. Incidentally, although I was never in a city long enough to reach Master level, apparently “masters” can build walking itineraries for other users and sell them via the Monument Tracker platform.

View monuments either as a list, on a map or as part of an itinerary 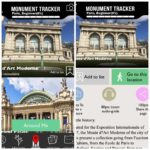 Monument Tracker listed monuments according to my location, with the closest ones at the top of the list.

By clicking on a monument in the list, I was presented with a photo slideshow, history of the monument, its location on the map relative to my GPS position and options to either add it to the must-see list or to be guided towards it.

It was fun just browsing the list of monuments and then adding the ones I recognised to my must-see list. What distinguishes Monument Tracker from other apps is that it alerted me to nearby monuments I would normally miss as I did not add them to my must-see list – when I was close to a monument, the app vibrated and a pin on the map started flashing to invite me to click on it. 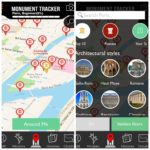 The map view could be overwhelming when I was in the city centre. Pins were sometimes too close together and I had to zoom in to see them individually.

However, a really useful feature were the filters, allowing me to only view my must-see selection or monuments with a specific architectural style.

Tip: check out the Historic Restaurants filter. I discovered Bouillon Chartier in Paris this way and loved it. 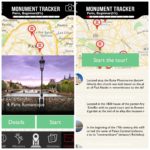 In all three cities – Paris, London and Rome – I started off by browsing through the list, then exploring what’s around me by looking at the map. But the bit I enjoyed the most was exploring the city using guided tours. For each city, there were several itineraries, some free and some at a cost (such as the ones including audio guides or human guides).

Each tour lasted around 1½-2 hours, depending on how long I had lingered at each monument, listening to the audio guides, taking photos and checking in to earn points.

Tip: bring headphones with you as that will allow you to listen to descriptions of church interiors without disturbing other visitors.

Take on a challenge

As mentioned above, the first challenge was to advance my status, from Beginner to Master, which I thoroughly embraced. But Monument Tracker has taken the concept of gamification even further, including features such as:

What I find particularly interesting is the upcoming feature (launching this summer) of being able to share my profile with a friend who has the same app, so if a friend is going to London they will automatically see the places I recommended.

This is a well-designed, feature-packed app that will change the way you explore a city. The gamification and the sharing aspects are something which make the app fun as well as informative.

Disclaimer: We were recompensed for our time in reviewing the app, but our review remains independent and unbiased.

2 bedroom apartment with a swimming pool on French Riviera

What you need to know for a camper...

5 money saving tips for your next air...