Ancient Romans called it Roma Aeterna – The Eternal City – and you never have to walk far to be reminded of the eternal legacy of the Roman Empire: from the iconic Colosseum to the Pantheon. However, the Italian capital is also rich in Medieval, Renaissance, Baroque, and Neoclassical architecture. One could probably spend weeks walking the streets of Rome and discovering something new, but I was in the city for just 24 hours.

So, I downloaded the Rome Monument Tracker app (read my review here) and chose The extravagances of the Baroque self-guided tour from the menu of itineraries because it covered the Trevi Fountain and promised to describe some amazing baroque churches.

Be aware that the word baroque is not contemporary of its time, the 17th century. The term only emerged in the 19th century as a derogatory designation. Its origin stems from the Portuguese expression “barocco” meaning “distorted pearl”. At the time the baroque style was very unpopular and considered as being gross or weird.

However, in the 17th century artists saw themselves as being rather “classical”. So lets ask ourselves why use the term “baroque”? For that we need to step back into the 16th century. [download the app for more]

The tour started at the Santa Maria della Vittoria Church. I clicked on “Start the tour!” button and the app offered walking instructions how to get to the church. 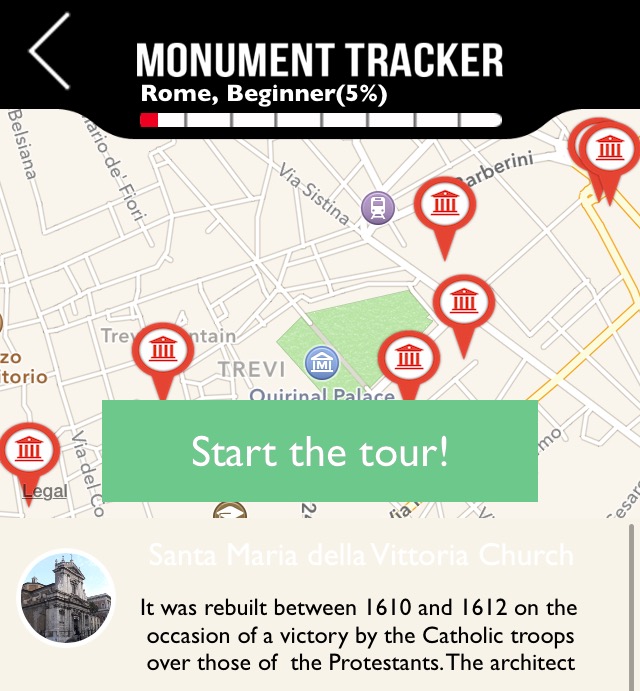 The tour begun by describing the church, but I skipped that bit because I was more interested in the chapel. Tip: you can either read the content on the app, or you can listen to the excellent audio guide – just remember to bring headphones so you are not disturbing the silence inside the church.

Here we are at the funeral chapel that Bernini built for Cardinal Frederico Cornano. It is indisputably his greatest masterpiece. One of the main characteristics of baroque art is its dramatization, which you can discover here. First notice the set, staged like in a theatre encircled by a double column. On each side you can see the spectators who are the family members of the deceased, Federico Cornano. Like in the theatre, they are placed in boxes, talking to each other, as it was the custom during representations at the time. [download the app for more]

The app then took me down Via Venti Settembre street towards Saint Andrew of Quirinal Gardens, past the Quattro Fontane (Four Fountains). The Fountains are such an amazing architectural feature that it felt almost frustrating not to have had them as part of the tour, but I was able to exit the tour and read about them using the Rome Monument Tracker database. 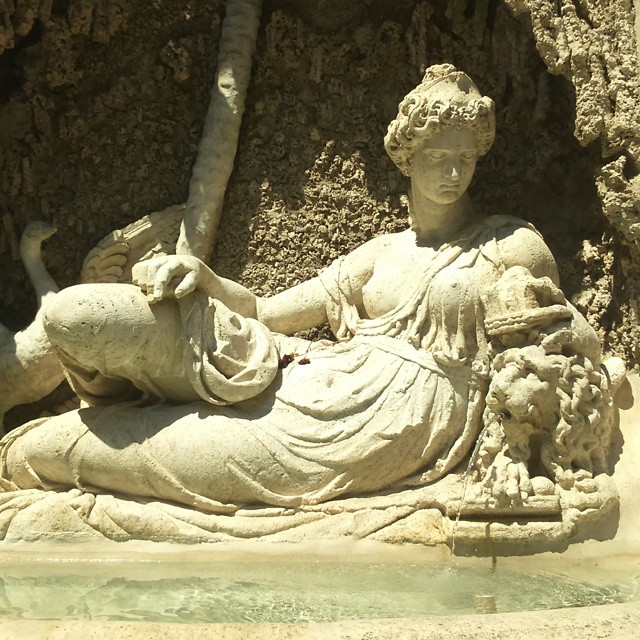 One of the four fountains at Quattro Fontane, Rome (c) Martino Matijevic

Following the itinerary, I got to the Saint Andrew of Quirinal church, built for the Jesuits between 1658 and 1678 in accordance with Pope Alexander VII. The sight of the nun in white gown immediately gave me the sense of spirituality and appeasement. 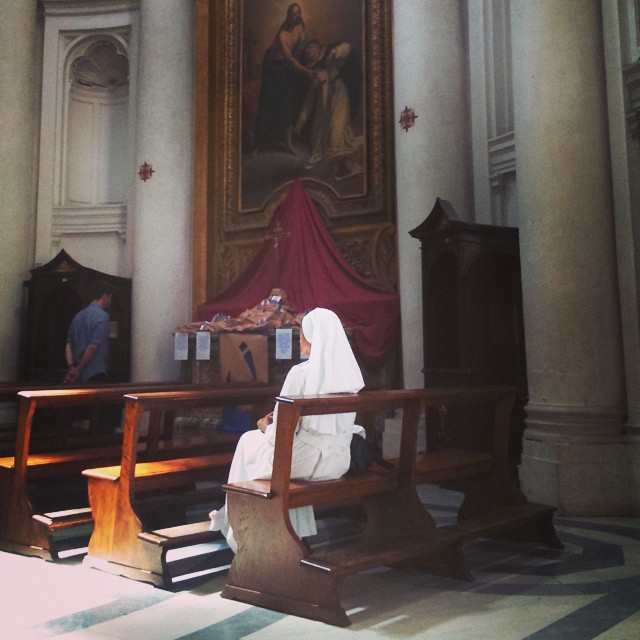 The church of Saint Andrew of Quirinal is the seat of the Jesuits noviciate. This small church is one of Bernini’s rare works he supervised from the beginning to the end even if took 30 years to complete the building. He considered it to be his greatest success. [download the app for more]

Upon exiting the church, the app took me back towards the Four Fountains, this time inviting me to visit Saint Charles Church. The Italians call this church Chiesa di San Carlino alle Quattro Fontane (‘Carlino’ is the diminutive of “Carlo” – Italian for Charles – so the literal translation would be Church of ‘little’ San Charles of Four Fountains). I was curious why the Italians gave it the adjective “little” and Monument Tracker explained:

The church of Saint Charles with its four fountains that we see in front of us is a small jewel. So much so that it could supposedly hold in one of the pillars supporting Saint Peters’ dome in Rome. Accordingly the Italians gave it a Roman diminutive: il Carlino. [download the app for more]

The app took me past Barberini Palace, which houses the National Gallery of Ancient Art. Entrance to the Gallery is €7 and hosts works by masters such as Lippi, Titian, and Caravaggio. Monument Tracker gave me a brief history:

Both artists are going to work together on one single project: the Barberini Palace. We are just about to pass in front of it. The construction was commissioned to Bernini who was always in good terms with the popes, at the time Urban VIII. Carlo Maderno, Borromini’s uncle had started the construction, and delegated its completion to his nephew. Both architects are thirty years old and they find themselves building each a staircase (among other elements). Situated on either side of the Palace, the structures are research works. Borromini continues to use only curves opting for a helical layout, whereas Bernini chooses a square section arrangement. Both artists use double colonnades and if you look out for both staircases, you will find that their elevation is equally subtle. This is where their roads part. Bernini will finish the palace on his own.

The Trevi Fountain was a little disappointing. It has been covered in scaffolding since December 2014 and it is expected the restoration work will continue until October 2015. 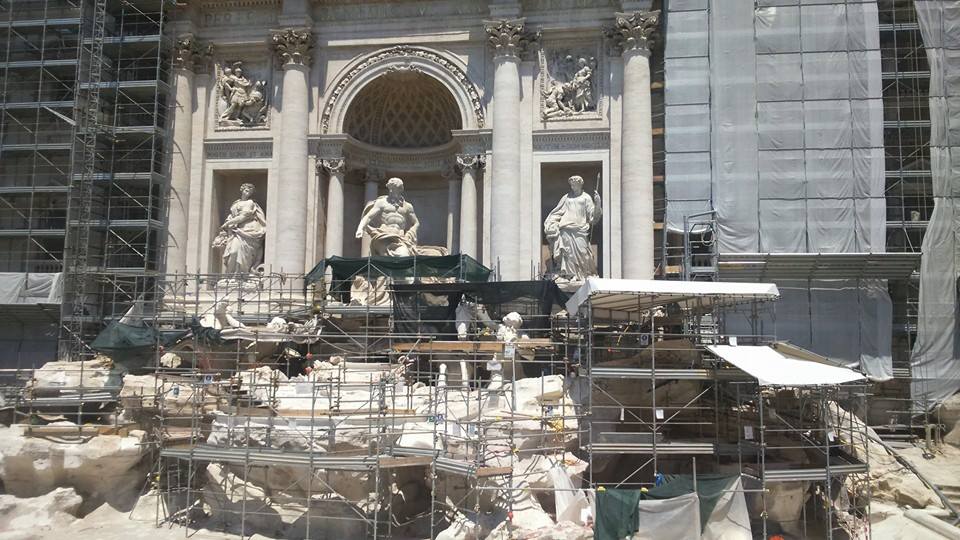 Did you know that €1 million collected from Trevi Fountain each year are donated to charity?

Throw in a coin if according to tradition, you wish to realize the dream of coming back to get it. However, even if you wish to come back, know that the coins are taken out every morning! It’s however for a good cause! One million euros picked from this fountain are donated each year to charity work: so don’t hesitate and throw!

The tour next took me past Piazza di Pietra with the most amazing bougainvillea around Salotto 42 Bar and ended with a visit to the Stanilas de Loyola church. 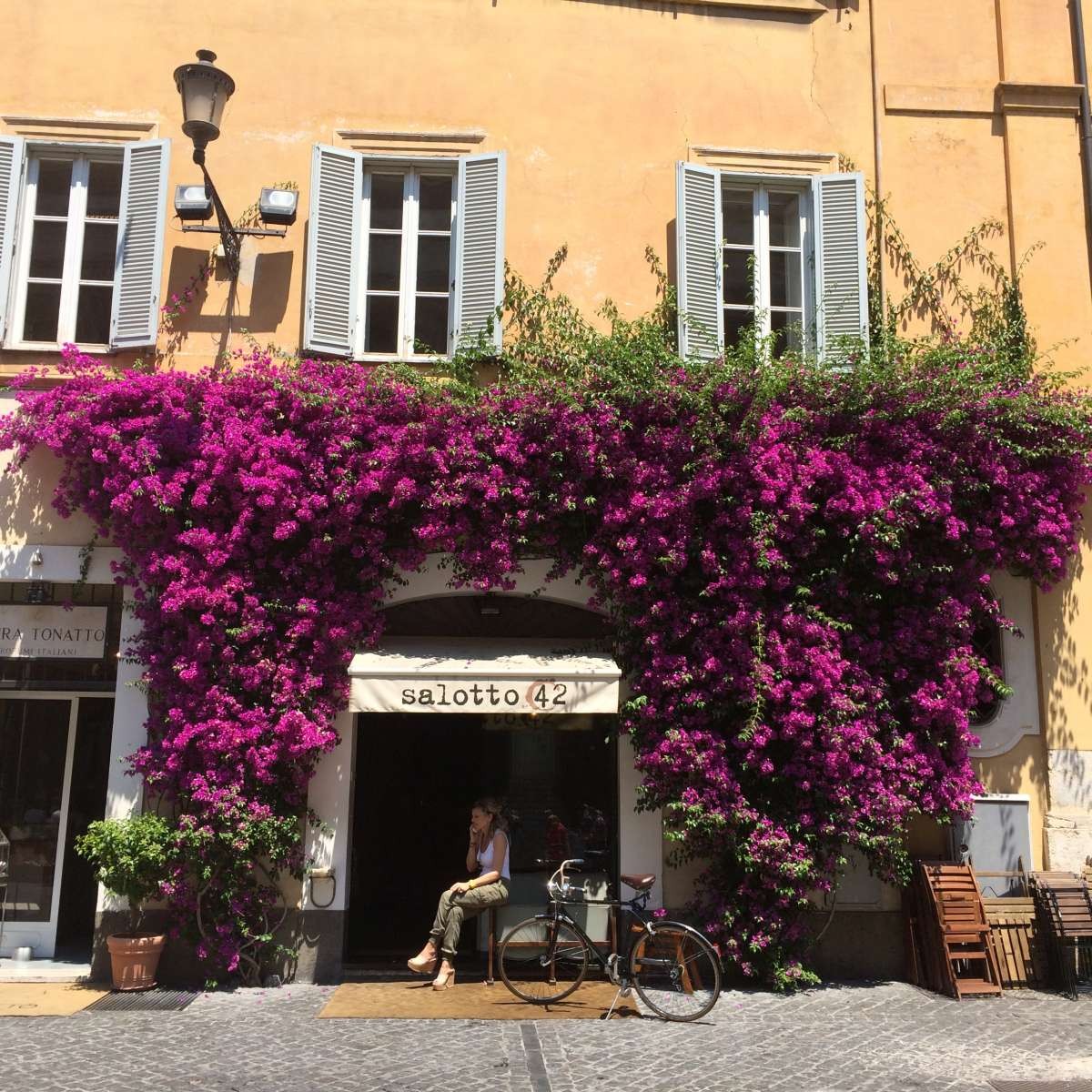 The creators of the time were great masters of this art of illusion. Enter and see. Look up without loosing your balance. This ceiling is exceptional, isn’t it? 8070 square feet created in three years by the talented Andrea Pozzo. An architectural perspective revolving around… emptiness. You feel as if you were sucked up. This procedure was then labelled the illusionist ceiling painting of the quadratura (di sotto in su). No ceiling, no floor! It invites us to lie down to contemplate the figures, to understand them and put them into perspective… or to fly away with them. [download the app for more]

Rome Monument Tracker is available for all platforms on App Store and Google Play:

Disclaimer: We were recompensed for our time in testing Rome Monument Tracker.