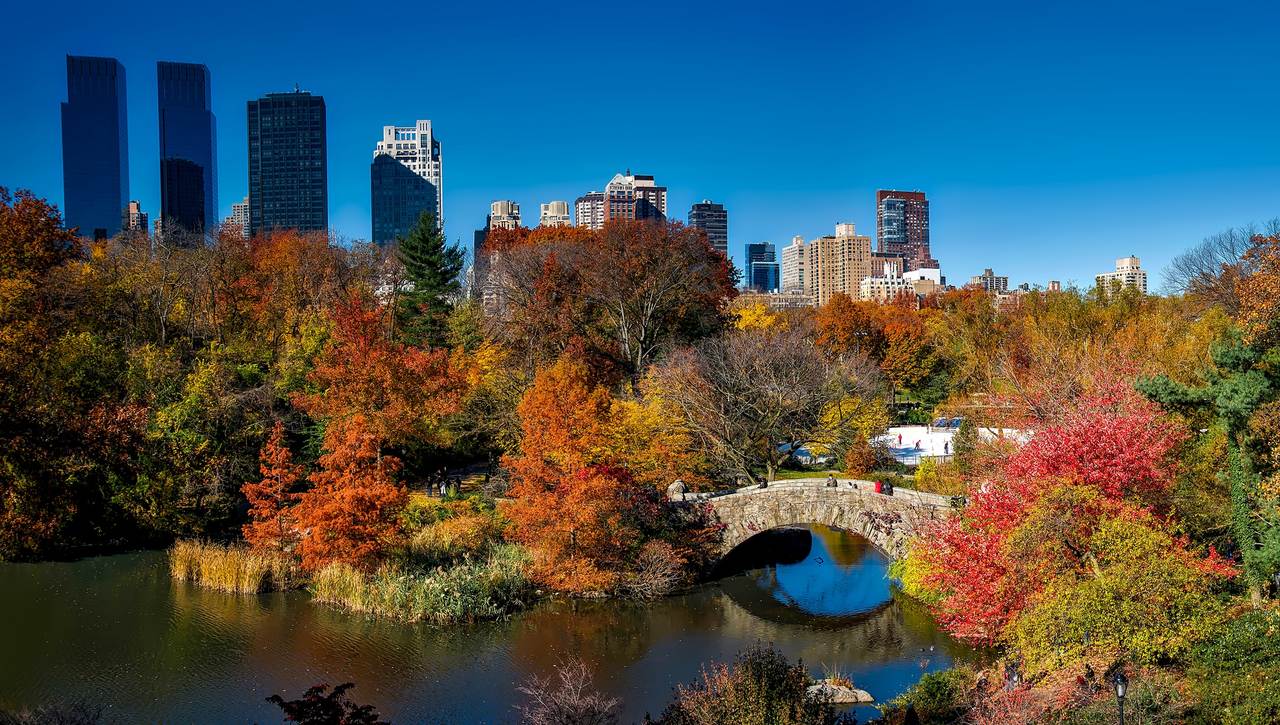 New York on wheels may put your head in a spin – from the traffic jams to the busy subway, commuting in the city is far from a relaxing journey. That was my mind-set before our latest visit to the Big Apple, when I discovered the two-wheeled kind was in fact not only a great way to explore my surroundings, but travelling on bike also gave me a different perspective of this incredible city.

Bike tours are a great way of touring a city

I’ve done bike tours in Paris and Barcelona – but I couldn’t imagine it would be enjoyable in New York where the hustle and bustle of the city is all encompassing. How wrong I was! Admittedly, it wasn’t a ride across Times Square or even down Fifth Avenue that I was attempting but a tour of Central Park – which may sound slightly less hectic. Even so, with hundreds of things to do in the park and a reported 40 million visitors a year, it is still buzzing with activity.

It is no wonder that the iconic park is referred to as New York City’s playground – the vast green space is one of the top New York attractions for locals and tourists and is the equivalent size of 650 football fields.

This may sound somewhat intimidating – especially for someone like me who is a fair-weather cyclist – but the promise of a tour that brings alive the park’s history and provides a chance to view famous Manhattan landmarks without queues or the endless throng of tourists was enough to convince me (although the opportunity to try to offset the pile of waffles and the milkshake I’d consumed for breakfast through a two hour bike ride might also have had something to do with it.)

Before contemplating what lay ahead I needed a guiding hand and that came in the form of Jennifer, our guide from Unlimited Biking, one of several bike companies that had come highly recommended to me.

I arrived at the bike shop – situated five minutes from the park- in a state of anxiety. It was chilly and the last time I’d ridden a bike had resulted in a very prickly situation; me tipping the baby basket (and said third child) into a thorn bush. However, it didn’t take long for Jennifer to calm my nerves; in fact her boundless energy and enthusiasm helped fuel my adrenalin.

After all, it wasn’t every day I took a bike ride without the kids in one of the most beautiful parks in the world. In fact, despite the unusually chilly conditions – seeing the park covered in orange and red hued leaves added to its beauty. 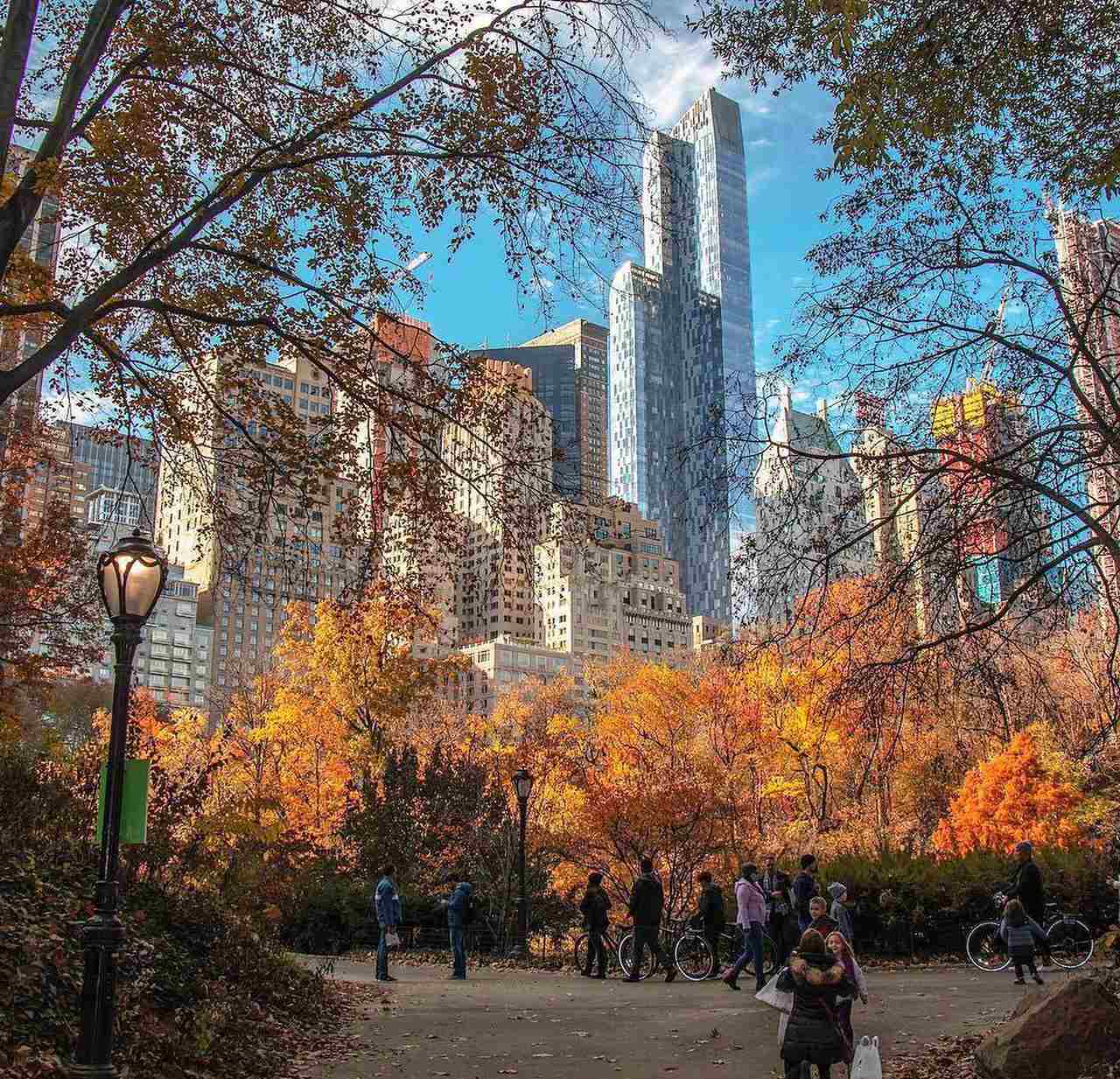 The first thing to remember when taking a bike tour of Central Park we learn is not to offend the joggers.

Stick to the cycle lanes, stay out of their paths and keep your eyes ahead of you. That part was only too obvious I thought until I realised with the skyscrapers looming ahead of just how easy it was to lose concentration – everyone stops to stare. 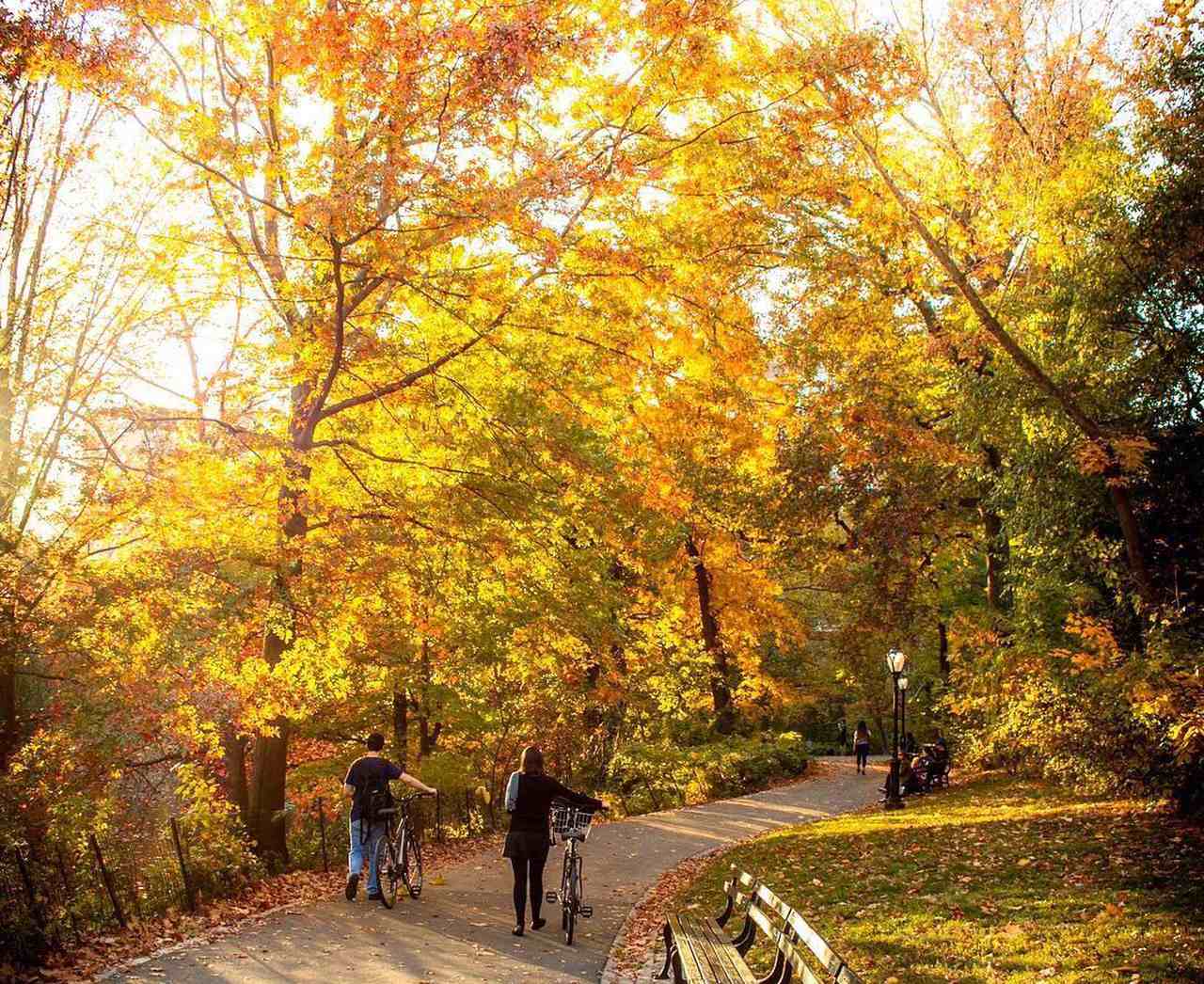 Contrary to how it looks, cycling around the park is no mean feat. It is full of steep hills and windy roads so you need to be prepared for some pedal power to get through it, to be rewarded with some of the best views and sights of the city.

Times Square, Manhattan’s most chaotic site, is just a few blocks away, yet on the cycle path it’s so silent, so un-New York that it feels rather tranquil. And I’m actually learning something. Not so much about cycling uphill – which I’m slowly getting the hang of – but about the city.

My past visits to New York have been a blur of shopping and eating, but today Jen is pointing out sites I never knew existed. There’s the vast buildings that home some of New York’s wealthiest residents, intricate carvings and statues around the park and even benches which can be adopted with a donation of $10,000. 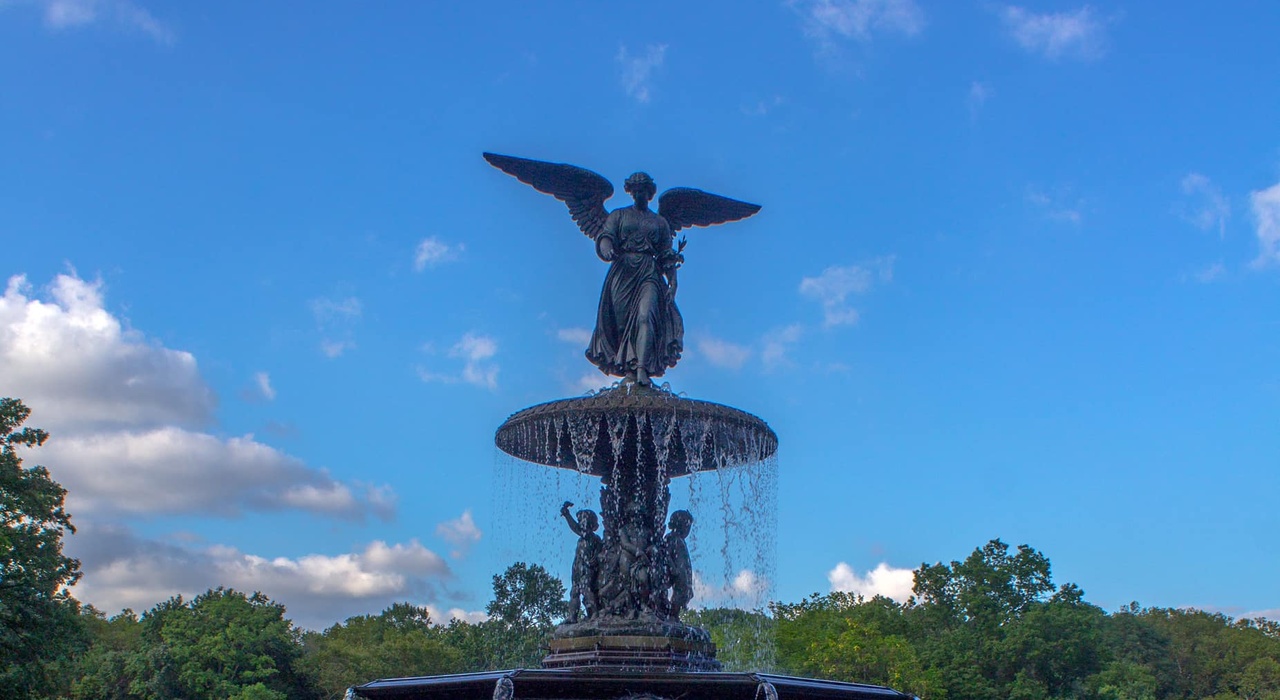 And then there is the famous Bethesda terrace and fountain which have been featured in many a film, the parks reservoir – where we learn about New York’s water system and the running track where President Clinton and Madonna have been known to run.

With our last stop on the bike ride being the infamous Strawberry fields – the 2.5 acre landscaped section of park named after the Beatles song- Jen points out the nearby block where John Lennon lived and lets us into a story about how Yoko Ono is often spotted in the park getting some fresh air. 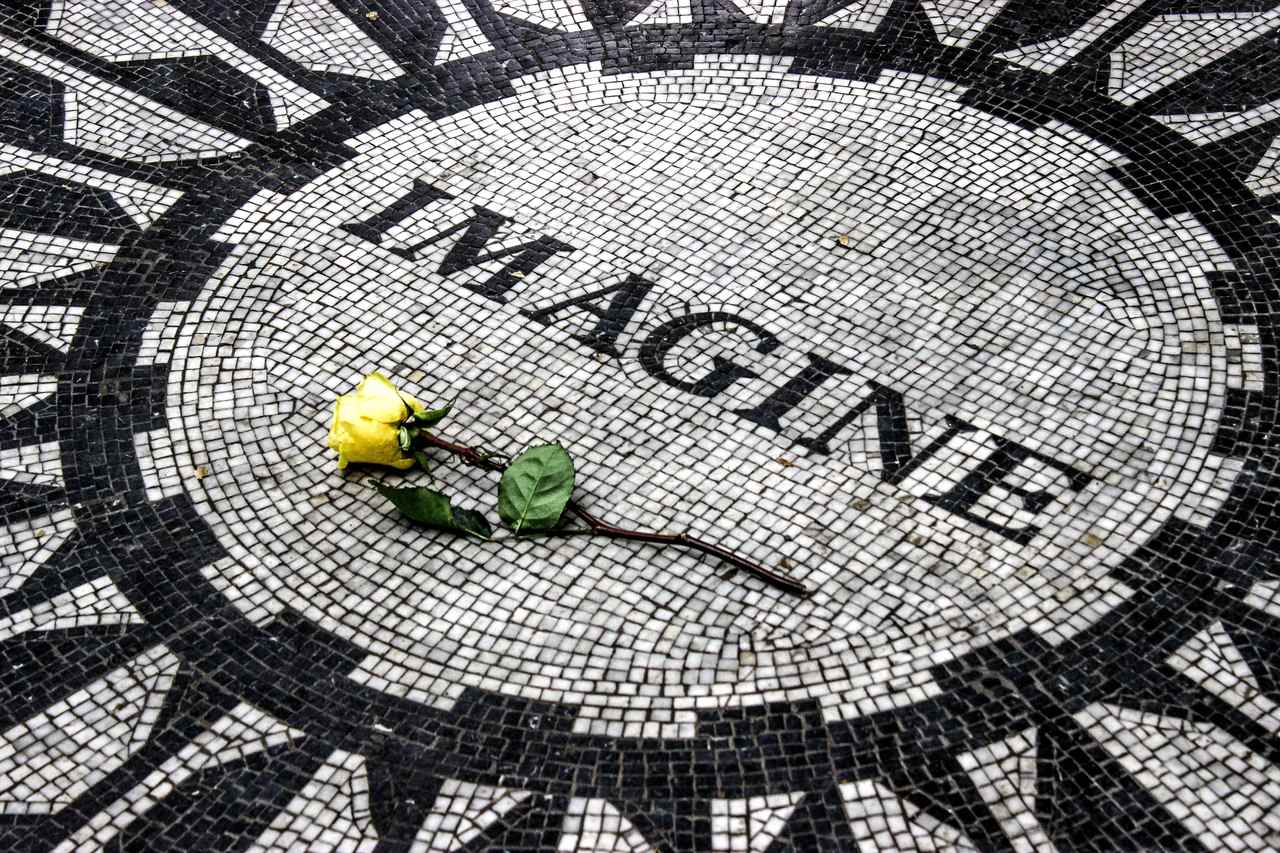 With plenty of time to soak up our surroundings, rest breaks and photo opportunities – this bike ride is certainly one that will take you to the core of the Big Apple!

Walking Tours: From New York City Kopp Tours. Choose from a $45 for a 90 minute walking tour or a $200 fortwo hours with 20 professional photos of you at a few of your favorite iconic places.