Pale Hall Hotel is probably the most romantic hotel in Wales. 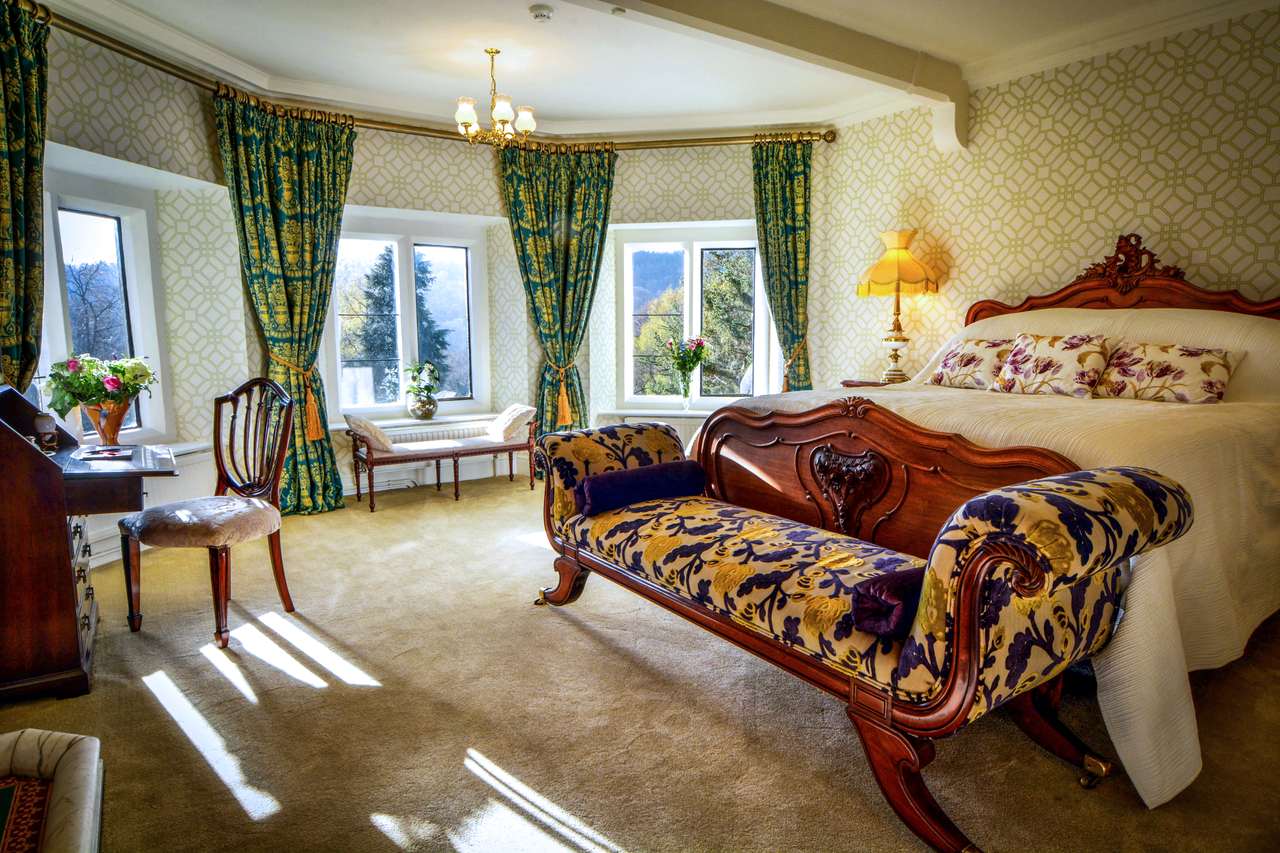 Carvings of the former owner’s face on the porch may seem a little boastful, but then again, the Scottish architect of this imposing honey-hued Victorian mansion, Henry Robertson, was an industrialist, mining engineer, prolific railway builder and Liberal Party MP. He had a lot to boast about. 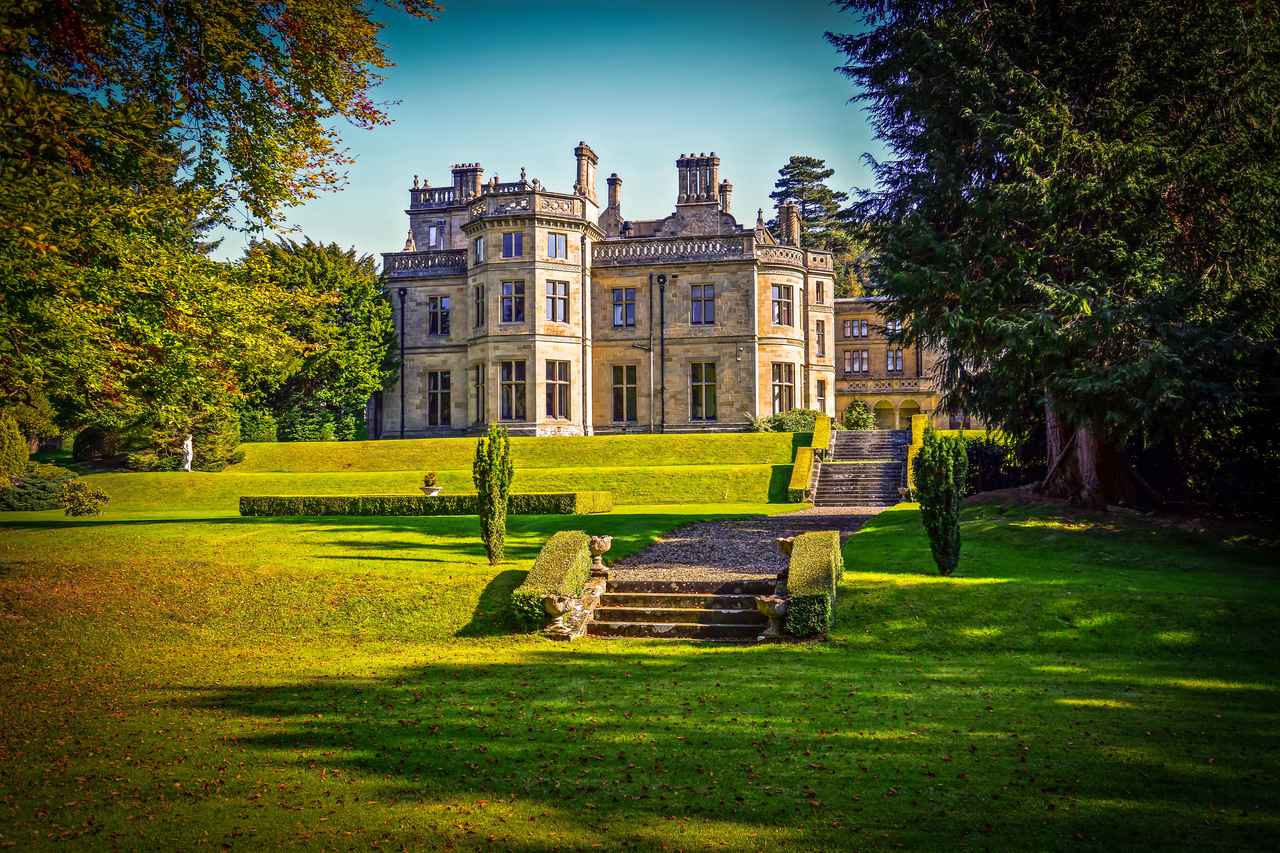 You can see his flamboyance in the turrets, the spire, and the clock tower, which incidentally still chimes. When he died in 1888, the house went to his son Henry. Queen Victoria knighted him and sojourned here for a while.

Since then, Palé Hall was used as a military hospital for recovering officers in The Great War, served as a home for evacuated children in World War II and remained empty for 20 years. In 2015 it was acquired by the Alan and Angela Harper (of Vodafone fame), who renovated it with exquisite taste, making it their home before giving it over for use as a hotel.

Palé Hall is meant to be a stately home rather than a hotel and offers plenty of wood panelling, parquet flooring, ornate staircase bannisters, artworks, imposing fireplaces, chandeliers and a myriad of antiques. 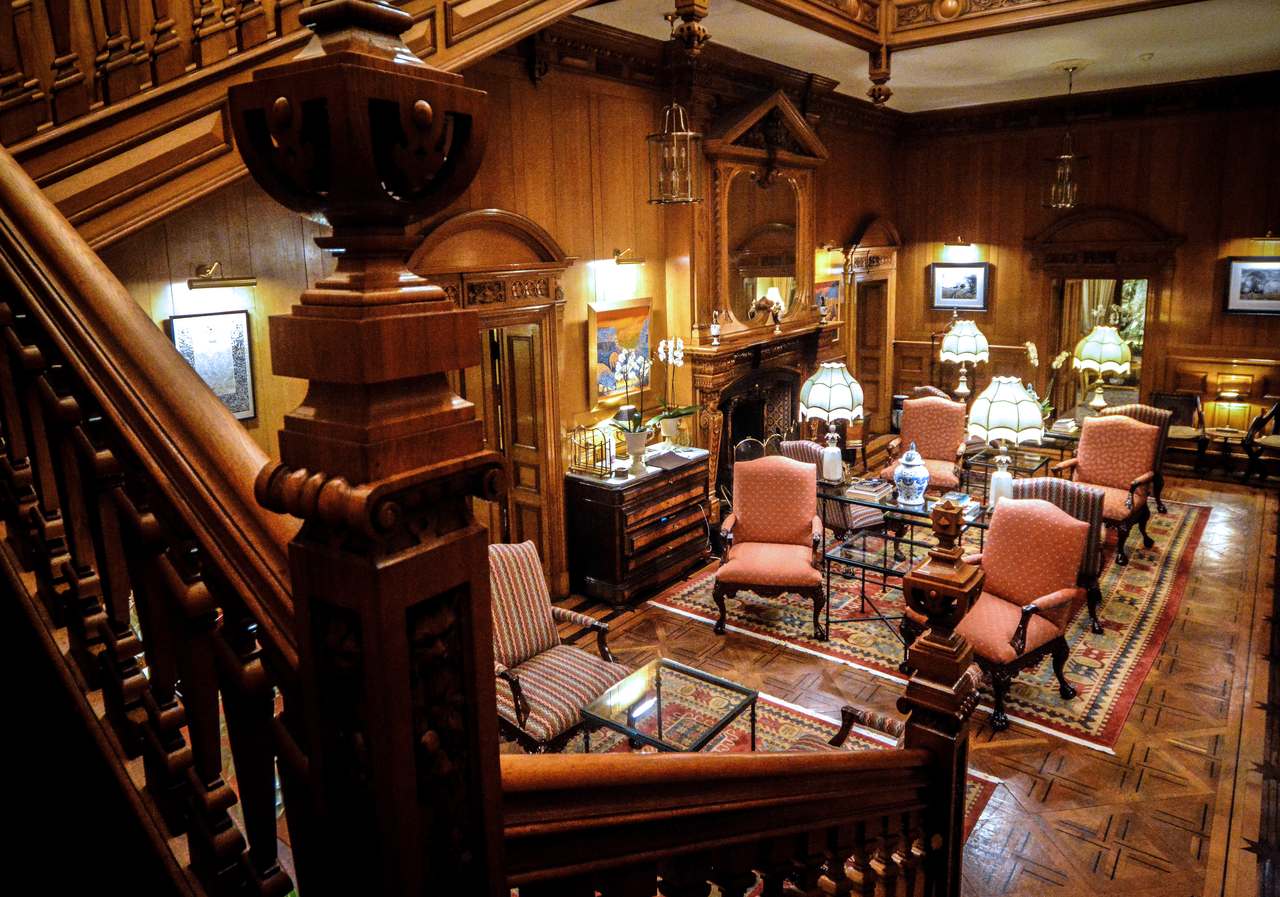 I’d go as far as to say Palé Hall is charmingly idiosyncratic. There’s no reception or formal check-in area. On arrival, you are greeted at the porch, and your luggage is whisked away. While that’s happening, you are invited into the Huntsman bar and bistro for a coupe of Prosecco. By the time you are done, your luggage is already in your room, and your key is delivered to your hand. It’s a seamless, smoothly done welcome by a team who are joyful and often good company.

Interestingly, electricity is hydro-powered by water from the stream at the top of the mountain.

There is a Downton Abbey vibe going on, a place where you dress for dinner. It has a quiet, isolated location close to the mountainous Snowdonia, and there’s romance in that peaceful picture that would suit couples and family get-togethers. Dogs are welcome too.

There are 18 uniquely decorated rooms with flowing, subdued colours that you might find in nature. Many have glorious views over the grounds.

There’s a kettle with teas and hand-made biscuits but no coffee or Nespresso machine – the preference is to deliver coffee via room service. There’s no mini-bar, but there is free bottled water and a full bottle of Mead instead. The TV, which when not in use is an ornate gilt-framed mirror. 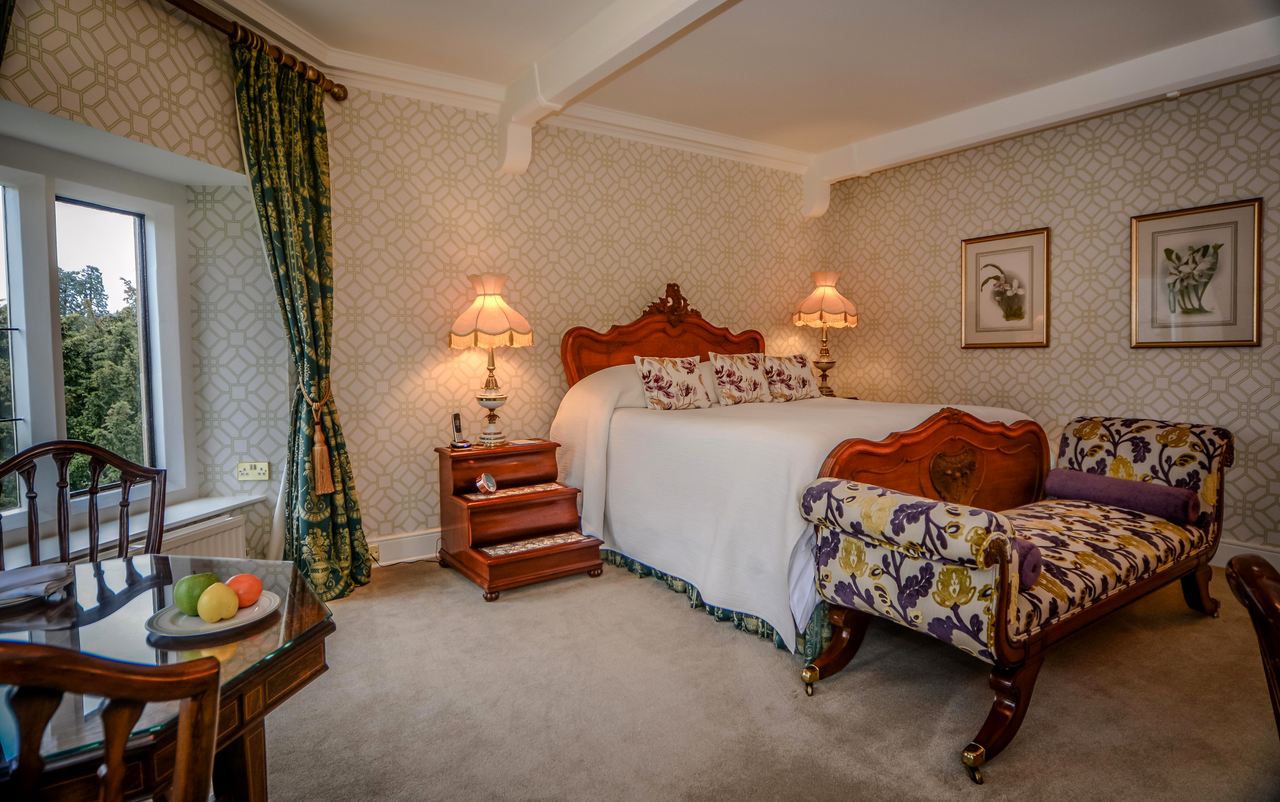 Bathrooms are luxurious with a large free-standing bath with taps in the centre, which means two can bathe together. 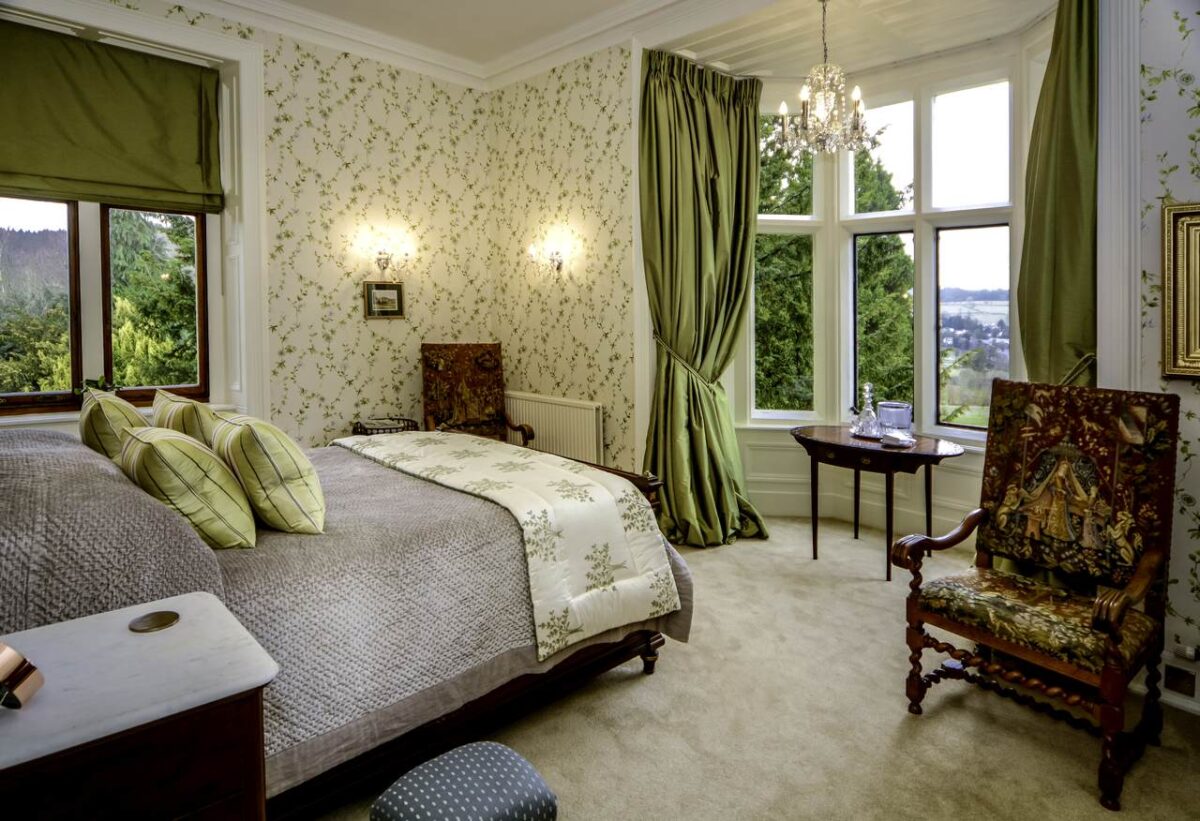 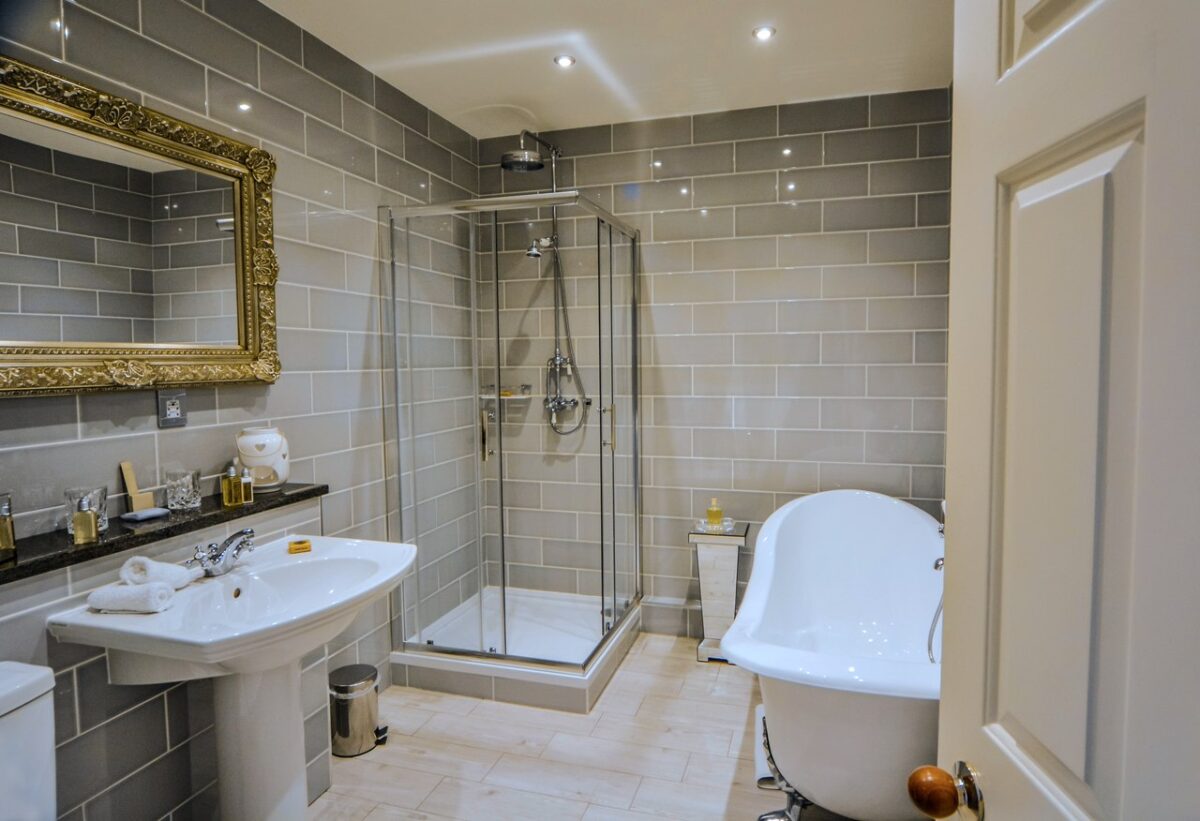 The beds are higher than normal. It’s a matter of climbing into bed – literally. There is a low stool at either side, so you can step onto it. 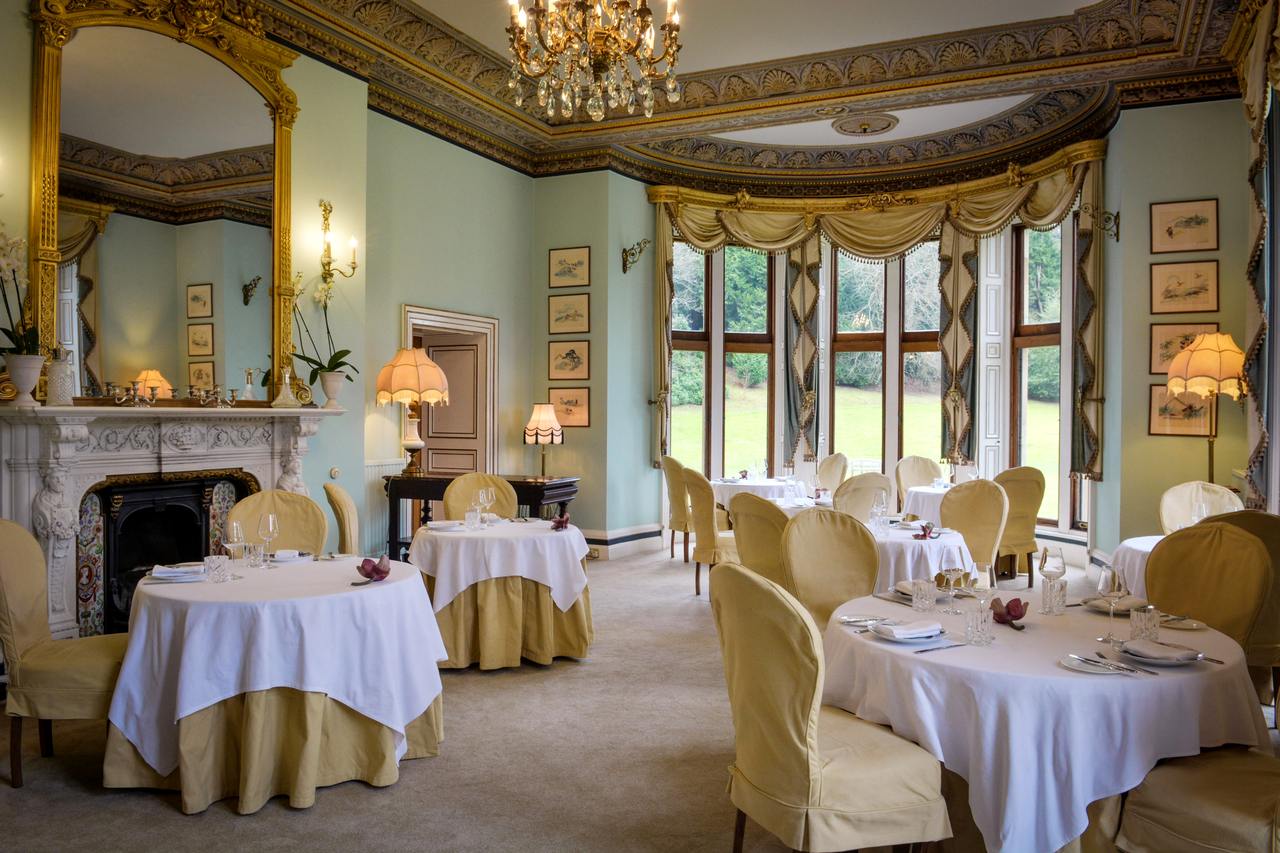 Gareth Stevenson is the Head Chef who has earned Palé Hall a Michellin Green Star. His amazing food is served in the elegant Henry Robertson Dining Room restaurant. There is a small a la carte menu, but the tasting menus are magical.

The tasting menu is a sensational flight of small plates with wine pairing. The five-course is as hedonistic as it is delicious, and I imagine the eight-course is even more so, though I noted a dish featuring eels which I don’t relish.

Some dishes we enjoyed included an Imam bayildi, a Turkish dish of roasted mullet with saffron sauce, and charred aubergine and sultanas paired with a Gabriëlskloof Chenin Blanc from The Landscape Series Elodie 2018. Welsh Black sirloin with baby mushrooms and turnip was paired with a hefty, oaky 2016 Dominus Napanook Cabernet Sauvignon (14.5%) from California’s Napa Valley.

There’s a Bistro too for dishes such as cod and chips and steak and chips – stylishly served – and of course a cooked breakfast. One morning we ordered a full Welsh breakfast – well it was only right, surely? It comes with Welsh bacon, Welsh sausages, eggs as you like them and the defining ingredient laverbread cake – made of crispy seaweed.

Importantly, there is an ornate bar with plenty of Welsh gin, Welsh vodkas and Welsh whisky. “We are not racist” explained bartender Nicholas, “we are just proud”.

“We are not racist, we are just proud”.

The room looks out onto the gardens and if you can, nab the table with two armchairs right by the windows for an afternoon tipple while enjoying the glorious view. 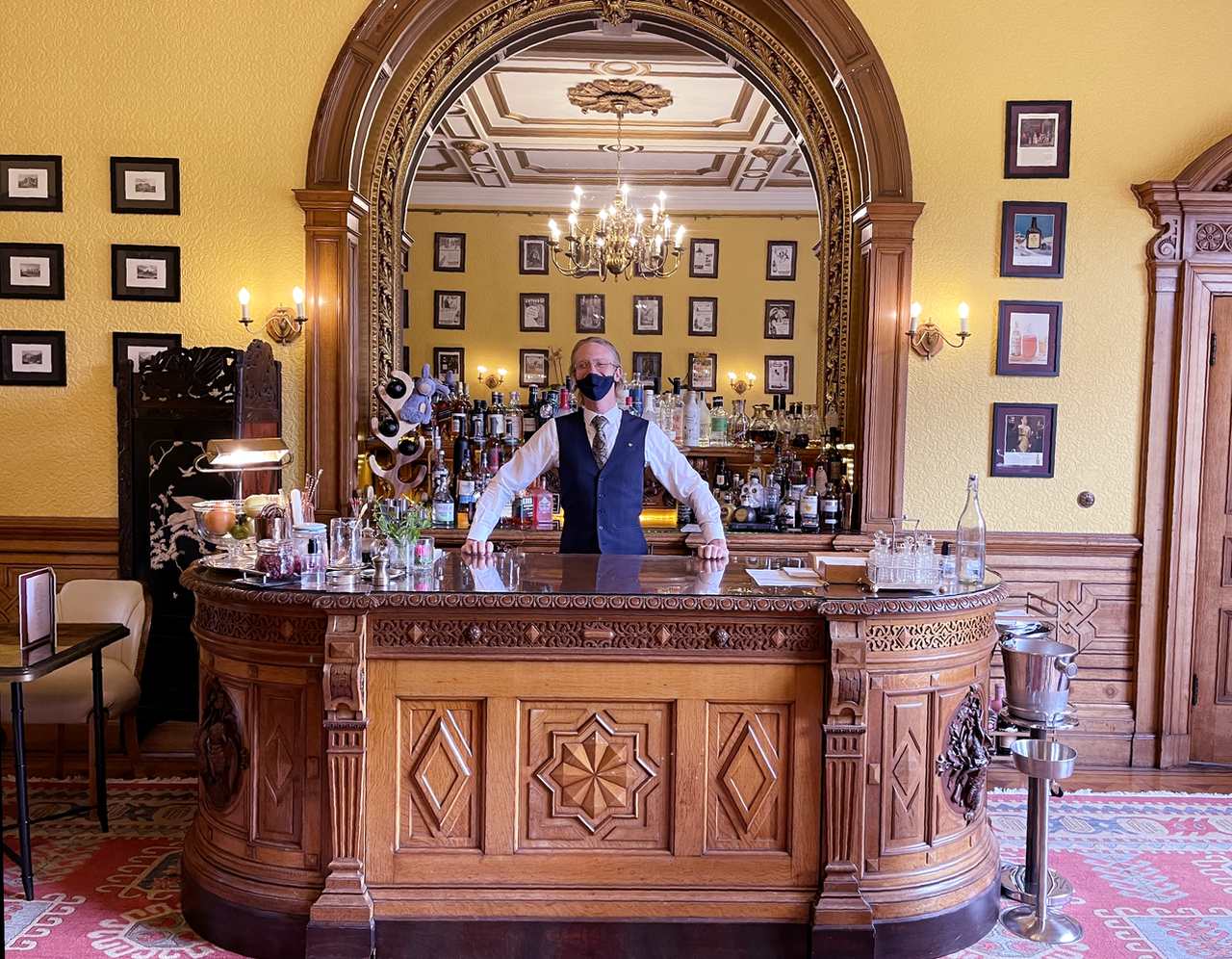 Ornate bar with a variety of Welsh gins, vodkas and whisky 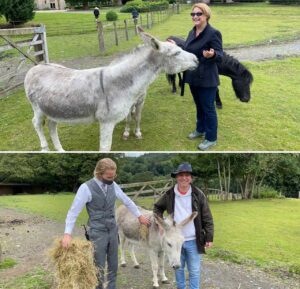 Mingling with the donkeys

There’s no spa but apparently, an in-room massage can be arranged.

We visited the rescued donkeys who live on the grounds and were given some carrots to feed them. Walking around the lush grounds was relaxing, watching rabbits bounce around, squirrels doing their thing and nodding at the sheep as they checked us out from the surrounding farms

Room service is efficient and we were offered newspapers every morning as well as a daily turndown service. There is wi-fi but to be honest it was patchy.

An overnight stay at Palé Hall costs from £245 for two sharing a Classic Room (£122.50pp), including breakfast.

To get there you pass moody mountains, the odd waterfall and verdant scenery. It’s quiet, it’s green and begs to be discovered on foot or by bicycle. You can hire electric bikes to help with the undulating landscape.

Snowdonia national park is a short drive away and many choose to climb the 4.7 miles to reach its peak while others prefer to climb aboard its famous rack-and-pinion railway service from Llanberris station to the zenith. There’s a cafe there and being the highest point in Wales you get some brilliant panoramas.

Thirteen miles away is the Italiante village of Portmeirion – it’s as beautiful as it is eccentric and those of a certain age will have seen it in the iconic series The Prisoner.