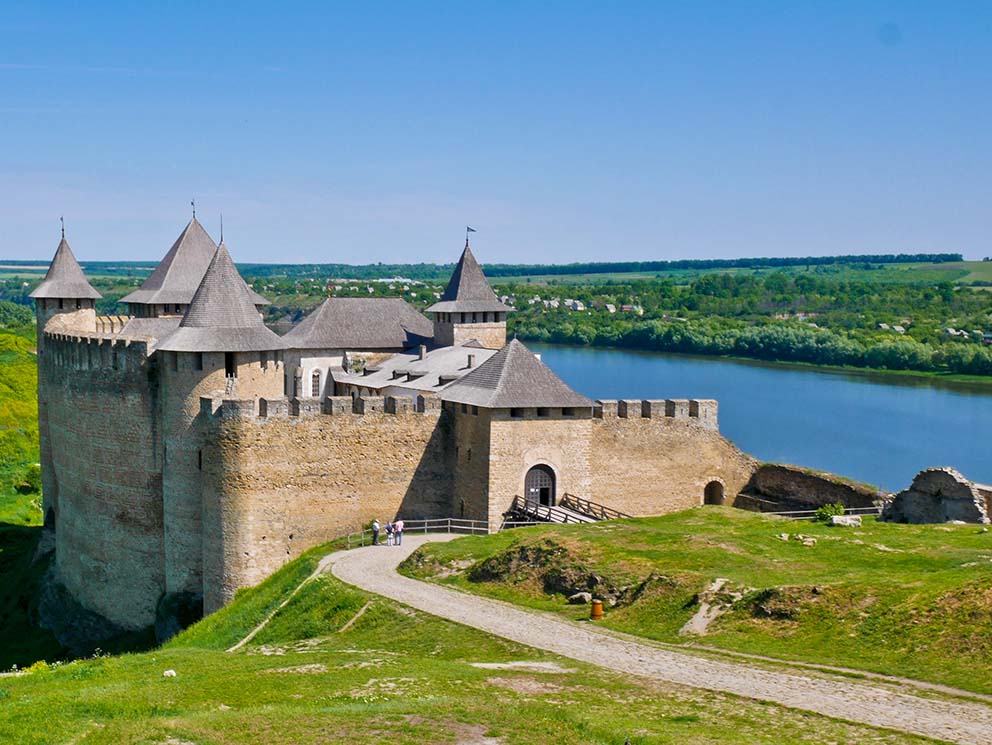 Ukraine, the country famous for banning Hollywood Steven Seagal from visiting, is opening up to tourism with visa-free travel. Add to that direct flights from the UK and the fact that it is still remarkably good value for money, this is as good a time as any to visit. We suggest you get behind the wheel or a hire car or indeed to hop on a train. 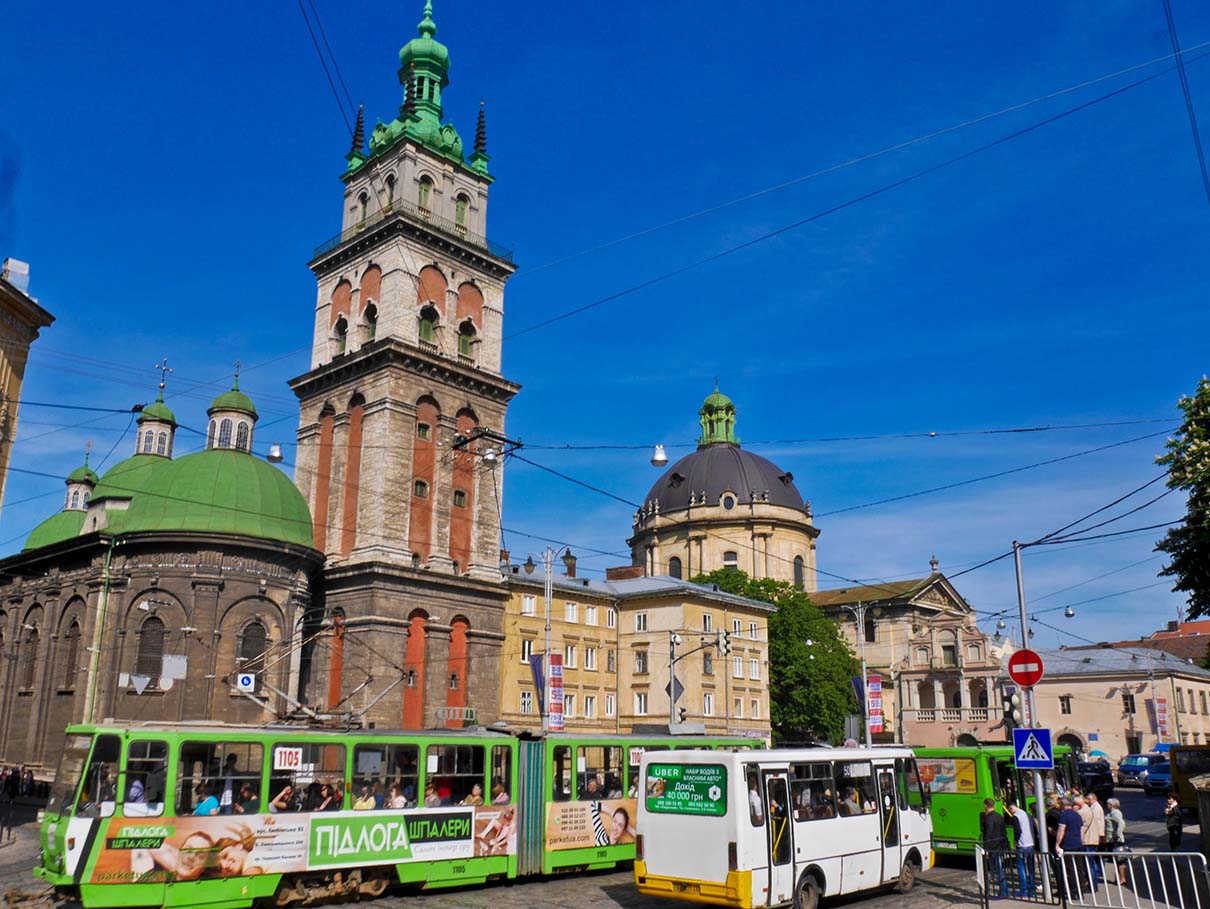 Situated in the far west of the country, just 50 miles from the Polish border, Lviv was known as Lemburg when it was part of the Austro-Hungarian Empire from 1772 to WW1. That’s reflected in its quaint cobbled streets, proliferation of churches and architecture reminiscent of those other Hapsburg cities like Vienna and Budapest. Of course it also has trams, trolley buses and coffee houses. Indeed they say that the first coffee shop in Vienna was opened by an Ukrainian from Lviv in 1686.

It’s a pleasant place to wander round, with street musicians on every corner, and the Market Square in the old town is lined with renaissance houses. The elaborate Lviv Opera House still stages productions of opera and ballet and imposing Cathedrals beckon you inside. My visit coincides with National Embroidered Blouse Day so everyone is sporting one, men and women alike.

Outside the old town, the 18th-century Lychakiv Cemetery has ornate tombs, chapels and shrines plus a special section dedicated to those who are still being killed in the armed struggle on Ukraine’s Eastern borders. Most Ukrainians I speak to believe that it’s Russian mischief making and can’t understand why their former ally is making trouble. Central and Western Ukraine show no signs of the war, so travellers shouldn’t be alarmed. 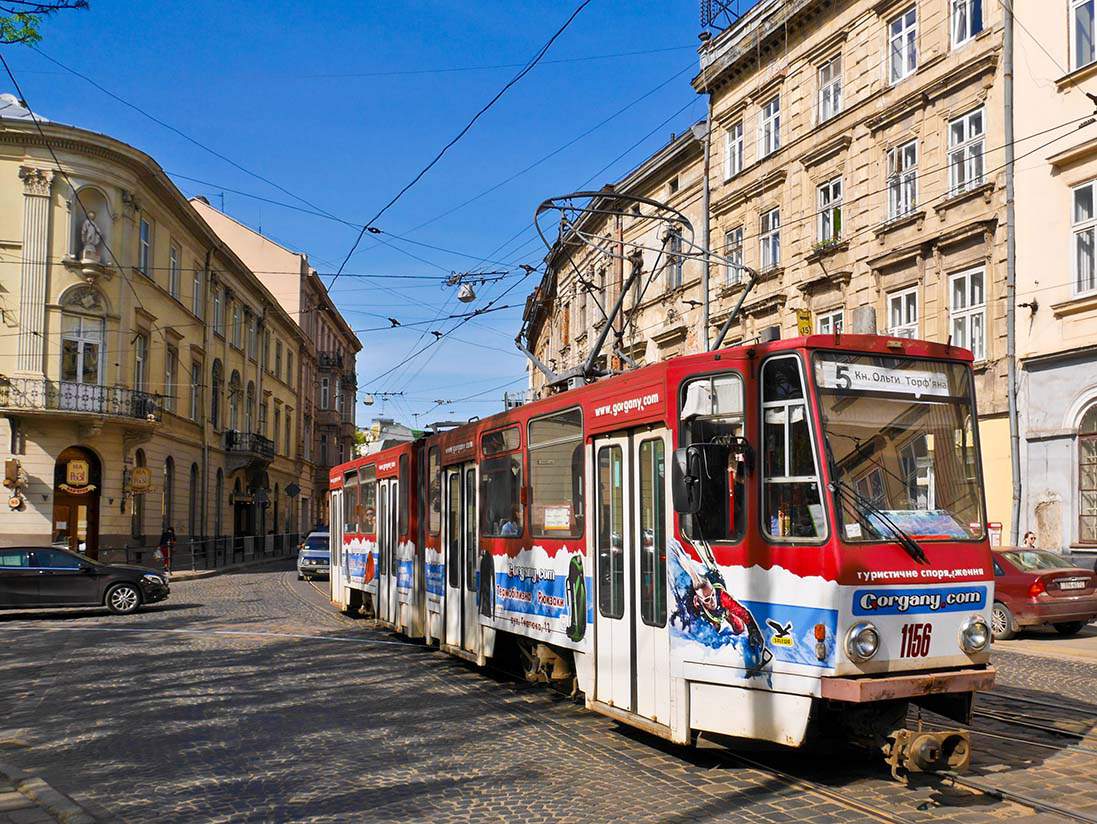 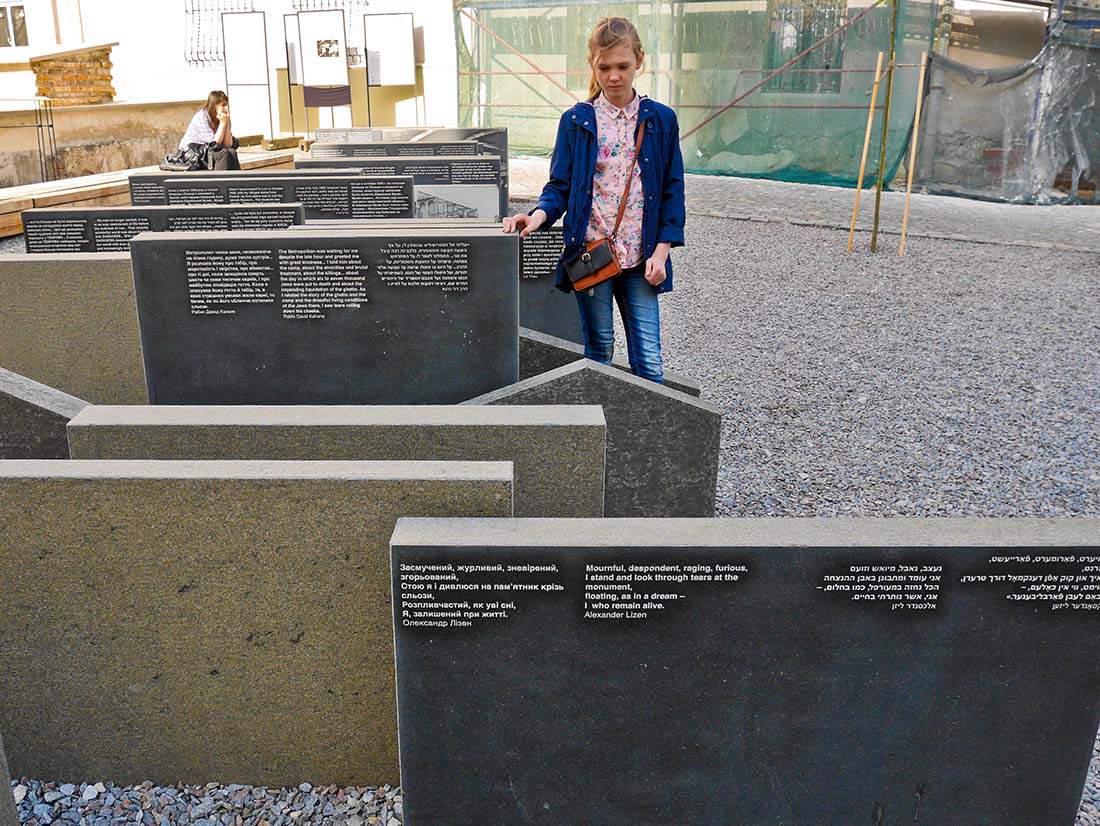 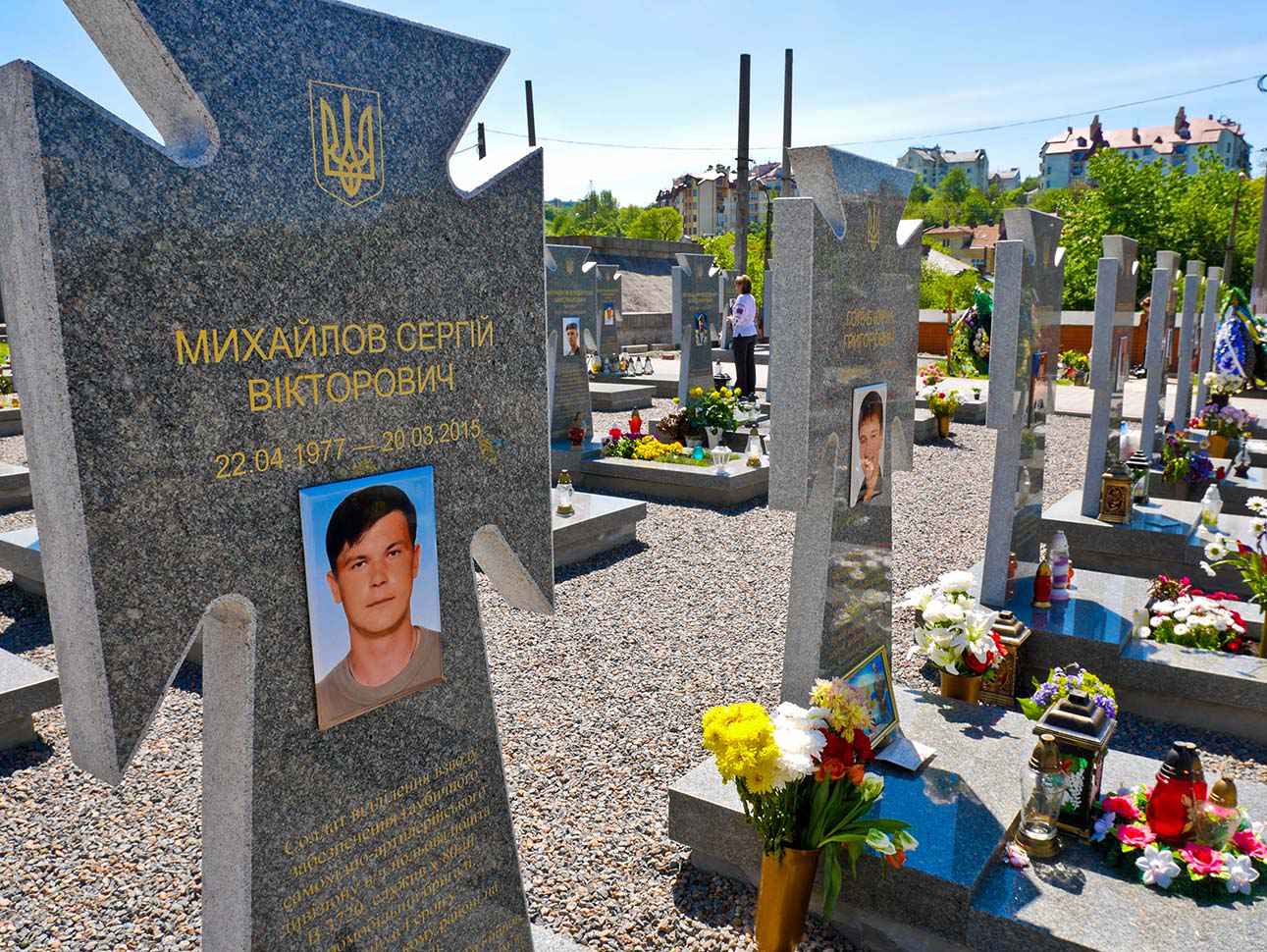 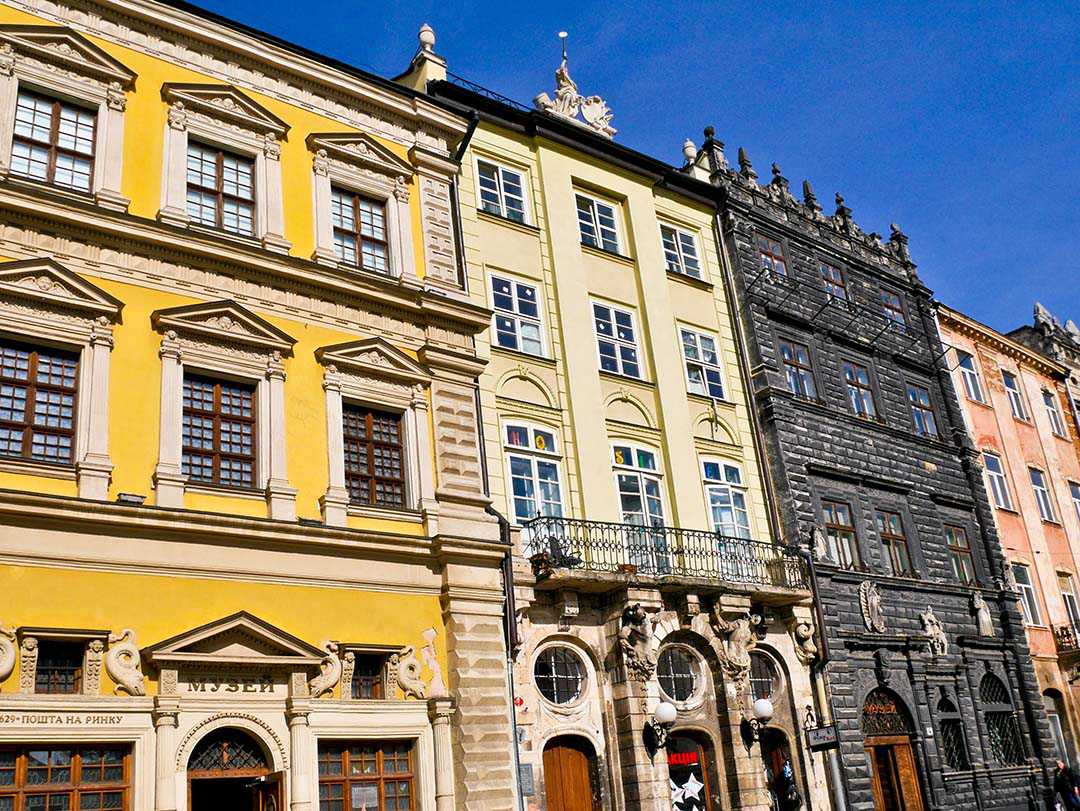 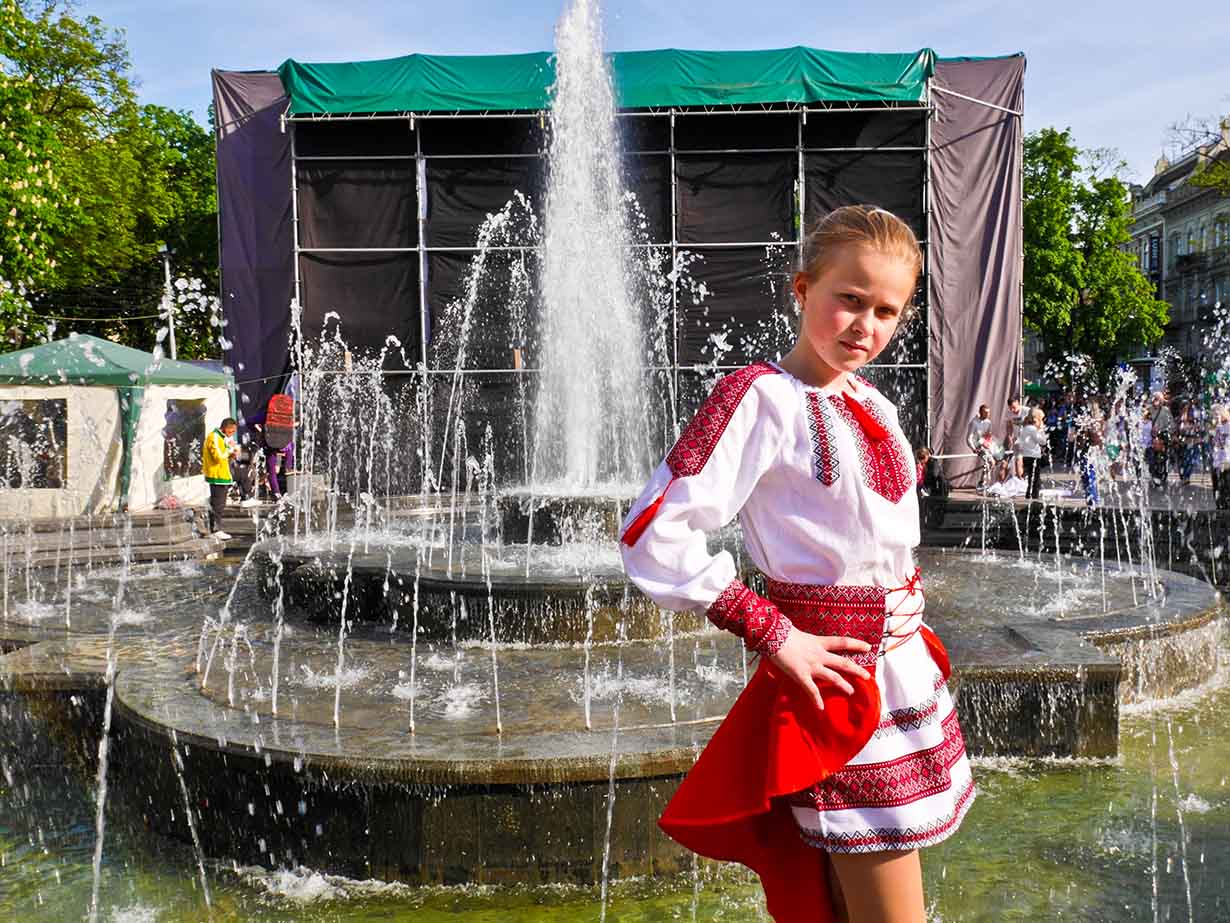 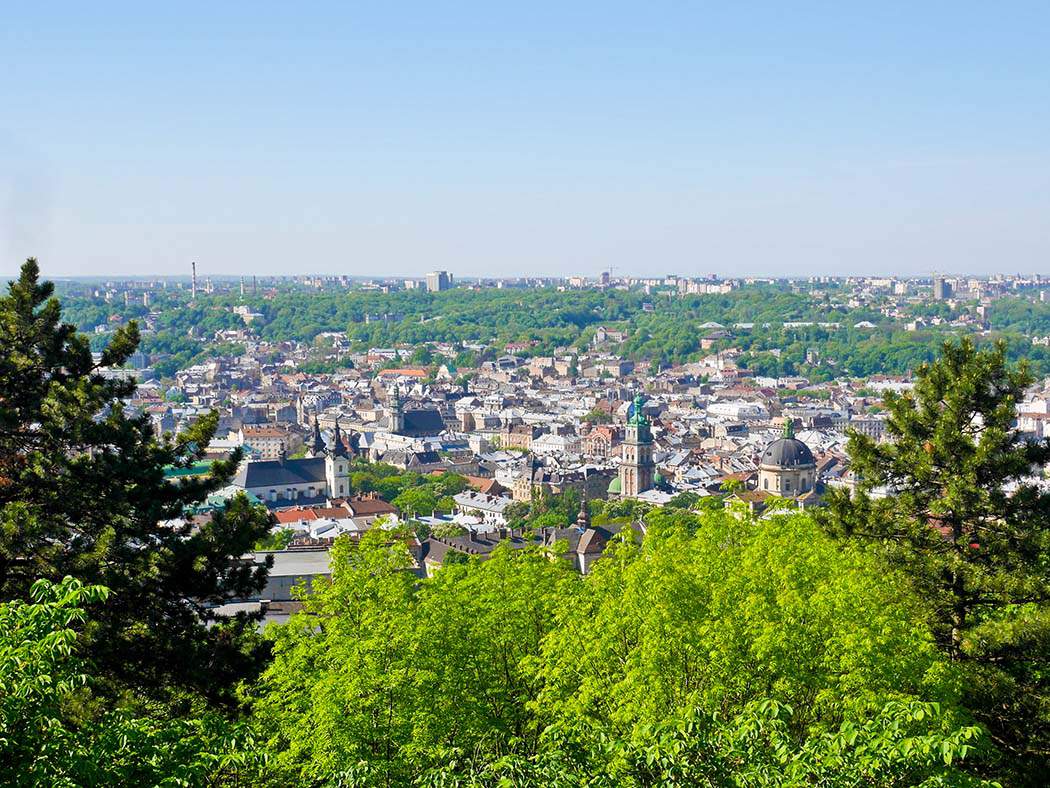 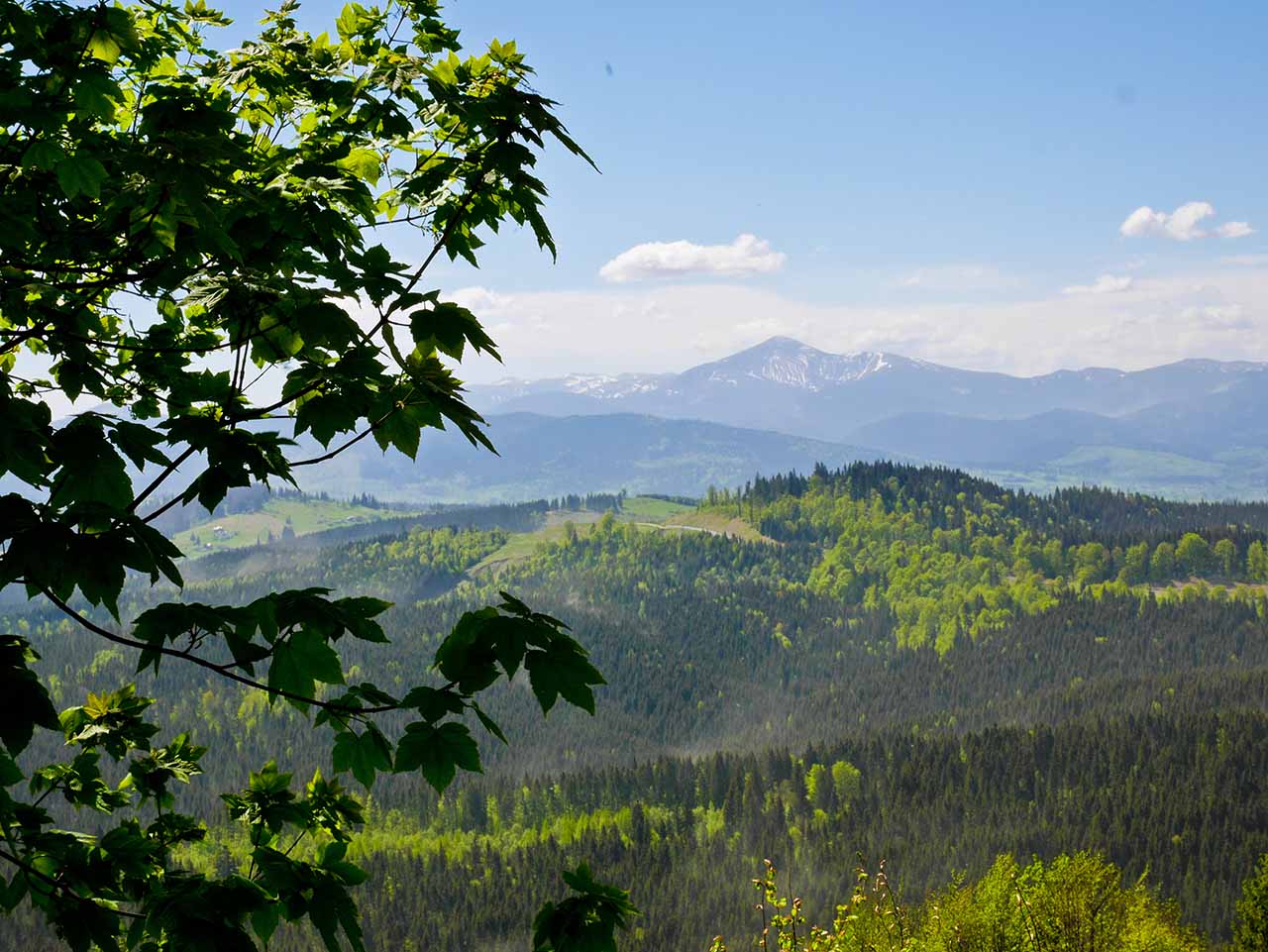 The Carpathians form an arc running roughly 1000 miles across Central and Eastern Europe, making them the second-longest mountain range in Europe. They occupy the South West of Ukraine, separating the country from Romania, with the highest peak, Mount Hoverla, reaching over 2000m. Life carries on here much as it’s done for centuries and during the Soviet period was left almost untouched. Even guerrillas fighting their Russian oppressors stayed holed up here for years. 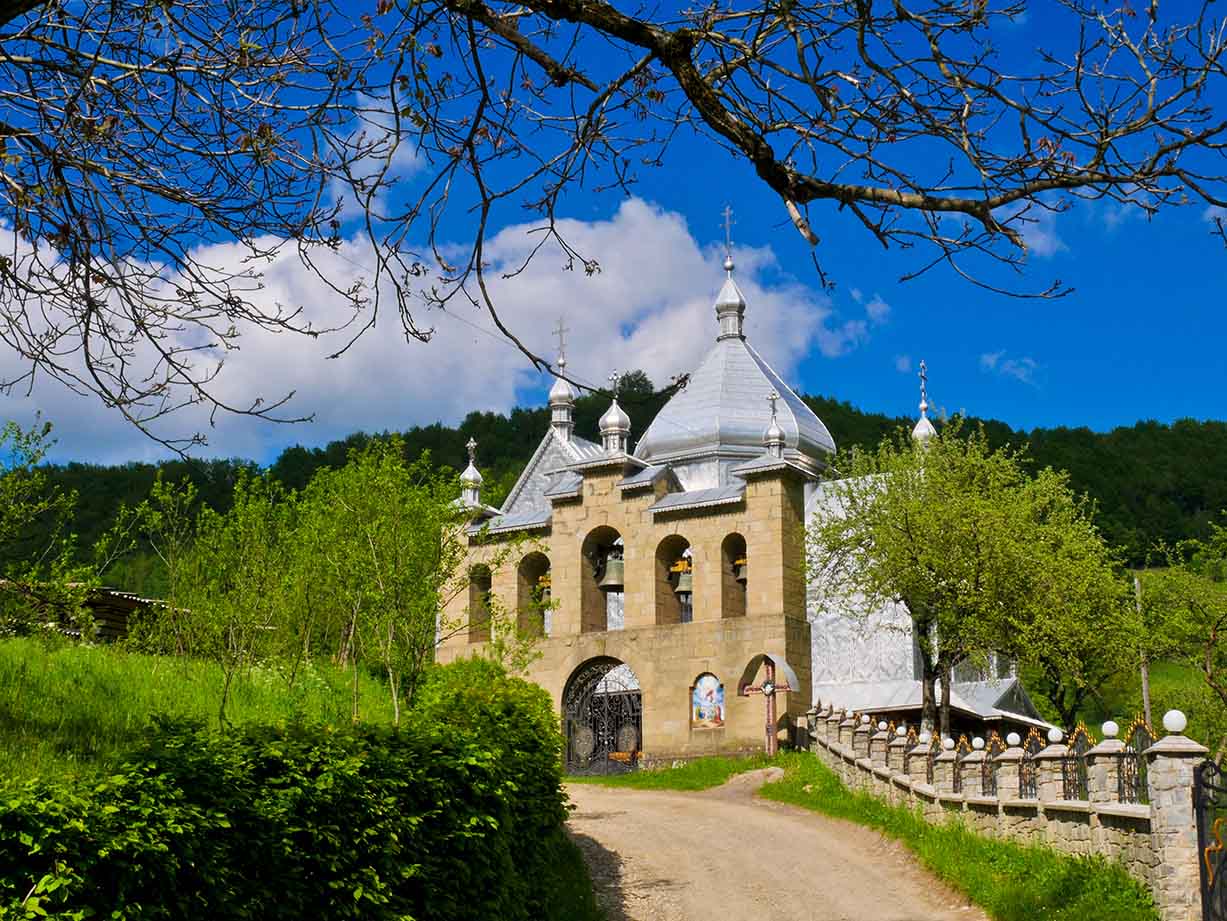 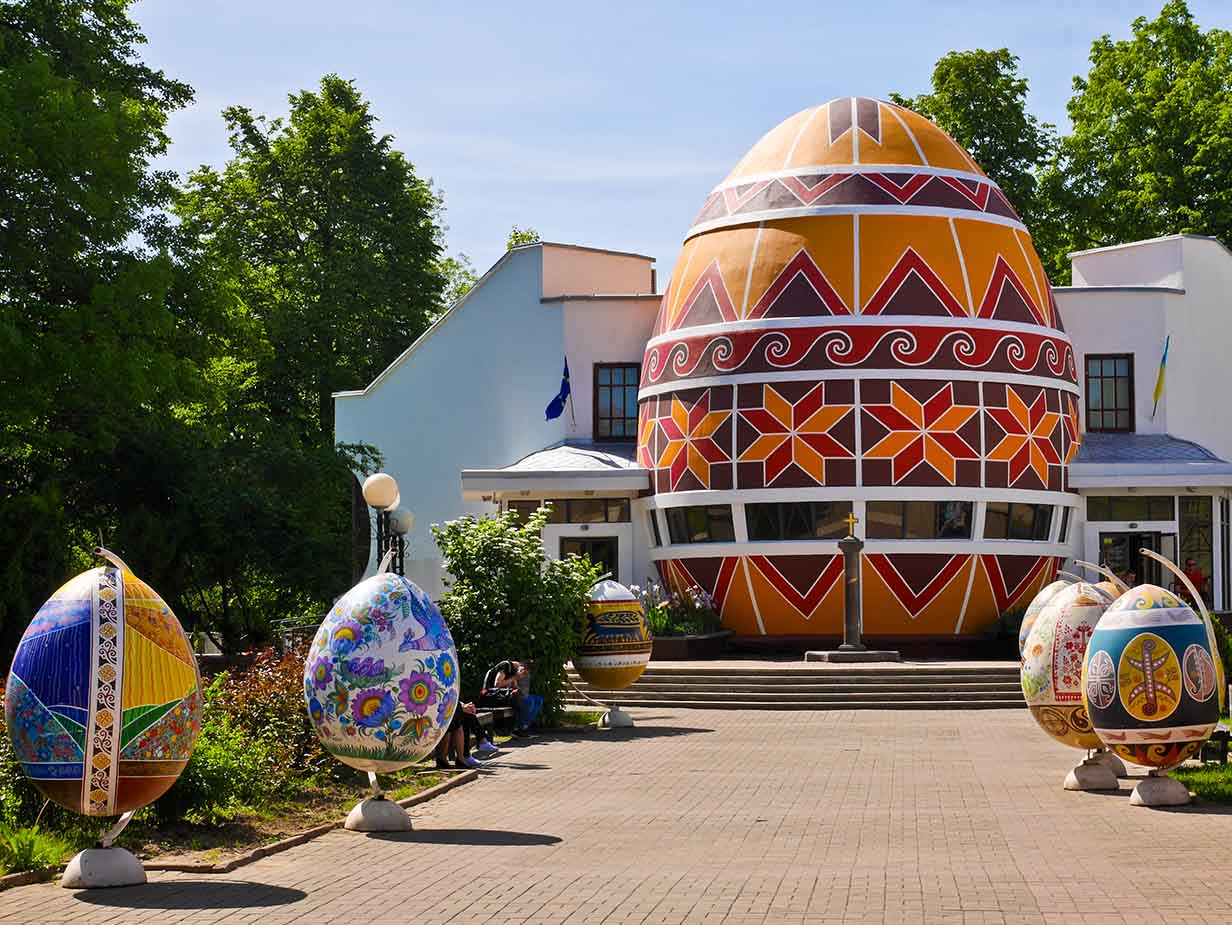 It’s a three hour drive across the Ukrainian steppes to Kolomyia, famous for the world’s only Pysanka or Easter Egg Museum. Of course it’s built in the shape of a giant egg and houses an impressive collection of intricately decorated specimens from all over the world. Nearby is another museum dedicated to the Hutsuls, the largest ethnic group in the Carpathians, scattered through both Ukraine and Romania. It’s an excellent introduction to their culture with an exhibition of ethnic costumes, arts and crafts. 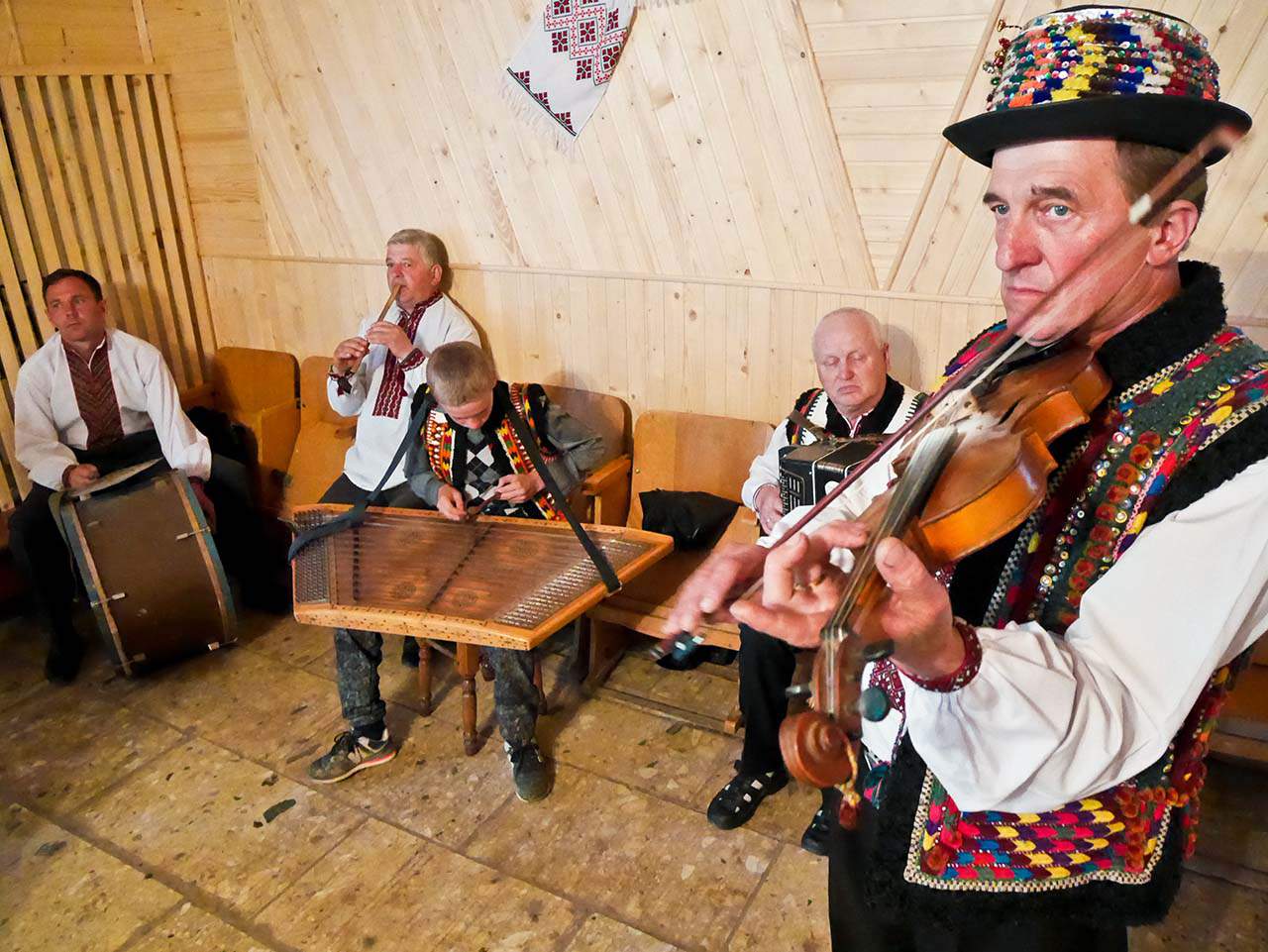 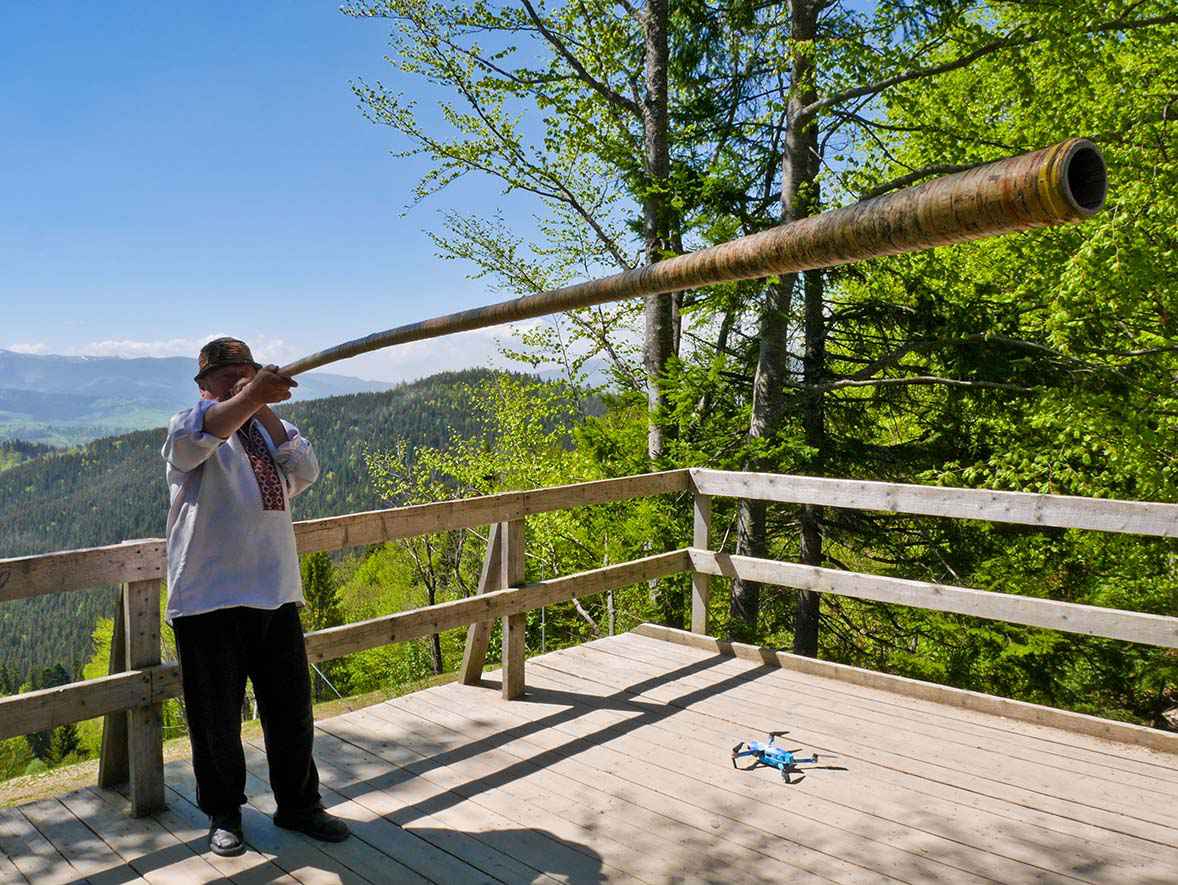 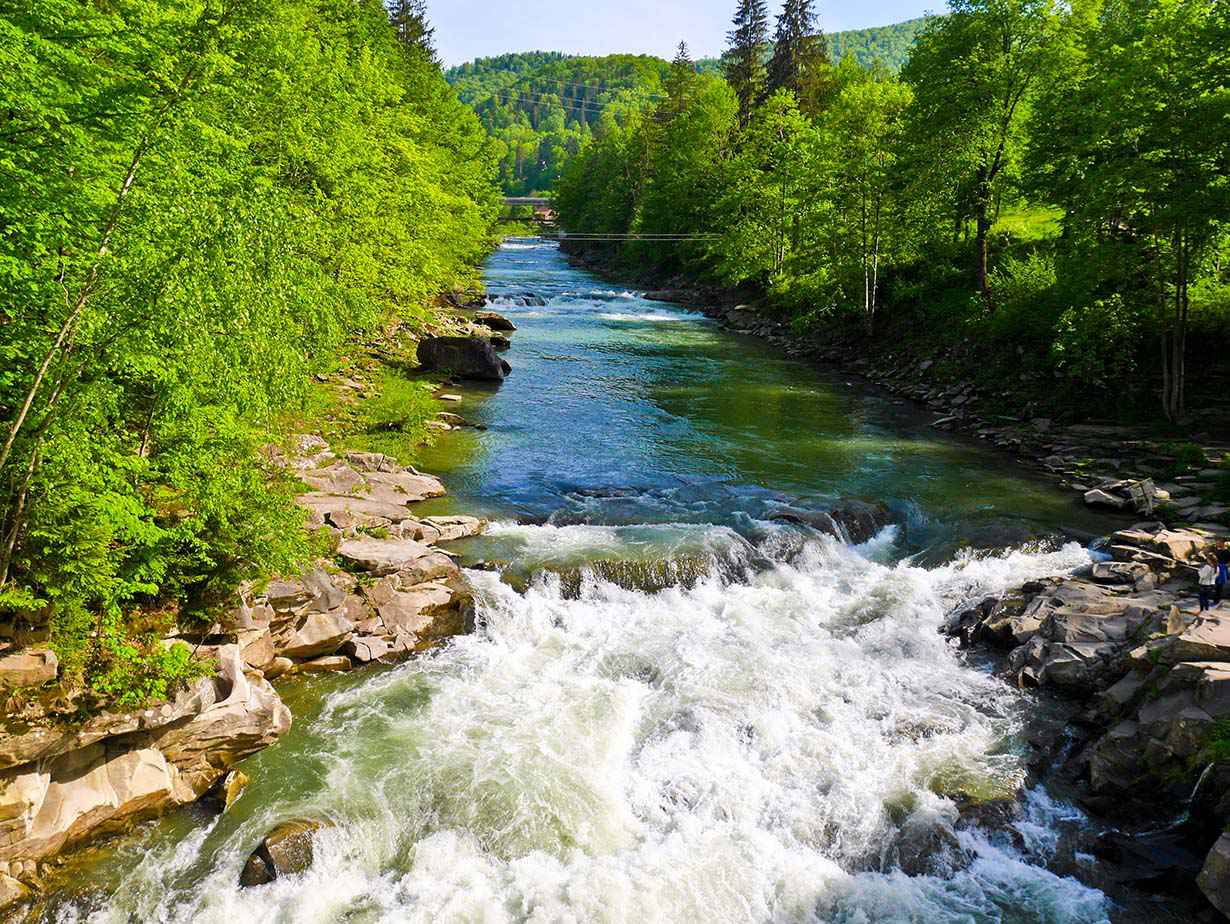 The landscape begins to change as I climb up to the town of Yaremche at 580m. The wide cornfields give way to forested hills, wooden houses and quaint chapels by the side of the road. The River Prut runs through the centre of town in a series of rapids, and there’s a rather tacky craft market on either side of the ravine. However if you’re in the market for woolly slippers or dodgy fruit wine, this is the place for you. 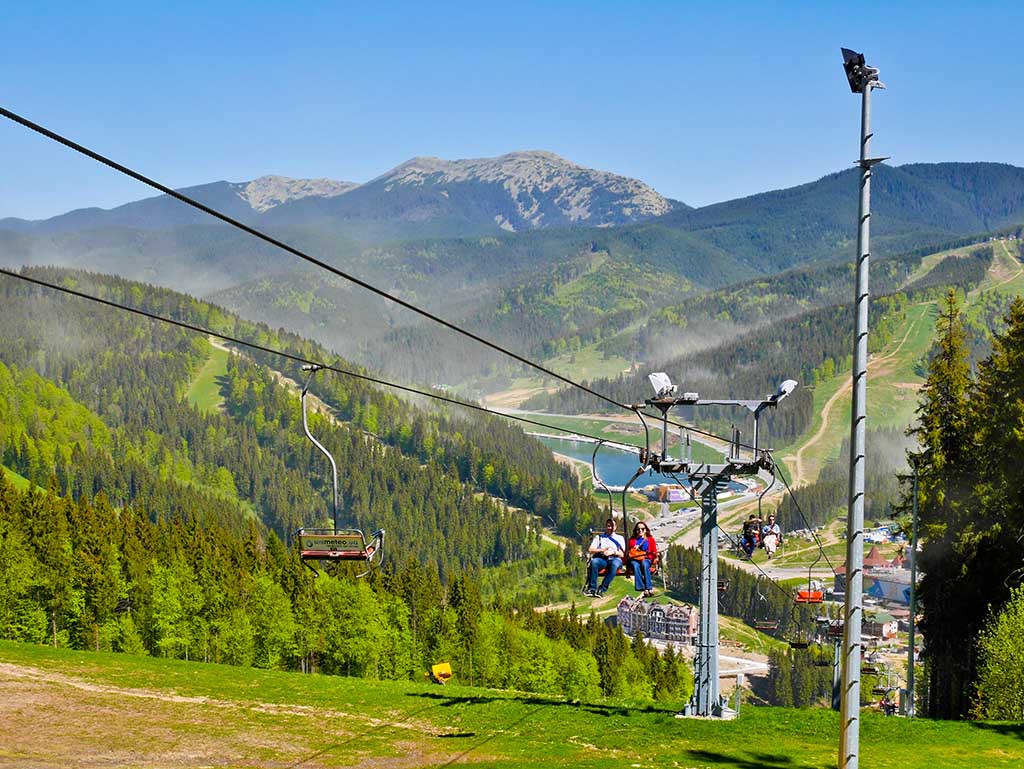 Another 40 minutes of climbing brings me to Bukovel, the largest Ski resort in Eastern Europe at 900m. It opened in 2000 and has 16 ski lifts with roughly 30 miles of pistes, and more are promised. There’s a boating lake but otherwise there’s not much character here. A few of the ski lifts remain open and, at the top of one of them, there’s a rather terrifying Roller Coaster Zip line which hurls you high through the trees. I prefer a spot of gentle hiking.

I head deeper into the Carpathians and the roads worsen, potholes everywhere and rickety bridges to traverse. The railway arrived in the 1880’s, attracting tourists with fresh mountain air, and Vorokhta is an attractive spa town. Further on, just outside Verkhovyna, is Kryvorivnia, a Hutsul village where the movie “Shadows of Forgotten Ancestors” was shot in 1965. It’s nothing more than a collection of attractive wooden shacks with a restored fortified Hutsul house, known as a Grazhda, filled with traditional artefacts. It’s Sunday and the singing from inside the tiny church drifts across the valley. 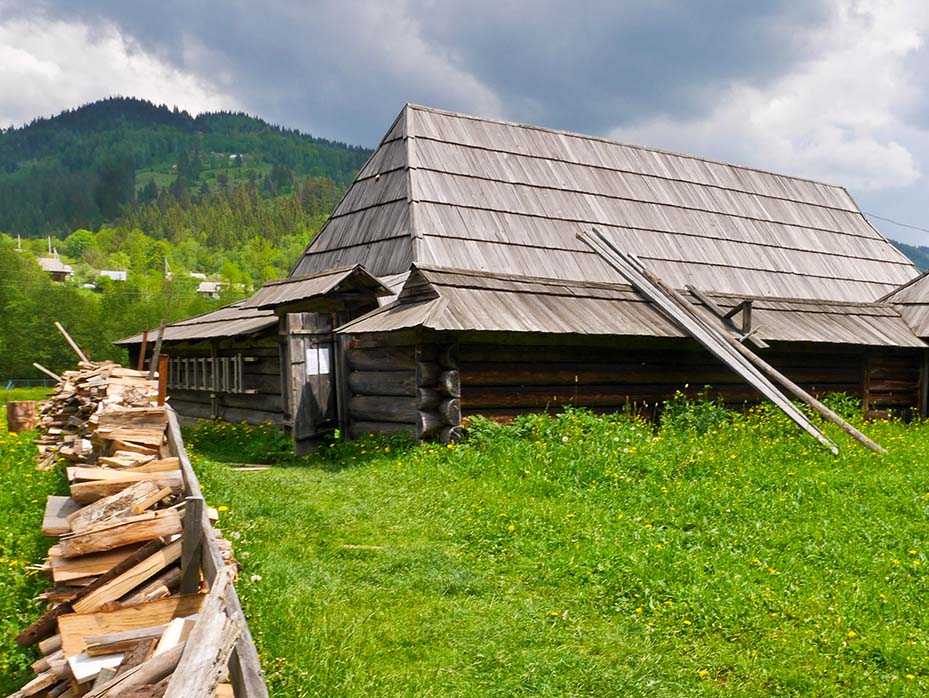 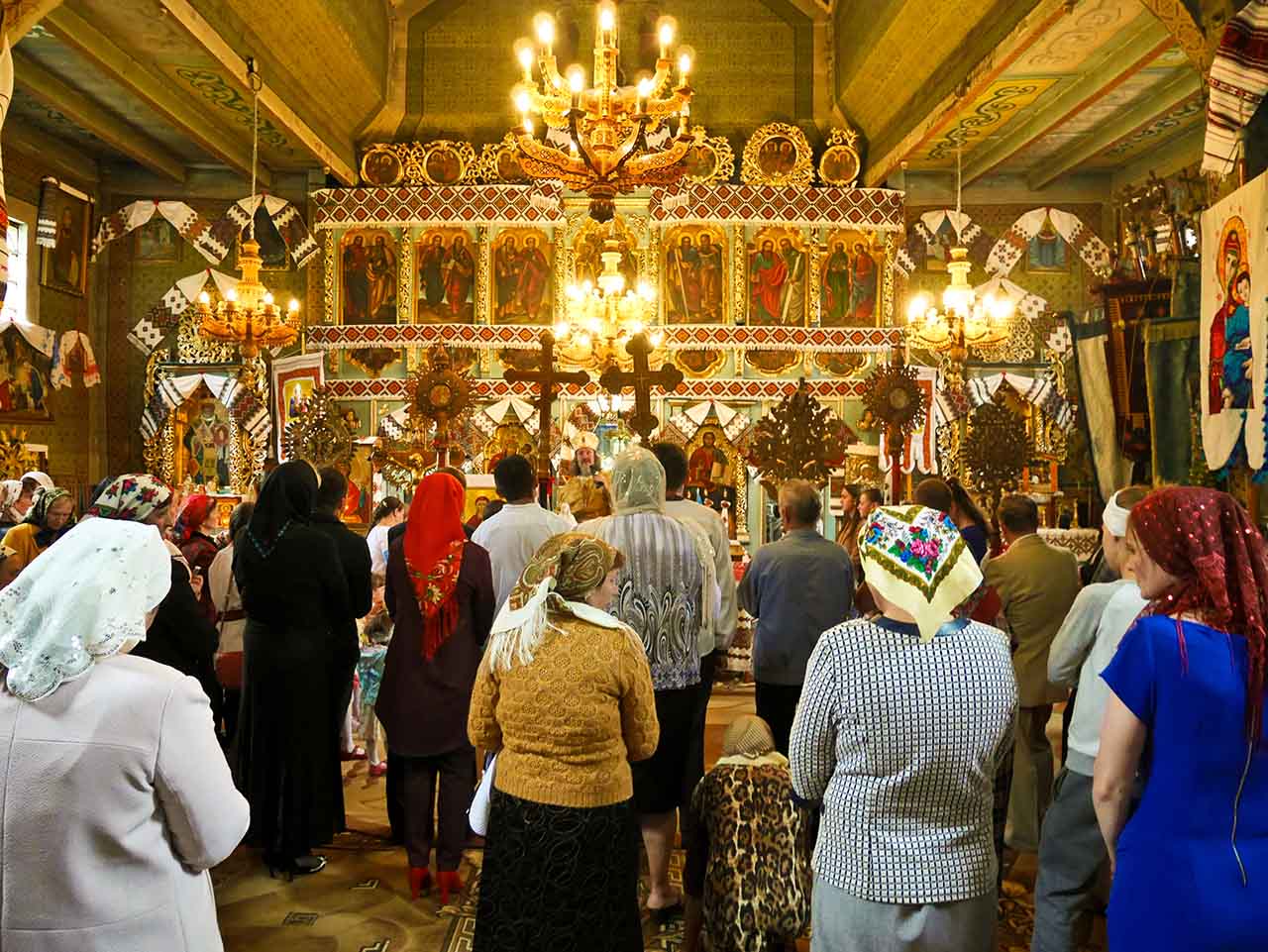 Leaving the mountains and journeying East, I come to the city of Chernivtski, capital of the region of Bukovina. Also a part of the Hapsburg Empire, it was known as Little Vienna because of its architecture is similar. It’s only 30 miles from Romania and, between the wars was part of that country. The Romanians were responsible for the city’s attractive art deco buildings. Chernivtsi University, a red bricked Moorish fantasy, with a Technicolor tiled roof, was built by a Czech architect in 1882, and is now a UNESCO World Heritage Site. 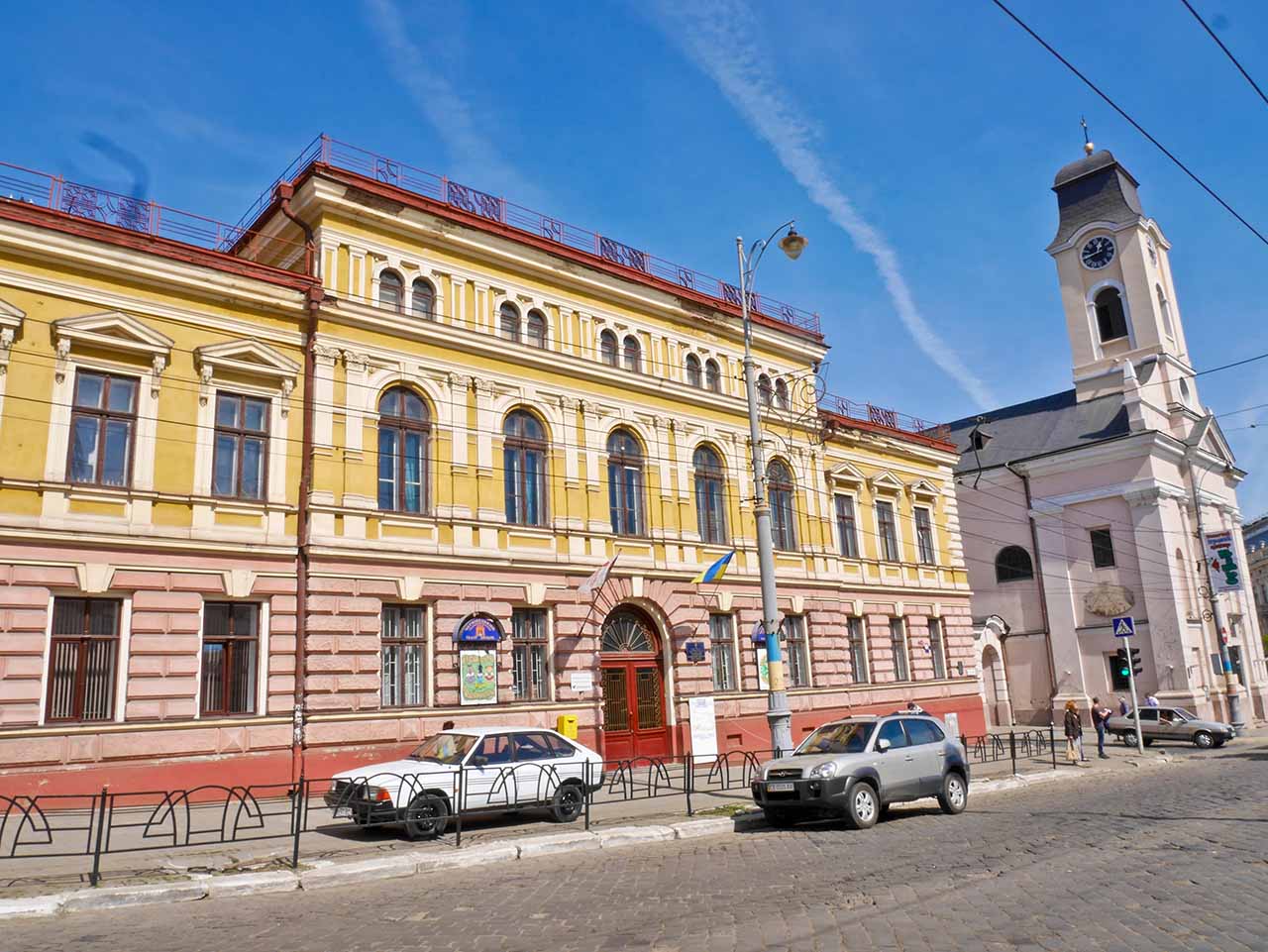 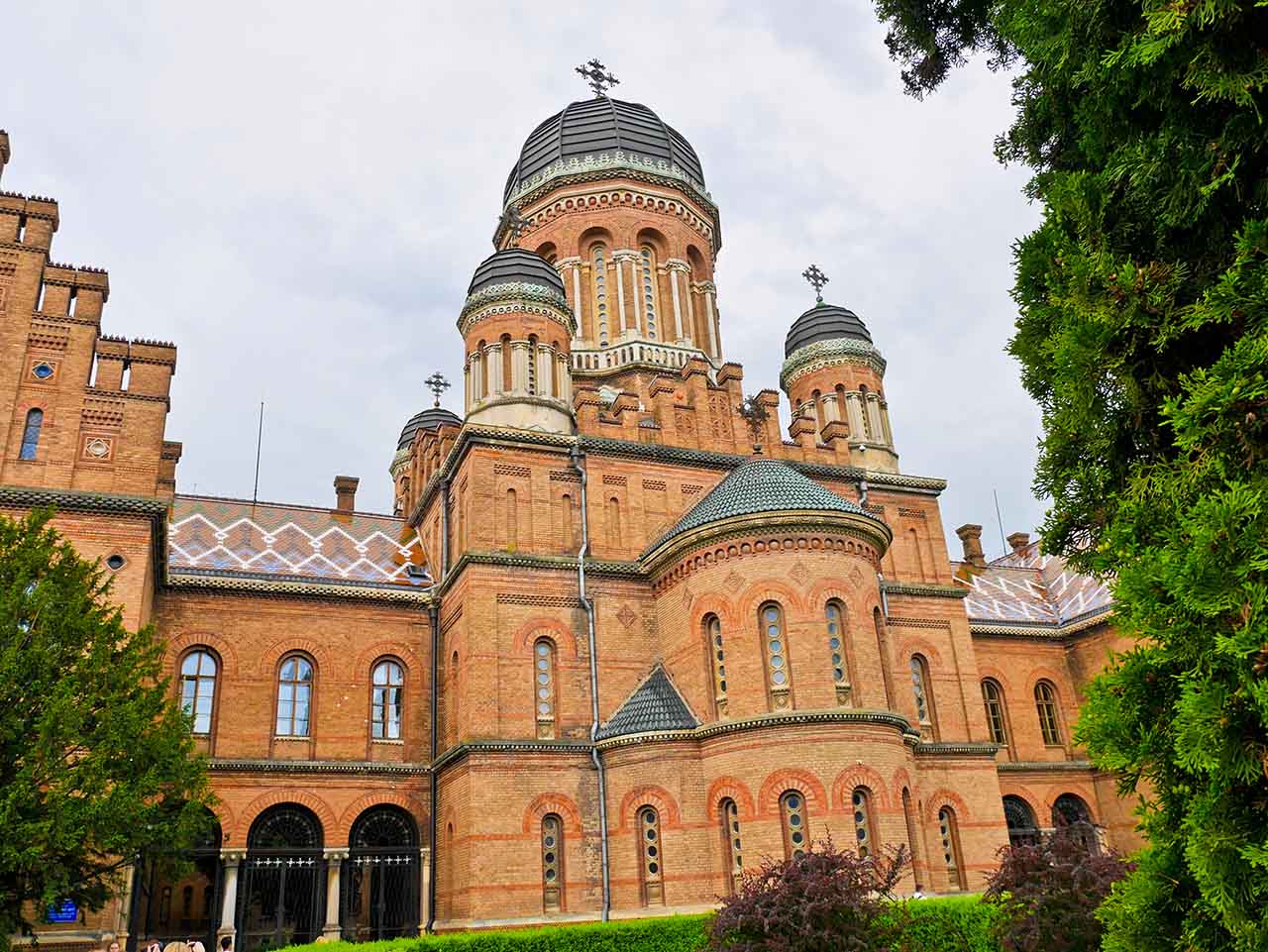 An easy day’s excursion from Chernivtsi, is the fairy-tale fortress of Khotyn, on a cliff overlooking the Dniester River. It was built around 1400 by the Moldavians but fell into Turkish hands in 1713. They kept it for another 100 years, until the Russians became the final owners. These days it’s been much restored but it’s still an impressive, with walls 40m high and 6m thick. It’s been the location for many feature films, including the Ukrainian version of Robin Hood. 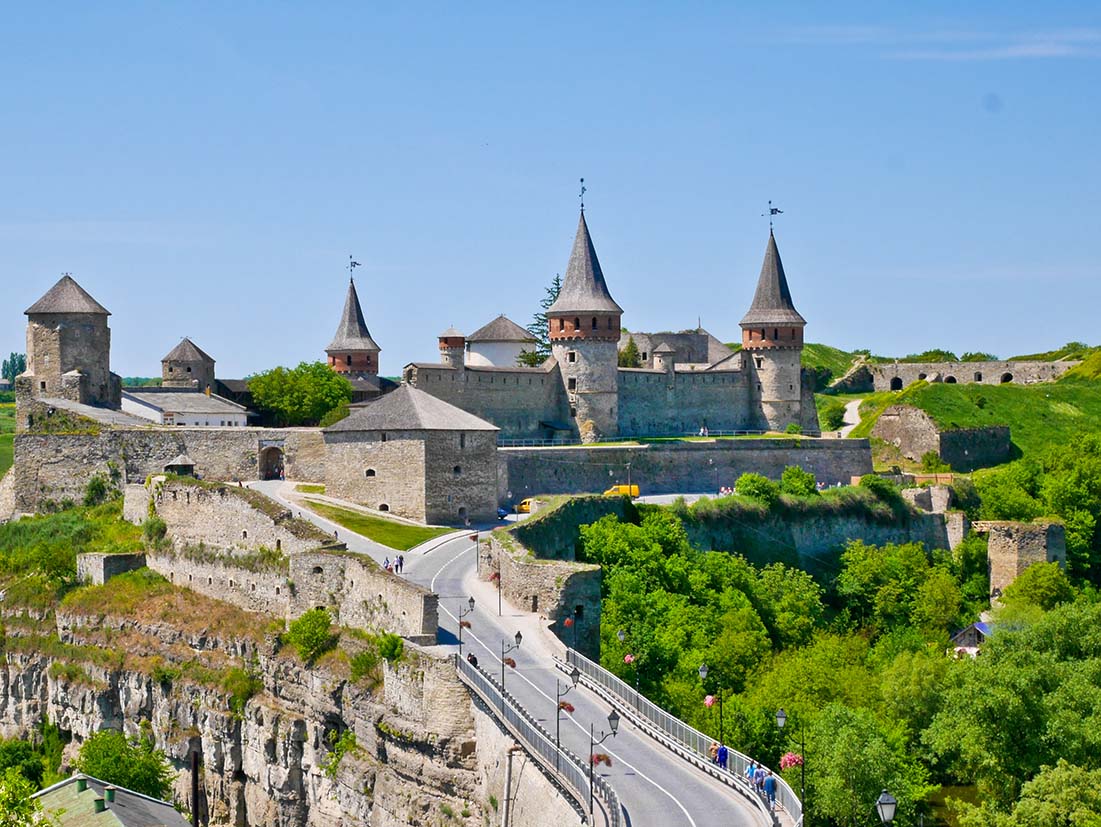 Nearby is another stunning fortress protecting the bridge connecting the medieval city, built on an island, with the mainland. The 14th century castle sits high above a bend of the Smotrych River, its steep cliffs forming a natural moat. It originally had as many as twelve towers but only a few remain today. It’s still relatively well preserved, however, and is one of the few medieval constructions left in Ukraine.

I catch the overnight train to Kiev, the carriages built in former East Germany and full of communist charm. It’s slow but comfortable, although all the windows seem to have been nailed shut. 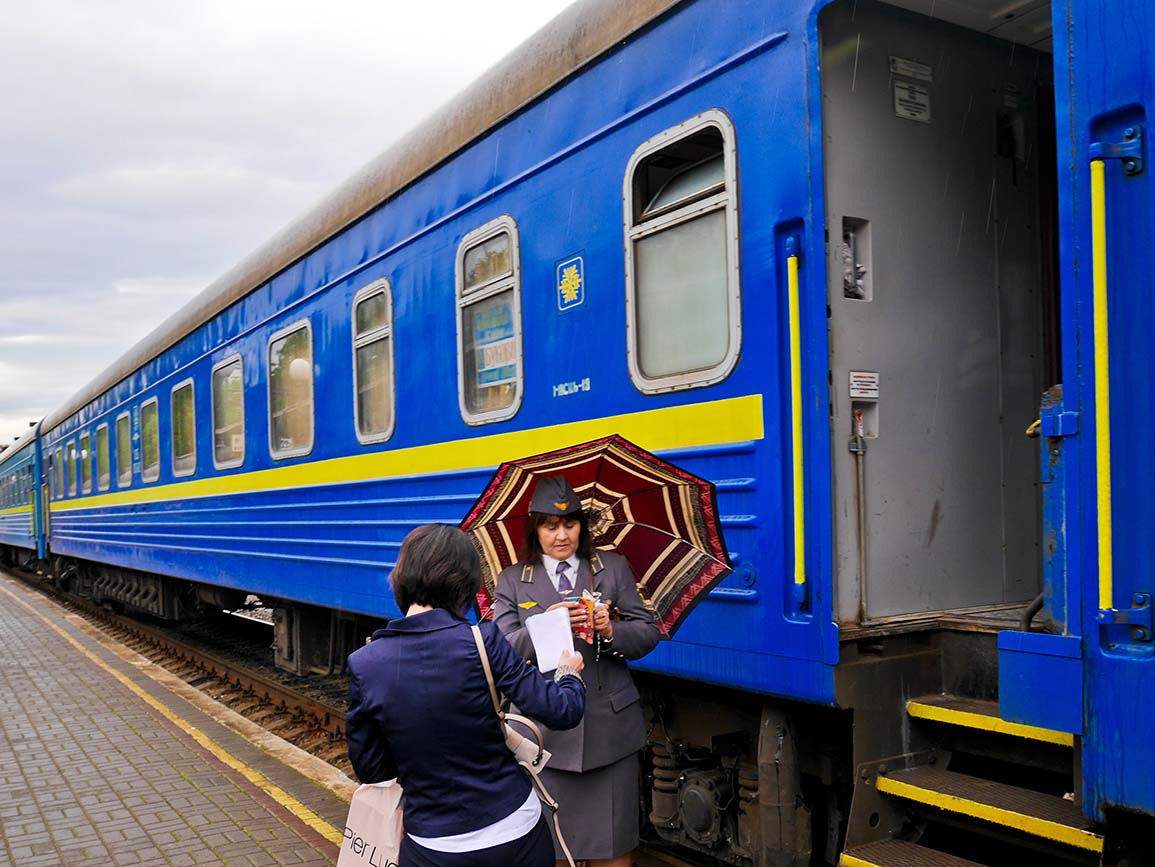 Ukraine’s capital city has wide leafy boulevards, onion-domed churches and relatively few of those dull Soviet architectural monstrosities. Since Ukraine’s independence many of the building have been restored and repainted as symbols of national pride.

Don’t miss the 1980’s reconstruction of the Golden Gates of Kiev or the 11th-century Orthodox cathedral of St. Sophia. I like the 19th century St. Volodymyr’s cathedral which was a museum of atheism during Soviet times. The big attraction is the Lavra Cave Monastery which is a complex of religious buildings with catacombs below contained mummified bodies of former monks. Nearby is the huge Motherland Monument, known locally as “Brezhnev’s Daughter”, 62m high, dominating the skyline. It’s part of the WW2 museum and you can climb up to the mother’s hand in an interior elevator. 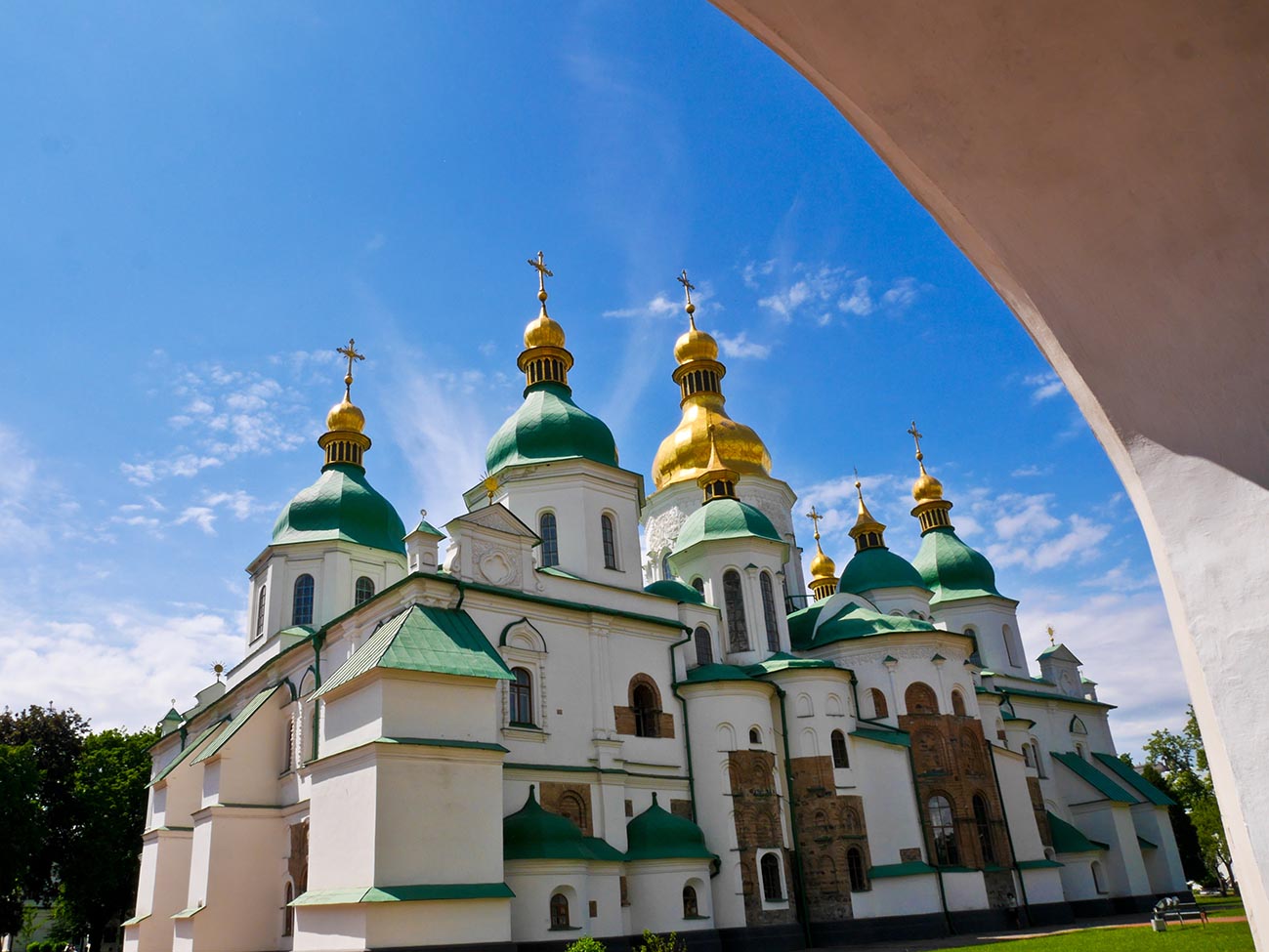 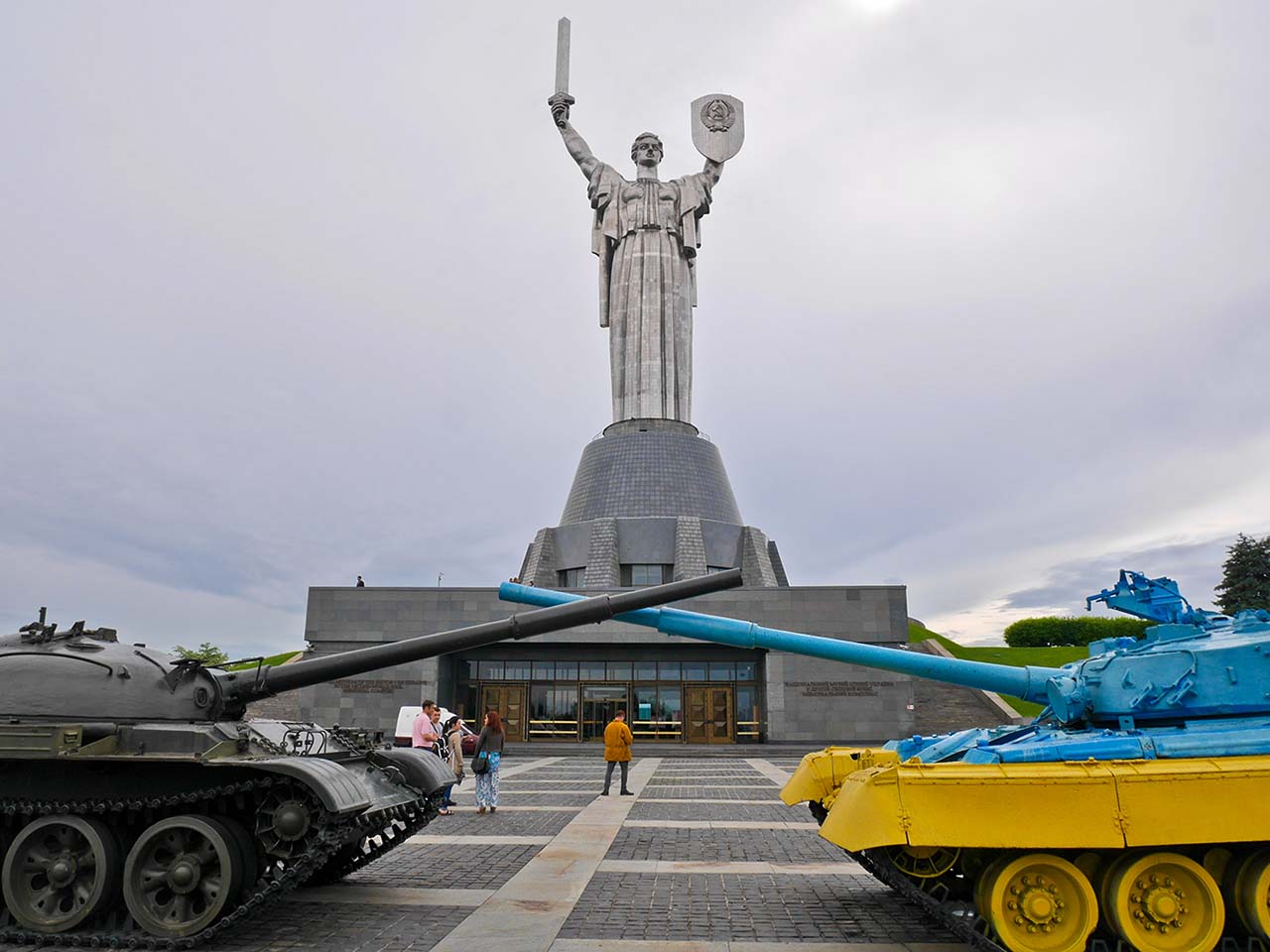 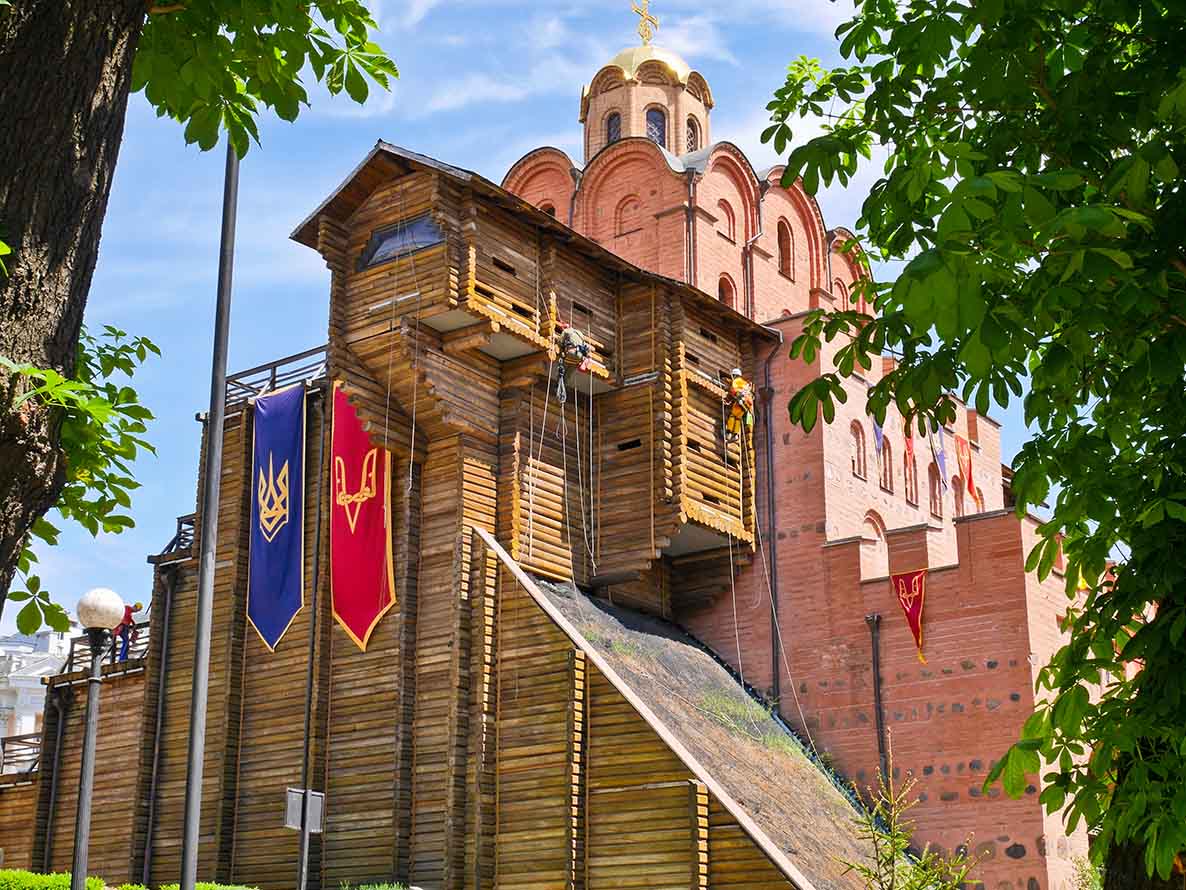 No visit to the city is complete without a walk around the Maidan Nezalezhnosti, the central square of the city and the venue for pro-democracy demonstrations in recent years. It’s a place of tragedy as over 100 people were killed by snipers in February 2014. As a result former President Viktor Yanukovych fled the country. Today, written in large letters on cladding covering building work, “Freedom is Our Religion”, is a slogan signifying that the struggle is still ongoing. 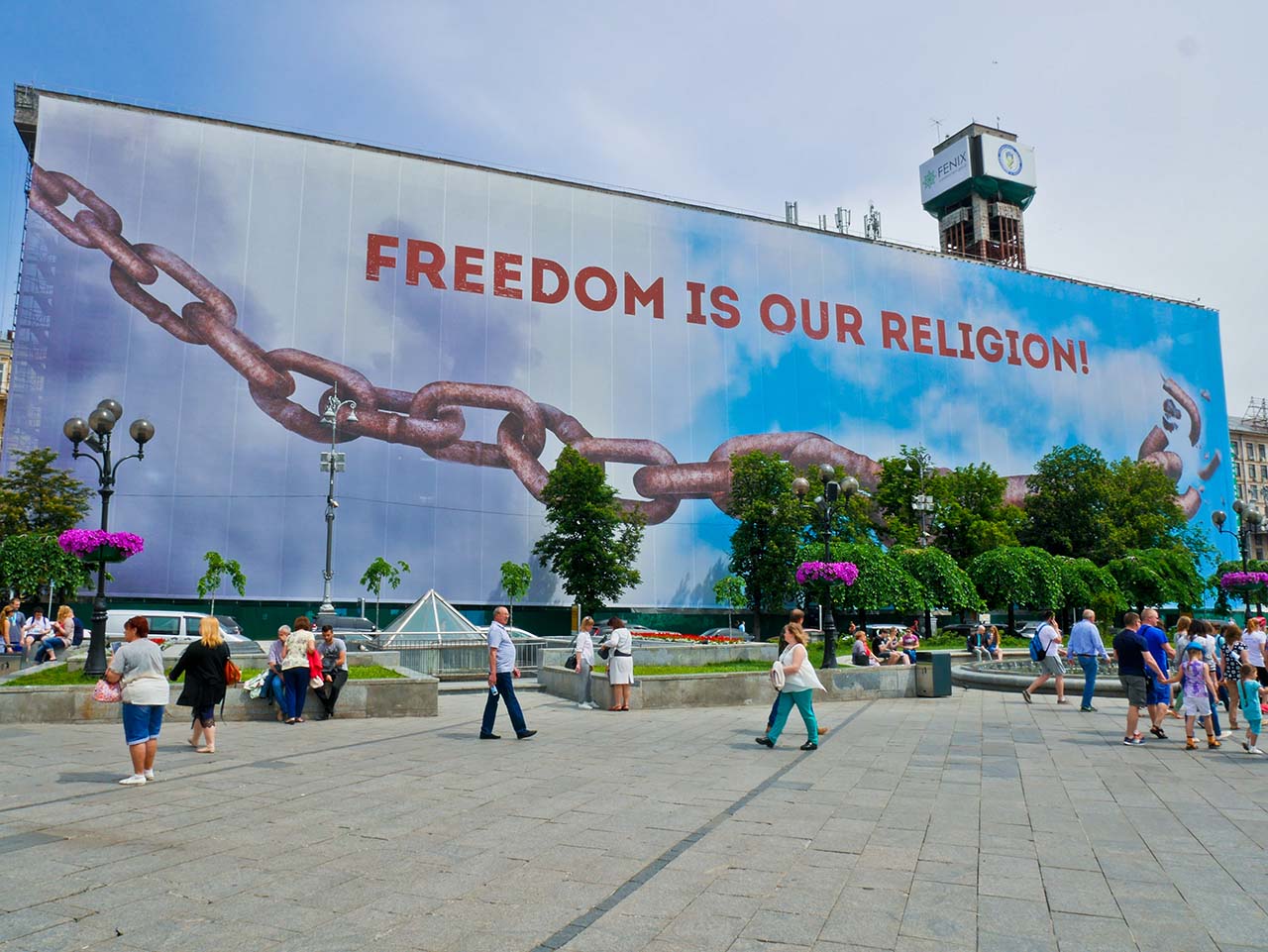 Although there’s a small museum dedicated to the nuclear disaster in Kiev, a day trip to Chernobyl is the best way to appreciate the scale of the tragedy. It’s perfectly safe, they say, and it’s around a two hour drive from the city. You pass through a 30km checkpoint before entering a 10km exclusion zone where you’re warned not to touch anything. The reactor now has a new shiny metal shell, but the town of Pripyat, once housing 50,000 workers, is slowly being swallowed by the forest. This is a ghoulish tourist attraction but a grim reminder of the dangers of nuclear power. 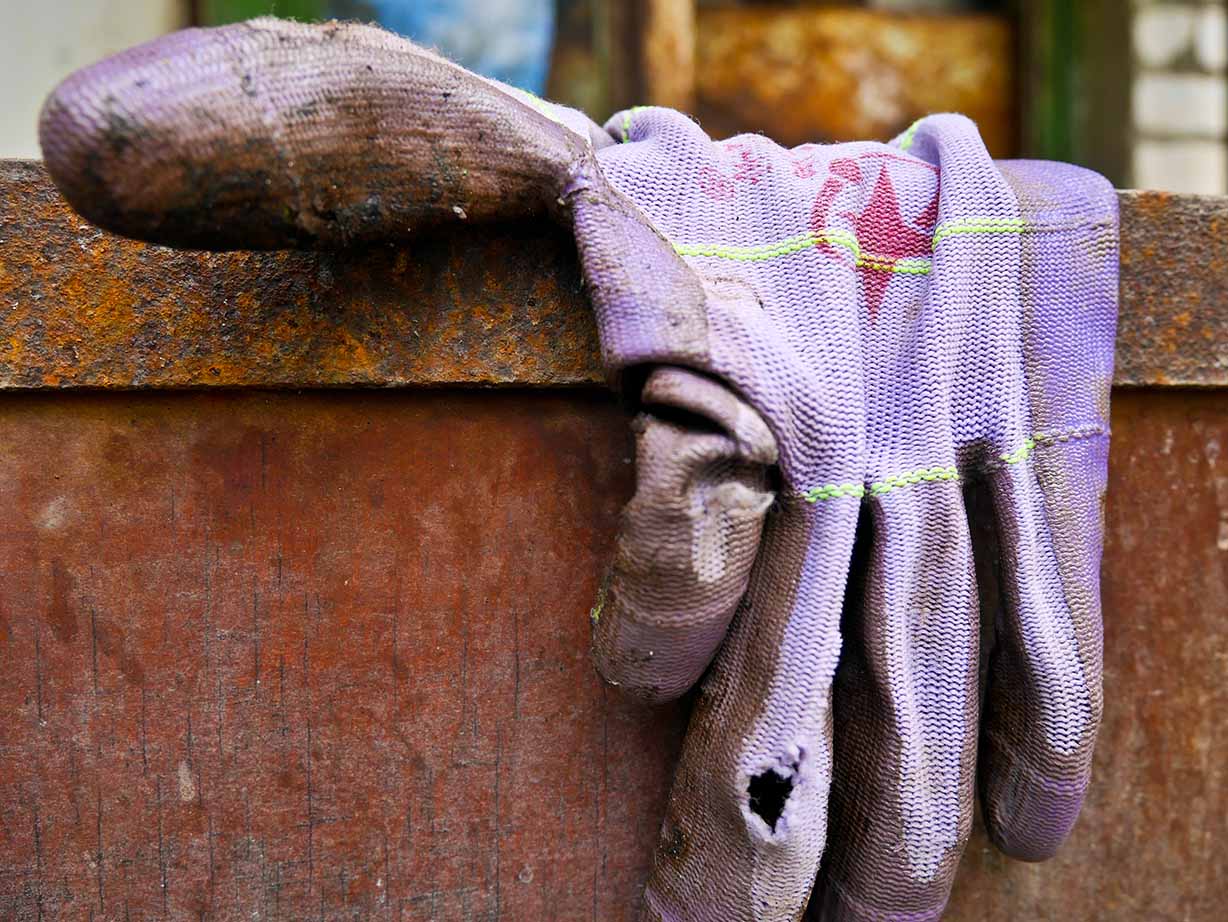 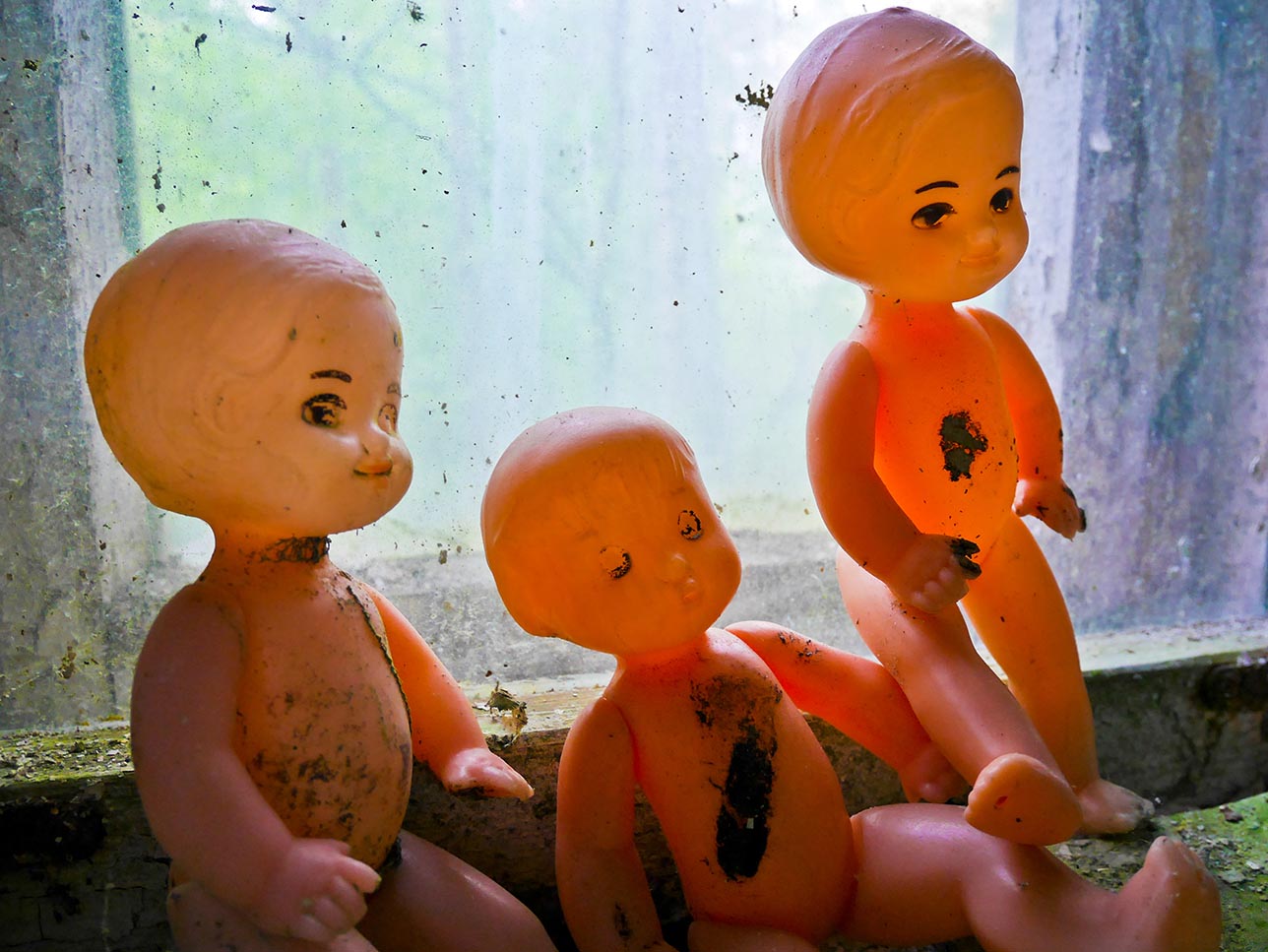 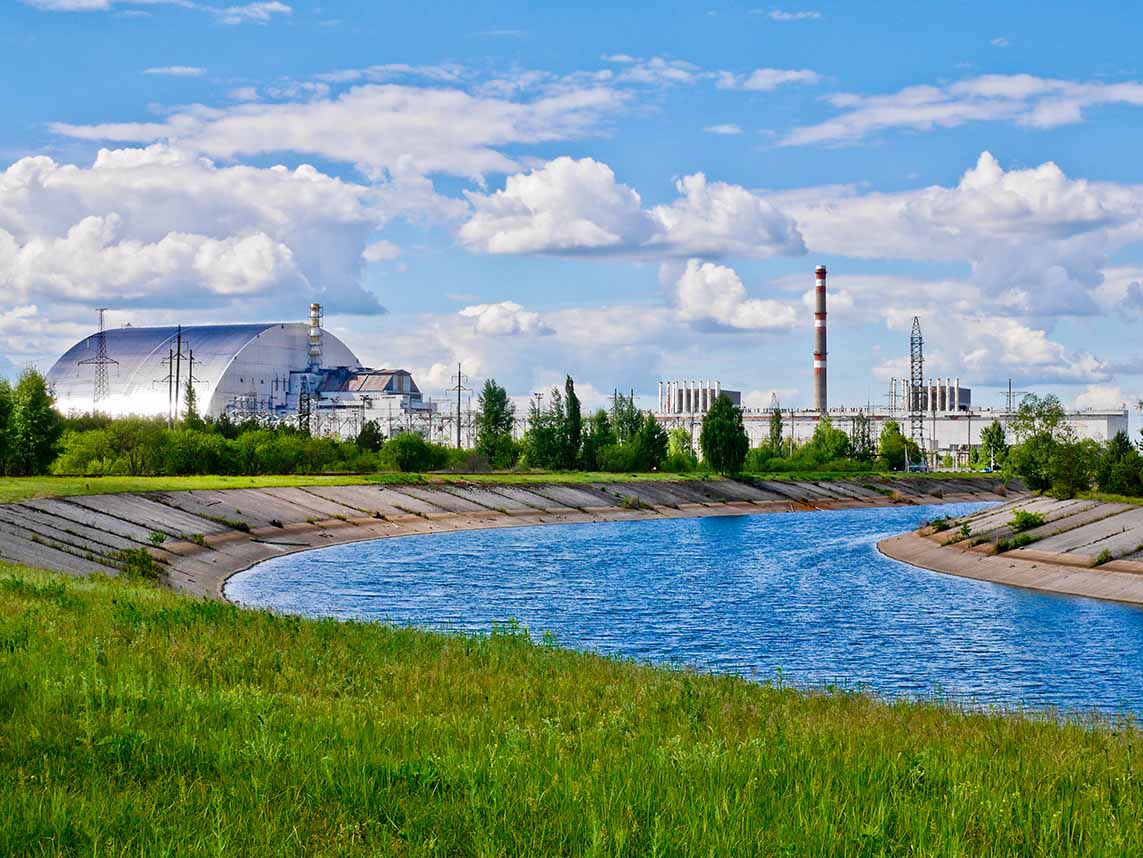 SoloEast can arrange tours of Chernobyl from Kiev.

Ryanair will start direct flights to both Kiev and Lviv in October.

Ibis Kiev City Center makes a good base in Kiev.

Yonda Smart car is so smart, it thinks it is a London tour guide