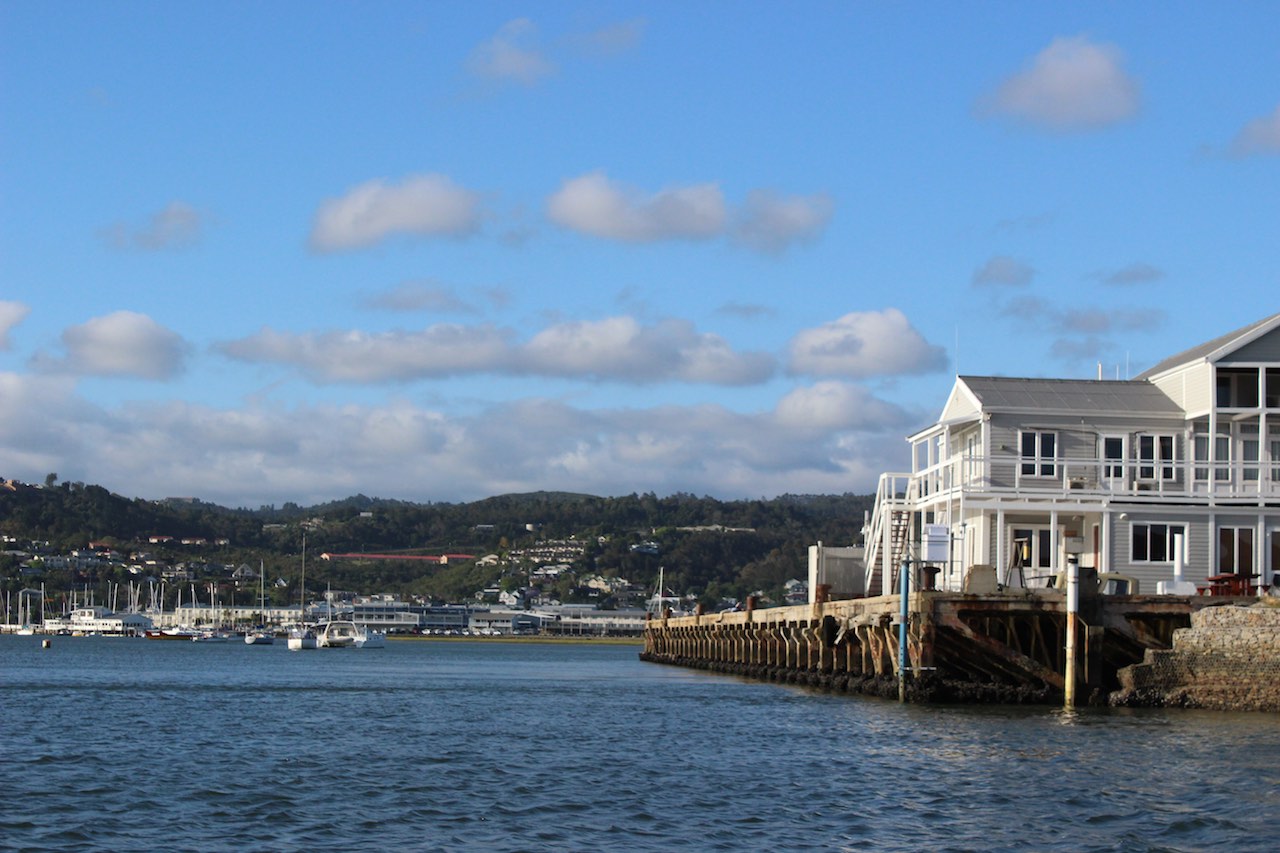 As we ambled through the Knysna forest, gradually falling behind the faster hikers in the group, conversation turned to the topic of the near-mythical elephants said to still roam here. Once thought to number around 1000, the herd had been reduced to an estimated five females by 2007. None have been seen for years and many believed the elephants to be extinct.

Then in 2014, cameras designed to capture leopard sightings caught images of a female elephant lumbering through the trees. Two years later, while searching for dung and footprints, a park ranger captured a few seconds of wobbly phone coverage as an elephant stepped onto the path in front of him.

Aside of the mythical elephants, Knysna is known for its outdoor pursuits. Sandwiched between dense forest and a cerulean blue lagoon, this is the quintessential Garden Route town. There are opportunities to scale cliffs, tackle challenging mountain biking trails, whoosh down dunes on a sandboard and paddle the lagoon in a kayak. But we had gentler pursuits in mind, starting with the 6km forest hike.

We continued to plod the undulating path, past the towering yellowwood trees that helped establish Knysna as a timber town in the 19th century; past the ferns thought to give the town its name (in the language of the indigenous Khoi people). Above our heads, the grunting call of the Knysna Loerie could be heard, but we never spotted the beautiful, emerald green bird. 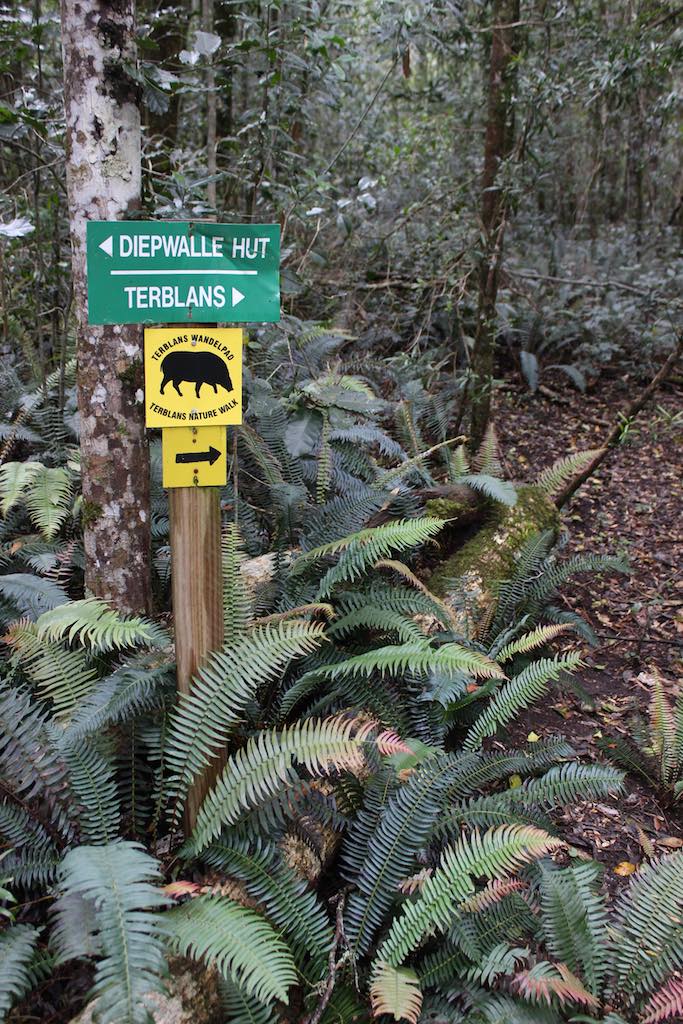 Knysna is a holiday town par excellence. Restaurants line the main road, visitors both local and international flock to the waterfront for lunch, coffee or to take a boat trip, and guesthouses, cottages and hotels look out onto the placid lagoon. Our destination was Thesen’s Island, surrounded by the lagoon but connected to the town by a low bridge.

We refuelled with a seafood lunch and a glass of locally-produced wine in the The Turbine Boutique Hotel’s Island Café, its outdoor terrace overlooking a canal. The hotel, itself a historic landmark, began its life as a power station, using waste from the timber industry to power the turbines. The current building dates back to 1939 and fascinating remnants – chains, pulleys, discs and dials – of the power station remain, dotted around the rooms and public areas as part of the hotel’s unique design. 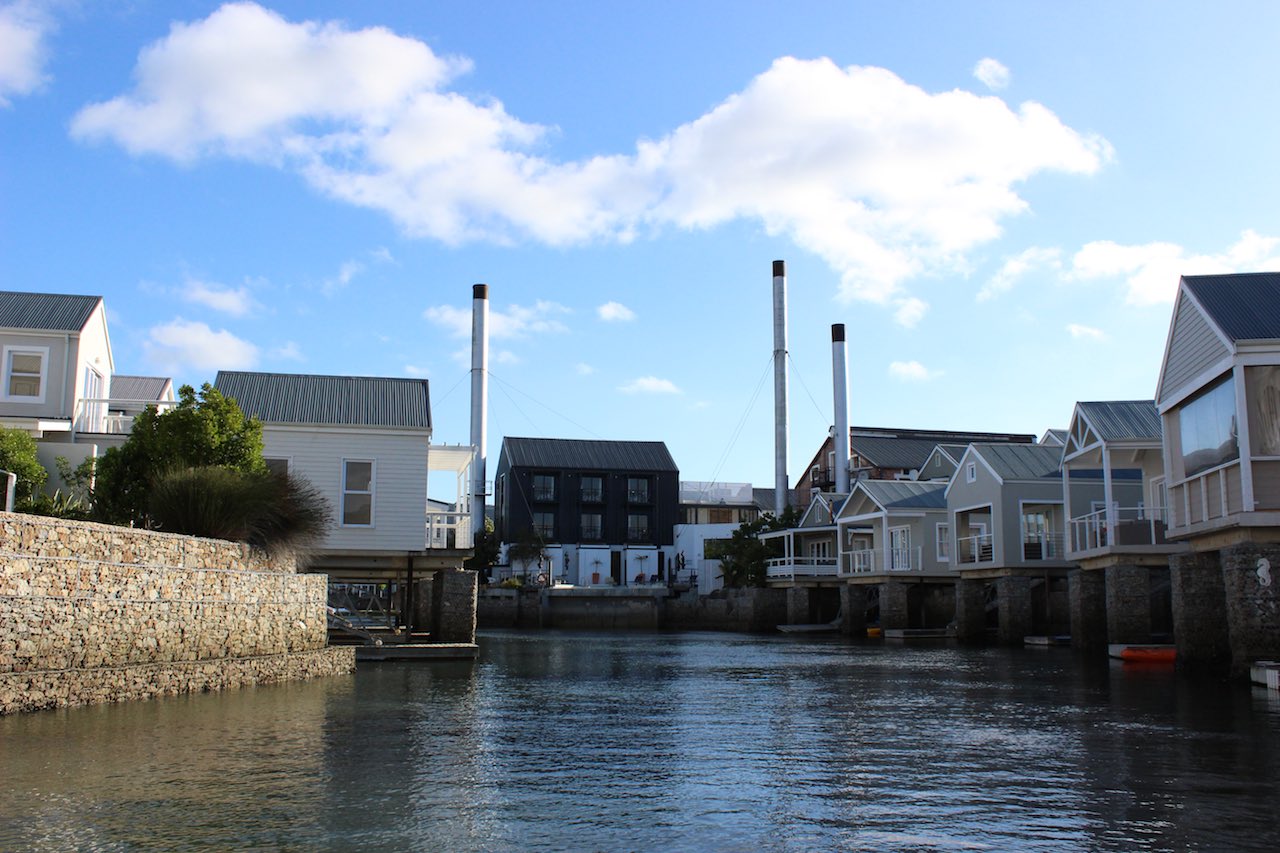 Thesen’s Island is a collection of islands – 19 in total – separated by man-made channels and connected by arched footbridges. The majority of the islands are residential and off-limits, but the main island is easily accessible from the town. Home to a cluster of waterside restaurants, an exceptional patisserie, an implausible number of real estate agents and of course, the Turbine Hotel, it’s a charming place to wander and grab a bite. For something a little more strenuous, you can rent kayaks or bikes to explore the island and lagoon beyond. 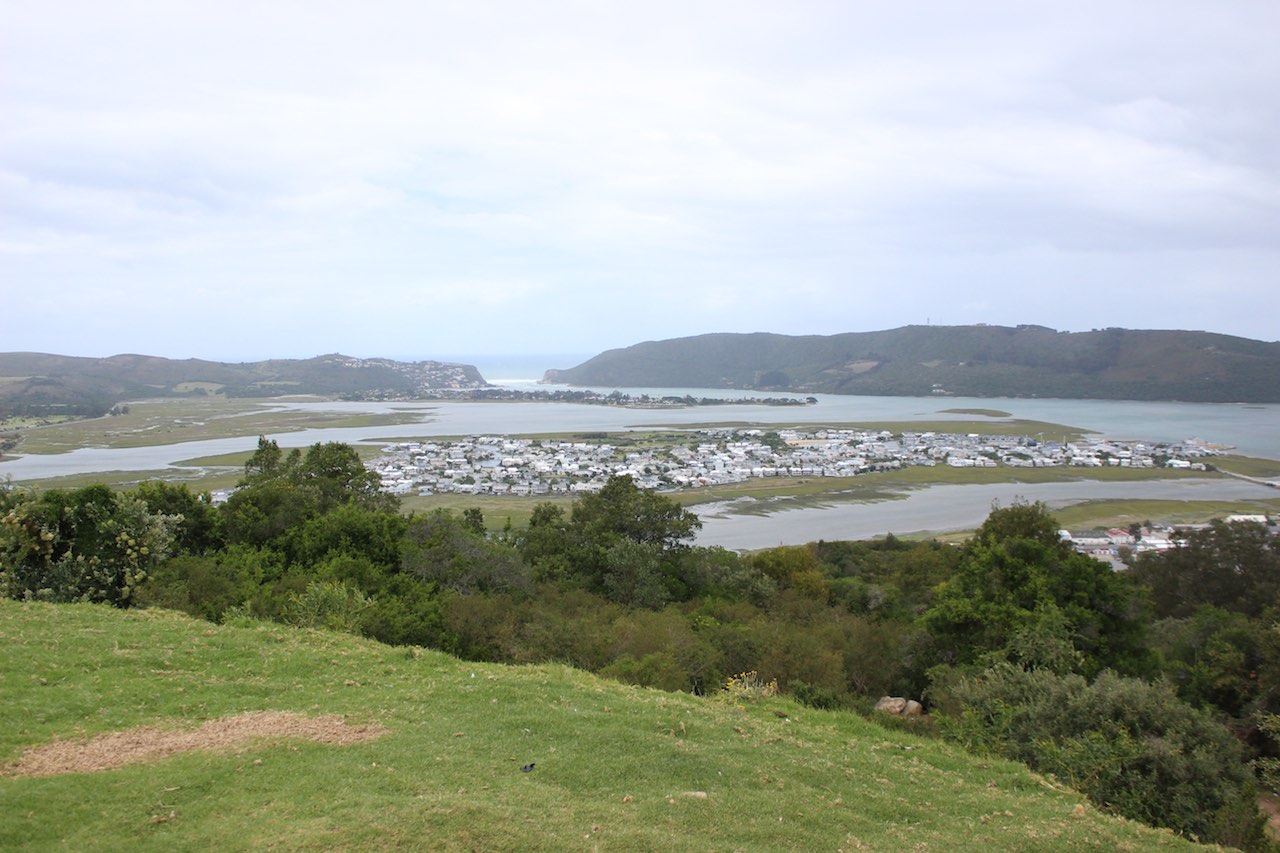 Swapping boots for a bike in search of the Heads

The following morning, we swapped hiking boots for cycling shorts and set out for a day in the saddle. Our bike tour took us away from Thesen’s Island, heading east along the lagoon’s edge then making a sharp turn towards the famed Knysna Heads. 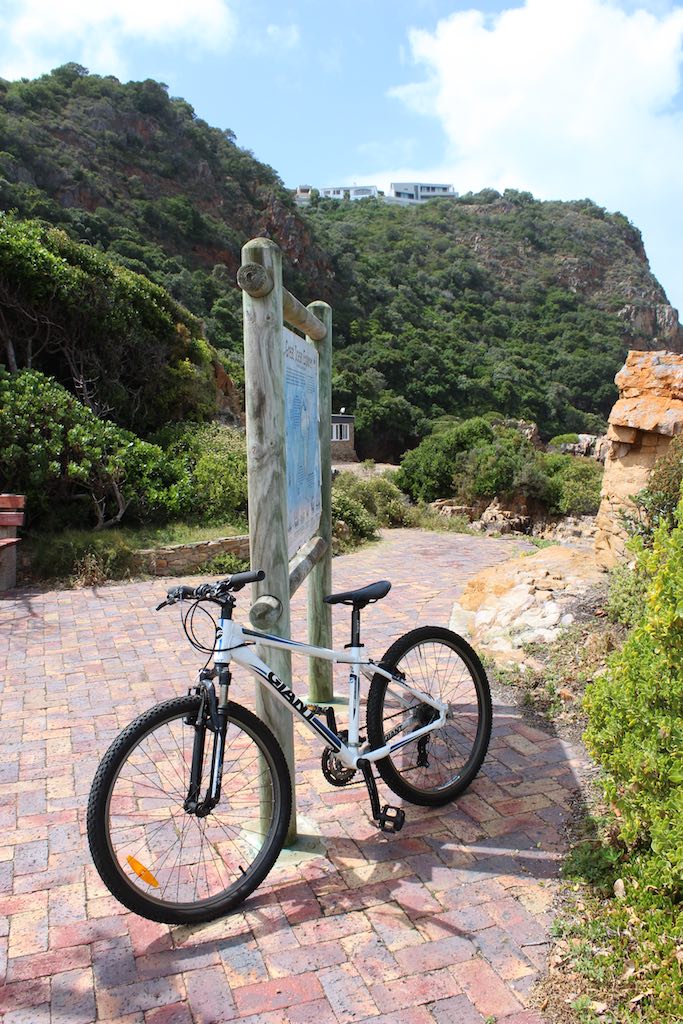 The headlands form an entrance to the Knysna Lagoon from the Indian Ocean, and strong currents have led many to refer to this as one of the most dangerous ports in the world. For most though, the Heads are viewed from the safety of a bench, restaurant or lookout point at the lagoon’s edge. The East Head Café is a particularly popular spot, serving crunchy salads and hearty burgers, but we headed instead for a quiet café on Leisure Isle, a 1.6km-long island filled with holiday homes. Freshly pressed juice was the order of the day, but after another hour of peddling, we decided a stiffer drink would be required.

Mitchell’s Brewery is the oldest microbrewery in South Africa. A recent craft beer boom has seen close to 200 small breweries popping up all over the country, but Mitchell’s predates most by three decades, its first Forester’s Lager being poured in Knysna in 1983. After a 16-or-so kilometre bike ride, a pint of Bosun’s Bitter with a view of the islands and lagoon beyond made for a fine reward.

A boat trip at sunset

That evening we would get closer to the lagoon on a sunset boat trip. The 10-seater boat was small enough to allow a peek into the channels lined with envy-inducing homes. The construction of the channels also had an unexpected benefit, creating a habitat for the endangered Knysna seahorse. Much like the elusive elephant and the emblematic Loerie, we failed to actually spot a seahorse but we certainly got our fill of Knysna’s best-loved icon: the two headlands that provide a gateway to one of South Africa’s most beloved coastal towns. 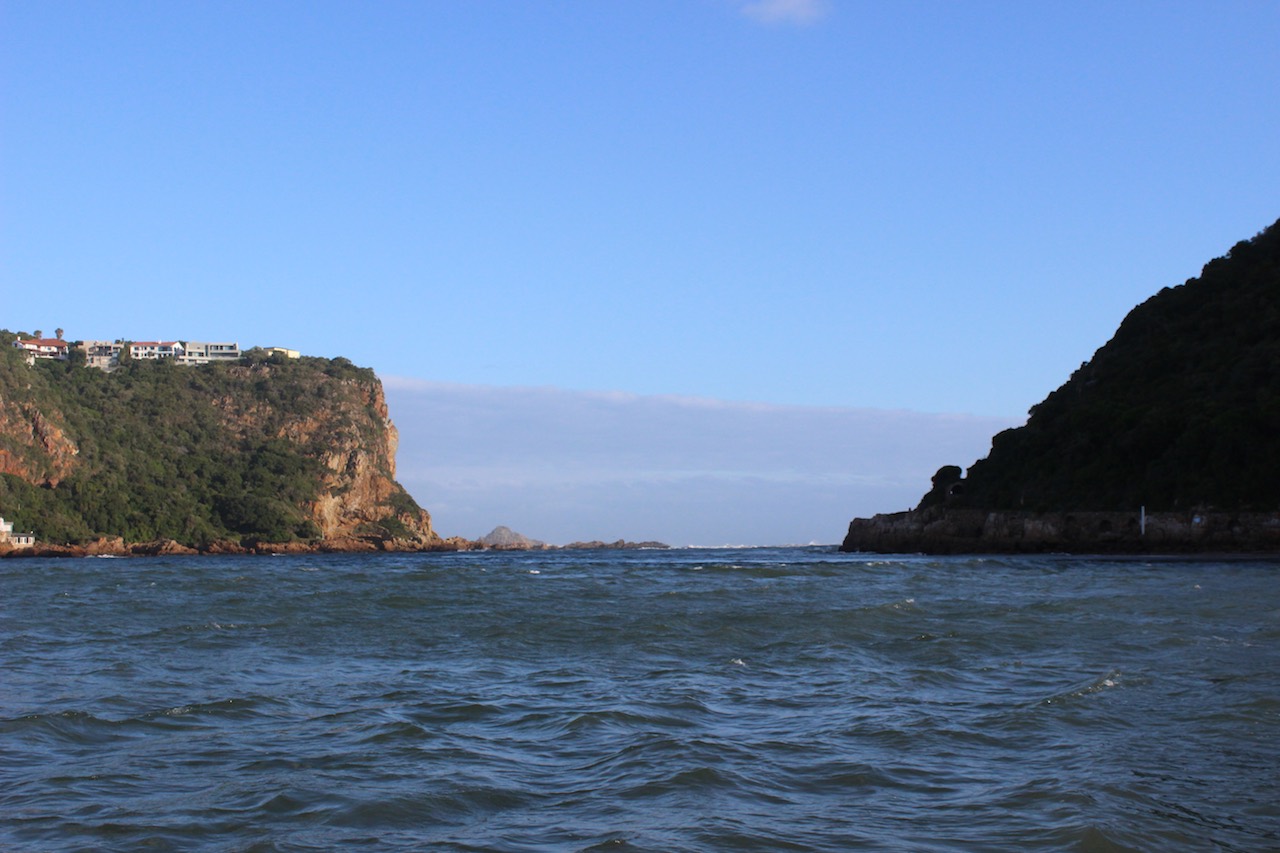 Where: Knysna is a five hour drive from Cape Town, or a short transfer from George airport.

Airlink – the Regional Feeder Airline, offers a wide network of regional and domestic flights within southern Africa and operates as a franchisee to SAA.
Route Specific Information:  Direct scheduled flights between Cape Town and Durban to George.
Connectivity: Through our alliance with SAA travellers can connect conveniently with SAA, their Partner airlines and other carriers throughout Southern Africa and the world.
Frequent Flyer Programme: Airlink is a member of South African Airways (SAA) Loyalty programme -Voyager.
Website:  www.flyairlink.com
Flight Bookings:  Online, booking agent or SAA Central Reservations  +27 11 978 1111.

Where to eat: East Head Café and Ile de Pain

Tel Aviv, the dog-friendliest city in the world, launches Digi-Dog