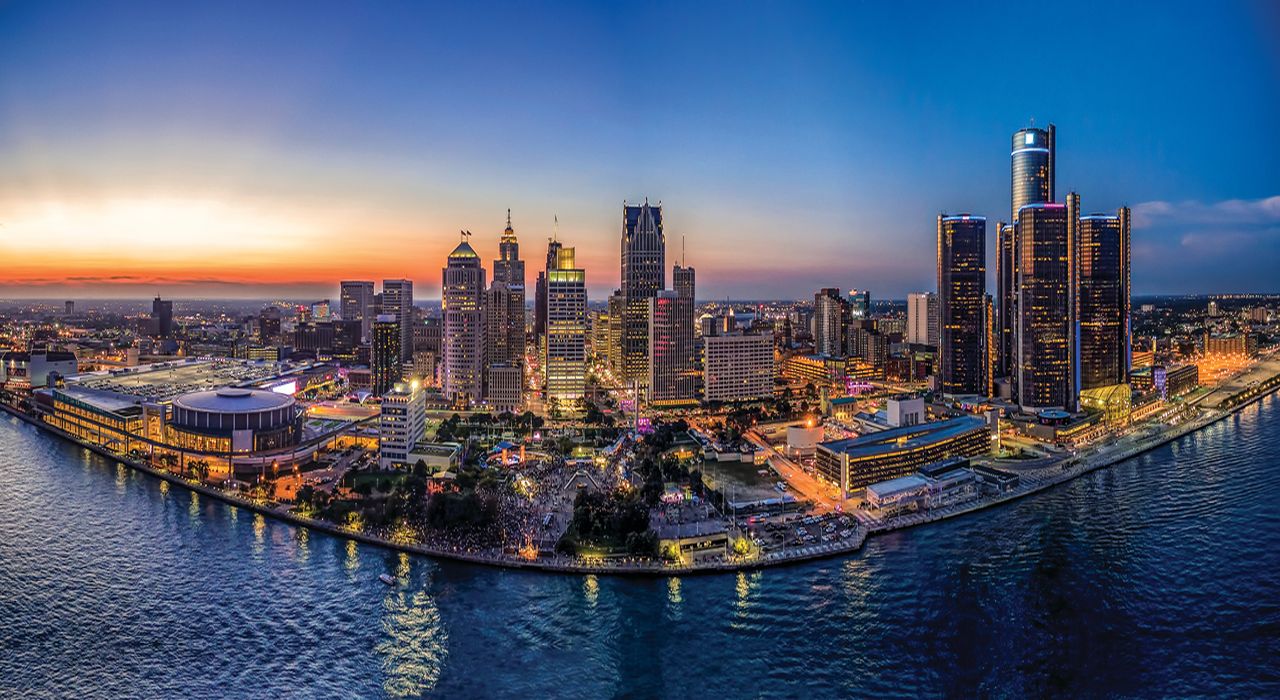 “Why would anyone want to spend time in Detroit?” asked the passport inspector at Detroit Metropolitan Wayne County Airport. Shocked, I heard myself saying, “well it’s the birthplace of Motown, home town of Aretha Franklin, has the amazing Detroit Art museum not to mention the Ford museum”. He raised an eyebrow – either I was a big shot or I had clearly done my research.

“In that case” he said, “if you have a good time and tell all your friends. Have a nice day now”.

On reflection I’m not really that surprised at the banter. Detroit is still under the cosh of its reputation as being run-down and a little unloved. Yet the city has spent the last decade going through a regeneration process where forlorn skyscrapers and iconic buildings have been and are still being restored.

The buzziest part is downtown Detroit, where just one square mile offers 175 bars and restaurants. This is also home to a heritage steeped in ice hockey (Detroit Red Wings), baseball (Detroit Tigers) and American football (Detroit Lions) who collectively entice hundreds of thousands fans into the city’s magnificent stadiums.

In any case, Detroit, part of the State of Michigan, is known for two amazing achievements, both of which will get you moving. The first is the motor industry thanks to Henry Ford and the second is the legendary Motown music.

Some say that the city reminds them of New York because it has skyscrapers. And like the Big Apple, homes are heated by underground mechanisms and to release the pressure, steam is let out from holes in the ground. Fair enough, but that is where any similarity ends.

Must stay at the Aloft Detroit at the David Whitney building

The Aloft hotel is housed in the iconic David Whitney Building. It was built in 1915 in a Neo-Renaissance style exterior with a beautiful terracotta and glazed brick facade. It recently  underwent a huge refurb costing $92 million resulting in 136 contemporary styled rooms scattered over 19 stories. The X-factor is the  incredible four storey atrium and skylight that splashes daylight over a spacious lobby that is unabashedly covered in marble and gold leafing.

Read our Review of the Aloft Detroit

Must tour the Ford Rouge Factory

Detroit aka Motor City has a long history connected to the Ford family. The city is known for the manufacture of Chrysler, General Motors and Ford in the Henry Ford factory. It impacted the city positively by employing 10,000 of its two million city folk. But then came automation and robots and the workforce reduced. Today there are around 3,000 people who oversee the smooth running of the production line.

Though it may seem odd to suggest a visit, watching how a car moves through the assembly line with the precision of human intervention is actually mesmerising. A new car leaves the assembly line every 53 seconds, averaging 1,500 trucks a day every single day. The 007 style multisensory film in 5D is pretty amazing and later you get to see the Legacy Gallery display of the groundbreaking V-8, the classic Thunderbird and the Mustang.

Must check out Henry Ford Museum of American Innovation

This is a rather large snapshot of American life depicted through Henry Ford‘s massive collection of Americana which he started in 1929. You’ll get to see his first ever car, the “Quadricycle,” which ran on four bicycle tyres, presidential cars, airplanes, a museum of mathematica, furniture and even tractors. 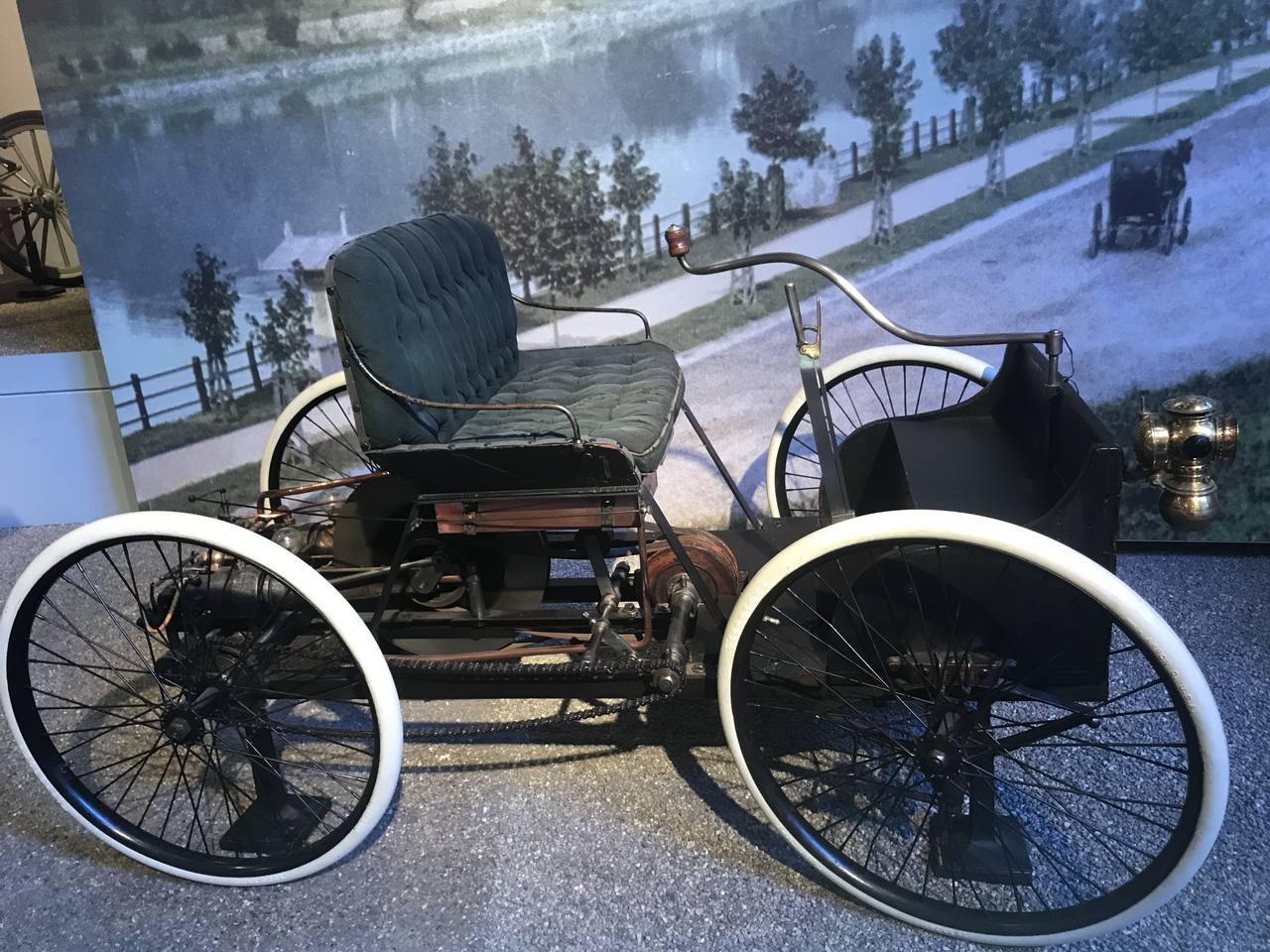 You can also see the bus in which Rosa Parks, dubbed the Mother of Human Rights, famously made a stand against segregation causing a city-wide boycott of the bus company of Montgomery in 1955. The story goes that Rosa indignantly refused to give up her seat in favour of a white person. It was her arrest that led to the wave of protest and the following civil rights movement.

Other interesting artefacts are the rocking chair in which Abraham Lincoln was shot and died, tens of cars and tractors and even planes.

There’s also a real Model T, the first affordable Ford car, which is taken apart every day and visitors can put it back together again. It’s really quite simple.

Must see some art at the Detroit Institute of Arts (DIA)

Detroit Institute of Arts is the second largest art museum in the USA and has a unique and rare collection of artwork. Check out Peter Brugel’s The Wedding Dance (1566) which was, in its time, controversial because it depicted mixed dancing and kissing. 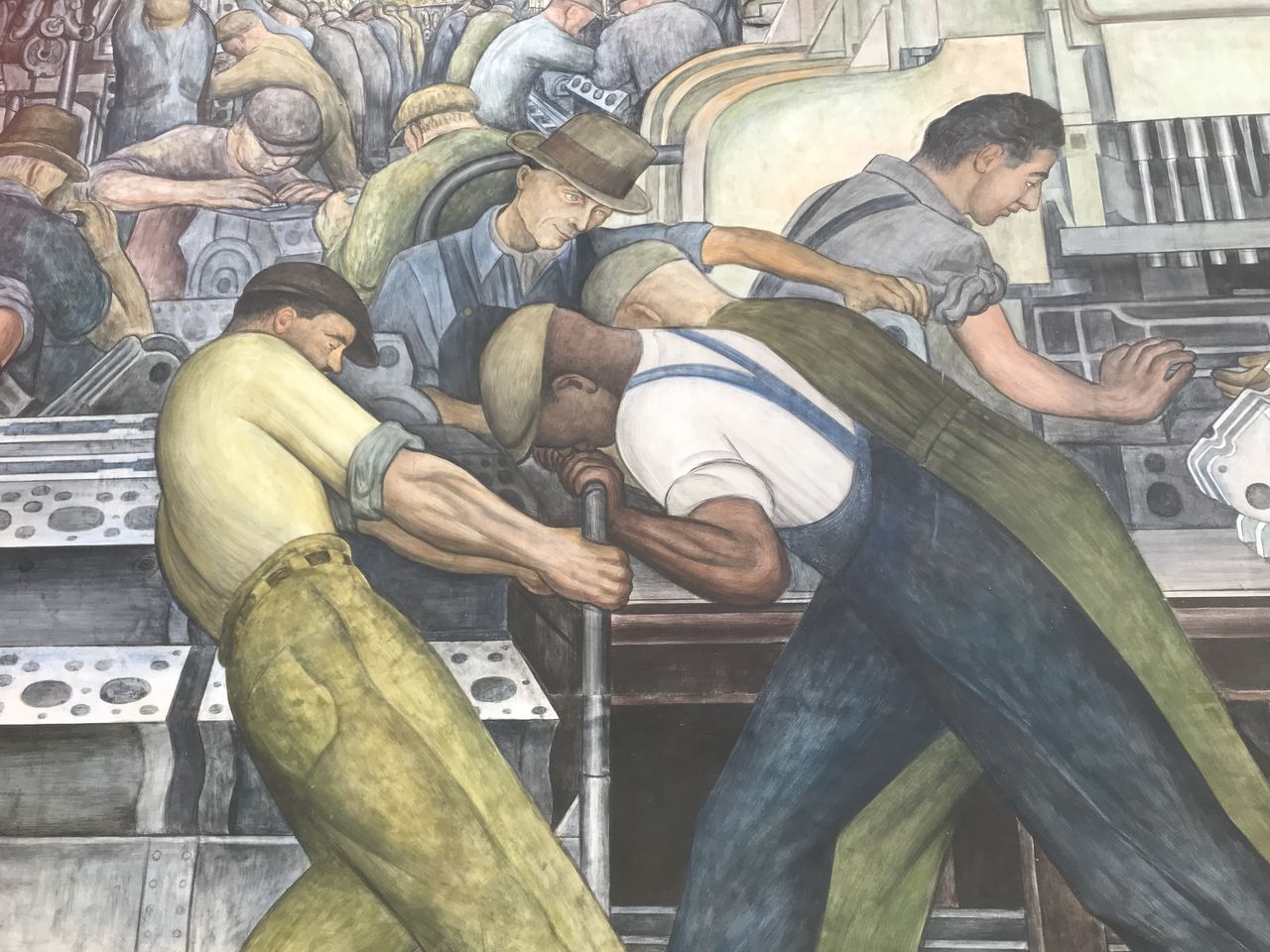 A part of the Rouge Factory assemply plant. Some faces are distinct and were people the artist knew. c. Sharron Livingston

There are also the Diego Rivera’s murals. Rivera, who was married to fellow Mexican artist Frida Kahlo, was a Mexican communist who was brought in by Cecil Ford during the Great Depression to create these artworks as a tribute to the industry and its workers. There are 27 panels collectively known as the “Detroit Industry Murals,” depicting the evolution of the Ford Motor Company highlighting the human plight.

There are plenty of other artists too including Cezanne, Dega, Matisse and Picasso and Van Gogh. Check out Van Gogh’s Bank of the Olise at Anvers (1890) where thick brush strokes took a staggering three years to dry.

Must boogie down to the Motown Museum 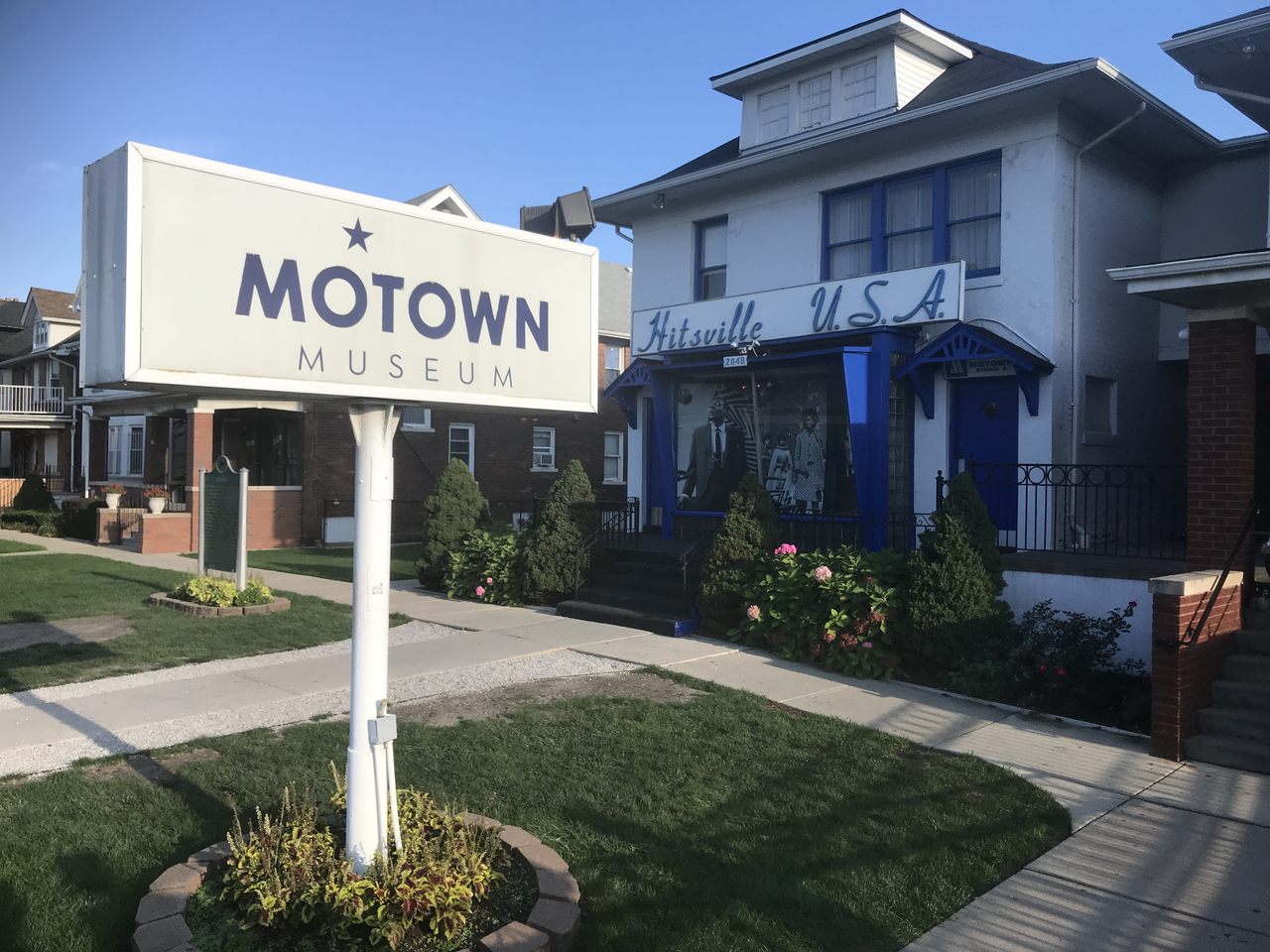 The wonderful Motown music was conceived in Hitsville USA, the nickname for the house that was home of founder Berry Gordy and the studio where the music was recorded. It’s a glamourous name for a house that looks like grandma lives there.

Motown Museum was named in empathy with the nickname of Detroit, “Motor City”, and the company that inspired the Motown rhythm. Prior to Motown Gordy had a job at the Ford Factory which he said was “the worst job in the world”. Nevertheless, he became inspired by the repetitive sounds heard in the factory and that beat became the backbone to the distinctive Motown sound.

With a family loan of $800 from his family he began to write and produce music. Again inspired by the Ford Factory he copied the flow of the production line and created a metaphorical factory floor:  find raw teenage talent, teach them to dance, social etiquette and grooming then release them into the world and turn them into stars. The rest is history – think local Motown heroes Aretha Franklin, Marvin Gaye, Diana Ross, Smokey Robinson  and Michael Jackson.

It’s a bit of a cheesy tour but great fun and you get to hear lots of amazing Motown music as you pass through culminating in a stint in Studio A dancing to “My Girl”.

NEWSFLASH: 2019 marks the 60th anniversary of Motown records. There will be dancing in the streets. Celebrations will consist of a series of high-profile events led by Hitsville U.S.A., including a new exhibit, a spring block party on May 19th in the grounds of the museum with live music, food trucks and free museum tours. The museum has also launched “Archive Dives,” a Facebook video series that will periodically reveal little-seen artefacts from the collection.

Must admire the Fisher Building 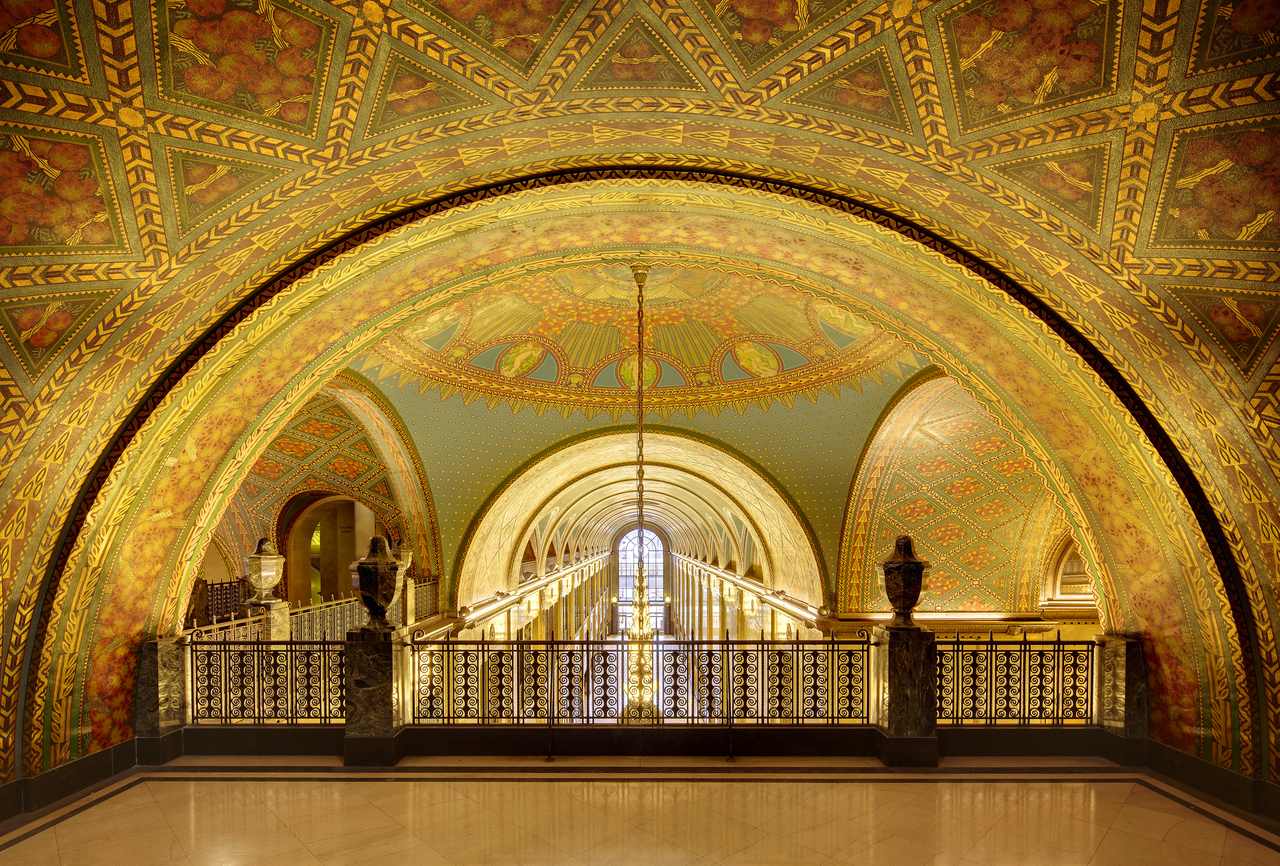 For an incredible eyeful of splendour take a tour of the Art Deco style Fisher building. Architect Albert Kahn’s 1928 masterpiece on West Grand Boulevard in midtown is an ornate 30-story skyscraper landmark and is so beautiful it is known as Detroit’s Largest Art Object.

On a sunny day its limestone, granite, and several types of marble dazzle in the sunlight. Inside you will see the exquisite interior arcade, including one-of-a-kind mosaics, hand-painted ceilings, Art Deco chandeliers, and the finest craftsmanship in stone, brass and bronze and magnificent views over the city. You can also catch a show in its equally lovely theatre. Tours are free but it’s best if you register first.

Must take a walk in Rivertown 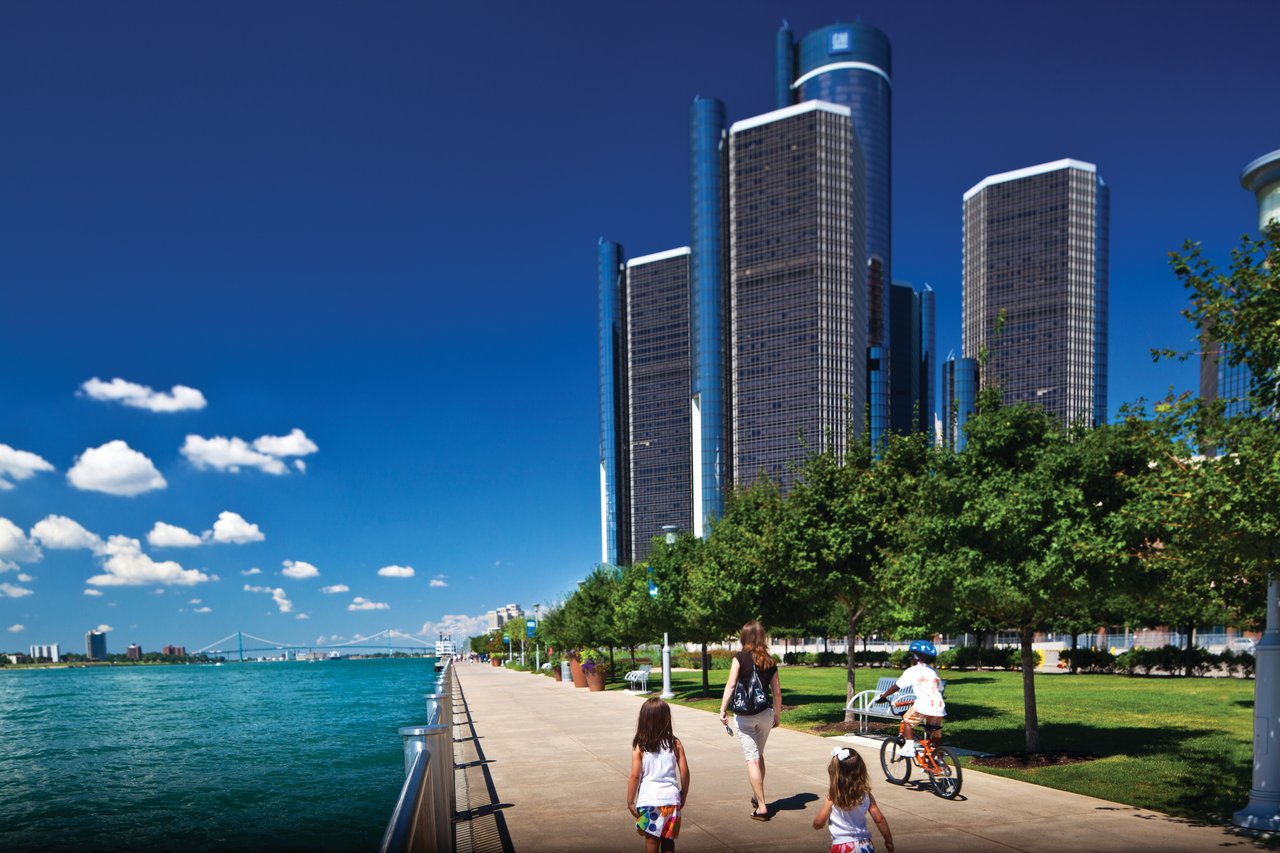 More than 3 miles of RiverWalk.

The five-mile Detroit International RiverWalk which stretches the city’s riverfront is quite something especially at night when the city lights reflect in its water. Couples often spend time there to enjoy the romance of nightfall. It connects Chene Park Ampitheatre and William G Miliken State Park and Harbor and leads visitors to the Outdoor Adventure Center.

Incidentally, the land you see over the other side of the water is Canada.

In Detroit go for American cuisine. It’s casual stuff but delicious. Two places that get it right are Wright & Company and Lumen Restaurant both in the Downtown area.

Wright & Company is a gastro-bistro serving modern American small plates – two per person and then share – craft cocktails (loved the raspberry martini) wines and craft beers from around the world. You will find it on the second floor of the historic Wright-Kay building. The door is easy to miss and the lift quite bland but opens to a hip industrial-themed scene with a great vibe. You can sit at the bar or by a table. Try the potato chips, crab cakes, scallops, chicken,  roasted cauliflower and beef tenderloin and for afters a butterscotch dessert or orange date cake.

The new Lumen Restaurant located in an appealing building with tall windows with views over Beacon Park is an American bar/restaurant. You can eat inside or out depending on the weather. The menu is quite small but with some great choices. Be sure to try the hot pretzel sticks and the Wagyu beef. Other items are Mac and cheese, crab chowder, a generous charcurterie selection, salmon and pasta with shrimp.

A nice lunchtime venue is the The Jolly Pumpkin brewery – an atmospheric brewery and pizzeria in the Midtown area. As well as pizza you can also get curried chips, hummus flat breads and of course a huge selection of beer.

Revealed: 8 of the best British historic houses, gardens and sights