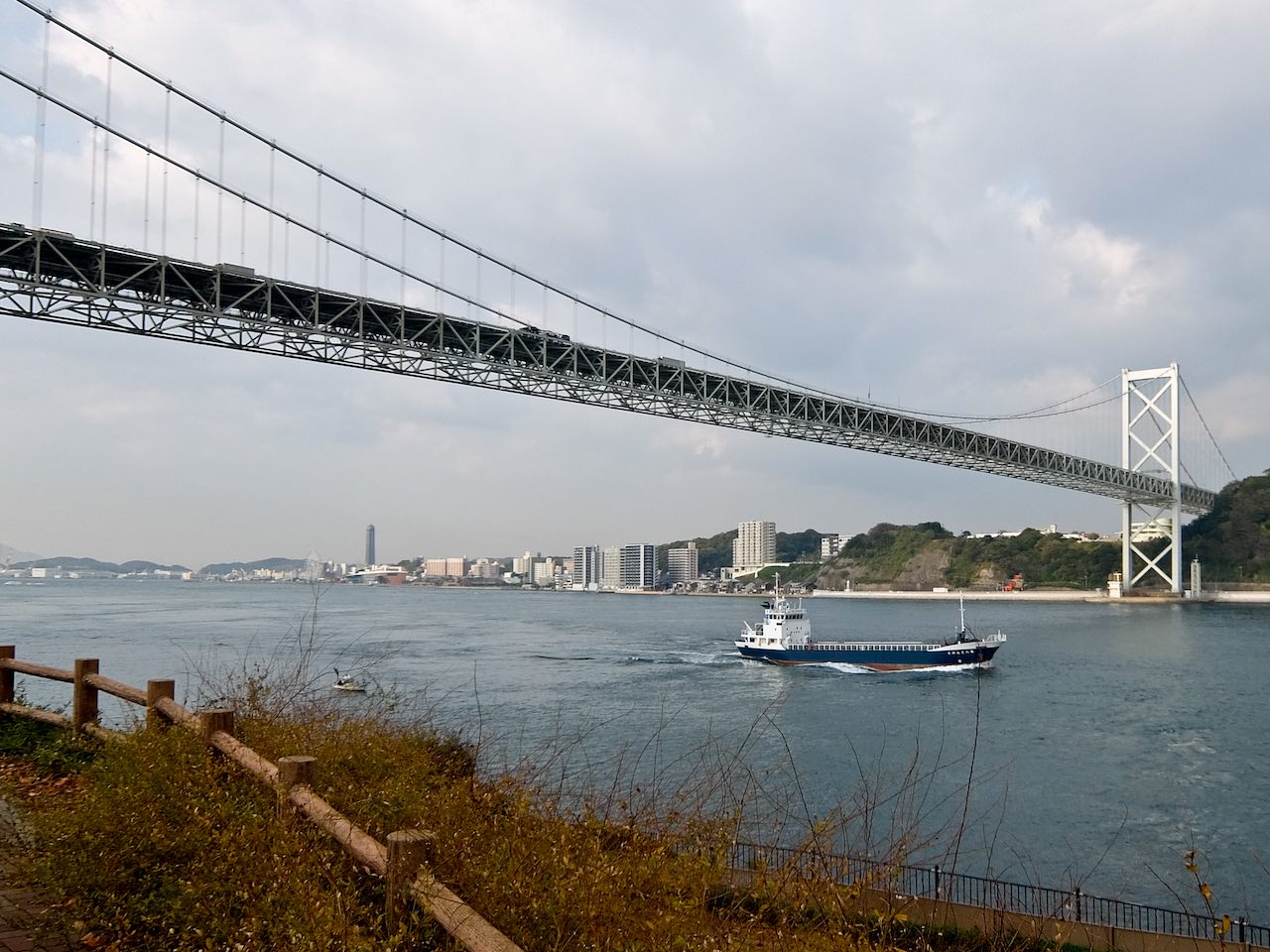 Kyushu is the third largest island in Japan and the most south westerly. Most people visit Nagasaki and get no further but it’s worth exploring the rest of the island.

There’s volcanic activity here, with eruptions as recent as 2018, and you can hike the rim of the world’s largest caldera crater. For something more relaxing immerse yourself in the largest collection of hot springs in Japan, eating food cooked in the steam, and don’t forget to pay a visit to the world’s only toilet museum.

The largest collection of hot springs in Japan is found in Beppu, around a four hour train ride east of Nagasaki. Every day 100 millions of litres of hot water gush from the ground creating dense plumes of steam that makes you think the town is on fire.  In the suburb of Kannawa you’ll find a range of onsens (hot baths), from basic public ones to luxury pools in upmarket boutique hotels. Be aware that complete nudity is obligatory although the sexes are separated. 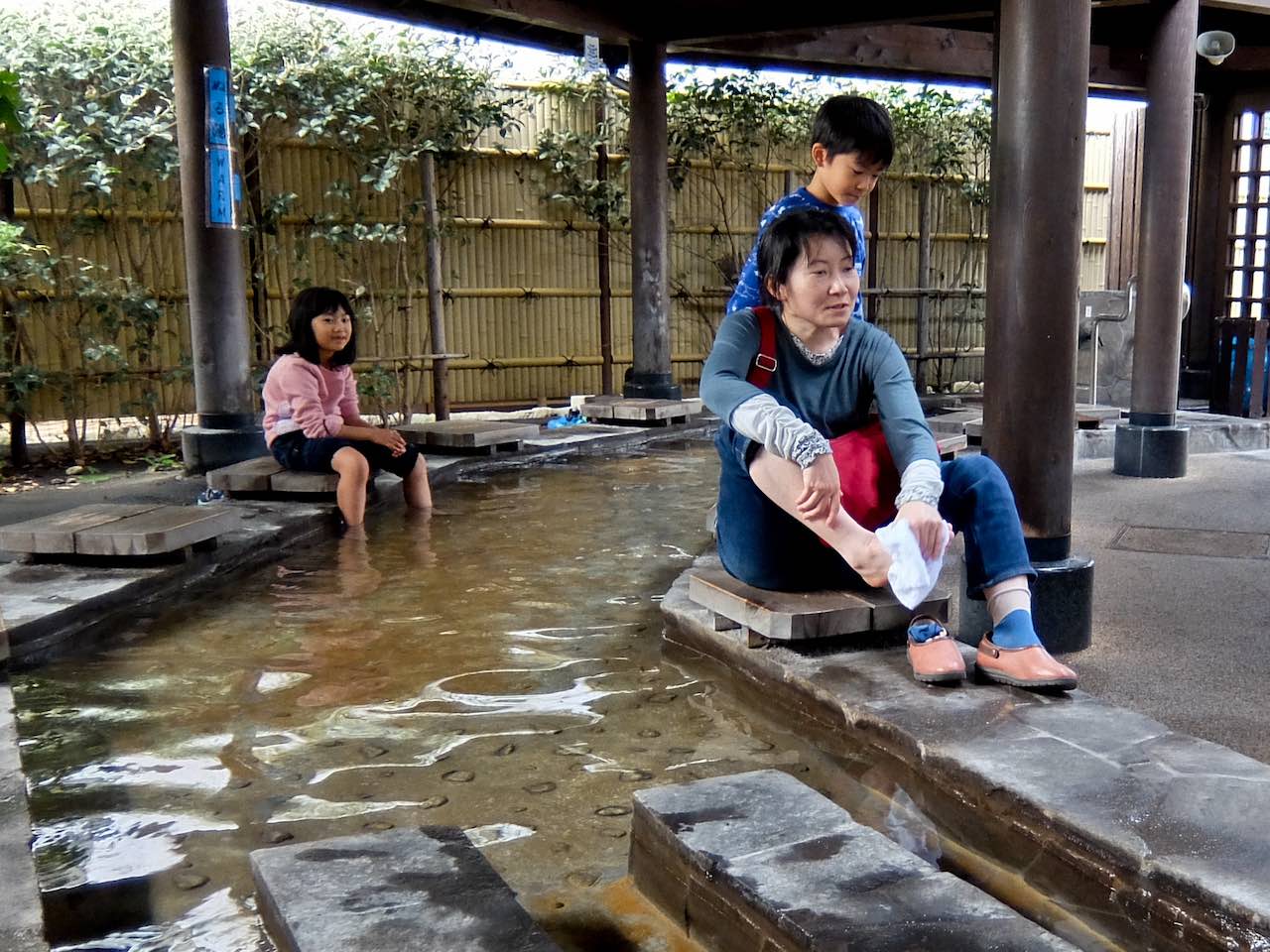 The bubbling hot springs where the water temperature is too high to bathe are known as Jigoku or Hells. You take your pick from the steaming artificially blue Umi Jigoku (Sea Hell), Kamado Jigoku (Oven Hell) with dragons and demons overlooking a lake and Tatsumaki Jigoku (Waterspout Hell), where a geyser performs regularly. All come with cartloads of Korean tourists led by guides with show stopping patter. 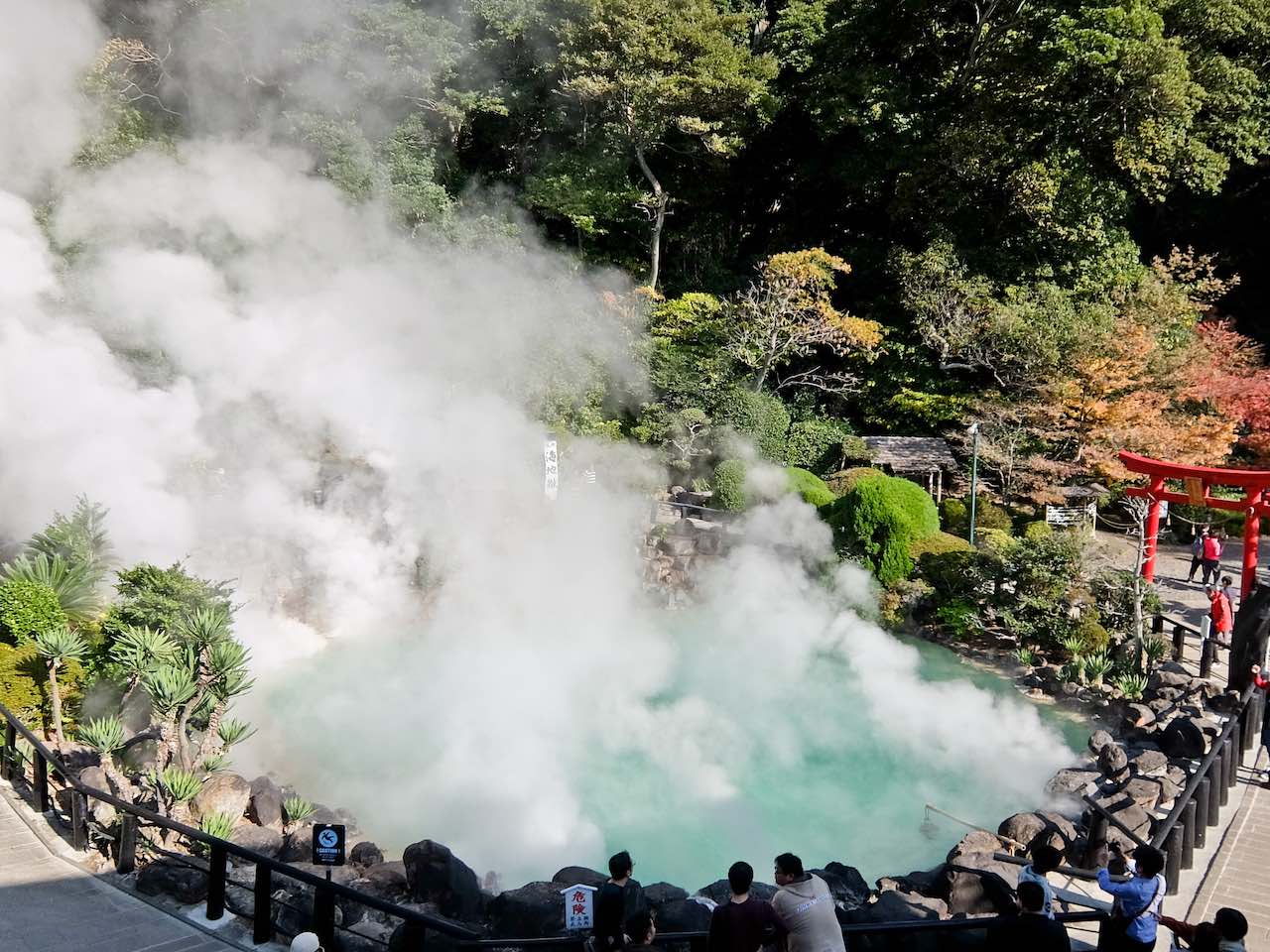 Better to go the hidden onsen in the hills above, which are not much more than holes in the ground filled with hot water, although some charge for their facilities. Tsukahara Onsen is near Mount Garan where a two hour circular hike takes you past bubbling mud pools and clouds of steam emerging from the crater floor. A local delicacy is eggs steamed for 20 hours, which emerge blackened with a distinctive smoky flavour.

In fact all over Beppu they use the natural hot steam for cooking – you’ll be served vegetables like sweetcorn, sweet potato, cabbage and pumpkin or meat including pork belly and chicken. I find the steamed breakfasts are particularly delicious. I wish I could say the same for the soggy pizza, dripping molten cheese and topped with prawns. 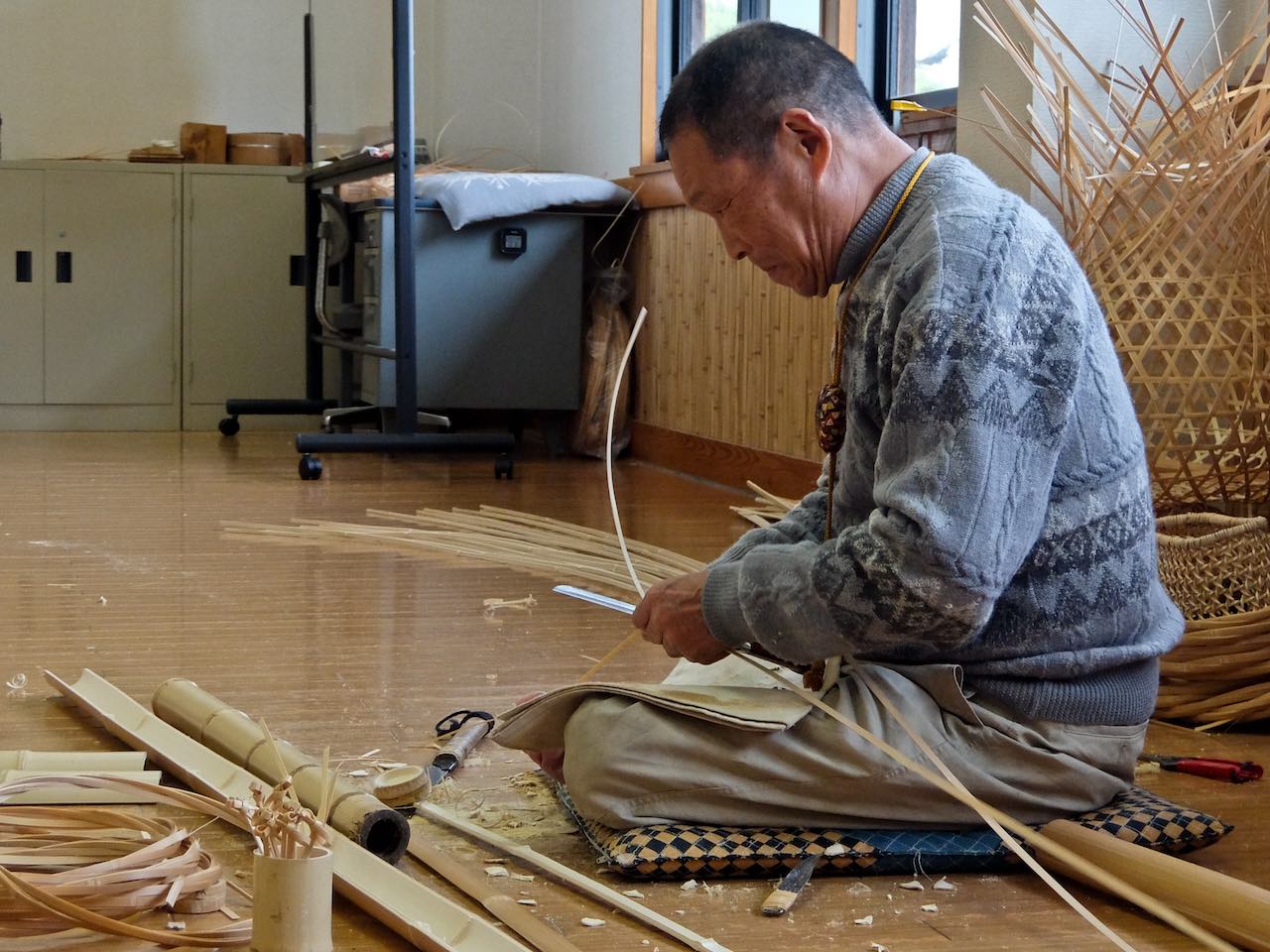 A new Bamboo Craft Museum documents the work of artisans, who started by making baskets for tourists to take home. It’s surprisingly interesting and the exhibits range from the utilitarian to the contemporary. In recent years bamboo craft has been elevated to high art with exhibitions of work in major galleries all over the world. If you’re interested, a master craftsman will teach you the basics.

Heading north, it’s two hours by train to the industrial port city of Kitakyushu, the original target for the second atomic bomb. It was cloudy on the day and the plane was diverted to Nagasaki.  It sits across the Kanmon straits from Honshu, Japan’s main island, connected by a suspension bridge and various tunnels. You can walk under the sea to Shimonoseki on the other side and if you do it both ways you’re rewarded with a Kanmon Tunnel Master certificate. 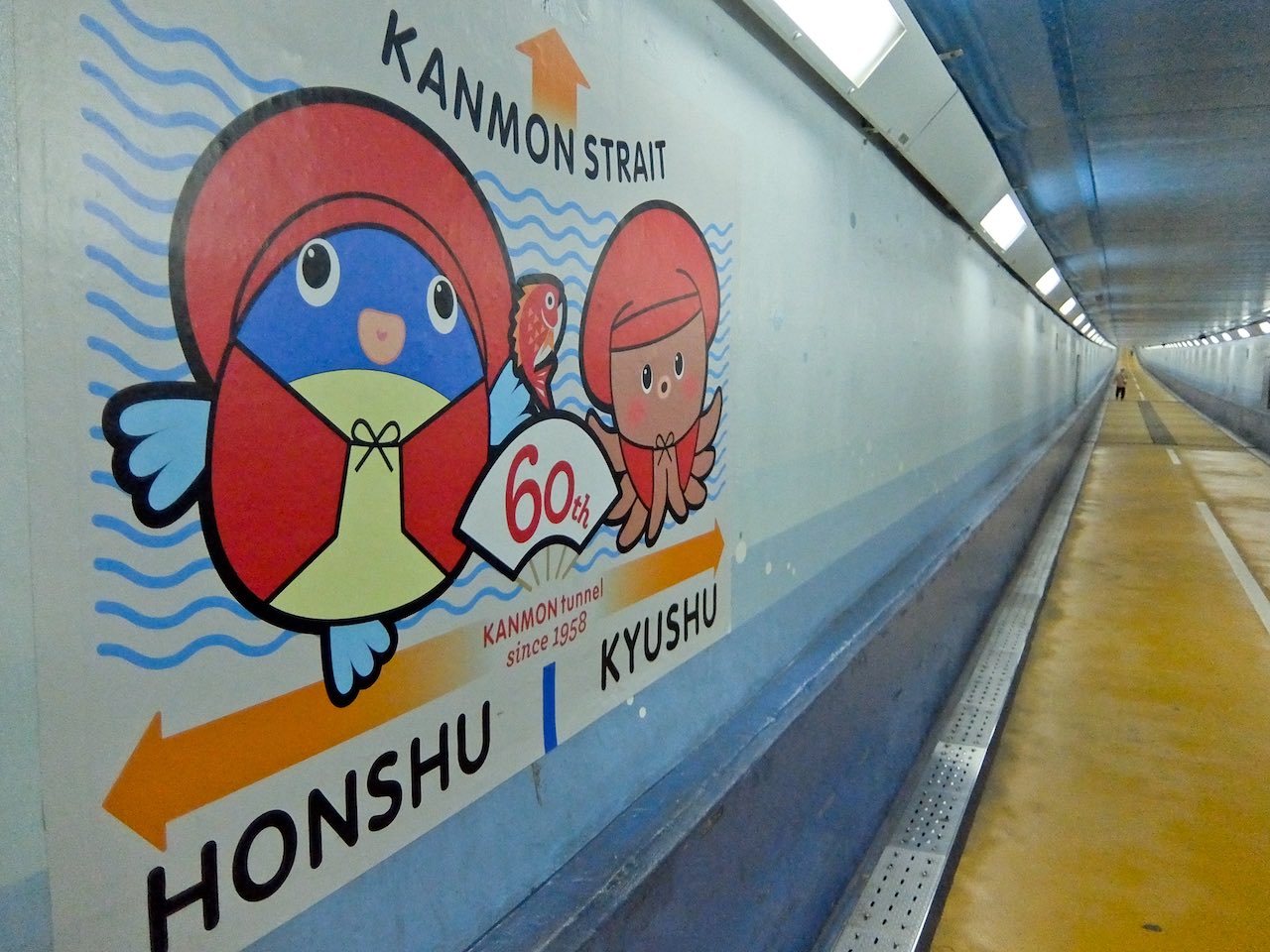 The old port of Moji, where sea passengers once arrived from other Asian destinations, has been imaginatively restored. There are several Western style buildings from the Meiji and Taisho Periods, including the former customs building which is now an art gallery. The Mojoki station office has been turned into a railway museum with vintage rolling stock and locomotives in the sidings. If you’ve ever wanted to drive a train then you can test your skills on a simulator. I came off the rails many times. 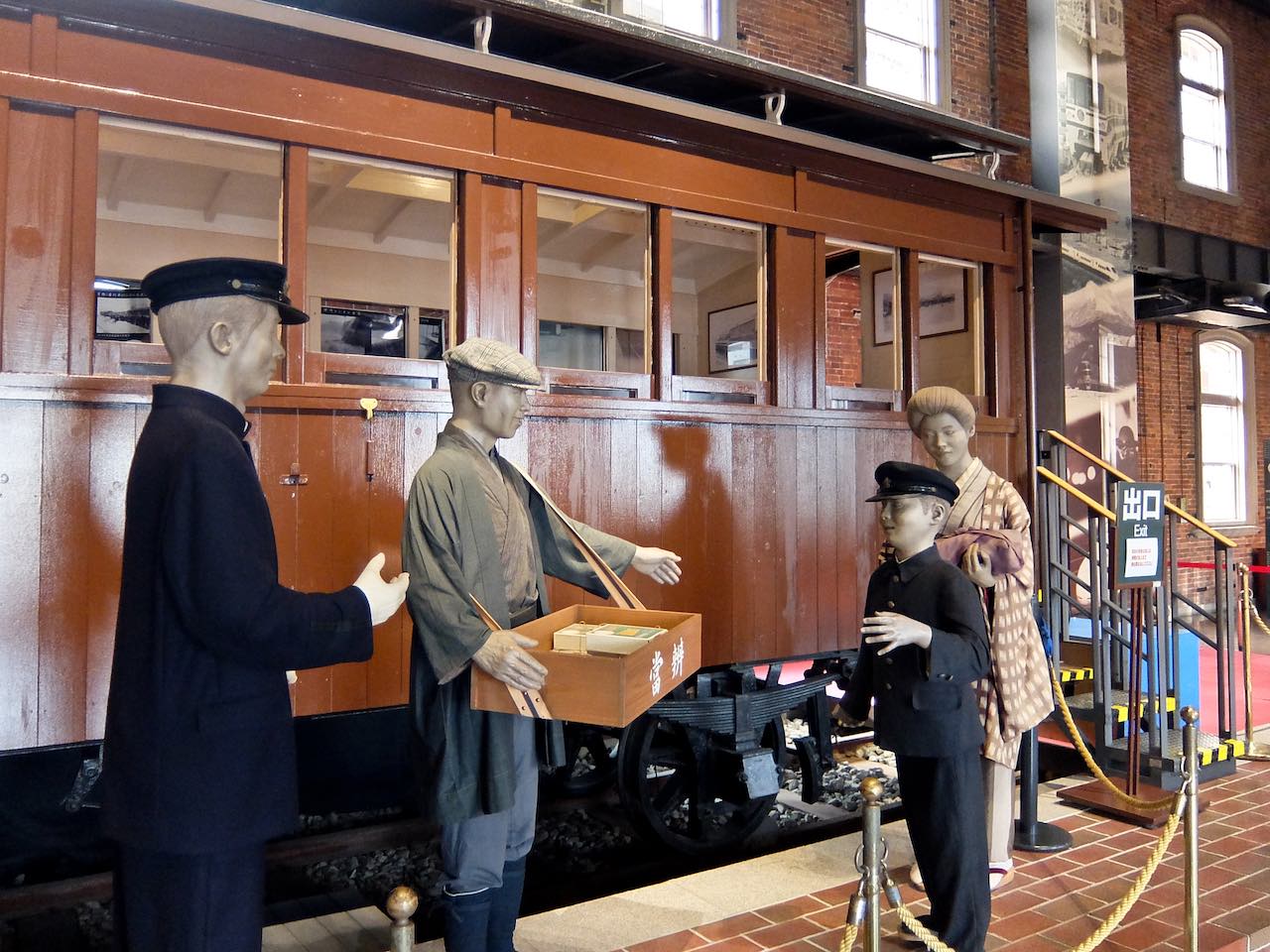 The Museum of Natural History and Human History opened in 2002 and takes you through the history of the city starting from prehistoric times up to the present. Most impressive is the large dinosaur collection which has a life size T Rex skeleton, one of only three in the world. Children will love the animatronic dinosaurs stumbling through the Mesozoic landscape with light and sound effects. 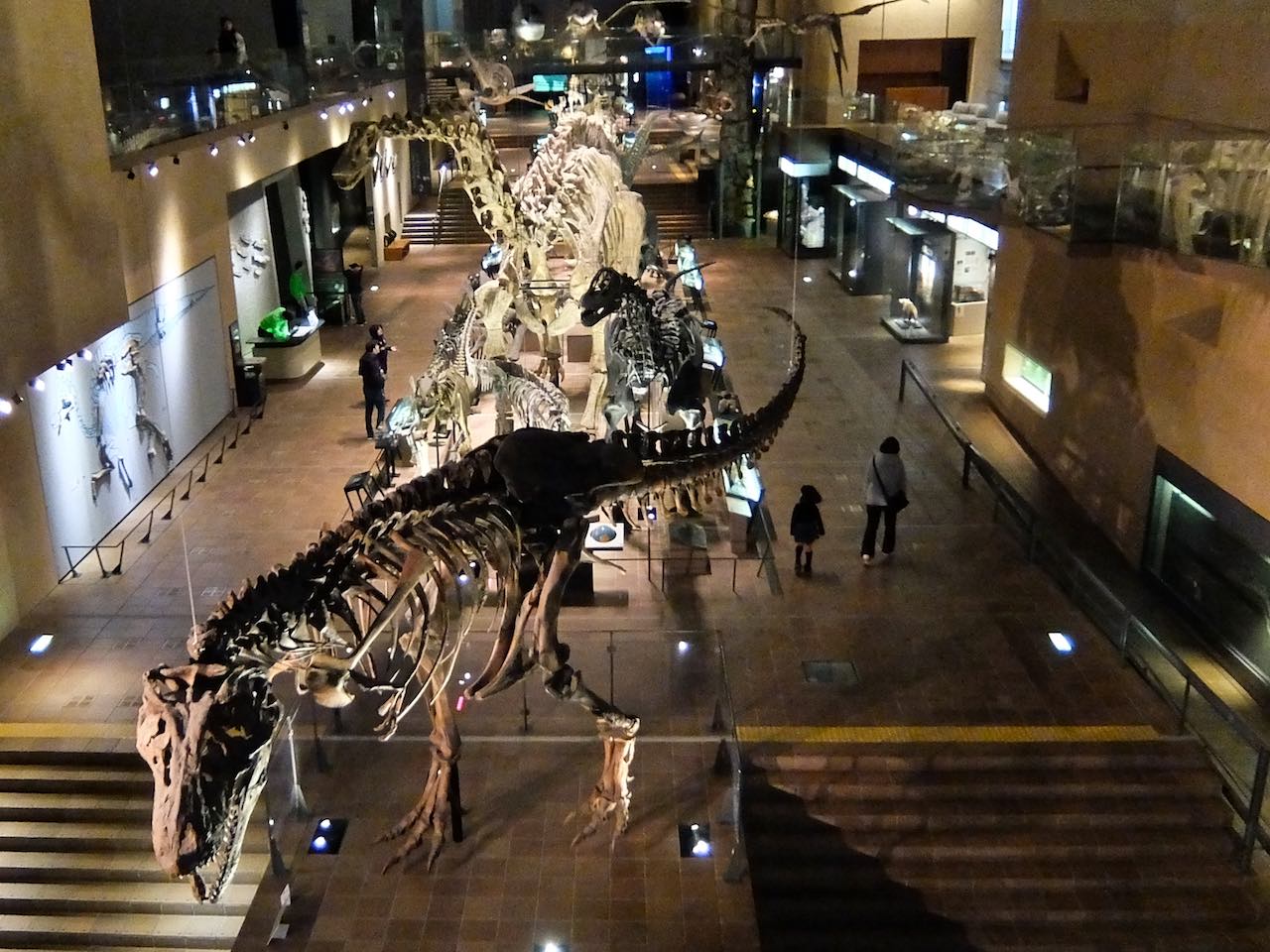 Perhaps the most idiosyncratic museum is the TOTO Museum, dedicated to toilets – it’s free so you don’t have to spend a penny. TOTO invented their Washlet in 1980, the bidet toilet seat which washes and dries your bottom, now found everywhere in Japan. Originally they were humble porcelain makers but, on a trip to Europe before WW1, they were inspired to try their hand at making toilet bowls. 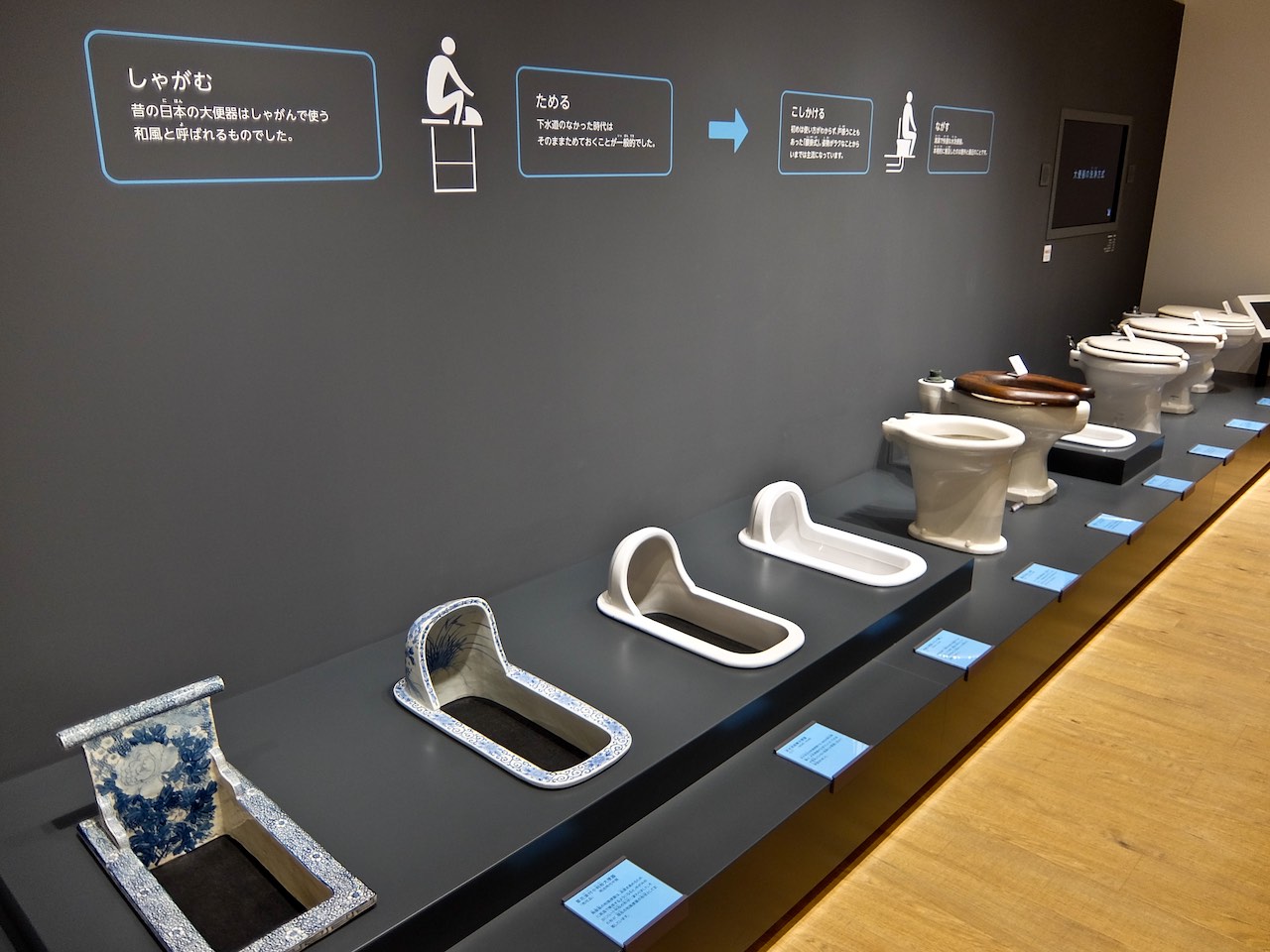 There’s a gallery showing the evolution of toilets and urinals over the years and even historical fittings from the Tokyo US High Command and the Japanese Parliament. Pride of place, though, is given to the Toilet Bike, powered from a waste tank fermenting away on the back. Disappointingly, although you actually sit on a toilet seat, it’s not fully functioning. It seems there might be a problem with naked behinds on Japanese roads.

Kumamoto, two and half hour’s south, is where Miyamoto Musashi, Japan’s most legendary Samurai warrior, spent his final years before his death in 1645. He lived close to Japan’s third largest castle, built between 1601 and 1607, and considered impregnable. Ironically, during the 1877 Satsuma rebellion, government forces managed to hold it during a long siege of disgruntled Samurai, although the castle keep was burned down. It was reconstructed in concrete in the 1960’s and the castle underwent further restoration in the late 1990’s.

Unfortunately there was a massive earthquake in 2016 which damaged roofs and towers and also brought down some of the walls.  At the moment you can only view it from the outside and reconstruction work will take at least twenty years. Still it’s an impressive sight and there’s an excellent museum where actors re-enact the story of siege. 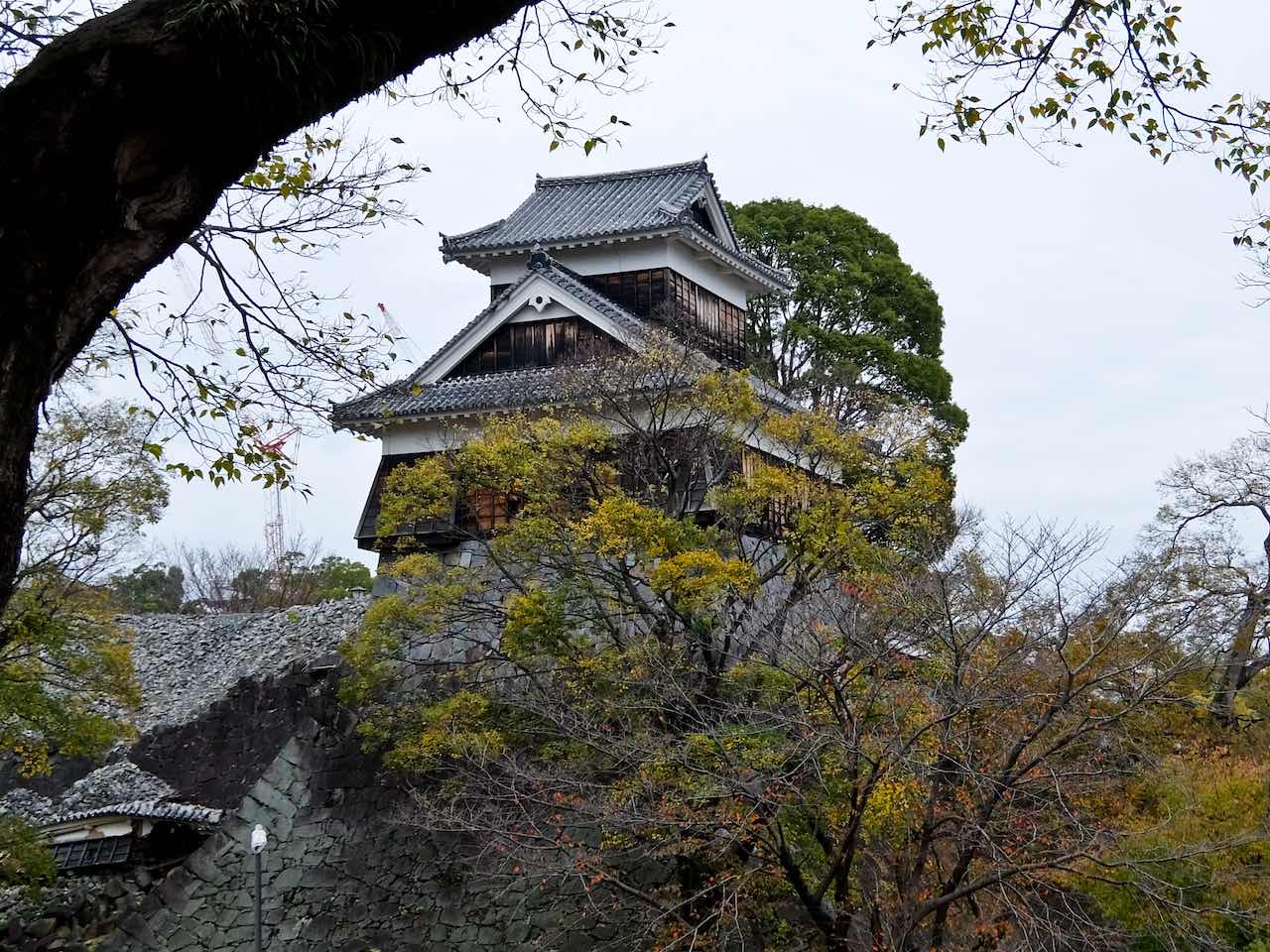 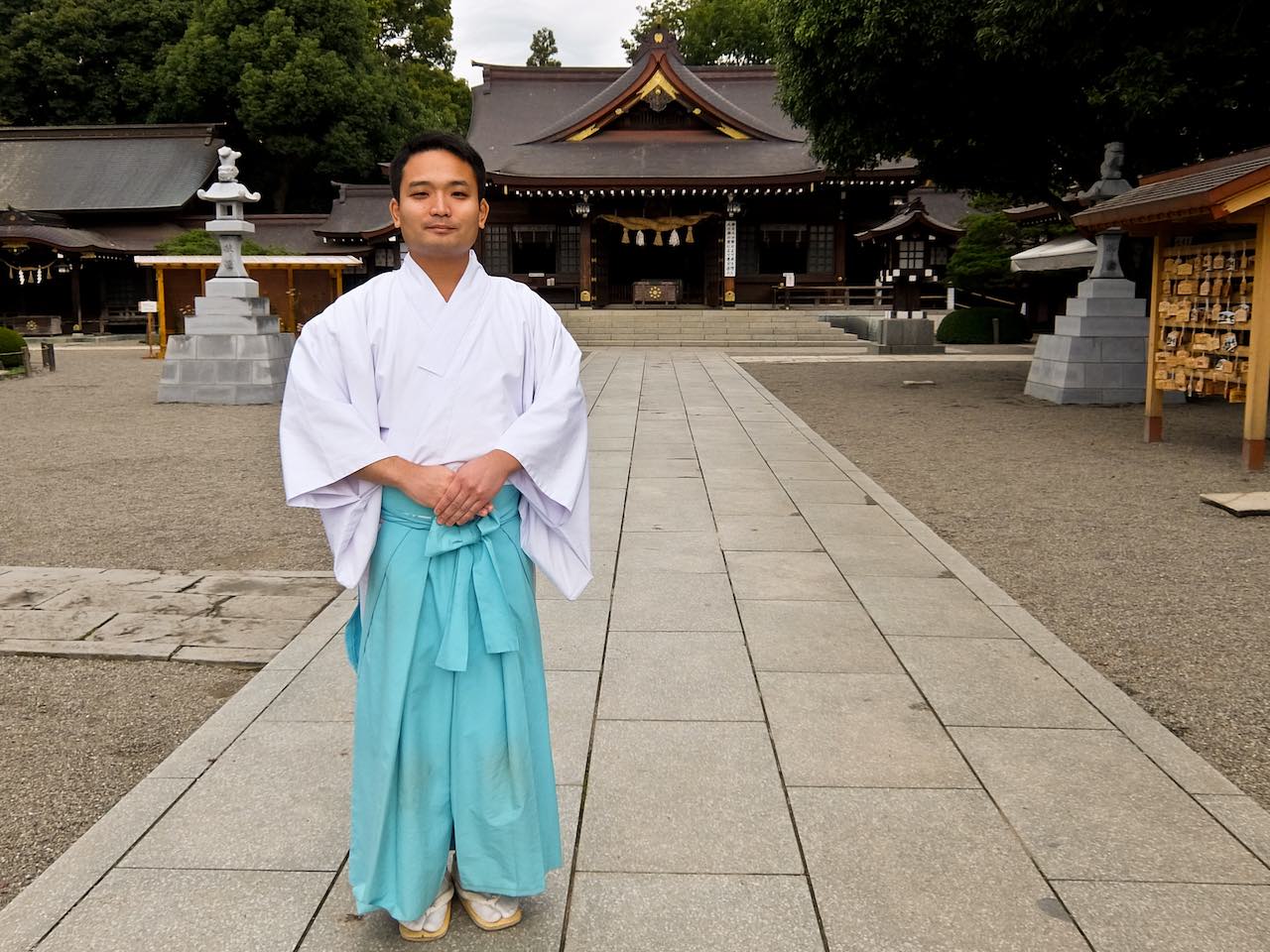 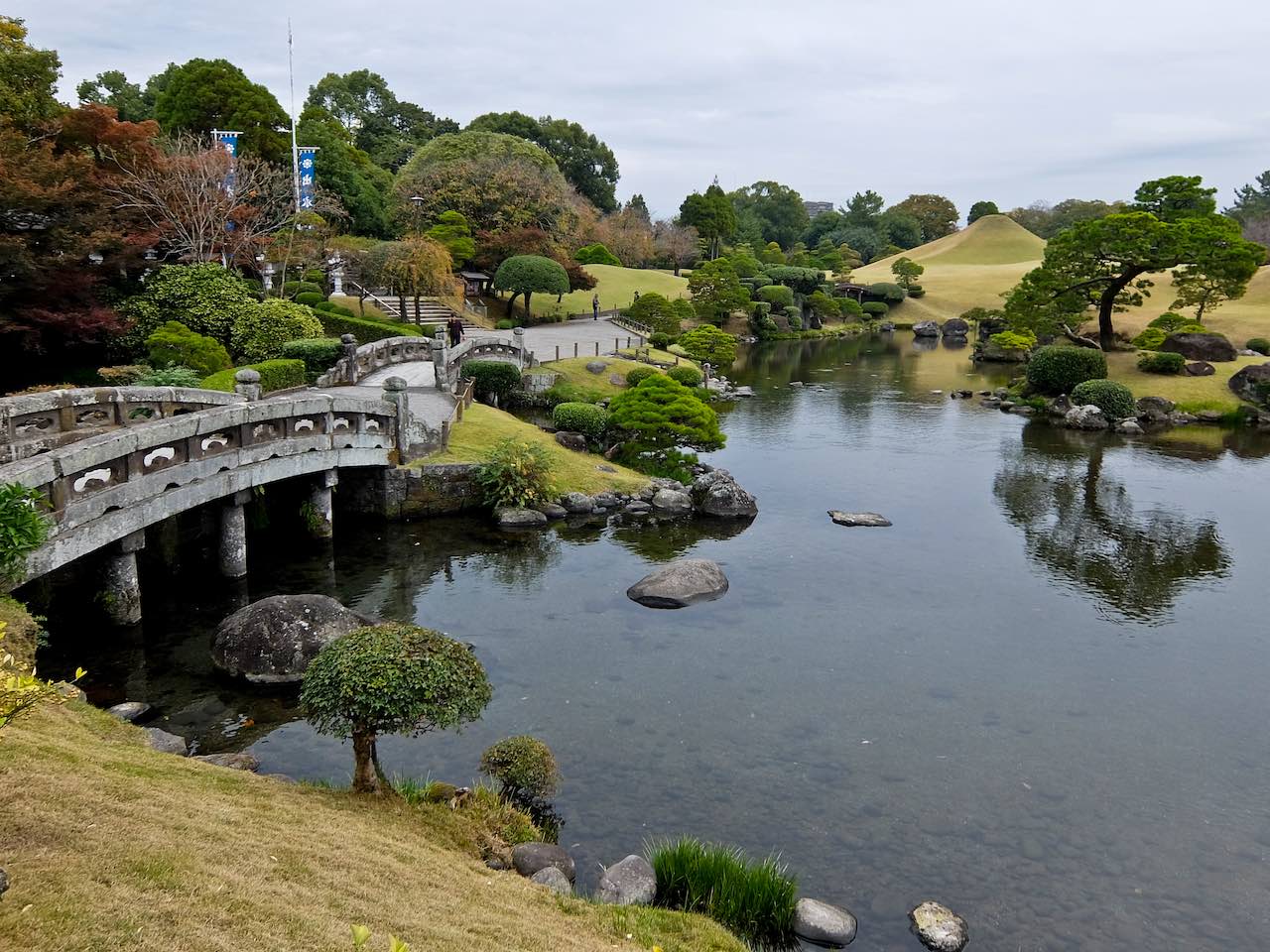 The water in the lake in nearby Suizenji Jojuen Park lost all its water during the earthquake but the gardens were otherwise undamaged. They’re considered to be some of Japan’s most beautiful and go back to 1632 when they surrounded a temple, now long gone. The design supposedly recreates scenes on the road between Tokyo and Kyoto, and there’s a recognisable mini Mount Fuji surrounded by shrubs, miniature pines and plum trees. Sip your green tea in the teahouse and watch the fatted carp swim around the lake.

The water in Kumamato has a reputation of being some of the best in Japan, particularly important when you are making sake. The Zuiyo Brewery, founded in 1867, was among the first to start brewing Seishu (clear sake) when Akazake (red sake) was the only type available. They have their own well and use local rice, originally shipped in by boat. You can take a guided tour round the factory and finish with a tutored sake tasting. It seems like the perfect end to my tour of Kyushu before flying home.

READ NEXT: Travel guide: in and around Nagasaki, Japan

FLY: Japan Airlines flies from Heathrow via Tokyo to Kumamoto, Kitakyushu and Oita (for Beppu).