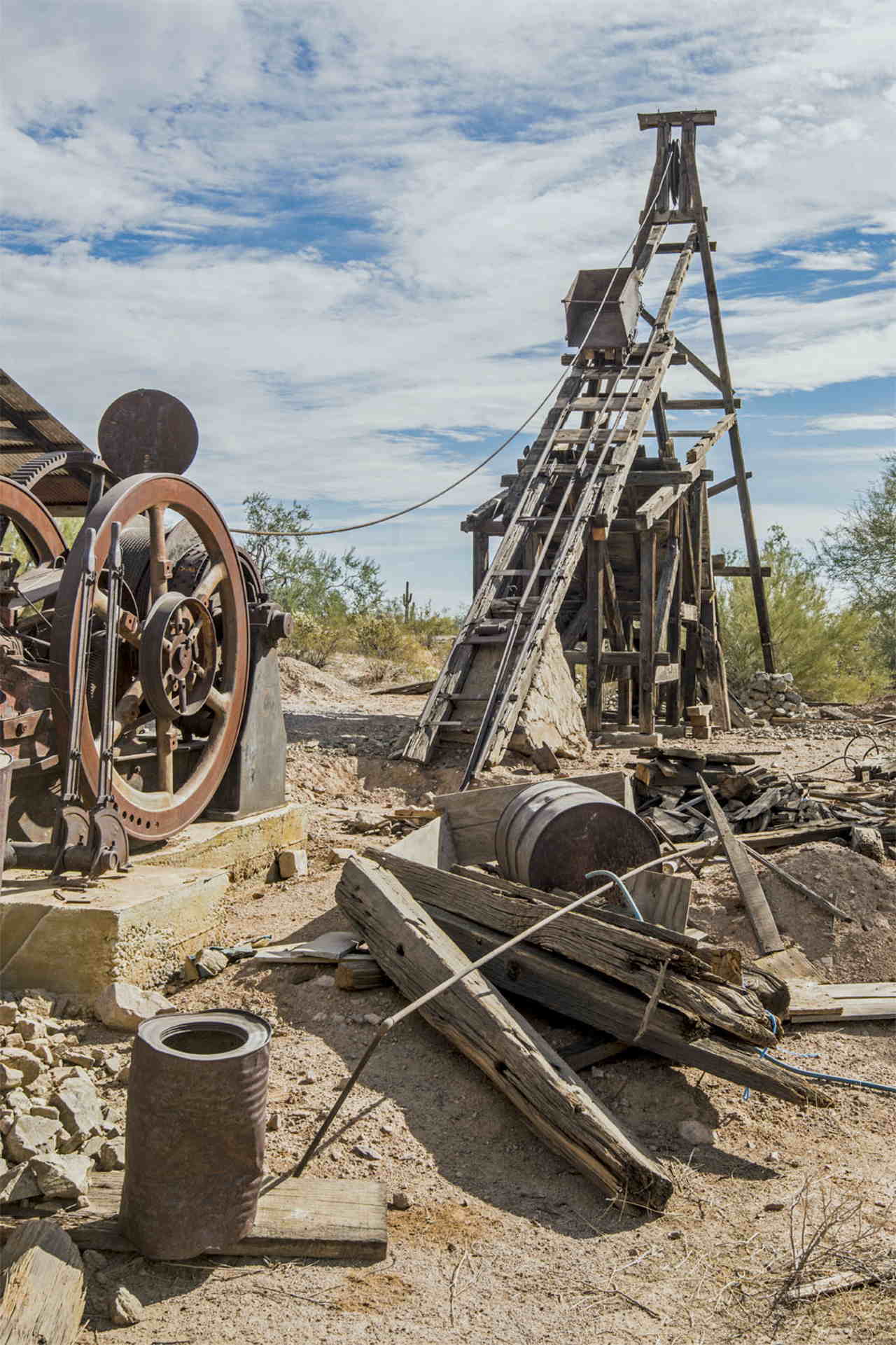 Legend has it that when German immigrant, Henry Wickenburg, walked across the Arizona desert in 1863 towards a pile of black feathers to pick up a dead vulture, something shiny caught his eye. He quickly left the dead bird and picked up the shiny stone. It was Gold!

He had discovered what would become one of the richest gold mines in Arizona, The Vulture Mine.

Over 200 million in Gold and Silver would be brought out of the earth before the mine was closed in 1942. The town that grew around the mine was called Vulture City and at its peak had 5,000 residents.

It is called one of the best “Ghost Towns” in the western United States by ghost town authority and author Phillip Varney in his book Arizona Ghost Towns and Mining Camps, 1980. 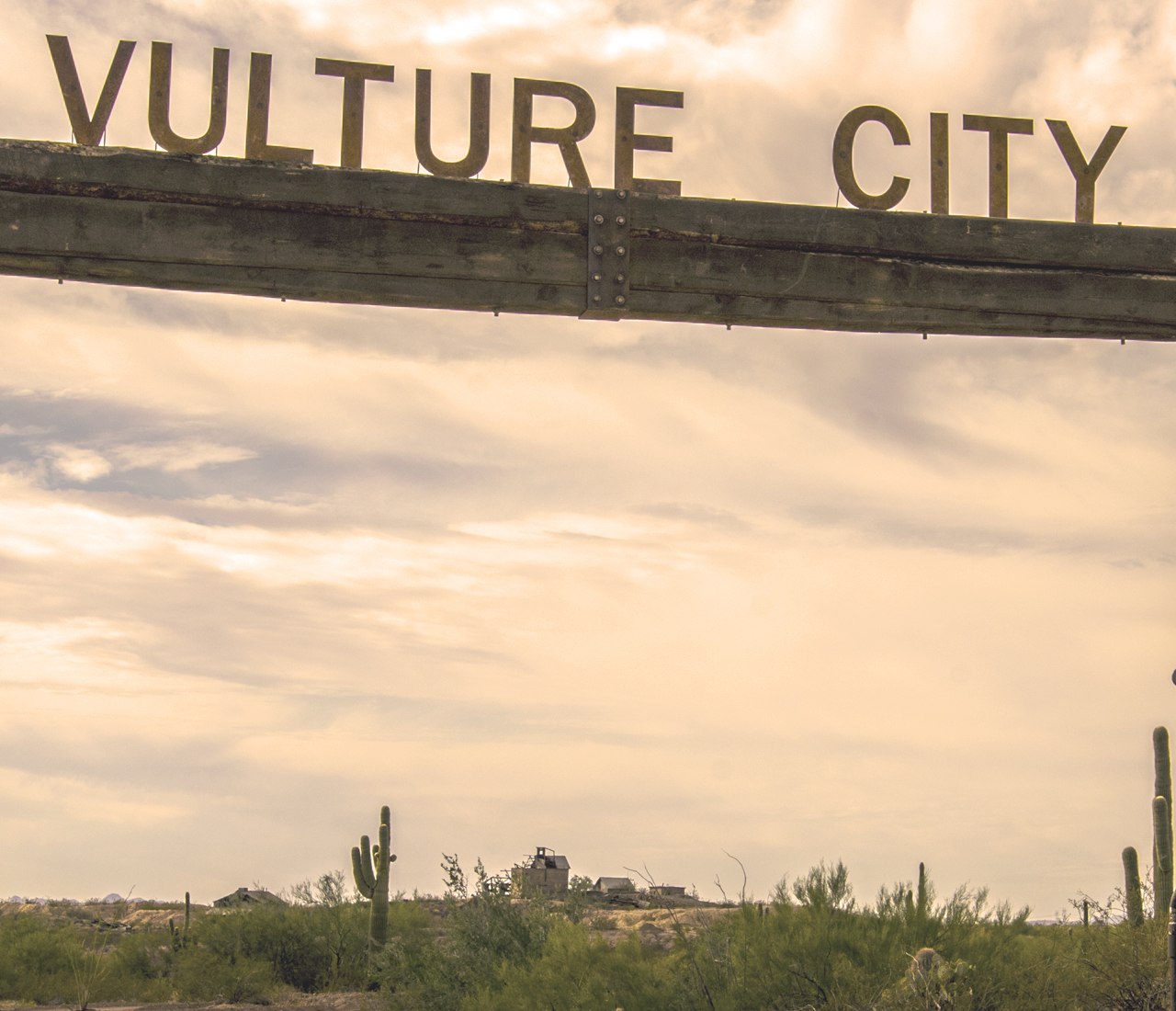 I gazed at the 200 year old iron wood tree standing like a sentinel in front of the restored stone and adobe cabin of Henry Wickenburg, originally built in 1884. Henry sold most of his interest in the mine and his cabin became the town jail. He shot himself when he was 85 and died penniless around 1905. 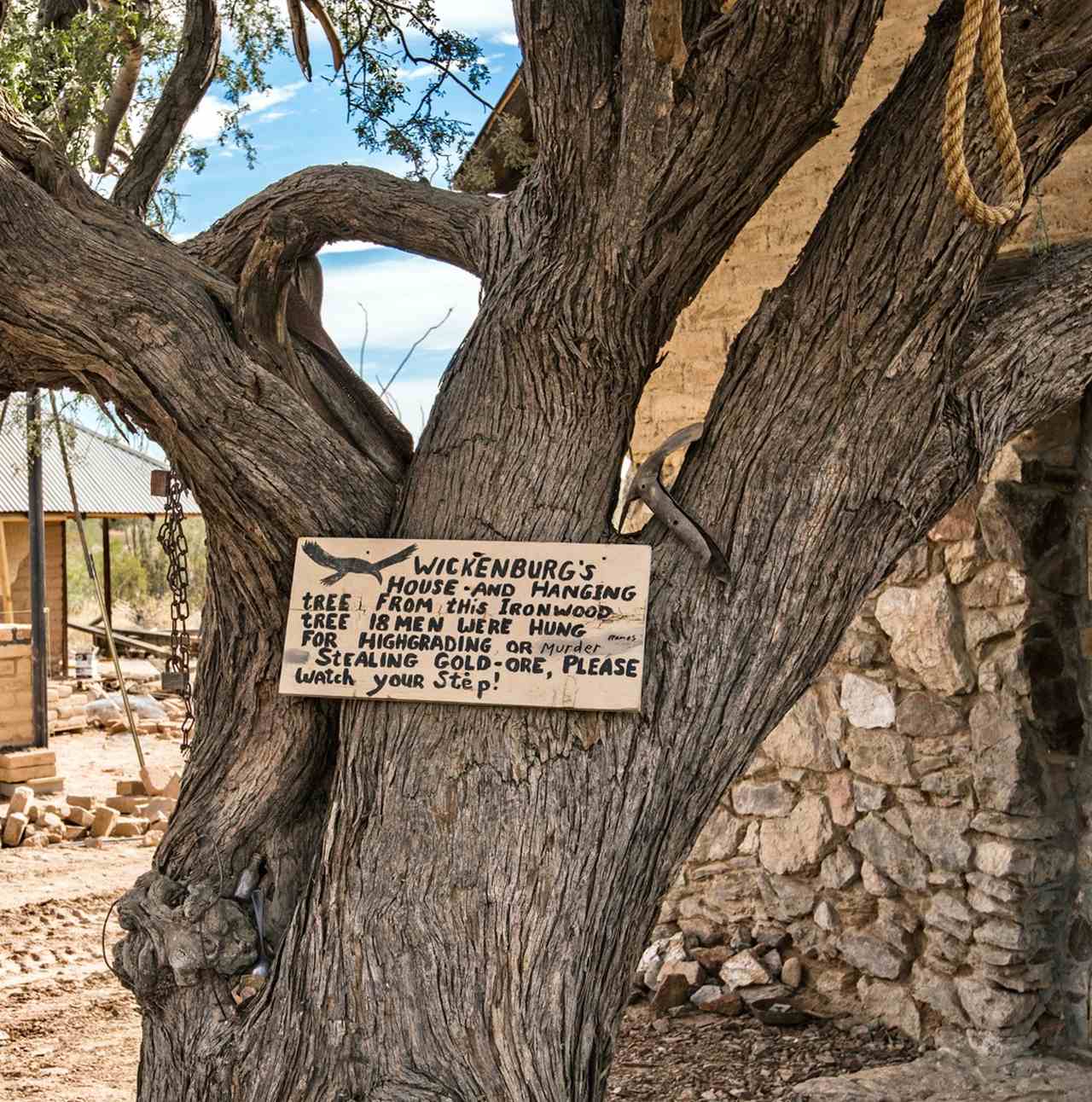 I wondered if the sign on the tree was true that 18 men were hanged from the tree for “high grading”, basically stealing gold. A recently added rope noose dangles from one branch.

One legend says that man named Juan Ramos was hanged on the tree for murdering 15 year old Sabrina Lucero who had spurned his advances. Sabrina was buried in a the nearby cemetery. Over 90 souls were buried in the town cemetery and many more in unmarked graves in the area.

In 1923, several miners working in one of the large underground chambers were killed. The Vulture was a “hard rock” mine and had no need of support timbers. The mining company left much of the ore in place as supporting columns.

One large chamber had ore columns that were very rich in gold. The miners were chipping away at these columns when the roof caved in. One hundred feet of rock collapsed on top of them. The cave-in killed seven miners and twelve burros. They are still buried there legend has it, creating more possible spirits to inhabit the City of Vultures.

Vulture City haunted confines have been featured in books, magazines and even on the television show “Ghost Adventures”. But fact and fiction seem to blur together in the dust of this historic place.

Exploring the nearby restored two story Assay Building, built in 1884, made me feel that I was going back in time.

A Singer sewing machine with its empty chair is poised by an open window, a wooden cabinet with a phonograph stands ready for the next record, a kitchen with canned food still on the shelves seems to waiting for a cook, an old metal bed frame and creaking floor boards enhance that feeling that the people that lived and worked here could be back. I could almost hear music playing and bed springs creaking as I walked through the rooms. 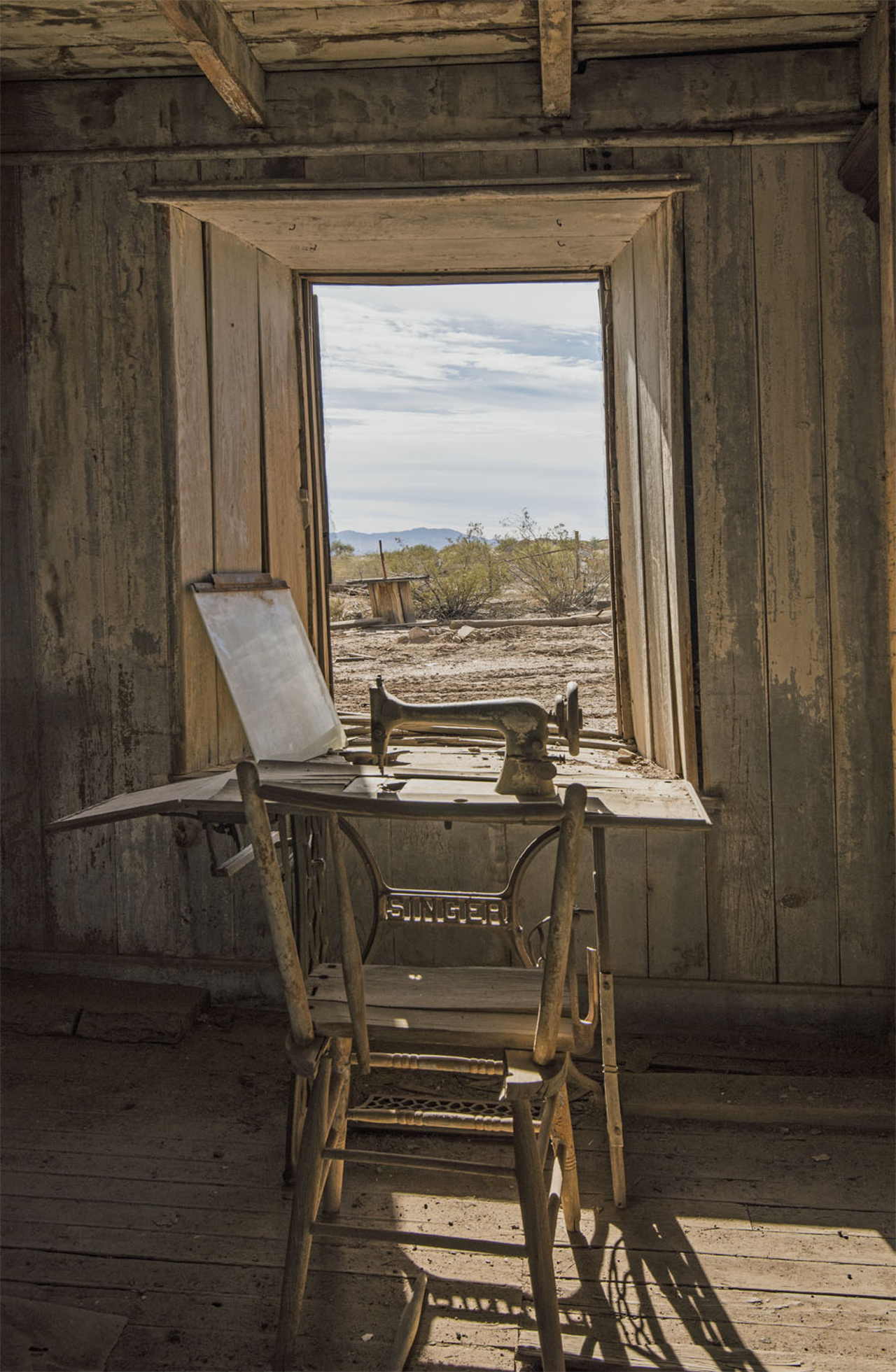 A nearby cook house, saloon and brothel with adobe walls are being restored to support the sagging and sometimes missing roofs. Several more buildings with collapsed walls and rotting roofs stand nearby. One building called Vulture’s Roost is covered in artefacts from horseshoes to old bottles and a sign warning of a rattlesnake crossing. The sheet metal covered fuel shack still has the famed red Mobil Pegasus sign above its doorway with a giant Saguaro cacti standing like an attendant by the old fuel pumps.

The wooden head frame and engine that lowered mining cars down into the earth and brought them back full of ore still stands above the main shaft of the old mine. A mining cart is perched half way up the steeply inclined frame with cables ready for someone to throw the switch.

The town site has much to offer in its current state. You check in at an old shack now called the tour office. The half mile self guided tour allows you to wander among motors, pumps, rusting car bodies, and old elevator cages as well as the several buildings. The guided weekend tour will give you all the history and legends of the sites you will experience.

The gold mine itself was recently purchased and has reopened to mine the remaining gold due to the recent high gold prices. However, the ghost town was kept by former mine owner Ron Prat, who is investing a lot of money to restore Vulture City.

Once the multi-million dollar restoration is complete the town should resemble its appearance during its heyday in the late 1880 to 1920s and could become a major tourist site.

Vulture City gives you a much different perspective on the old west than the more tourist orientated mining towns of Tombstone, Bisbee, and Jerome. Mining was at the centre of the growth of Arizona from mostly uninhabited desert to booming territory to our 48th state. Vulture City is a great place to experience the mining history of Arizona.

TIP: Don’t wait, see the town as it is now and you won’t regret your visit to a real western treasure.

Vulture City is rising up again just like that mythical bird. It has recently re-opened (October 2017) to the public for both self guided and guided tours. These operate only on the weekends and are a real bargain at $10-15. 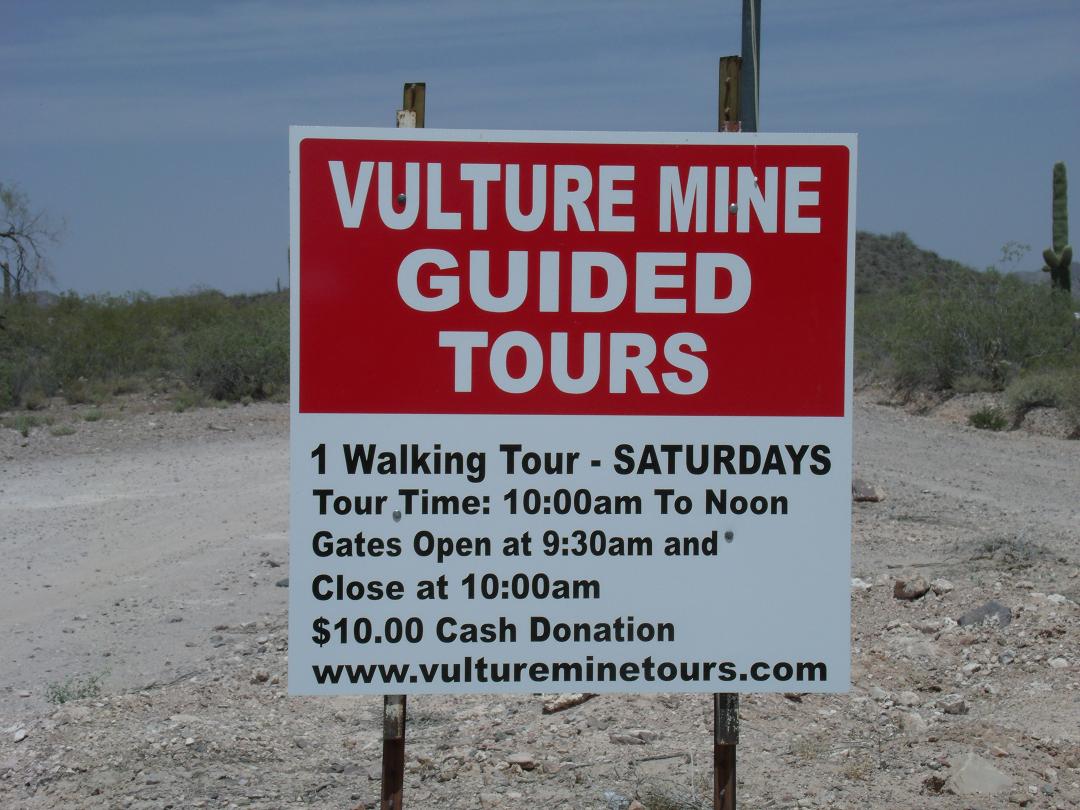 If Vulture City doesn’t satisfy your need for old west history make sure to stop in Wickenburg and take the walking tour of the historic town centre where you stop at statues of town folk that play an audio about the location.

You can see a Jail Tree, historic buildings and a Railroad Depot. The well-regarded Desert Caballeros Western Museum is also worth a stop.

Want to know more? check out Vulture Mine Tours or the Wickenburg Chamber of Commerce.

Is this the end to having to take your shoes off at the airport?