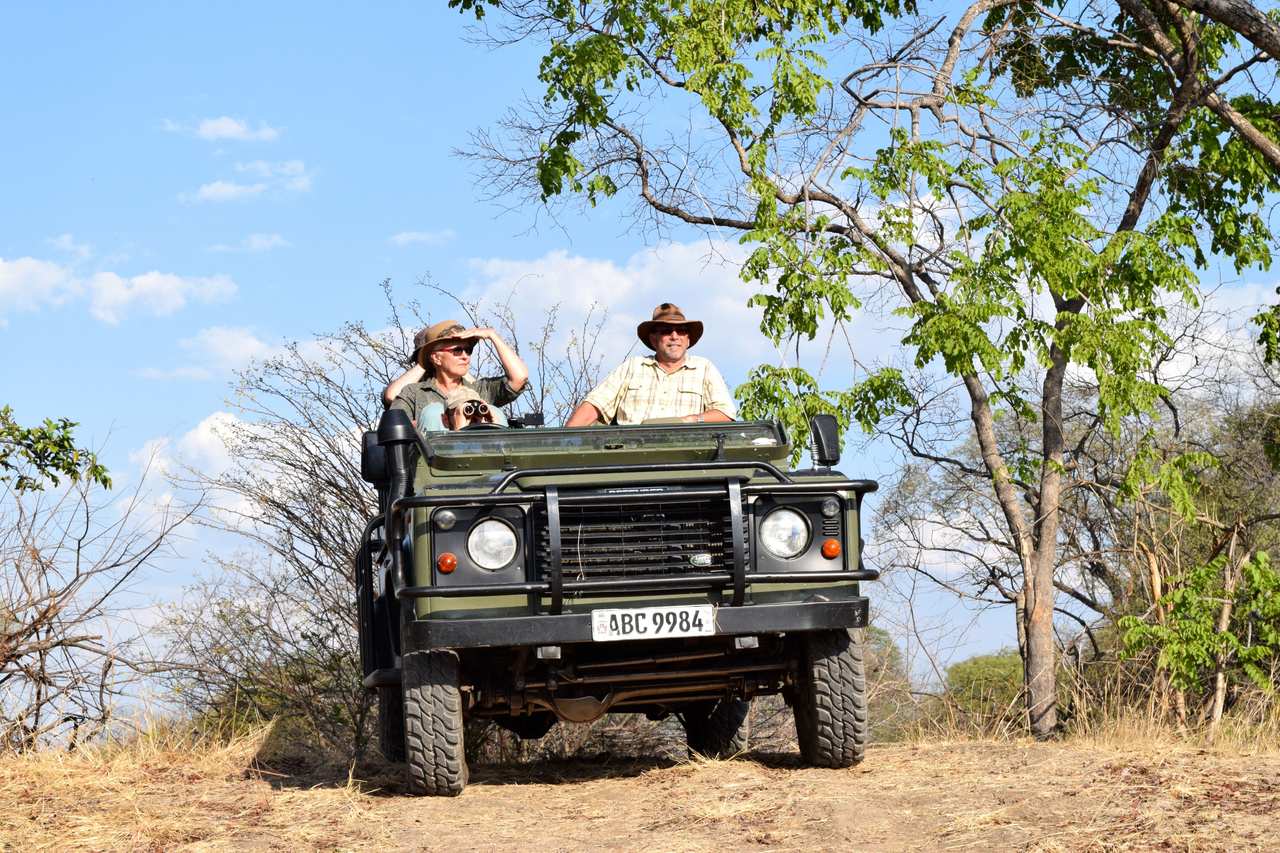 In recent decades Zambia has positioned itself as a strong competitor to East African safari destinations. As the birthplace of the walking safari alongside the traditional truck safari and even a boat safari, this is home to some stunning lodges. And with far fewer visitors than Kenya and Tanzania, it’s worthwhile destination for a safari holiday.

But while most visitors flock to the South Luangwa National Park in the northeast of the country, the rest of Zambia is neglected. If you want to see southern Africa’s wildlife at its finest, you need to travel further afield.

Kafue National Park in central Zambia is approximately the same size as Wales. The Kafue River gives the park its name, and the swampy lands and channels created by its floodwaters draw everything from aquatic antelope to nesting river birds. There are plenty of kingfishers around, so keep the binoculars handy. 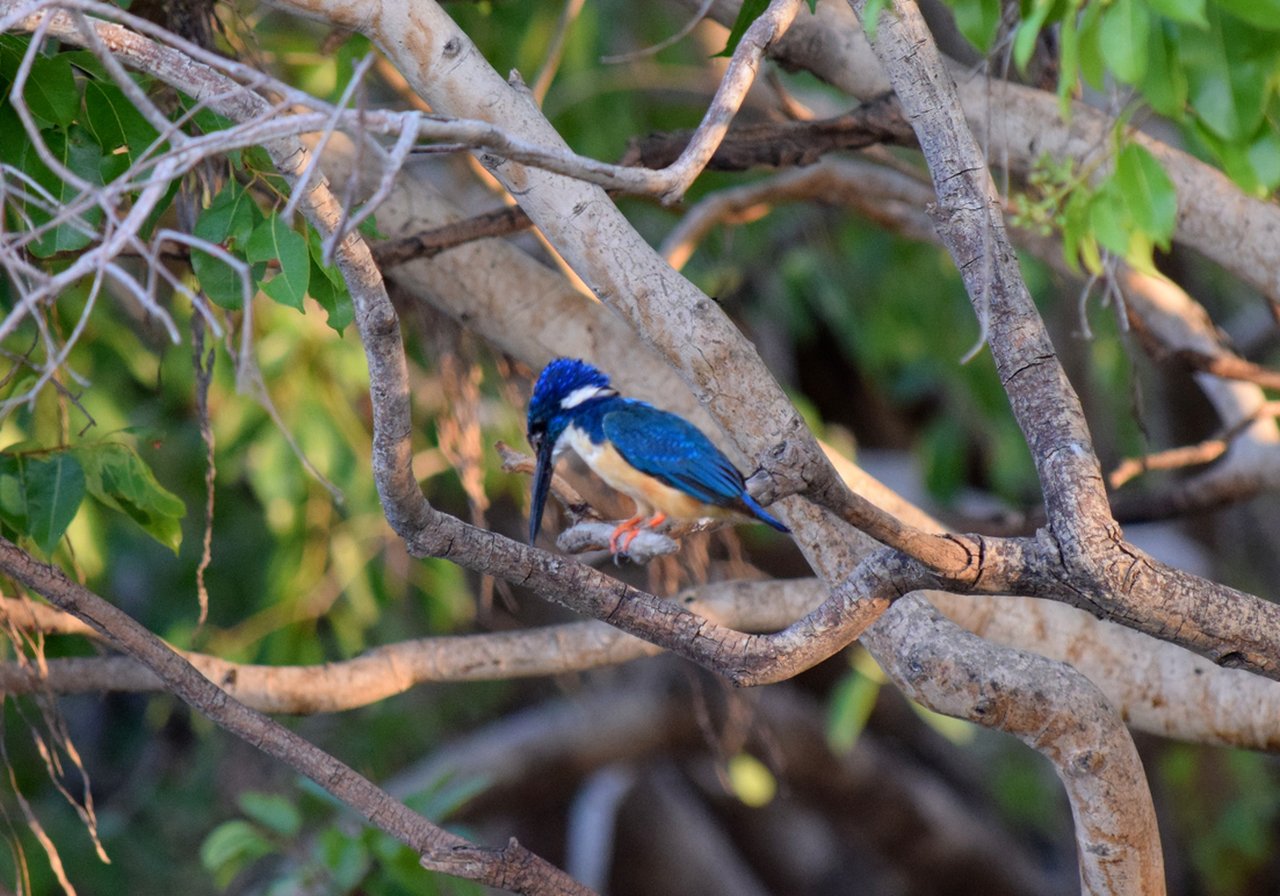 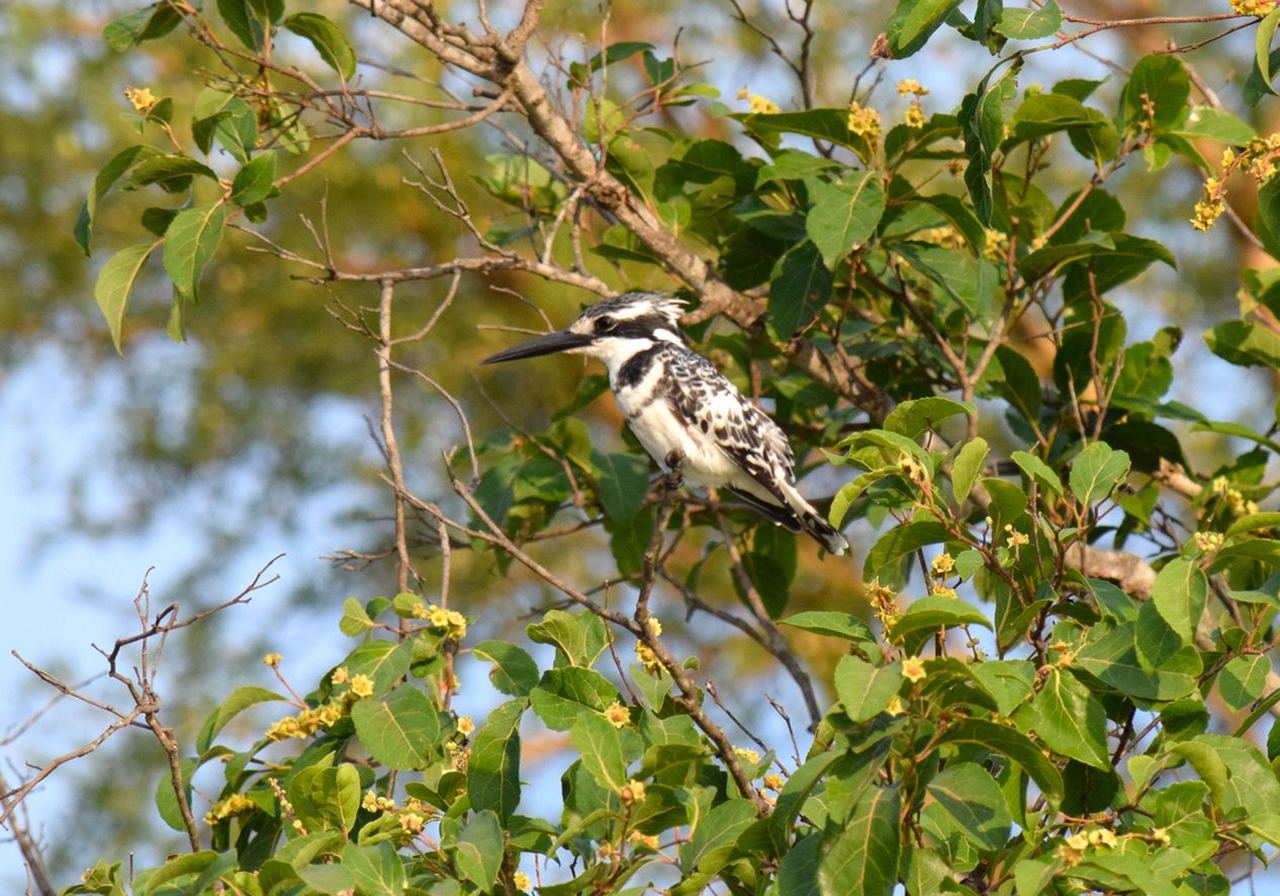 Kingfisher in the Kafue

There are some incredibly high-end lodges here, not least the luxurious Kaingu Safari Lodge, but for me the real appeal is staying somewhere you actually feel you’re in the wild.

Getting to Kafue isn’t easy, but the journey is part of the fun. You can land on the airstrip in a light aircraft, or do as I did and drive the few hours from Lusaka and cross into the park on one of the many unmade roads.

Large areas of Kafue are completely undeveloped and inaccessible, but with the right guide and vehicle (which could be a 4×4 or a boat), there are some extraordinary areas to explore.

Zambia is famed for its walking safaris. Though you cover far less distance on foot than you would on a game drive, you notice completely different things. You have to get out early, whilst it’s still cool and before the animals have retreated into the shade.

My guide, James, met me at Musekese Camp, a relatively new bush camp which has been set up overlooking an open, partially flooded area known as Eden. From the camp’s wooden deck you can watch puku and other antelope, elephant and hippo, and even an occasional lion on the prowl.

The birds love the pools of water, and the black heron whose eccentric dance made its debut on BBC’s Walk On The Wild Side documentary — put on performances which kept us entertained for hours.

I was told once that the purpose of a walking safari is to see about the three Ps: poo, prints, and plants. And indeed it turns out there’s a great deal James can teach you from looking at a pile of dung! Not only can he tell what kind of animal has been past, but also when, and what they’ve been eating.

Elephant poo is especially interesting because they digest so little of what they eat. Plenty of other animals and birds have cottoned onto this fact, so rather than going to the effort of hunting for tasty seeds and grasses themselves, they’ll snack instead on the elephant’s droppings. This is just one of the many fascinating symbiotic relationships in the bush.

Of course when there’s elephant dung on the ground, the elephant themselves can’t be far away. If you’re in a 4×4, that’s not a problem: you can comfortably watch them from a distance. On foot you need to take rather more care.

Elephants are beautiful. They’re fascinating creatures. And they are remarkably gentle with their young. On the whole they are unperturbed by people, but now and then, usually when they feel threatened, they become very aggressive indeed. 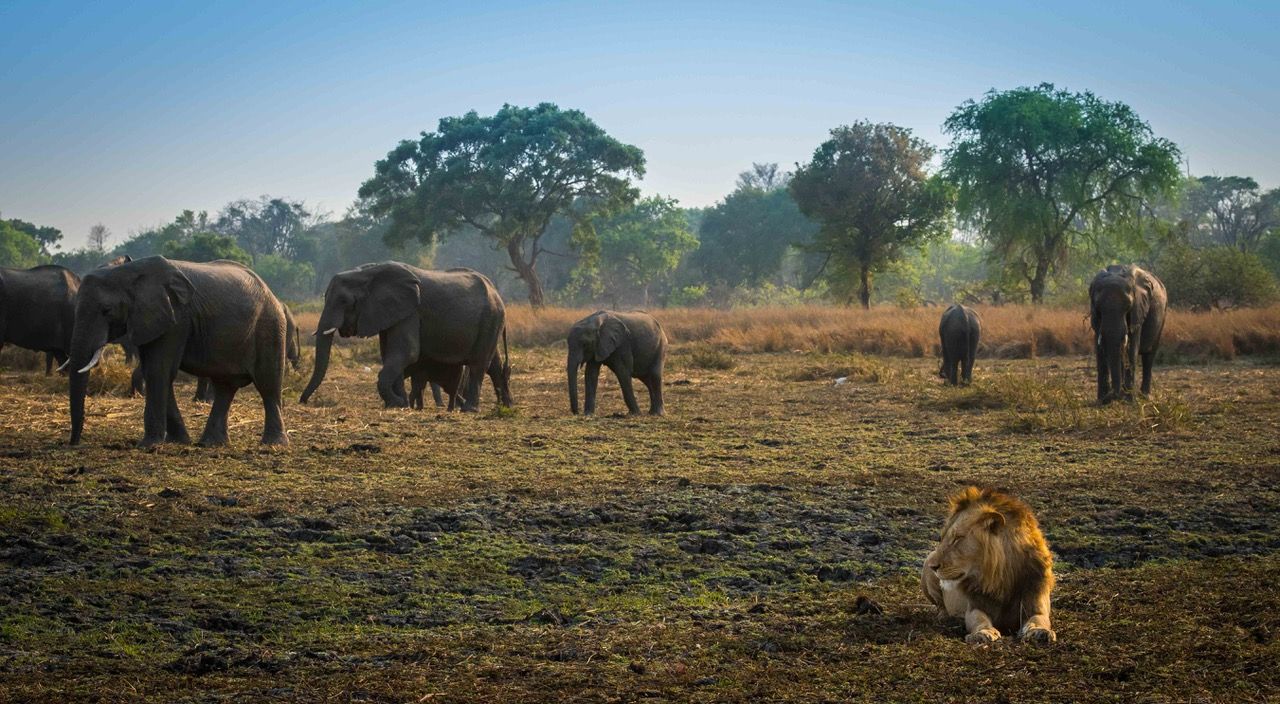 Elephants and lion in the bush

We’d seen fresh dung on our morning walk, and another guide had radioed through that there was a big bull elephant in the area. We kept our wits about us, but rounded a thicket and suddenly he was there.

At James’ non-verbal instruction we first froze, then slowly edged backwards as quietly as possible so as not to catch the elephant’s attention. Thankfully we were downwind, and with the bushes behind us we hoped to go un noticed. An elephant’s eyesight is moderate at best, and this one was not paying particular attention to what was going on around him. Still, my heart was racing.

We stood and watched. The minutes rolled by and I began to feel a little calmer. The elephant was in no rush to go anywhere, as there was plenty of grass to eat, but he did appear to be meandering away. 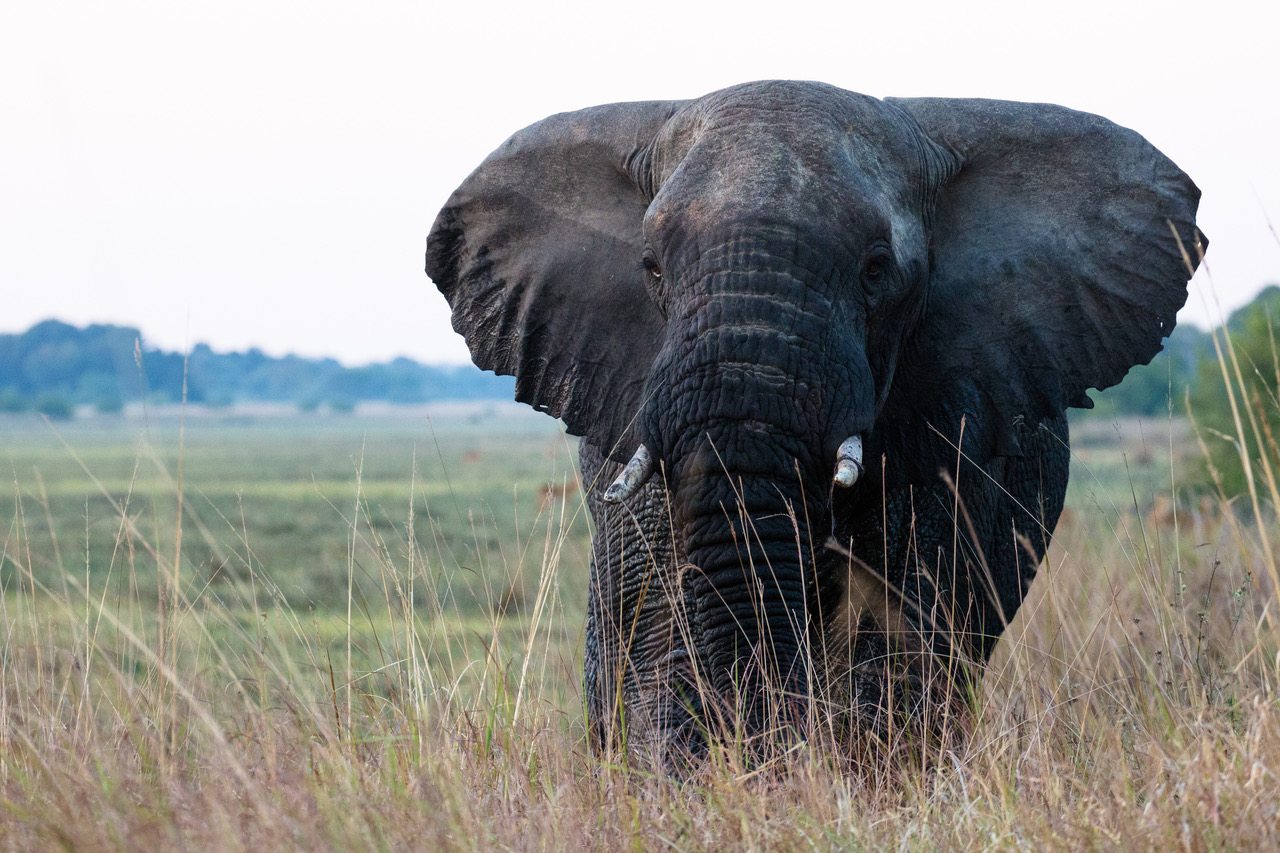 A few puku and zebra had also wandered out into the same open area and were relaxed, which is always a good sign. Finally confident it was again safe to move, we retreated to the other side of the thicket and carried on our way.

Out on the Kafue River

It is a different experience entirely being out on the Kafue River. For one, you have a degree of comfort in a motor boat because you’re less vulnerable to wildlife aggression.

Nothing beats setting sail in the late afternoon. The light is softer, the shadows longer, and animals which have been taking a siesta often stroll down to the riverbank to drink or bathe.

This is also the prime time for bird watching, and you can scarcely go a few metres without some bird or other diving for a fish, calling to his mate, or flapping up from a branch in alarm. The pied and malachite kingfishers are consummate fishermen, and the latter brilliant in their colour. At one point we sailed so close to the bank that we could look inside an owl’s nest, and though the parent owl was already out hunting, the chicks were home and twittering to be fed.

African sunset on the sundowner 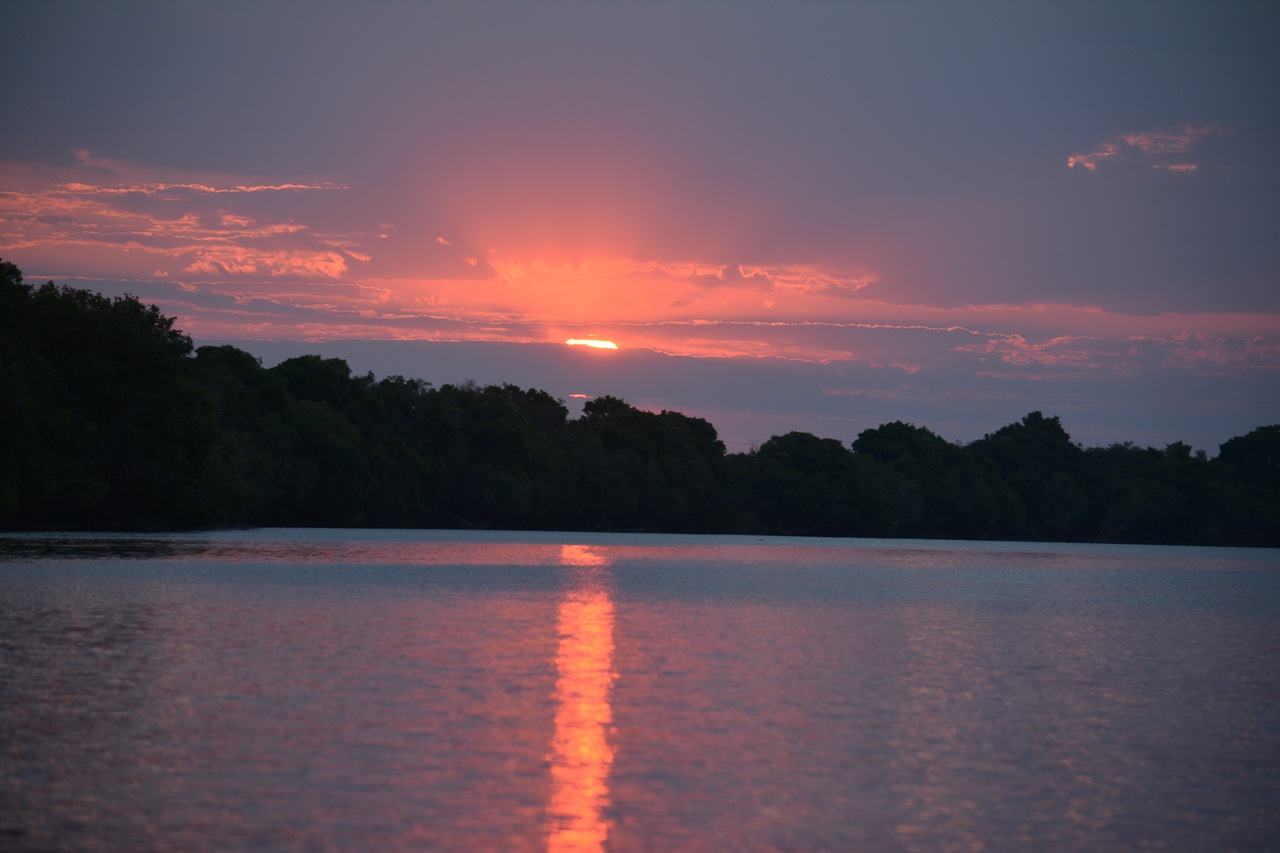 African sunset from the Kafue River

People often talk about the African sunset, and the colour seems particularly intense when it’s reflected back off the surface of a river or lake.

The sundowner drink is a key part of a safari, and the Kafue River is a magical location to enjoy one. We stopped the boat’s motor and drifted on the water, the grunting of hippo the only noise to break the silence. Gin, tonic, and ice appeared from the cool box along with a tiffin full of snacks. The air was still warm, the drink was contrastingly cold, and we sat and we watched and we waited for the sun to go down. The yellow sky turned peach-orange, and then the most wonderful pink.