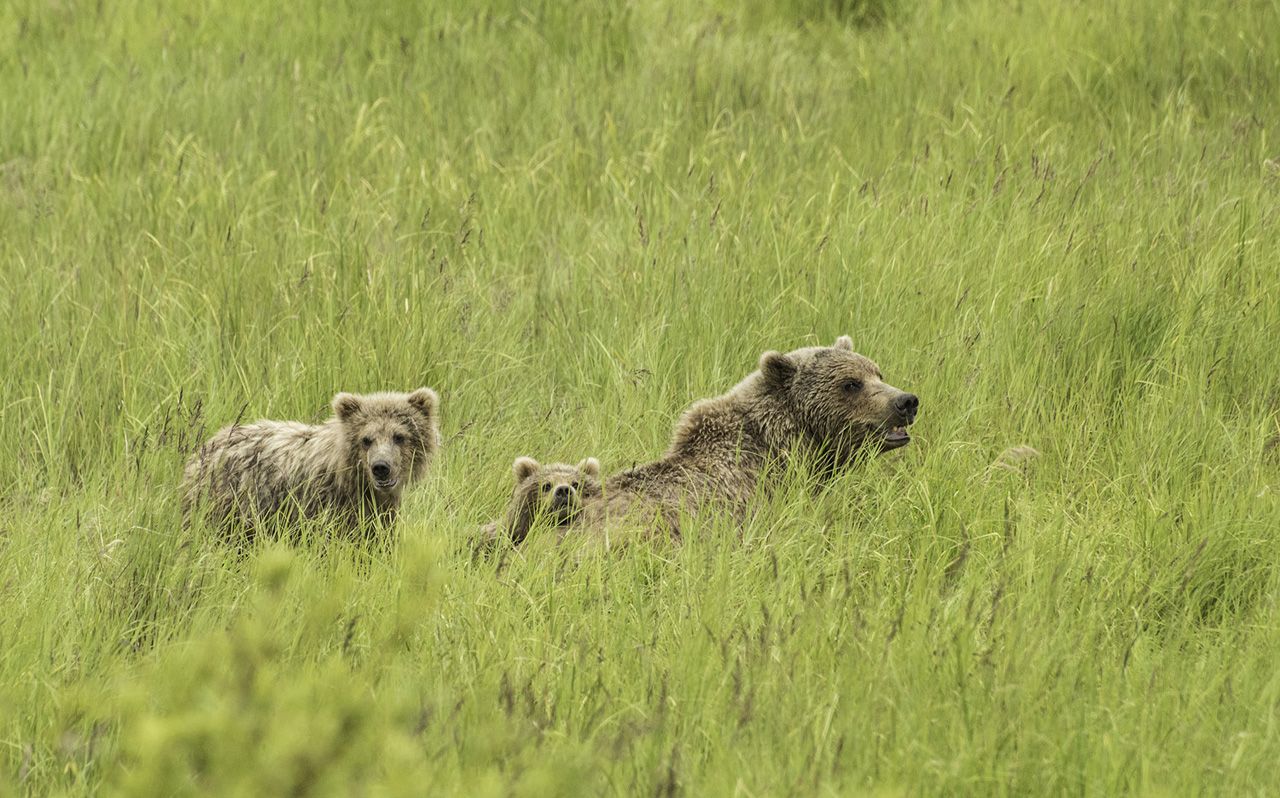 I was just six feet away from a 800lb giant in brown fur with huge paws and a jaw that could cause serious damage. Yet I was able to photograph this huge bear and come away safely.

It was exhilarating and it’s the type of incredible wildlife experience you can only have at the Katmai National Park in Southeast Alaska.

There are around 2,200 Alaskan brown bears that live in this active volcanic landscape that surrounds Mount Katmai and the Valley of Ten Thousand Smokes. They are related to the Grizzly Bears found elsewhere in America.

They hibernate for around seven months of the year and lose a lot of body weight during that time. Of course they wake up hungry and just in time for the summer months when salmon returns to the Alaskan rivers in their millions. This means these bears are so well nourished they soon become plump up and often grow to be the biggest in the world.

So, the best time to be there is during the summer months when you can watch the adept way they fish, feed their cubs and teach the cubs how to fish.

They can be seen at Brooks River and even more so at Brooks Falls in Katmai National Park catching sockeye salmon in June and July and silver salmon in late August and September.

Getting there is an adventure in itself. I had to catch a small four-seater plane and the Beaver floatplane I was in skimmed over the emerald green expanse of Southeast Alaska and ended with a smooth landing on a calm and glassy Lake Naknek finally coasting up to a sandy beach at Brooks Camp.

If I was nervous about arriving at Katmai National Park I was more nervous about getting there in small plane with only one engine. 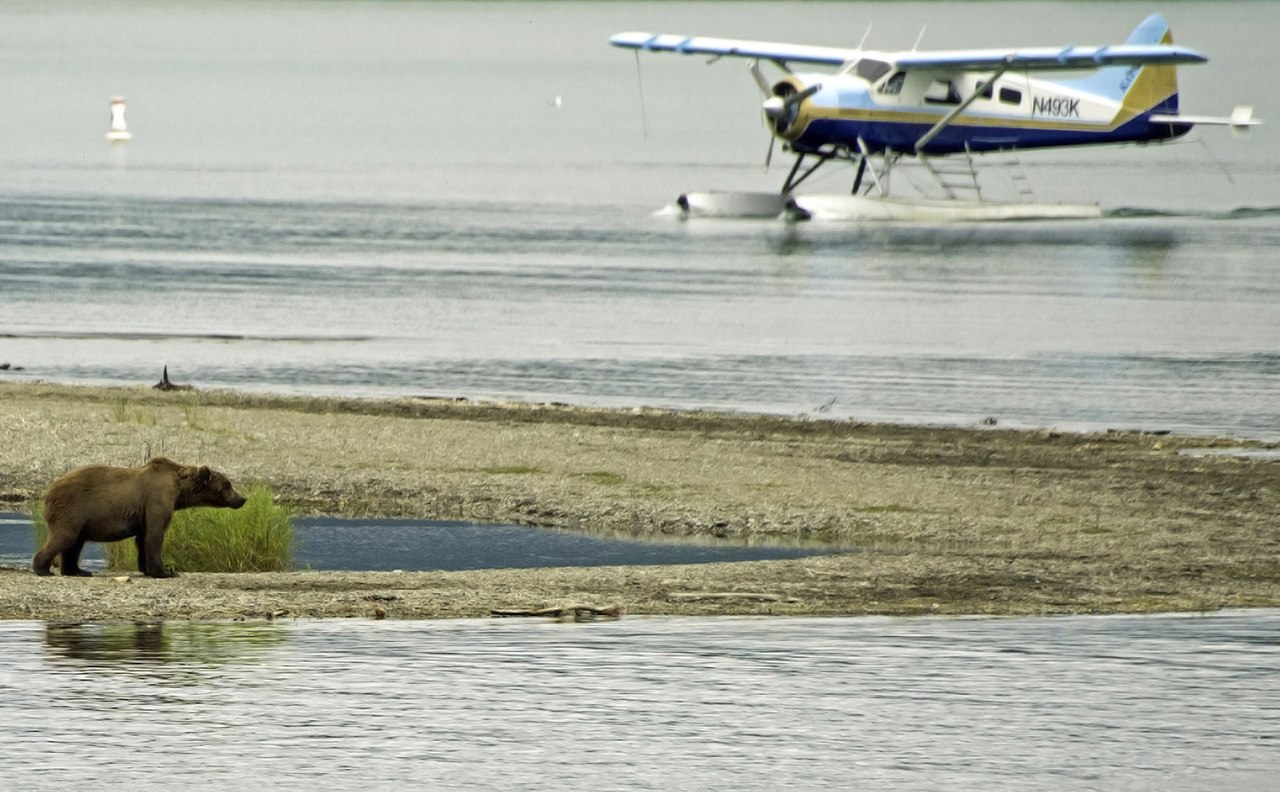 I knew any adventure to Alaska, even in the summer, would be weather dependent. I was there in late July and was lucky that it was warm, partly cloudy with patches of blue sky peeking through the cloud cover.

I couldn’t wait to get my camera out of my backpack and get going but first I had to attend “Bear School” by a Park Ranger before before continuing my trek to the bears. This lasted around 30 minutes and we learned about the bears and their habits and especially how to keep all of your parts intact. The rules of engagement are simple and easy to follow. Testament to that is that I still have all my parts even after having a very close encounter on the trail.

In any case the bears are used to humans and have so much to eat at this park that you can get closer to these large carnivores than you could anywhere else.

Once I receive my “bear” pin I was allowed to take the well-worn trails to the three viewing platforms to catch my first glimpse of the animals. They looked magnificent with their golden or dark brown fur.

I got maybe 50 yards down the forested trail when I and other new arrivals were stopped by a Park Ranger and told we would have to wait as a bear that was passing by. This common occurrence can result in a “Bear Jam” of several tourists waiting to continue their hike to the best viewing platform at Brooks Falls about 1.2 miles from Brooks Camp. I saw Rangers constantly patrolling the main trails to keep everyone safe.

The wooden bridge, over the gently flowing waters of the lower river, swayed as we walked across it to the Lower River platform. This area was quiet and peaceful and the waters so clear I could see the bright red sockeye as they rested before their journey upstream to the falls to pass the gauntlet of hungry predators to spawn.

Once I passed off the main road onto the narrow but well travelled trail to the falls, I began to sing to let any nearby furry friends know I was there. Bears frequent the same trails and roads as often as people do in Katmai and they have the right of way.

I could hear the roar of rushing water and bears growling before I saw the Falls. The bears were fishing.

The viewing platform at Brooks Falls is well worth the hike for the wonderful view of Alaskan Brown Bears fishing for salmon just 25 to 50 yards away. Most of the pictures you have seen of bears catching salmon in their mouths were probably shot here.

During my two evening visits to the Falls I saw 20 or so different bears each time. Several times I saw a sow (female bear) and her cubs stop by to fish too. 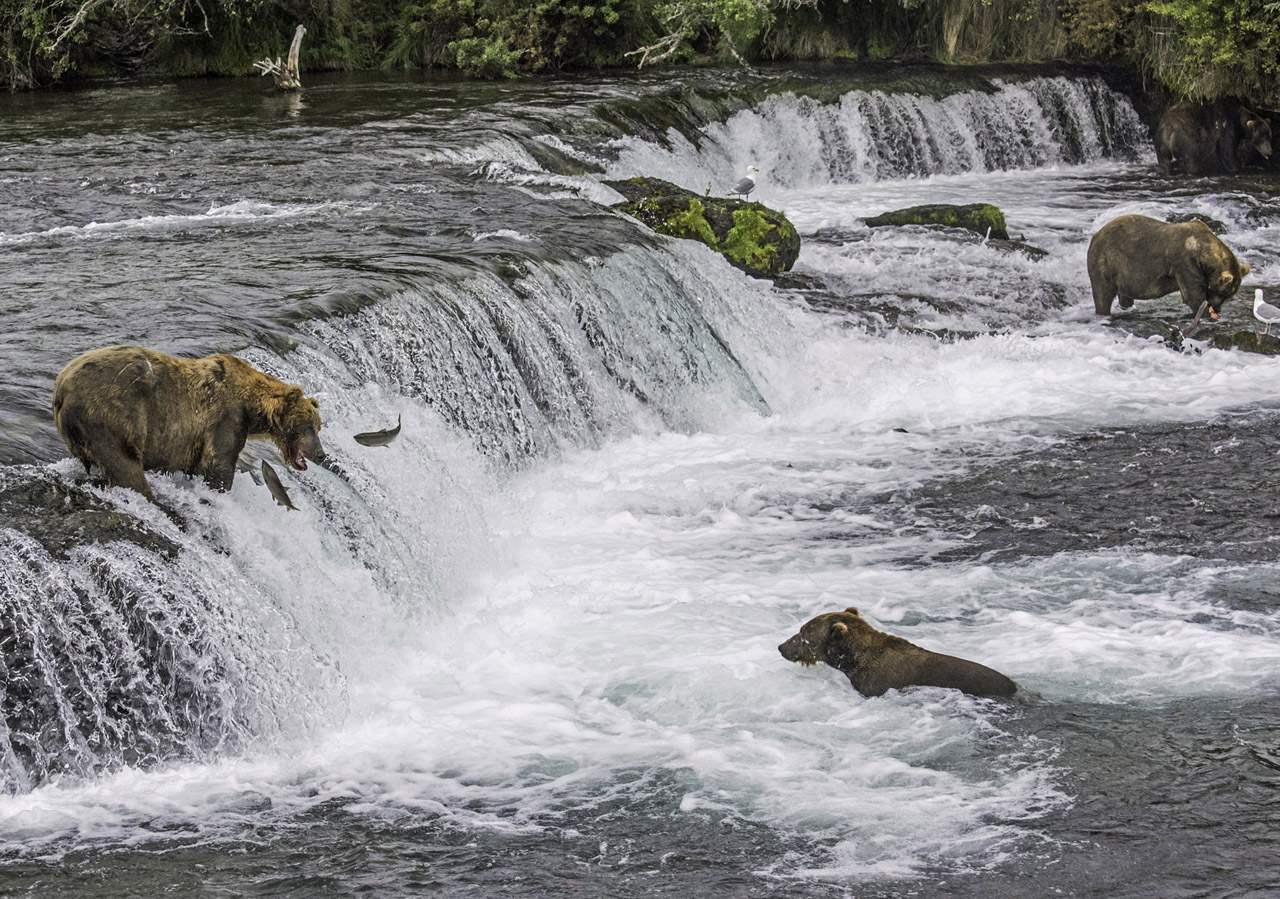 This place is nothing short of amazing and offered plenty of sighting opportunities. I had bears pass by the viewing platform just six feet away. A mother and her three cubs decided to take a nap right below the platform.

A large adult male, named Lefty, had the best fishing spot. I watched him catching salmon every few minutes. He would rapidly eat the bright red fish and go back for more. He had to earn the best spot to fish and has the scars to prove it such as claw marks on his hip and chest and half a left ear missing. Lefty caught so many fish that he had to take a break and just sit down in water to rest. 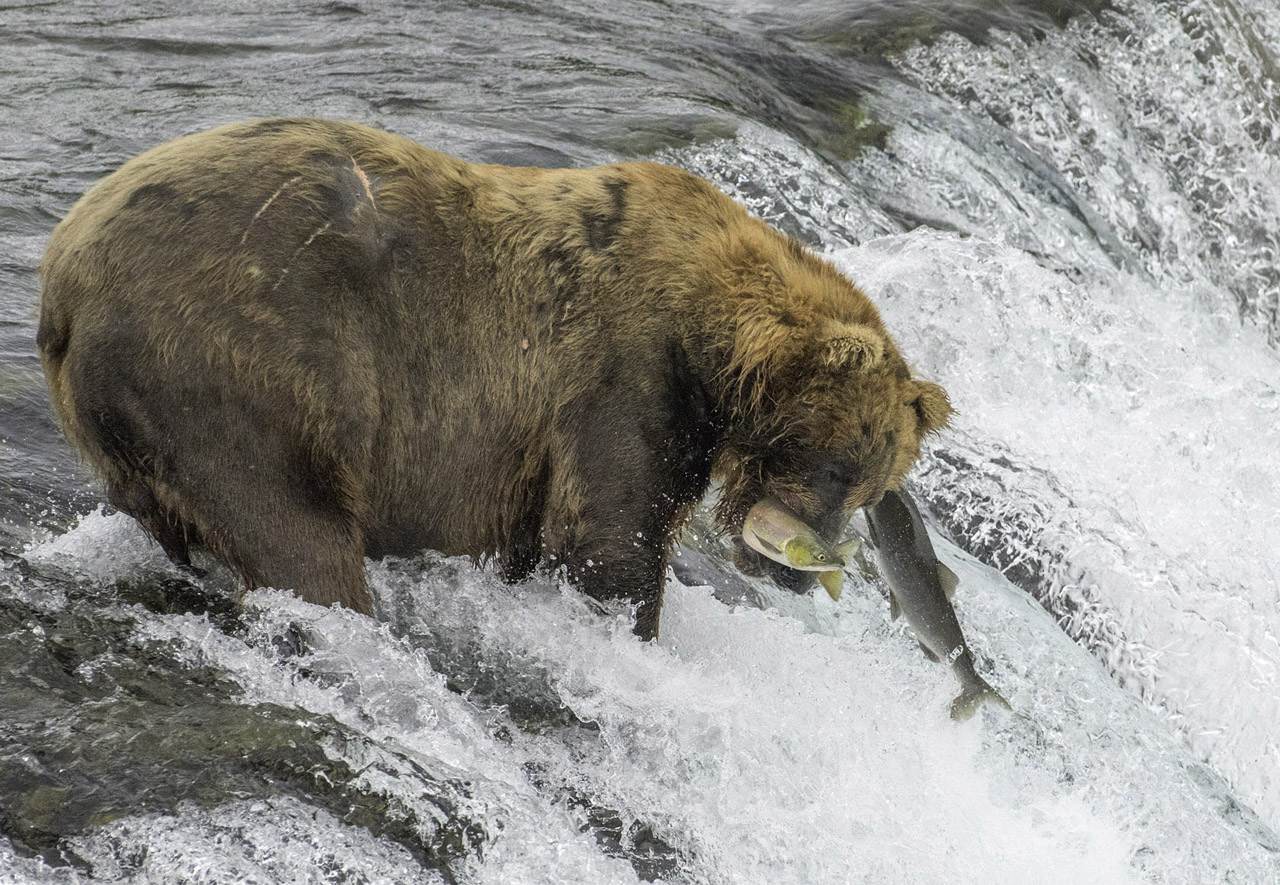 Another bear seemed to just enjoyed the Jacuzzi like waters at the bottom of the falls.  I sometimes got so busy shootings images I forget to stop and just watch this amazing ritual of nature. 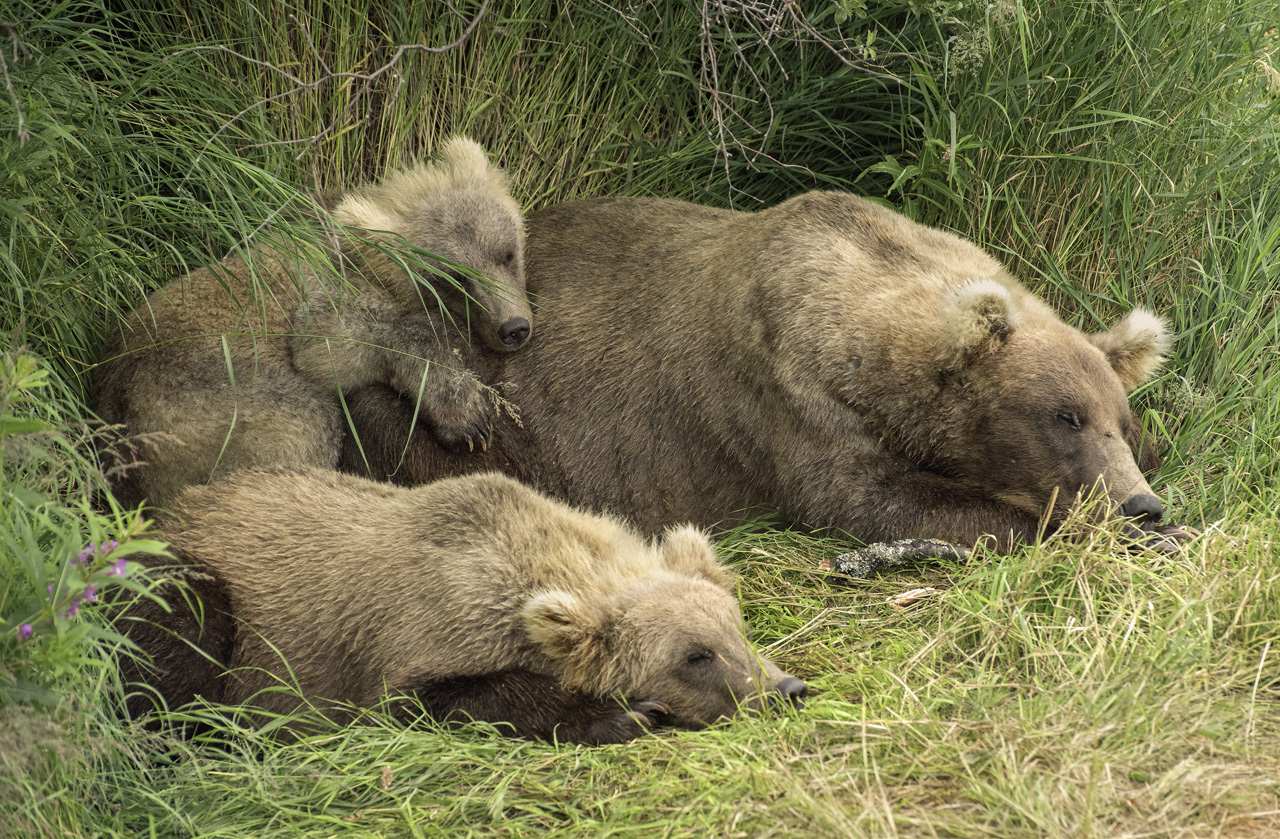 The Falls viewing platform can get crowded during the peak visitor times which start late morning and last to mid afternoon when most of the tourists fly in on day trips from Anchorage, King Salmon, or Homer.

The best opportunities to see a lot of bears is to stay at Brooks Camp either in the lodge or campground. I spent two nights here and it was worth it as my best experiences were early in the morning or late in the afternoon when there were less people around.

One morning, I had the Falls platform to myself. That was when I saw my first bear fight.  A mother with three cubs challenged a young male adult for his spot at the falls. She and her opponent got up on their hind legs and with huge claws out, roared at each other and bared their large teeth. Three cute little cubs watched from nearby. The female prevailed and the young male moved off. 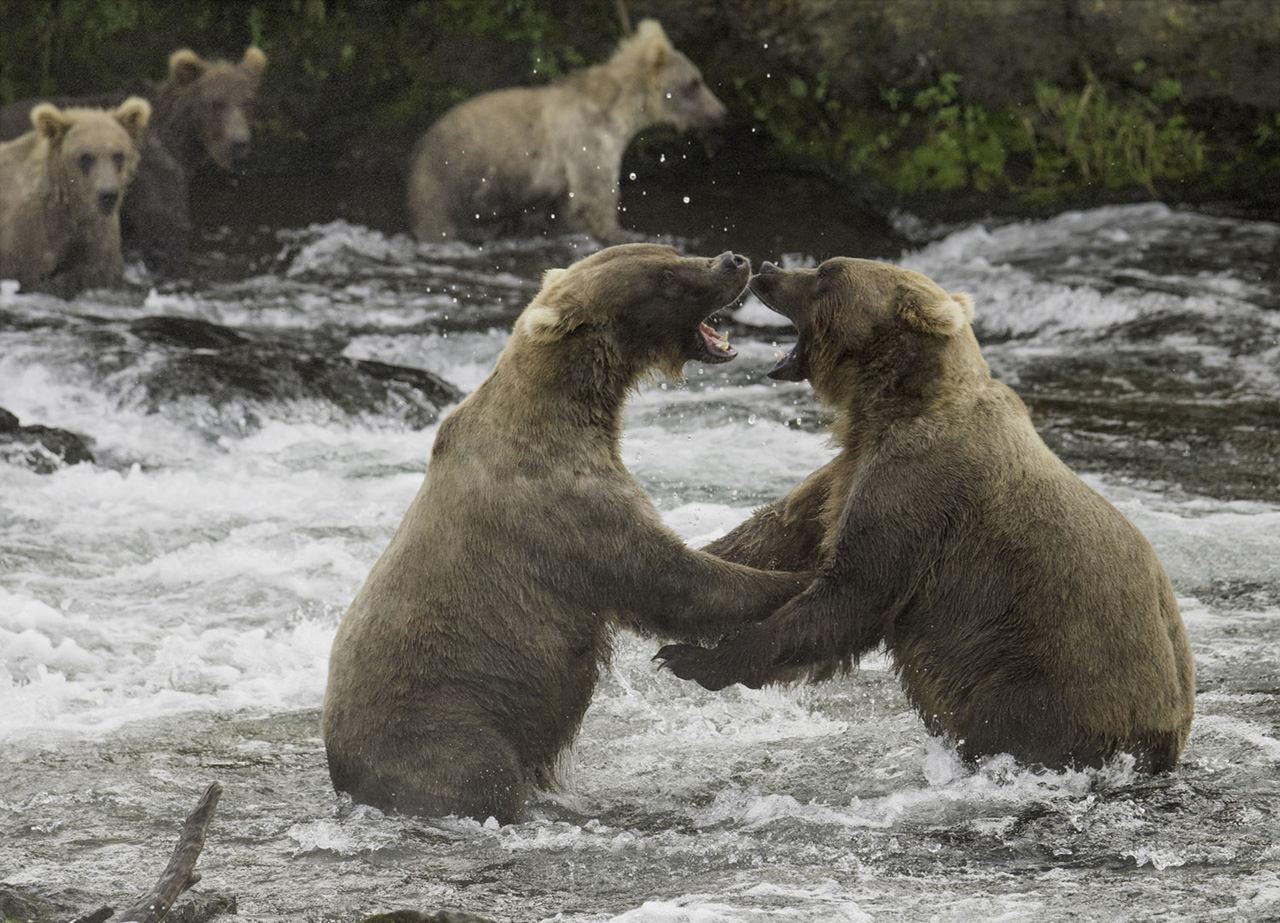 I almost missed the sign for the Mid-river platform. I was thrilled to see another sow with dark brown yearling cubs working the riffles for bright red salmon as the morning sun broke through the clouds to light up the river.

You can also experience the desolation and beauty of the Valley of 10,000 smokes while at Katmai to see a wondrous area left by the largest volcanic eruption of the last century. I missed this experience as I was too busy shooting bear pictures.

Getting to Katmai National Park

Getting to Katmai National Park is not difficult but it is a remote location that can only be accessed by plane or boat. Most people fly there on regularly scheduled commercial flights (PenAir and Alaska Airlines) into King Salmon (AKN) airport from Ted Stevens Anchorage International Airport (ANC) and then take a 30 minute float plane trip to the park.

Tip: Be prepared: nothing in Alaska is cheap during the summer but this experience is well worth the bucks.

Tip: You should also make your reservation several months to a year in advance as they fill up fast.