Billionaire crashes jet-ski to celebrate a hotel opening in Sweden 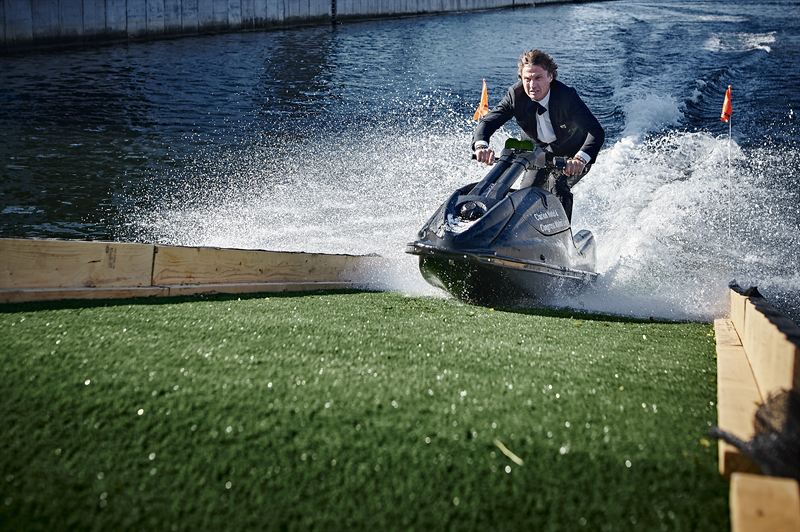 When Petter Stordalen, the billionaire hotelier came thundering on a jet-ski through the canals of Malmö in his hand made Balmain-jacket, thousands of baffled spectators thought they were on the set of Mission Impossible 5. Then he crashed head first into the concrete stairs.

Why? To open a hotel.

Named the “the flashiest Scandinavian on the planet” by Forbes Magazine, the 52-year old Petter Stordalen has completed an Iron Man race, been chained to a bridge while protesting a UK nuclear treatment plant and once did a double Arabian flip on stage with Prince.

His latest stunt, culminated in  a double doughnut on the water before crashing his jet-black jet-ski onto a ramp. But the jet-ski, due to the excessive speed, continued passed the ramp into the stairs, propelling Stordalen into the concrete stairs. High on adrenaline Stordalen, with security guards and media in tow, ran through the crowd and jumped on stage screaming “Malmo!” And just like that, in front of 10.000 thousand Swedish celebrities and business leaders, Clarion Hotel & Congress Malmö Live – the 400 million dollar development that is changing the Malmö shoreline  – was inaugurated.

The Norwegian daredevil and billionaire (his estimated fortune of 1.6 billion USD) is known for his spectacular hotel openings. For his hotel on Arlanda airport he spent two days practising Australian abseiling, before running down the facade of the hotel to mark the opening of the 57 meter tall hotel.

For the opening of his hotel in Drammen, Norway, he set fire to an electric guitar onstage and for his 200 million dollar Clarion Hotel Post in Gothenburg, Sweden, he descended from the ceiling inside a giant disco ball rigged out with drums he was playing. Three months later he opened a giant hotel in Trondheim, Norway, driving through the audience on his 2200 cubic custom built motorbike. In Tromsø, for Hotel The Edge, he did off-piste skiing together with two Olympic Medalists.

And now, for the opening in Malmö, according to Stordalen it is Europe’s first combined hotel and concert hall, he went even bigger. On huge outdoor screens the audience could follow him descend from his Riva Rivarama onto his jet-ski, jetting full speed in the canals of Malmö finally arriving like something out of a Hollywood-movie by hitting a ramp and crashing on the concrete, jet-ski and all.

Thousands of people had gathered in the Swedish city, recently ranked the world’s fourth most innovative city, to watch Stordalen open the city’s new landmark hotel, Clarion Hotel & Congress Malmö Live. A project which is basically a city within a city.

“We knew he was a sporty dude, but we have never seen anyone drive a jet-ski like that. Zero f**ks were given, he just went for it.”

2 bedroom apartment with a swimming pool on French Riviera