Camden Town according to Rose Blanchard 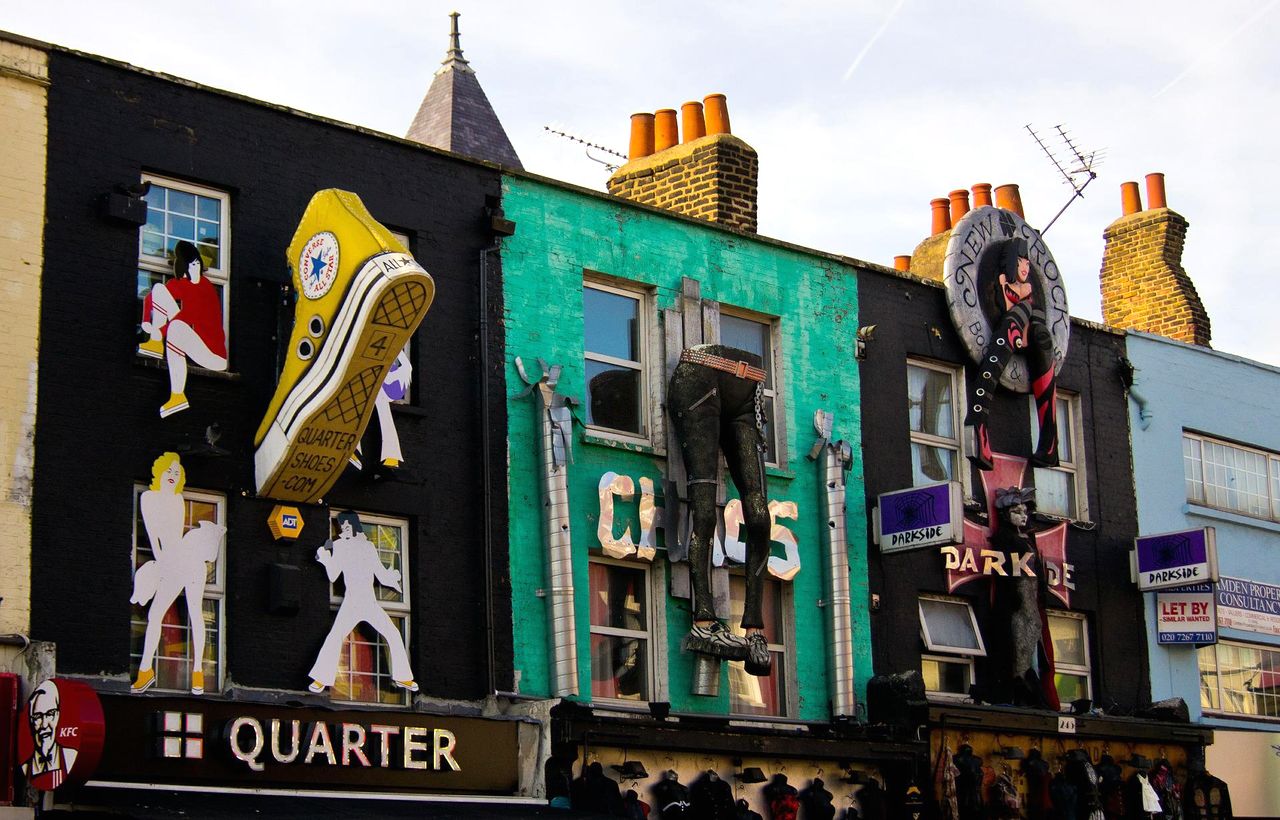 SoI have lived in London for nearly two years, and what an experience it has been. Having moved from a quiet town in Wiltshire, London makes quite the change and Camden has become a staple of my day to day existence.

I knew Camden fairly well before moving here as one of my nearest and dearest lived in Primrose Hill (very close to Jamie Oliver, I’ll have you know).

She was a singer-songwriter, so we were very in tune with the Camden music scene. She also worked in a music shop called Camden Guitars situated in the notorious Camden Market, so when I came to visit we would walk the market for a couple of hours while I waited for her to finish.

My first impression of Camden was mixed. On one hand, I had a natural warmth to the location because I associated it with my friends and pubs and music; on the other hand, it had this touristy, pickpocket vibe that made me slightly cautious when walking there later at night. But I’m probably getting ahead of myself.

A walk around Camden Town

For those of you that have never been to Camden, let me paint a picture for you. 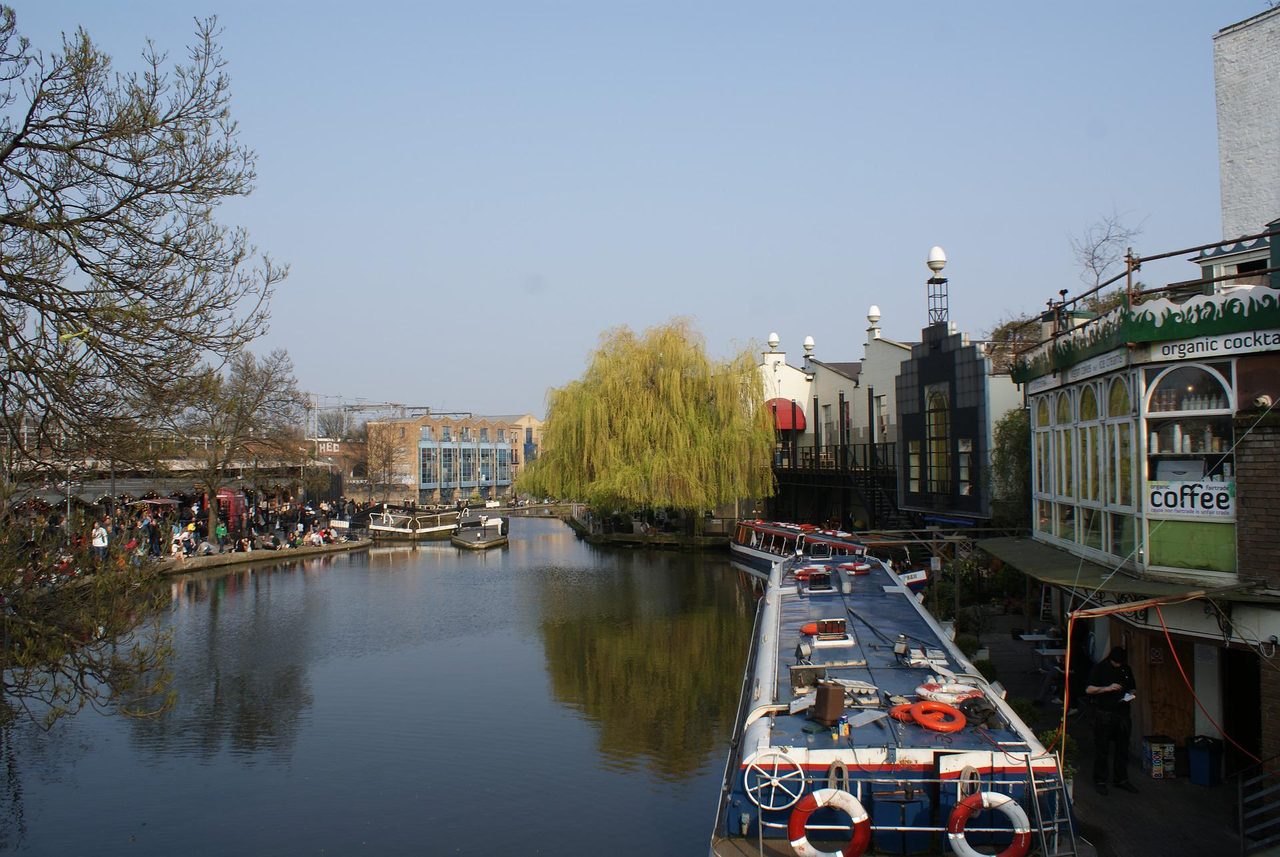 Camden is located in the North of London. It’s pretty flat on the whole and it features the 8.6 mile long Regents Canal. Camden Town, often shortened to  Camden by locals, is known for being a hub for stand up comedy, jazz, blues and steampunk fashion. But probably the most interesting thing about Camden is its high street.

You walk out of Camden Town tube station, it’s Friday, and you may see a guy with a mohawk, a girl with an orange wig that is almost as tall as she is, a woman covered in bangles who wants to tell you all about how the world is going to end.

You hear music, as you turn left out of the station and directly in front of you, you see a busker, speakers up to the max with a small crowd around him swaying as he puts his own Indie spin on Bruce Springsteen’s ‘Dancing in the Dark’. People are passing you constantly, you turn right, and start walking towards the canal. At first, there’s nothing too unremarkable. A JD sports, Holland and Barrette and an Urban Outfitters. 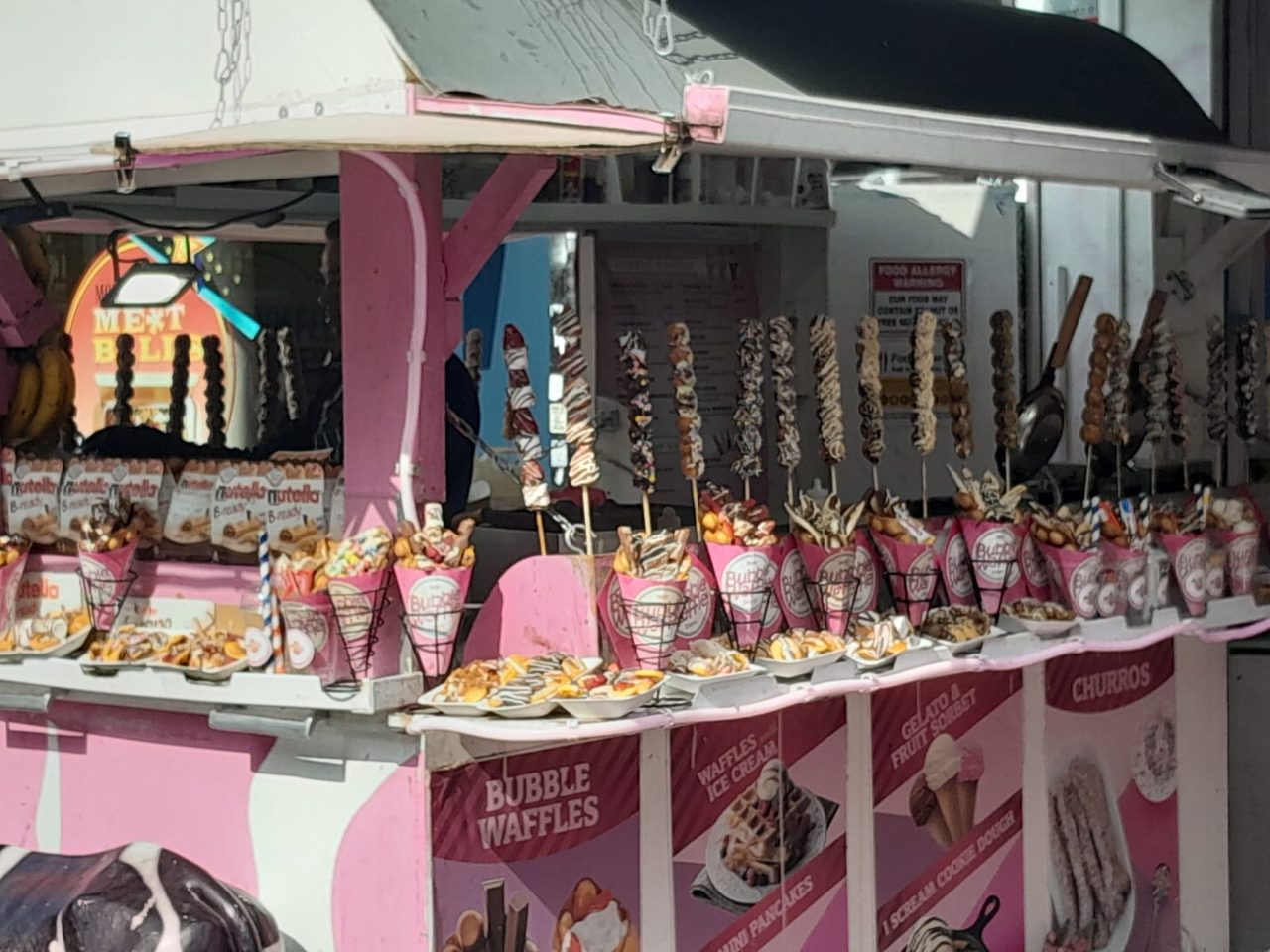 It smells sweet though, and that’s when you see a purple shop called Bubble Waffles. The chocolate fountain is glistening next to a display of waffles, strawberries and sweets all stuck onto kebab sticks patiently waiting to be dunked.

But before you can even take it in, you are distracted by the giant converse trainer sticking out of a building further down the road.

You march closer and see a bunch of shipping containers that have been converted into a jewellery shop, a burger joint, and signs like ‘a tidy house, is a wasted life’ and ‘live laugh love’- that kinda jazz. 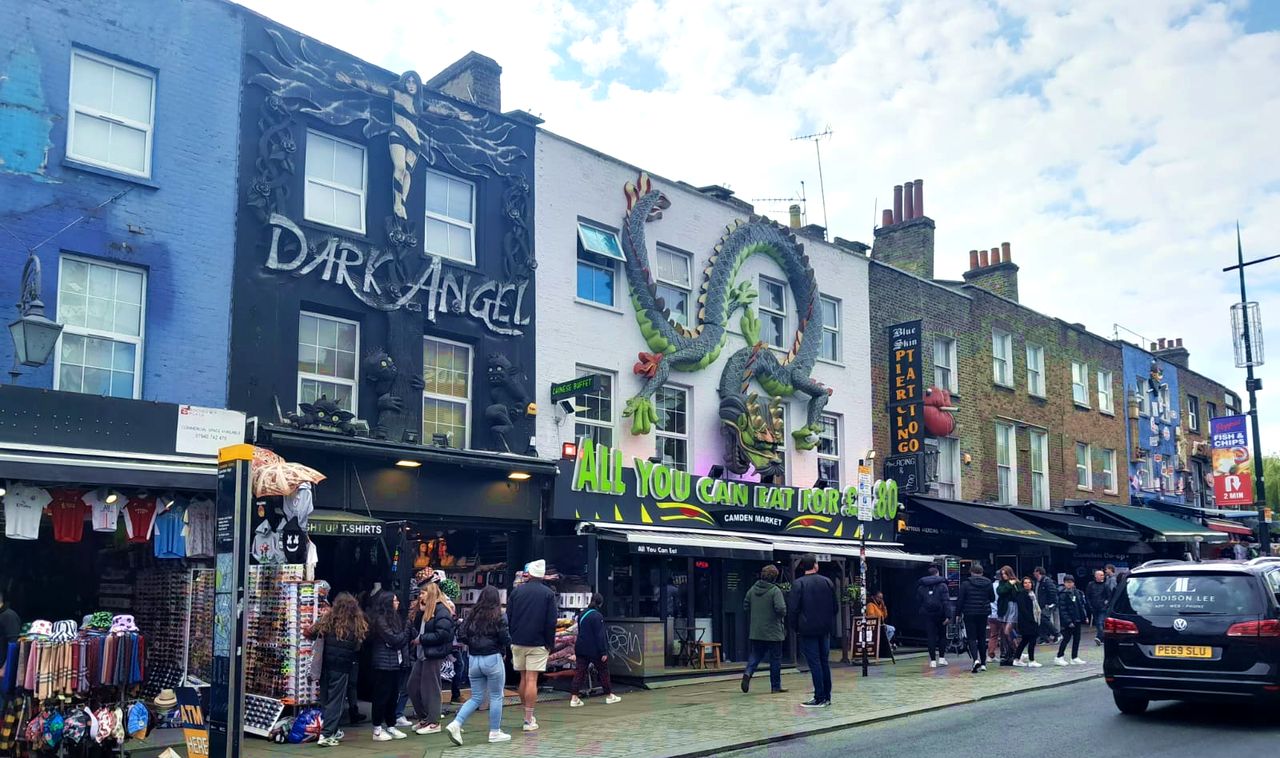 All you can eat

The buildings are crazy and the architecture is a multicolour wonderland. Even the zebra crossings are rainbow.

There’s a dragon mounted on an Asian all-you-can-eat restaurant and tattoo shops galore. It's an excellent spot to get a reckless travel tat - there are sunglasses in every shape and size and knock off t-shirts left right and centre.

A little bit of history

Charles Pratt, the first Earl of Camden, started its development in 1791. Prior to the opening of the Regents Canal to traffic in 1820, Camden Town began as little more than a small cluster of buildings beside a main road.

With this new transport link, Camden become a hub of activity. The local population grew along with job opportunities and earning potential.

In the 1970s, Camden Lock's wharves and warehouses were converted into the whacky and unusual craft markets we have come to love securing Camden as one of London's top tourist attractions. 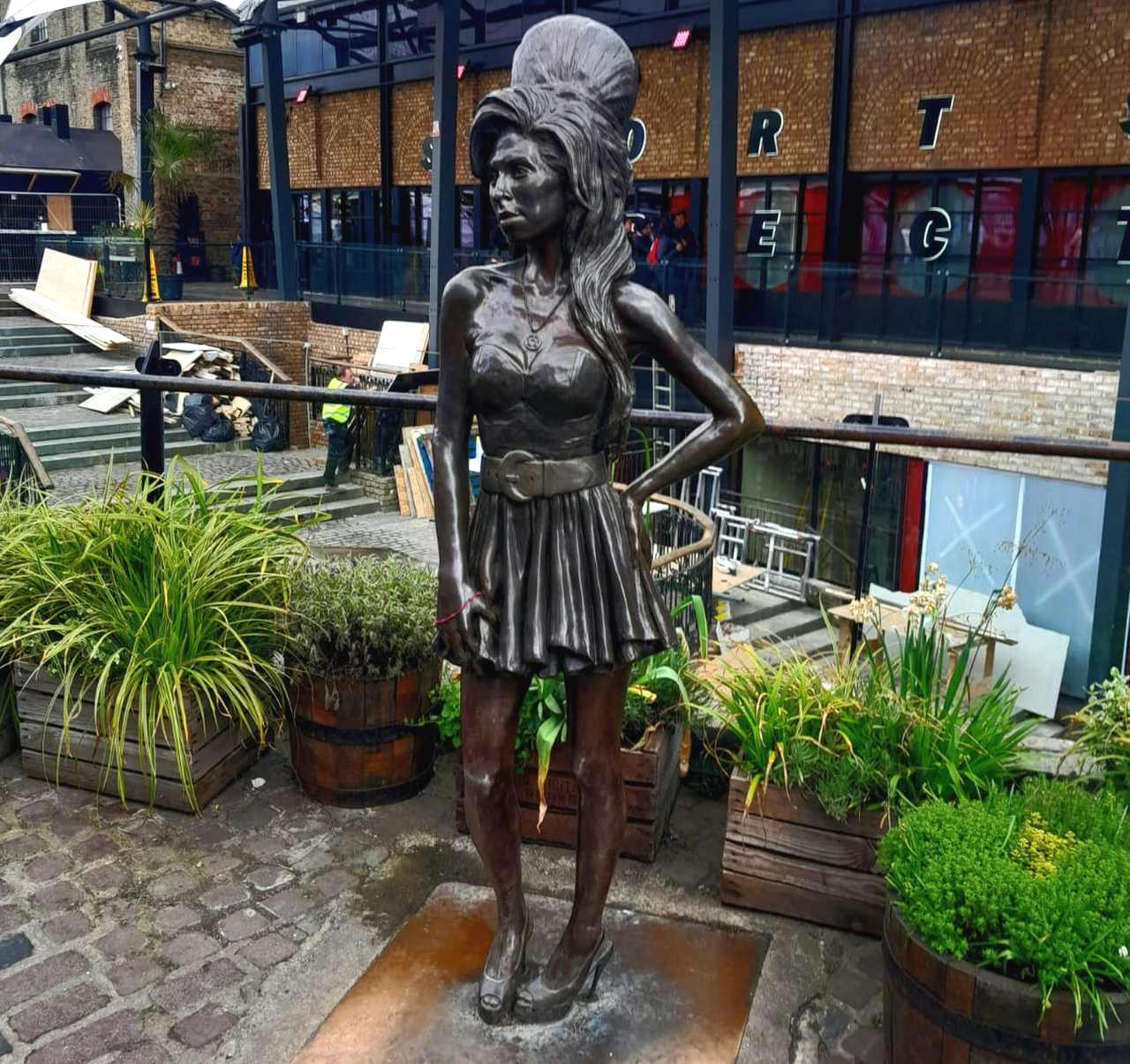 Camden became a home of musicians and celebrities attracting the rich and talented to its dock. One who became a staple of the landscape was Amy Winehouse.

Amy Winehouse was a British singer known for her iconic beehive hairdo, deep contralto vocals and hits such as ‘Back to Black’ and ‘Rehab’. She lived in Camden and served as an inspiration to many young musicians who were trying to find their own unique voices.

A bronze statue of Amy was erected in Camden following the singer’s tragic death in 2014 and now it stands in the middle of the Camden Stables.

The stables are probably one of the most memorable parts of visiting Camden. Back in 1925, it housed roughly 400 horses, and at its peak, an estimated 700 to 800 horses worked at the Camden Goods Depot. The very last shunting horse was withdrawn from duty in 1967 and the depot was closed in 1980. Fast forward to 2022 and now the stables have been converted into a mixture of food stalls, antique shops, art displays and everything vintage. I won’t ruin it for you, but check out Cyber Dog when you visit. 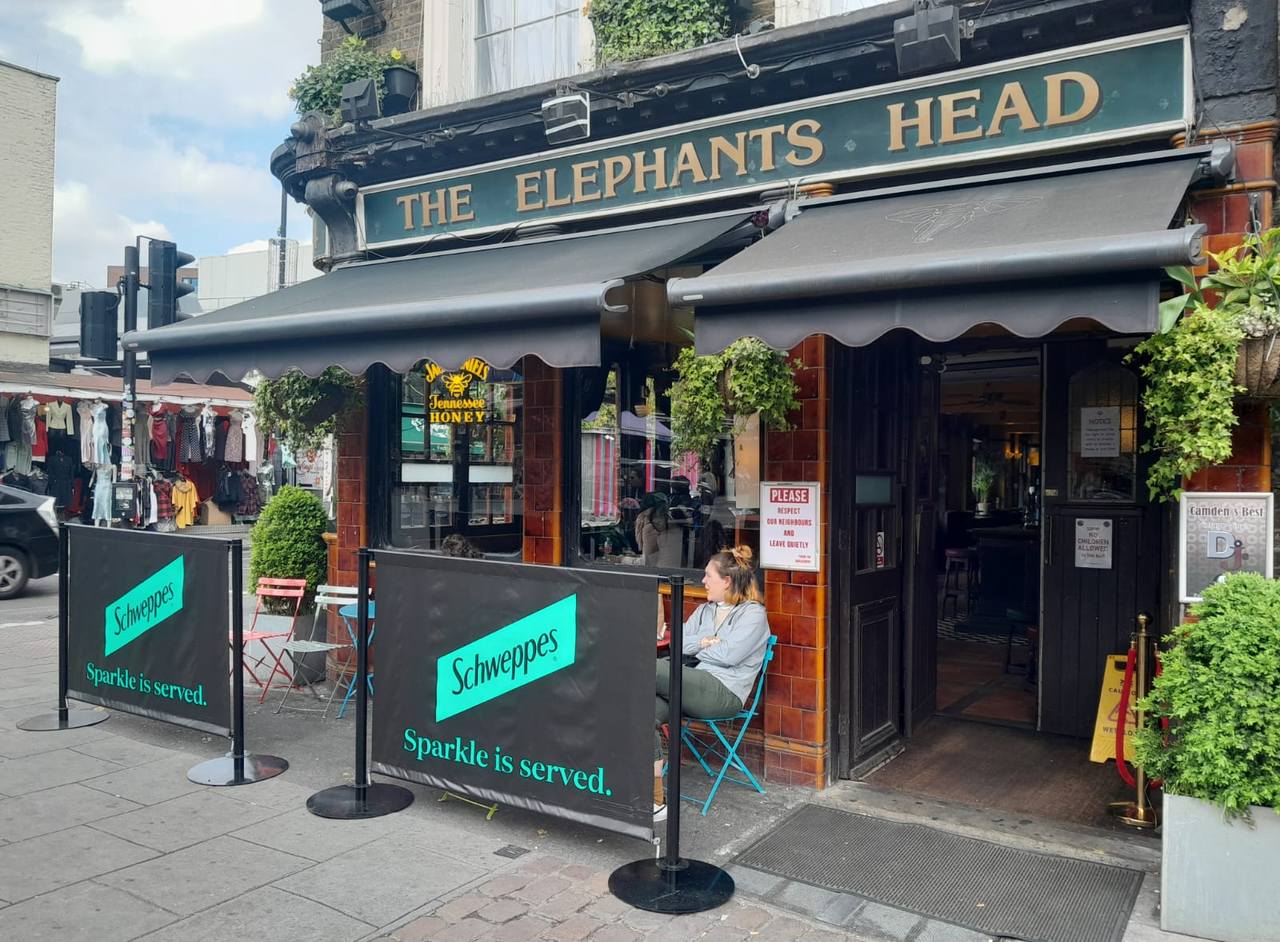 Now, being a pub girl, through and through, it never takes me long to find a bar stool, and a particular favourite of mine is located in The Elephants Head.

Camden is known for its love of old school blues, jazz, soul, and rock. The likes of Amy Winehouse, David Bowie and Zeplin line the fabric of my ears as I enjoy a cool pint of Camden Hells, which is a home-brewed lager.

By the way. England is known for its slightly ambitious drinking culture and Camden does not disappoint when it comes to cocktails. Camden is more pubby than clubby and most of the pubs are open way past my bedtime, so there’s plenty of time to have fun amongst friends.

Camden's nightlife is booming, there’s always an open mic night somewhere if you fancy yourself a sing-song. I myself, am particularly partial to visiting the Camden Head which is part of the Angel Comedy Club.

They arrange stand-ups there every single night and occasionally you might see a couple of famous faces as many comedians go there to test out material. That being said, I do remember one painful evening whereby I saw not one, not two, but three comedians who completely bombed on stage whilst trying out their new stuff. The last comedian was so drunk she spent most of the time laughing at her own jokes before she’d even said them. Bless them. I still had a great evening anyway.

Camden is a busy place and a fantastic way to meet other creatives. I have several friends who have formed bands just from bar hopping.

Whilst Camden can seem overrun by tourists, there are quiet times. I remember this being something that shocked me about London in general when I first moved here. It actually can be quiet. You’re always fed this narrative that the city never sleeps and the place is always heaving, but that’s actually not true.

For some of us, this is home. There is definitely a sense of community in Camden, and I am very happy to consider myself a part of it.