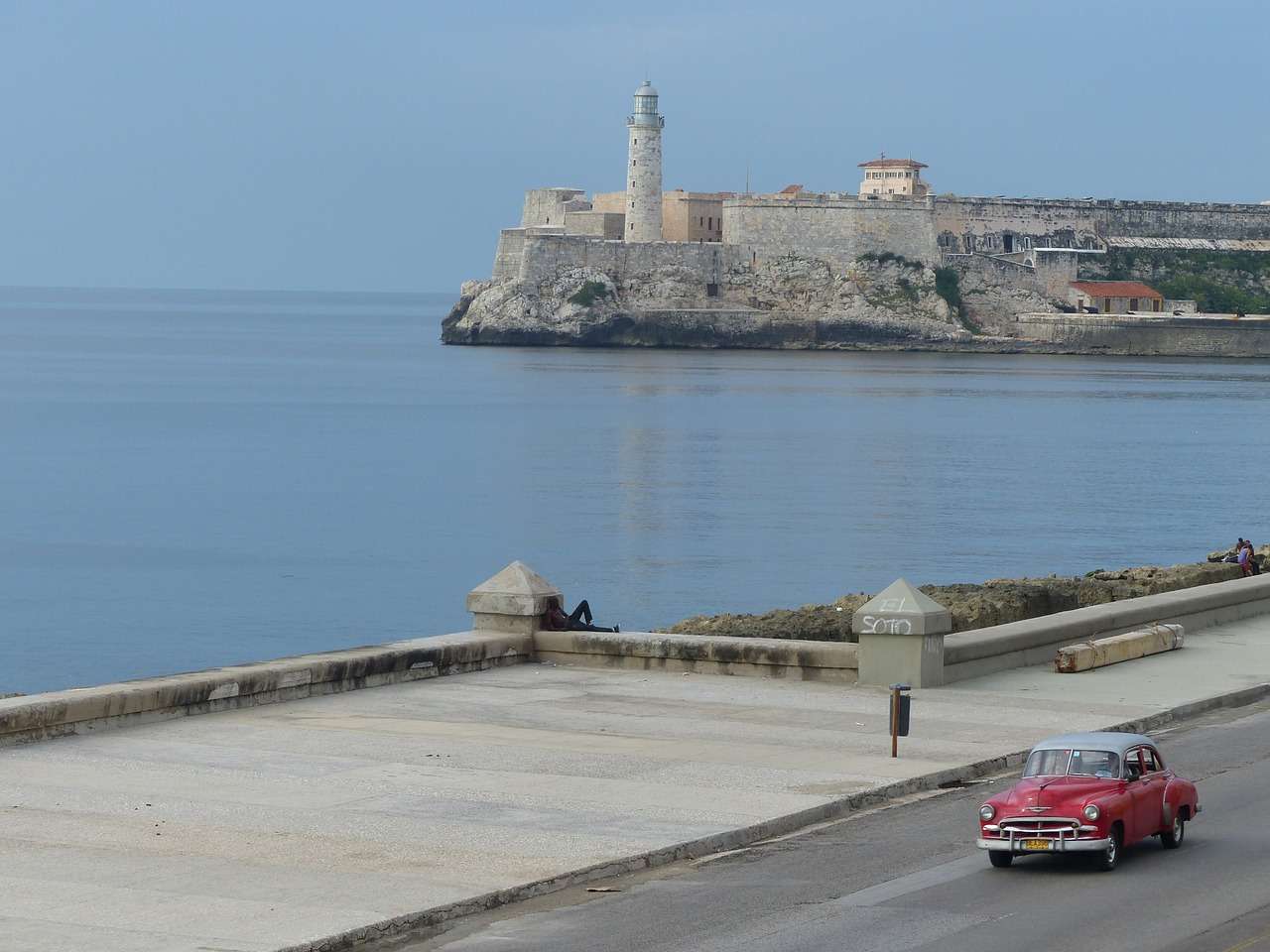 “We were returning to the morning light” – as a famous hit song by The Herd goes, which indeed we were, as our motley crew and team leader cycled off in bright morning sunlight on a 16-day tour through the extreme contrasts of this fascinating and contradictory totalitarian state-run country that is like no other … Cuba!

The official Cuban Tourist Map describes it as having “beaches of incomparable beauty, a fascinating seabed, wide variety of scenery, cities with estimable architecture” and I might add the most potholed of roads. I do not mean to be unkind, but it has to be mentioned since my trip was cycling tour on 21 gear hybrid cycles with panniers along with an experienced tour leader, assisted by official Cuban state tour guides. Our start and finish destination was the capital Havana.

Cuba is said to look like a crocodile on the map, or a great fish swimming in the Caribbean’s blue waters. Whatever its shape, Cuba possesses a rich culture and is by far the largest of all the Caribbean Islands. The land is made up of lush mountains, rolling hills and flat plains, all covered with a fertile soil from which springs sugar, tobacco and a vast array of tropical fruits and vegetables. Cuba’s mountains, swamps and offshore keys, conceal a wealth of plant and wildlife, barely seen by natives let alone tourists.

The island’s natural riches are equalled by the charms of its people. Cubans are a mulatto race from the early days of the colony, Spanish blood mixed with Indians and black slaves, bought over from Europe and latterly French from the 20th century. All these influences created something akin to a bottle of aged rum – dusky flavour, full and intoxicating! 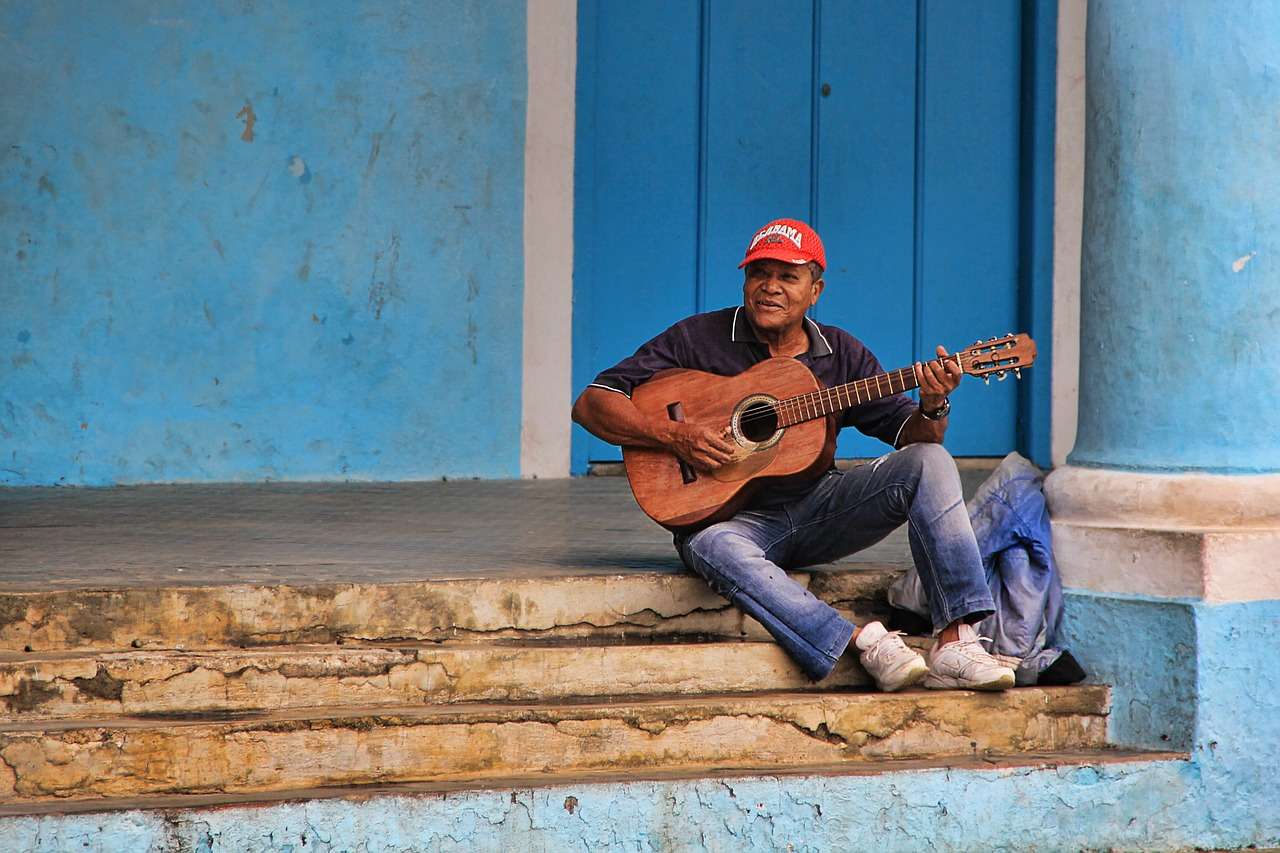 Much evocative prose has been written about Havana. Words do not really do it justice with its diverse architecture, wide avenues and the famous ‘Malecon’ promenade, particularly those at the city centre of Old Havana. Its magnificent decaying edifices of the colonial buildings were declared a UNESCO World Heritage Site in 1982. Watch with a touch of nostalgia as 40’s & 50’s American cars drive by. Cubans live and breathe music and appear to know only one volume setting…….LOUD! from distorted blown speakers and a musical style all of it’s own.

Everything seems caught in a time warp of the decadent American influence of the 1950’s. As night falls the city sparkles with life and a visit to the bars that Hemmingway used to frequent – La Bodequita del Media or the Floridity – to sample his famous drink a daiquiri is a treat.

Many visitors feel the Viñales Valley is the most spectacular sight in Cuba. Certainly it was eventful getting there, as we were blessed with monsoon rains whilst traversing the banana and coffee plantations.

The valley is set in the Pinar del Rio province, Cuba’s westernmost region, a fringe of land with the Gulf of Mexico to the north and the Caribbean to the South. The mighty Mojotes limestone outcrops provide the backdrop for the world’s finest tobacco fields, with spectacular scenes more akin to South East Asia than the Caribbean. Its’ easy somnolent pace of life provided a real tonic to the hustle of Havana. To get there we had to cycle along Cuba’s only main motorway. With little traffic, it provided a surreal experience as we idled along this vacant tarmac ribbon. This has to be the last motorway in the world where such an experience could occur. 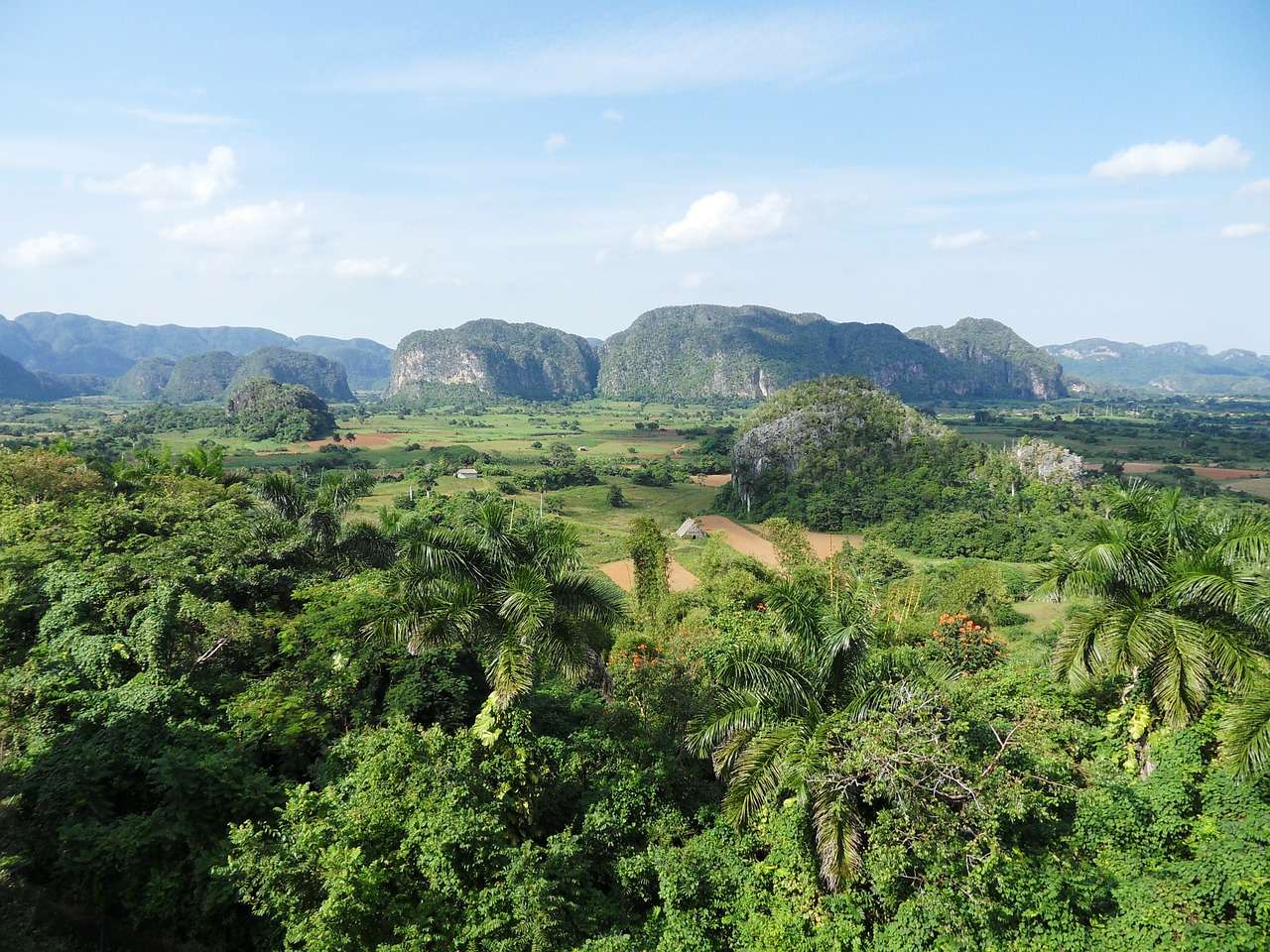 Equally impressive is the infamous Bay of Pigs, an otherwise innocuous sandy shoreline. This is now forever recorded in historic folklore as the failed invasion debacle on 17 April 1961. Suffice to say the insitu museum celebrates repelling the 1297 CIA trained insurgents (US participation was denied at every stage), which led to a great boost in Fidel Castro’s domestic and international status. Soon after he declared Cuba a socialist one party state. A walk round the museum with the entire captured US remnant on display, is a seminal moment. It really hits home just what this unique country is all about.

We cycled on to the town of Cienfuegos, a port city 155 miles southeast of Havana. Tourism has yet to reach this town with any force and allows one to see life as it really is for Cuba laid bare. Despite the industry on its periphery, the centre is quite attractive, with pastel coloured neo-classical buildings. Travellers are now starting to use this as a stop-off point on the way to Trinidad. The focal point of the town is Parque Jose Marti, one of the grandest squares in the country. Here you will find the monumental red-domed government offices, and early 19th century cathedral with a startling gold-painted interior and a music hall (casa dela troua) with whimsical flourishes.

The huge Hotel Jagua was our base for two nights. Set on a peninsular into the bay (originally a Hilton Hotel, seized by Castro after the successful 1959 Revolution, as it had just completed construction), it served up a sumptuous colourful evening cabaret for the mighty price of 5 Cuban dollars. Cavorting mulatto dancers in sparkling G-strings and pairs of strategically placed stars, may not be most peoples’ image of socialist doctrine – but this is Caribbean communism.

The Palacio de Valle just next door to the hotel provided a very unusual dinner date. Built between 1913 – 1917, this is the most peculiar ‘neo-mudejar’ style in Cuba, an architecture using elements of pre-15th century Moorish Spain. Its’ rooftop terrace is a great place to sit in the evening and enjoy a Mojito, as the flame coloured evening sky provided a wonderful canvas for the setting sun.

Trinidad is totally beguiling, which assaults all your senses. Sugar barons, slaves and pirates have all left traces in this oldest of Colonial Caribbean towns dating back to the 1514. Today it is a world heritage site, due to its time-warp preservation of architectural jewels. Aimless wandering through cobbled streets proved especially productive in Trinidad, since dozens of street names have changed and neither map nor residents seemed sure of what to call them. 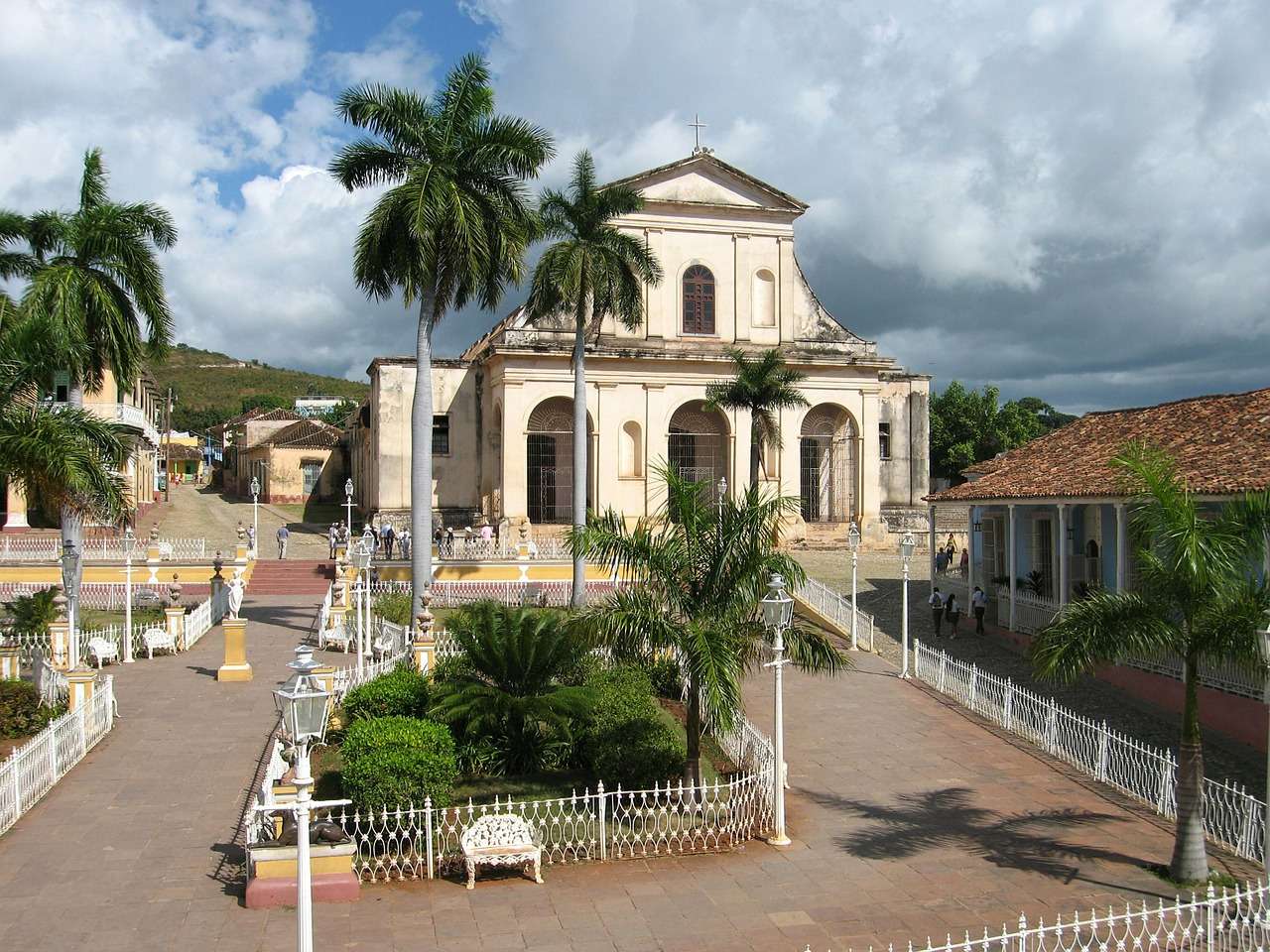 Next day, a visit to the San Luis and Sugarmill Valleys was particularly delightful. Highly recommended is the trip I took on a steam train once used in the sugar industry, which traverses the whole valley for tourists. It leaves daily from the Estacion Dragones station in the south of Trinidad. Leaving at 9.30 am and returning 2-3pm, it stopped off along the way at the old Manacas-Iznagas Tower, the iconic symbol of Trinidad’s rich history. This ‘frozen in time’ area transports you back to bygone days in the most colourful way. As I closed my eyes the whole sense of occasion and atmosphere washed over me.

Later that evening as night fell across the Plaza Mayor in the centre of town; it served up a special atmosphere of criss-cross rhythms of Cuban music to the twirling bodies of the multi-national gathering of tourists. As the live music punctuated the air, a luminescent moon bathed the whole event in that special ‘moon glow’, truly a magical occasion leaving yet another indelible image, which will long remain with me.

Another day another ride commencing on the highest section of the Sierra del Escambray (Escambray Mountains), arguably Cuba’s most beautiful range. From the village of Tapes de Collantes (built in the 1950’s), we experienced a dramatic downhill through this unique jungle of luxuriant vegetation, an area of waterfalls, river rapids and fantastic horizons. Blessed with its own microclimate, the mountains were a wonderful cool refuge from the baking Trinidad.

Over night was in Santa Clara, a town as iconic as any in this country. It was here Che Guevara had the most decisive battle of the revolution. This in turn led to the fall of Havana and the flight of Batista a few days later. Next day a visit to Che’s Mausoleum and Monument, proved particularly evocative and enthralling. In a massive and overbearing communist style, this solid concrete edifice celebrates the history of the successful Revolution, via statues, carvings and records. Inside the mausoleum burns an eternal flame guarding over the final resting place of Che Guevara and his fallen colleagues.

Mantanzas was the start of our final ‘open road’ day of riding through the Yuma Valley, surprisingly still relatively unknown to most western visitors. The town has redeeming features, worlds apart from the likes of Havana and Trinidad. Their poorly stocked shops, dusky back streets and primitive transport provide a convenient insight to the grimy real world of everyday Cuban life.

So the journey ends in Havana with time to reflect. Cuba is all of the ‘Shadows and Darkness’ of state monopolistic control. Try as it might though nothing can stop the ‘Morning Light’ bringing with it the irrepressible will and energetic drive of its people. My mind went back to dusk in the most run-down part of Cienfuegus. As I sat up high on a dumping ground overlooking the Barrios, everywhere I looked was a scene of abject poverty. Almost in defiance, childrens’ laughter rose from the maze of ramshackle streets as they danced and played. From every doorway the sound of music, dogs barking and lively chatter erupted in its own special orchestra of life. This is their microcosm, the very lungs and heartbeat of Cuba. Everywhere you see an industrious attitude, which turns ‘water into wine’; nothing is wasted but re-cycled time and again.

Cuba is special and gets to the very core of your being, leaving you with as many questions as answers. Certainly you never leave it, as the memories stay with you forever. Everybody should experience this unique country at least once before the inevitable change happens, with the possible passing of Fidel Castro in the near future (Fidel Castro is now 79 years old with no know successor), for we will never see its like again. With the unstinting help of Explore, cycling this fabulous country, proved the best way to see and feel it.  Certainly I left with an overriding burning question: “Just what could this resourceful nation achieve, if ever it freed from its shackles of isolation”? A very proud nation is lying in wait and you feel the starters’ gun is cocked ready.

20 Things You Didn’t Know About Colorado

How To Avoid Food Poisoning Abroad