Enchanted Princess entered the world during lockdown but it was the beginning of 2022 before the magic began in the Caribbean. In June she began her first full season, bewitching guests with sailings from Southampton. 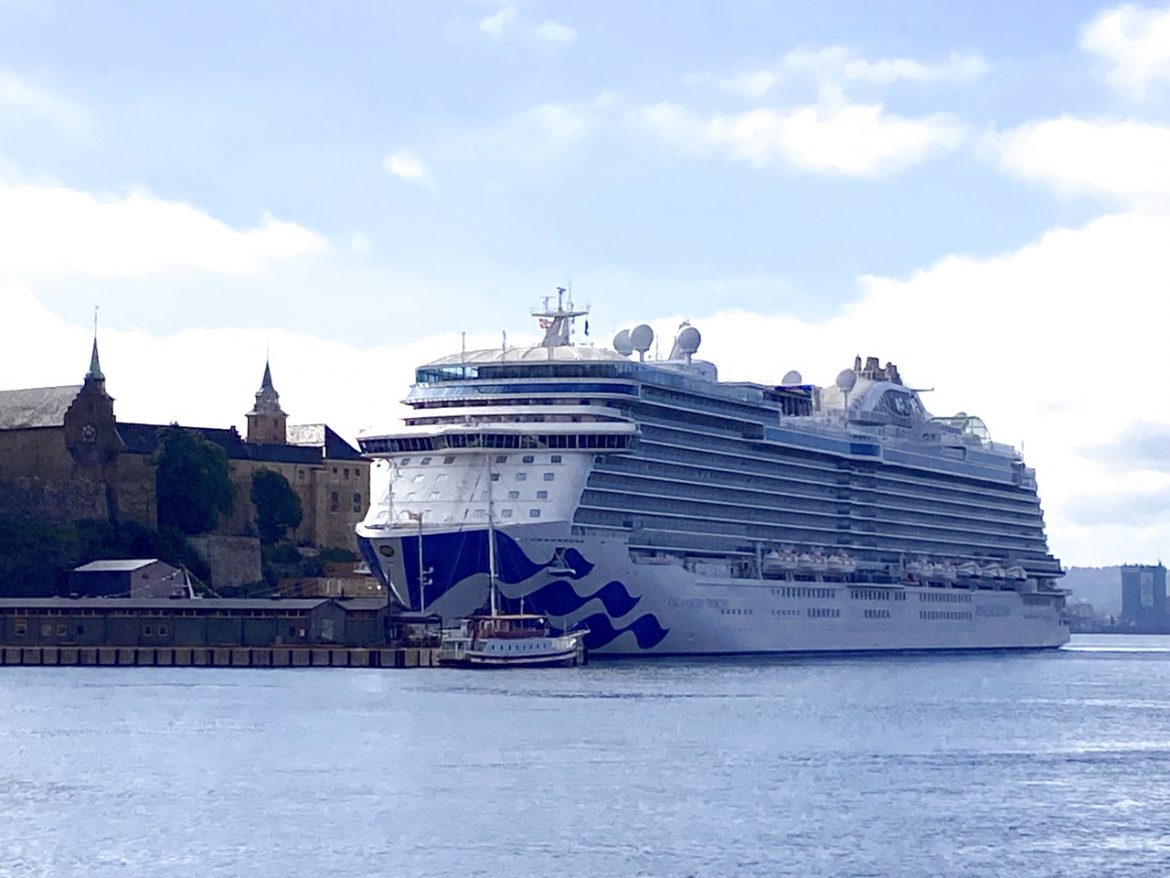 The latest ship from Princess Cruises and one that continues the feel of the fleet of cool, modern vessels. Enchanted Princess carries 3,660 guests in unfussy, sophisticated style – pale colours, soft wood shades and relaxing white.

No gimmicks, just everything is done well, from food – in both the main restaurants and the speciality dining – to entertainment, from extravagant shows to comedic quizzes and game shows. 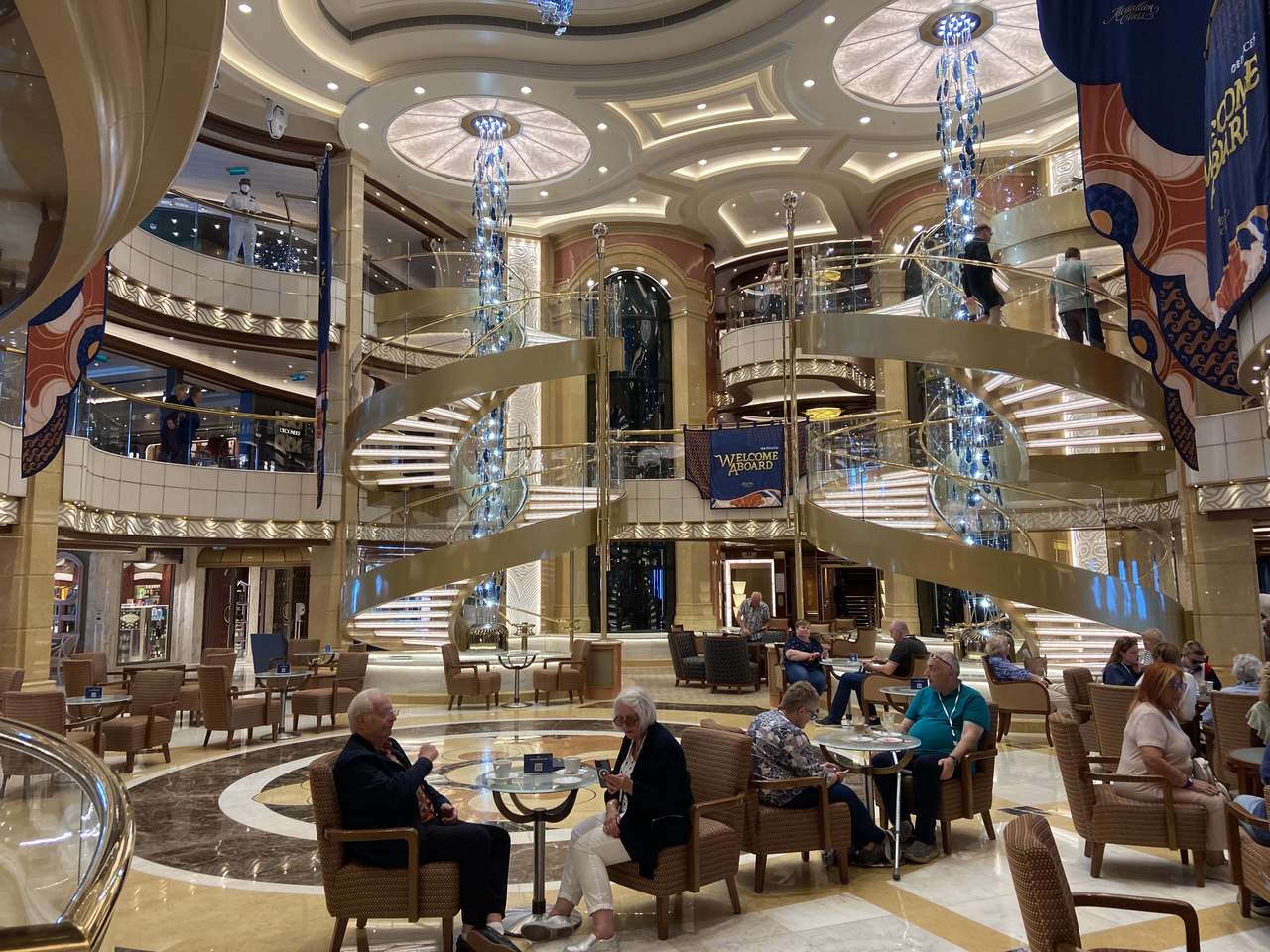 Princess is a transatlantic company with a big British element. There’s an international feel yet the bacon in the buffet is resolutely labelled English – thick and juicy rather than the crispy variety favoured by Americans.

This ship is a goodly size yet can still get where it needs to be; on our Scandinavian cruise we docked alongside Oslo’s Akershus Fortress and in Denmark’s Skagen (pronounced Skeyne) we were up close to the little fishing boats and able to cycle to the sandy point where the Baltic meets the North Sea.  There, and in Kristiansand, older guests were able to disembark for a quiet stroll while the younger ones went for a good hike. There were mostly Brits on my cruise although a number of Americans and Asians had flown in especially. 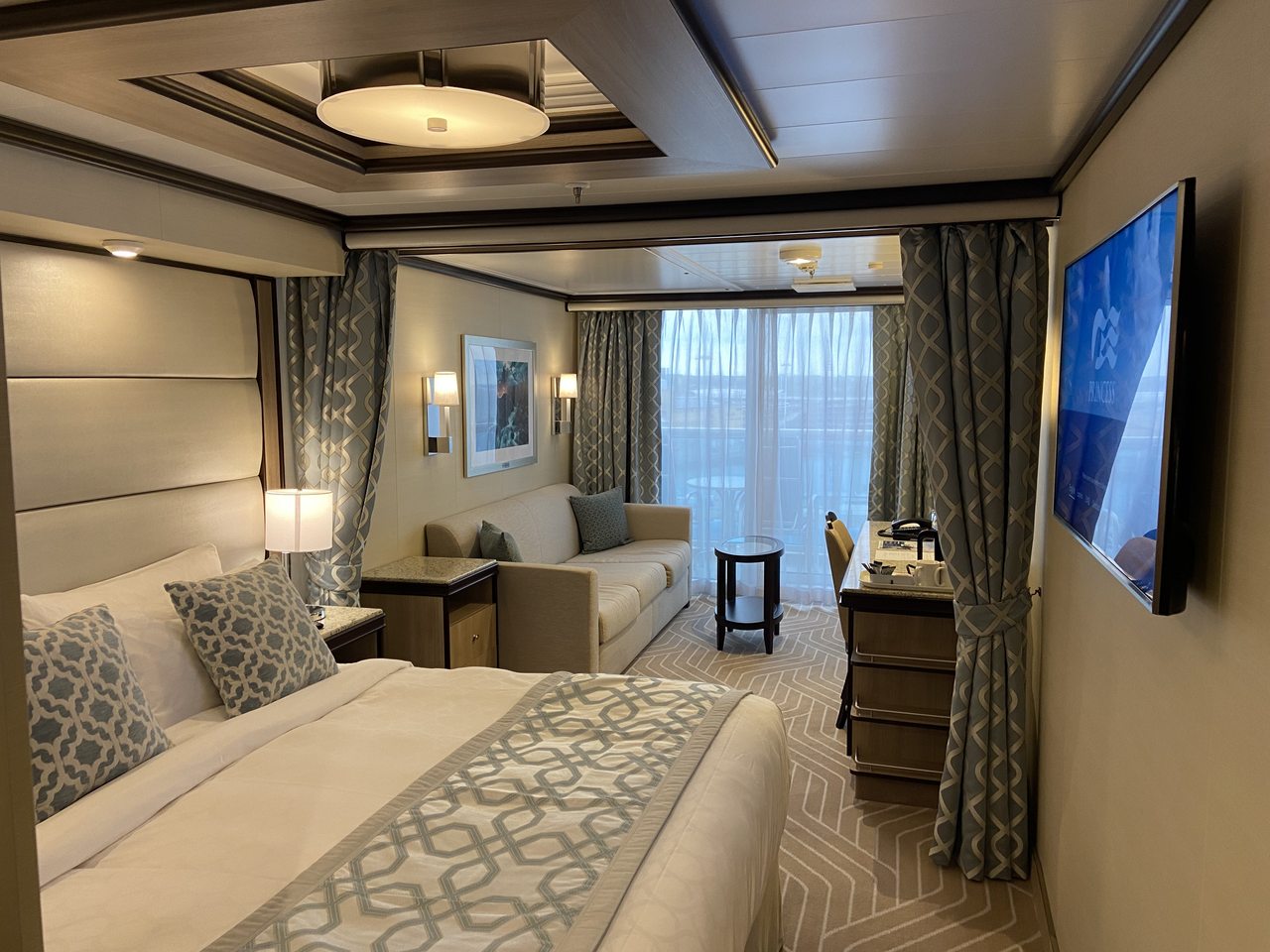 Our Mini-Suite was long and simple, the same width all the way to the glass wall opening onto a balcony with a table and comfy chairs. There was a kingsize bed facing a TV, and another TV opposite the sofa. There’s BBC and Sky news plus a library of TV series and movies – and you can book dinner reservations, excursions and spa treatments. The bathroom was simple with a bath featuring a shower, and there was a tucked-away clothes cupboard and hanging area.

Accommodation includes inside cabins, rooms with windows, balcony rooms, seriously comfy suites with a free mini bar – and the new, lofty pair of Sky Suites, like apartments you could live in, sleeping five with a long balcony and 270-degree panorama.

Capri is also open for breakfast but most folk head for World Fresh Market, the buffet that runs from the pool deck to the back, where open-air tables join forces with the Wakeview deck bar and infinity pool. Breakfast here includes everything from Marmite to smoked mackerel, pistachios to porridge, plus fry-ups a-plenty. Lunch runs from 11.30 through a modest late-afternoon selection, plus cakes, slipping seamlessly into dinner. Curries, stir-fries, chicken dishes, hand-carved joints, salads and much more.

On deck, Slice (pizza) and Salty Dog Grill (burgers) are free, open 11am-8pm. Inside, dining options are clustered around the three-floor Piazza atrium. Gigi’s is a free 11am-10pm sit-down pizzeria while the Salty Dog Gastropub (burgers, craft beer) is a chargeable restaurant ($18 for two dishes) as is Bistro Sur La Mer (seafood; $29 per visit); all three, however, are open to the hubbub of the walkways so don’t always offer a relaxed experience.

The best of the extra-cost restaurants is Crown Grill, a low-lit, polished wood steakhouse ($29 per visit) where the splendid New York strip is dwarfed by the 22oz porterhouse.

The other favourite ($25) is Sabatini’s, an Italian where pasta comes as an interim course before dishes such as the baked seafood parcel.

The International Café is actually a coffee bar; there’s a caffeine charge but sandwiches, pies and sweet treats are free and it’s open 24/7.

There are bars wherever you turn, whether the Crown Grill bar outside the steakhouse, Crooners, on the Piazza, cosy with black and white Las Vegas photos, a grand piano and relaxing music, the colonial ambience of Good Spirits or Take 5 where a suitably black-clad jazz trio plays.

The main pool is actually two pools with a raised hot tub area between them. The area, busy with sun loungers, gives way to comfy chairs. There’s the glass-floored walkway that bows out from the side, and views straight down to the sea from deck 16.

A second pool, less noticed, sits by the Retreat bar farther forward. Upstairs is the Sanctuary, an adults-only place to chill, whether in one of the eight private cabanas ($140 for a half-day) or on a lounger ($20).

The sun loungers aren’t just for working up a tan, they’re for Movies Under The Stars, a long-time Princess favourite – a big screen showing major movies each evening plus late afternoon music concerts

A sizeable gym, open to all, has glass walls for hypnotic views. There’s also a walking track, a basketball court and little putting green.

The Lotus Spa is a warren of treatment rooms; my hot stone massage was a treat, a serious massage rather than a light rub down. At the heart of the spa is the Enclave, a thermal suite featuring a hydrotherapy pool with rain shower and air jets, heated stone beds, a steam room, a herbal steam chamber and a sauna. Day pass: $49.

Some of the best at sea. The new 5-Skies stage show, a technologically-advanced musical take on a virtual reality game, combines lavish sets with extraordinary electronic light effects, while Rock Opera unites two very different musical styles in a powerful way – both filled the 800-seat theatre when I was there. My

week was also a Comedy Cruise with shows from impressionist Rory Bremner, Father Ted star Ardal O’Hanlon and Mock The Week’s Lucy Porter plus the Comedy Store Players. Yet there was more with off-the-wall ventriloquist Gareth Oliver and comedian Tom Binns.

Then the wild quizzes filling the Vista Lounge and Princess Live venues, largely thanks to cruise director Matt Barnard, an engaging Brit, fast, silly and energetic, bringing manic life to whatever he touched. The tireless Barnard also DJ-ed, danced and laughed through sailaway parties, introduced the stars and even held a post-show Q&A session with Bremner before changing venue for the riotous Liars Club Gameshow, ending well after midnight.

It’s all pretty special without being over the top. No gala dinners but there were two evenings on my cruise that were labelled Dress To Impress. Many did – with bowties and posh frocks even in the buffet – but you didn’t feel self-conscious if you declined.

What were special were those quizzes. Lucy Porter’s comedy-themed quiz was a hoot but the real winner was Matt Barnard’s Sat-Nav Sing-along. Here the audience had to identify pop songs from lyrics recited haltingly by Sam the sat-nav, a computerised voice that even managed to throw in a joke or two. Inspired madness.

Understated style from one of the world’s leading cruise companies, and very similar to other recent launches, Ski Princess and Discovery Princess.

Enchanted Princess is spending the summer sailing from Southampton before moving to the Caribbean for the winter. A seven-day cruise to Scandinavia from Southampton, featuring culinary stars including MasterChef’s John Torode, departing August 26, starts at £879pp. Princess.com

Your fare gets you cruise and food; other things are packaged.

Princess Plus (£40pp/day) includes 15 drinks per day plus posh coffees, wifi for one device per person (easily swappable between phone and laptop) and tips.

Everyone is now MedallionClass, which means using a 10p-sized hi-tech device. It doesn’t just open your cabin door, the door senses you coming, unlocks, flashes your photo on a mini screen and welcomes you in. In bars, staff see you ping up on their devices and there’s no delay to pay.