Deep within the alluring landscape of Wales, there are countless swathes of lakes. We feature 12 of them. 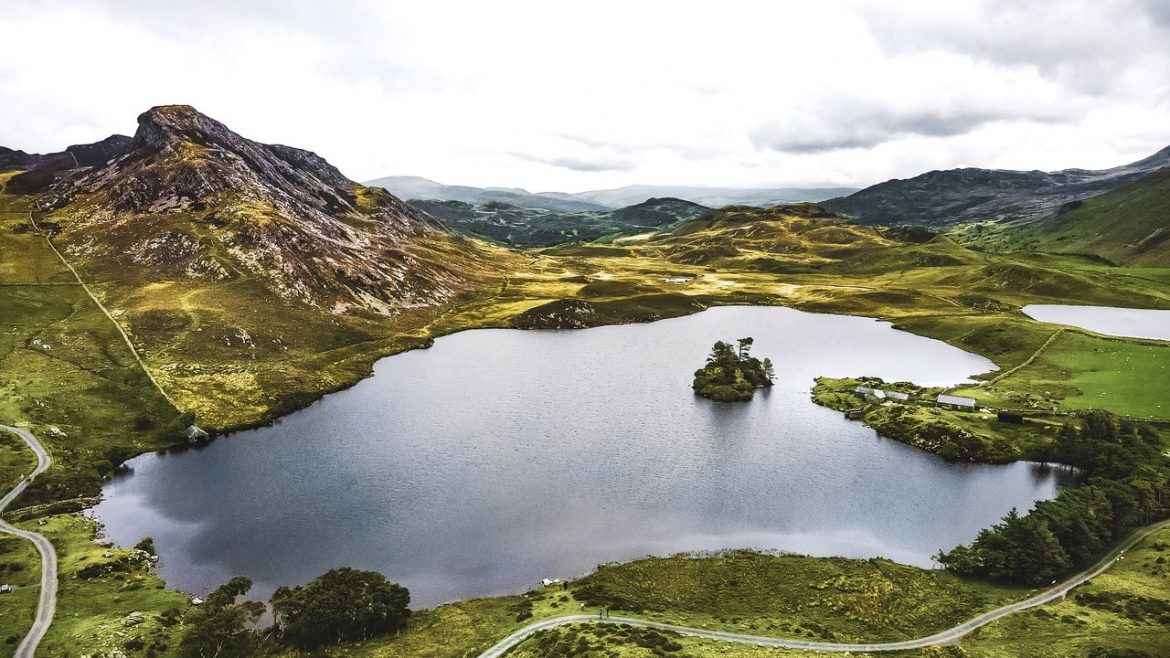 Wales is dotted with majestic mountains and blanketed with ancient woodlands. But what few travellers realise is that deep within these alluring sceneries, there are countless swathes of lakes. Some are shrouded in folklore and legends, while others embrace their remote location, offering an idyllic setting for hiking, meditation, or the more daring adventure of wild swimming.

We have included 12 of the best:

The National Botanic Garden of Wales

Following a five-year, £7-million restoration project, the National Botanic Garden of Wales has restored several Regency lakes. Originally created by William Paxton in the 18th and 19th Centuries to supply water to his Middleton Estate, these lakes are a pristine example of a Regency landscaped garden.

Encircled by a lovely footpath, one moment visitors will view a tranquil and motionless lake, and the next the air will be buzzing with water tumbling over cascades, a waterfall, and a weir. 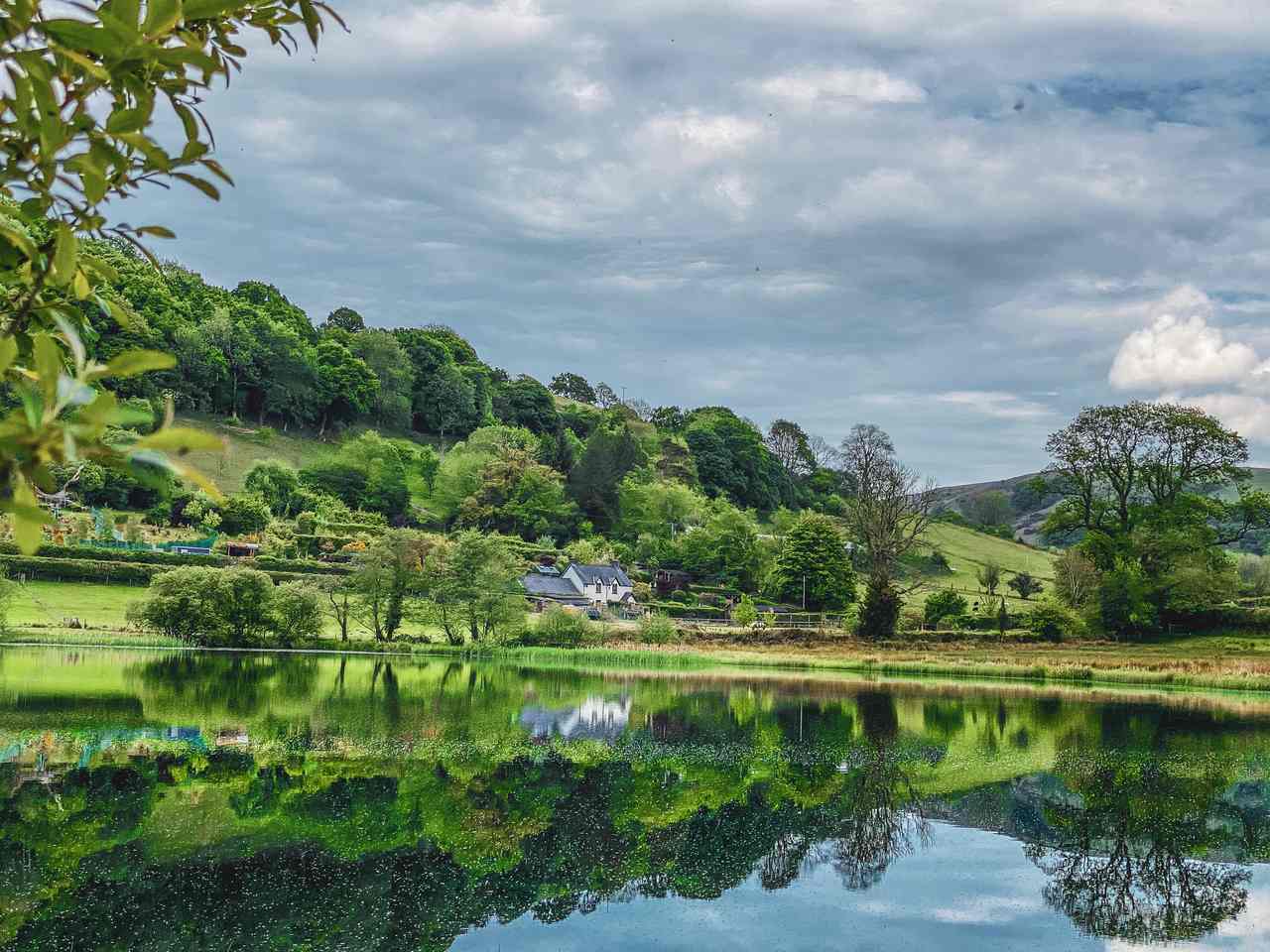 Talley Abbey is the only religious building belonging to the Premonstratensian order in Wales. Beyond its skeletal remains are Talley’s twin lakes separated by a slender neck of land. These formed during the last ice age.

It’s not surprising that the abbey was named Talley (Talyllychau), translating to head of the lakes. The lower lake spans 27 acres, surrounded by alder and willow carr and reed swamp. Its remote location means there are ducks, swans, and grebes. The upper lake is around 16 acres, and in the summer, you’ll discover the yellow-and-white water lily floating on its surface.

Around 17 miles from Llyn y Fan Fach is Dinefwr Park, which shares the Lady of the Lake’s story as the estate’s white cattle are believed to be from the same herd she raised. The lake here is located within the ancient deer park, and is known as the Lake of Reflections, as it supposedly makes you look wealthier than you are.

The legend states that a farmer used the lake to reflect himself and his ten cattle to make it seem he had twenty cows, thus winning a challenge to save his life. 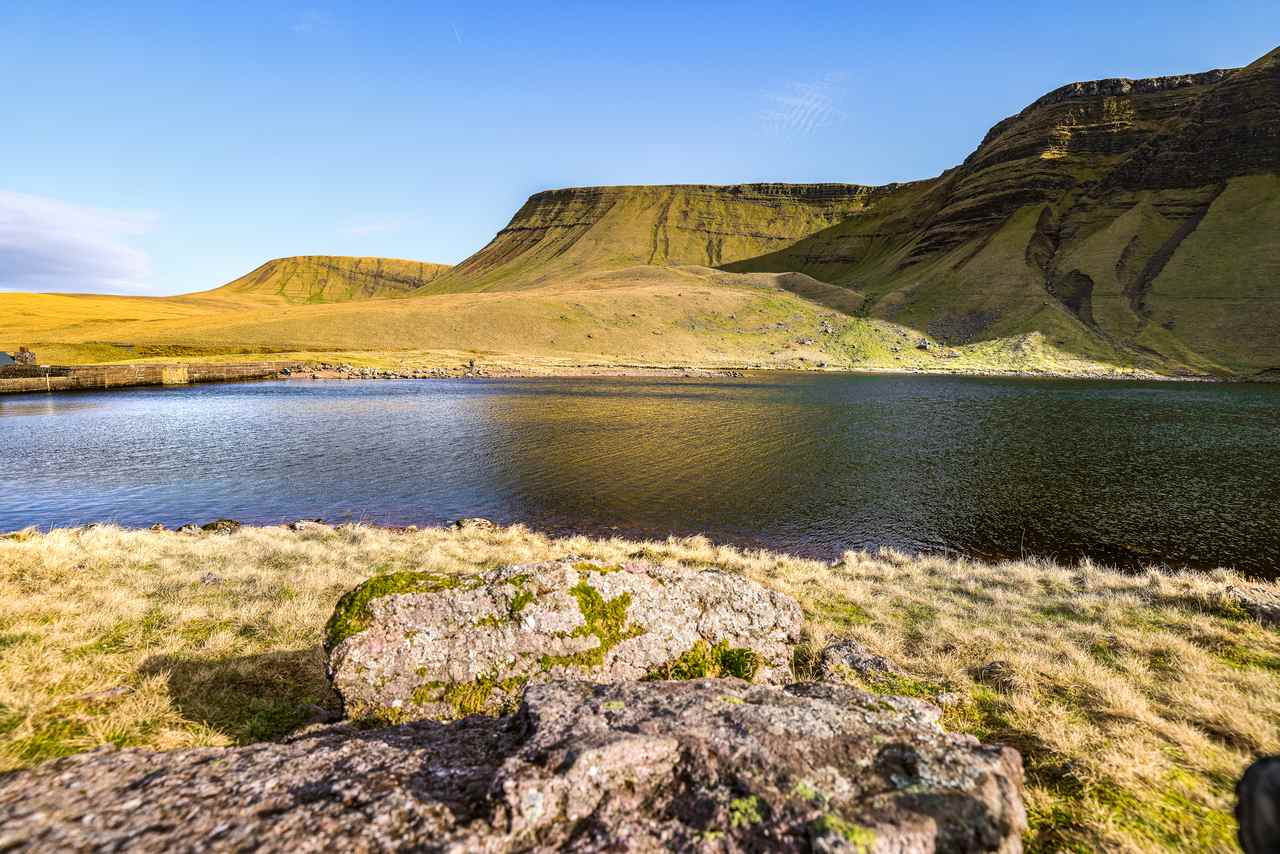 To reach Llyn y Fan Fach, is a gentle, four-mile hike to its summit. There you’ll come across a wild mountain ridge, known as Bannau Sir Gaer, bordering a glacial and mysterious lake. Shrouded in folklore, Llyn y Fan Fach is connected to the myth of The Lady of the Lake.

As the story goes, a young farmer in the 13th Century saw a beautiful woman emerge from the lake. He won her hand in marriage on the condition that if he hit her three times, she’d leave him. Unfortunately, the farmer did hit her, and she disappeared back into the lake, taking her magical farm animals and leaving behind her sons. These sons became known as the Physicians of Myddfai, who treated the English royal court.

The lake, a haven for wildlife, such as fish, red kites, carrion crows, buzzards, and kestrels. While there is a sign saying, ‘no wild swimming’, there have been times when travellers disregard this rule and have said it was well worth the risk! 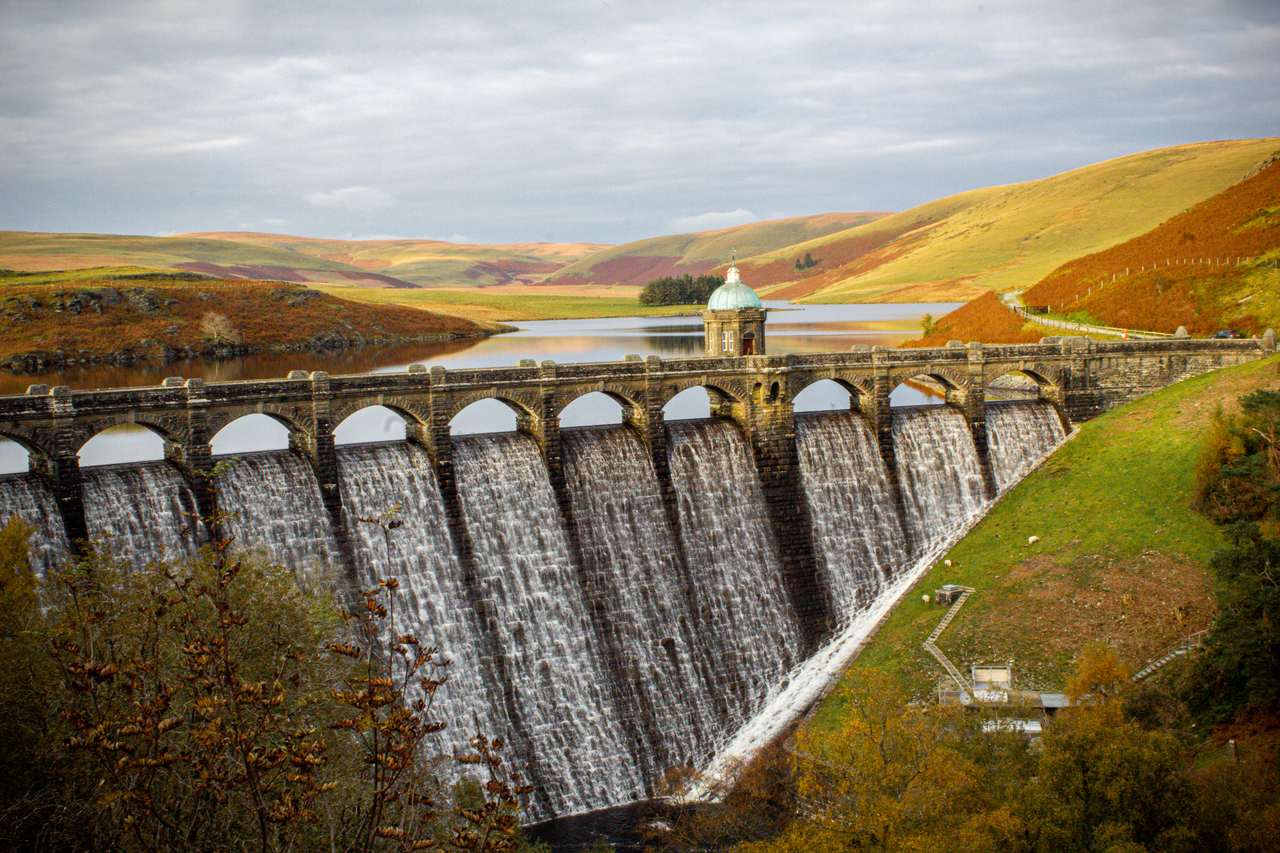 Almost all of the Elan Valley’s 180 square kilometres is covered by 12 sites of Special Scientific Interest. Within this land sit many dams that provide drinking water to Birmingham. The elegantly-curved Craig Coch is the highest of them, towering 1040 feet above sea level and boasting a sweeping lake behind its ‘Birmingham Baroque’ architecture.

Garreg Ddu and Pen y Garreg dams are also quite popular, surrounded by a colony of trees and undulating hills that make the landscape look like a cross between the Lake District and the Great Lake near Hogwarts.

Caban Coch is the lowest of the dams, which resembles a natural waterfall and has a serene lakeside walk through the bluebell woodlands.

Lastly, Claerwen is twice the size of the other dams, and its reservoir is almost the size of all the other lakes combined. There is a 6-mile-long track starting along the lake’s northern shore, taking travellers around the Claerwen National Nature Reserve. 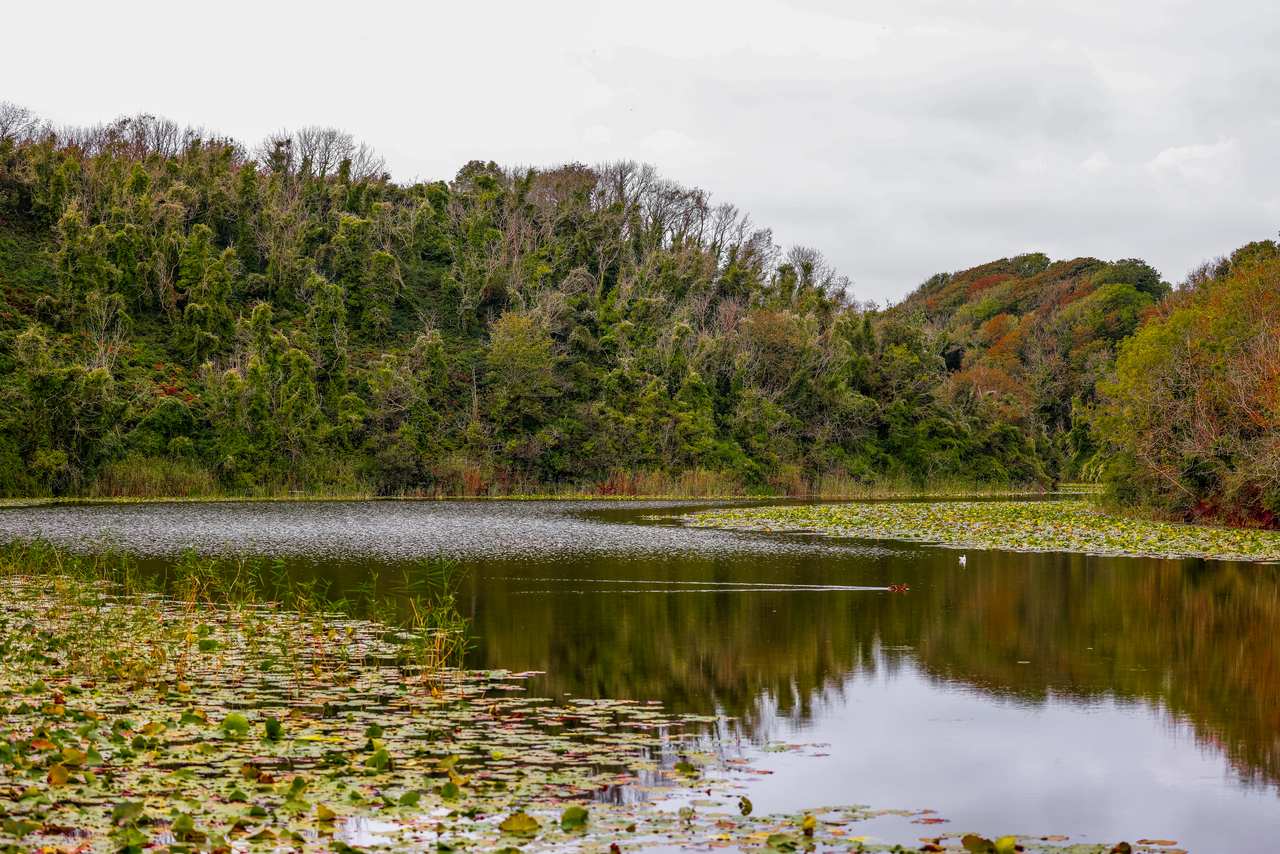 Bosherston Lily Ponds are situated in the Stackpole Estate, which is owned and managed by the National Trust. It’s believed King Arthur found his sword, Excalibur, here, and that this was his final stopping place before sailing to Avalon.

The ponds are rich in swans and pike, and in the summer months, the water lilies cover the lake’s surface. In autumn embark on the mile walk around the lakes to see oranges, yellows, and reds reflected in the waters, or look for the otters.

The lake has a rather morbid origin, as its name derives from the Welsh Crog-gangen, which means hanging branch. It’s assumed that criminals were hung from the branch of an oak tree nearby. Its position at Cadair Idris’ northern slopes, some 800 feet above sea level and overseeing the Mawddach Estuary, makes Llynnau Cregennan one of the most beautiful places in the Snowdonia National Park.

The land around the lake is owned by the National Trust, with countryfied features such as two small hill farms, sheep grazing, and fishers hoping to catch trout. It’s also a great place to come face-to-face with Wales’s prehistoric history, as there are Bronze Age hut circles and Neolithic standing stones in the area.

The Lake Vyrnwy in Powys was built in the 1880s to supply fresh water to Liverpool. The lake itself contains 12 billion gallons of water and stretches five miles long and half a mile wide.

With its moorland, woodland, and farmland, Lake Vyrnwy has been designated a Site of Special Scientific Interest. It hosts 40,000 brown trout, and has low pollution, making the lake one of the best places to stargaze in the UK. The 12-mile, flat route around the lake is excellent for cyclists. Photographers tend to marvel at the pointed tower, known as the Straining Tower, rising out from the depths of the lake. It looks akin to a fairy-tale castle, and its arched bridge certainly adds to this idea.

Situated east of Brecon, Llangorse Lake is the largest natural lake in Wales. It lies at 145 metres above sea level and was formed millions of years ago.

Llangorse is a Site of Special Scientific Interest and is a popular spot amongst fishers looking to catch pike, bream tench, perch, eels, and roach. From the Llangorse Common, you can hire a boat, stand-up paddleboard, windsurf, dinghy, or rowing boat. Nature enthusiasts will likewise adore this spot, as there is abundant wildlife to be found, including otters, water voles, swallows, Canada geese, warblers, swifts, and coots. One of the best ways to catch sight of these creatures is to follow the footpath around the western shore to the Llangasty Nature Reserve.

Beyond this, Llangorse Lake is known for its afanc (lake monster), named Gorsey, and for its crannog – the only one of its kind in Wales. The latter is an artificial island about 40 metres from the north shore and is over 1,000 years old.

Situated in the Brecon Beacons, Talybont Reservoir is the biggest stillwater reservoir in the area, spanning 318 acres. Construction on the dam started in 1931, and in 1939 it began supplying water to Newport.

There is a 9.5km route around the lake which is considered easy and takes almost three hours to walk. If you’re looking for somewhere to sit and gaze out across the water or are hoping to lose yourself in a tranquil forest setting, then this would be the walk for you.

At almost 990 feet above sea level and holding over 64 million cubic metres of water, Llyn Brianne Dam is South Wales’ largest body of water and the biggest dam of its kind in Europe. The lake lies hidden in the upper part of the Tywi Valley, between Carmarthenshire, Powys, and Ceredigion, and since this part of Wales is sparsely populated, you’ll be in the heart of the countryside.

It’s a great location to bike, hike, kayak, or drive along the single-track mountain lanes. The area’s isolated nature makes it excellent for bird spotting, and since it has been awarded a Dark Sky Discovery Site Status in 2019, it’s perfect for astrophotography.

Concealed in the valleys of Margam, Brombil Reservoir is a turquoise lake surrounded by a colony of evergreen trees and dense vegetation. Its entire appearance looks akin to the staggering landscape of Thailand, and its remoteness means very few – even locals – know about it.

The hike to the reservoir is through a forest following the Arnallt River, featuring stepping stones. The route takes you either to the banks of the reservoir, where you can wild swim or trek up the mountains. The latter is much steeper, but it does offer the best viewpoint of the lake and the steelworks at Newport.

It’s Port Talbot not Newport steelworks but that aside mega place.