Home Travel ReviewsCruise Reviews Should you catch a ferry or fly drive between Spain and the UK?
Cruise ReviewsTravel Articles 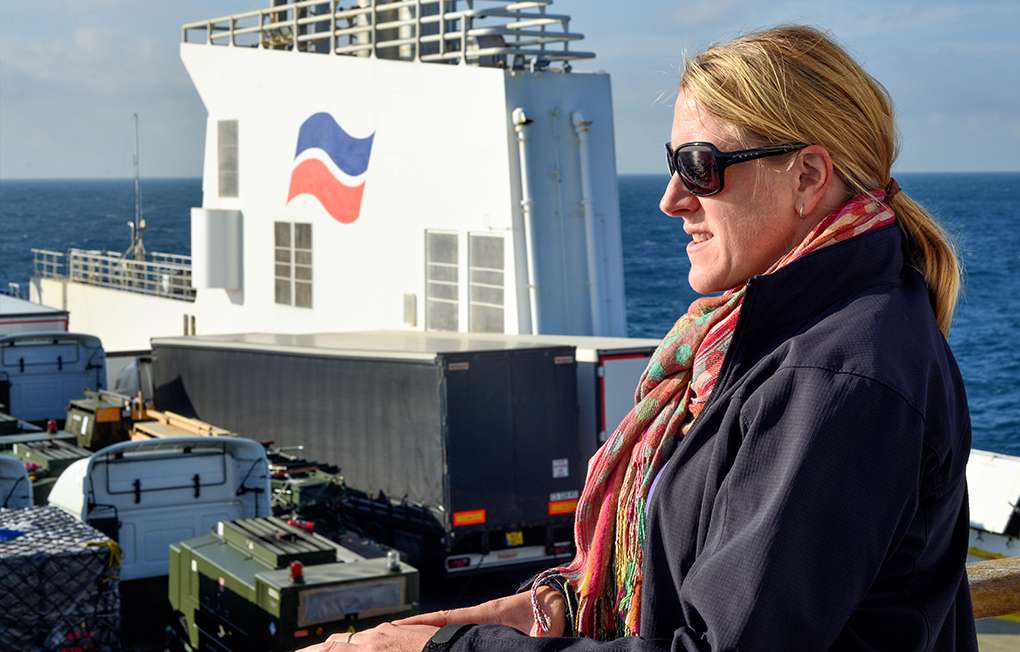 This autumn, passengers travelling between Spain and the UK could be forgiven for thinking that “budget” flights really are not so budget. For example, during November 2015, the normal crop of “cheap” term-time flights between the South of Spain and the North of England showed an unusual spike in prices, with some weighing in at an unpalatable €790 or more for a family of three – similar to July air fares.

So why did that occur? Martino Matijevic of global cheap flight search engine WhichBudget, says:

“In general, budget airlines will run a flight sale in September, when people get back from summer holidays to their grey, rainy homes and start dreaming of holidays again. Then prices shoot up in November, when people start planning Christmas holidays. With the exception of leisure flights between Christmas and New Year, prices will only continue to go up until January when airlines run their sales again to get rid of remaining out-of-season inventory.”

“There are many factors as to why our fares may fluctuate. Like all airlines and travel companies, Easyjet’s model is built on supply and demand. The airline has a demand-led pricing system which means that fares reflect what consumers are prepared to pay for our flights.

“We always recommend that all customers aim to book as early as possible to secure the lowest fares.”

However, this does not fully explain why the number of flights on the Malaga to North of England routes was reduced during November 2015, forcing up the prices for the existing flights. The prices were consequently sky high, even when searched in early October.

So, an obvious alternative would be to fly to Gatwick and then hire a car for onward travel. For a fortnight’s usage, a hire car collected and dropped off at the same location, and suitable for a family of three plus their luggage, generally costs from €200. Extras, include  “damage waiver” insurance to cover against a hefty excess fee if you prang the car. Child car seats cost from £4 per day to hire. Expect to pay a premium if the drop off point different to the collection point. Not such a cheap undertaking.

An alternative travel option would be a “no frills” ferry service between Bilbao and Portsmouth. The “Economie” service was introduced by Brittany Ferries back in May 2015 and would mean we could take our own car.

Could the newer service give the “fly drive” idea a run for its money? Would it be Ryanair on Sea? How would it compare to Brittany Ferries “cruise”, in terms of the lost perks, such as passenger entertainment and fewer public areas? Would it disappoint us after previous trips on the flagship vessel, the Pont Aven?

I knew that a land and sea journey in our own vehicle would have advantages, although this journey would also involve a substantial 3,300km drive on motorways. As well as creating flexibility with our trip itinerary, we could ship a vanload of British goods back to Spain, instead of being limited to 20kg per person carried by Easyjet or Jet2 in hold bags costing €30 each.

Aimed at budget-conscious travellers, the Brittany Ferries’ “Economie” service starts at €263 one way and is operated by the Baie de Seine, a 22.4 tonne vessel that carries 600 passengers, 160 cars and 84 trucks. According to Christopher Jones of Brittany Ferries, the Economie sailings are proving popular, especially with pet owners who want to transport their dogs between the UK and Spain.

From 2016, the Baie de Seine will operate almost exclusively from Portsmouth to Bilbao and Santander, with one return trip a week to each – so around 200 sailings a year. It takes over where a “no frills” service previously operated by LD Lines, now merged with DFDS, left off.

That service operated between St Nazaire, France and Gijon, Spain from 2012; and also between Poole and Gijon/Santander from November 2013 until September 2014, when it closed down.

Upon boarding the Baie de Seine at the Port of Santurtzi, Bilbao we discovered that Brittany Ferries’ idea of “no frills” is definitely not “Ryanair of the Sea”. Although the Baie de Seine is not as well-appointed as the company’s flagship vessel, the 2,400 passenger Pont Aven, it exceeded our expectations in terms of fittings and facilities.

While some budget ferries are liberally decked with brown melamine, the Baie de Seine has tasteful décor. The soft furnishings are sourced from European manufacturers and I was impressed by the comfy yellow duvet covers in our cabin.

We were accommodated in a standard 4-berth outside cabin costing €175. Inside 2-berth cabins start at €100. Passengers who want more room can opt for large Economie Plus cabins, costing €260, which feature a TV, sofa and table.

Some cabins on the top deck, open directly on to the Reading Lounge, where passengers sit quietly with books and tablet devices… this might not be ideal if you have screaming infants or hyperactive teens! 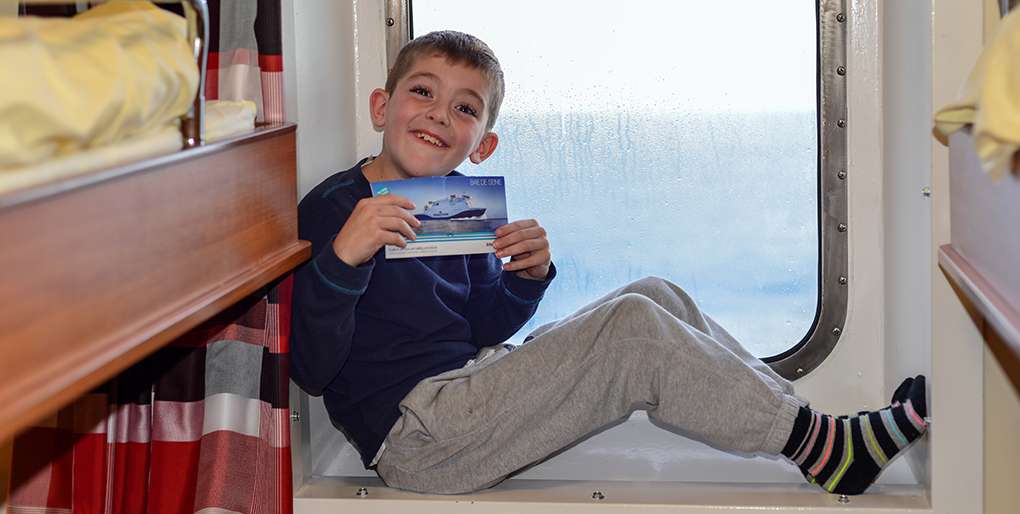 Passengers were a mixture of 50+ caravanners, a RAF Wittering ground crew being transported from exercises in Spain, lorry drivers and a few single travellers. As it was not a school holiday, we were the only family with children.

My boys loved the Baie de Seine’s restaurant, ‘Formulae’, which serves a choice of hot and cold dishes in ample portion sizes. The kids’ menu, costing €4 for breakfast and €5.20 for lunch and dinner, includes a “surprise box” containing toys and sweets.

Although Brittany Ferries’ Economie class is advertised as having “no family entertainment”, there are things to amuse youngsters on board the Baie de Seine. The ship features a kids’ games room and a video console area. On request at the information desk, PG certificate DVDs can be played in the games room and various board games are available to guests free of charge. We played ‘Snakes and Ladders’ on the Sun Deck and sniggered at a game named ‘Rock the Boat’. 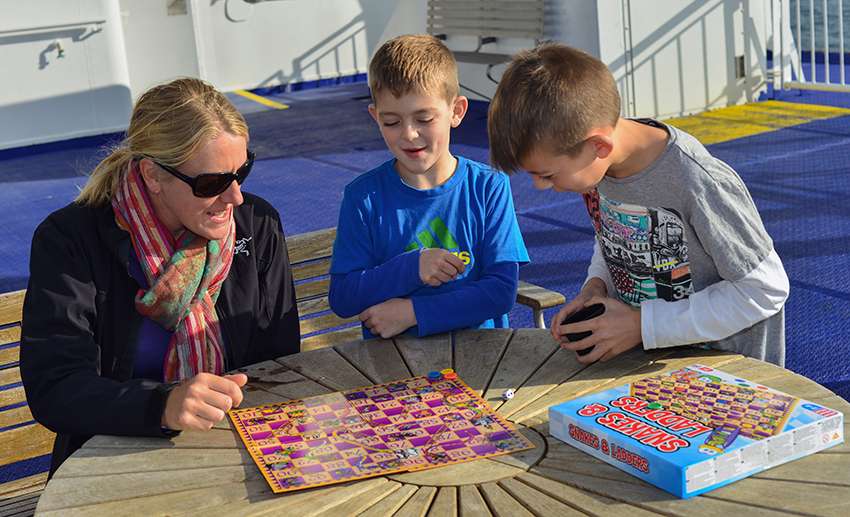 While strolling the decks, we met Lou, an English walking guide working in Galicia who makes regular trips to the UK. She prefers the Baie de Seine to the Pont Aven and its sister vessel, Cap Finistere, for cost reasons. A single budget traveller without children, she says:

“I don’t need a large cabin or family entertainment. Economie suits me fine.”

We also met Gary and Margaret from Portsmouth who travel regularly from Calpe, a town located between Alicante and Valencia, and the UK. Said the couple:

“I can’t see what we’ve lost by travelling Economie. We don’t travel on the ship for a cruise: we travel to get somewhere. We don’t need piano bars, a spa or hairdresser.

“We used to drive through France, the Channel Tunnel, and have also taken the LD Lines ferry from Newhaven to Dieppe. Driving through France doesn’t really save money. Flying offers the benefit of time, if you’re not delayed. We used to fly from Southampton to Alicante and hire a car.

“I don’t think anything really is ‘cheap’ these days. It is a case of what’s easier to do.”

We found the “no frills” ferry service both civilised and enjoyable. The boys liked it so much that they were reluctant to disembark at Portsmouth. As Christopher Jones of Brittany Ferries suggests:

“The Baie de Seine doesn’t have all the entertainment and facilities of Pont-Aven but it does have a certain charm and ambience all of its own.”

For the budget traveller who is not in a hurry and enjoys driving, it does provide a feasible alternative to flying between the North of Spain and South of England.

As for the costs of the trip: because of our non-vital spending on overnight hotels during the road trip and filling ourselves with restaurant food, we exceeded the cost of fly-drive. However, the extra splurge was offset by using the van to ship useful items back to Spain – we even had a washing machine in the back.

And the road and sea trip was an experience in itself, with memorable moments for the family to recall… even if some of these concern how the Sat Nav misbehaved near Bilbao. On the return to the Sierra Nevada environs, we were satisfied that we’d enjoyed an “epic journey” that a flight from Malaga would never have achieved.

The following figures are based on a two week, 3,300km, trip for a one-parent family of three driving a van between Granada, Spain and Tyneside, England during November 2015, and based on our own experiences. Prices for cars on the ferry are lower than for vans. Hire car cost is for a mid-range model with space for family luggage. Some prices are approximated. All prices are in Euros, based on the GBP to EUR exchange rate of November 2015.