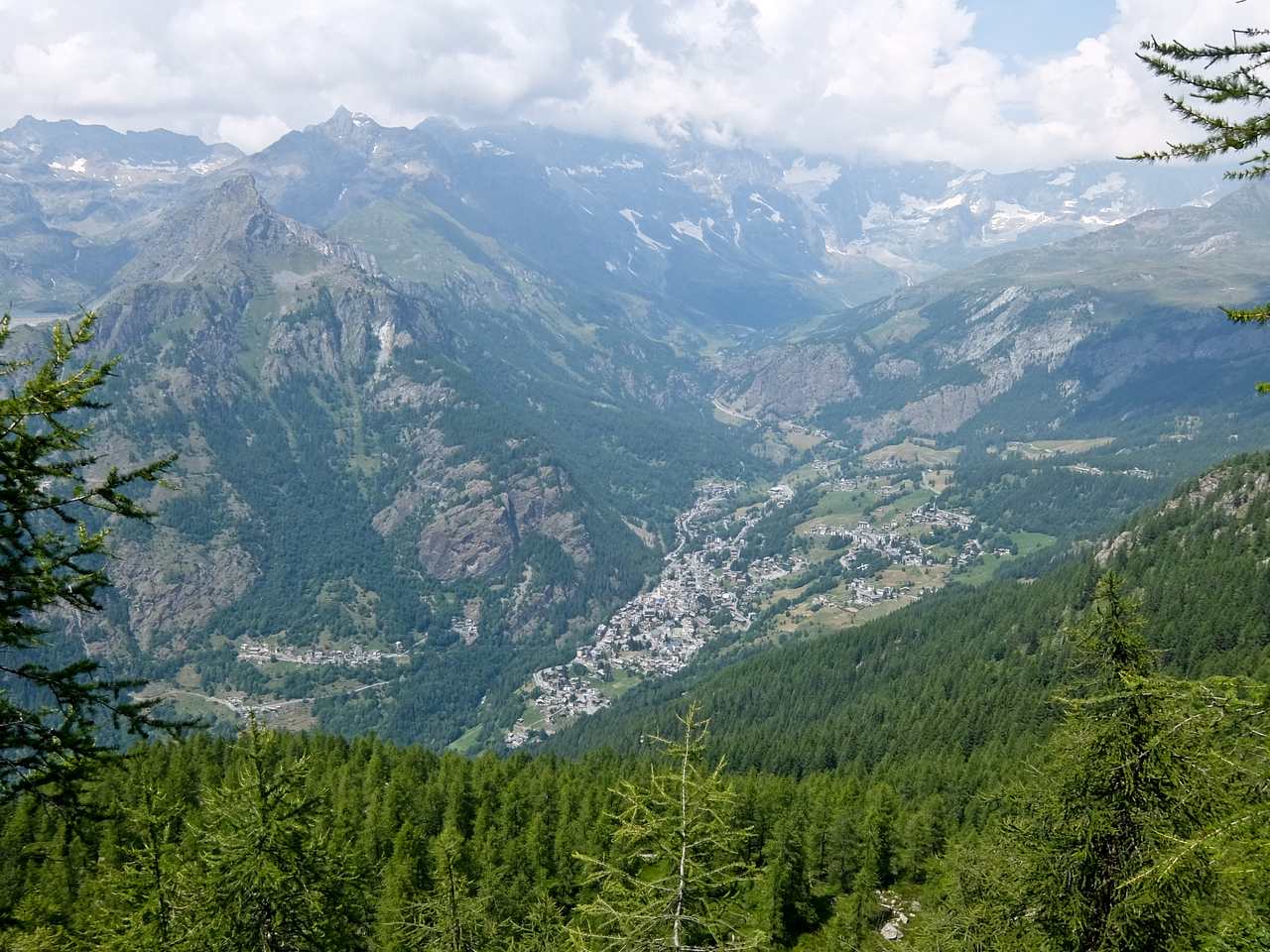 It’s a marvellous idea – six mountain huts have joined forces to create a seven day hiking tour, starting and ending in the village of Champoluc. Each night is spent in a different rifugio and the package includes dinner, prepared with local products, and DOC wines from the Aosta valley.

The route roughly follows a figure of eight, exploring three valleys, with marvellous views of the Italian Alps including the Matterhorn and the Monte Rosa range. 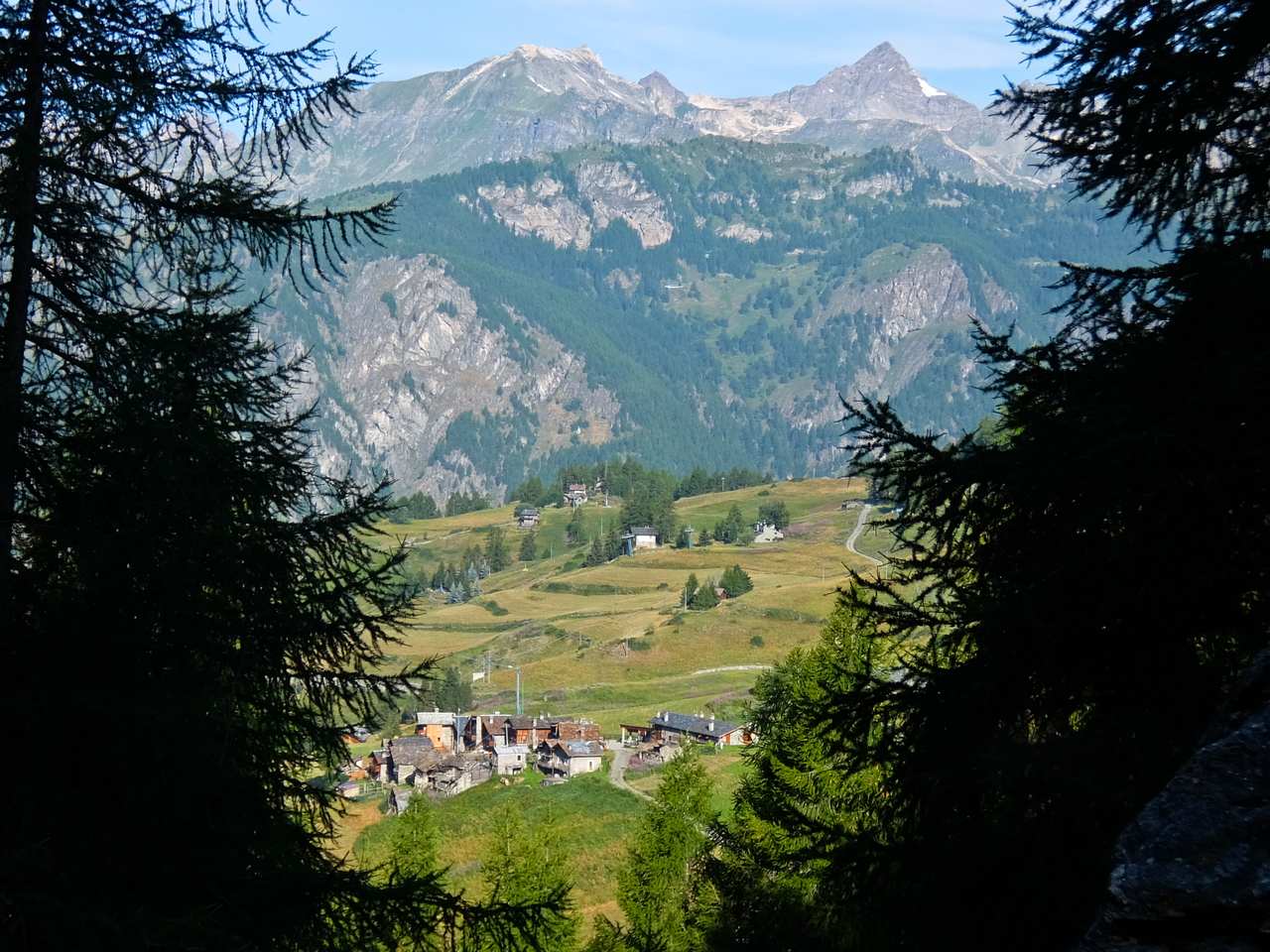 Leaving Turin, after crossing the flatlands, a tortuous drive through twisting hairpins, climbs to the village of Champoluc, in the upper reaches of the Ayas Valley. In earlier times this area was considered uninhabitable until it was populated by the Walser people, escaping poverty in Switzerland. These days it’s a thriving resort with skiing in the winter and mountain biking and hiking in the summer.

Before I arrive, I’ve already downloaded the App from the website, which provides me with a GPS route, and at my hotel I get a map, a lightweight towel and sheet sleeping bag. Although there is an option to get your baggage transported, I’m going to be carry everything on my back, so I’ve reduced my load to the bare minimum. I’ve also decided, perhaps foolishly, to double up on a couple of stages, reasoning that I can easily manage seven hours of walking in a day. 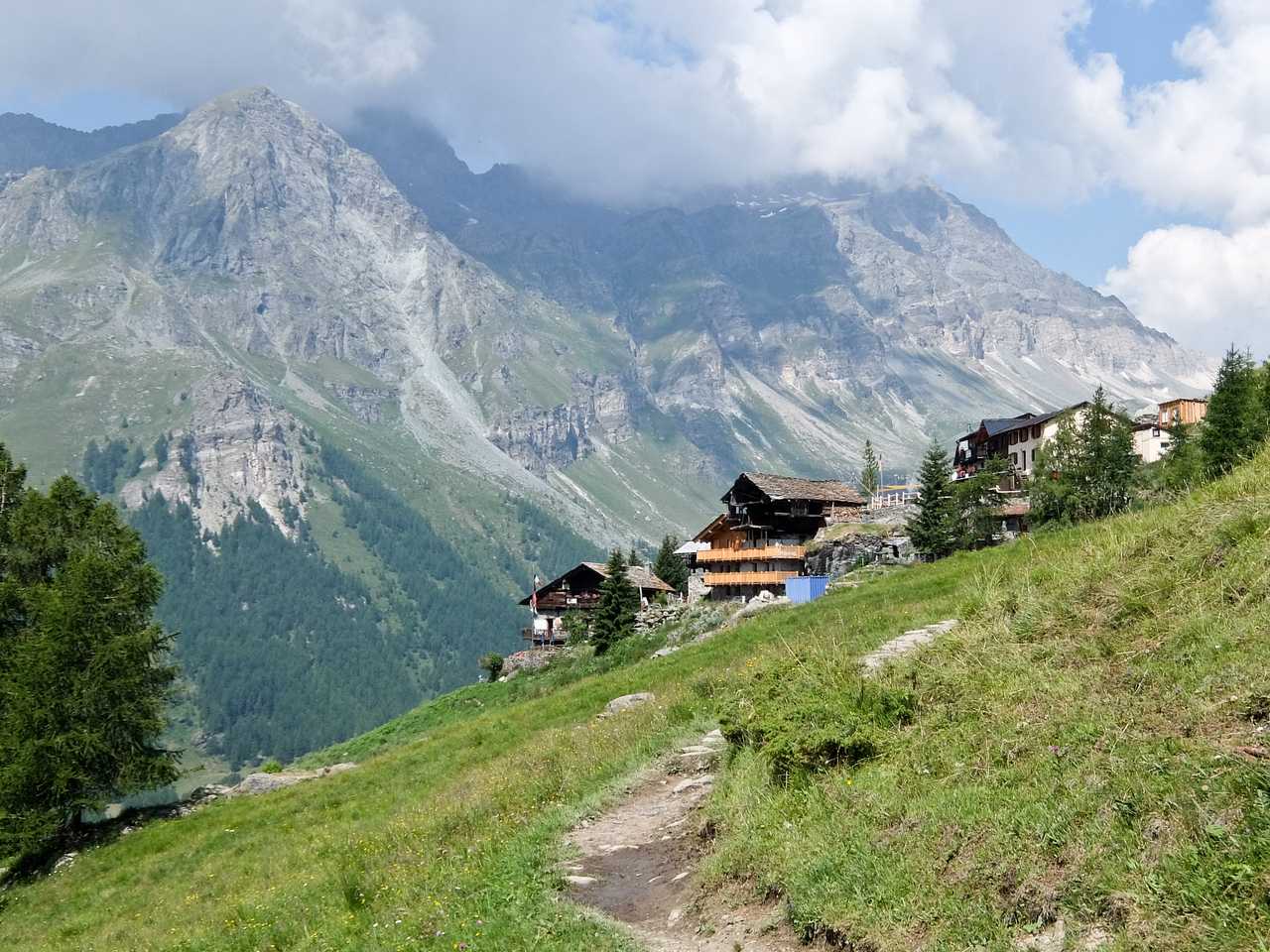 The weather is clear and sunny as I set out, climbing up through the forest by a stream and waterfall. It’s fairly steep but I’m fresh and anxious to get on. This is one of those two stage days, so I’m anxious to get on. I reach the tiny Walser village of Mascognaz, nothing more than a few houses and a church, and follow the side of the Ayas valley to Rifugio Ferraro. This would be normally the end of the first stage, so I stop for a lunch of polenta and vegetables, washed down with a glass of beer.

It’s then a steep descent on a pleasant path to Saint-Jacques at the head of the valley, before climbing up through forest on the other side. Above the treeline at around 2000m, there are rumbles of thunder and it begins to hail.

This turns to light rain but I reach Rifugio Grand Tournalin at around five o’clock without getting really wet. As in all the huts, sleeping arrangements are in dormitories, but I’m relieved to be sharing with only one other. There’s a hearty meal of minestrone, chicken with fried courgette and lashings of local red wine and I’m in bed by 10pm.

After my double exertions yesterday, I’m only doing a single stage today so can take it easy. Weather is sunny as I climb up to the Col di Nana and am overtaken by a large group of Russian hikers, all carrying heavy packs. I leave mine at the Col to climb the Becca Trecaré, a pointed peak at 3000m and am joined at the summit by the Russians. They’re from the Moscow Club Alpino and give me some chocolate, telling me it’s a tradition to share at the top. 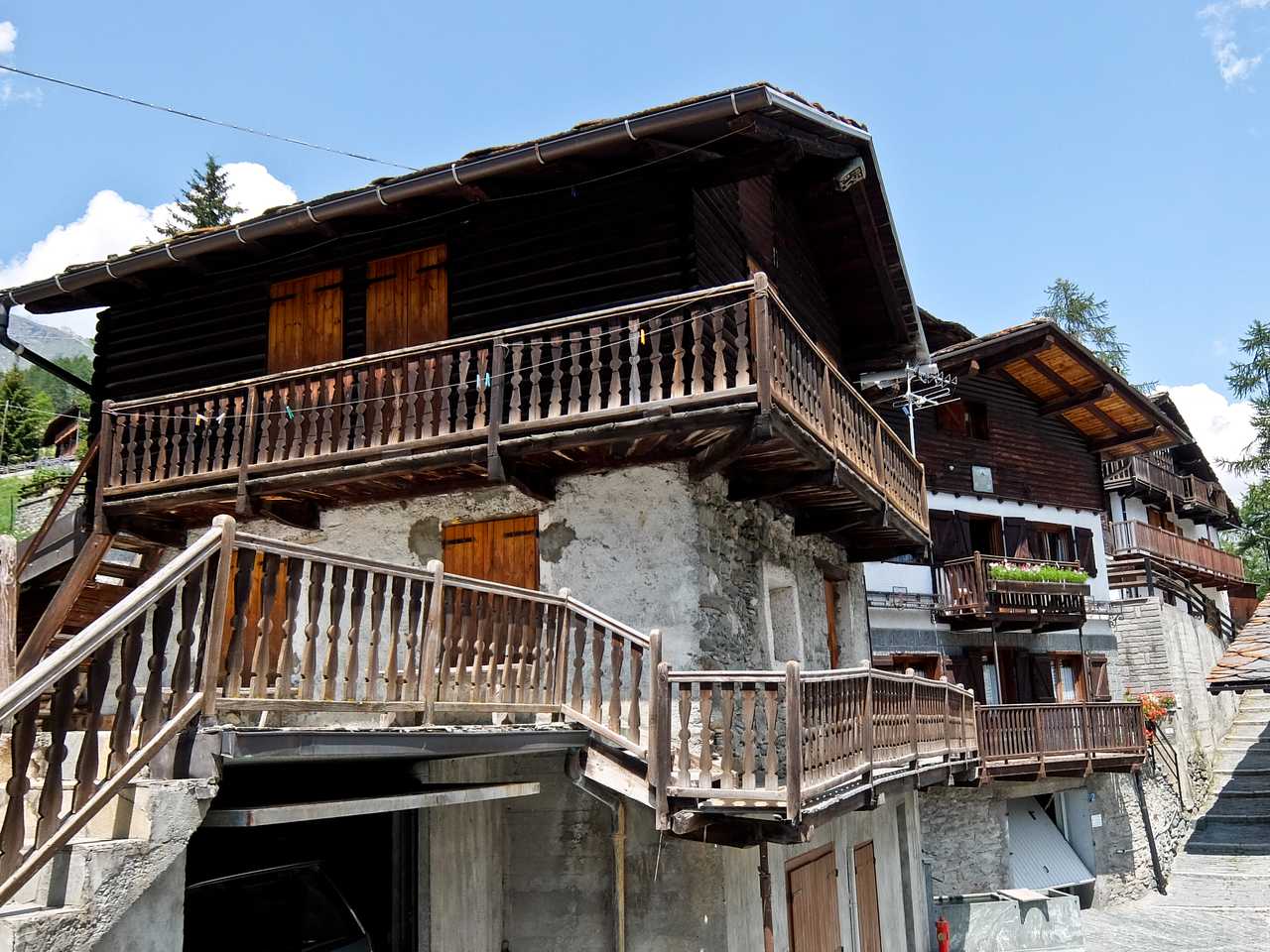 There’s a decent path down to Cheneil, another attractive Walser village, popular for families and their dogs. After lunch, another slight uphill before dropping down to Chamois in the Valtournenche and the Rifugio Ermitage.

Here I’m delighted to be given a dormitory all to myself, and Antoine, the manager, plies me with large glasses of his draught beer. He’s excited that a group of women trail runners, including the local champion, will be also spending the night and I join them for dinner. 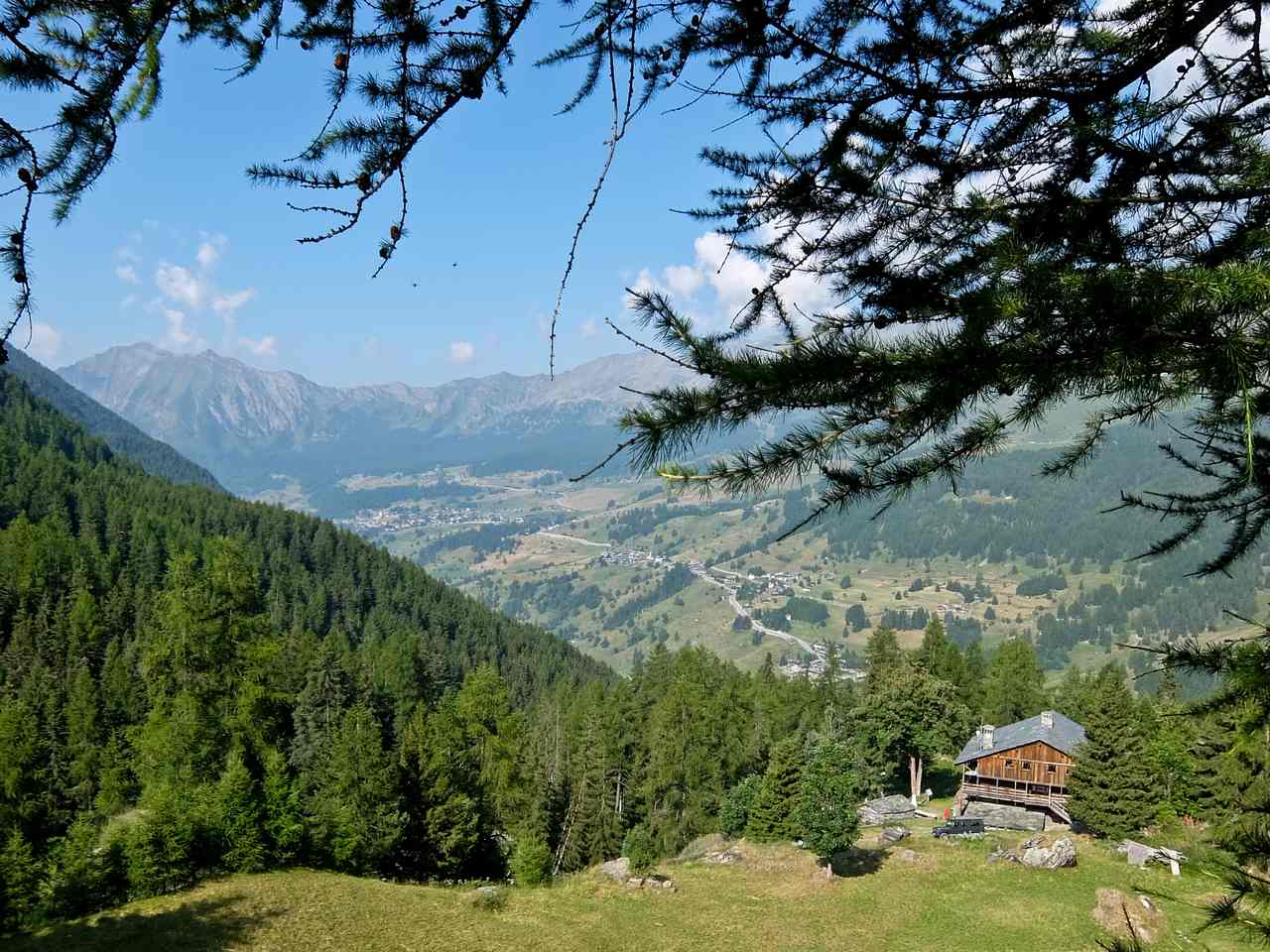 Unlike the trail runners who leave at 4am to catch the sunrise, I leave at 8am, prepared for a long day. There’s been a thunderstorm during the night but it seems to have cleared. I’m crossing back to the Ayas Valley, so there’s a steep climb to Col Pillonet, but I’m rewarded with glorious views of the Matterhorn and the Monte Rosa range. There’s a pleasant grassy track all the way down and I can see Champoluc below me.

Unfortunately I’m going to be hitting the valley lower down so it’s a long hot descent to the Evancon River. I’m not particularly pleased to have to climb up again to Mascognaz, which I passed on the first day, but the walk follows a figure of eight and there’s no choice.

I arrive at Rifugio Vieux Crest parched, as I’ve run out of water, but there’s draft beer and a pleasant welcome from the Sara, the owner. Even better I get a room with toilet and shower and make full use of it. Food here is also good.

This is another day when I’m tackling two stages and the weather forecast is not good. I start as early as I can and meet many trail runners as I climb up to the Col Pinter.

Today I’m crossing to the Gressoney Valley and reach Rifugio Alpenzù, just above, as the rain begins to start. Lunch is good with local cured Bresaola with grilled vegetables, then pasta carbonara, but outside it’s stormy.

I don my waterproofs and set out along the side of the valley. The thunder is heavy and flashes of lightning illuminate the trees. Clouds obscure the mountains and I turn to climb steeply and am soon in the mist. Fortunately the path is well marked and, as I reach the Colle di Valnera, the rain stops and it begins to clear. Rifugio Arp is just below me and, since I’m completely soaked, I’m grateful for a hot stove to dry my clothes.

I set out in thick mist but, as I start walking, it begins to clear. I pass several small lakes on my way up to the Colle di Palasinaz. I hear the whistles of Marmots, and startle a couple of Ibex.

I’m soon back down to the village of Mascognaz, for the third and last time. Back in Champoluc, even though I’ve been in the wilds for a few days, it feels strange to be back in civilisation.

I’ve been lucky – only a half day of rain and sun for the rest of the time, with glorious views from the tops. It’s a great hike that I can heartily recommend but just don’t make the mistake of attempting two stages in one day.

STAY: The Hotel L’Aiglon is a comfortable base in Champoluc.

TOUR: The Tour des Six costs 379 Euros for 7 days trekking, including six nights half board in mountain huts. They can also arrange transfers from Turin.

Travel Advice: How will travel be affected after Brexit?