Five Guys Named Moe first graced the scene in London’s West End in 1990 and has now returned to the capital after almost three decades. Inspired by a musical short written by Louis Jordan himself, it tells the story of down and out Nomax, who is wallowing in self pity and liquor after his girlfriend walks out on him. While listening to the blues on his 1930s style radio, a group of five “Moes” magically appear to comfort him and teach him some lessons about love.

What follows is a plethora of song, dance and comedy as Big Moe, Four-Eyed Moe, Eat Moe, Know Moe, and Little Moe attempt to cheer up Nomax and convince him to win back the affections of his ladylove.

For this production, the newly built Marble Arch Theatre has been fashioned into a New Orelans jazz saloon. While relaxing in the foyer before the show begins, you are encouraged to immerse yourself in the spirit of the age, aided by an impressive selection of cocktails at the theatre bar.

Much like the theatre itself, the staging is anything but traditional. VIP guests are seated around tables in front of the main stage flanked by a circular revolving platform. The rest of the audience are seated in rows of wooden chairs behind the platform, so prepare to get cosy with your fellow theatre goers.

The all-male cast are simply spectacular, bringing humour and feeling into every song. Each Moe has a distinctive personality and timbre: Little Moe is a cheeky chappy full of bounce, while Eat Moe’s love of food has certainly not impeded his ability to boogie. It’s hard to pick a favourite Moe, which is testament to the quality of their individual performances. Edward Baruwa’s Nomax also has an endearing charm that leaves you rooting for him despite his pathetic circumstances.

There are musical hits aplenty from the repertoire of “The King of the Jukebox”, Louis Jordan including Eat Moe’s Knock Me a Kiss and a joyous of rendition of Caldonia. The revolving stage really came into its own during Choo Choo Ch’Boogie where the five Moes imitated a steam train complete with a “smoking” top hat. 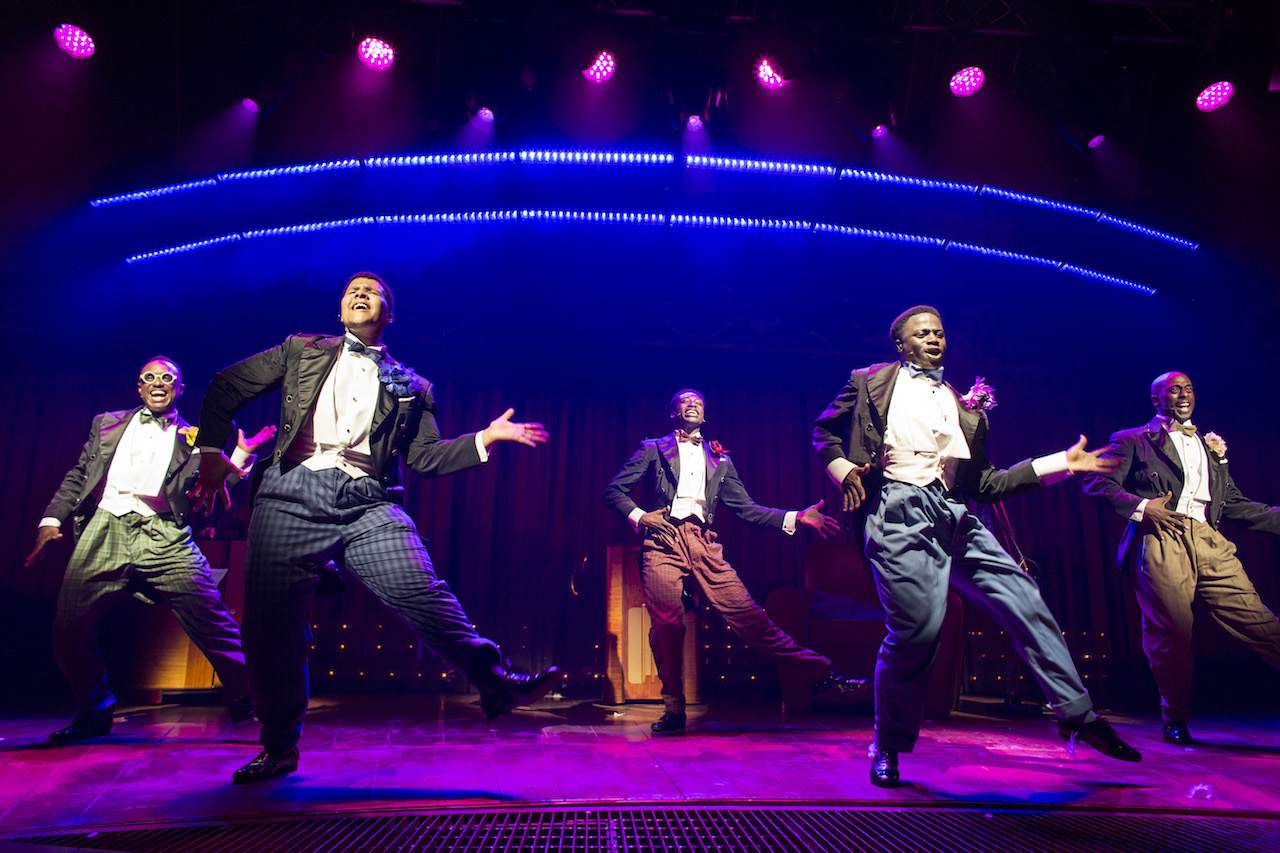 Audience participation is both welcomed and encouraged. You may even find yourself on the main stage singing Push Ka Pi Shi Pie or participating in a conga line. During the interval and after the main performance, the Moes delighted the audience by performing musical numbers on top of the bar.

There aren’t many costume changes but props are used to great comedic effect. The band is so good they received the loudest cheers from the audience at the end of the performance.

If there is a niggle it’s that the story line is fairly simple. However this really didn’t matter when the performance was so much fun. The standing ovation at the end was entirely deserved, and you would be hard-pushed not to leave with a spring in your step.

Book your tickets today – starting from £10

Uber is being banned in London