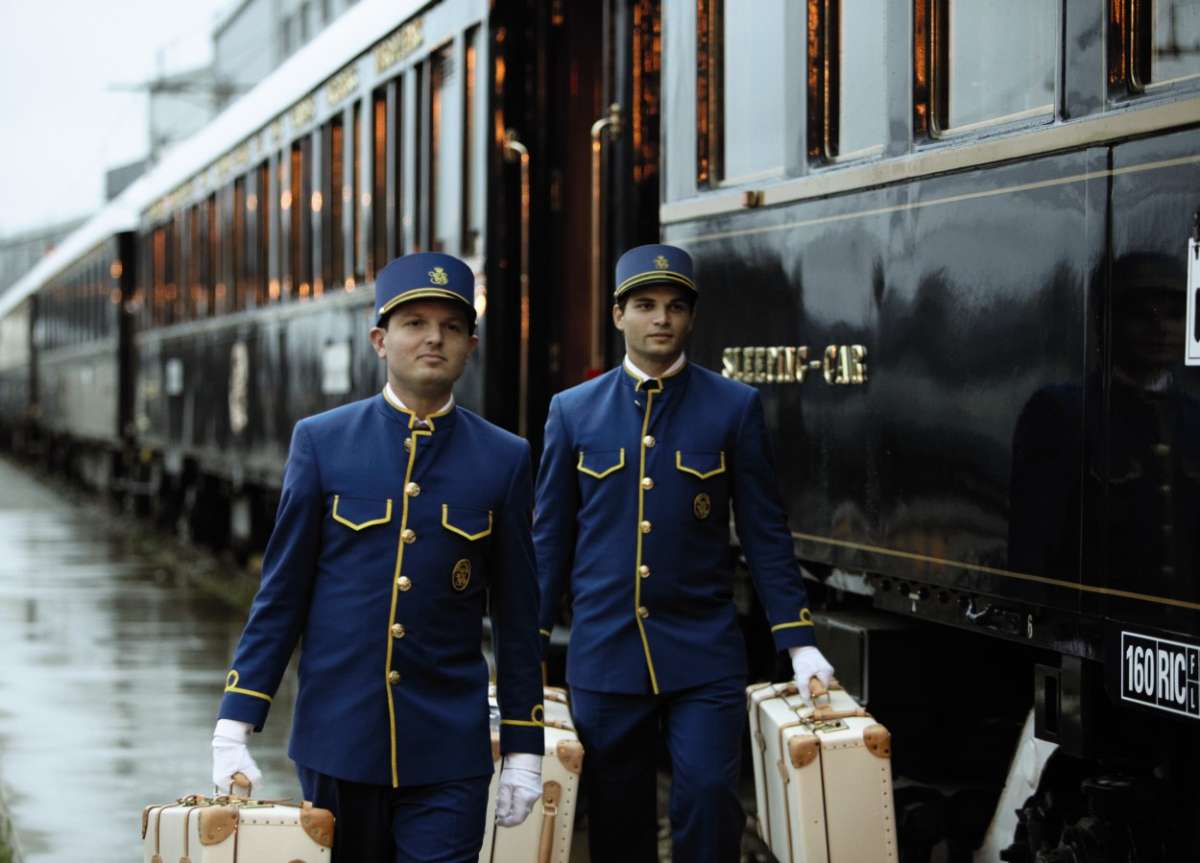 Over 20 years ago, when Britain became linked to the rest of the European rail network, the prospect of London to Venice on the Venice Simplon-Orient-Express became a reality with a through rail journey. This is a step back into the nostalgic past of the 1930’s experiencing the opulence of Rene Lalique glass carvings, marquetry wood engravings and sumptuous seating and to-die-for silver service meals.

So I booked on the first departure of the season’s 2016 Venice Simplon-Orient-Express from London’s Victoria station bound for Venice. I knew the UK stage of the journey would be on board a former Pullman (similar to the Golden Arrow) with the second stage through France, Germany, and through the Alps to Switzerland and then into Italy. 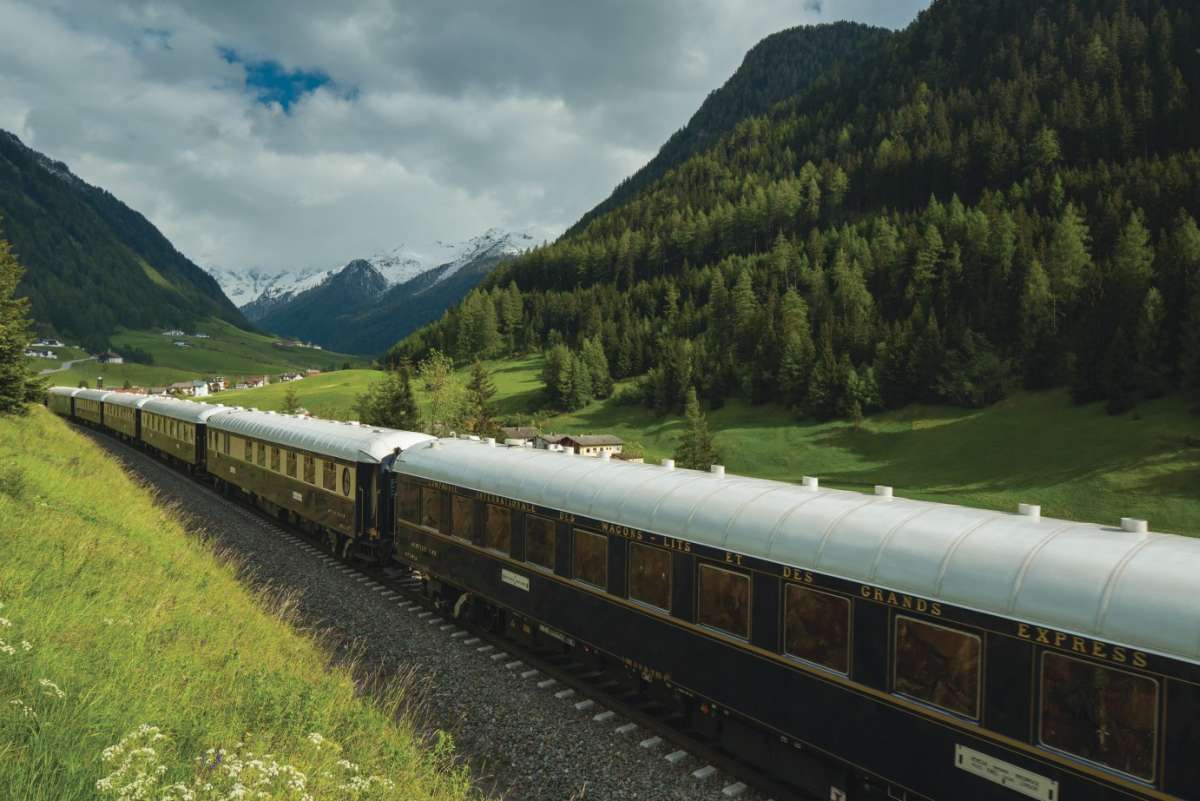 Imagine my surprise, horror and disappointment big time when having arrived at Folkestone on board the Belmond British Pullman, it was “everyone off”, then onto a bus for a drive to the Channel Tunnel terminal, off the bus, a walk through Passport Control, back onto the bus via a car park and then the bus drove into a shuttle train and onwards through the Tunnel. Inside the bus and once at Calais, it was stay on the bus for 25 minutes and a drive through the back streets of Calais to a railway siding where the real Venice Simplon-Orient-Express train sat waiting to “greet UK travellers!”

Once the real Venice Simplon-Orient-Express train set off from Calais everything was perfect. Staff were dressed in regal 1930’s uniforms; compartments were of the highest standard; food was outstanding although be warned, drinks ranging from a simple G&T to a bottle of wine were expensive. A Sainsbury red of about £9 costs about £80 on the train – but it was nicely served! 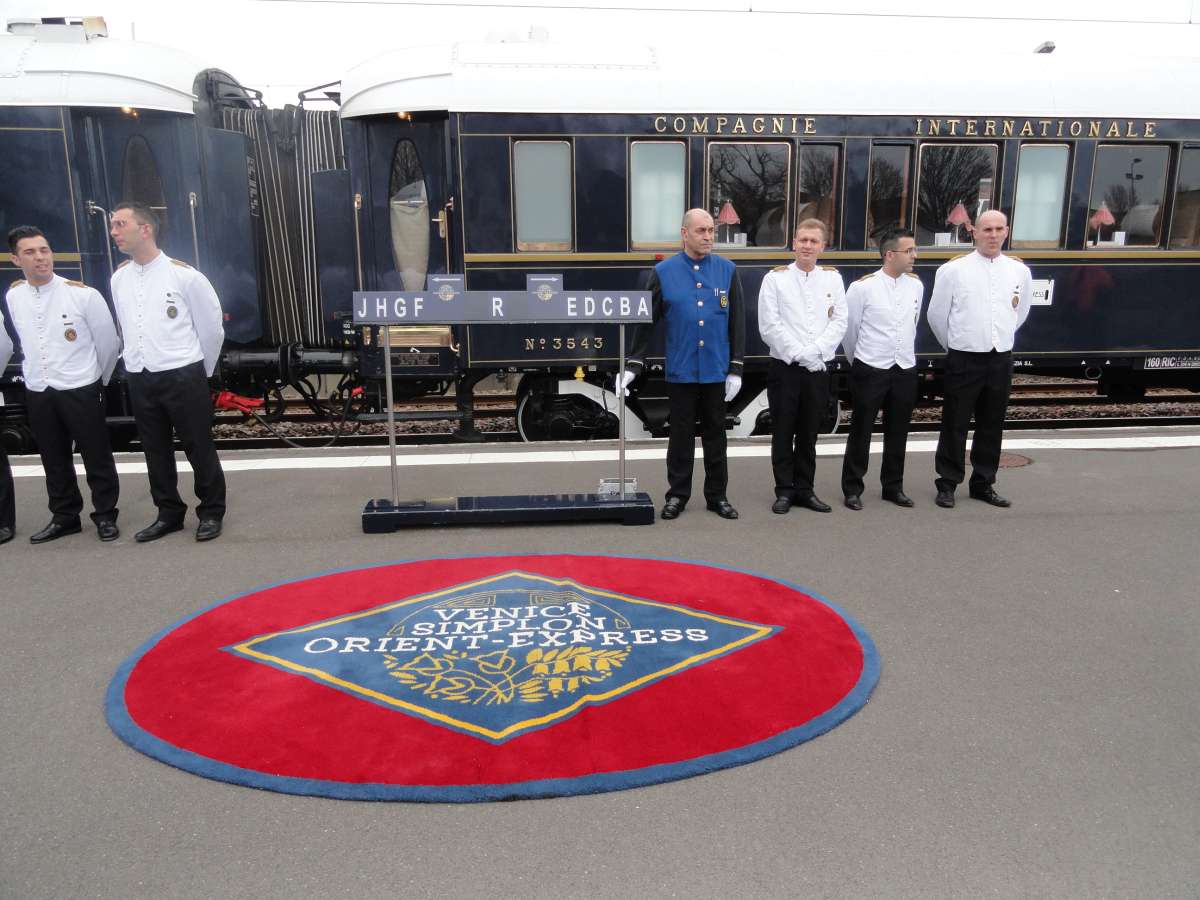 It was James Sherwood, owner of Sea Containers, who struck on the idea of resurrecting the Venice Simplon-Orient-Express in the 1970’s and he purchased two of the original carriages at a sale at Monte Carlo in 1977.

One of the carriages was “Audrey” which had been located in the back garden of a lady’s house. As part of the “sale” the lady makes an annual pilgrimage to Venice in the carriage which was once her garden shed!

I was one of the fortunate ones to travel to Venice in carriage “Audrey” which is unique with the opulent wood panelling and fittings. One of the other dining cars displays the famous and glorious Rene Lalique glass carvings. 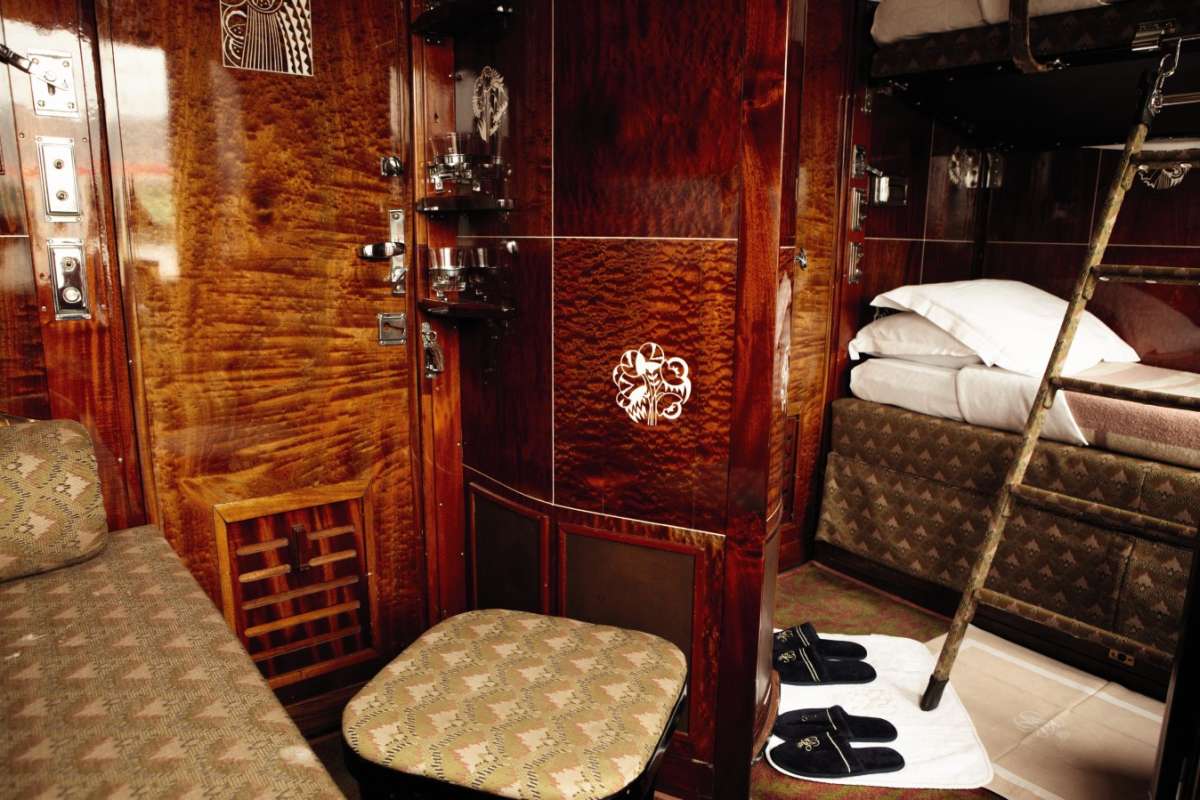 Inside a cabin (c) VSO

There is little doubt the Venice Simplon-Orient-Express is an experience worth the expense – and worth paying for.

Even the Belmond British Pullman provides luxury of a bygone era starting with Brunch of smoked salmon and scrambled egg, Champagne and a variety of nibbles to enjoy as the Pullman train slowly makes its way through the Kent countryside to Folkestone. At Calais Ville station you are greeted with the full regalia of 1930’s era uniforms, your own carriage attendant, drinks in your compartment and no luggage to worry about at all as your main suitcase is taken care of until you reach your Venice hotel and your “flight bag” is already loaded and waiting in your compartment once you board the Venice Simplon-Orient-Express train at Calais.

On the first evening you are “encouraged” to dress for dinner. Men in black tie; ladies in an evening attire of their own choice such as a cocktail dress. It is Champagne in the Lounge Bar dining carriage before being called for either the 19.00hrs or 21.30 hours dinner.  The menu is a mouth-watering choice of fish and steak of cheese and dessert. The wine list is extensive and wines are of the highest quality but be prepared to “gulp” at the prices. But then I suppose you would not be making such a journey without taking “add-on costs” into account first! 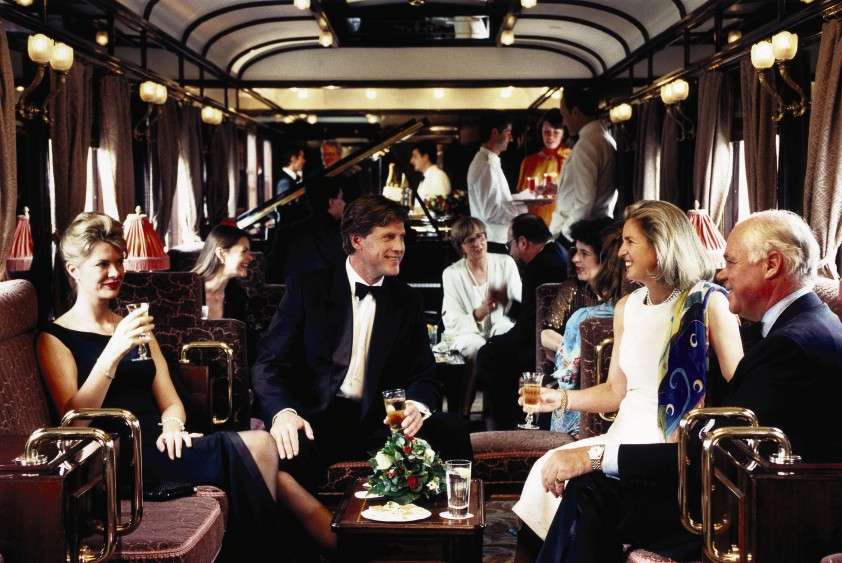 There is a first class pianist; a Chef du Tran; a Head Waiter who ensures everything is “tip top”; and silver table service leaves you in no doubt people in the 1930’s really knew how to live and enjoy life.

The compartment is compact and you have only a wash basin. The toilet (one per carriage) is at the end of the corridor but the Venice Simplon-Orient-Express do provide passengers with a very nice (for keeps) dressing gown and slippers to make that middle-of-the-night corridor visit that much more comfortable!

After a night’s sleep of sorts and waking up to the snow-covered Alps and the start of the journey into Italy, breakfast is served in your compartment. There is an alternative of a Champagne and lobster breakfast for the romantic at heart in the dining carriage at around £150. Very romantic. 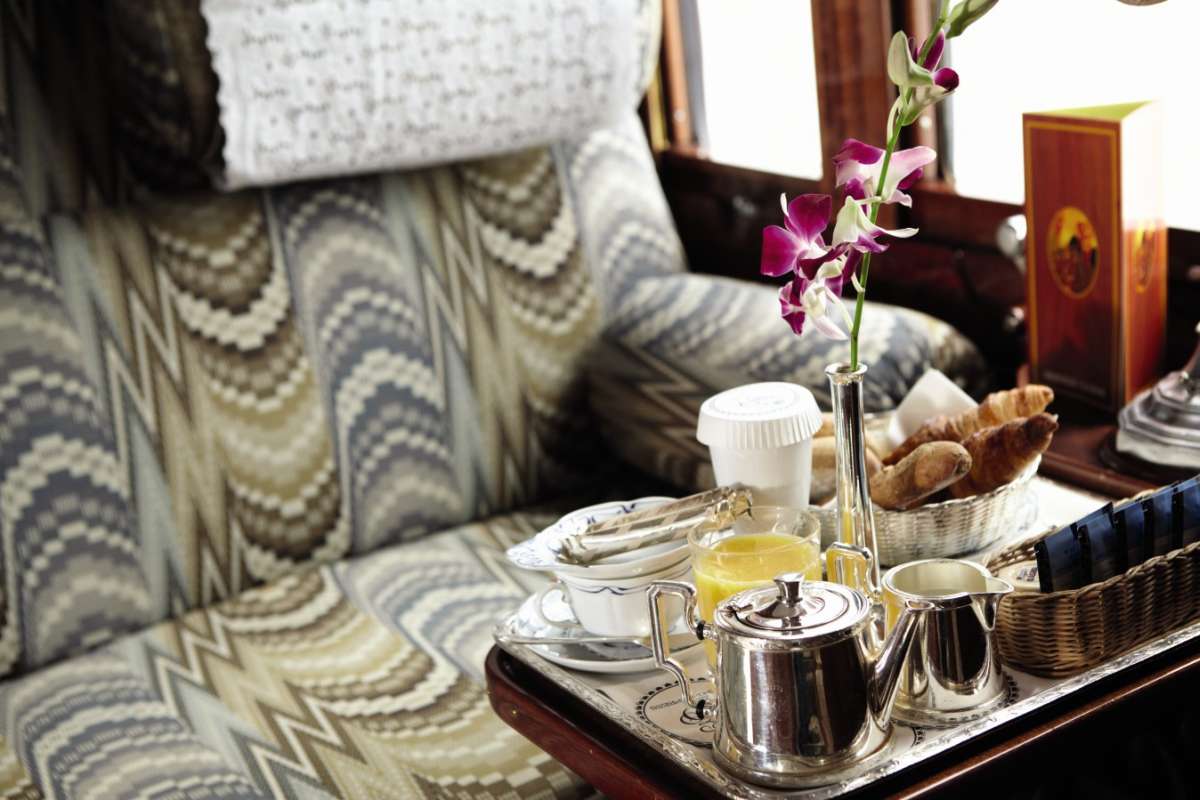 After breakfast you take in the fantastic scenery of the Southern Alps and northern part of Italy. Down the sides of Italian lakes before heading into Milan for the fourth and final locomotive change. At each frontier you have a new locomotive and driver from that country you are about to travel through.

Lunch on the second day comprises: Pan-friend scallops on the bed of pureed peas in mussel emulsion and red beetroot; this is followed by Duck breast roasted with redcurrants and accompanied by green beans. Then there is Zucchini flower stuffed with lemon grass-scented black and white quinoa. Finally, orange cheesecake with lime zest. And – oh yes – do not forget the wine and a generous opened-ended credit card to pay for a bottle of appropriate wine – or you will look the odd-one-out! 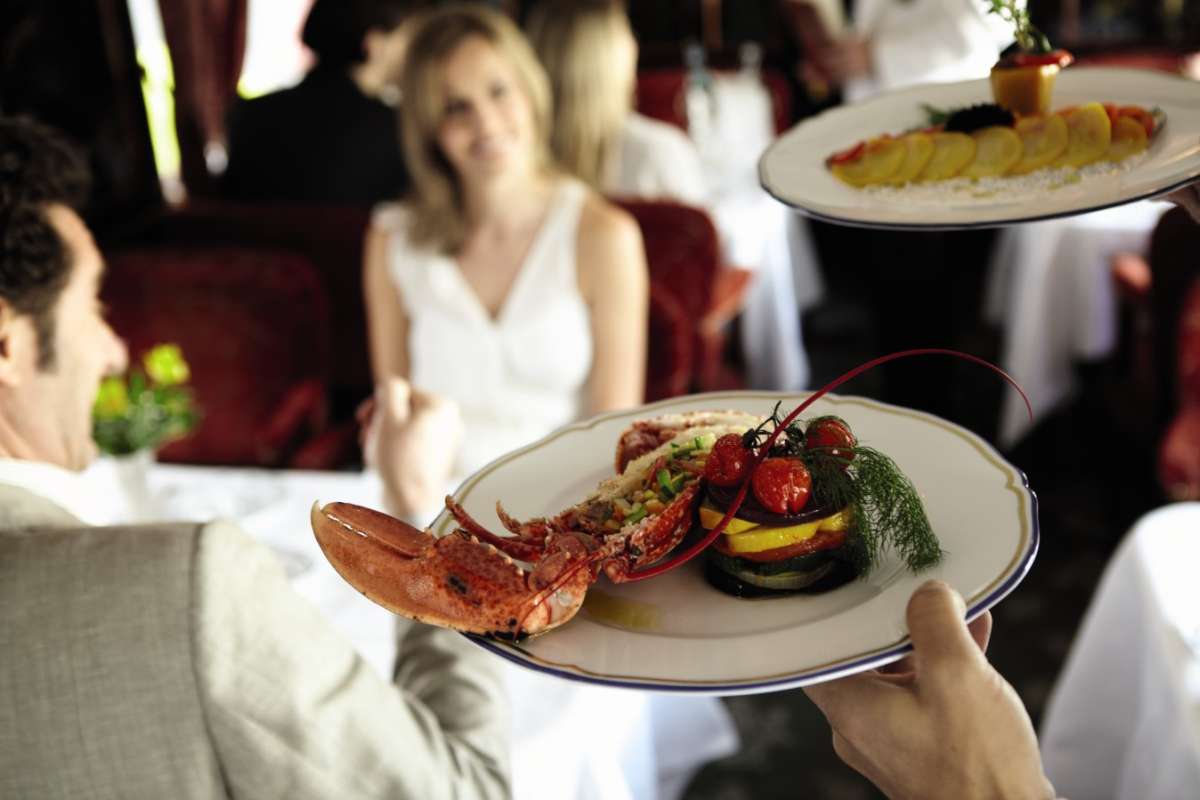 The Venice Simplon-Orient-Express approaches the coast and soon Venice comes into view. It was Mussolini who dreamt on the idea of linking the main island with a rail connection across the Lagoon. These days a road runs alongside the railway with a huge parking house as cars have nowhere to go – nor are they allowed to go anywhere – on any of the islands. The train station is large, reasonably modern and hectic but once again Venice Simplon-Orient-Express staff are waiting on the platform for travellers. You are escorted – by water taxi – to one of the numerous hotels. The main hotel used by the Venice Simplon-Orient-Express is the Belmond Cipriani Hotel (read our review) but I selected the Londra Palace Hotel on island where St. Mark’s Square was just a 10 minute walk away. This proved an excellent choice as not only was my hotel first class with excellent service but I avoided water taxis as I could walk to the Basilica, museums and explore the many narrow canals and bridges between this and the Grand Canal. I had an excellent choice of small cafes and restaurants for meals during my four days in Venice although nothing was “cheap” with the exception of a slice of pizza (3 euros) or “just one cornetto” (2 euros)!

If you hire a private water taxi – hotel back to the railway station – the cost was 70 euros for a 15 minute journey.

I took a 45-minute gondola ride through the narrow canals with an excellent Gondolier named Marco (everyone knew Marco). Coming from a family of many centuries existence in Venice his knowledge of buildings, construction and prediction that not only is Venice sinking and the water level rising but in 100 years’ time Venice will “be no more!” 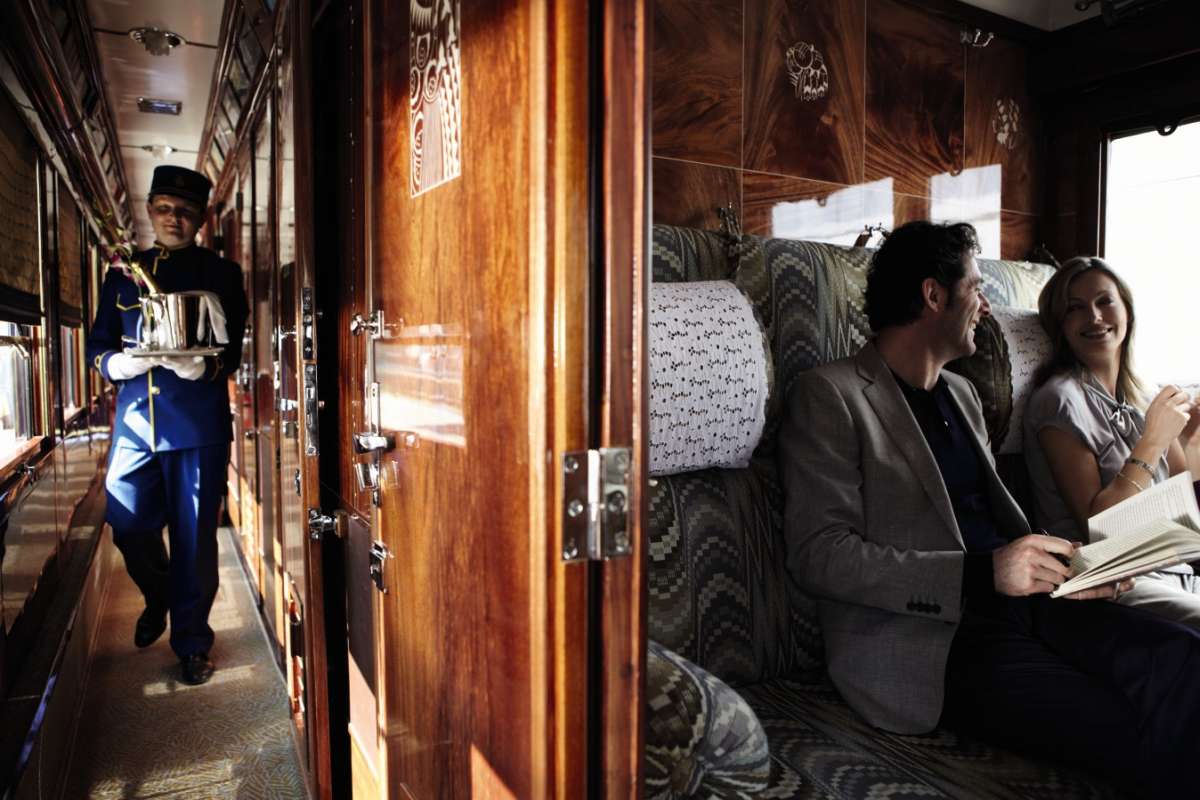 Costs: Extra hotel days in Venice. At least £150 a day – without meals

Meals: Allow up to £200 per day for lunch and dinner with some wine

Hotel Londra Palace: Book On-Line for “deals” or use your local travel agent to plan and book your entire trip. I used: Howard Travel of Trowbridge, Wiltshire, and was expertly guided through each stage by their representative “Wayne”.