Cruise guide: Why the Baltic can still make waves with Oceania cruise company

Seven countries and nine magical calls in only ten days ­– you must catch your breath due to both the beauty and the rollercoaster ride. Oceania Cruises proves that sailing the Baltic is still a magnificent option despite its jewel in the crown – the elegant Russian city of St Petersburg – being off the itinerary most likely for years to come.

Nine nations have a Baltic coastline, and our Northern Realms cruise visited Germany, Denmark, Sweden, Finland, Lithuania, Latvia and Estonia. Aside from Russia, the only one missing was Poland – Gdansk was cancelled without explanation a week before we set off.

Oceania is an upmarket cruise company with a big American clientele, but while our ship, the 1,250-passenger Marina, wasn’t full, guests had no hesitation in exploring the destinations that were all busy with life as normal.

On board, the lifestyle – it’s near impossible to go through a meal without lobster in some fashion, and there are steaks aplenty – was equally relaxed. 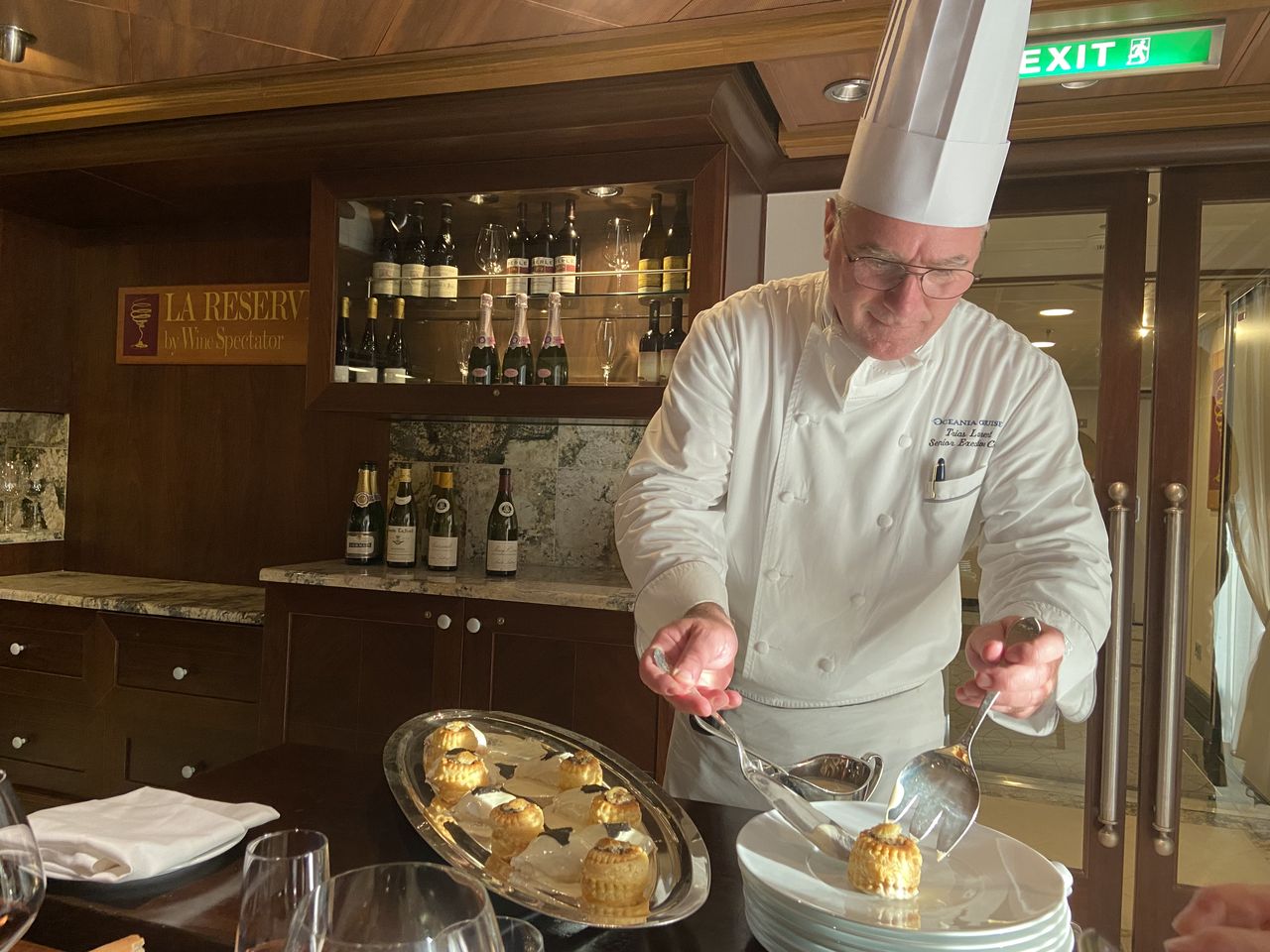 Unlike many cruise companies, the speciality restaurants – Polo Grill for steaks (and whole lobster!), Toscana for Italian (tagliatelli with a half lobster), Jacques for French (lobster thermidor) and Red Ginger for Asian (lobster pad Thai) are all free.
Oceania prides itself on an East Coast country club feel and Marina is at the heart of that, with the pool deck subtle in pale wood, pristine white towelling covered loungers and the Waves Grill which offers a choice of cooked-to-order Alaskan salmon or soy-ginger marinated ahi tuna burgers alongside varied beef options for a lunch that lingers late into the afternoon.

Corridors are lined with original art and bars are elegantly understated. Entertainment included a couple of Brits – singer Philippa Healey, a former star of Les Mis in London, doing songs from the shows, and Tim Abel, a frenetic, chatty pianist racing through musical styles.

The ship is relaxed and smart – no shorts for dinner, but no bowtie evenings either – and a perfect place to recharge on a cruise when trying to get the most out of a different destination each day.

We fly to Copenhagen and get a brief glimpse of the city as we head to the cruise terminal. Lunch in the open-air at Horizons buffet restaurant – appropriately enough seafood classic bouillabaisse – before departing. By dinner, we were at Øresund Bridge, the one that connects Denmark with Malmo in Sweden and which stars in Scandi police thriller The Bridge. Except we don’t go under it – part of the 10-mile crossing is by tunnel so we sail past the bridge where it dives into a little island.

Kiel in Germany, entrance to the Baltic where the Kiel Canal emerges after cutting across the country from the North Sea. We visit the canal locks and see container ships serenely coming and going. Next it’s Laboe Naval Memorial along the coast, a stirring 236ft brick tower with a curving back that honours sailors who lost their lives at sea. The view from the top is a wonderful mix of forest and water but underground is just as impressive, a walkway beneath the parade ground passing a subterranean hall of remembrance before emerging at a contemporary museum which tells the story of both German and British heroes amid models of ships. 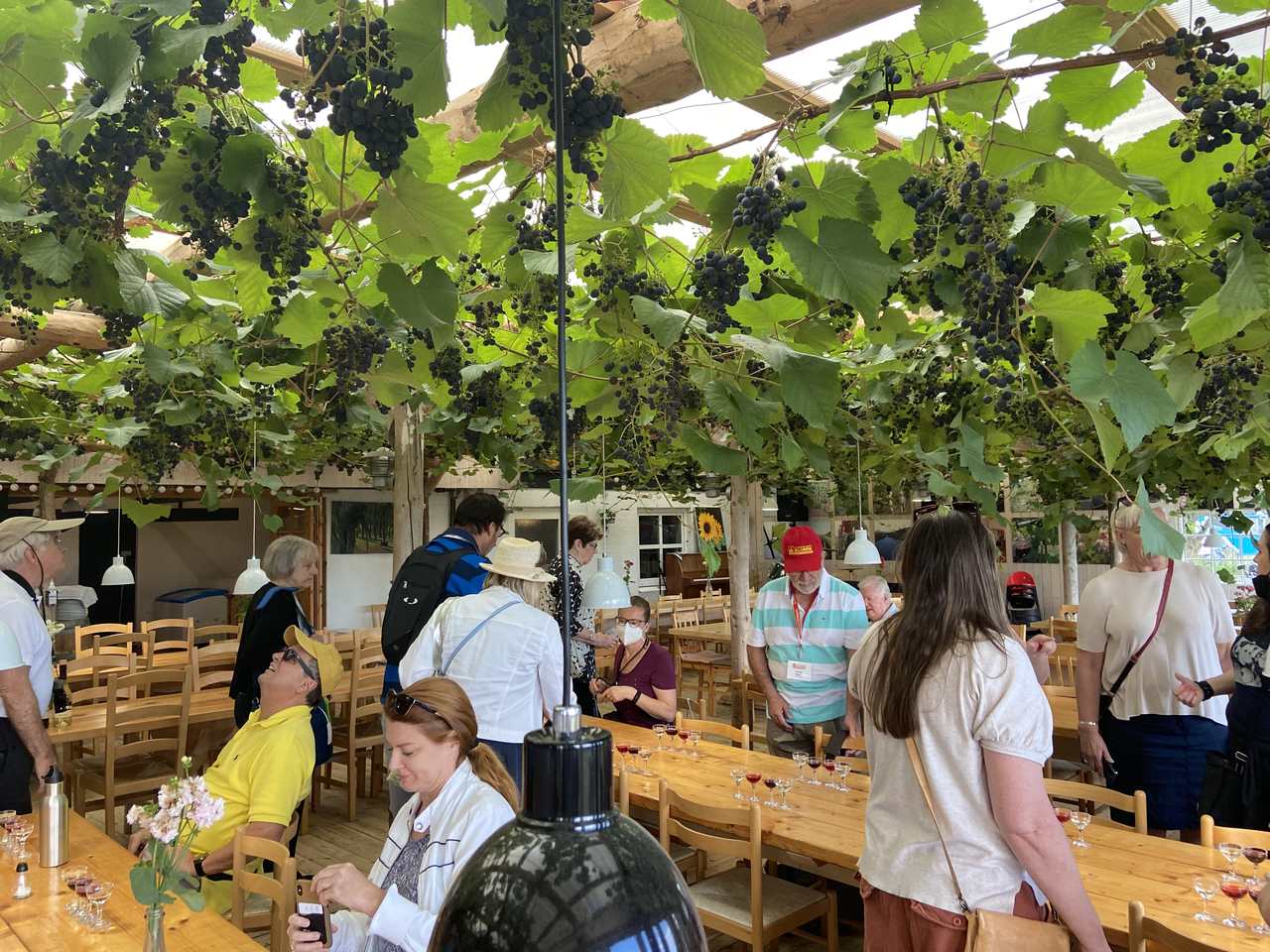 This should-have-been-Gdansk day when we visit the benignly agricultural Danish isle of Bornholm; 2022 cruise calls have doubled from the usual 60. The peace is shattered by a pair of F-16 fighter planes newly stationed here, we’re told, to dissuade interlopers. All’s calm, however, as we visit Lille Gadegård vineyard, Denmark’s biggest.

Amid strutting peacocks, joke-telling owner Jesper Paulsen’s mighty pig seems equally oblivious to the wider world as he feeds it a bottle of Coke. We sample red, white, a sparkling strawberry and a honey schnapps, a divine coming together of grape and the produce of his own hives.

Our Taste of Bornholm tour continues at Hallegaard sausage makers where we sit in the sun and nibble salami-style treats with crusty rye bread.

Visby, a walled, medieval port town, a Unesco site, on the Swedish mid-Baltic isle of Gotland. Awash with cobblestone streets and church remains, we’re in the middle of the Medieval Festival, all hog roasts and dressing up – it’s an eerie summer’s afternoon, like an early episode of Dr Who, as folk, all gaiters and white bonnets, all walk solemnly about. 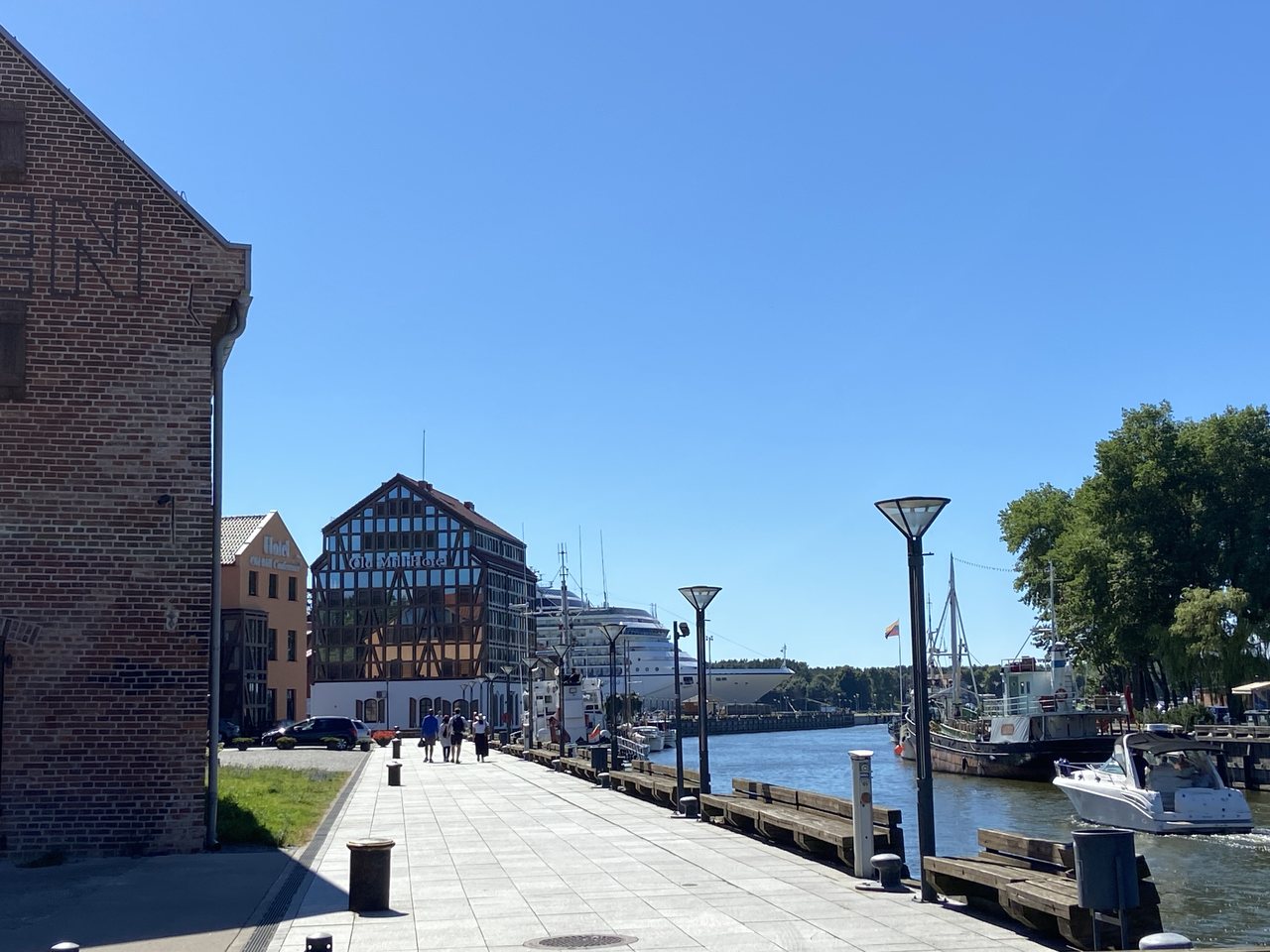 Klaipeda, the ancient Lithuanian port that has spent its history being juggled by Russians, Swedes and Germans. Across the harbour is the Curonian Spit, a 60-mile Unesco-protected stretch of beach, dunes, pine forest and small towns that, halfway, enters the standalone Russian province of Kalininagrad.

Our e-bike tour takes us across a ferry, packed with holidaymakers, to the spit, a place of walks, lazing on sands that look as a free as the California coast, historic sites and the Lithuanian Sea Museum with its aquariums and family of pelicans that live in the moat.

Riga, the Latvian capital, is packed with early 20th century Art Nouveau buildings, many by Russian architect Mikhail Eisenstein. Our lively guide, Zana, walks us along the beauty-lined Albert Street, round corners to more treasures and through the National Museum of Art. On our mini-bus tour we catch a glimpse of a looming edifice across the Daugava River, which Zana tells us is the Victory Monument, a 260ft Soviet chest-beater. 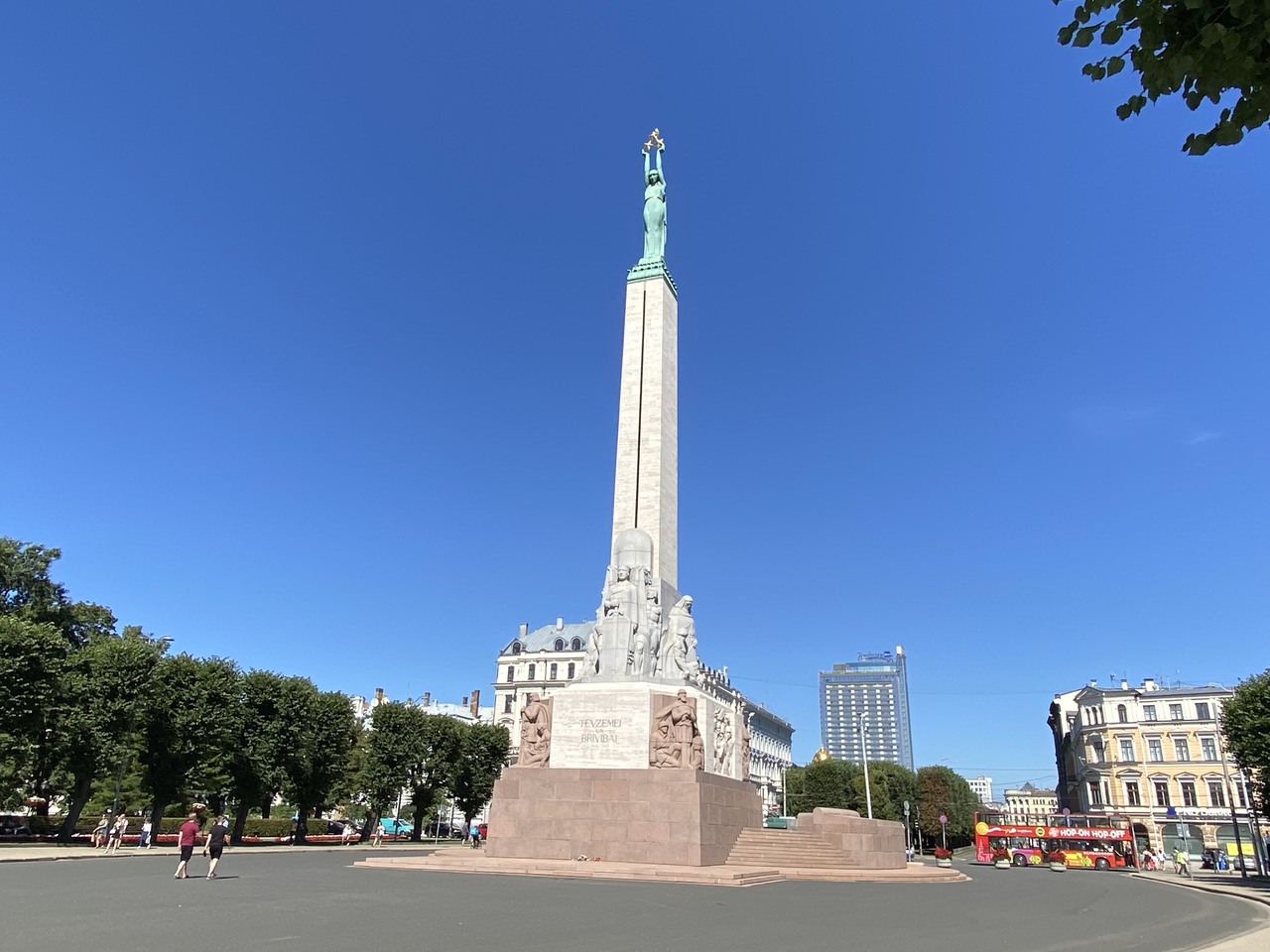 Even more excitable than earlier, she tells us that locals call it the Occupation Monument and that the city is demolishing it shortly. She asks if we want a close-up view and our driver – who gives it an unprintable name related to Putin – does a hasty U-turn so we can circle the barrier-ringed park guarded by police.

Later we walk along City Canal, snaking through gardens and passing elegant buildings and the Freedom Monument, a truly beautiful sight, a towering pillar topped with a female statue, arms aloft, honouring the fallen in the War of Independence following Russia’s 1918 invasion.

Within two weeks, the monument was gone, with eye-opening BBC website footage of it crashing to the ground.

In Tallinn, Estonia’s capital, restaurants ringing the idyllic medieval market square thumb their noses to Putin, displaying rude messages setting crowds of happy tourists, mostly from a clutch of ships, giggling. The country, with its 180-mile border with Russia, has known Danish, Swedish and Prussian rulers.

City walls stand tall, while under the Kiek, the largest medieval tower in the Baltic, I tour the spellbinding earthwork tunnels, some 50ft down, started in the 16th century so troops could move around safely. 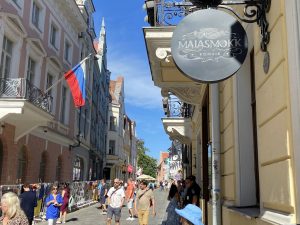 Even here the modern world intrudes, our young guide telling us how in 1944 1,000 civilian lives were saved by the hideaway when 300 Russian bombers destroyed much of the city to anger German invaders – likening the event to Russia’s “revenge” attacks in Ukraine.

As we walk through the bustling shopping area (and past the Russian embassy on a cobbled street, fenced in behind anti-war posters), we’re told politely that Estonia didn’t gain its independence in 1991 but restored it, having spent 1918-1940 a democracy before Russian rule.

Helsinki, Finland’s capital, is alive and happy, the waterfront market packed with visitors a world of reindeer steaks and salmon burgers. I wander the historic streets, marvel at the grandiose Central Station, surrounded by sturdy stone statues, and reach Oodi, an architectural marvel of a library in glass, steel and wood. It’s Sunday afternoon but there’s a girl gymnastic/dance duo upstairs (no one shushing the music), restaurants and coffee bars are doing a roaring trade – and the front desk is lending out footballs so youngsters can play outside. 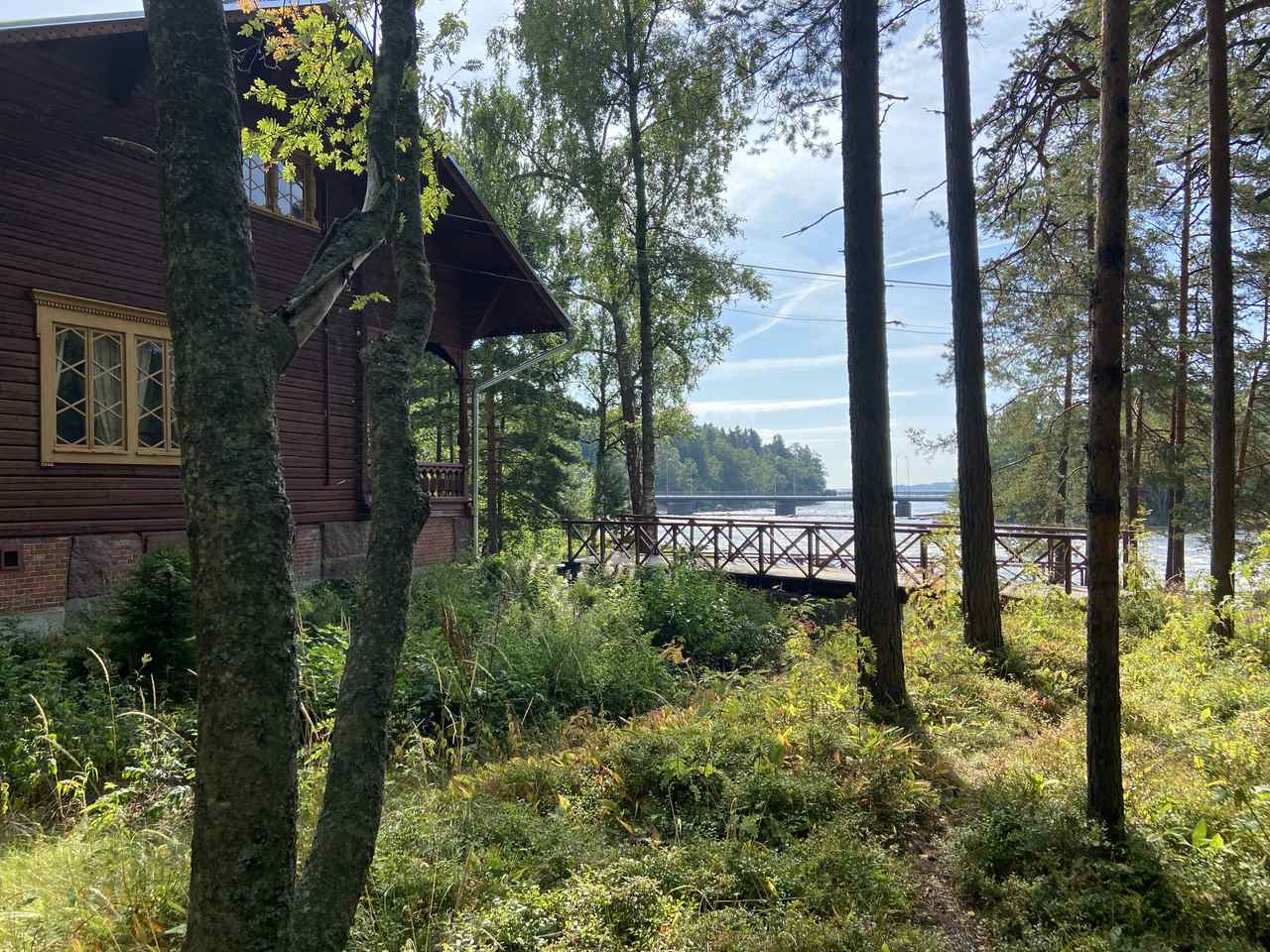 The closest we get to St Pete is Hamina, a pretty little Finnish town with a New England feel 25 miles from the Russian border; St Pete is 150 miles away but near enough for road signs. And our tour takes us to Langinkoski, a beauty spot on the rocky rapids of the River Kymi. The Imperial Fishing Lodge, now a museum, was Russian Emperor Alexander III’s holiday home. Fittingly, he and his family used to cruise from St Pete in the steam yacht Tsarvenna in the late 1800s, enjoying salmon fishing and simple meals.

Final day and Stockholm, the Swedish capital, looks beautiful as we approach on a long cruise through islands and forests and equally grand from the centre. Ignoring several millennia of Viking history I set off on a waterfront walk to the Abba Museum. It’s been open since 2013 but is busier than ever… advance booking only, timed tickets and crowds outside. It’s a surreal alternative to the historic charm of the Baltic but the pre-Abba musical career of the members in the late 60s in word and film is a fascinating counterpoint to the singalong booths. Come evening and it’s a small boat tour of the waterways, a soothing end to a non-stop circuit of the Baltic, where concerns for the harmony of Europe are never far from the surface, yet the streets and attractions are as busy as ever.

You might miss St Petersburg – but don’t miss this. Seven countries and an entire ocean. Every city is a gem, and the little places in between offer a change of pace.  Not every cruise offers quite this depth, but the Baltic is a place of beauty from end to end.

When is the best time to visit Thailand?

One of the Best highest rated Cruise travel