Top 10 things to see and do in Nothern Ethiopia 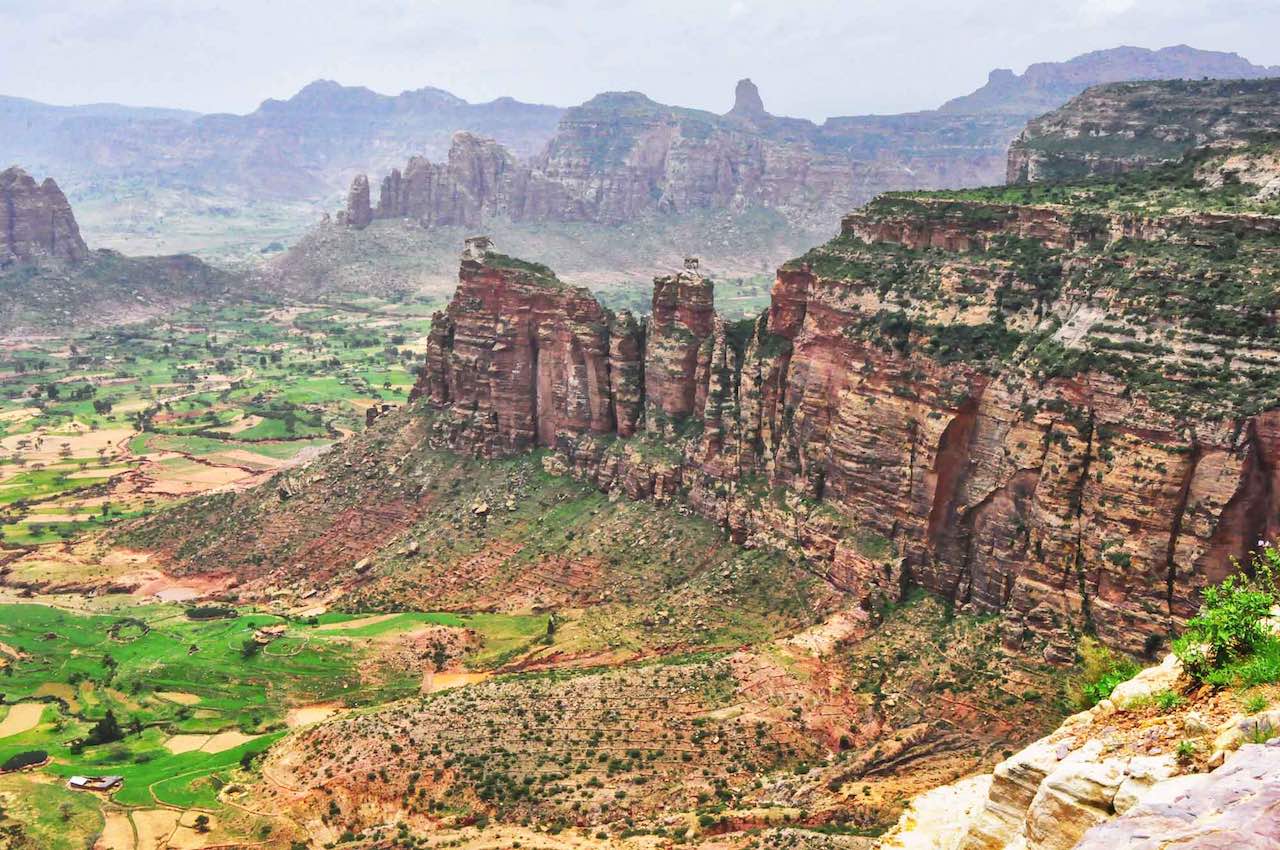 From the well-trodden Historic Route and rock-hewn churches of Lalibela to the jawdropping landscapes of the Danakil Depression and Simien Mountains northern Ethiopia packs in some of Africa’s most incredible sights and experiences. Factor in the rich culture and gastronomy and this under-visited gem, which has been labelled the ‘cradle of humanity’, delivers a might wallop of experiential travel opportunities. Here’s our look at the region’s ten best experiences:

Best known for its complex of rock-hewn Mediaeval churches the town of Lalibela is one of the undisputed highlights of Ethiopia’s northern Historic Circuit.

Most of the complex’s 11 rock-hewn churches date from the 12th-century rule of King Lalibela, who sought to build a ‘New Jerusalem’ there. While entrance costs a weighty US$50pp it’s a must-see, with highlights including the remarkable Bete Giyorgis, its cruciform-shaped design carved down into the bedrock. You can also hike to historic churches outside the complex such as Yemrehanna Kristos.

Cap the day with a scenic sundowner or meal at the quirky Ben Abeba, overlooking the valley then head to Torpedo Tejbet to sip Ethiopian honey wine, Tej, while enjoying the resident masinko-playing Azmari as he wanders the room conjuring comical songs about the patrons. Great fun.

This fascinating city was once centre of the powerful Aksumite Kingdom (circa 100-940 AD), the monumental carved granite monoliths of its Stellae Park a reminder of past glories.

Locals say Aksum was home to the fabled Queen of Sheba and her son, King Menelik I, brought the biblical Ark of the Covenant here from Jerusalem. To this day it’s said to reside at St. Mary of Zion Church.

While the Ark is kept firmly out of sight you can experience a candlelit procession called Mihla, or Mehelela, where priests carry a replica of the Ark through the streets accompanied by thousands of chanting, white robed devotees. Occuring on the first seven days of each month, according to the Ethiopian calendar, it’s an incredibly moving experience. Be sure to arrive at Daro Eila square in good time before the procession leaves at around 5am.

Back in the 17th century Emperor Fasil centred his Empire on Gondar and his Fasil Ghebbi, or Royal Enclosure, remains one of the city’s key attractions (entrance costs Birr 200pp). 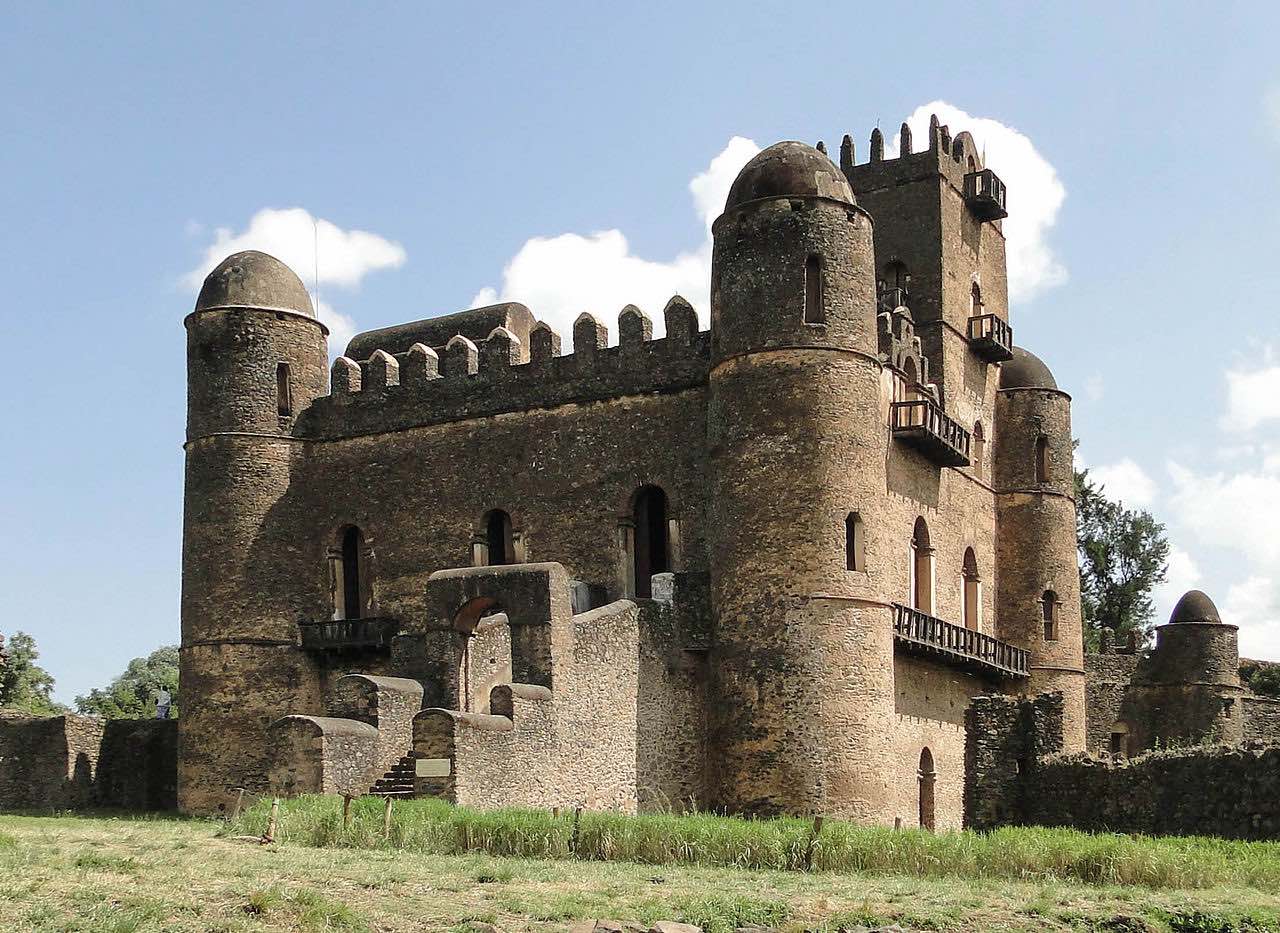 Wandering the enclosure and exploring the buildings makes for a pleasant morning or afternoon while January 19 sees Fasil’s Pool, a sunken bath in the grounds, become the focal point for Gondar’s spectacular celebrations for Timkat, the Ethiopian Orthodox equivalent to Epiphany.

Gondar also boasts some impressively frescoed churches such as Debre Birhan Selassie and it’s a good place to get a feel for the rich culture of the north, from the traditional dress to the music and dance. Try the cultural performances at the Four Sisters restaurant.

Ethiopia is home to around 70 per cent of Africa’s mountains and the Simien range is one of the most spectacular.

This lofty plateau peppered by peaks, deep gorges and sweeping valleys offers up epic scenery and excellent hiking, whether on multi-day treks with a tour company or short guided hikes from lodges such as the excellent, recently opened Limalimo.

More than 180 bird species call this area home, along with a staggering array of animals, including endemics such as the Gelada baboon, Walia Ibex and Ethiopian wolves — the World’s most endangered canid. Aim to visit outside the main rainy months of June to August.

Of the 30 chiselled-out cave churches secreted amongst Gheralta’s reddish rocky outcrops and tabletop mountains Abuna Yemata is my clear favourite.

The scramble up to the unassuming entrance of this still functioning church, hidden in a rock pillar some distance above the ground, culminates in a sketchy rope climb up a seven-metre rockface and some precarious shuffling along narrow ledges while local guides offer some well-needed encouragement.

Once inside the exertions are soon forgotten however as the obliging priest hands out candles to better observe the impressive frescoes. Exiting the church the sweeping views over the parched plains bring further reward — until you realise you have to repeat the earlier journey, this time in reverse.

The ‘Gateway to Hell’

From the northern town of Mek’ele multi-day guided tours strike out for the Danakil Depression, an impressively infernal slice of volcanic badlands. 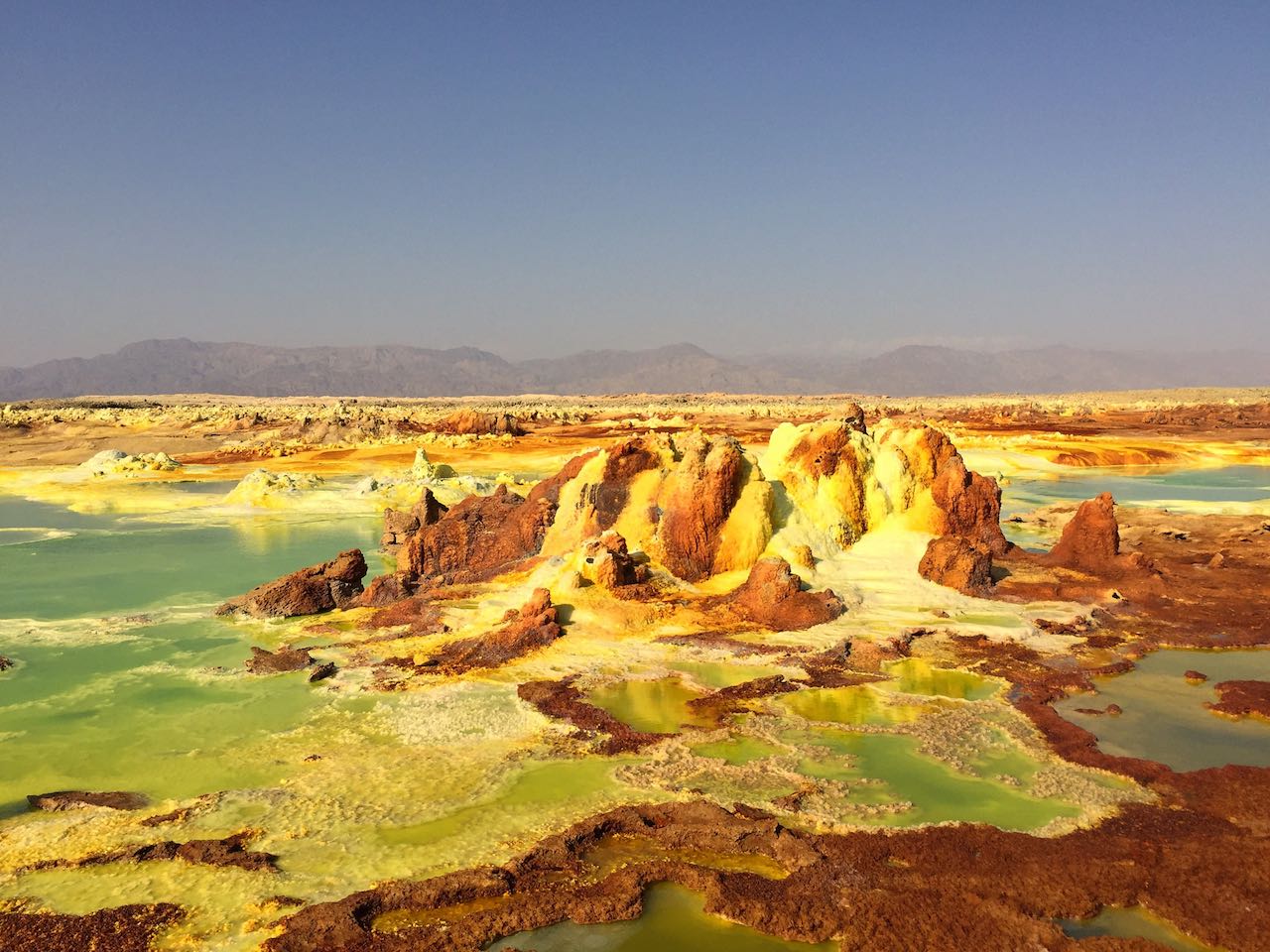 Much of the Danakil’s striking landscape lies more than 100 metres below sea level and the region regularly records some of the World’s hottest temperatures.

With its baked saltscapes, sulphur lakes and volcanos such as Erta Ale, whose crater nurtures a constant lake of lava, locals have dubbed the region ‘the gateway to Hell’. Conditions on tours are less than luxurious too but don’t let that put you off as the experience is unparalleled.

Laidback Lake Tana, Ethiopia’s largest lake and source of the Blue Nile, makes for a relaxing extension to an Historic Circuit tour.

Fishermen in traditional papyrus boats ply Tana’s waters while boat tours take in the many islands with their hidden thatched monasteries, known for their elaborate paintings and murals. As elsewhere in the country, however, many monasteries will not admit female visitors.

The surrounding Tana Basin is perfect for exploring on foot, tour or by hire bike. If aiming to visit the nearby Blue Nile Falls set your alarm for August and September when their cascades truly come into their own, swollen by the rainy season.

Out east towards Somalia the fascinating walled Muslim settlement of Harar makes a nice counterpoint to the Orthodox north.

Many call Harar’s insanely Instragrammable old town, established more than a thousand years ago, a ‘living museum’ although its inner tangle of streets, courtyard houses and mosques pulsates with life, the colourful vibrancy of the walls and spice market surpassed only by the striking outfits of the local female vendors. 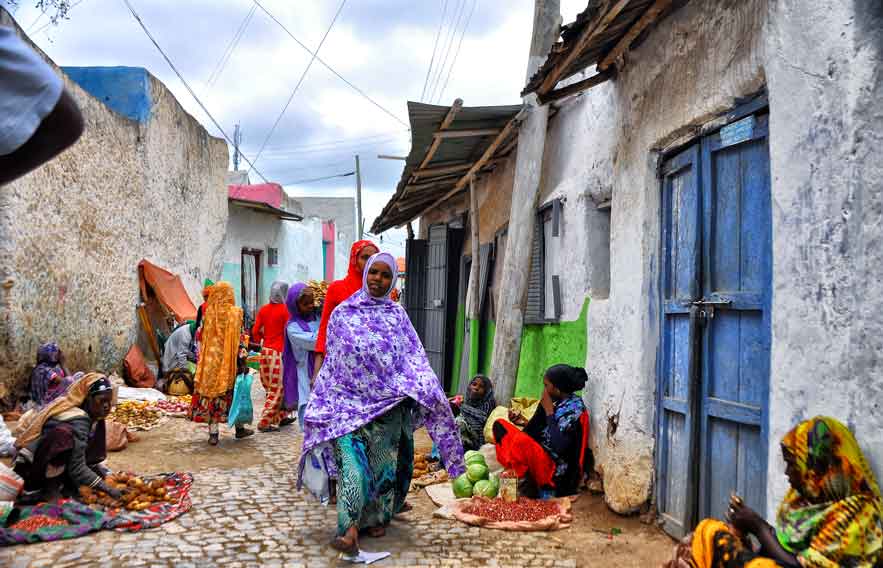 There’s an interesting museum dedicated to the life of the French poet Arthur Rimbaud, a former resident (entrance Birr 50), while nightfall sees many visitors take a tour, taxi or tuk tuk to watch the nightly feeding of the local hyena. You can also help the ‘hyena man’ feed the skittish beasts by proffering chunks of fresh meat draped on a short stick, although opting to clench said stick betwixt your teeth, as he sometimes does, won’t be for everyone.

Want to eat like a local? Then get your mitts on some injera. The spongy, slightly sour tasting flatbread, made of teff flour, makes a showing at most meals accompanied by one or more type of ‘wat’ such as shiro wat (a stew of chickpeas, beans or lentils).

Hearty specials see injera served with a selection of both wat and ‘tibs’ — small piles of sautéed meat or veg — with the diner tearing off sections of injera to scoop up the goodies. Injera even does a star turn at breakfast in ‘fir fir’ where chopped up rolls of the stuff are added to stew and then served on (you guessed it) another injera.

Classic Ethiopian ingredients include clarified butter (niter kibbeh) and berbere, a mix of chilli and spices, while other popular dishes include kitfo. This dish of raw or slightly warmed minced beef with spices and clarified butter is typically served with injera or the thicker flatbread, kocho, accompanied by ayib cheese.

The coffee ceremony forms one of the pillars of Ethiopian culture. Seated sellers roast the beans over a fire or stove before brewing up in ‘jebanna’ clay pots and serving in teeny cups, typically accompanied by a tasty side snack of kollo grains or popcorn.

Trying ‘Tej’ — a fermented sweet or dry honey wine served up at Tejbet (Tej houses) and the cultural nights held by establishments such as Yod Abyssinia in Addis Ababa — is a popular option. Then there are the great beers such as Habesha and local wines made by Awash and French firm Castel, with its Rift Valley and Acacia brands.

More acquired tastes worth a try include Araqe, the clear local firewater, and Tella, an unrefined beer-like homebrew made from millet or sorghum served in makeshift bars called Tellabet.

FLY: Ethiopian Airlines’ domestic network links Historic Route centres such as Gondar (or Gonder), Lalibela and Aksum with the capital Addis Ababa. The Simien Mountains National Park is a 70-mile drive from Gondar Airport while Mek’ele Airport is the jumping off point for both the cave churches of Gheralta and tours of the Danakil Depression.

For Lake Tana fly to Bahir Dar while Harar is a 90-minute drive from Dire Dawa, which has an airport and is a stop on the new Chinese-built railway linking Addis Ababa’s Furi-Lebu station to Djibouti.