Silent disco is taking over the streets of Liverpool 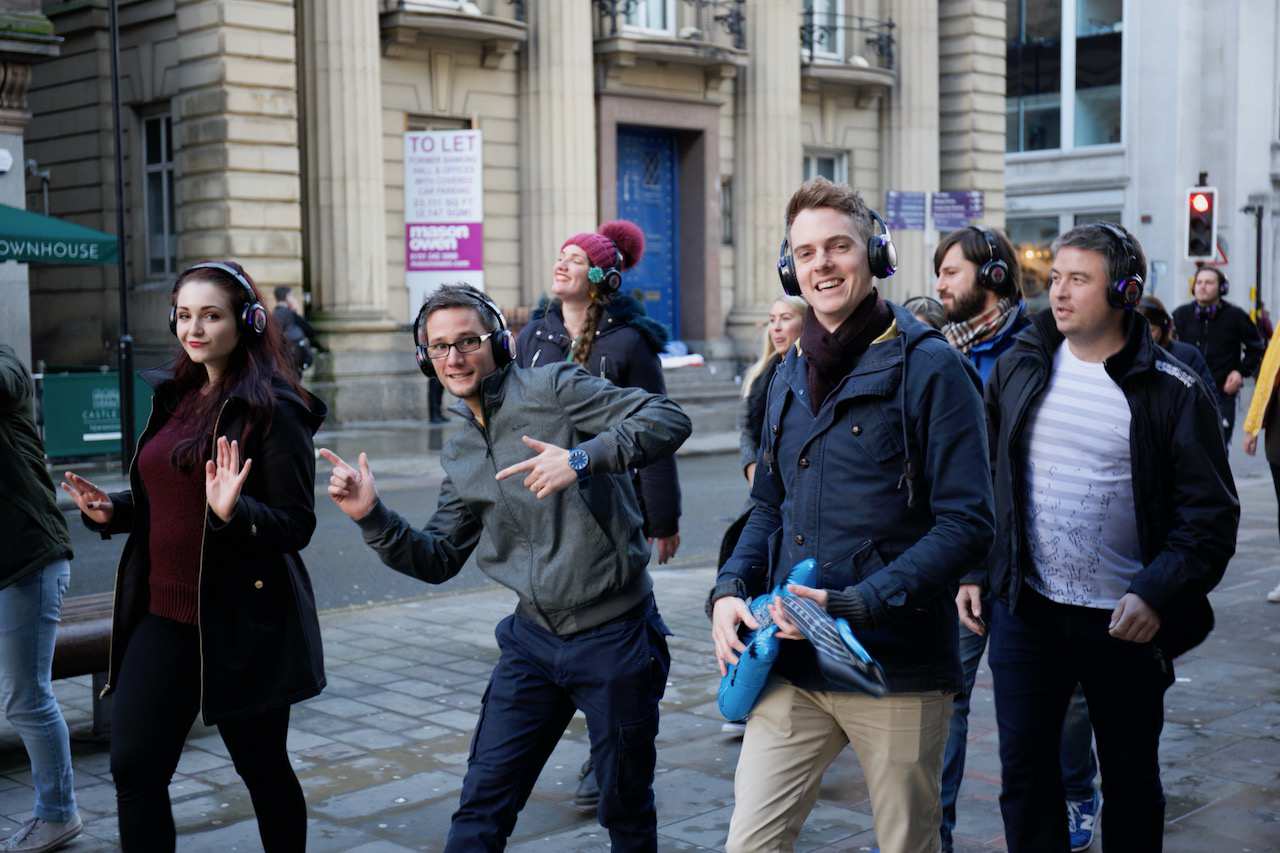 If you have ever walked in the streets with music blaring into your ears via headphone and had to stifle the urge to dance, then you may love Liverpool’s first Silent Disco tour with Silent Adventures Liverpool. It’s likely to make even the most miserly bore let go and boogie while exploring the city that produced the Beatles.

The idea is loosely based on the traditional impromptu silent discos (flashmobs) that seem to pop up usually at festivals by headphone wearing ravers. Onlookers just see people dancing in silence. It’s comical.

During this tour everyone in the group hears the same music and tour information as they walk around the city. 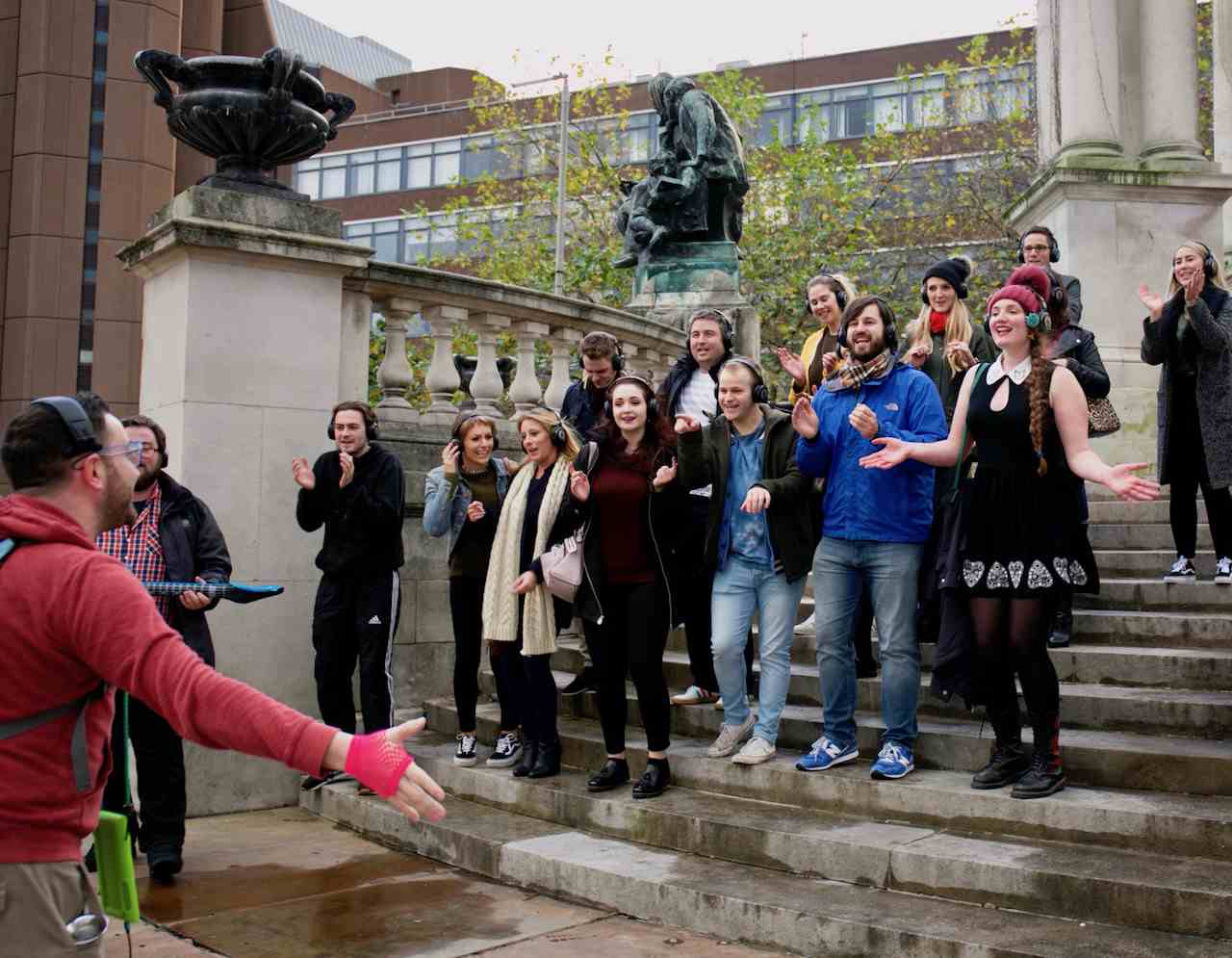 Silent Adventures have developed a special set of headphones that not only broadcast music, but also allow the tour guide to communicate with to groups of up to 30 via a microphone. Think a disco-meets-flashmob through the city, providing dance instructions and lots of witty banter.

I attended the tour as part of a 35th birthday bash. The meeting point was Tavern on the Green and we arrived with just enough time to fit in a quick pint before setting off at 3pm. We were each handed a pair of flashing headphones and a few lucky individuals were also given an inflatable guitar.

Chief disco bopper, Alan Cross gave us a few instructions on how to use the headphones and I was relieved to discover the tour was focused on singing and dancing, with the odd fun fact thrown in about Liverpool. Moments later we were off and our headphones came to life with some lively jazz music to get us in the mood. 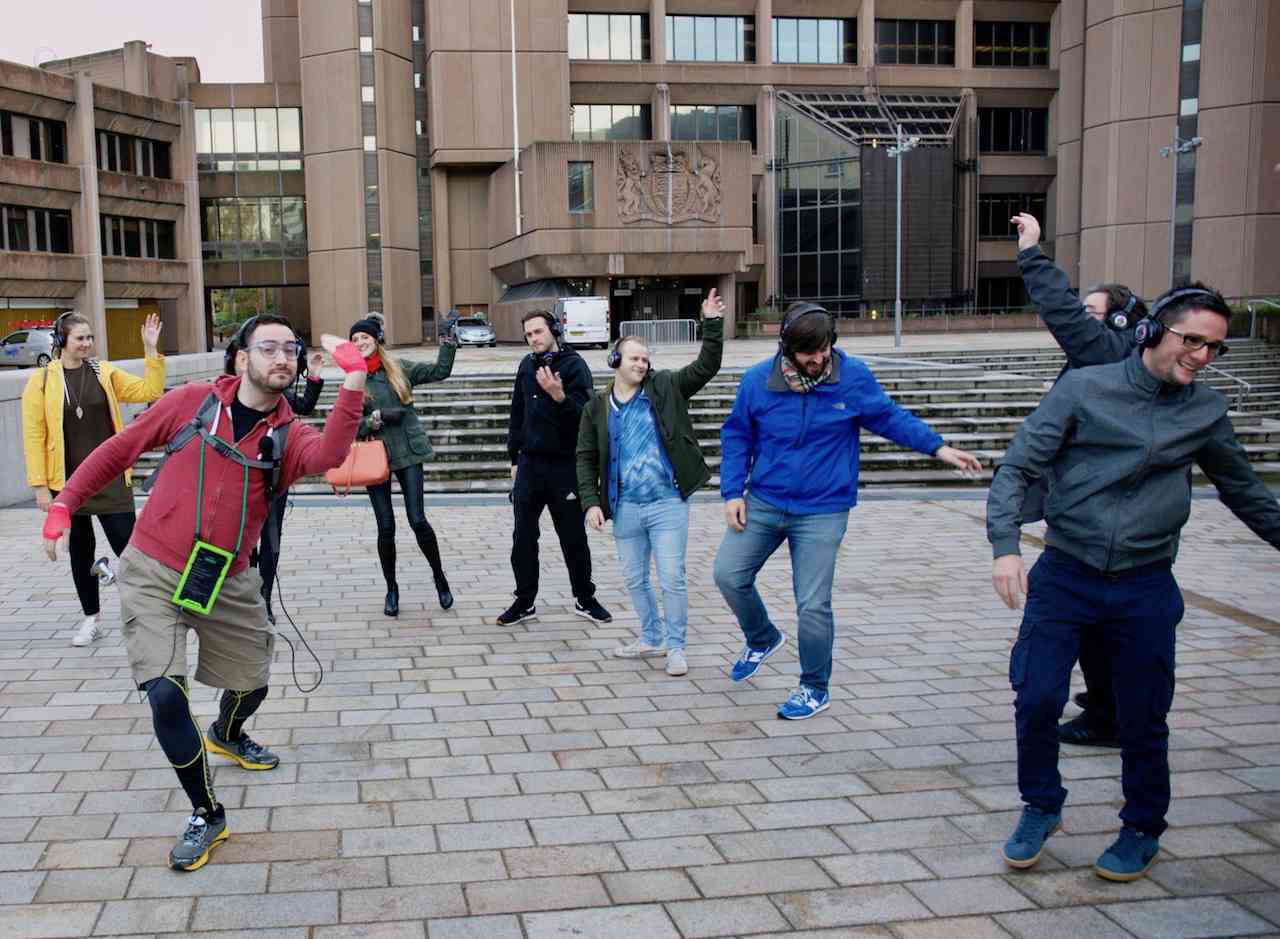 What followed was 50 minutes of pure, unbridled fun. Alan was eager to banish any shyness, and formed us into a circle at Derby Square (home of Liverpool Law Courts) with him in the centre. He performed a selection of classic dance moves for us to copy (the shopping cart, the sprinkler and the light bulb to name just a few) and even encouraged us to show off some of our own shapes.

Once everyone had loosened up, it was time to let go and sing loud and proud to the lucky shoppers of Liverpool city centre. We danced along Castle Street to Uptown Funk and accosted a human billboard on the high street while belting out Time of My Life. The singing came to a true crescendo during Bohemian Rhapsody while standing on the steps of the neo-Baroque Victoria Monument, assisted by some equally impressive air guitar moves. 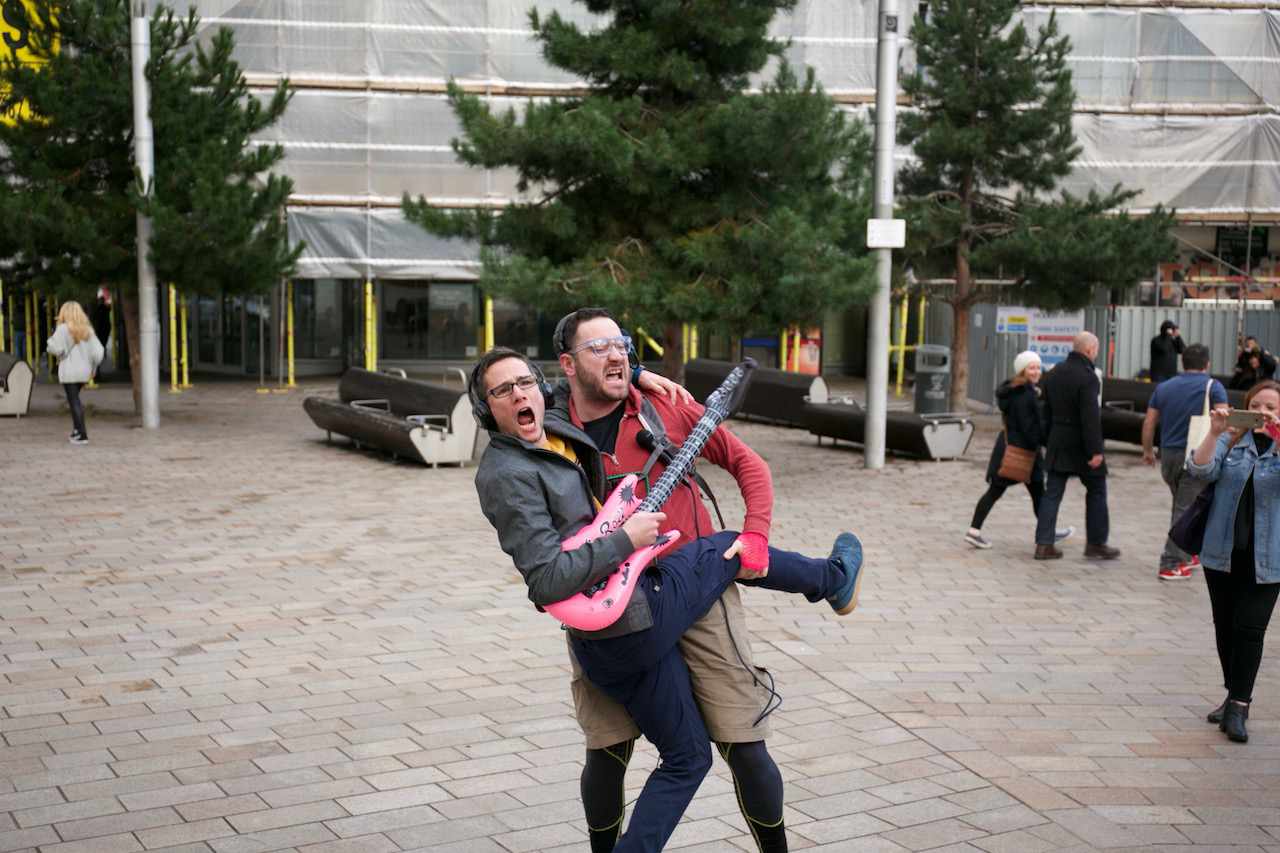 While strutting along the high street we managed to attract quite a crowd of eager onlookers. There were many high fives and a few baffled looks. Those enjoying their lunch in The Slug & Lettuce were particularly nonplussed when all 20 of us performed a jazz hands crab dance along the front of the restaurant.

And of course no tour of Liverpool is complete without a reference to the Beatles. We sung Love Me Do while walking past the Cavern Club, where the Beatles performed 292 times between 1960 and 1963. The hour ended with a rousing performance of Hey Jude as we made our way back to Tavern on the Green.

The tour was an absolute riot from start to finish. Song choices were generally on point, although I would have liked a little more 90s cheese. I just wish it had lasted longer – I would have quite happily spent another hour on the tour. I can’t wait to go again!

Silent Adventures Liverpool are currently running tours at 3pm every Saturday. Look out for the Christmas themed tours throughout December.

If you are in Liverpool on a visit, check out our review of Aloft Hotel Liverpool.