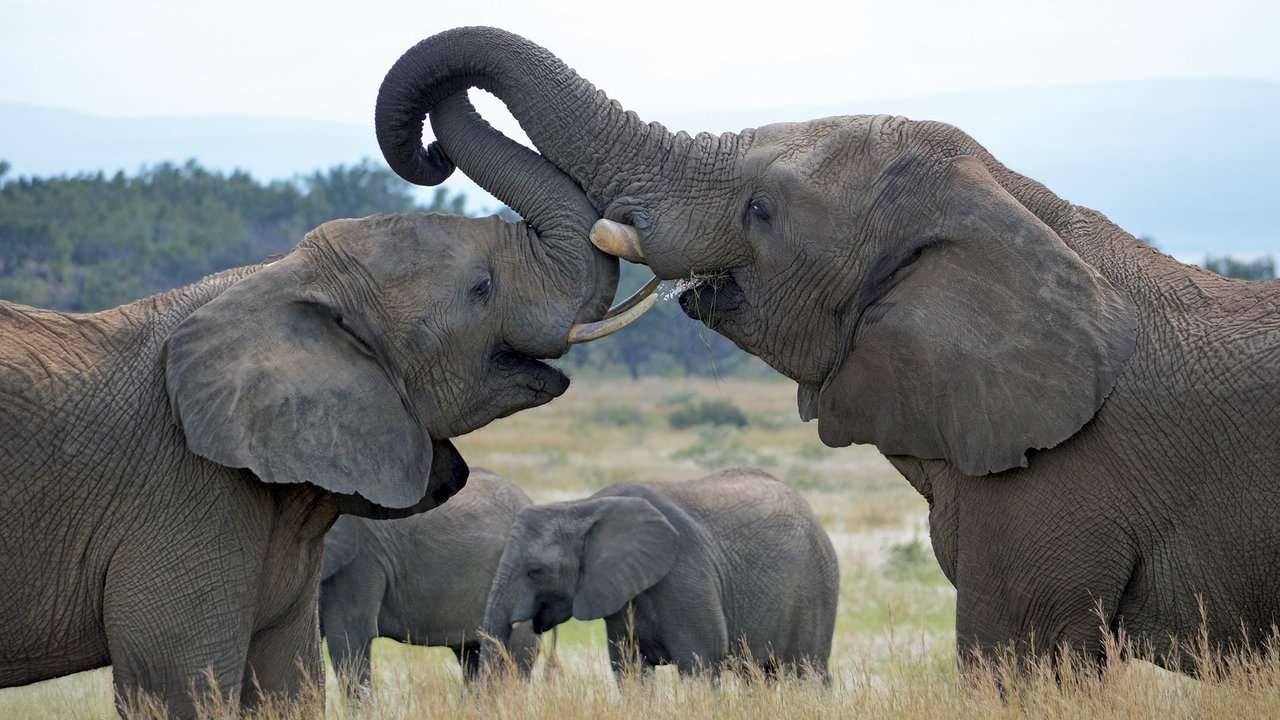 The nests of the brilliant yellow weaver birds which dangle from the trees near our table are things of intricate wonder, cosy spherical shelters against the world outside. When I go to bed that night in my honeycombed shaped chalet, built with traditional African materials but with beautifully appointed interiors, I fancy I could be a human version of the weaver bird. There’s the delicious sensation of sleeping in a luxury cocoon while listening to frogs croaking and baboons barking and other sounds of the wilderness.

Private game reserves like Zulu Camp at Shambala in the Limpopo province three hours north of Johannesburg offer guests who don’t want to rough it a great combination of high life and wild life. So we see plenty of game: almost as soon as we turn into the 12,000 hectare reserve there are wildebeest, warthogs, giraffe, two kinds of zebra and several kinds of antelope and on drives over the next couple of days we spot four out of the ‘big five’: elephant, lion, buffalo and rhino. Only the nocturnal and secretive leopard remains elusive. A sunset cruise brings us sightings of hippos and the chance to fish, unsuccessfully but enjoyably, from the side of the boat. 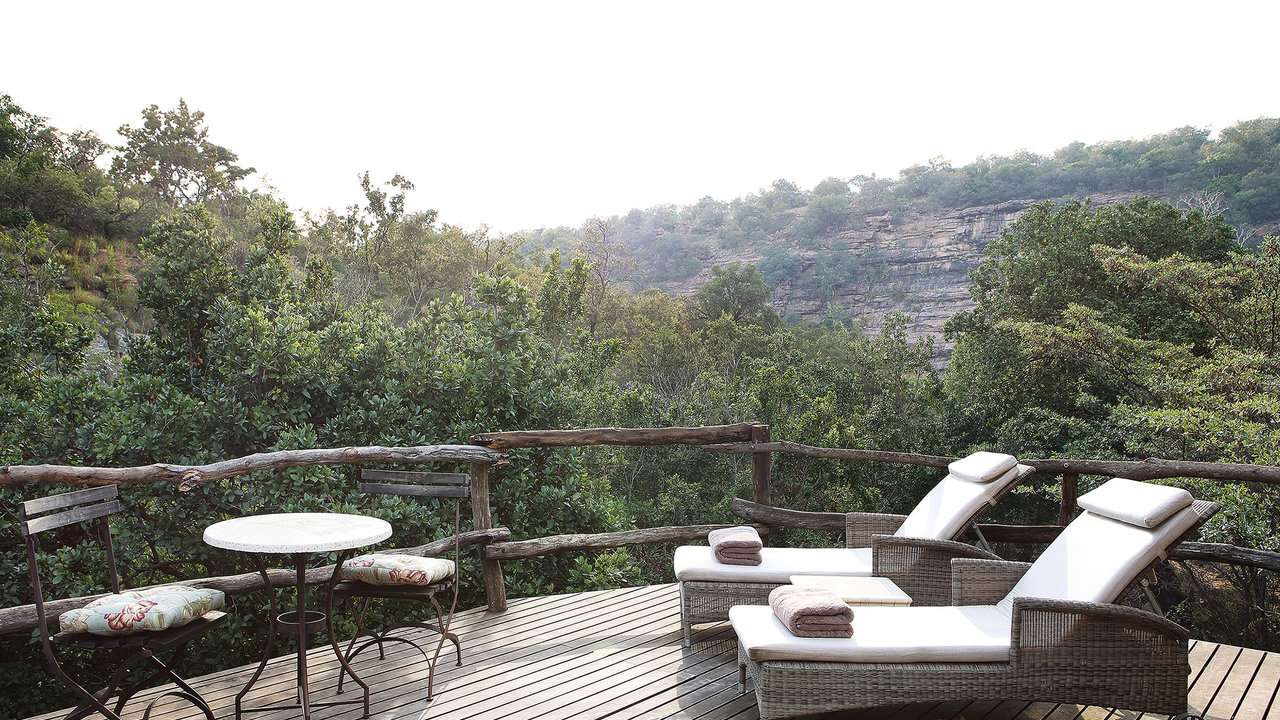 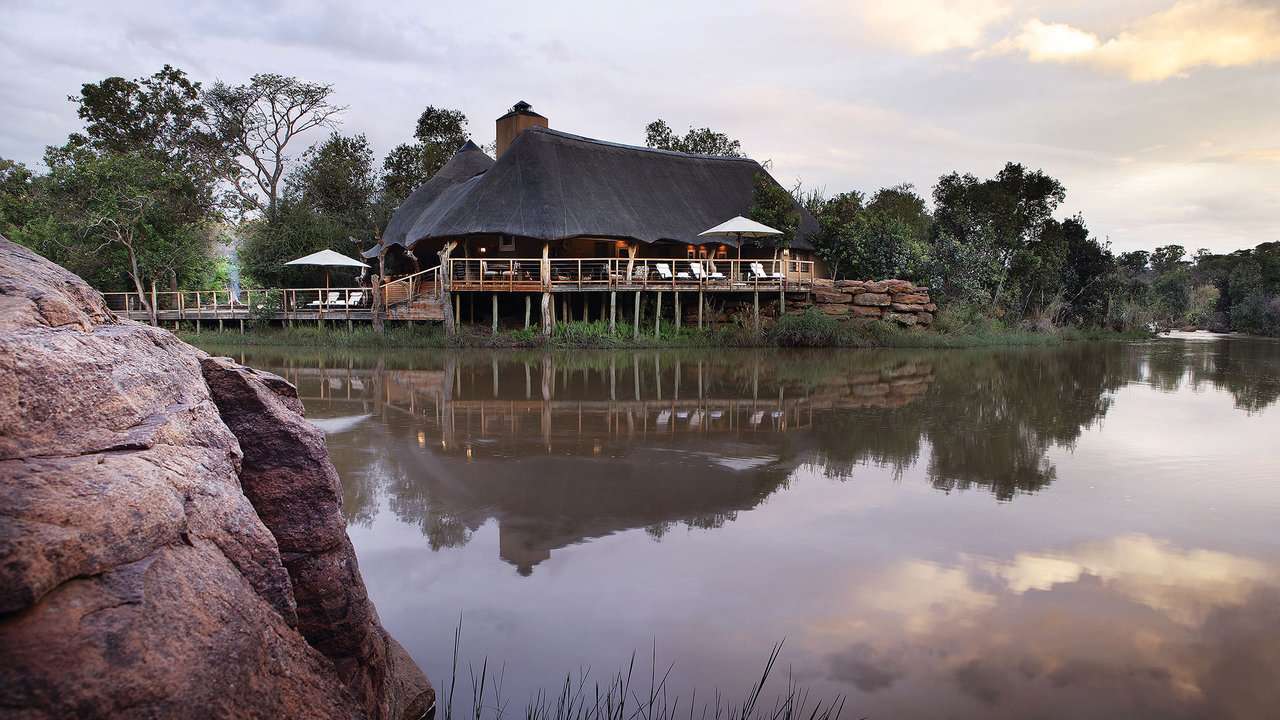 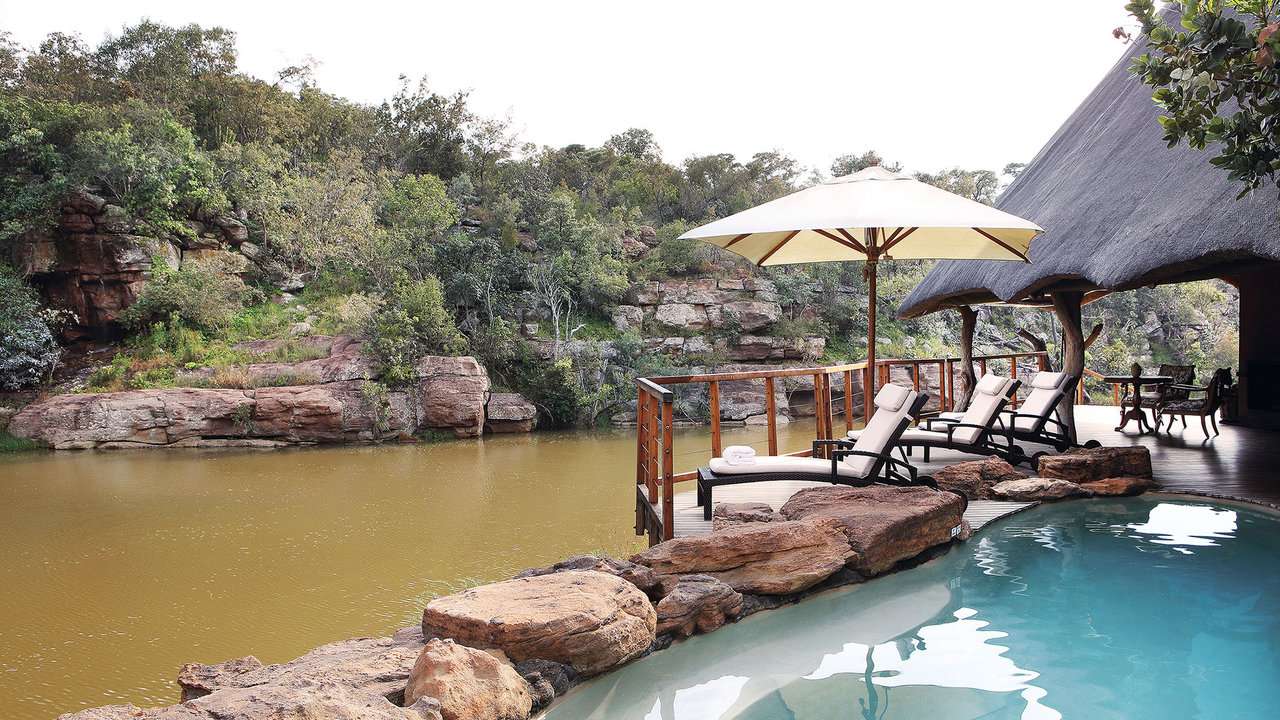 The cruise on the Steyn Dam built by the reserve’s owner Douw Steyn in 2001, however, is accompanied by champagne and nibbles and on another day we enjoy more bubbly and canapés at a waterside picnic. All our food is yummy but particularly memorable is the ‘boma’ evening where all kinds of mouth-watering meats are cooked over a huge fire pit including members of some of the species we’ve seen earlier: kudu antelope proves especially tasty. We’re also pampered in the spa with African inspired treatments: my massage, for instance, has elements of drumming and dancing rhythms and the oils include extracts of rooibos and baobab.

At the same time though there are always reminders that we are guests, not just of the reserve but of its untamed surroundings. We’re told, for example, always to shake out our shoes before putting them on in case a scorpion has slipped inside and warned on our elephant ride never to go near the babies, however enticingly cute. As our guide Simon wryly puts it: “the mothers don’t like it and I don’t like the paperwork.”

The ride is for me the highlight of the visit. It feels a great privilege to sit on these giant beasts in the early morning sunshine as they carry us across the bushveld with its sweeping views, with younger members of the herd, including the two babies, frolicking around alongside us. The adults were originally orphans from Zimbabwe and have been trained to be comfortable with and respond to humans.

As we amble along our mahout Mendoza regales us with fascinating elephant facts: the trunk, for instance, has 100,000 muscles in its trunk and the animal can eat 300 lbs of food a day. It’s certainly easy to believe the latter as ours snaffles up a small sapling as we might a breakfast muffin.

As we leave the reserve on our last day we visit the five star Saxon Hotel, a smart urban retreat in ten acres of gardens with 53 suites in the main house plus three private villas which can be reached directly from the underground car park. The hotel also has an impressive collection of more than 250 pieces of African art including sculptures, paintings and installations. Previous guests have included Bill Clinton, Kevin Spacey and Oprah Winfrey. 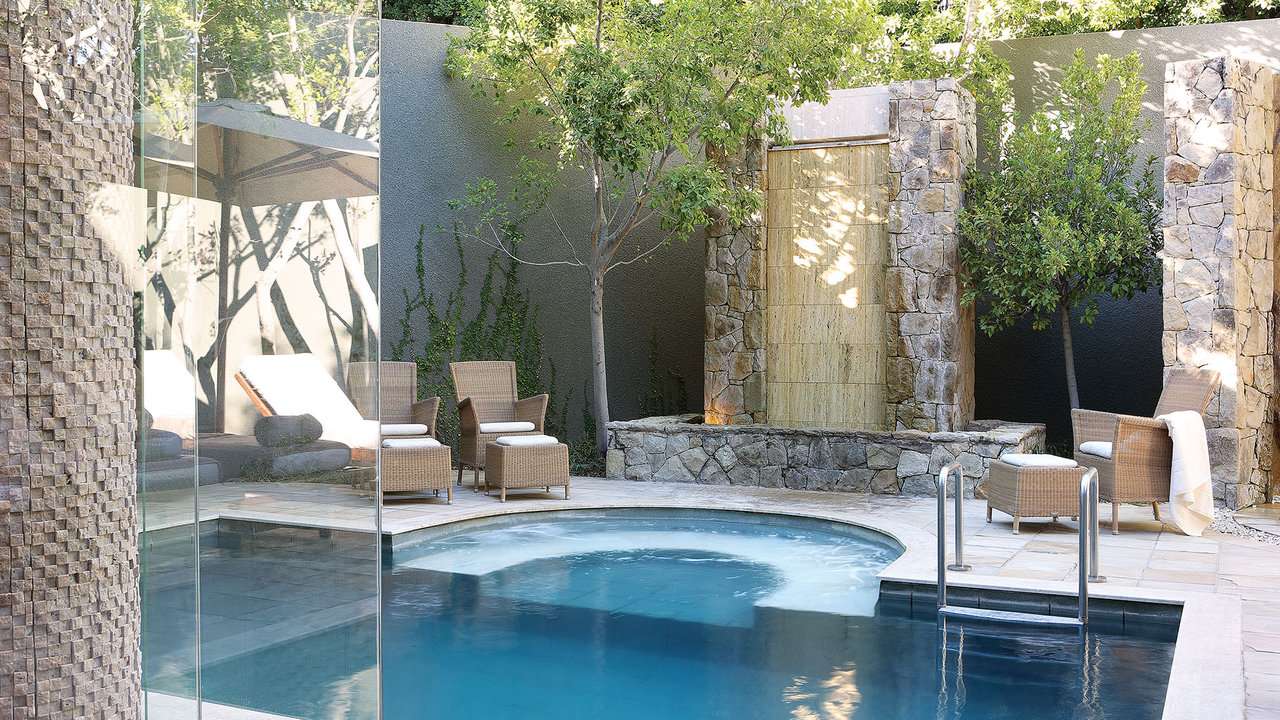 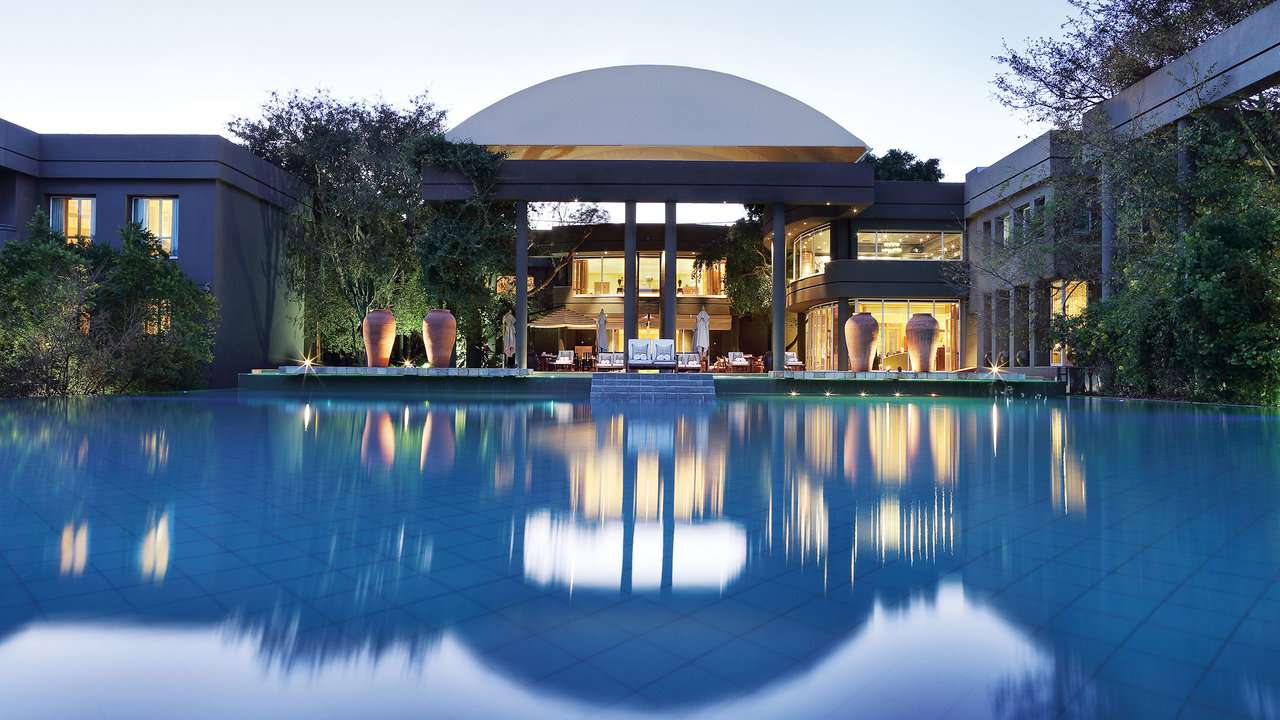 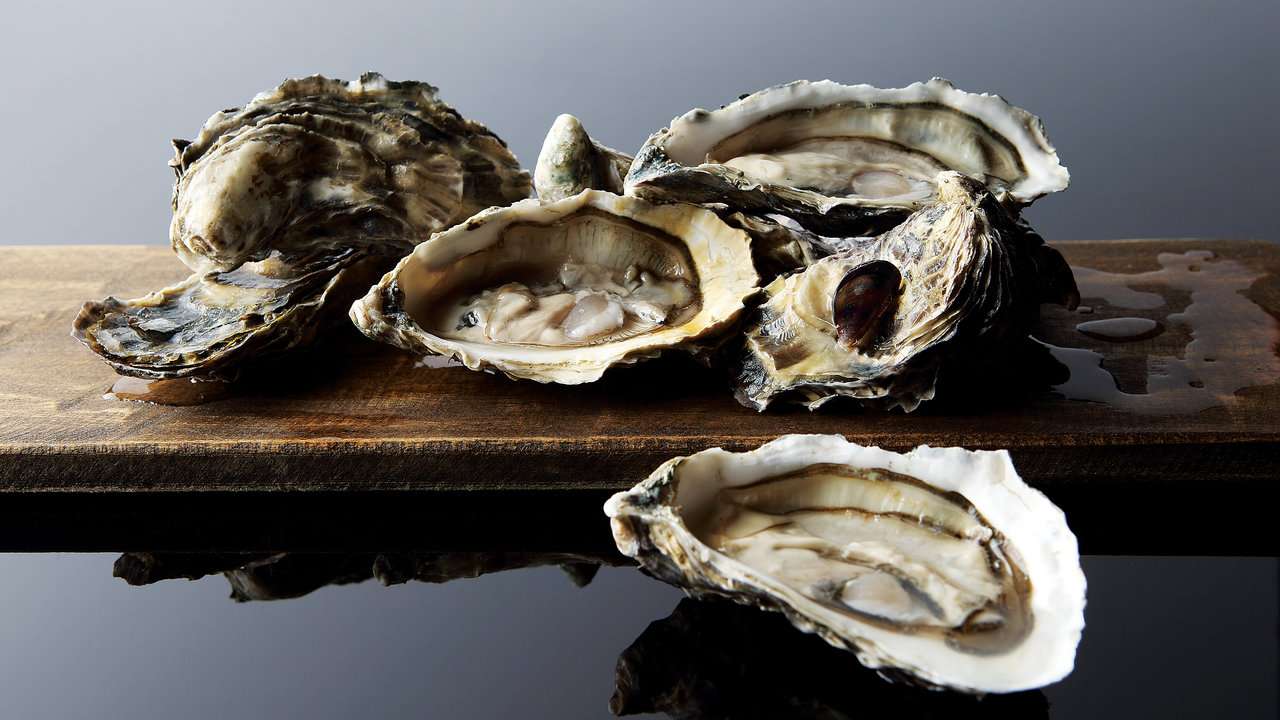 The Saxon is in tranquil, leafy Sandhurst, one of the city’s most prosperous areas which are often only a stone’s throw from some of its roughest. On our chauffeured tour from the Saxon Hotel, for example, we stop in the lovely avenues of Houghton to peek at the residences where Mandela lived as president and then privately in retirement: he picked the area as a symbol of the new integrated Rainbow Nation – under apartheid blacks would not even have been allowed to walk there.

We then cross one main road to take us through Hillbrow – still an area riddled with crime and gang warfare, a reminder, says our guide Lucky, of the bad old days – and on to the impressive Constitutional Court with its gestures both to the past – some of the bricks are from the old prison – and to the future with its lettering in 11 languages and its fabulous collection of African art.

In the afternoon we head to Soweto, once a name synonymous with the oppression and injustice of apartheid, now a city of two million with a burgeoning middle class and a growing tourism industry. Visitors are drawn to sombre reminders like the memorial to Hector Pieterson, the schoolboy killed in the Soweto uprising, and to the vitality of Vilikazi street, the only one on the world to house two Nobel Peace prize winners. It was Bishop Desmond Tutu’s home as well as Mandela’s. 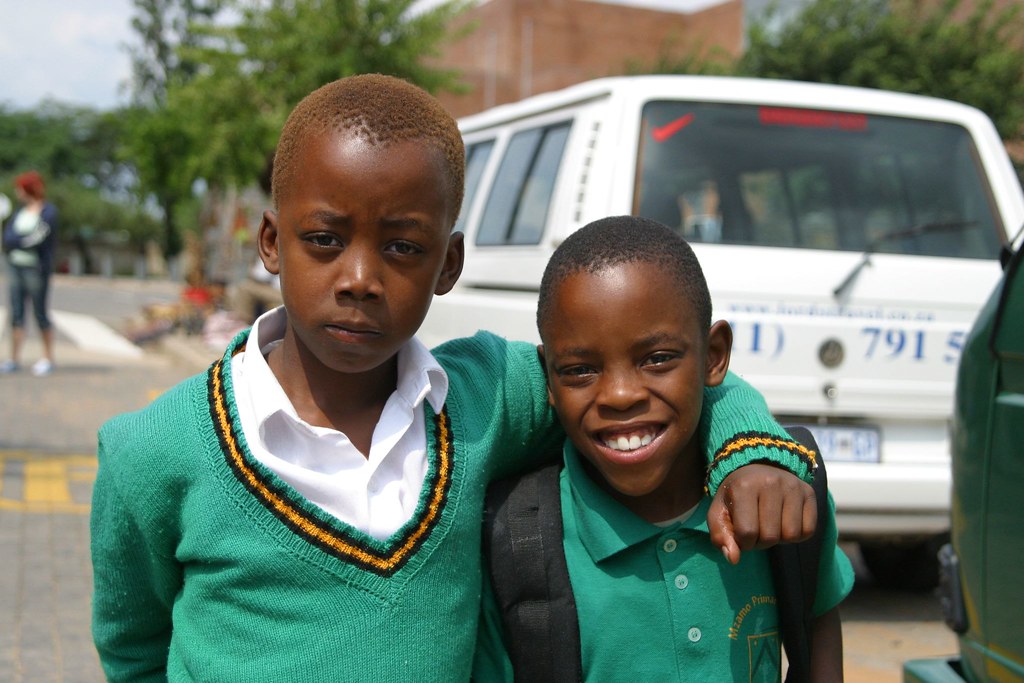 But there are still great swathes of shocking poverty. Don’t locals mind people gawping at their corrugated iron shacks and pitiful possessions, I ask Lucky. No, he insists, they know we’re bringing money in.

Johannesburg’s regeneration is far from complete and one cannot one ignore the fact that many places bristle with security: razor wire topped fences, gated communities and armed guards but nonetheless there have been extraordinary changes in the past few years.

The clean up began with an key decision at an inner city summit to create affordable downtown living space for young people and families. The idea was that if they no longer had to travel in from the townships to work they would have more disposable income which would in turn boost retail and food and drink outlets. Public spaces would be spruced up with better lighting, tree and shrub planting and attractive street furniture. Private investment by individual entrepreneurs has also transformed once down-at-heel, unsafe districts into places with attractive apartments, art galleries, cool cafes and trendy restaurants.

The rebirth could be symbolised by the beautiful Leaping Impala sculpture which stands outside the headquarters of the Anglo American company. Donated by the Oppenheimer family in 1960 it was originally set up in the park named after the company’s founder Sir Ernest Oppenheimer where it could be gazed upon by the rich and fashionable as they took their ease on benches marked Whites Only. When the city collapsed into chaos in the 1990s it was vandalised, the heads chopped off and sold for scrap. Today though it has been restored – the heads recreated by the original sculptor Herman Wald’s son Michael – and given pride of place in the tree-lined pedestrianised Main Street, the heart of the financial district.

We have heard the story on a walking tour which has also taken us past the office where Nelson Mandela and Oliver Tambo became the country’s first black lawyers and which is now a ‘sidewalk museum’ with window displays telling the story of the anti-apartheid struggle; the replica mineshaft head, a reminder of the gold on which the city was founded; the Rand Club where Kipling first recited If; and Gandhi Square with its statue of the man who was later to lead the fight for India’s independence.

The tour is fascinating in its own right. Our guide Gerald Garner is brilliant on Johannesburg’s history: the gold rush, the extraordinary boom town expansion (the population grew from a few farmers in 1886 to 80,000 within eight years), the British colonisation, the Boer War, the imposition of apartheid, the imprisonment and freeing of Mandela and the more recent fall and rebirth of the city. But what is as interesting as the content is the fact that the tour is taking place at all.

For as Garner says “I couldn’t have done it even five years ago: this was a dirty and dangerous place but it has turned itself around. And word is spreading that it is a destination in its own right. Last year we had three million international visitors. This is now a city of possibilities.”

Two nights at Saxon Hotel, Villas and Spa (including buffet breakfast) and three nights at Zulu Camp, Shambala (including one morning and one evening game drive per day, local alcoholic beverages and all meals), plus transfers from around £1950 per person low season to £2400 high season.

Walking tours from around £20 per person.