It is not hard to be won over by the charms of St Lucia, known as the jewel of the Caribbean. 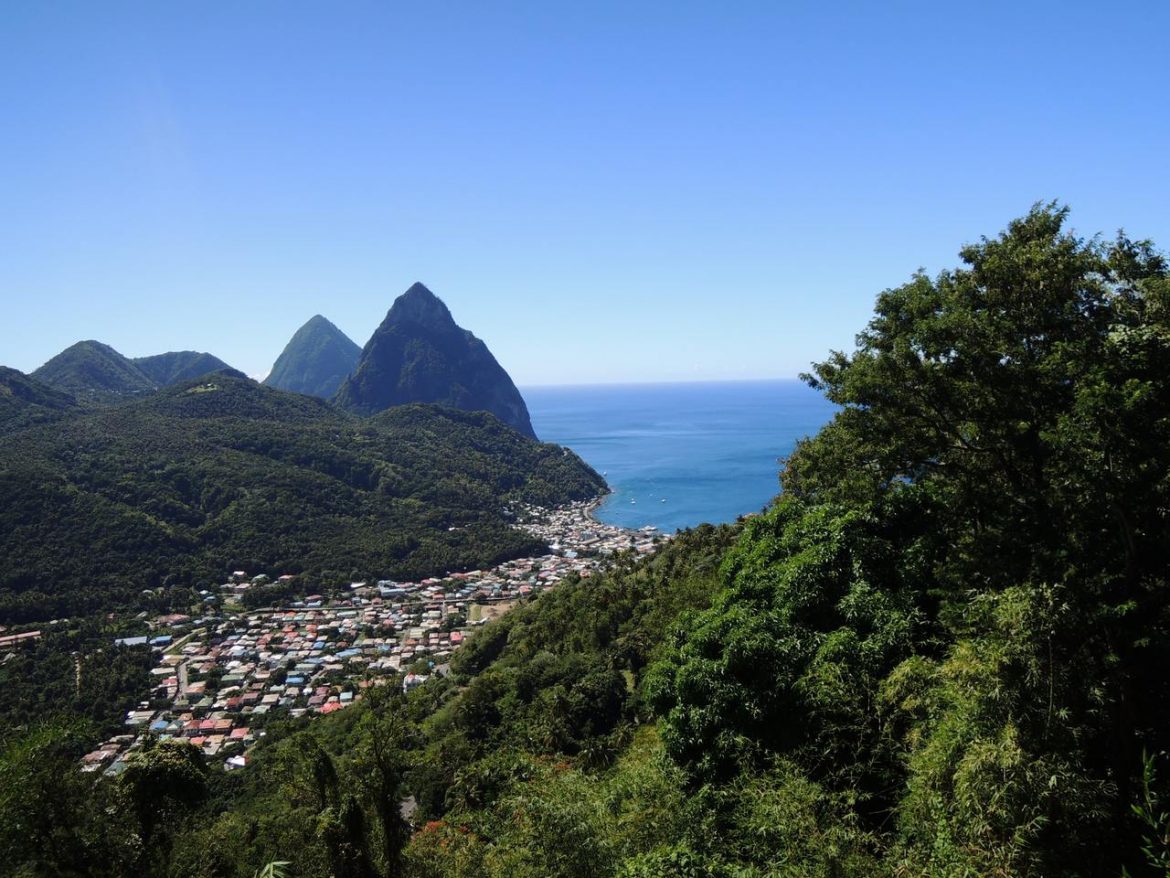 On arriving at St Lucia’s airport Hewanorra International Airport (UVF) in Vieux Fort located 40 miles south of the lush capital Castries, everyone is handed a wristband which bears the motto: “St Lucia – let her inspire you.” Frankly, it is not hard to be won over by the island’s charms as St Lucia stands out from the crowd in the West Indies and represents the very best of the Caribbean: it is welcoming, winning and wondrously beautiful.

The island, which has a resident population of just 180,000, plays host to a million visitors every year (many of whom are British). Two-thirds of St Lucia’s income comes from tourism, and it doesn’t take long to understand why so many tourists flock there every year.

It boasts breath-taking, mountainous scenery and so you can see why this island, which has been dubbed “the Jewel of the Caribbean,” has been chosen as the stunning backdrop for everything from Superman 2 and Dr Dolittle to Inspector Gadget 2 and The American Bachelor.

Here are the top five sites that will help you to be seduced by St Lucia. 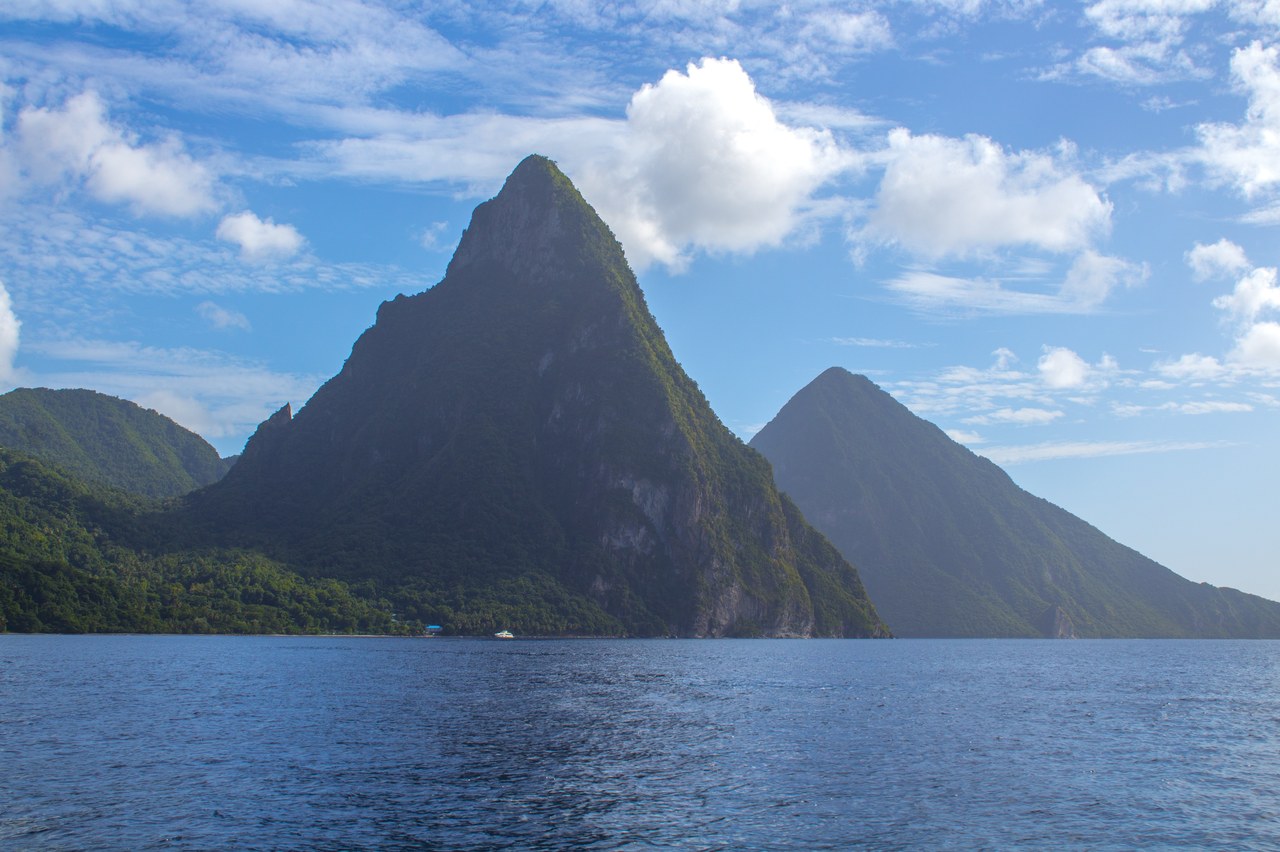 The majestic Pitons Image by mimi_s from Pixabay

These majestic twin peaks feature on every tourist poster of St Lucia ever printed. The local brewery has even named its most popular beer after them.

A million years ago, these two magnificent mountains erupted out of the Caribbean Sea through tectonic plates off the southwest coast of the island. In 2004, they were designated a UNESCO World Heritage Site.

You can take a boat tour and see the Pitons up close and personal from the sea. Should your budget stretch that far, you can even circle them in a helicopter.

If you’re feeling particularly hearty, you can scale the 798.25m Gros Piton. It is a challenging climb, which can take up to six hours, and is only really suitable for the physically fit. But it is well worth the effort for the ravishing vista from the summit.

Alternatively, you could happily spend the whole day on a nearby beach entranced by the light changing on the peaks. With a glass of Piton beer in your hand. 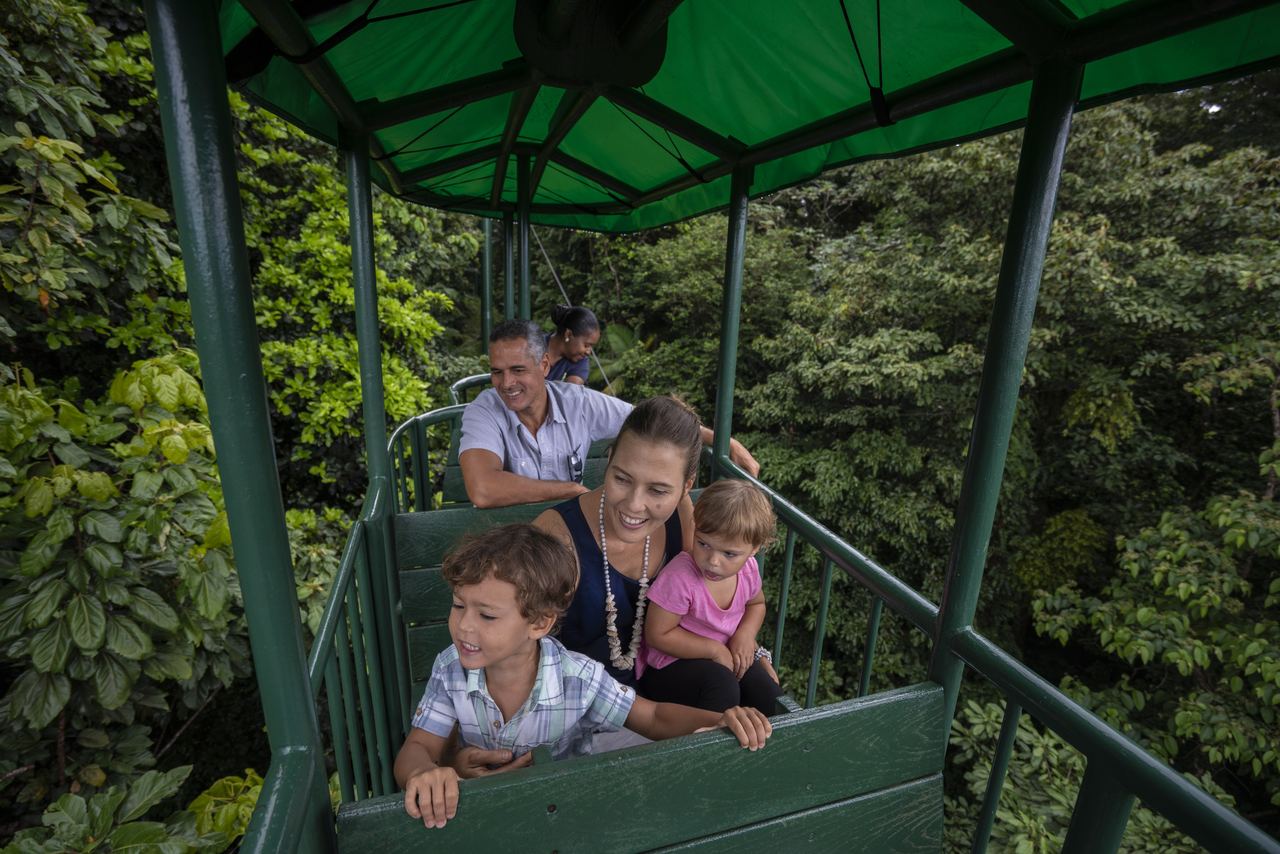 Unleash your inner Tarzan on this splendid tram ride high above the canopy of the rainforest near the island’s capital of Castries.

On a memorable 800m long gondola trip through the jungle, the cable car travels to a height of 1400 m above sea level, from where you can enjoy a magnificent view of the west coast of St Lucia.

From 140 m above ground, you get a strong sense of the indomitable fertility of the rainforest. You can imagine that if you abandoned a rusty old banger in the undergrowth, the jungle would have consumed it within a matter of days.

The expert guide accompanying you in the tram encourages you to look for unusual animals such as the agouti. This cute-looking rodent has extremely short legs, which means its only method of getting downhill is by rolling.

The agouti is also said to be rather dim. It plants nuts in the ground and is surprised when it returns a year later to find trees in their place.

The tram ride was all the more pleasant because we did not catch sight of the rainforest’s scariest resident: the boa constrictor.

For a century and a half, St Lucia was invaded on 14 different occasions – seven times by the French and seven by the British.

During one of the periods of British rule, between 1779 and 1782, Admiral George Rodney commandeered Pigeon Island on the north east coast of St Lucia, once the lair of the feared 16th century French pirate, François le Clerc.

Here Rodney constructed a fortress so he could spy on the French on the island of Martinique 21 miles to the north. The fort still stands in a commanding position on Pigeon Island, complete with three 24-pounder cannons inscribed with “GR” (in honour of the then reigning monarch George III).

With a modesty characteristic of the era, the admiral called it Fort Rodney. To gain an unimpeded view of the enemy across the water, he demanded that all the trees on Pigeon Island be cut down.

The sparse, treeless 44-acre island is now a National Park, and a marvellous place to see the surrounding islands, including, of course, Martinique. It is also home to the wonderful annual St Lucia Jazz Festival. 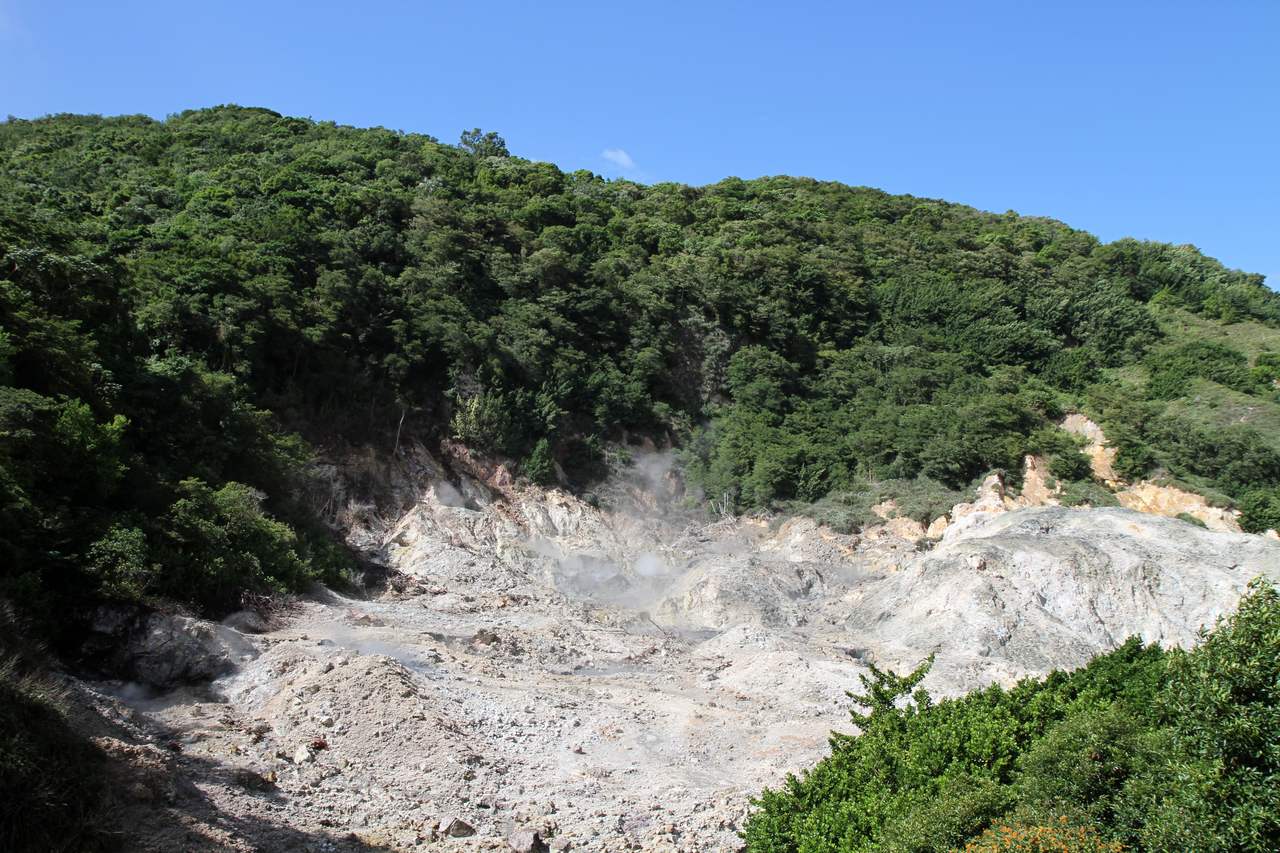 Billed as the only drive-through volcano in the Caribbean, this is a must-see destination. It is the hottest and most active geothermal area in the Lesser Antilles – and not something you are likely to witness elsewhere.

Ignoring the pervasive smell of rotten eggs, you can tour around the edge of the volcanic crater in the middle of the 44-hectare Sulphur Springs Park near Soufrière.

The boiling cauldron is peppered with bubbling volcanic pools filled with water that can reach temperatures of up to 172 degrees.

There has not been a major volcanic eruption here since 1766, but our guide, Samantha, warns us nevertheless to be on our guard.

“Let Mother Nature do her thing. Don’t trouble her. She’s in charge, and you have to respect her. She’s got the power. There is nothing we can do but obey and listen to her. If she decides to rumble, we’ve got to run!”

If you fancy it, you can also take a natural hot tub in the sulphurous mud baths near the cauldron. But like me, you may end up looking like The Monster From The Deep! 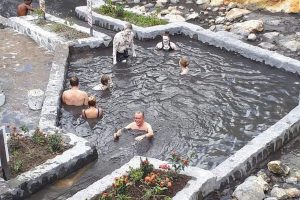 TAKE A TOUR: Saint Lucia Sulphur Springs Rejuvenating Mud Bath Tour incl. Castries, Canaries, Pitons – Cost: £100.55 per person
Enjoy a relaxing day in St. Lucia on a scenic journey through the west coast of the island, with a stop at the Sulphur Springs. This private excursion takes you past various landmarks such as the town of Castries, Canaries, and the Pitons. Drive through a volcano to reach the springs and enjoy a rejuvenating mud bath before heading to Toraille Waterfall for a refreshing dip. Snacks and lunch included. CHECK AVAILABILITY

The birdlife of Saint Lucia is colourful and captivating. There are hummingbirds wherever you turn, and the air thrums with the flapping wings of other felicitously named birds such as the shining cowbird, the ruddy turnstone, the grey trembler and – wait for it – the bananaquit.

The birds offer great drama. For instance, as we watch the sunset over the Caribbean Sea one evening, we espy a Brown Booby as it swoops down and snatches a fish. It is soon being ruthlessly pursued by its nemesis, the infuriating and hilariously named Magnificent Frigatebird.

Known as “the pirate of the sea”, this ruthless bully’s standard play is to chase the Brown Booby after it has caught a fish and then blatantly steal food from its mouth or intimidate it into coughing it up.

The Magnificent Frigatebird’s excuse is that it cannot fish for itself because its wings are so big that if it dived into the sea, it would drown.

The Booby acquired its name because it had a reputation for being gullible and easy to fool. It certainly never sees the Magnificent Frigatebird coming. 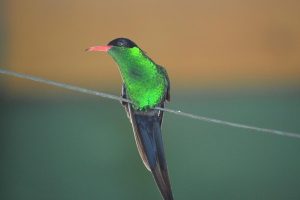 TAKE THE TOUR: Bird watching tour in St Lucia
Cost: £55 per person
Go in search of local birds such as rufous-throated solitaires, St. Lucia pewees, orioles, and banana quits during this morning birding tour. A professional guide offers tips and teaches you about native birds

East Winds Hotel This charming traditional St Lucian hotel comprises 26 cottage suites dotted around a lovely tropical garden that boasts inviting hammocks at strategic points. East Winds is also notable for its splendid birdlife. Each cottage has a jar of honey hanging outside which attracts the gorgeous local hummingbirds.

The Government of Saint Lucia has updated the entry requirements as follows: