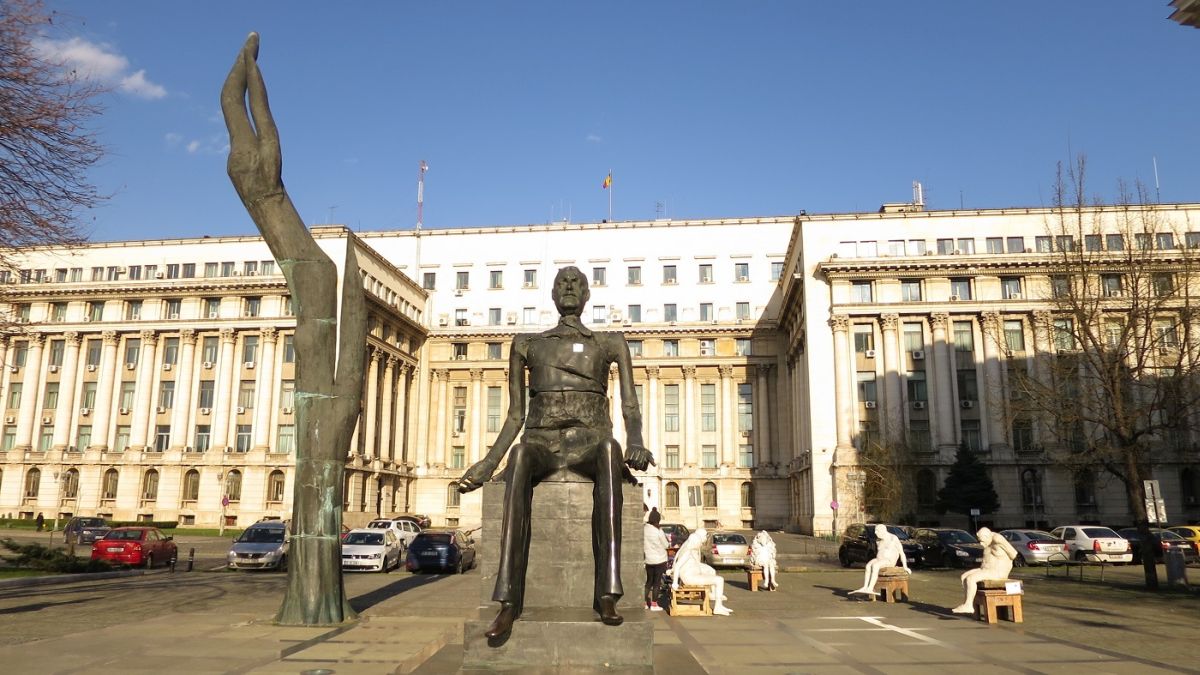 Once known for its dilapidated buildings and stray dogs the Romanian capital has been undergoing a major facelift in recent years and both are disappearing. Instead, belle epoque and neo-classical buildings glisten in the sun hemming the wide, sometimes tree-lined boulevards. Modern buildings straddle the freshwater Dâmbovița river that’s so clean locals go fishing there. And just as you begin to feel it’s all a tad reminiscent of Paris, a jumble of ancient orthodox churches, monumental parks as well as some visually jarring, communist era box-like towers turn up in the mix. The latter are not pretty but then again, it is part of the overall joy of discovering a new city. 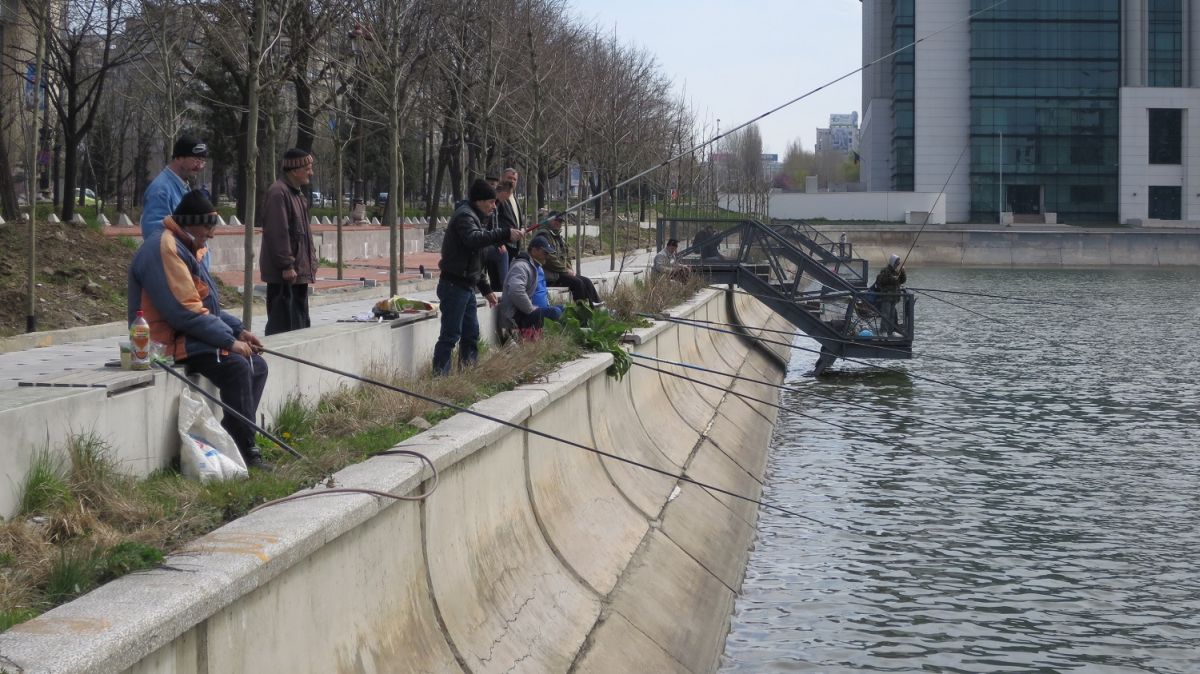 Dâmbovița River is so clean locals go fishing there

Seemingly rising into the sky the Intercontinental Hotel and its 25 floors and 283 rooms (all with a view) lords it over the city centre. Close to all the main sights and shopping districts it’s central location next to the National Theatre and University Square is a bonus.


Must Spot the Look-a-Likes

Everyone knows the iconic Arc de Triomphe in Paris. Bucharest has one too – Arcul de Triumf. It was built 1922 to commemorate the Romanian soldiers who died in World War I and is used by the army as the focal point for their annual parade. It is 85 feet high and if you climb to the top you get an lovely eyeful of the city.

In fact you may get the feeling at times of being in the French capital. That’s because some of the avenues in the city centre were designed by Haussmann, the architect who built Paris. And he recreated the avenues in Bucharest in the same way, but on a smaller scale. In particular Boulevard Unirii or Unifcation Boulevard is a wide boulevard connecting lba Iulia Square with Constitution Square passing  through Unification Square. and ending  at Palace of the Parliament and has some of the elegance of the Champs Elysee in Paris.

If you head for to the north of the City look out for House of Press. It was built in the “Stalinist Gothic” Style, resembling the seven towers (called Seven Sisters) of Moscow.

The Palace of the Parliament 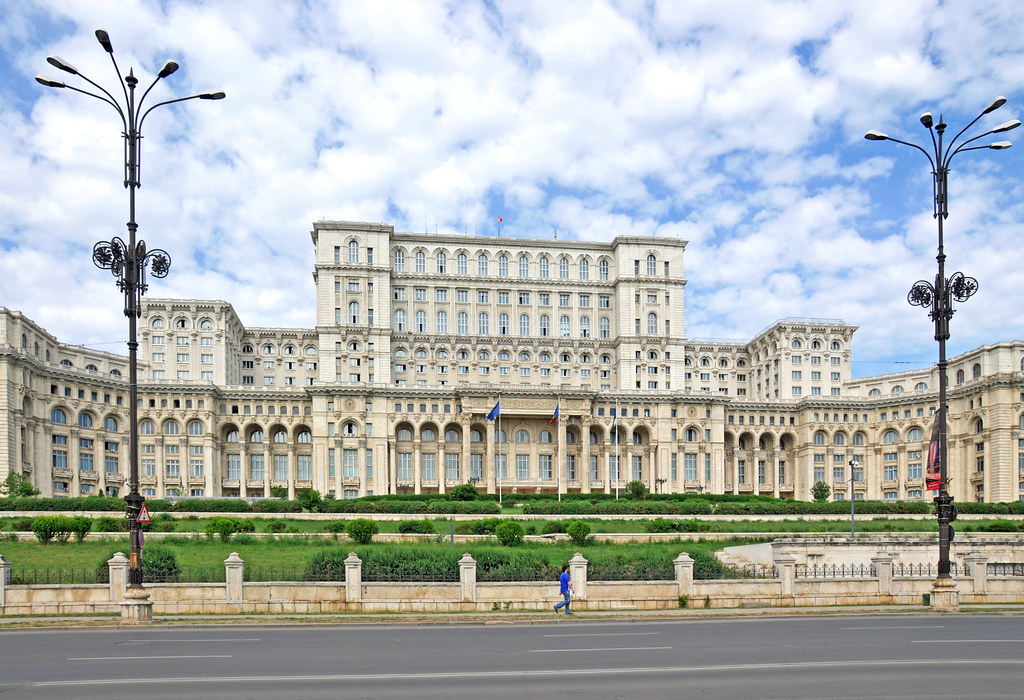 The Palace of the Parliament, Bucharest (c) flickr/Dennis Jarvis

This was built by Nicolae Ceaușescu – he called it the People’s House. Then it was a powerful symbol of socialism. Today this magnificent structure houses the parliament and is considered a symbol of democracy. It is the world’s second largest building (there are 1,000 rooms) the largest being the Pentagon which is only marginally bigger. Ceausescu had a penchant for huge buildings and when he ordered the construction of this one wiped out huge swathes of existing buildings in one swoop.

It took years to finish, but it is quite stunning inside and there’s plenty  to see, however getting in is no easy matter. Security is as tight and the measures used are similar to that in the airport- you need to have your passport or ID card with you and your belongings pass through a security scanner. On a busy day, entry could take a long time.

However once you get to the roof terrace you get a 360 degree view over Bucharest and that is worth the effort. Standard tour including access to the terrace costs 35 lei.

During his reign Ceausescu had the habit of demolishing buildings to build bigger and better ones. So it’s just as well that Village Museum in Herastrau Park was created. It is one of the first open air ethnographic museums in the world and contains 272 peasant farms and houses from all over Romania to be preserved for posterity. You will see 18th century Buzau houses to churches, windmills and even haylofts. Allow a few hours.

Located at Bulevardul Geniului, nr. 1, this was commissioned by King, Carol I, and since 1991 has been the official residence of the Romanian President. Previously it had been used as a monasatry and a royal abode. Inside are flamboyant marble staircases, rooms in various styles of decor and high ceilings with exceptional chandeliers. Part of the building is home to the National Cotroceni Museum and if you wish to visit, remember to take your passport.

The old town centre, known as Lipscani,  is a little schizophrenic when it comes to its architecture. Newly renovated buildings sit cheek to jowel with dilapidated buildings creating a before-and-after look. 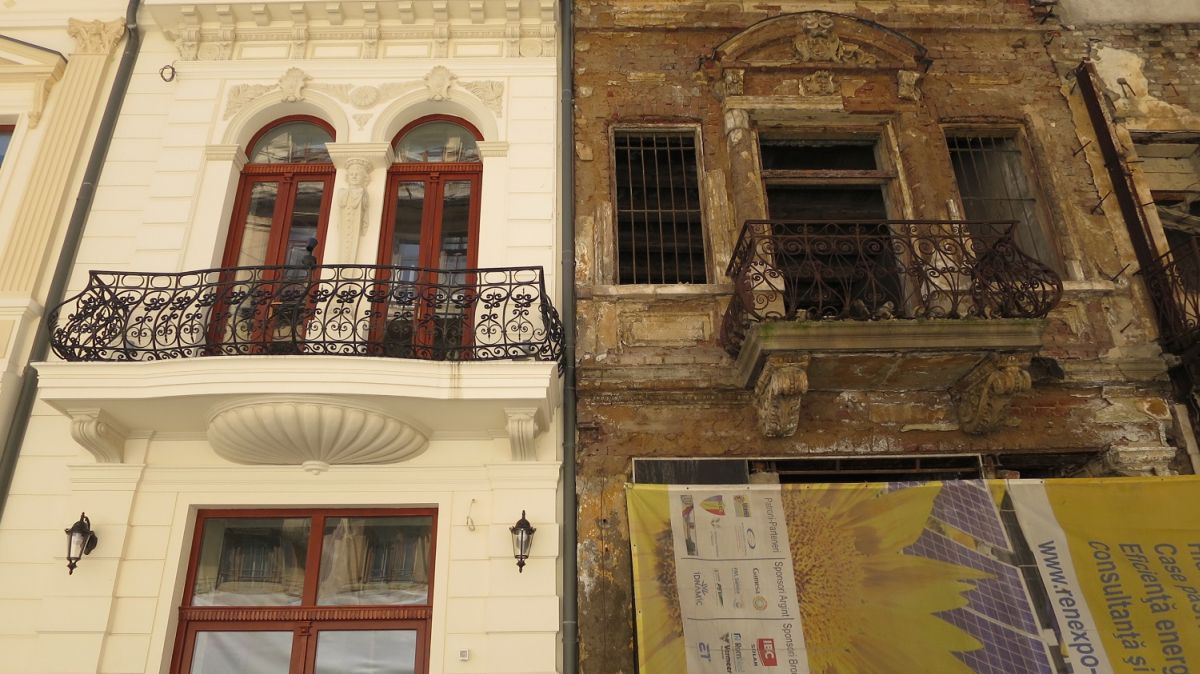 However, during the day cobblestoned streets, restaurants, bars and narrow passageways make for an interesting and at times atmospheric stroll. Be sure to pass by the spooky statue of Vlad Tepes at the site of the remains of the Princely Court. He reigned as prince in the 15th century when he was a war lord and his activities earned him the moniker as Vlad the Impaler. At night, clubs and bars turn the town into a party zone staying open into the wee hours.

Look out for Villacrosse Passage. It has a touch of the orient about and connects the Old Town with probably the most high-end avenue in Bucharest – Calea Victoriei. This is where you will find designer shops, art galleries and expensive coffee shops. Calea Victoriei leads to the city’s most famous area, Revolution Square.

Also, make time to walk by the monument of Point Zero (or Kilometre Zero) located by St George’s church. 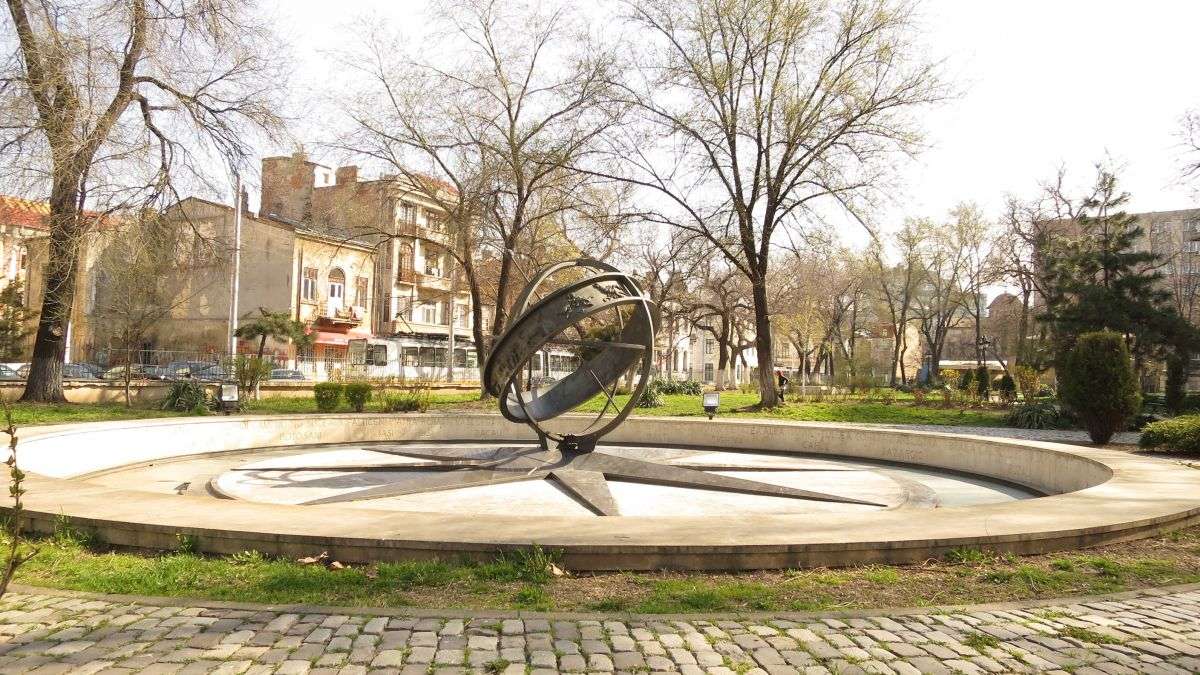 It was created by Constantin Baraski in 1938 and its function is to show the distances from Bucharest to other cities in Romania. Eight sections represent a Romanian historical province: Muntenia, Dobrogea, Bessarabia, Moldavia, Bucovina, Transylvania, Banat and Oltenia. But what makes this most interesting is that it also shows the cities that are no longer part of Romania such as Chişinău, Orhei, Tighina, which are currently in the Republic of Moldova, as well as Silistra and Dobrich (Bazargic) in Bulgaria, which were part of Greater Romania from 1913 to 1940.

That historic moment on December 22, 1989 when Nicolae Ceaușescu realised that the 80,000 people that had gathered in Palace Square had not done so to hear his speech but to start a revolution was captured on national TV from the balcony of the former H/Q of the communist party.  He began to deliver his speech but soon shots were being fired. He was airlifted by helicopter from the roof top but he and his wife were executed three days later. The square was renamed Revolution Square and the building is now home to the senate and the Ministry of Interior and Administrative Reform

Nicolae Ceausescu was airlifted from this building the former communist headquarters

The statue in front of the building is that of  Romania’s foremost politicians, Iuliu Maniu., created by artist Mircea  Spătaru. He served as the Prime Minister of Romania for three terms during 1928–1933. He was opposed to communism and so he was imprisoned in 1947 when the communists came to power. He died in 1953 in Sighet prison.

Around the square are the former Royal Palace which is used as the National Museum of Art of Romania, the tall white Memorial of Rebirth obelisque and the mid-19th century Roman Athenaeum opera house where the Romanian Philharmonic Orchestra play. The latter is a Romanian symbol and appears on a 5 Lei note. Note the Athenaeum’s columns; they are the exact replica of those of Erechtheionin in the Acropolis in Athens. 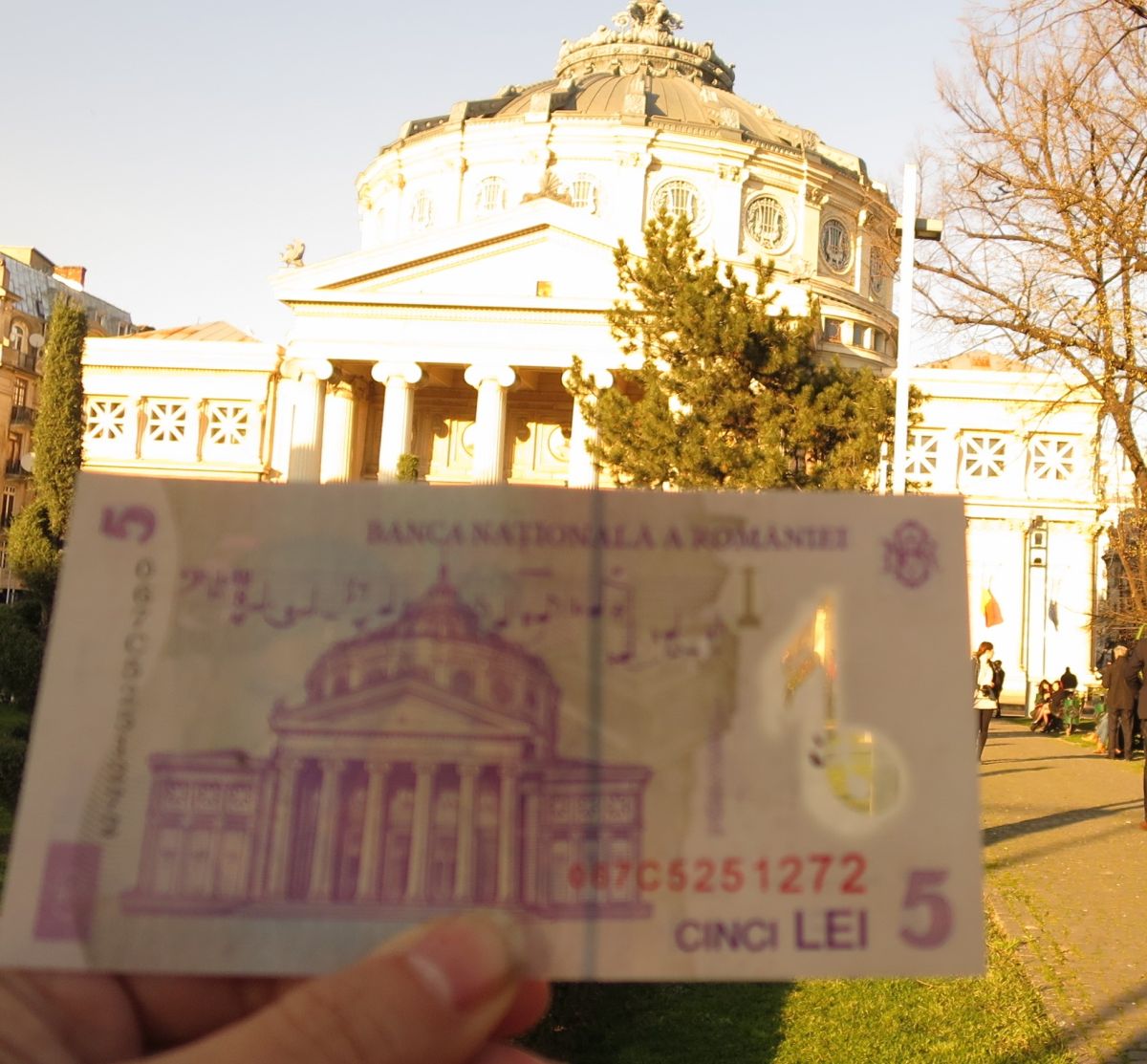 Newly reopened in 62–64 strada Franceză in the old town is Bucharest’s oldest inn, The Manuc Inn. It was built in 1812 and this is where Treaty of Bucharest between Russia and Turkey was signed. The complex has bars, a coffee-house and restaurant around a courtyard. The restaurant menu offers Romanian and Molodovan cuisine including a Dracula chicken which they say is pretty spicy.

Set over two floors, Lacrimi si Sfinti (Tears and Saints) is a wonderful looking venue of white-washed walls, sturdy rustic-styled tables and chairs, colourful woven upholstery and a collection of old accordions. The kitchen serves Romanian food with a modern twist, and diners can choose from the likes of “Well Tempered Sausages” (made with a mix of goose, pork, lamb and veal meat and fine herbs), turkey stuffed with prunes and garlic or even the ironically named “Hipster Risotto”. The owner is a famous Romanian poet, who also makes his own excellent wines with both Romanian and typical grape varieties. Be sure to try at least one!

Alternatively, the family-owned Harbour Restaurant offers hearty food in the town centre. The floors and walls decked out in wood and with lots of seafaring paraphernalia hanging from its walls and ceilings it all combines to create an atmoshpheric maritime scene. The menu has a diverse selection of Romanian dishes ranging from beef tenderloin on hot stone, turkey breast and tomato sauce, lamb chops and duck leg served with cabbage. 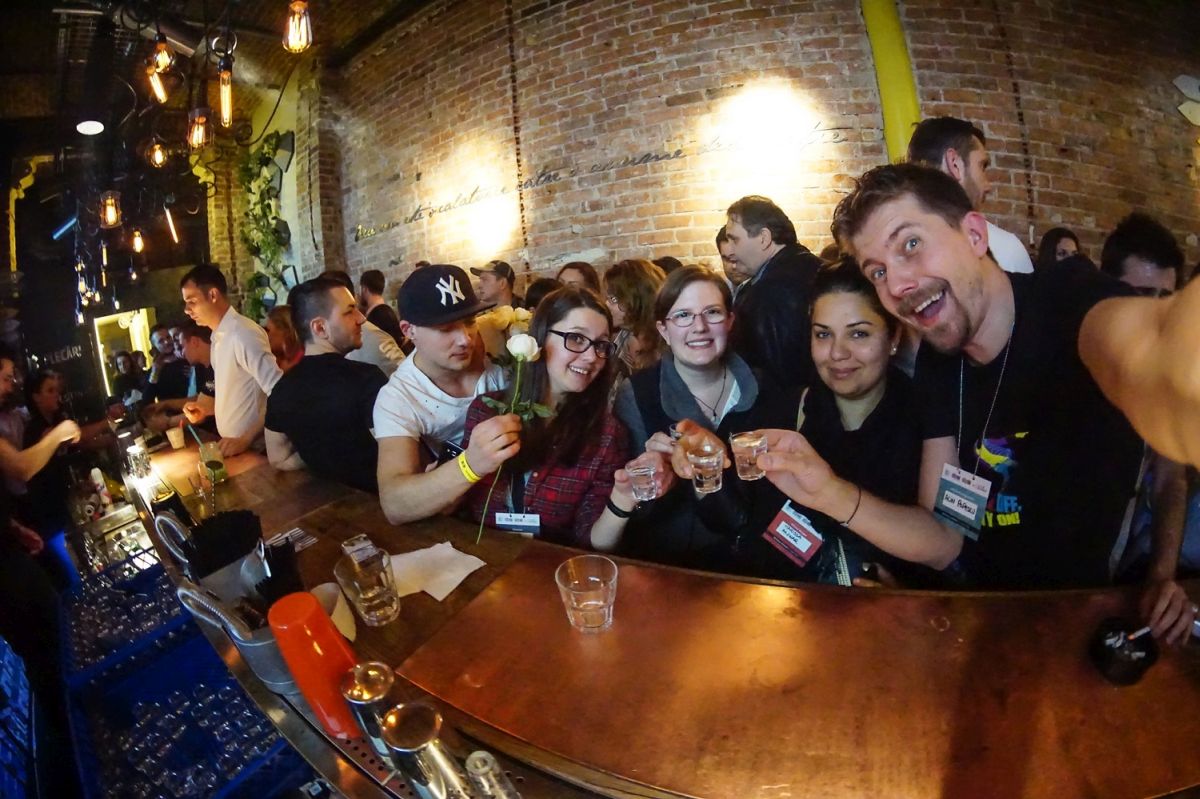 All drinks come in shot glasses

Bucharest’s Old Town is chockful of places to lubricate your tonsils (not to mention some less salubrious places for some less salubrious lubrication… so be warned!), but Shoteria wins my vote for sheer feel good factor that the narrow space and live DJ generate. The bar menu offers a tantalising and innovative mix of liver poisons on one end of the bar, and then on the other at their “Recovery Station” a number of non-alcoholic juices and coffees to aid your passage back to sobriety. You have to admire their business sense… they sell the poison and the remedy just feet from each other! If you get bored you are seconds away from the next bar.

Sharron Livingston is the Managing Editor of The Travel Magazine – a creation borne about by her passion for travel.

Duncan Rhodes is the Editor of Urban Travel Blog, the independent guide to city breaks. For more great urban tips, aside from on his blog, you can find him on Twitter, Facebook and Instagram.

Flip flops and sunglasses in a bag