An hour out of the main hub of Belgium’s capital Brussels, and you are in the stunning countryside of Wallonia. It’s a region rich in architecture, history and patriotic people and offers two interesting cities.

Two contrasting places, the citadel dominated city of Namur and the shabby, but chic Liège are at the heart of this fascinating area.

Also read: Top 10 things to do in Brussels

Stroll around Namur, the capital of Wallonia

The historic capital of Wallonia, Namur, with winding streets and impressive architecture including the stunning 18th century cathedral dedicated to St Aubain, is a great place to wander round. You will find it located on the junction of the Sambre and Meuse rivers surrounded by a vast citadel, once one of Europe’s fiercest fortresses.

The Parliament of Wallonia stands proud. Look up and you’ll see its belfry a UNESCO world heritage site. 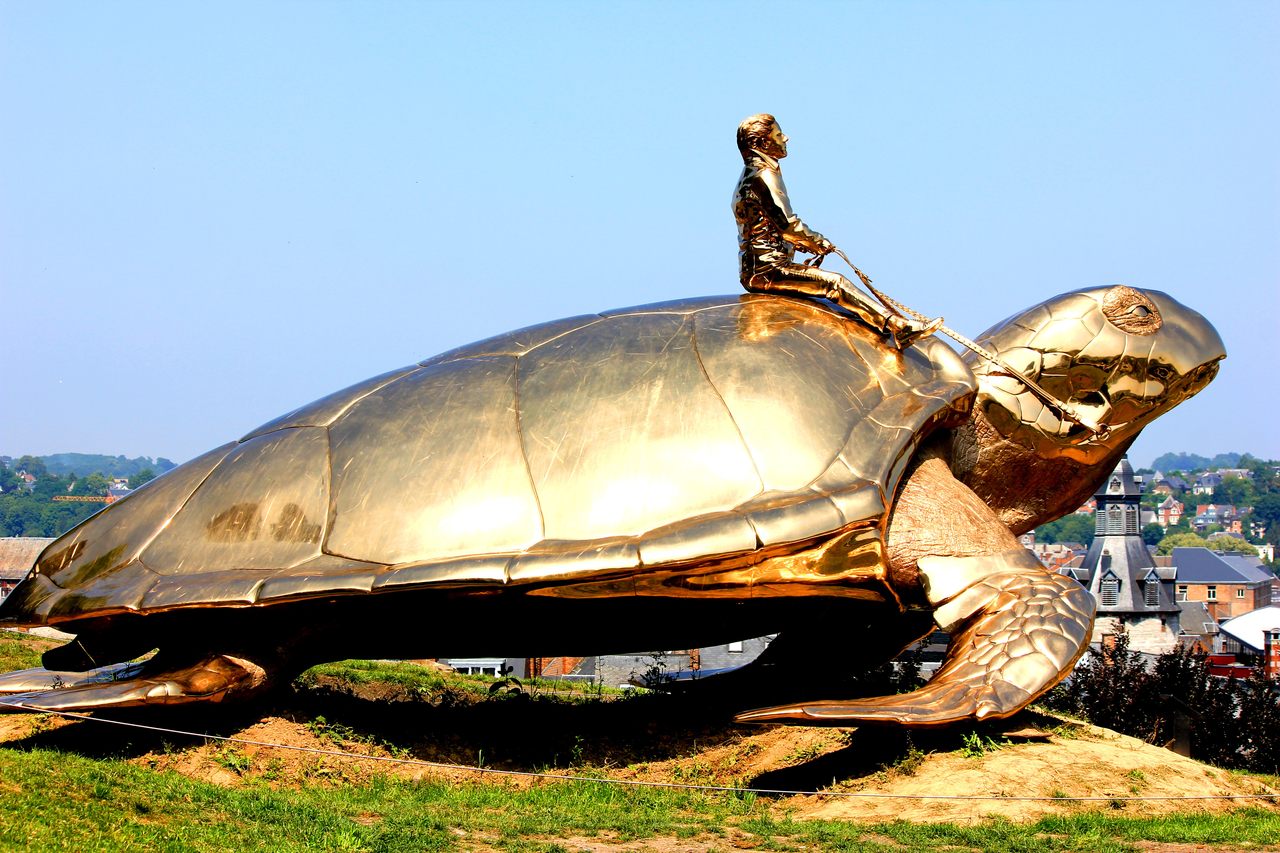 There an incredible giant golden turtle that sits at the top of the entrance. It’s purpose is to serve as a symbol of Namur’s dedication to the slow pace of life.

The city has some odd customs too including the Fight of the Golden Stilt held on the third Sunday in September where two teams dress in medieval teams while standing on stilts and do battle in the town’s main square.

Fascinating underground tunnels can be explored and are brought to life with digitally enhanced soldiers who tell the history of the fortress, which dates right back to the Celts and Romans. The story includes a period of devastation during World War I and II.

The tunnels played an important part in protecting Namur and are put to good use in modern times, with enterprising businesses such as a perfume workshop that takes advantage of the near perfect conditions to produce a sweet scent.

Also running along the Meuse River is the strangely attractive city of Liège. First impressions are that it is a bit drab, but as you begin to explore, it unravels into a place of many talents.

You could start with A climb up the 374 steps of Montagne de Bueren, one of the world’s extreme staircases will have you admiring the views of the city and the nearby trendy neighbourhoods, full of people who just want to party.

The modern and iconic Liège-Gullemins railway station is worth some attention. It was designed by Santiago Calatrava in 2009 with bold bird like sweeping curves covered in glass and concrete. A massive Rubik Cube hangs delicately from the roof. Stand at platform 1, you can see the impressive 118m sail-shaped skyscraper.

For a chance to rub shoulders the locals, don’t miss Belgium’s oldest and largest market. It is held every Sunday at La Battle and has every nick nack you can imagine on sale along with the traditional foods and drinks.

June to September is  festival time in Namur, with one of the most popular held at the seat of liars. During the festival, people are asked to sit in the seat, tell a story and the audience has to guess whether it is true or not.

Liege – celebrations of 15 August in Outremeuse

Liège marks its festival with a week of fun at the Festival Outremeuse in August which is rounded off on the 15th with a sermon read in Walloon dialect while the audience enjoy a few glasses of Peket.

There are puppets, firecrackers, traditional dancing and rowdy crowds. Bizarrely the festival is closed by cremating a bone and then symbolically burying the ashes, while the black wearing locals pretend to weep, listen to sad music and then burst into happy songs.

Vegetarians will struggle as its meat heaven in Wallonia unless of course you like waffles. Liège is famous for its waffles, often said to superior to those made in Brussels simply because it has rounded edges and tiny squares which mean toppings such as syrup and chocolate can soak into the waffle to make it super tasty.

There are waffle specialists in both Liège and Namur, with Une Gaufrette Saperlipopette, the best bakery in Liège, always with a huge queue outside it.

In Namur The Grill restaurant inside Les Tanneurs Hotel is a great stop off, with classy cuts of meat, amazing coffee desserts and plenty of Belgium beer.

Liège has an abundance of top joints including The Amon Nanesse restaurant which is a rambling antique house with bare-brick walls and heavy beams and the place to try out the speciality sweet raisin gravy meatballs which are infused with juniper gin and the chic, mirror covered Bruit Qui Court restaurant, where caramalised ham, smoked duck and salads sprinkled with exotic fish  are top of the menu.

In Namur stay in the charming Les Tanneurs Hotel, created by connecting 15 traditional houses together. A classy place, with beautiful rooms and some stunning stonework combined with mod cons, such as television in the bathroom. As well as a tasty buffet breakfast you get the chance to try out the strangely addictive pancake making machine.

For something more contemporary the Pentahotel Liège is a good choice. It looks like a 1960’s office block on the outside, but inside you are transported to an American style diner bar with pool table and comfy sofas, Hollywood lamps and glittery disco balls. When you check in, the bartenders suddenly stop mixing the cocktails and become fast moving receptionists.

Low cost airlines head into Brussels Charleroi Airport and then a short bus journey into the city takes you to the main railway hub and frequent fast trains to Wallonia.