Travel Guide to Tel Aviv, Israel – what is there to see and do 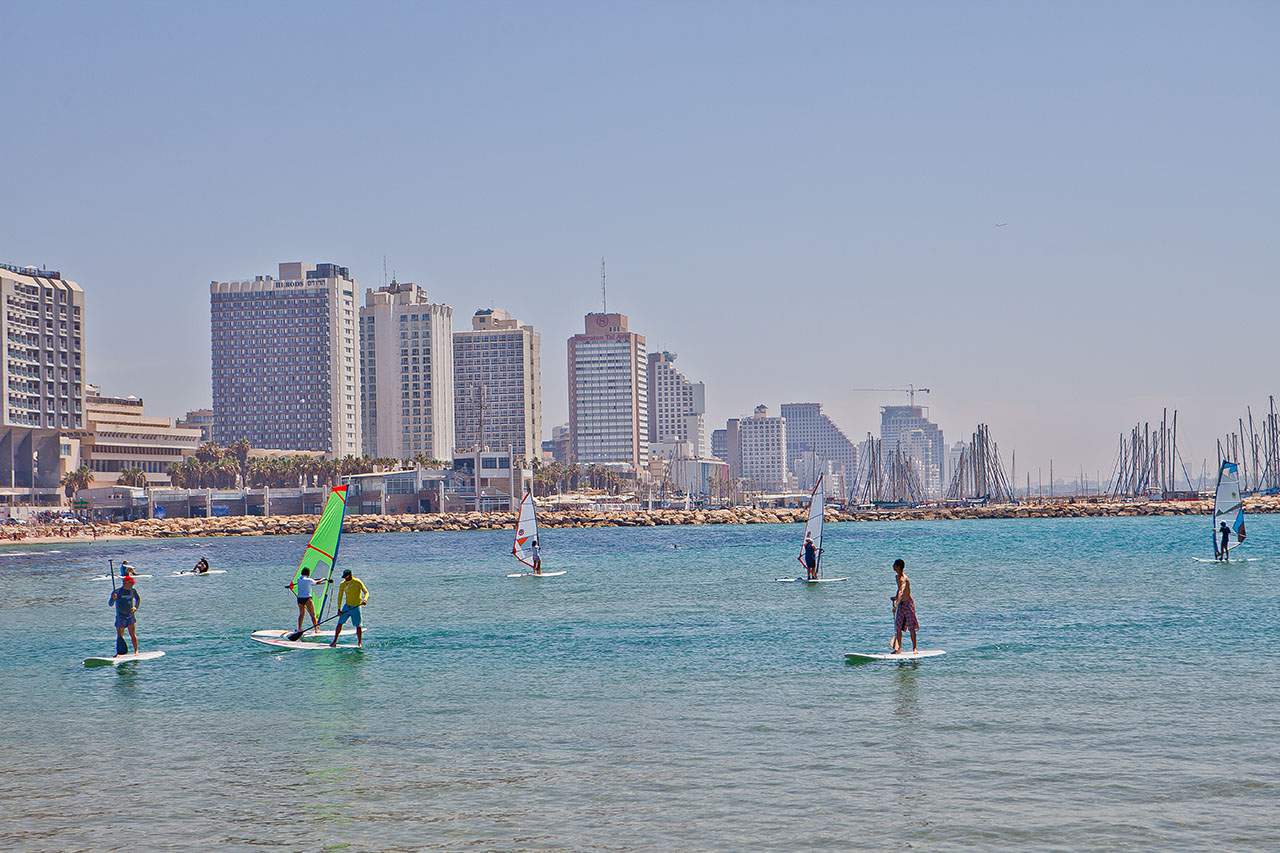 I defy anyone to be bored during a short break to Tel Aviv. The high octane vibe is almost tangible and urges you to walk its streets and explore. Do so and you’ll find this is a moody city: beautiful chill-out beaches hemmed by high rise hotels and lapped by the blue Mediterranean sea and a fantastically beautiful promenade. Yet just a road or two inland buildings look in need of some love, yet the vibe prevails. 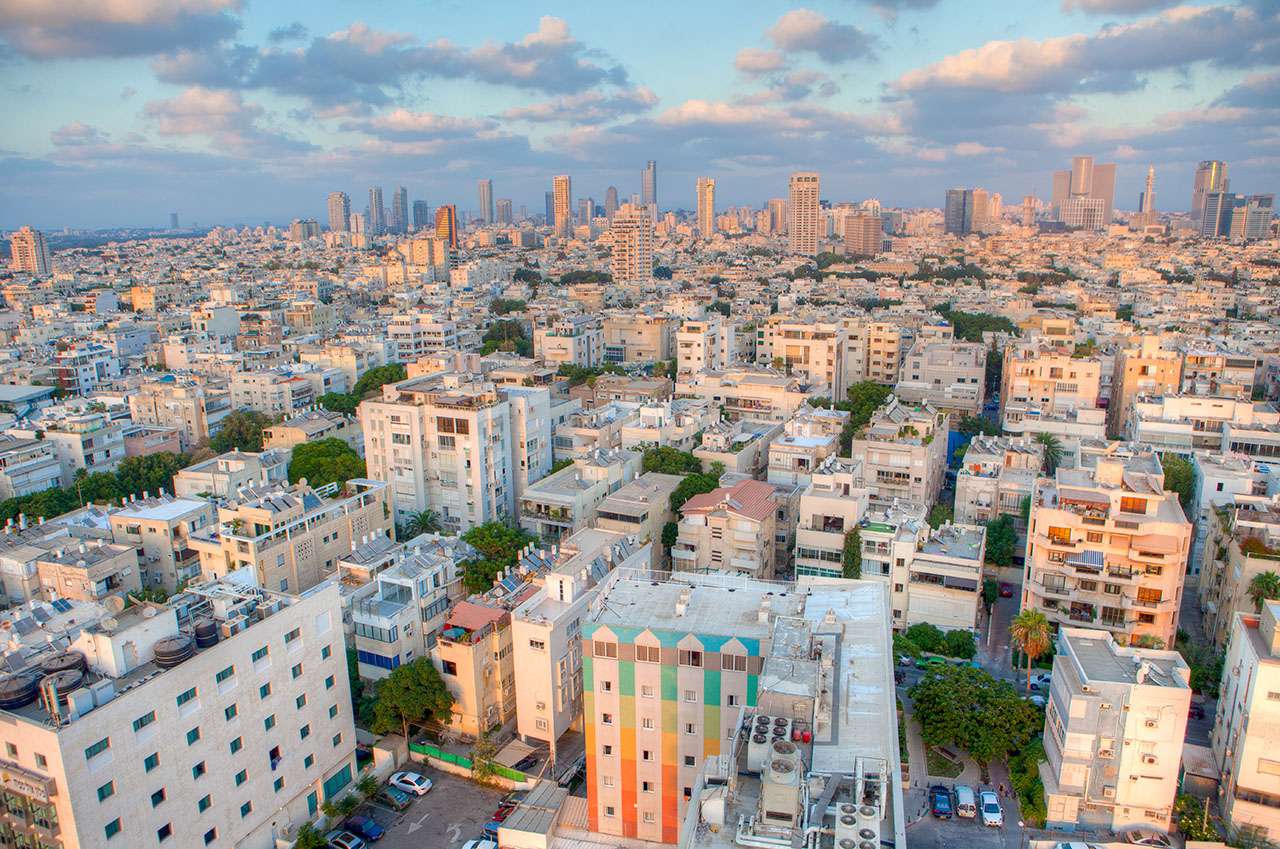 At its commercial centre the high rises look like a New York mini-me while the ancient port of Jaffa in the south exudes charm in its yellow stone architecture and winding hilly alleyways.

Then there’s museums, markets, shopping and above all, a simply sensational foodie scene. This city has it all and, unbelievably, all packed into a compact area of just 52 km² (around 20 miles).

Check out the beaches

Grab your fiip flops because Tel Aviv is a seafront city with a Tayelet (promenade) that hems a gorgeous stretch of 12 soft sand beaches, each with its own – if somewhat insouciant – personality.

Metzizim in the north is a superb family beach with shallow waters and a life guard. It’s followed by the Religious beach with allocated days for men and women. 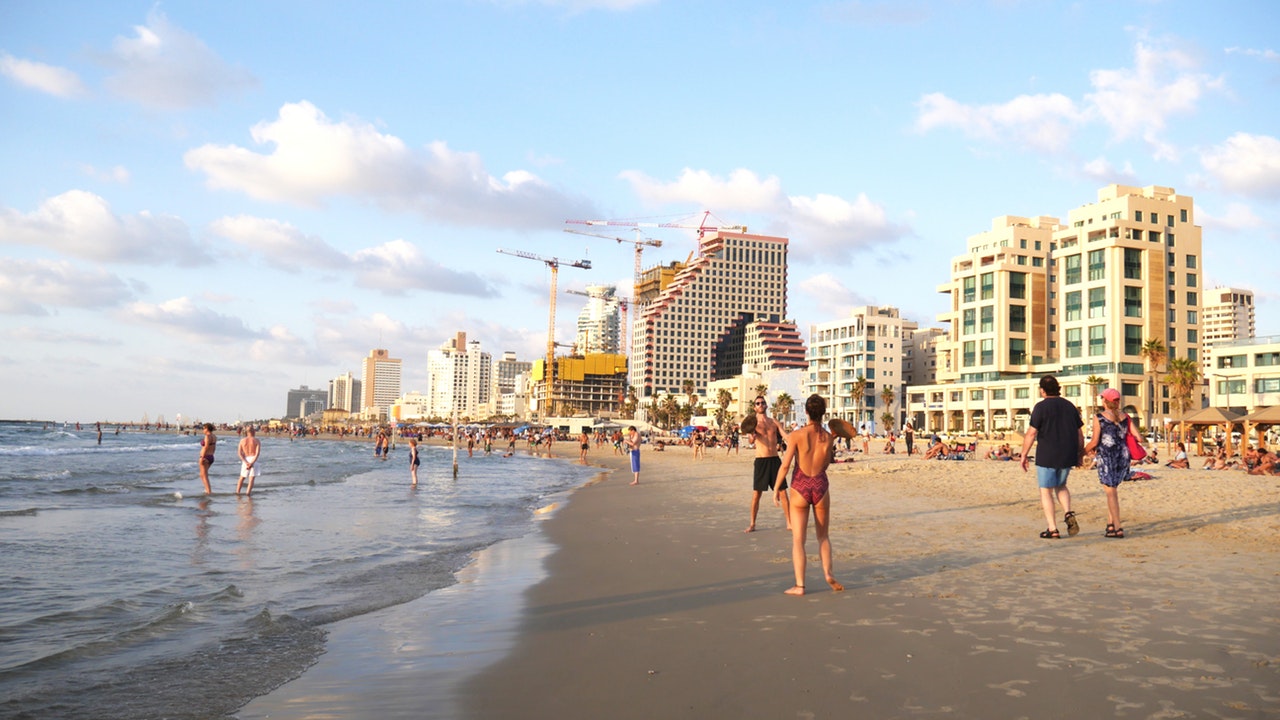 Further along is the gay beach in front of the Hilton Hotel right off Independence Park. It has become a trendy hotspot because of its fun vibe. During Pride Week it’s the busiest place in the city.

Three popular beaches Gordon, Frishman and Borashov cover the central stretch and this is where locals and tourists hang out sometimes playing matkot (paddleball).

Guela beach has its own al fresco gym while bizarrely, Drum beach is where anyone can turn up at the weekend and beat their drums.

The stretch ends with a dog beach followed by Alma (home to the wonderful Manta Ray restaurant) and Jaffa beaches in the south of the city much loved by surfers because there are no wave breakers which means huge waves on a windy day. 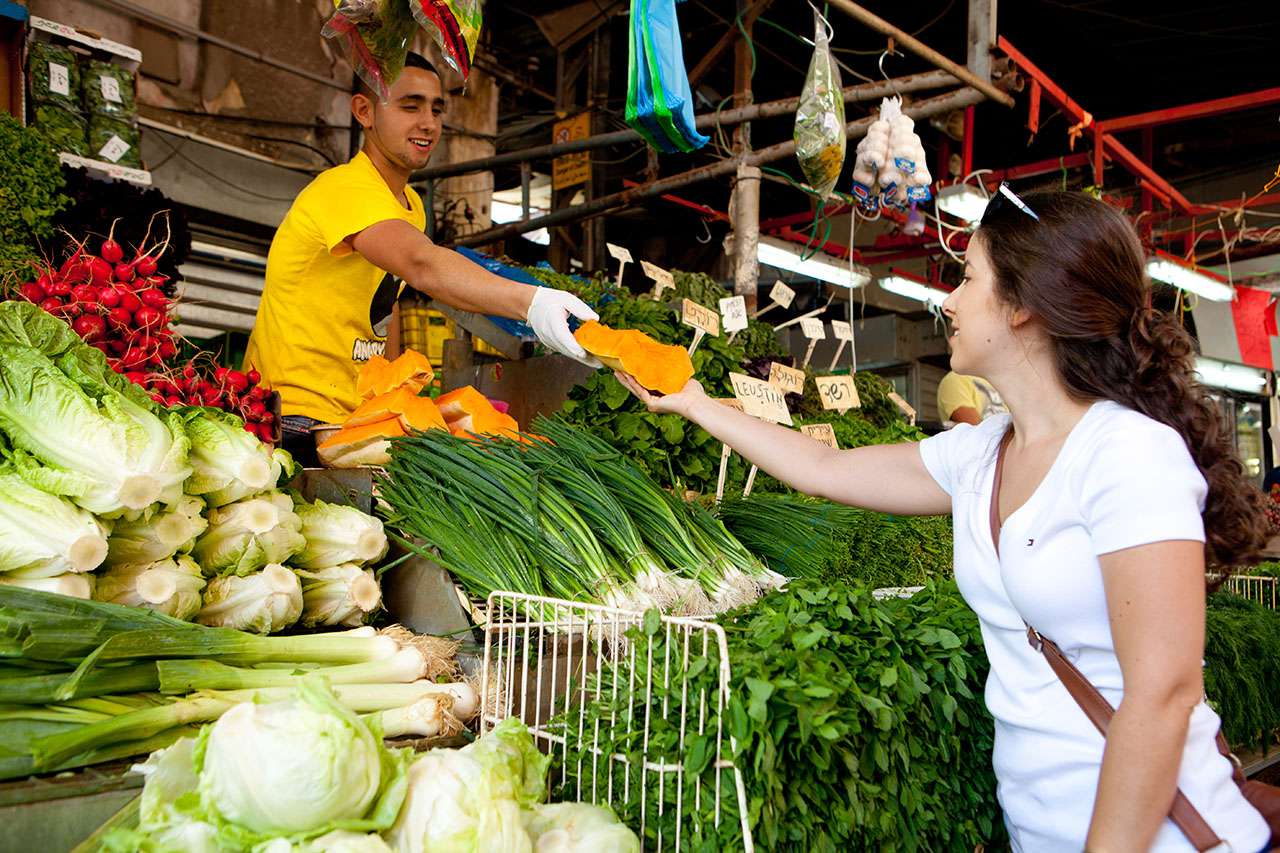 Oh the joy of a vibrant market and Carmel Market is just that. It’s been there since 1920s when it was just a humble Yemenite market, but today it’s colourful, aromatic, noisy and THE place to buy all sorts of bric-a-brac and food such as local vegetables, nuts, fruit, dates, halva – a sweet flaky, dense, tahini based candy – and street food to go. 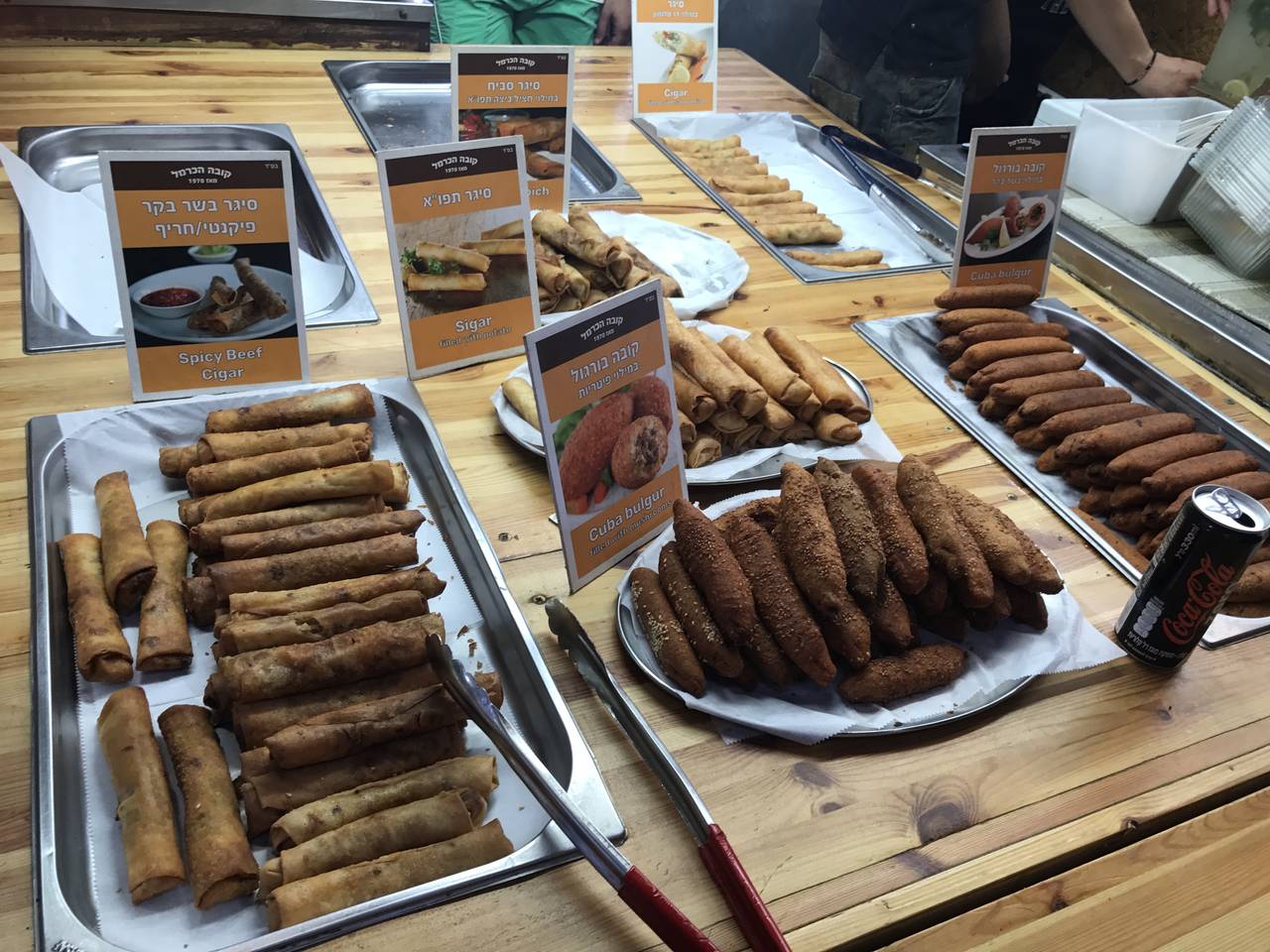 Food on the go

Pick up a Cuba bulgur (cracked wheat and minced onions), or a spicy beef cigar to eat on the go but save space for the Humus restaurant at 11 HaCarmel Street. It’s easy to miss so keep an eye out for for a doorway flanked by Judaic Hebrew text behind a couple of fruit vendors. Go straight to the counter and point to what you want on your plate of humus; pickles, boiled egg, onions, that kind of thing, and you’ll get freshly made pitta to dip into it. 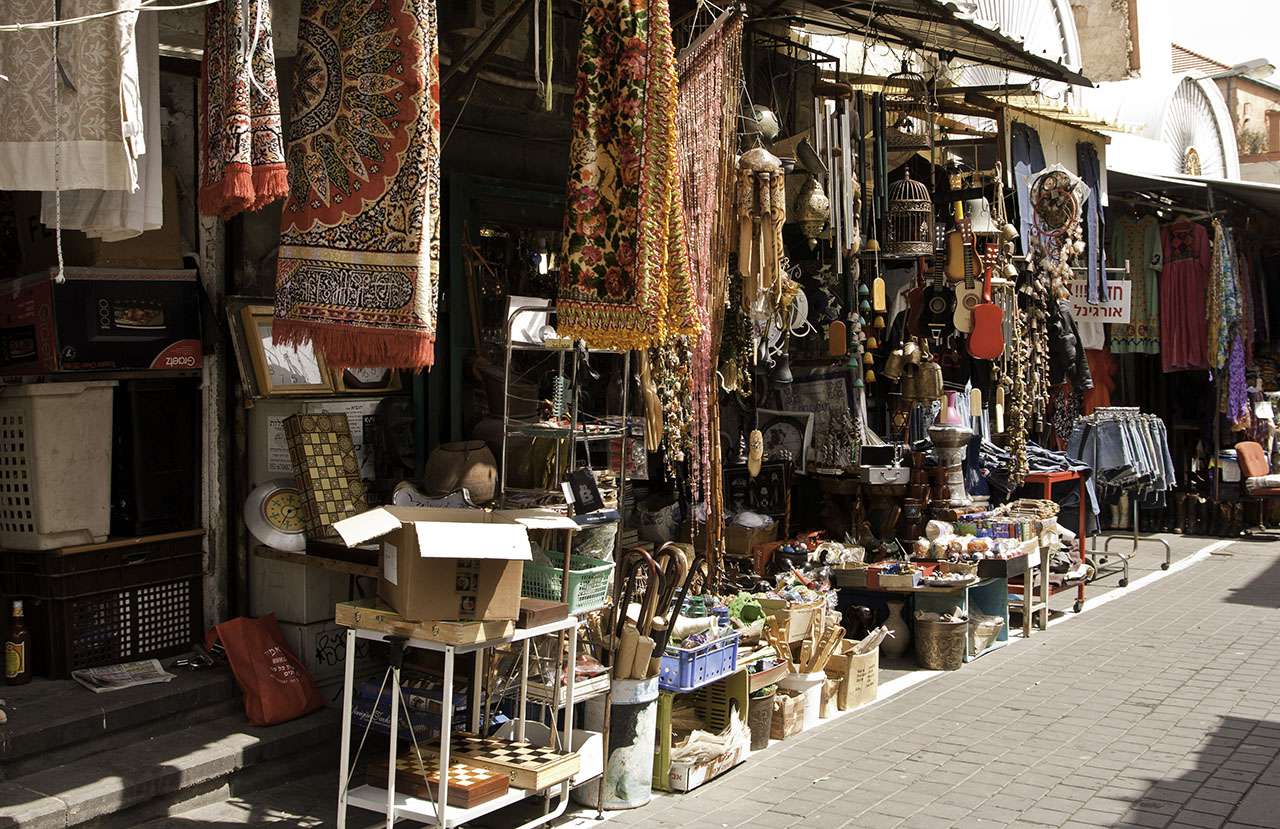 This is where you find the carpet makers, furniture restorers, cobblers, one-man jewellery makers and second-hand goods as well as alleyways full of beguiling, colourful and sparkling middle eastern souvenirs. 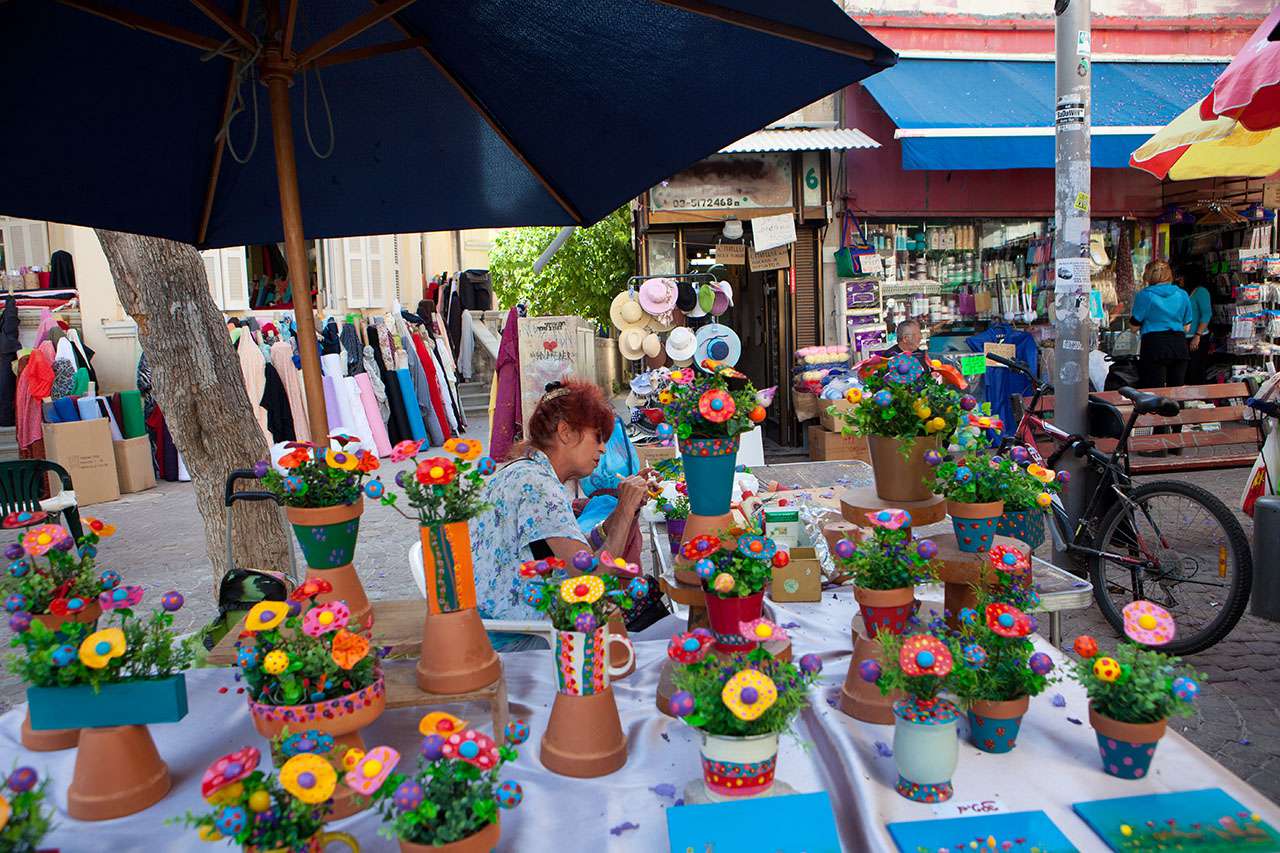 The talent is awesome and coming away with a trinket or artwork is going to be hard. Furnishings, art, ceramics, jewellery, gifts, photography and items that defy description, all created by individual local artisans.

Sarona Complex is the new boy on the block. It surrounds the restored German Templar village built in 1871 on what started as swampy land bought from a Greek Monastery. There are several quaint two-story buildings complete with shutters and tiled roofs, some new retails outlets, around paved squares and a gorgeous lilly pond. There’s also a huge indoor market whose 8,700 square meters is filled with 91 shops, stalls and restaurants – a culinary complex if you like. 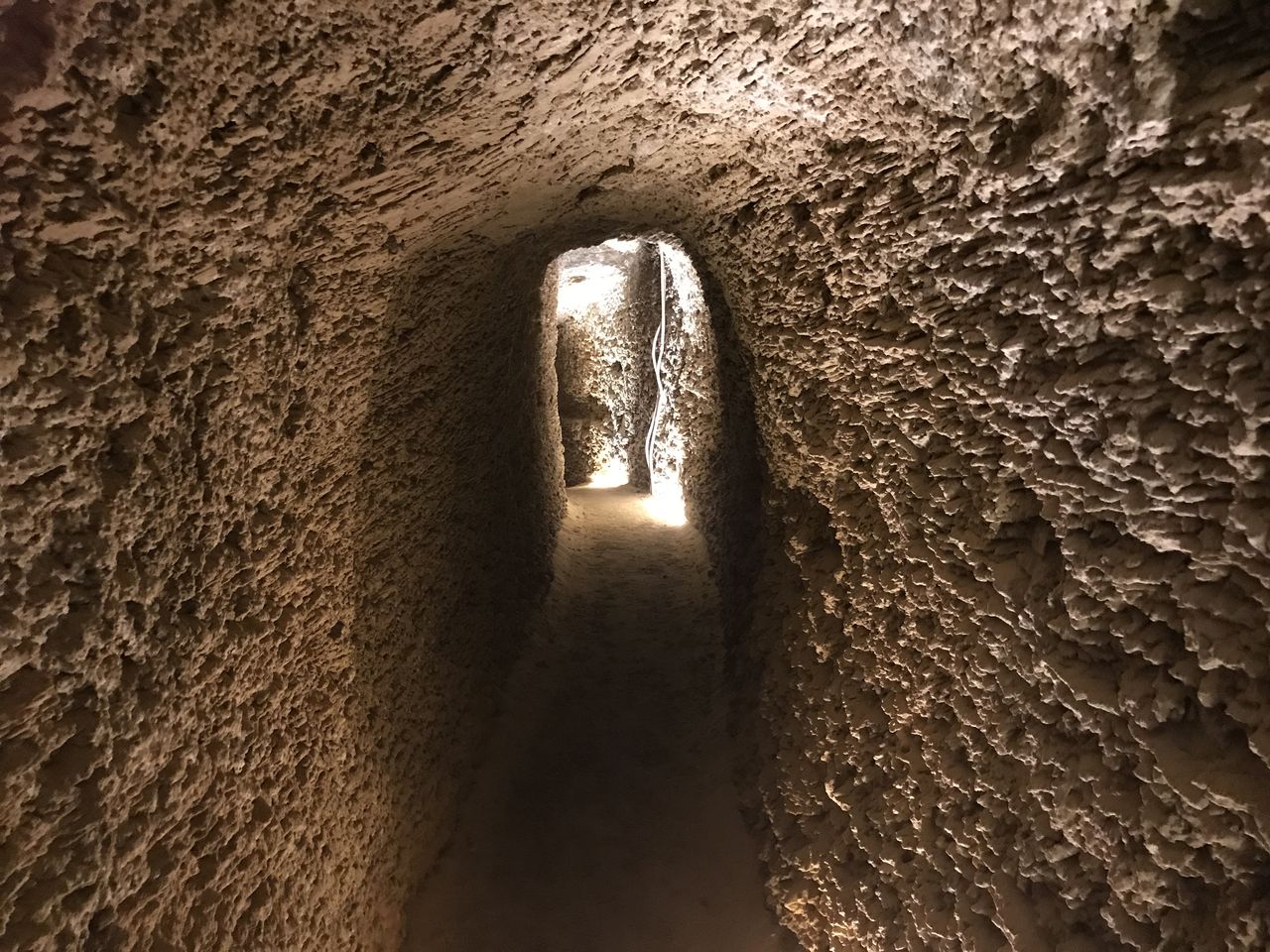 It is worth doing a tour through the nearby Templars Tunnels which connected the two village wineries. When the Templars left, the tunnels were used to reconstruct “stolen” planes in pre-state days. Air force veterans dismantled, smuggled, renovated and reassembled 15 planes that were used before and during the War of Independence. You might say this was the beginning of the Israeli army. 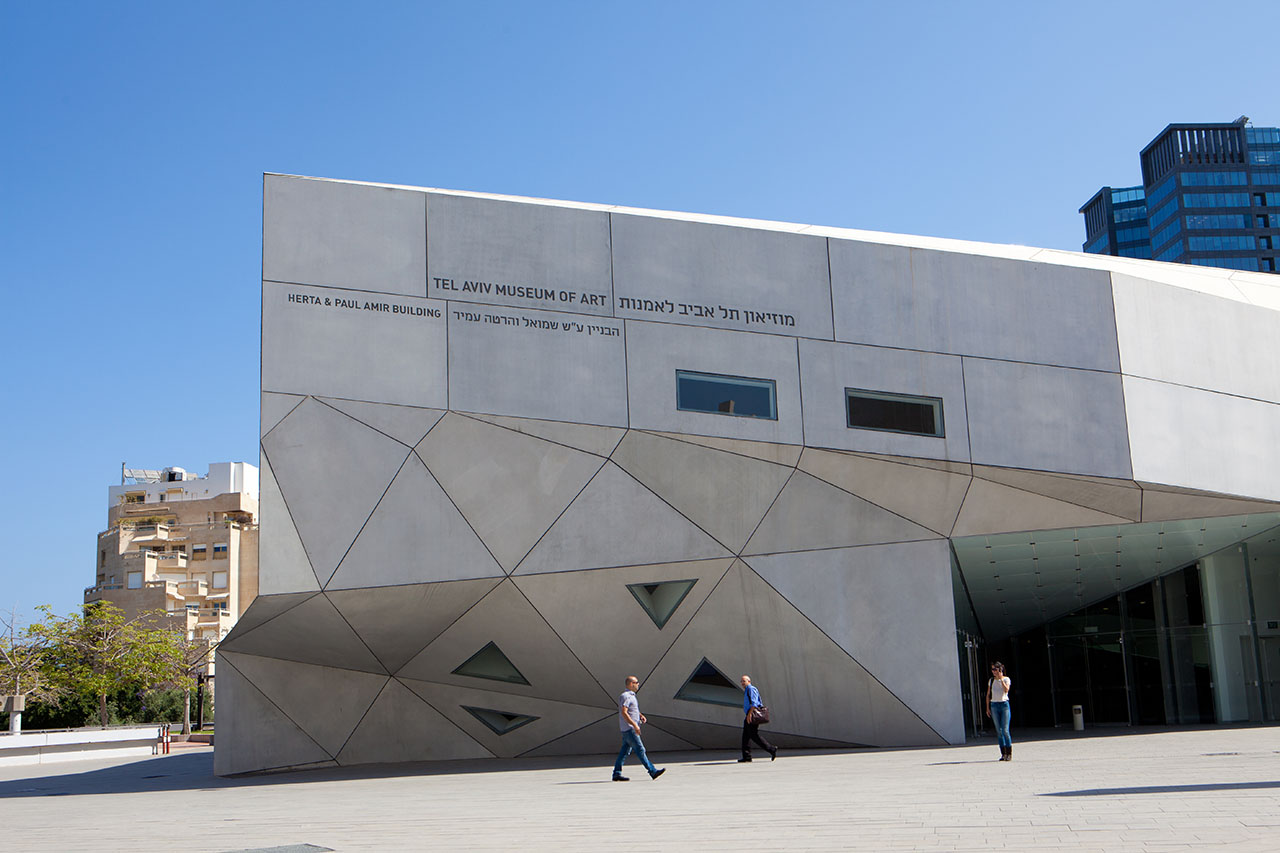 Though there are several really worthwhile museums the Tel Aviv Museum of Art on Sderot Sha’ul HaMelech, is the most beautiful. The futuristic building is in itself an architectural spectacle and inside its wide open spaces you’ll find sculptures by greats such as Degas and Auguste Rodin and artworks by Chagal, Cezanne, Dali, Monet, Henri Moore, Archipenko, Picasso, Klimt, Kadinsky. Seriously, if you only have time for one museum, make it this one.

Go for a walk 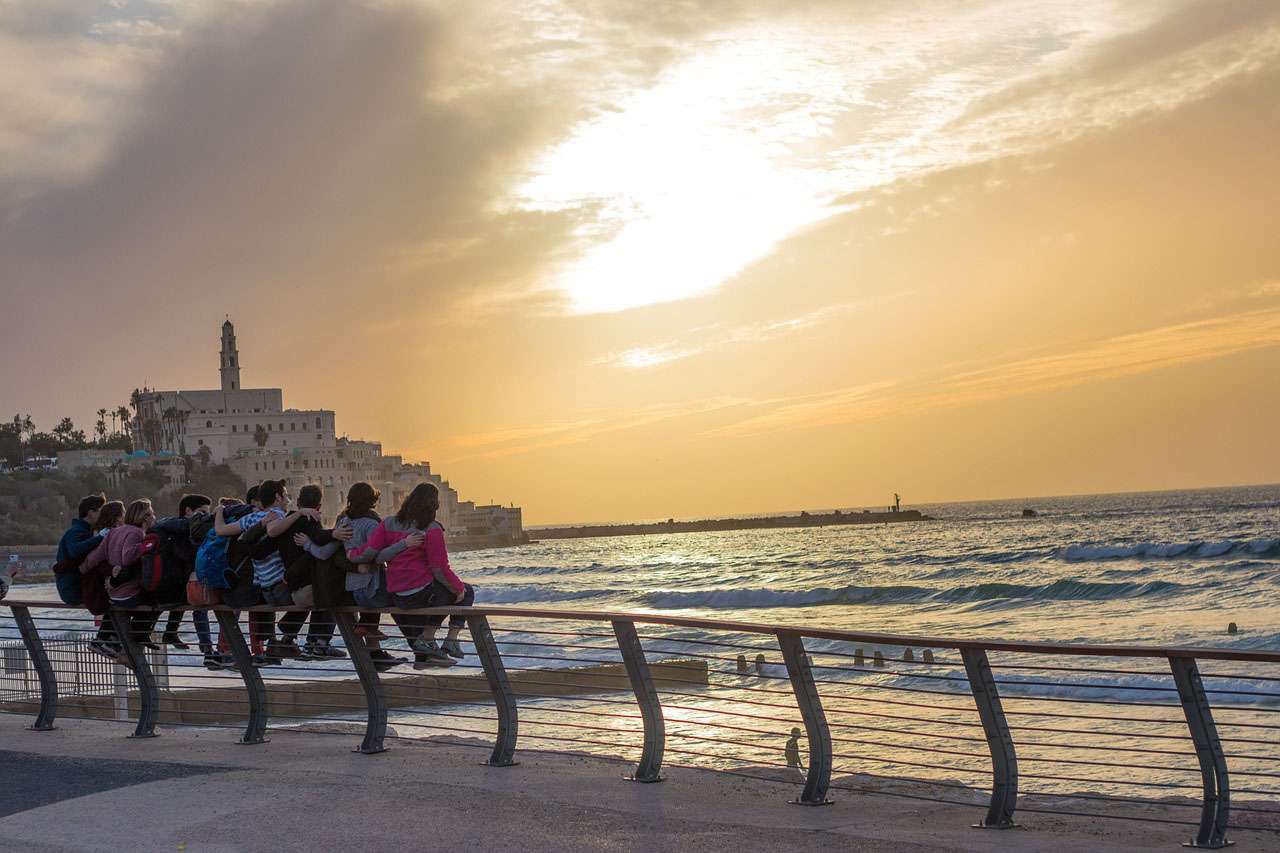 For a stylish yet cultural walk make time to saunter along Rothschild Boulevard. This tree lined boulevard is home to the “White City” – a clutch of world-famous UNESCO German Bauhaus architecture known for straight lines and no-nonsense design.

Rothschild Boulevard is also where the Israeli Independence museum is located (number 16) and its worth droppin in as this was the very place where the state of Israel was born.

Jaffa port and its flea market

Head south to the impossibly quaint ancient fishing port and city of Jaffa. Jaffa (or Joppa) dates back to biblical times and the architectural style hasn’t changed. Artists hang their artworks on the yellow stone walls of their studios and within the twisty stone passageways almost hidden doorways that lead the way to tiny shops selling Judaica.

The Wishing Zodiac Bridge which depicts the 12 zodiacs along its stretch leads to the red-bricked Franciscan St Peter’s church which, they say, hosted Napoleon is 1799.

Jaffa has its own Flea Market where Middle Eastern trinkets, cobblers, carpet makers and small jewellery designers ply their trade.

Must Eat and Drink 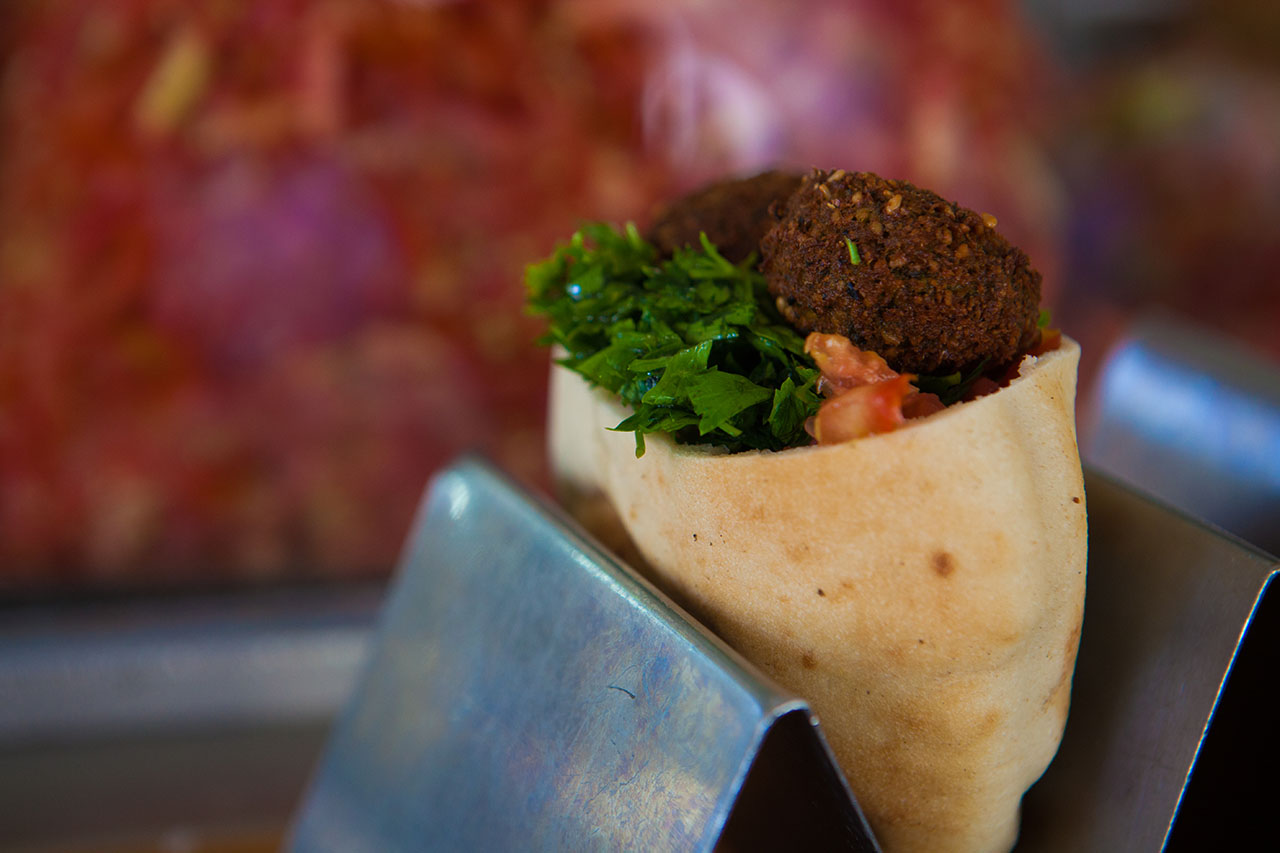 This city has a most spectacular foody scene. From Master chef curated dishes to midnight munching and everything in between, this city has it all.

This casual yet hip restaurant is located on an intersection marked out by a pretty fountain. Chill out with other trendies and enjoy simple décor with plenty of plants and a hard-to-miss pink flamingo and flavoursome food.

This trendy restaurant by Eyal Shani is also an entertaining treat. While seated on a high chair by the open kitchen has a nonchalant style. Ditch niceties such as plates and instead you eat off brown paper table clothes and bread is delivered in brown paper bags. Rock salt is thrown onto the table while several little plates such as tehini and creme fresh turn up. 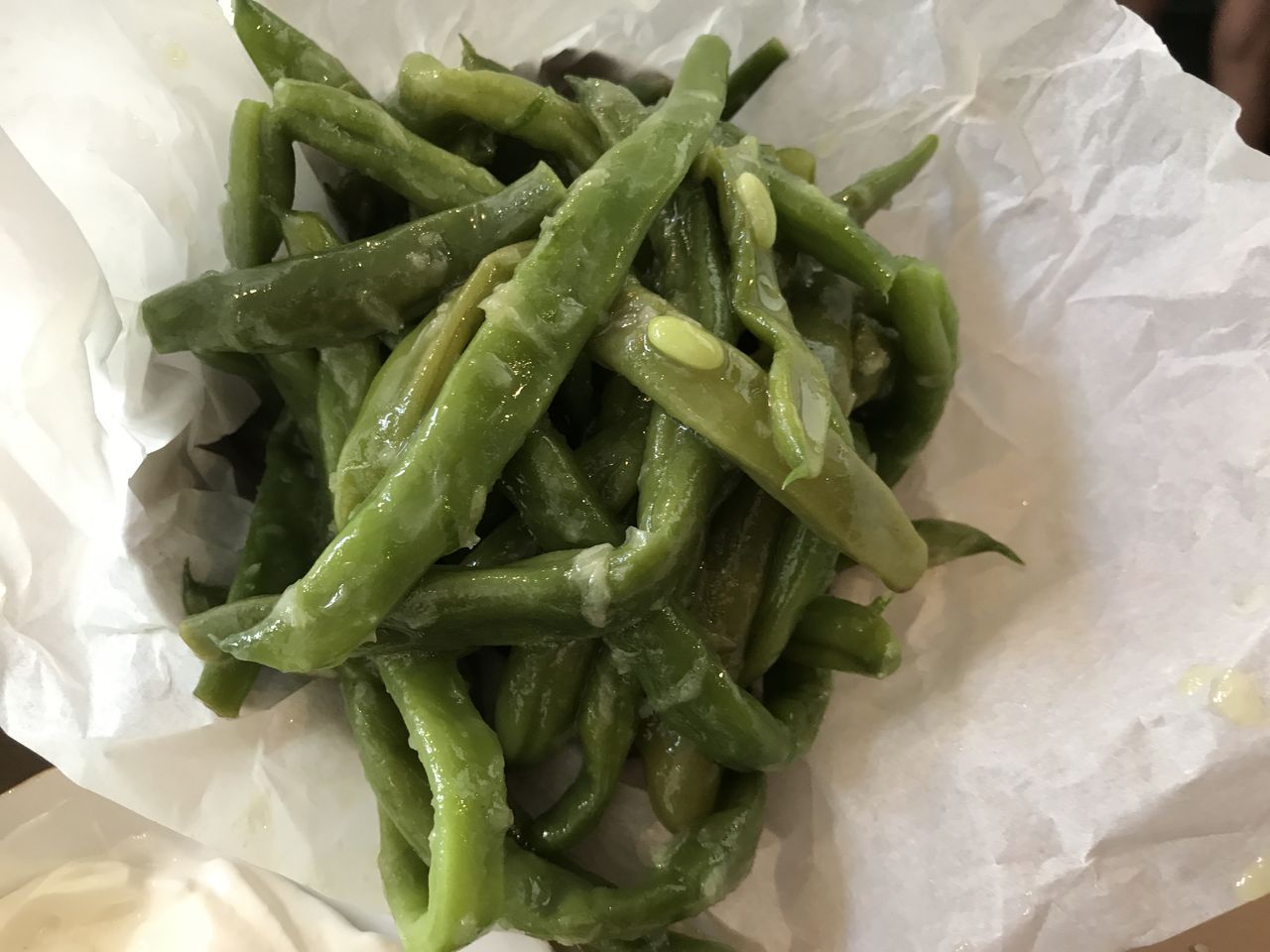 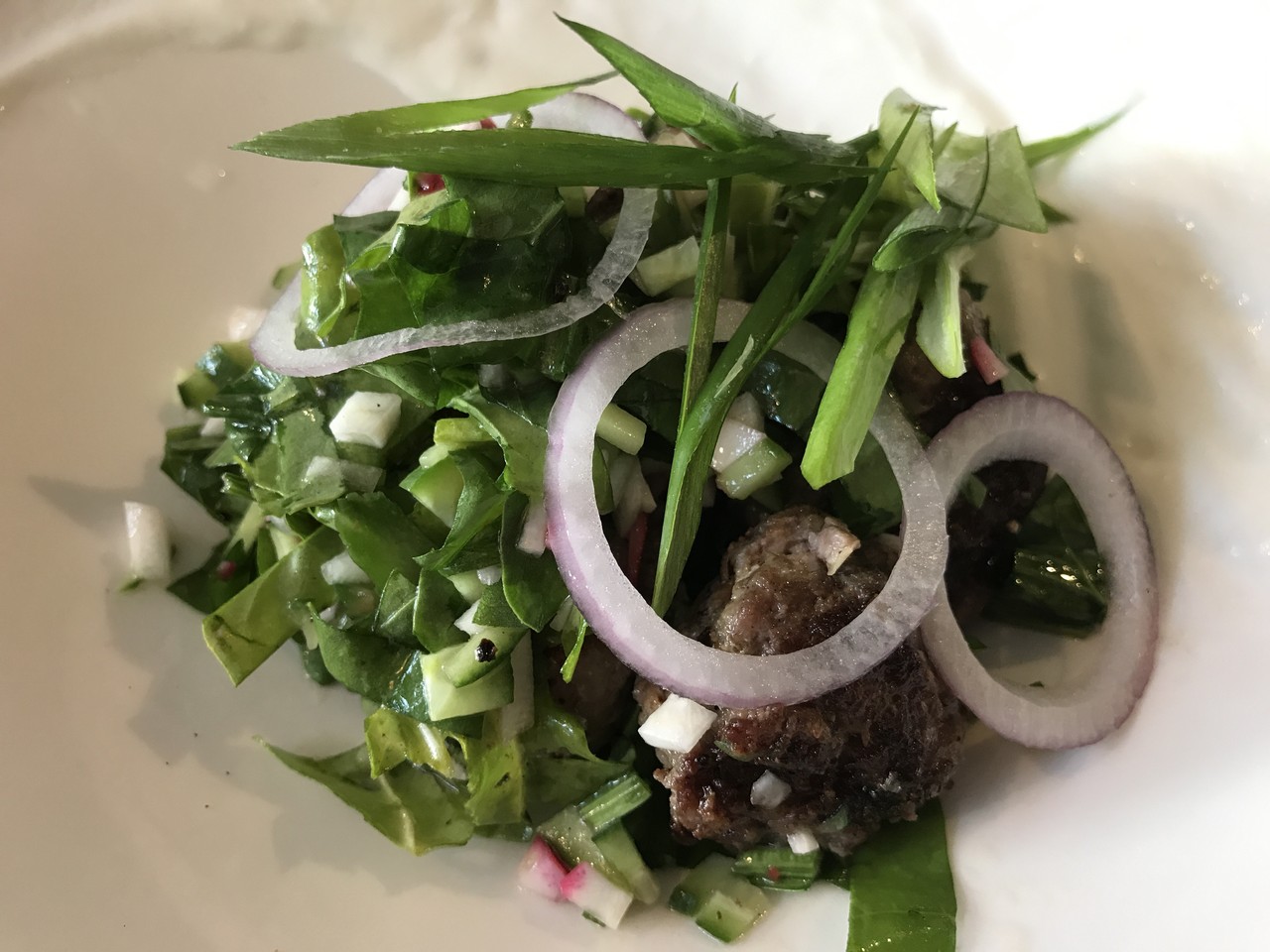 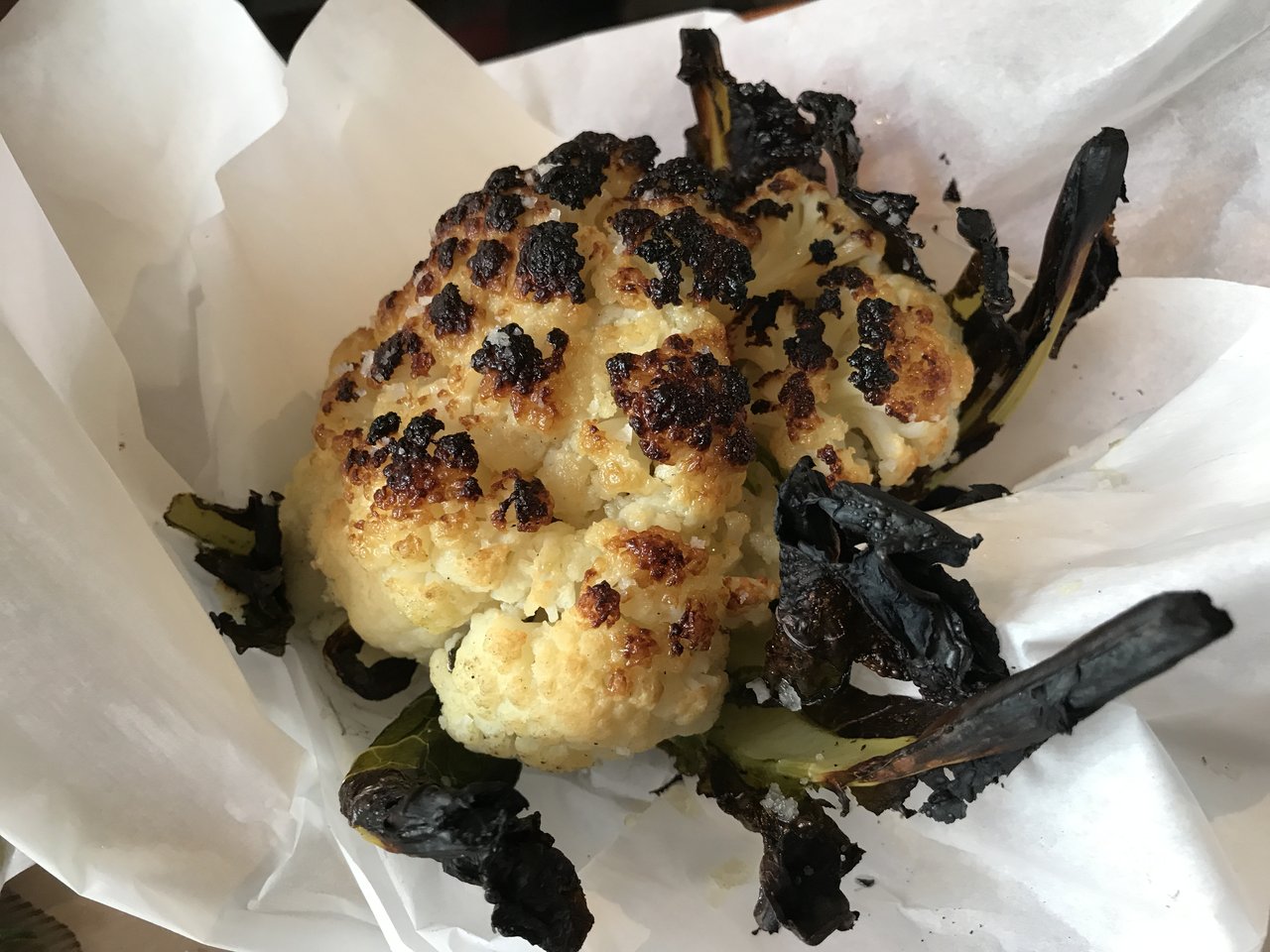 Green beans from Jericho, roasted cauliflower, melt-in-the-mouth lamb, juicy hamburgers all curated by chef Eran Cohen. Every now and again Eran will fill a pan with sage put it on fire to cleanse the air.

Everything is freshly cooked and it has to be because there is no freezer. They buy it, they cook it. At night it’s all go with loud music and dancing on the bar.

Located right on Alma beach, there is no better place to enjoy a sunset dinner than in this round-shaped restaurant. It’s an extensive menu which is all the more delicious with a sun setting backdrop. 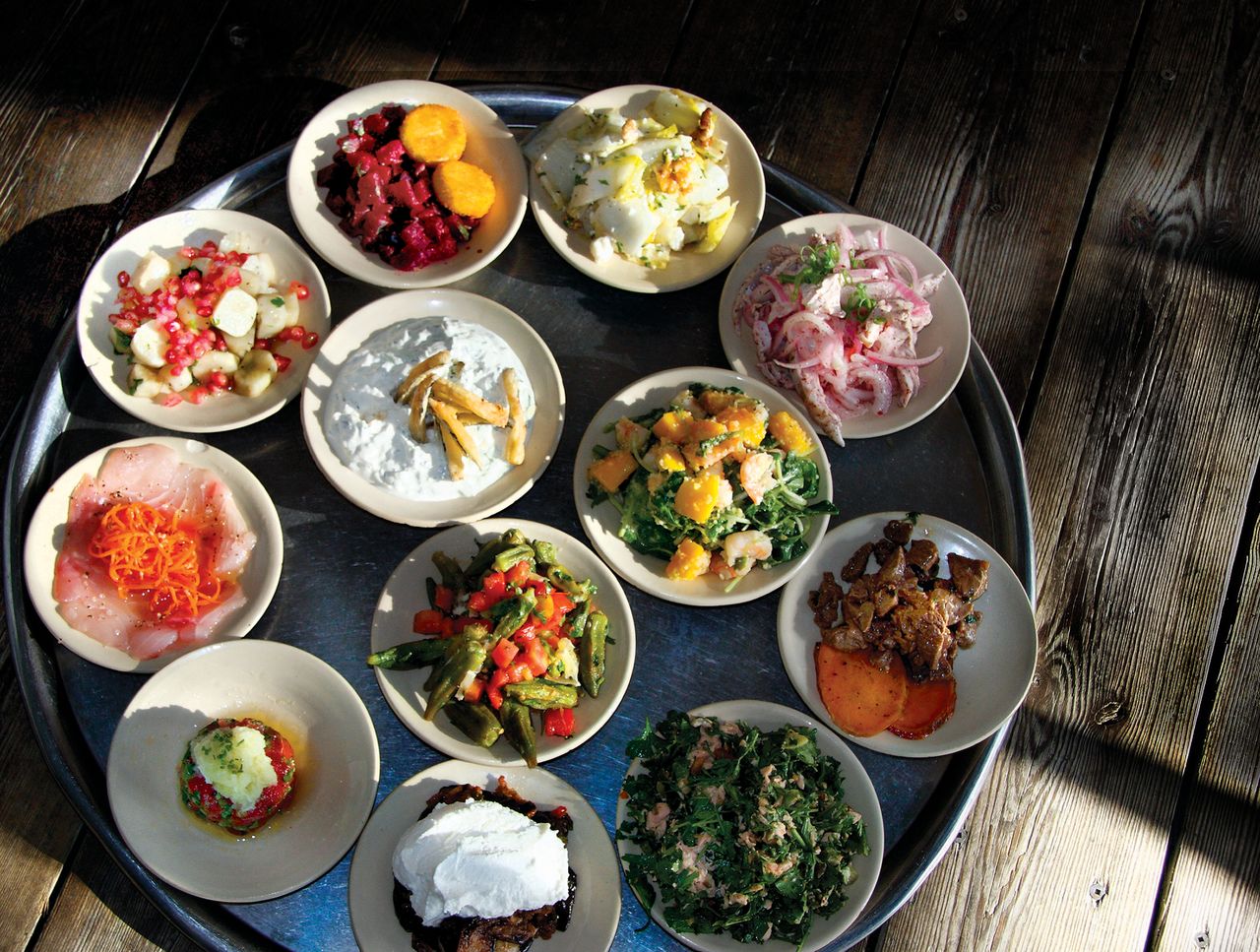 Start with a range of tapas – you get to choose the ones you want for a large platter they present to you – then move on to lamb, vegetarian or fish dishes. It’s mad busy at night yet the staff maintain a fun demeanour. Make sure you book.

If you love whiskey do not miss a night out at this bar-restaurant-museum. Located in an underground Templar cellar the walls are lined with 1,000 whiskeys from Ireland and Scotland of course, but also from far flung places such as Taiwan and India.

Take a seat by the bar for a more personal experience – especially if you are a newbie. You will be served by waiters dressed in black who look elegant against the wall of orange hued bottles. You get to taste several whiskeys served in 25-ml tasting doses in Glencairn glasses highlighting the aromas and flavours of the tipple. The bar tender has the mission of finding one to suit your palate. For the uninitiated the mellow Haig Club is a good starter. 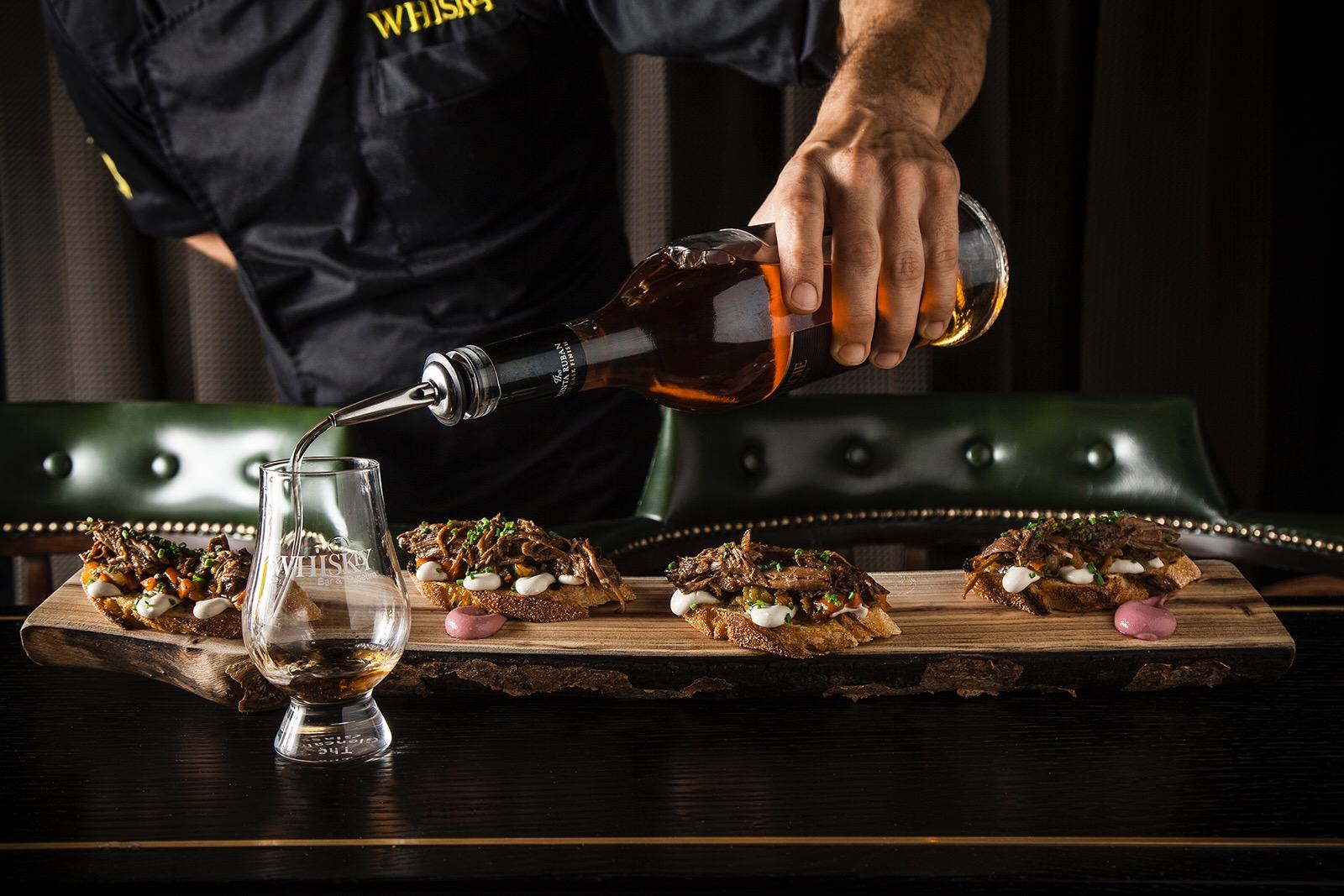 Food is stylish yet simple; smoked meats, fresh fish and vegetable entrées and often comes with whiskey notes. Ask about the right whiskey to match your meal. 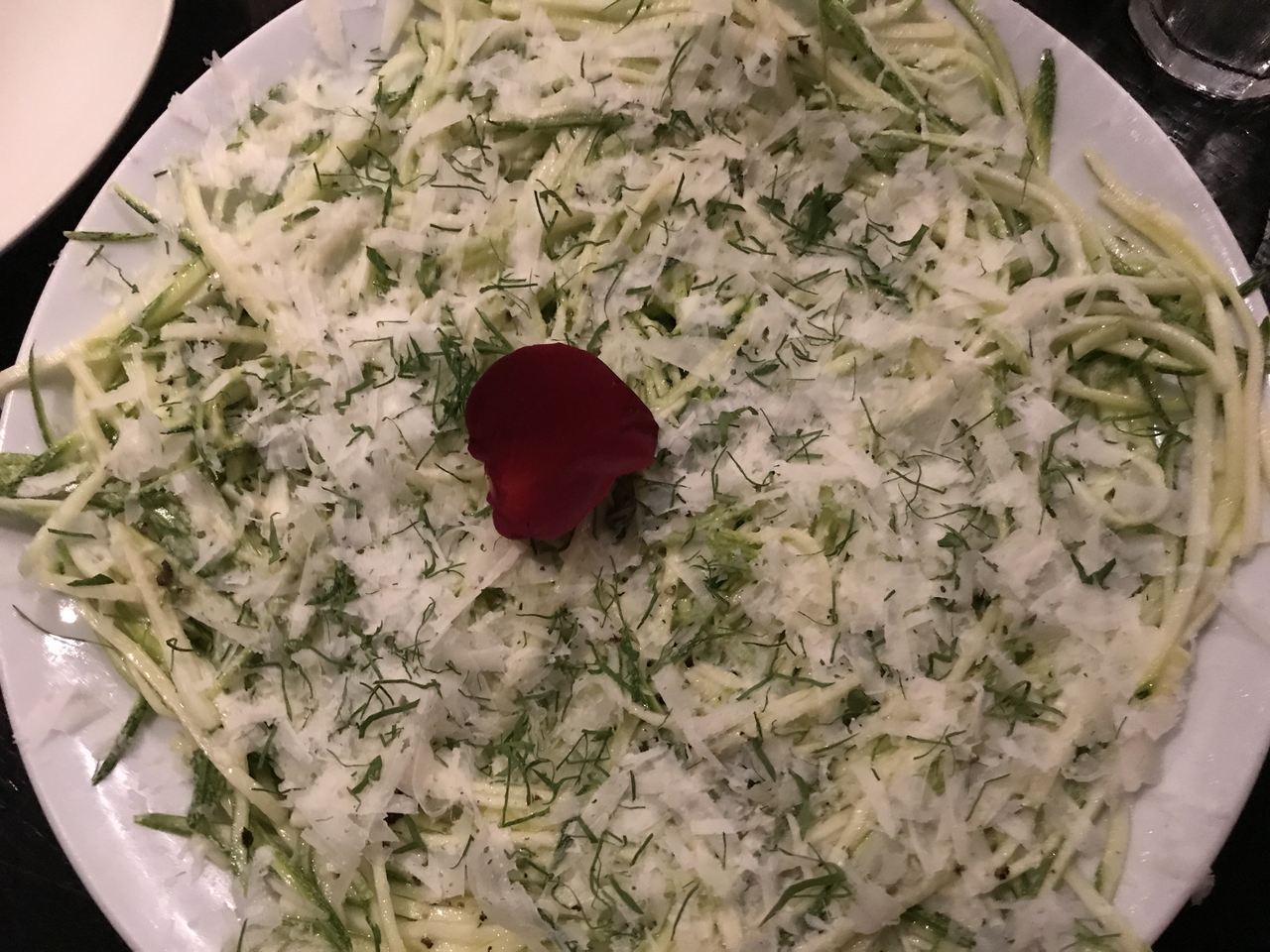 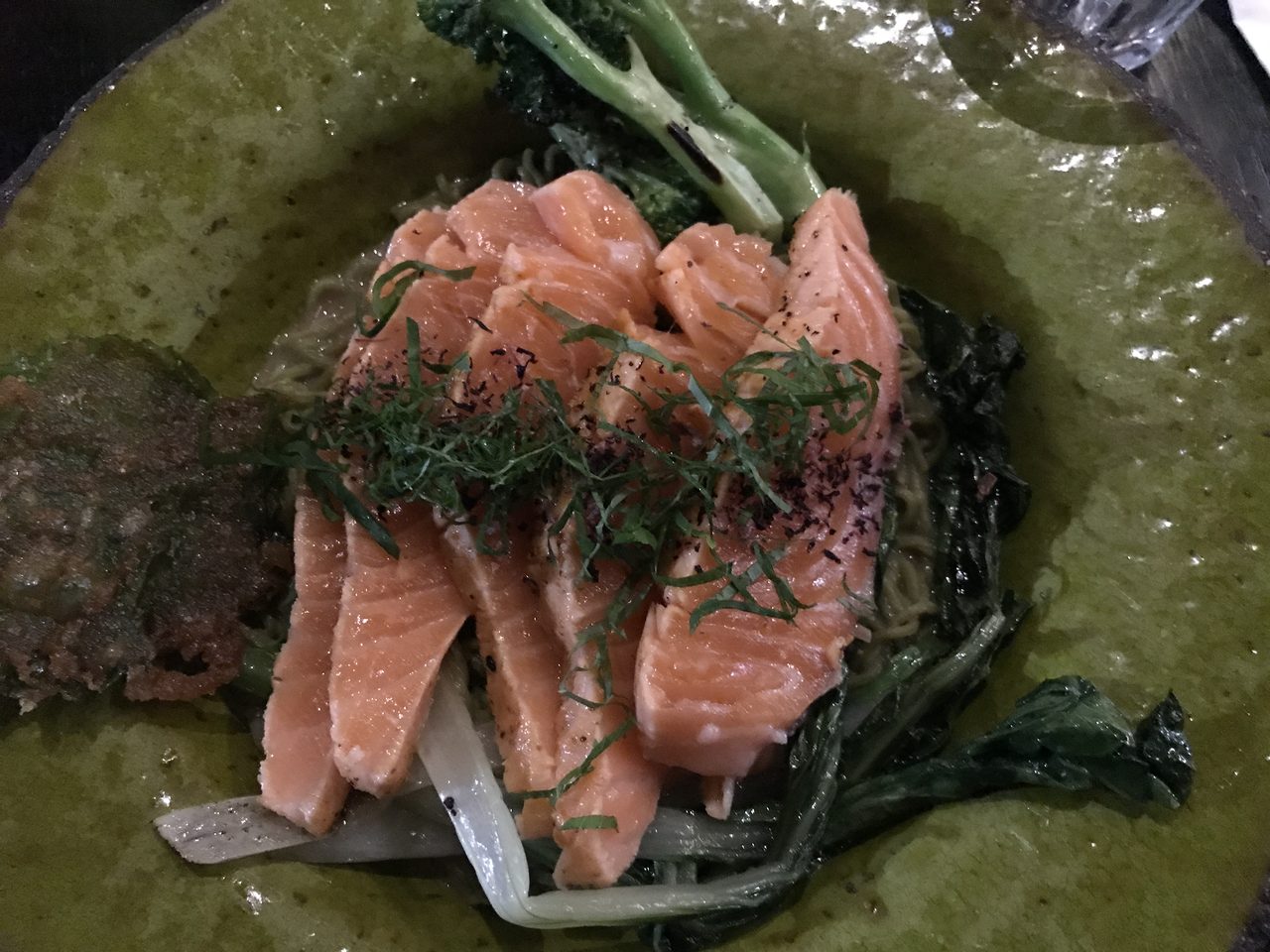 At Oasis, American chef Rima Olvera ditches food trends because she has her own ideas about cuisine all created in an open kitchen. Hers is not fusion cooking but a thoughtful working of ingredients to create her take on international dishes. These are labelled with airports that depict the country they hail from. As ingredients come and go with the season, the menu changes regularly but staples include a tangy zuchini salad and a salmon gravallax.

But also expect octopus, sea wolf and other seafood delicacies and even a Fake Porcinis – giant mushrooms with porcini essence, salt and Italian parmesan. The ambience is somewhat minimalistic with a backdrop of browns and muted colours. Behind there is an appealing garden restaurant with an ancient olive tree and lovely water feature.

Intrigue and Cocktails at The Bellboy, Berdyczewski St 14 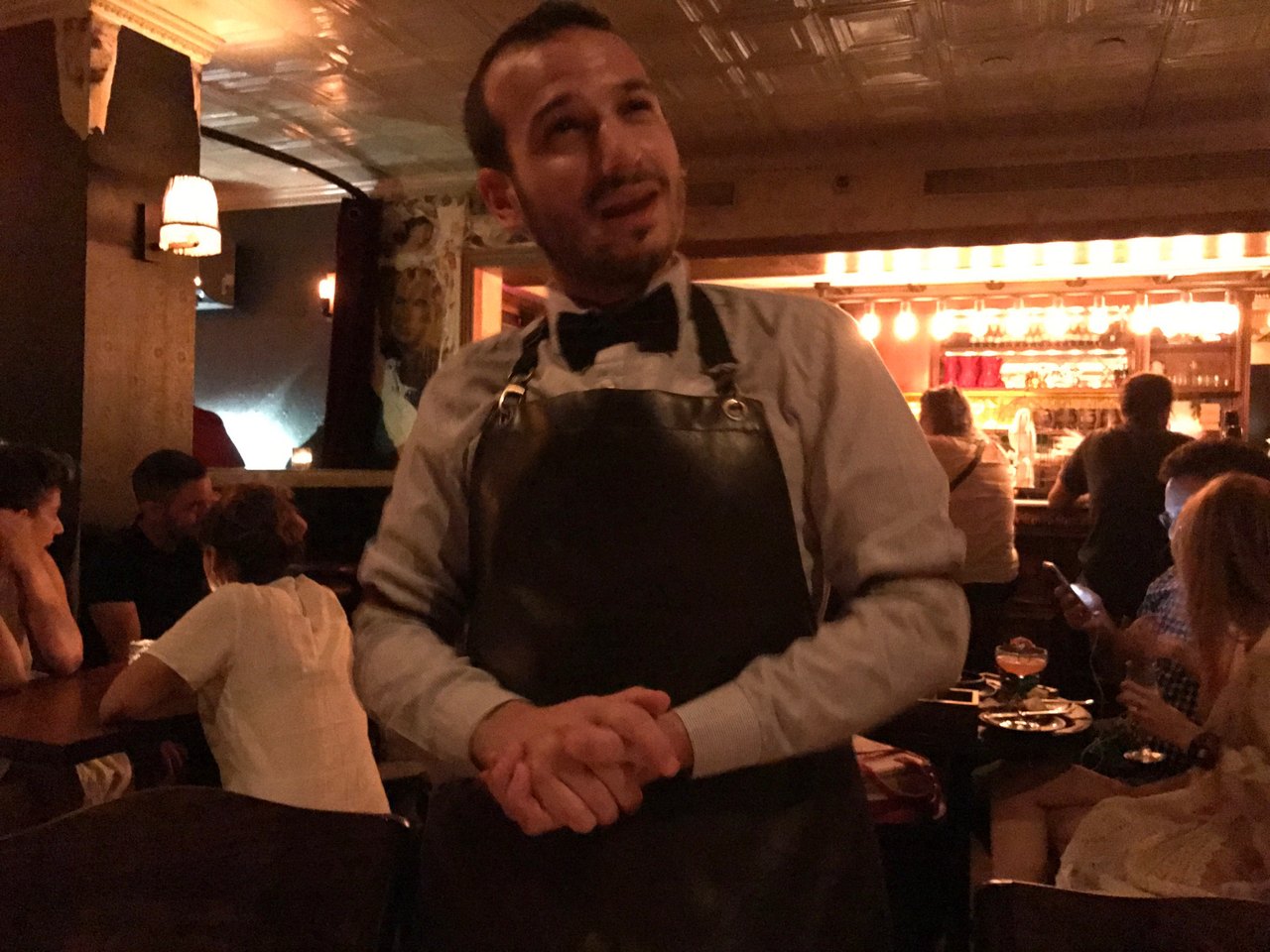 Taking your order at Bellboy

Located discretely in Hotel Berdichevsky punters wait in a small reception till someone comes to take you in. Inside it’s dark much like a speakeasy might have been. There’s not much of a menu but there are 16 speciality cocktails served by eccentric waiters while swing music plays in the background. Every now and again a waiter will pass with a pram carrying booze you get a vodka shot that you drink out of an oyster shell. It’s gritty, superficially grungy and still stylish and chic.

A night out drinking could end with the munchies and Tel Aviv has its selection of simply sensational eateries. Tony Vespa on 140 Rothschild Boulevard (in the White City) offers ready made pizza by the weight, so you can choose a several different types of slices. Otherwise its Vitrina’s on Lilienblum St 40 for truly delicious hamburgers or stuff a pitta with street food at HaMiznon on King George street or Ibn Gvirol. And you won’t be alone, there will be queues. 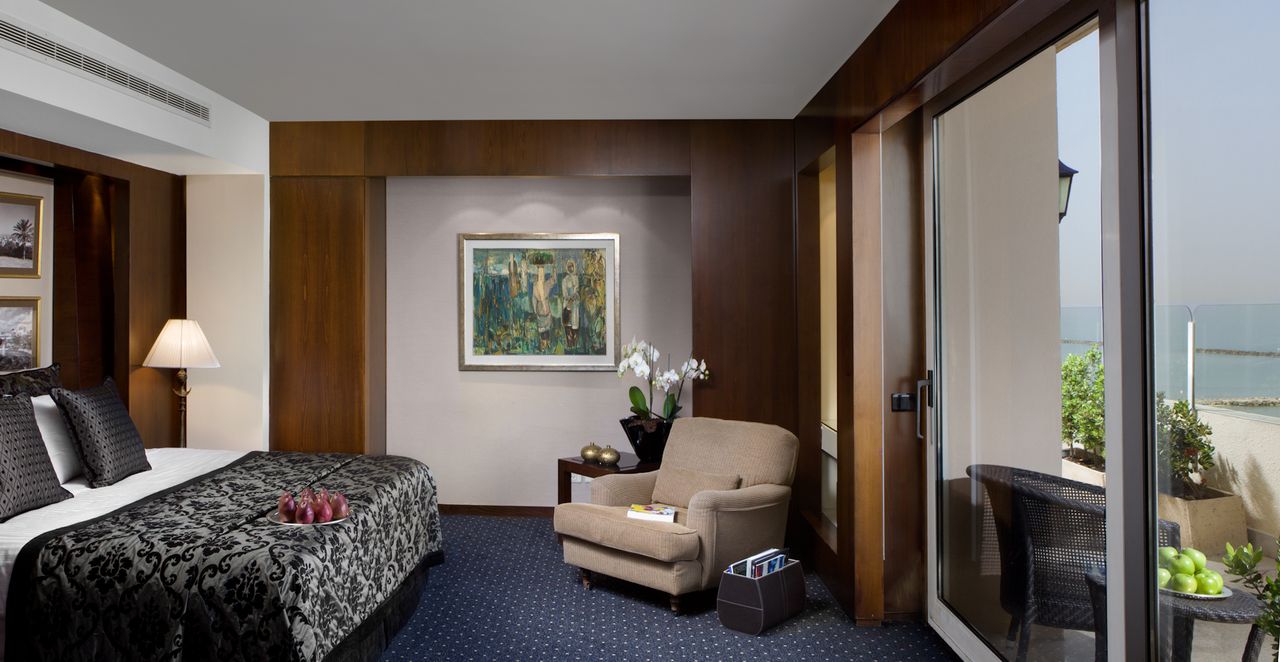 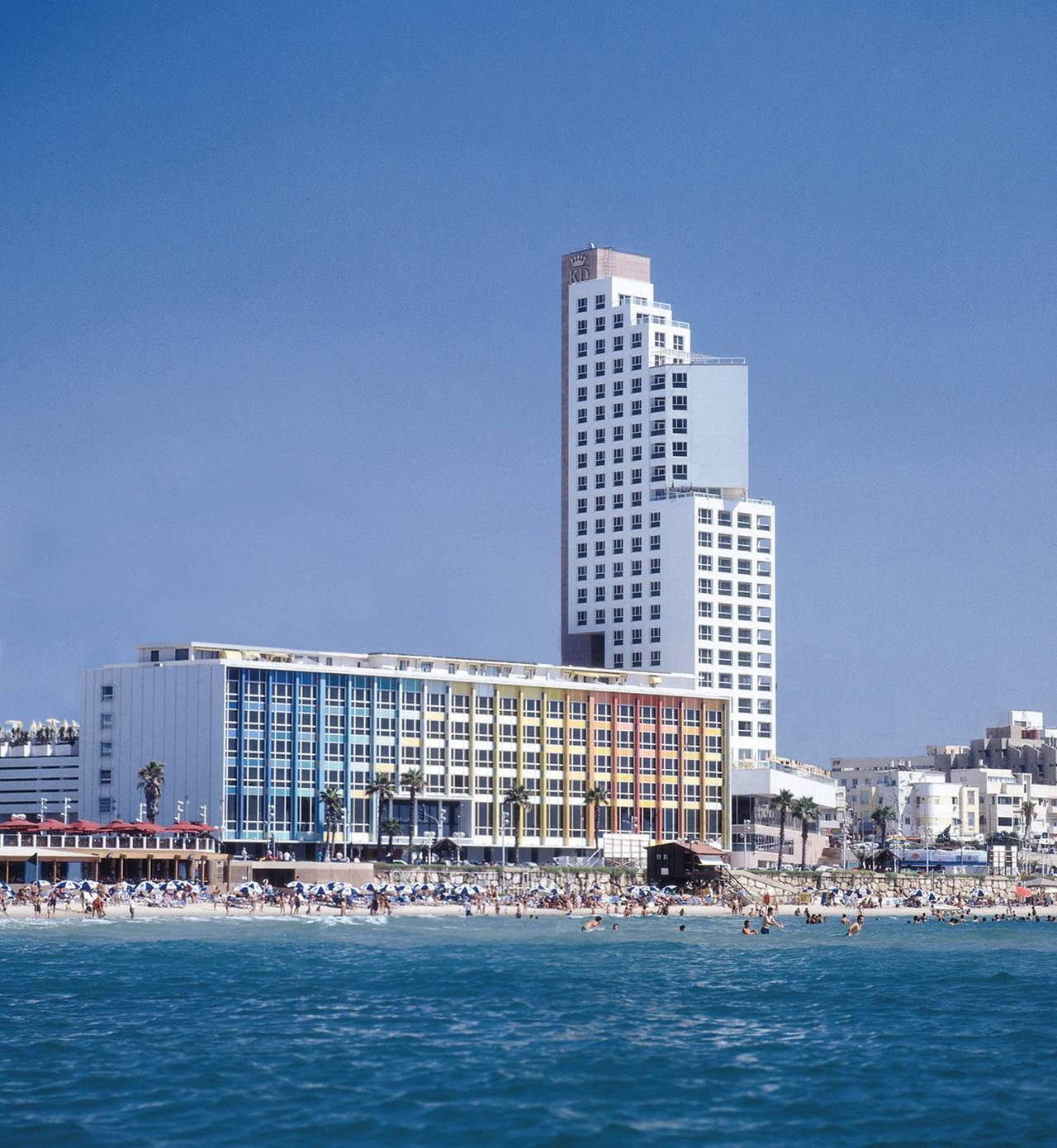 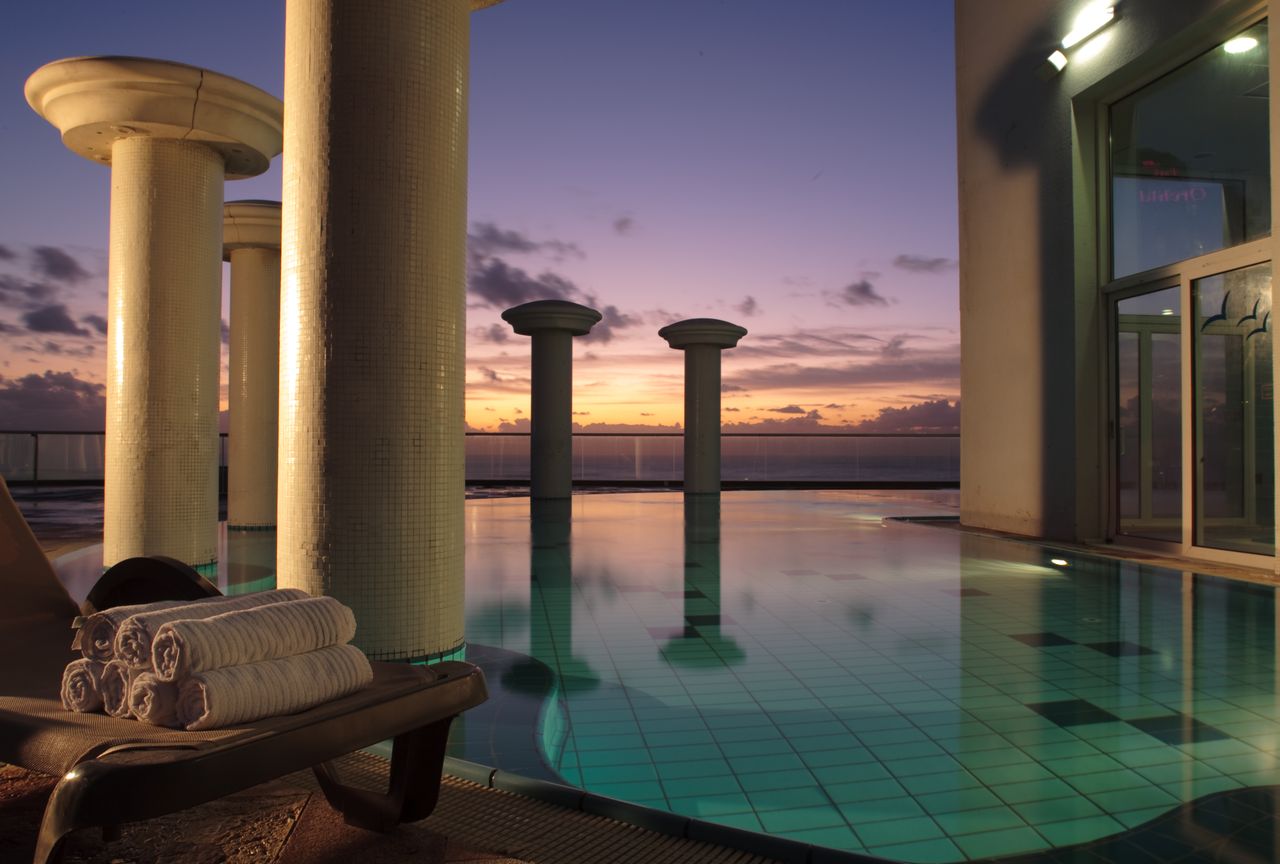 Our review: “A stylish, upright hotel in a slightly quirky building, in a central location close to everything the city has to offer.” [read more] 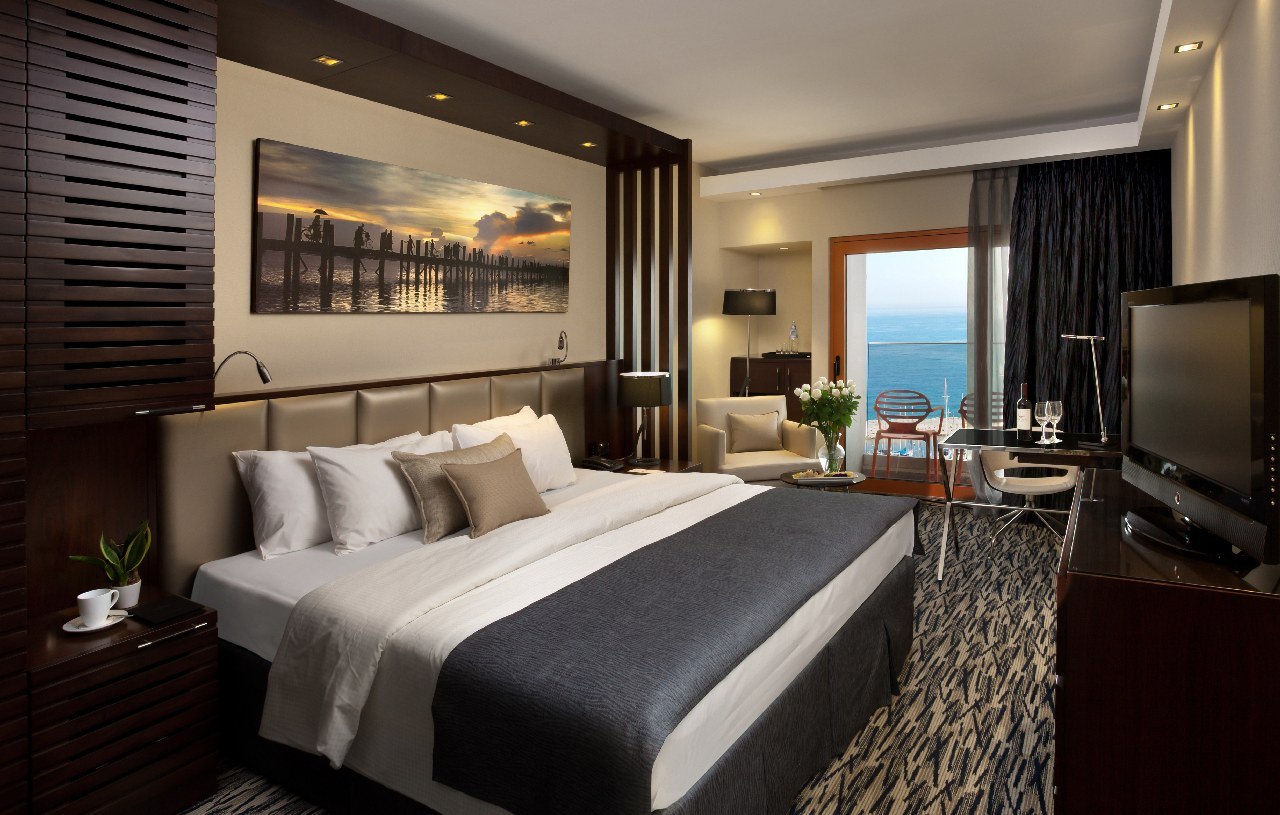 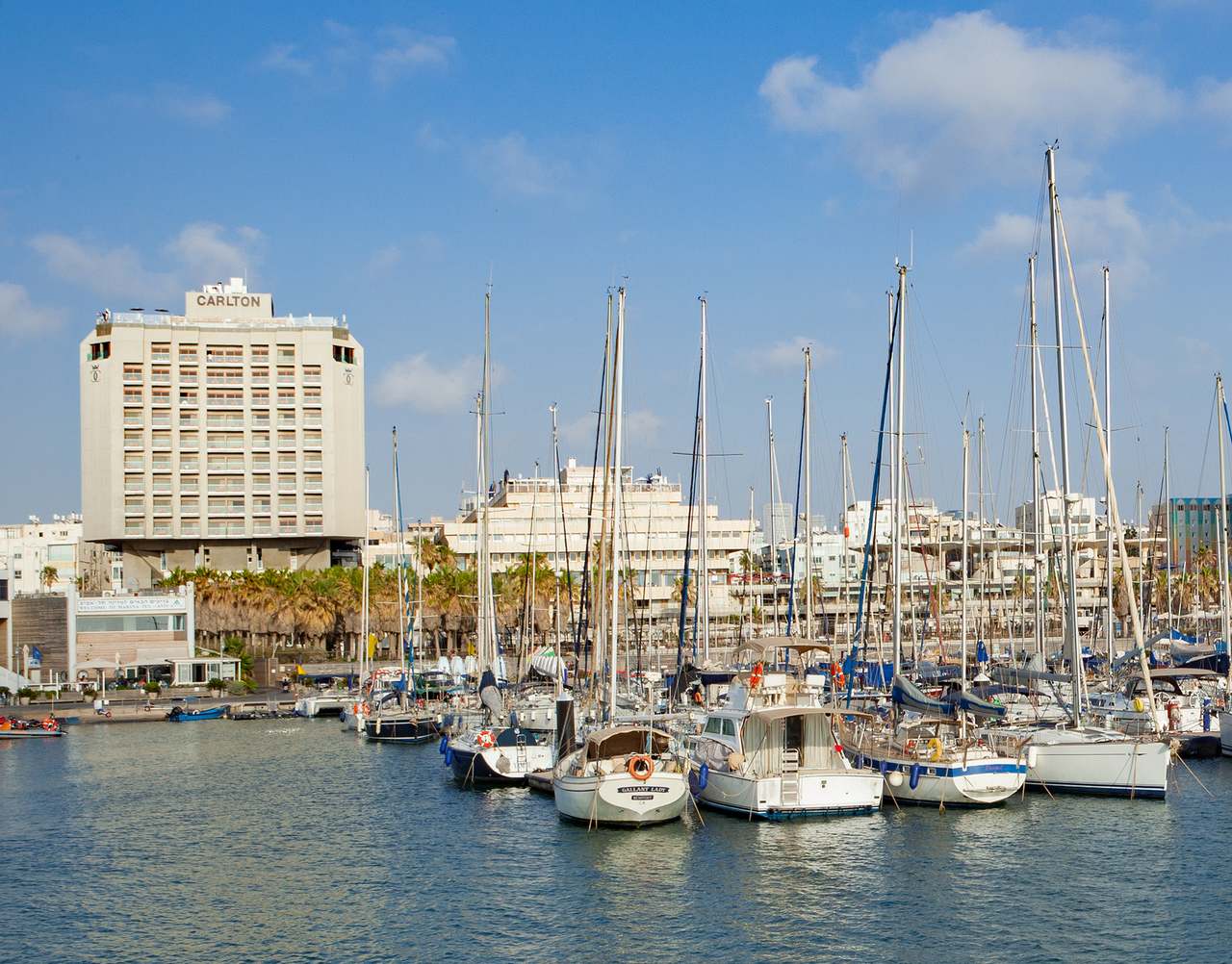 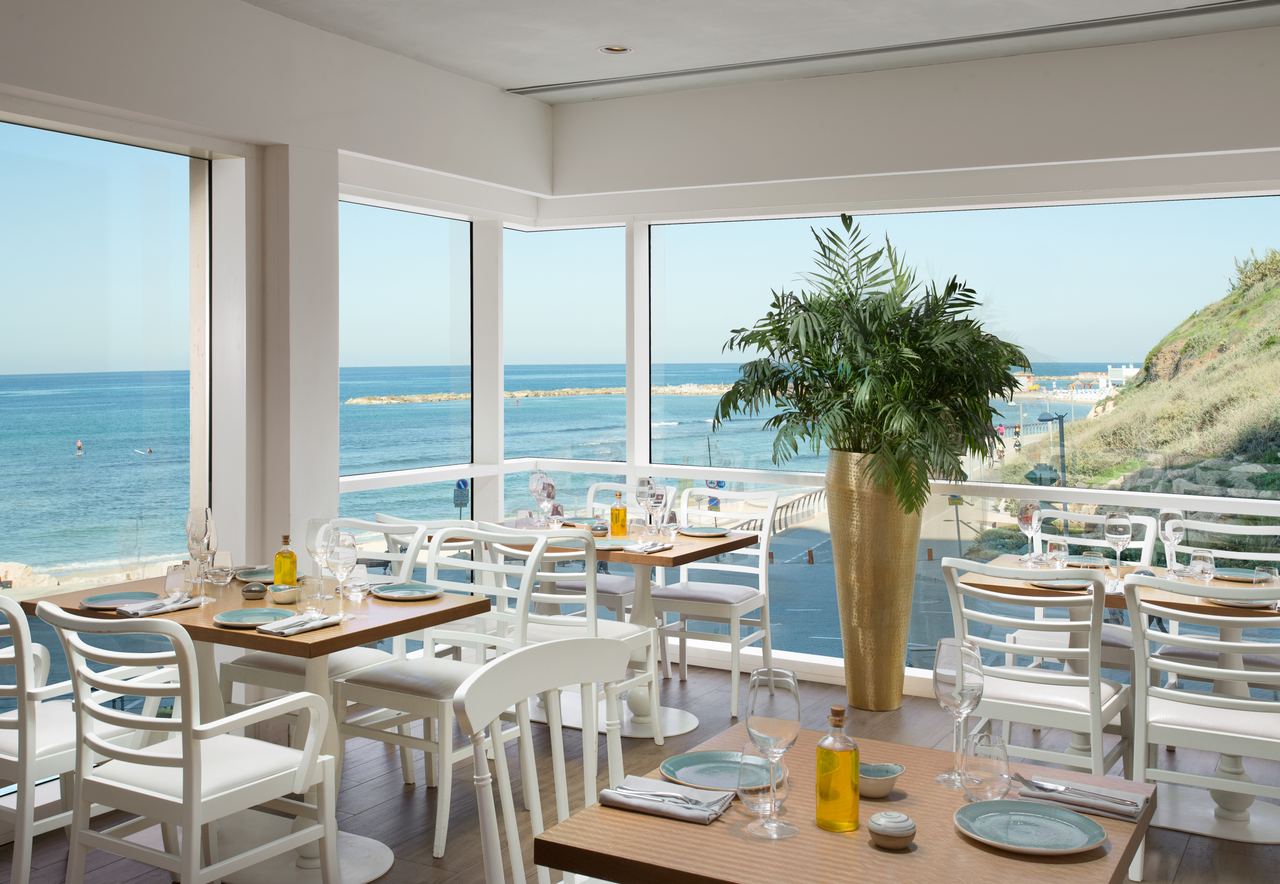 Our review: “Of course it is a matter of taste but those seeking to stay in a large luxury hotel by the sea would do well to spend a few nights here. A unique roof top pool, an fabulous executive lounge and all round good service makes this one a winner.” [read more]

There are plenty of taxis and a frequent bus service. There’s also a shirut service which you can hail down. These small buses carry round 12 people and if there is room they will stop for you.

There are plenty of bicycle stations and this is a popular way to get around. If all else fails, the city is compact and you can walk.