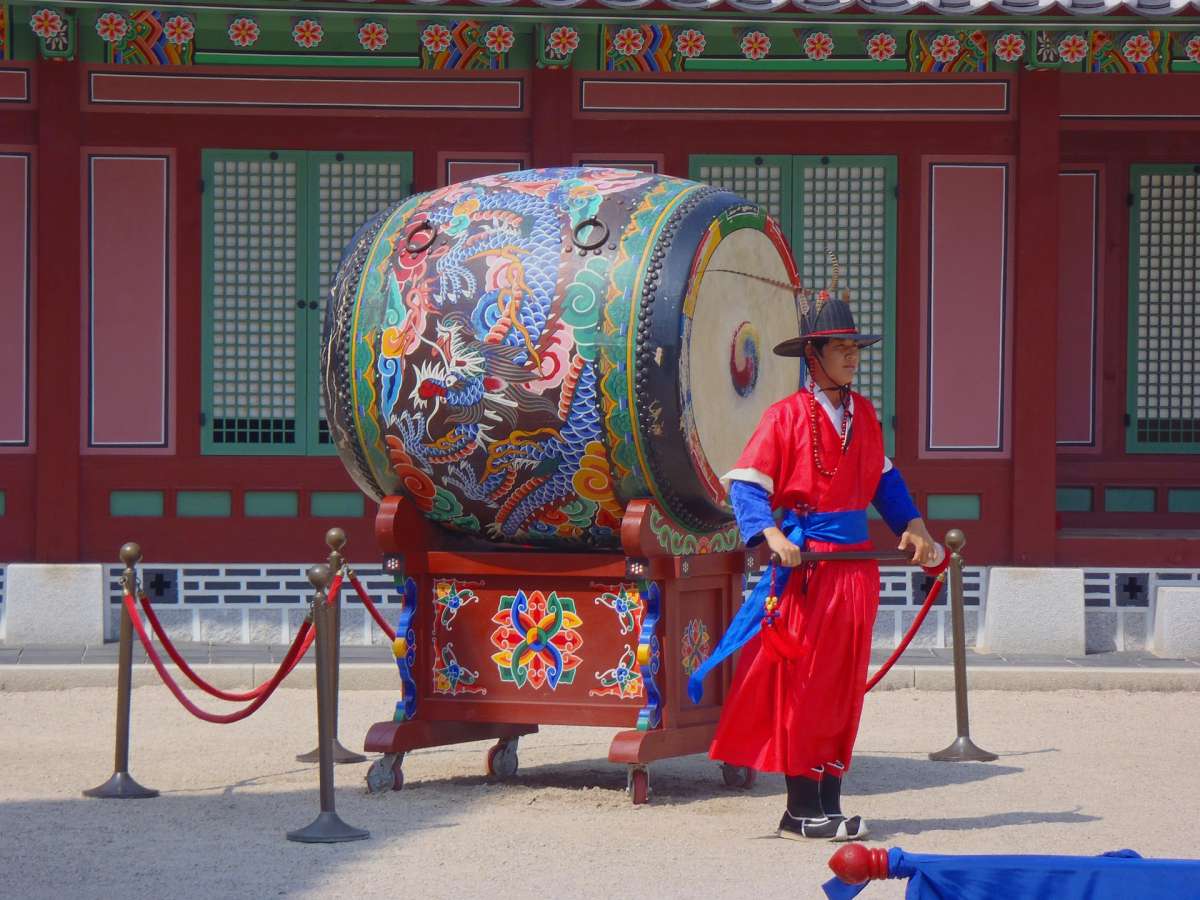 Since the end of the Korean War, the country of South Korea has been continually progressing towards its current status as a global economic force and major player in the worlds of technology and culture. Currently there are around 10 million inhabitants in Seoul, making it one of the world’s most densely populated cities.

The Han river provides calm, placid views in an otherwise cluttered city. It flows through the city with twenty-nine bridges that span its waters enabling people to shuttle from north to south of the city via trains, buses or cars.

One of the Seoul’s accolades is that it is home to four UNESCO World Heritage Sites: Changdeokgung, Hwaseong Fortress, Jongmyo Shrine and the Royal Tombs of the Joseon Dynasty.

Here’s a round-robin of what to do when you get there:

Glimpse Seoul’s 600-year-old history and culture at one of the five royal palaces built by King Taejo at the end of the fourteenth century. 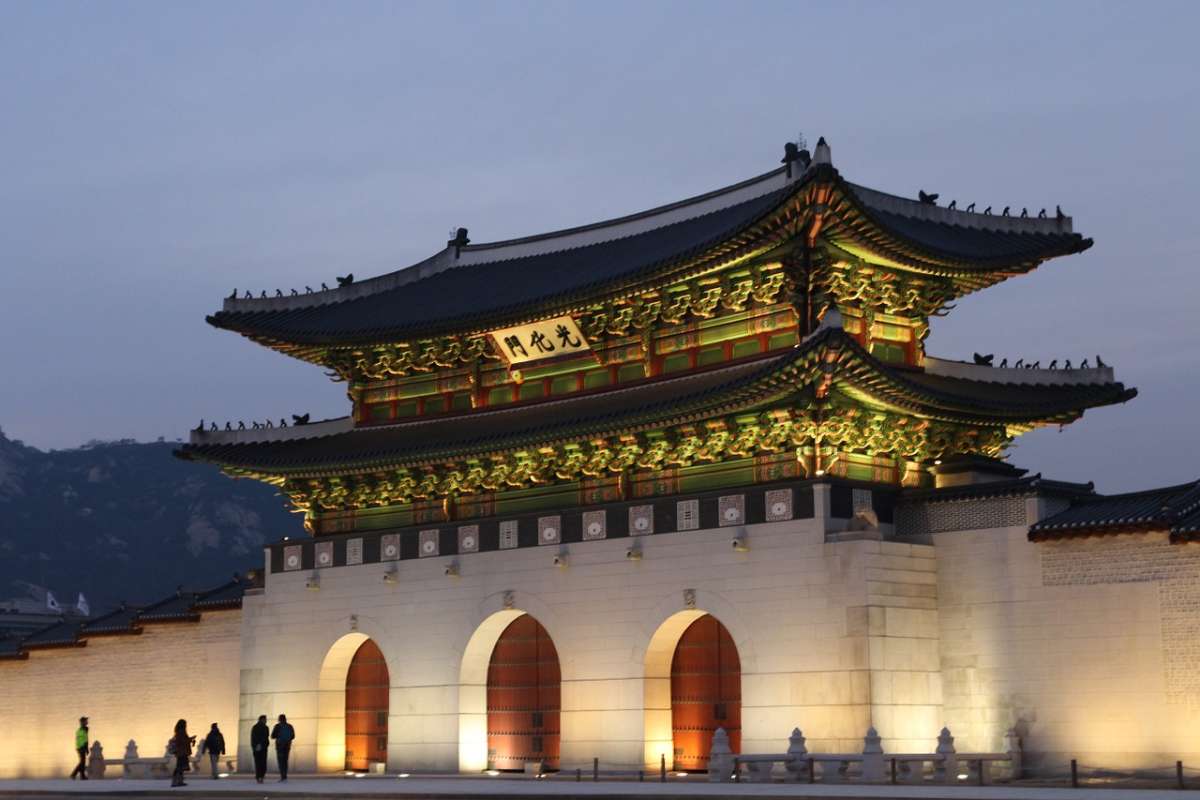 Gyeongbokgung Palace, or the Palace of Shining Happiness, is considered one of the grandest. It is located on the city’s main boulevard, Sejongro, close to the Blue House, the President’s residence. It was built in 1395 and is a stunning complex. A walk through the grounds of this Joseon Dynasty palace is a walk back in time. It is connected to the Jongmyo, a Cofucian shrine to kings and queens of the Korean Josean Dynasty. English tours can be booked in advance, or simply look out for one of the ‘greeters’.

Located inside the palace is the National Folk Museum. It comprises three tall interconnecting buildings and they house artefacts, relics and paintings from the different periods of Korean history ranging from pre-history right through to occupation by the Japanese. Entry is free. Metro line 3, Anguk Station, exit 1

Seoul is considered to be the most wired city in the world but most people don’t know that South Koreans were enjoying touch screen cell phones and video calling long before Apple launched the iPhone. One of the greatest examples of South Korea’s dedication technology is Digital Media City. A former massive city dump was paved over in 1993 when the height of the landfill rivaled Seoul’s neighboring mountains. In 2002 it was transformed into a sprawling network of buildings housing everything from major technology and communications firms, like LG, to museums and apartments.

This market was established in 1927 and today remains Seoul’s oldest and largest indoor seafood market. Over 800 vendors sell the day’s catch, which ranges from delicious to downright curious. Noryangjin is a great place to sample some of Korea’s most famous seafood dishes. Purchase any item from a vendor and have it prepared for you at one of the numerous restaurants located in the basement and on the second floor. If you’re really looking for an authentic experience, order Korea’s famous sannakji (live octopus) and pair it with a bottle of Soju. The market is worthy of a visit, if even just to take in the sights, sounds and smells of the massive facility. Seoul Metro Line 1.

Gwangjang Market was Seoul’s first market. Today, its second floor serves as a massive textile market, but the real draw is the food vendors packed throughout the main floor. Gwangjang Market is one of the best places to sample Seoul’s eclectic street and snack food options. Be sure to keep your eyes peeled for the famous saxophonist who is often filling this lively market with his music. Seoul Metro Line 1 or 2.

Namdaemun Market is Seoul’s largest traditional market. Open daily around the clock, it is massive and hosts over 10,000 vendors spread through a maze of intertwining streets. Many of the shops sell handmade items. From leather belts, jewellery to ginseng, the market has a little bit of everything including camping gear. Though it is very crowded, and you will get bumped around, it’s a great place to wander, people watch and perhaps pick up a souvenir at a bartered price. Seoul Metro Line 4 to Hoehyeon Station. Tourist information line: 02-752-1913.

The Electronics Market, great for gadget nuts, has over three thousand stores housed in over twenty buildings (as well as bootleggers in tents) open from 10 til 7.30, with discounts of up to 50% over other retail outlets. You could build a computer from scratch and buy all the games you could ever want to play on it. Don’t forget to haggle if you want a great deal; some vendors will drop prices drastically, while others won’t budge.

You’ll find everything from Korean antiques and taxidermy to military paraphernalia and all kinds of randomness. While amongst these treasures, take a minute to try some fresh honey tea that’s made with honey fresh from the comb. If that’s too sweet try a refreshing concoction of milk, Korean red ginger, honey and a plant mountain ma.  Places like these have a lot of historical significance in Korea and this particular market has been moved around more than once in its 100+ years of existence. Who knows how long it will stay in its current form, so enjoy it while you can and don’t be surprised if you are the only foreigner in the place. 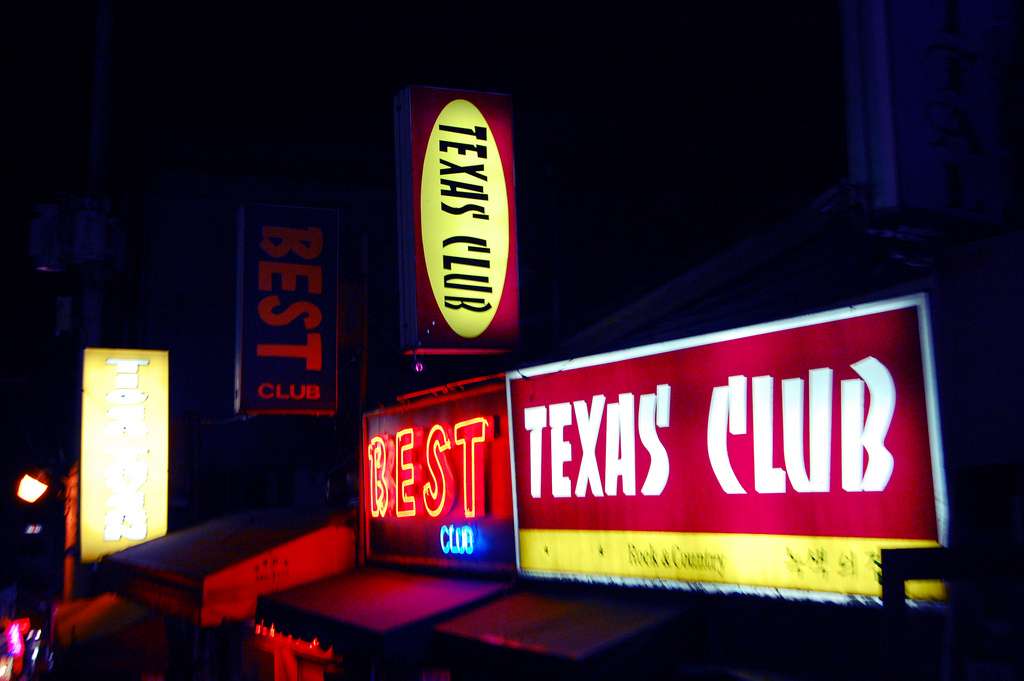 If you are in Seoul long enough you will likely end up here at least once. Situated near the main US army base in Korea, Itaewon attracts both foreigners and locals alike. Trendy restaurants, imported food stores, nightlife and shopping are just a few of the many reasons so many people flock to this part of Seoul. It might not be the most traditional of places but it’s a prime example of the way foreigners have weaved their way into the fabric of Korean society and what makes expat life in Korea different from anywhere else.

Between Namdaemun market and the Myeongdong shopping areas is Shinsegae’s flagship downtown store. It is the place to go for top notch, if expensive, shopping. Join Korean women in the basement, in buying prepared dishes and fresh fish at the end of the day. Be sure to sample Korea’s beloved kimchi, a spicy cabbage normally fermented in huge jars dug into the earth. Upstairs, you can buy the latest designer shoes and clothes. For time out, visit the store’s roof garden. Metro line 4 to Hoehyun Station. 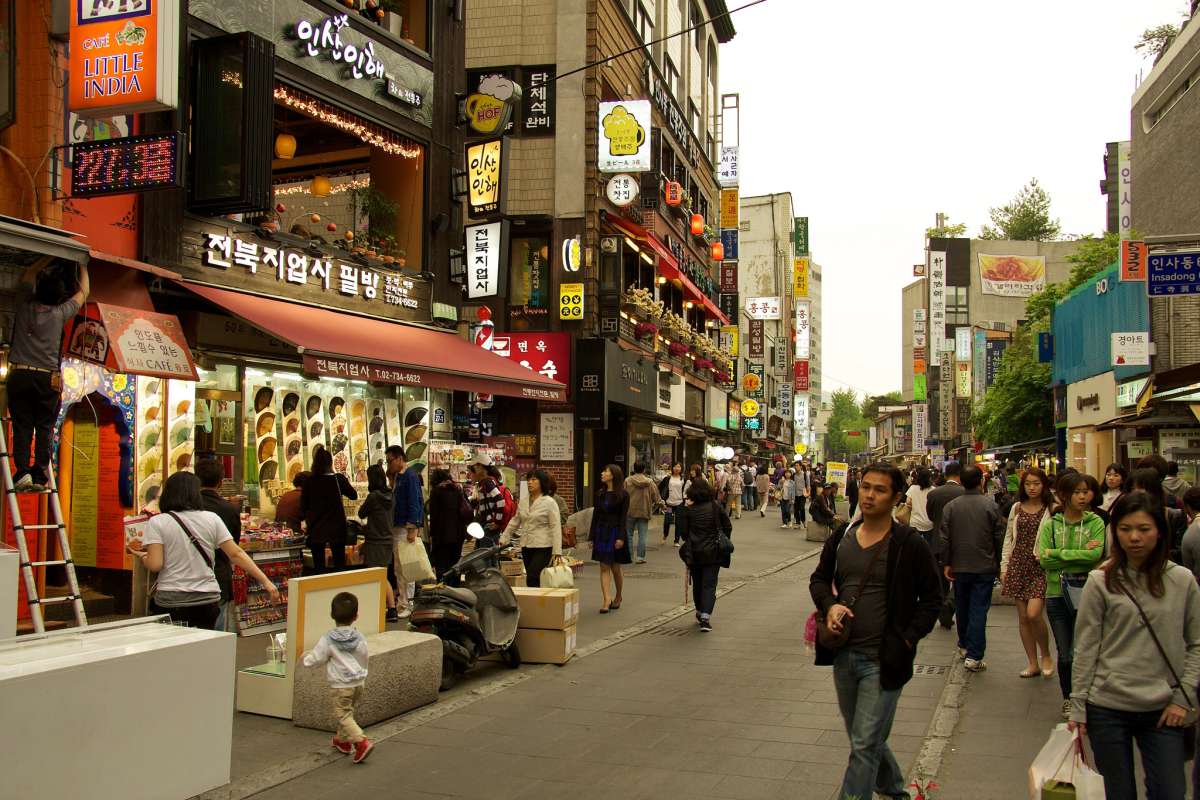 This is arguably one of Seoul’s most famous and historic thoroughfares. The main street and the alleyways intersecting it are a great place to window shop Korea’s culture. Storefronts are flanked with hanging calligraphy paintbrushes and have Korean traditional paper (hanji)
and the Korean traditional dress (hanbok) for observation or purchase. Be sure to visit one of Seoul’s famous tea houses or sample Buddhist temple food. Seoul Metro Line 3.

Go to the theatre

Chongdong Theatre, in the heart of downtown just around the corner from Deoksugung palace, offers a spectacular, dynamic show of traditional dance and music every day at 4pm and 8pm except Mondays, as well as the opportunity to try out royal costumes for yourself.

In the last few years, energy-filled and highly accessible ‘non-verbal’ shows have been entertaining international audiences. Nanta combines cooking with drumming in a comedy that sold out for a month at the Edinburgh Fringe, while Jump turns acrobatics and Korean martial arts into fast slapstick humour for all ages.

Relax in a spa

Chill out in a bath house or jjimjilbang. Dragon Hill Spa is a popular one but most neighbourhoods have a spa and many are open 24 hours with a very modest entrance fee. You can even sleep in some of them – popular after a long night of drinking. Just ask at your hotel for one nearby.

The city is ringed by mountains and one of the best things in South Korea is the hiking in national parks where you can also visit working, traditional Buddhist temples.

Bugaksan, is the highest and most well known of Korea’s mountains. While there you can also visit the nearby Cheongwadae or “Blue House” where current President Lee Myung-Bak lives.

Bukhansan National Park is accessible by a metro ride and then a bus or taxi to the entrance. You can choose a short trail and get to see how many city dwellers spend their leisure time. 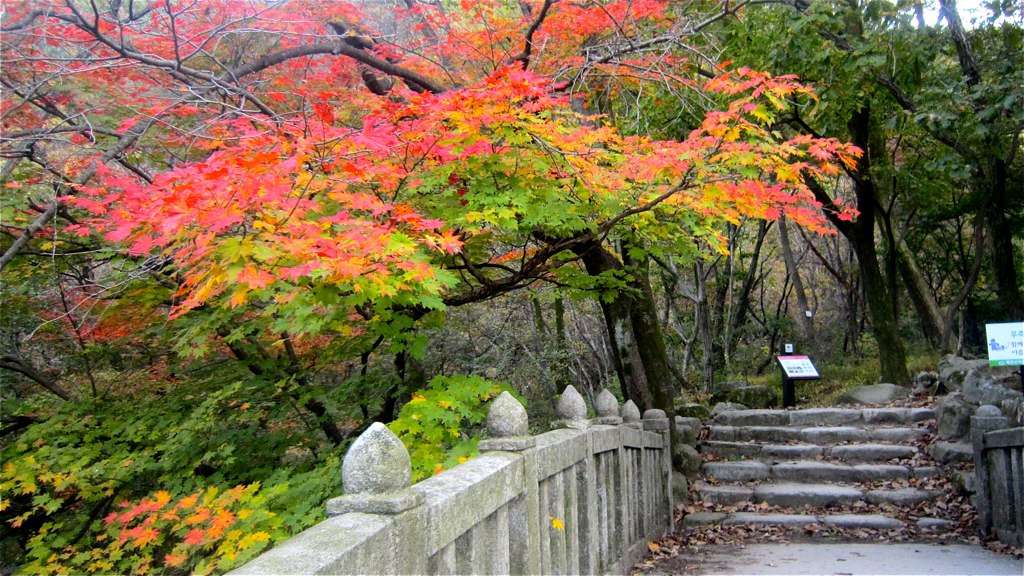 Seoul Seonggwak is a 18.7 km fortress encompassing inner-Seoul. The fortress connects the four cardinal mountains of the city, Inwangsan, Bugaksan (the peak behind the Blue House – home of the president), Naksan, and Namsan. The hike will take a day and requires some endurance. Walking Seoul’s fortress will take you through quiet neighbourhoods and provide aerial views of Gyeongbokgung Palace. The hike is free but on site registration is required with a passport. Seoul Metro Line 3 or 4.

It is also the place where you will find the world’s highest art gallery, an aquarium, wax museum, convention center, restaurants overlooking the city and a state of the art IMAX theater. The 63 Building also known as 63 City is a great spot for those traveling with younger children or those young at heart.

The state-of-the-art National Museum of Korea, the largest in Korea, houses masterpieces including a massive marble ten-story pagoda, a gold crown from the 5th century and stone dagger from the prehistoric period andlarge Buddha statues. It is arranged over three floors and has several restaurants and coffee shops. The surrounding grounds are a park with a large Reflecting Pool. Get there via subway and exit at Ichon subway exit and walk over about 400 meters to the museum. Entry is free and an audio guide costs 1000 won.

Fun by the river

The Cheonggyecheon was once a natural stream running through the heartof Seoul. In the 1950’s it was paved and made into a highway. Today it has been restored beyond its original state. The Cheonggyecheon is 8km long and its banks serve as a gallery for an array sculptures, architecture, fountainsand art. Through the year it plays host to a myriad of festivals and exhibitions, as well.

Insider tip: several tour options are available, but to truly experience the Cheonggyecheon, opt out and explore it at your own pace.

You can follow it through varying neighbourhoods all the way to Seoul Forest. Seoul Metro Line 1, 2, 3, 4, or 5.

The city’s newest attraction is Seoul’s islands. There will be three in all when completed and will float on the surface of the river using an enormous buoy secured in place by 28 mooring chains, a design which ensures it can withstand changing river levels and bad weather.

The fist islet is 3,271 square meters, it is the second-largest of the three and is home to a three-storey structure housing a 700-seat convention hall and several other attractions such as restaurants and video games. There are parks, outdoor terraces and viewing points surrounding the center, while at night, the exterior of the building is illuminated with brightly colored light shows. 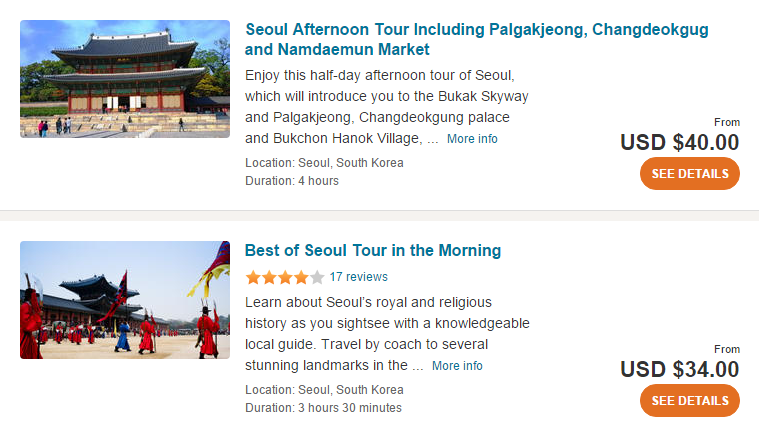