Travel guide to visiting Rome with your dog 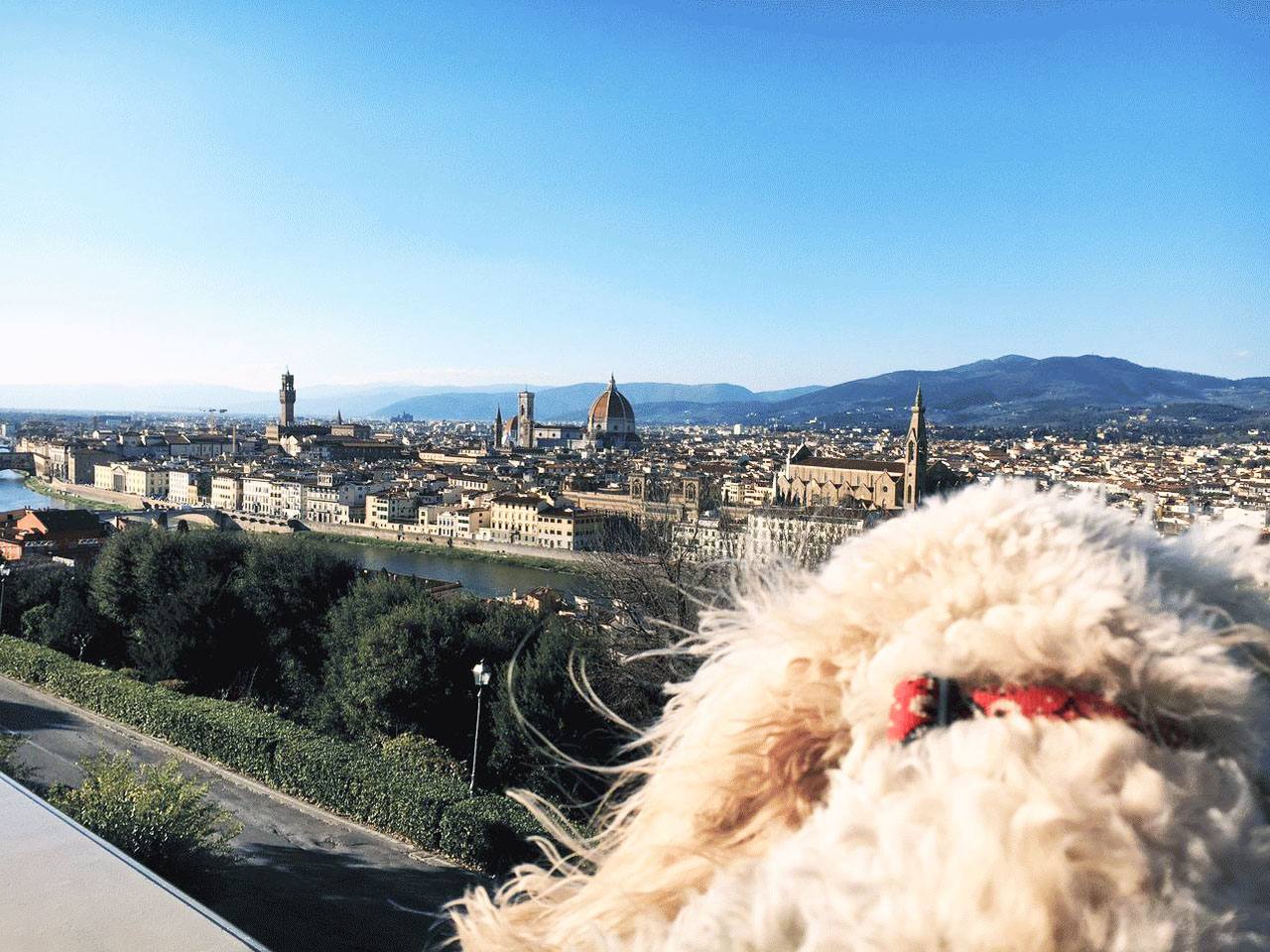 Being English, it was always a question of politeness. We’d already tested the phrase on Mauro, the Sardinian owner of The Good Bear Café in Bath. He’d reacted with nods of approval, so we knew it would work, even if the accent still needed a bit more espresso.

Cafes, restaurants, even some supermarkets were clearly open to the obvious charms of our miniature Golden Doodle dog Riley who seemed to smile at every opportunity.

We’d arrived in Rome in late February, after a two-day drive through France, Switzerland and then Italy. Riley had taken the long journey in her stride, curling up in the back or occasionally propping herself up, to look out of the window. She did this for most of Switzerland, clearly enjoying the snow-topped mountain views.

One of our favourite restaurants in Rome is Il Margutta, an arty vegetarian and vegan restaurant on the beautiful Via Margutta, between the Spanish Steps and Piazza del Popolo. We’d almost assumed Riley would not be allowed and prepared ourselves to eat alone but the reality was very different.

Like all restaurants and cafes we visited in Rome, Riley was very welcome. From Origano on Largo dei Chiavari to the Buddy Italian Restaurant Cafè on Corso Vittorio Emanuele II, from Solo Crudo on Via Federico Cesi to Etabli on Vicolo delle Vacche, Riley was always allowed in and often provided with water and a lot of local love.

One exception was the historic and touristy Caffe Greco on Via dei Condotti but that didn’t matter because Rome is not short on great cafes. We spent most mornings drinking a cappuccino in the tranquil caffe at the Chiostro del Brumante, either sitting on the old seats looking over the cloisters or in the adjoining room with sofas and a small window that looks onto the neighbouring church and a Raphael mural. 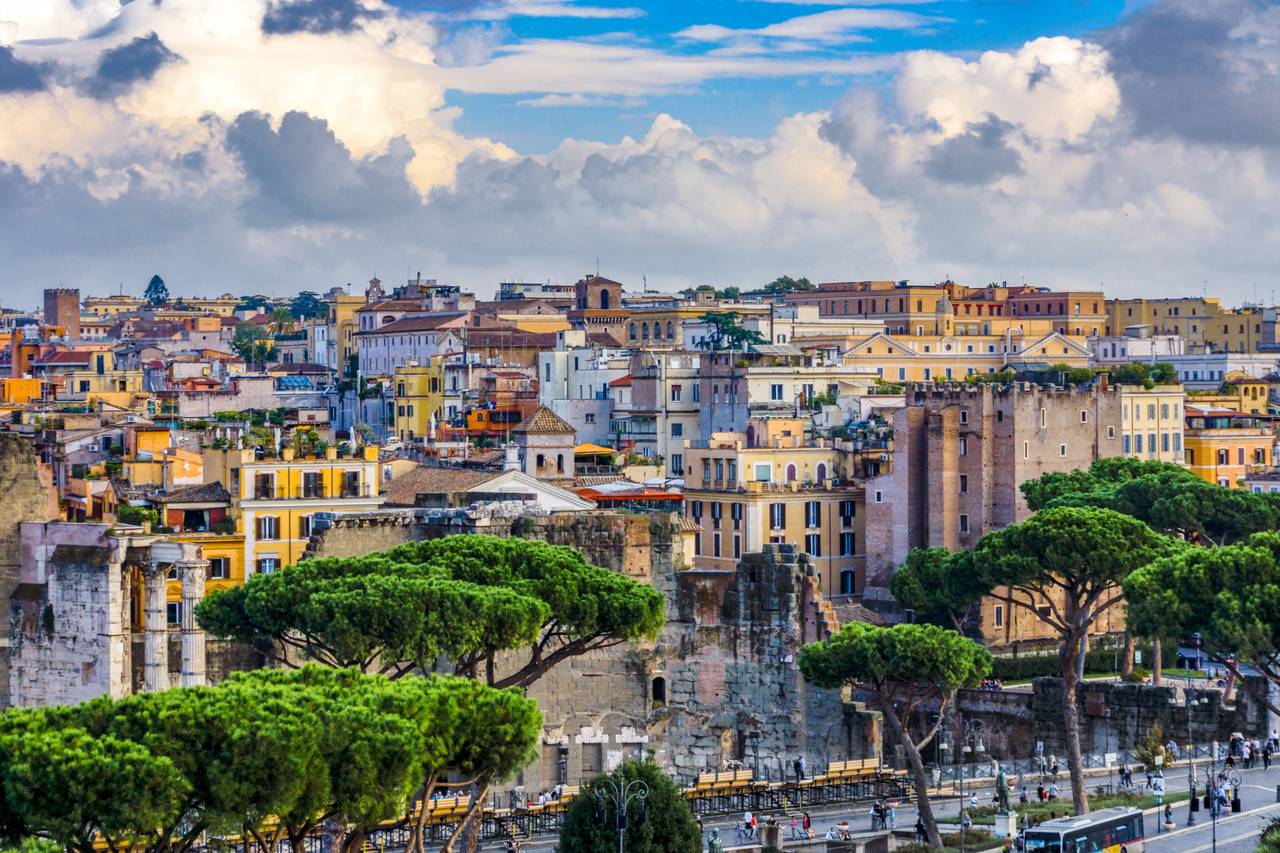 For a rooftop view of the city, we took Riley to the veggie/vegan Mater Terrae bar and restaurant on top of the Raphael Hotel on Largo Febo. The staff here were exceptionally friendly and loved Riley. We drank Vecchia Romagna Italian brandies overlooking Rome’s terracotta rooftops, with views of St Peter’s Basilica and the Vittorio Emanuele II Monument.

One place where Riley was allowed to explore with us was San Giovanni Battista dei Fiorentini, a church by Piazza dell’Oro, where you can see a religious relic, a shrine supposedly containing the foot bones of Mary Magdalene. It’s also home to a couple of Bernini statues. We also took Riley into two other churches without any trouble, the Oratorio dei Fillipini, and the Chiesa di Santa Maria della Pace.

We managed to take Riley into all non-food shops, with the majority of owners or shop assistants keen to say hello. The exceptions were supermarkets, such as Coop and Carrefour Express, although we did take Riley into a Pam Local on the Corso Vittorio Emanuele II. The staff here seemed to enjoy the novelty of Riley and were warm and friendly.

After a few days in the city, we started to make assumptions. We no longer asked if we could take Riley into a place, the only exception being food shops. We did meet one local young man who was walking a Romagnolo near Piazza Cavour, who said that this was the best approach to take in Rome. Assume you can enter until told otherwise.

To be honest, Riley’s not a massive fan of shopping. She was much more at home being totally petted by one of the owners of the excellent rugby bar, Pub Uno Due on Largo del Teatro Valle. A Six Nations game on the big screen and Guinness on tap, she, or at least I was very at home.

There’s a chaotic rhythm to Rome, a sort of theatre that is rough around the edges but embracing and enchanting. Well-dressed Romans of all ages, walk the cobbled roads around the Centro Storico, mixing with tourists, embracing, kissing cheeks.

The bars and cafes spill out onto the streets. There’s a hustle, traffic, taxi drivers gesticulating, scooters weaving, priests in Ray Bans strutting the pavements, all against an architectural backdrop that spans the centuries.

Walking around Rome is a must. During the course of our stay, we managed to clock around seven miles a day minimum. From dedicated sightseeing walks to evening strolls, it’s not actually that difficult. 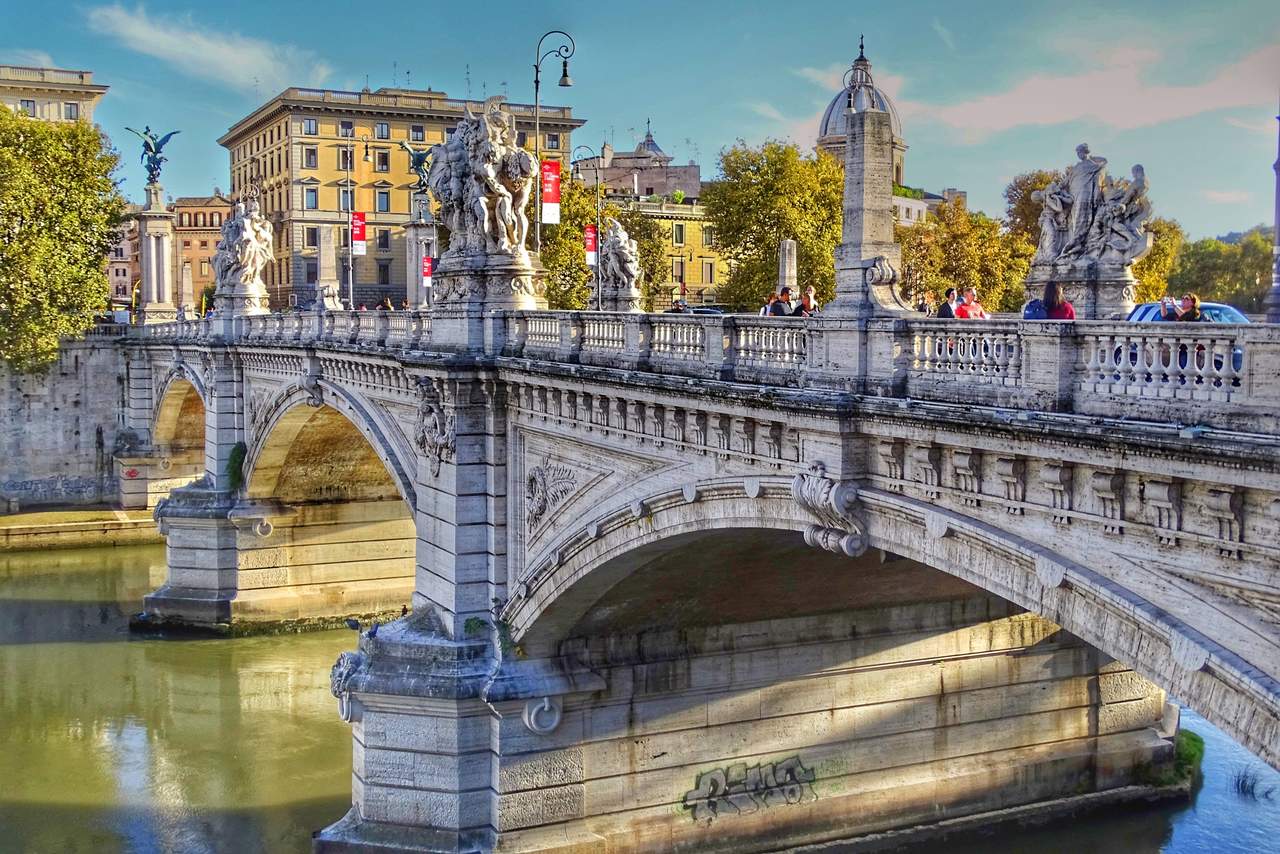 Staying in the centre, it was easy to stroll and take in a variety of sights and scenes. We tended to walk in three directions, towards Borghese via the Spanish Steps, towards Circo Massimo, via the Jewish quarter and Campidoglio and towards the Vatican or Piazza Cavour via the iconic, statue-lined Ponte Sant’Angelo.

Longer walks took us to Piramide di Caio Cestio and back via Giardino degli Aranci with its view over the city. We also walked out to the Catacombs on the southern edge of the city, taking in Quo Vadis chapel and the Appia Antica.

This latter walk also takes you past the Terme di Caracalla complex, which is worth a visit, although unfortunately, like most of the historical sites of interest, dogs are not allowed in.

If the UK leaves the EU, the Pet Passport rules will remain the same but in the case of a no-deal Brexit, the Government has issued the following advice.

“To make sure your pet is able to travel from the UK to the EU after Brexit, you should contact your vet at least 4 months before travelling to get the latest advice.”

When in Rome, don’t forget to visit a local vet to get your dog a worming treatment, at least 24 hours before you travel back to the UK. There is a centrally located vet conveniently called Veterinaria Roma Centro on Piazza Della Pigna, just south of the Pantheon.

Despite our best intentions, we ran out of dog food during our stay. We found Cani E Gatti on Corso Vittorio Emanuele II, which had a good selection of healthy food options.

You can travel with your dog on trains although the rules can vary. We took a day trip to Florence and didn’t actually know there were any rules until our return journey when we were informed we should have paid extra for a dog ticket (but we were let off for being ignorant English people). Before you travel it is worth checking the various train franchises as they do differ : Trenitalia – Travel with your pets and Italo

We didn’t actually use the Metro or bus network as we walked everywhere or used the car for most journeys outside of Rome. The official ATAC website says small dogs are allowed on public transport if leashed and muzzled. This is generally an Italian rule anyway but in practise some common sense is applied.

We took a number of taxi rides with Riley. It was a mixed bag in terms of who would and wouldn’t take you. Most of those that would asked us to carry Riley in our arms, or “portare in braccio.” A small tip of course helps spread the love.

In France, taking Riley into service stations was mixed. Some did allow her in and some didn’t but most of the Aires in France have open spaces for a little walk and toilet stop.

In Switzerland it was a “nein” or “non”!

In Italy we would stop at a number of service stations on the E35 motorway and we did manage to take Riley in. We ordered espresso or cappuccino with soya milk at the counter and stood at one of the tall tables. Riley was always welcome.

5 spectacular luxury destinations around the world