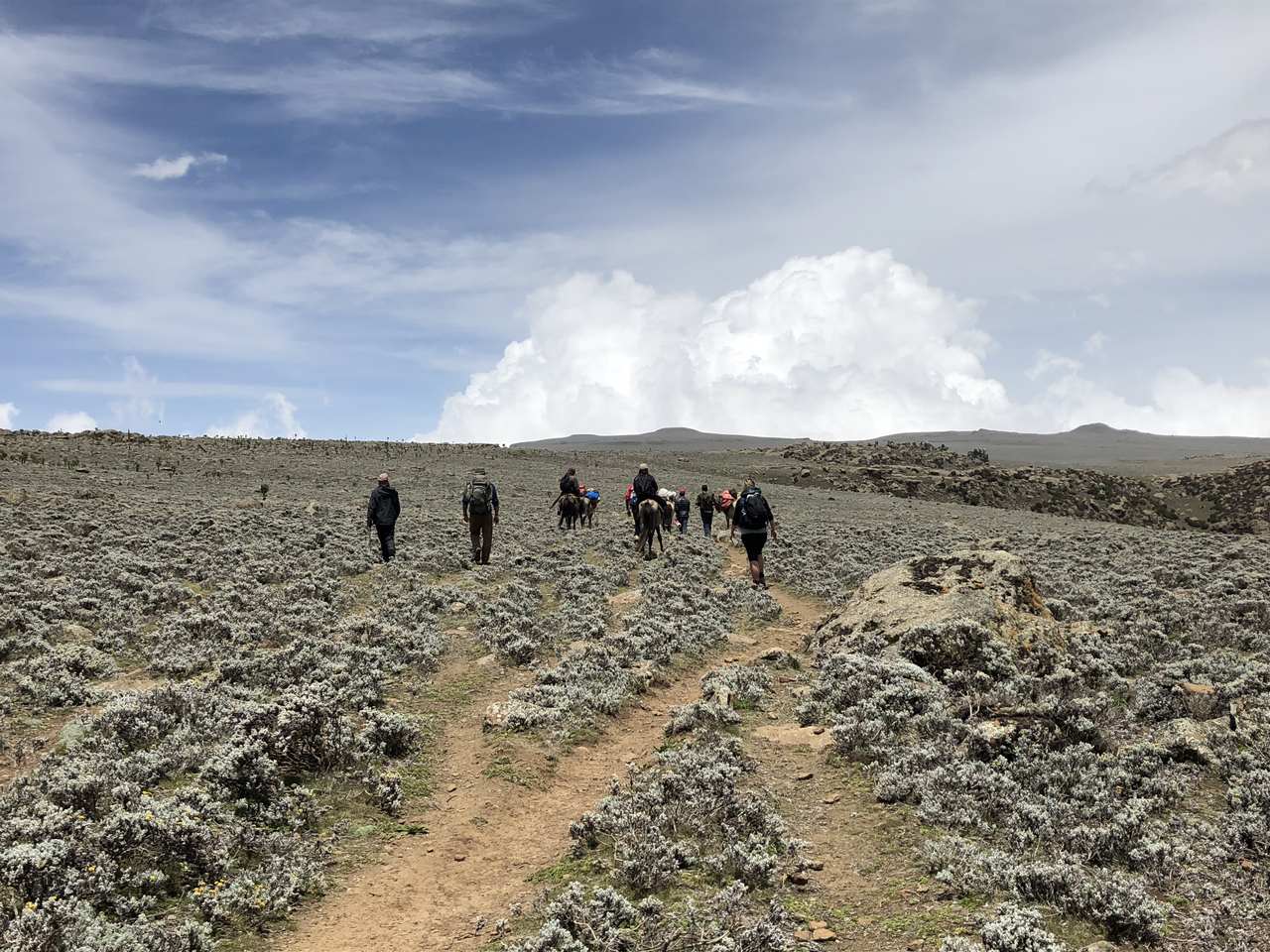 “Those Warthogs” said our guide Ayuba pointing at a pig-like creature grazing nearby, “want to destroy my home”. If I had felt sleepy from our long eight-hour drive from the capital, Addis Ababa, the jolt from this astonishing statement put paid to that.

I was imagining that they could do a lot of damage and fretted about our safety. Ayuba broke into a smile. “It’s ok, they don’t harm humans”.

We were in Dinsho in south-central Ethiopia located in the Oromia Region in the Bale Mountains National Park. Both he and these funny looking creatures with their flat heads, protruding tusks and facial warts call this area home. Remarkably, the region is hardly visited and, as we were about to find out, it has so much to offer, either on foot or horseback.

It was in Dinsho that we had set up camp surrounded by juniper trees and a handful of nonchalant warthogs. They had no interest in us and became jittery at the mere sound of a clicking camera.

My thoughts turned to the four-day trek ahead. I felt unsure. I am relatively fit but not used to trekking, especially not at altitude; I knew we would soon be hiking over the highest plateau in Africa with an average elevation of 4,000 metres (13,123 feet).

“Nothing to worry about” said Sam from YellowWood Adventures who organised the tour.  “Just go at your own pace.”

It was an easy start that late afternoon with a ramble into lush woodlands. The trees reached tall and wide creating a lovely canopy under which we enjoyed the cool of its shade. And so did the Mountain Nyala – a type of grey-brown antelope with a strange line of dots on each side.

They are endemic to these parts and we were treated to herds of them nibbling at the earth, nudging each other or gazing ahead while the horn sporting males stood to attention.

We headed back to camp for rum-fuelled banter around a crackling fire, plenty of food and an early night.

Up early with the frosted morning dew, the sun soon melted the land and we were trekking over sensational landscapes. It was a flattish terrain by the Denka River whose water sparkled in the light.

Farmers were working the land growing barley and occasionally we saw the rare and endangered blue-winged goose while the odd couple of horsemen passed by clad in flowing cloths that covered their heads and faces. 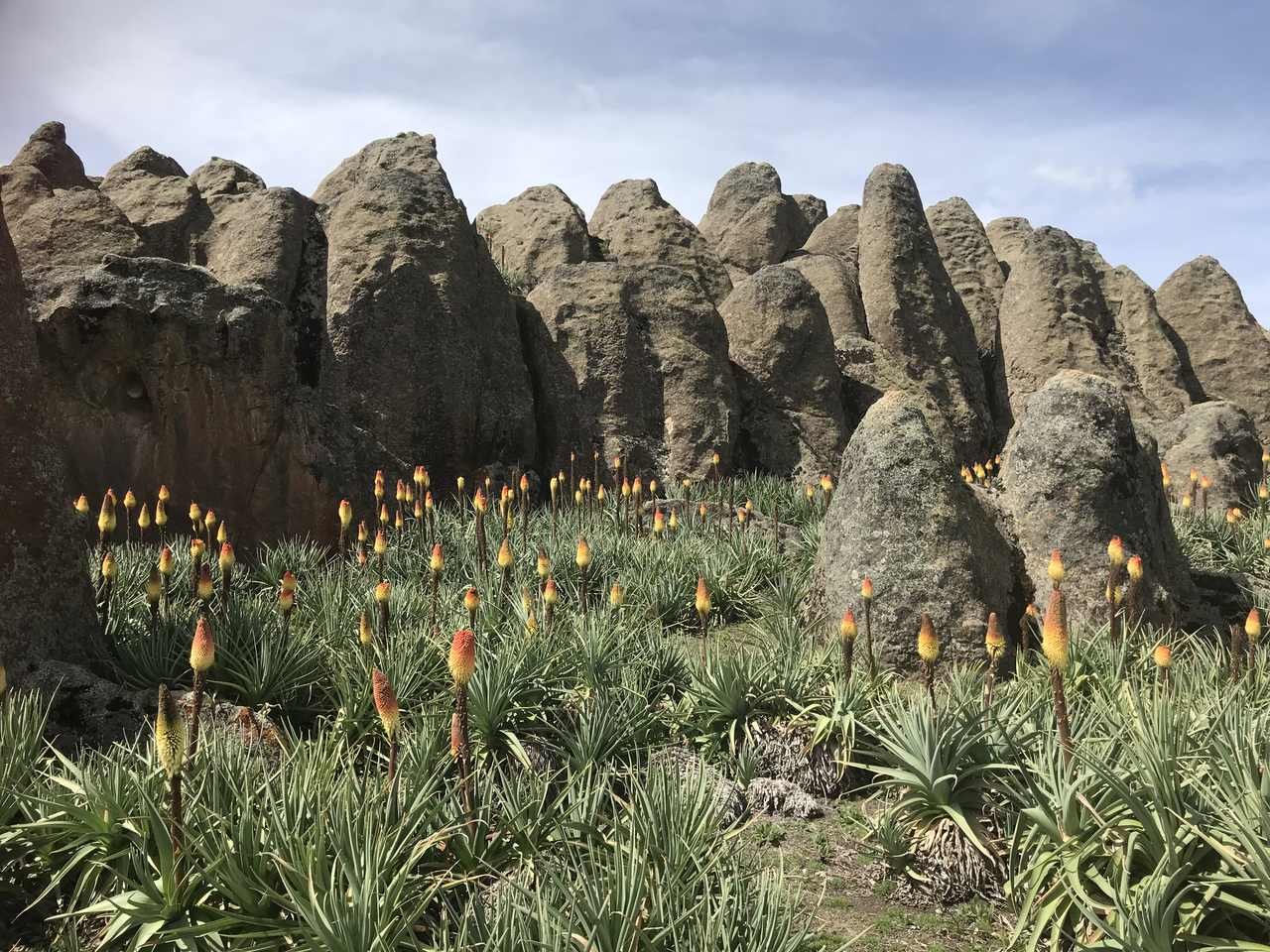 We could hear the chirrup of birds above and Ayuba, who says he can identify 310 species, pointed out a single Lämmergeier – a vulture-like bird with an incredibly long wing span that was headed in the same direction as us; to the Habera waterfall, a gorgeous resting place.

By the time we got to our campsite, it was sheer joy to see everything had been set up. The caravan of horses and horsemen – our support crew – deposited our luggage, put up the tents and had tea and biscuits ready. Dinner was being prepared.

It was food, rum and jokes around the fire until we all flaked out into our tents. Up early for a breakfast of scrambled eggs, coffee and tea ahead of our trek to Sodato.

We were traversing a landscape fashioned by 300 million years of volcanic rock, bits of which I could see strewn around the place. The snows had come and the sheer load coaxed the land into a valley and left it with a river flowing, allowing the vegetation to grow.

This was the Sanetti Plateau, a treeless wilderness dubbed the Rooftop of Africa. We had reached just over 3,500 metres (11,500 feet); high enough for giant lobelia, a palm like plant, to grow. 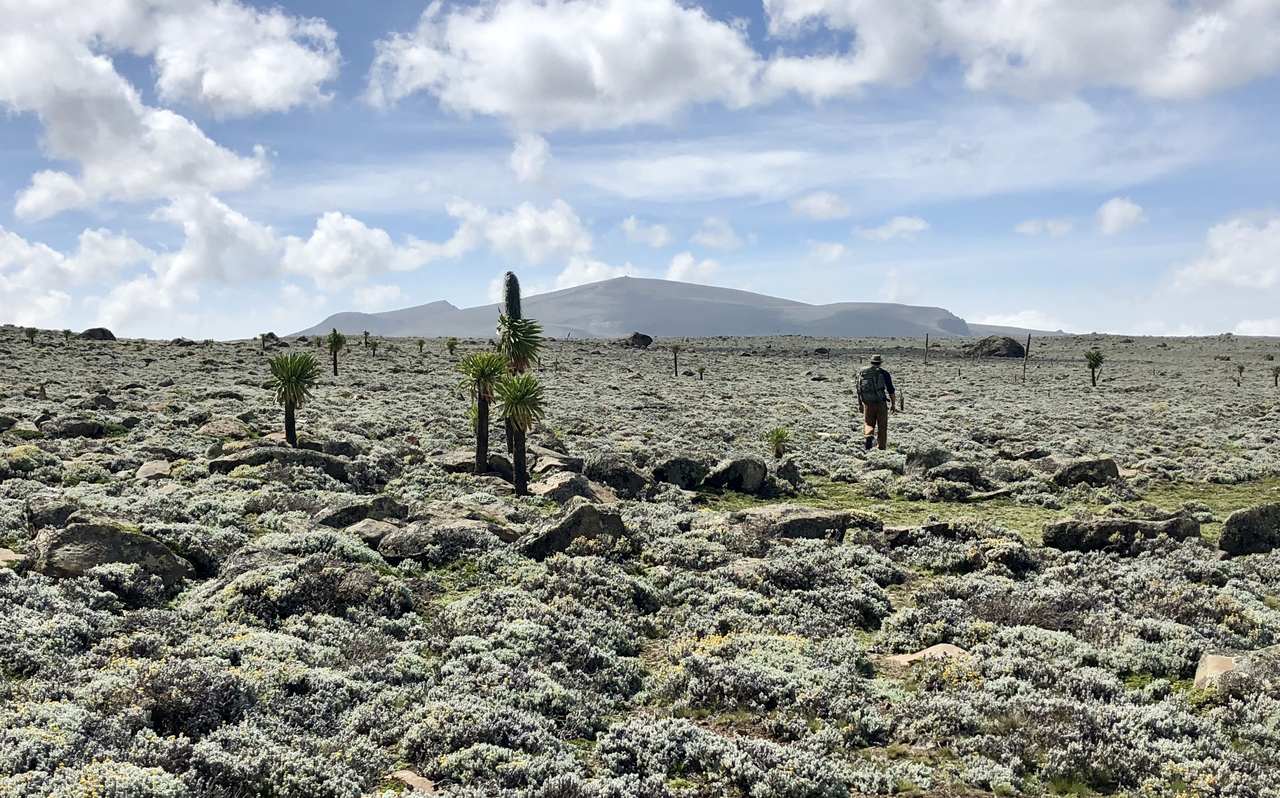 It blossoms only once in its lifetime producing a sturdy flower that can reach an incredible five metres. The plant dies soon after the flower, no doubt from the sheer exertion – a word I had empathy with.

It was at this point I began to flail. My lungs simply couldn’t gather enough air at this altitude  and I struggled to keep up. “Slow down, but keep moving – get into a rhythmic plod” advised Sam. He was quite the coach.

The sun, now at its peak, was spreading a lionesque lick of orange sorbet over the land lighting up everything in its wake.

Sure it was beautiful but climbing rocks and hills in the heat of the day took its toll. Scrambling pathetically, I was passed by three slim women from the Oromia tribe in flowing garments of purple and orange carrying babies on their backs. Their tribe live in the mountains moving to various parts of the plateau with their herds in sync with the land, as their ancestors have always done.

These women were cool, unfazed and stopped to supportively wave me on with kind smiles and words I didn’t understand. Ayuba came to find me. They shouted at him. I asked “What happened?” he answered “they told me off saying that I am trying to kill you”.

Finally, we arrived at the flat plains of the Ethiopian wolf. I thought I could make out a smudge of orange in the longish grass. The binoculars said otherwise; it was just the burnt ground. But then I could see the bobbing movement of a wolf running after a mole rat. Joy! 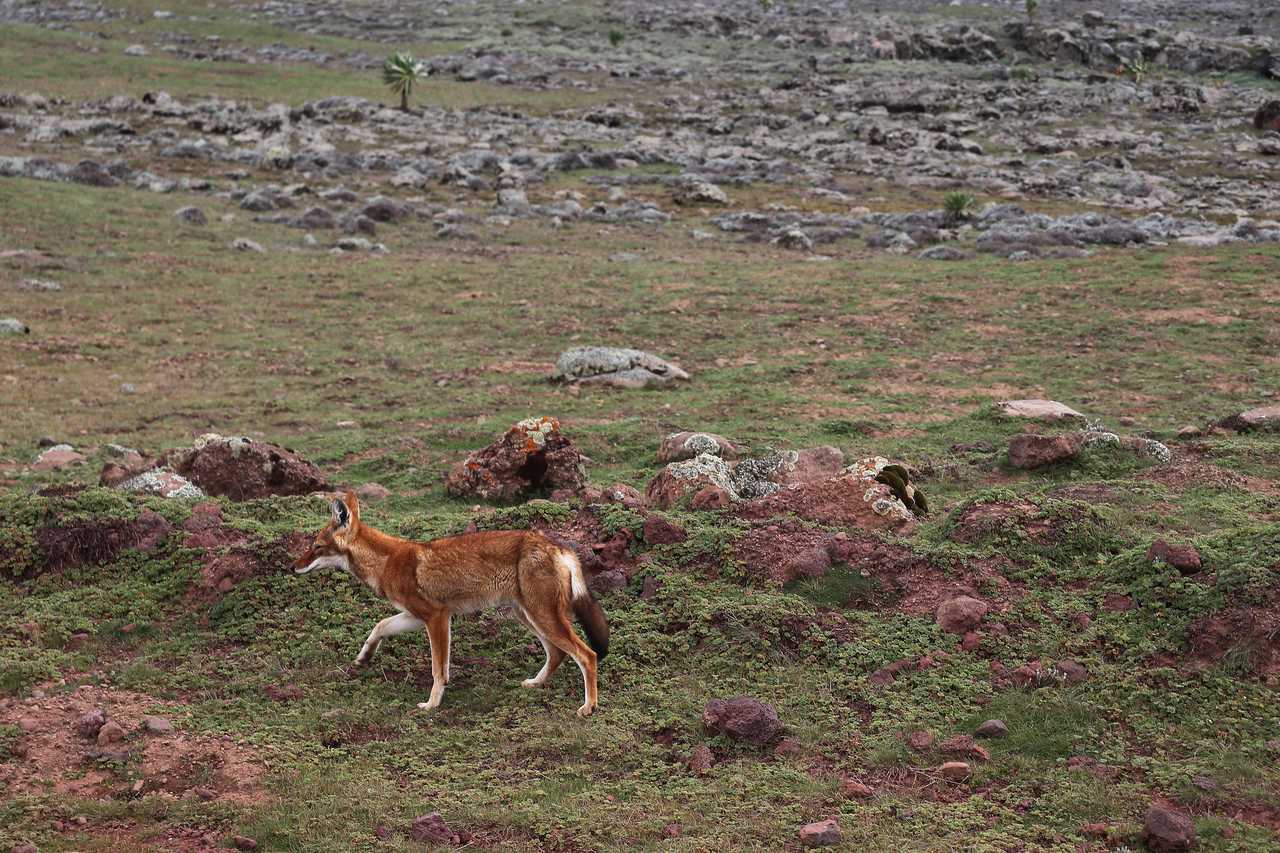 These fox-like creatures are the rarest canine species in the world. There is simply no other way to spot one: there are only 450 of them in the world and half of them are right here in the Bale Mountains. Incredibly, we saw six in one afternoon.

The land flattened after this. There was a carpet of silver(ish) Everlasting flowers, a weatherproof plant that grows all year round at altitudes of between 2,500 metres (8,202 feet) and 3,900 metres (12,795 feet)). Locals make perfume out of them.

I made it to Wasswma camp breathless and couldn’t stay awake for the nightly fireside banter. I drank plenty of water and slept.

The next day I was already dressed before the sun had time to brighten the sky and mountains and clouds mingled beneath a drab sky. I felt tired. 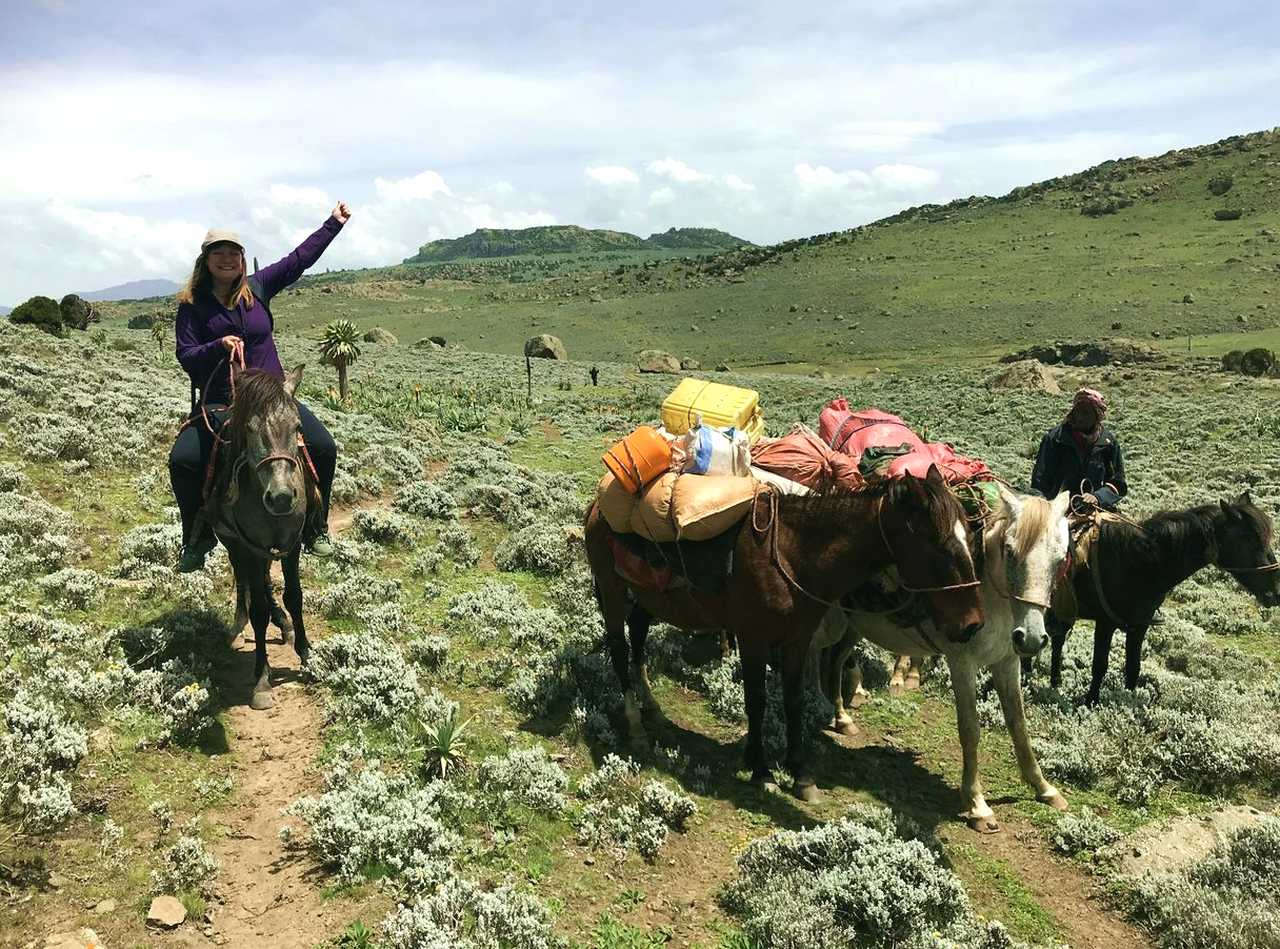 Then Sam said something that changed everything: “I’m going to plonk you on a horse”. It was an order not a suggestion. Looking at my face he realised I had never been on a horse before. “Just think sack of potatoes and you will be fine”.

Atop my gentle horse, Dama (which means “brown”), I was able to appreciate the view of Mount Tuludimtu (Red Mountain) the second highest mountain in Ethiopia at 4,377 metres (14,360 feet) high, looming up in the distance.

Beyond were stretches of wilderness and brooding rock formations. Herds of sheep, goats or cows seemed to magically appear with perhaps a shepherd resting on a rock, looking on.

Soon we reached Rafu and camped beneath the rock forest to the backdrop of the most magnificent rock formations. Ayuba had spotted hyenas prowling. He worried for the horses and for us too. Throughout the night he and his team lit fires to ward them off. We remained safe.

By late afternoon of the next and our last day, we approached the Sanetti Road, the highest road in Africa. Our driver was waiting to take us to Goba. Amazingly we saw wolves looking at us by the roadside.

Once we passed the gorge, trees began to make an appearance from lush land while tuk tuks, men on motorbikes and horse and carts began to form a kind of traffic. Within eight kilometres, the land had dropped from 4,000 metres to just 2,000 metres.

We stopped at the Harenna forest, one of the last natural forests in the country and one that has its own stash of wonderment – colobus monkeys, hogs, and an hypnotising waterfall.

We spent that night in a hotel in Goba before making our way back to Addis Ababa. The long drive left time for contemplation about the Bale Mountains and the Sanetti plateau, still a mystery, unique and raw, offering itself up to exploration, warthogs and all.

This tour is organised by YellowWood Adventures. You spend your first night in Addis Ababa with a city tour. Tour price starts at £1,599. Ethiopian Airlines offers direct flights to Addis Ababa. You can arrange your visa at the airport. It costs $50.