Have you ever wondered how this day is celebrated around the world? 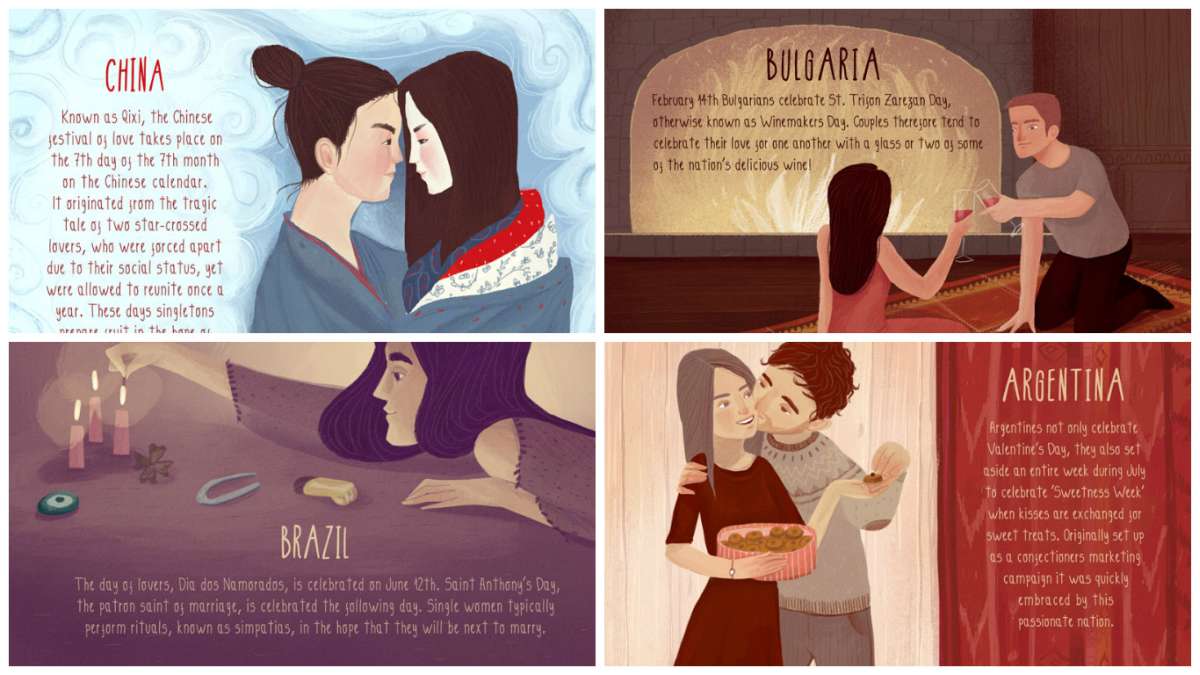 With Valentine’s day on the way and a little bit of romance is just so uplifting. Have you ever wondered how this day is celebrated around the world? 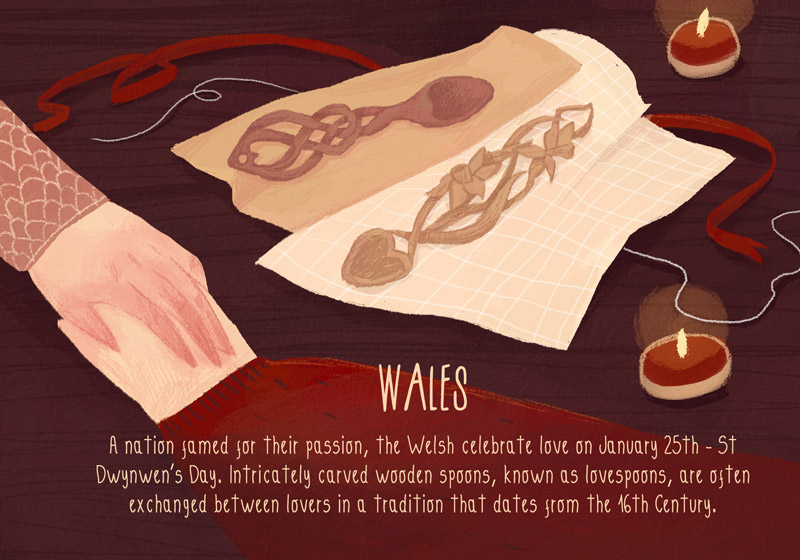 A nation famed for its passion, the Welsh celebrate love on January 25th – St Dwynwen’s Day. Intricately carved wooden spoons, known as lovespoons, are often exchanged between lovers in a tradition that dates from the 16th century. 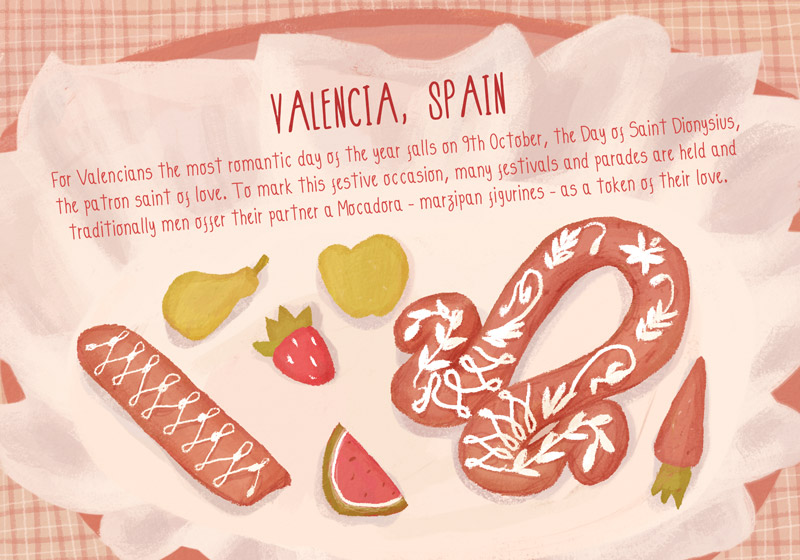 For Valencians the most romantic day of the year falls on 9th October, the Day of Saint Dionysius, the patron saint of love. To mark this festive occasion, many festivals and parades are held and traditionally men offer their partner a Mocadora – marzipan figurines – as a token of their love. 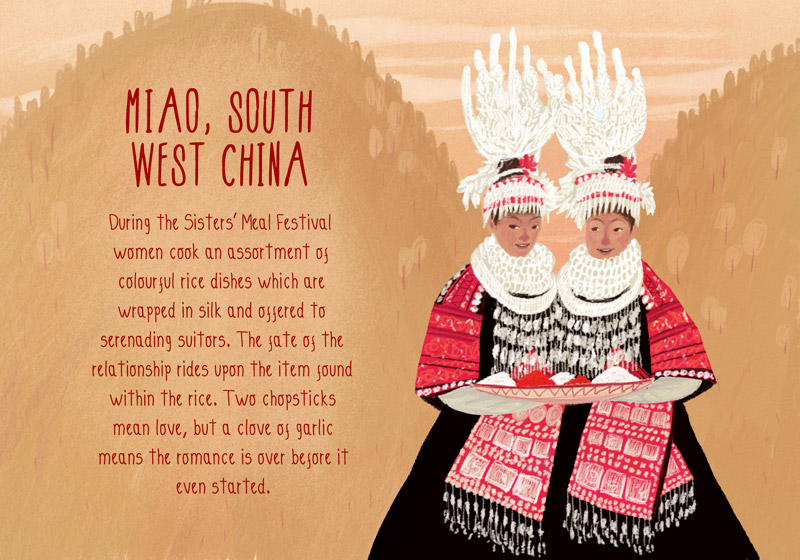 During the Sister’s Meal Festival women cook an assortment of colourful rice dishes which are wrapped in silk and offered to serenading suitors. The fate of the relationship rides upon the item found within the rice. Two chopsticks mean love, but a clove of garlic means the romance is over before it even started. 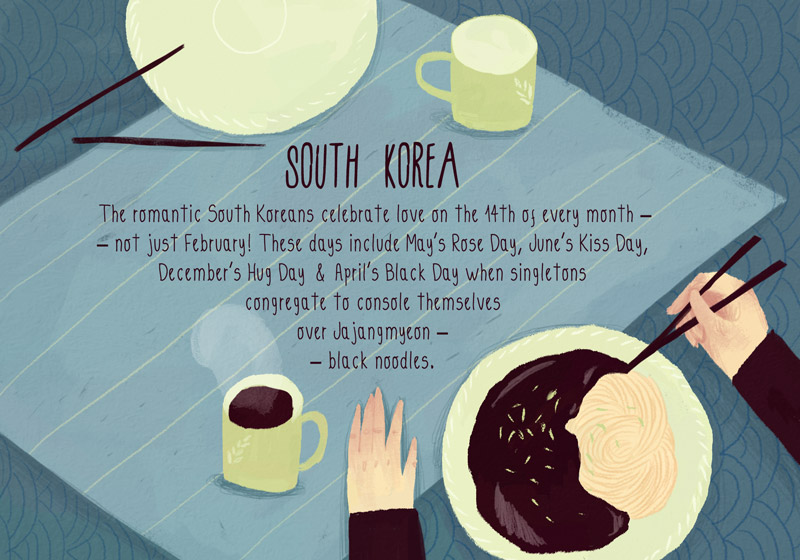 The romantic South Koreans celebrate love on the 14th of every month – not just February! These days include May’s Rose Day, June’s Kiss Day, December’s Hug Day and April’s Black Day when singletons congregate to console themselves over Jajangmyeon – black noodles. 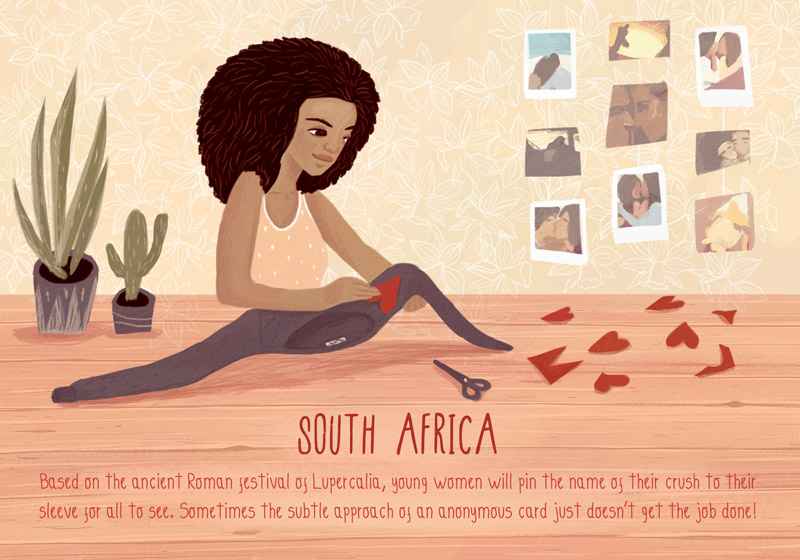 Based on the ancient Roman festival of Lupercalia, young women will pin the name of their crush to their sleeve for all to see. Sometimes the subtle approach of an anonymous card just doesn’t get the job done! 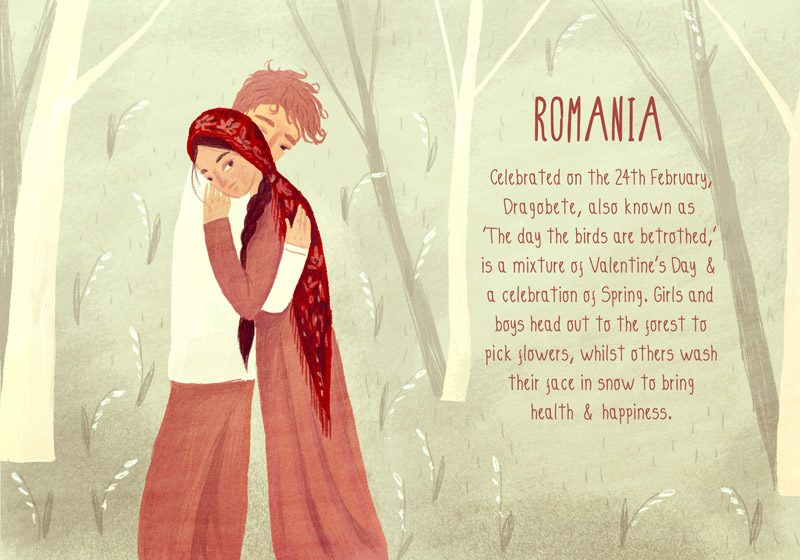 Celebrated on the 24th of February, Dragobete, also known as ‘The day the birds are betrothed,’ is a mixture of Valentine’s Day & a celebration of Spring. Girls and boys head out to the forest to pick flowers, whilst others wash their face in snow to bring health & happiness. 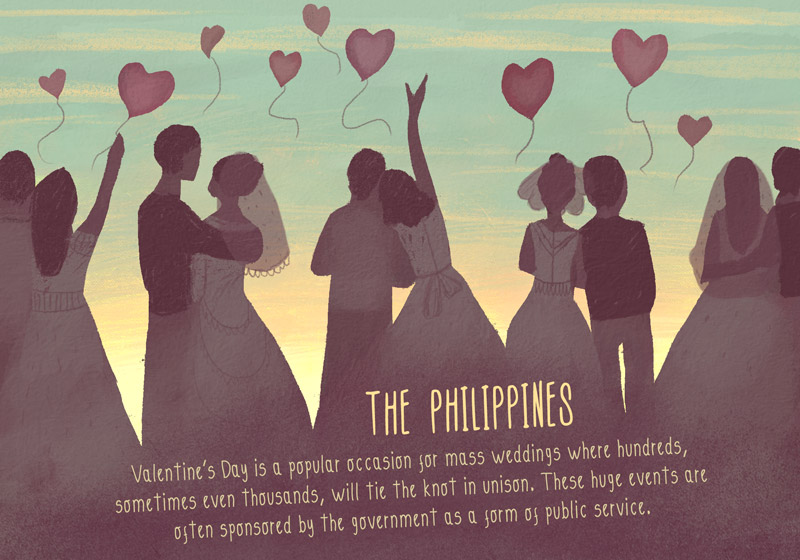 Valentine’s Day is a popular occasion for mass weddings where hundreds, sometimes even thousands, will tie the knot in unison. These huge events are often sponsored by the government as a form of public service. 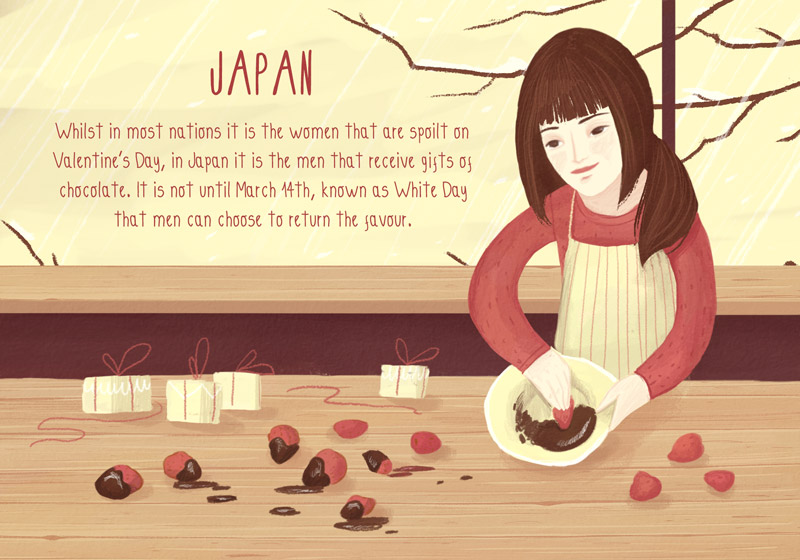 Whilst in most nations it is the women that are spoilt on Valentine’s Day, in Japan it is the men that receive gifts of chocolate. It is not until March 14th, known as White Day that men can choose to return the favour. 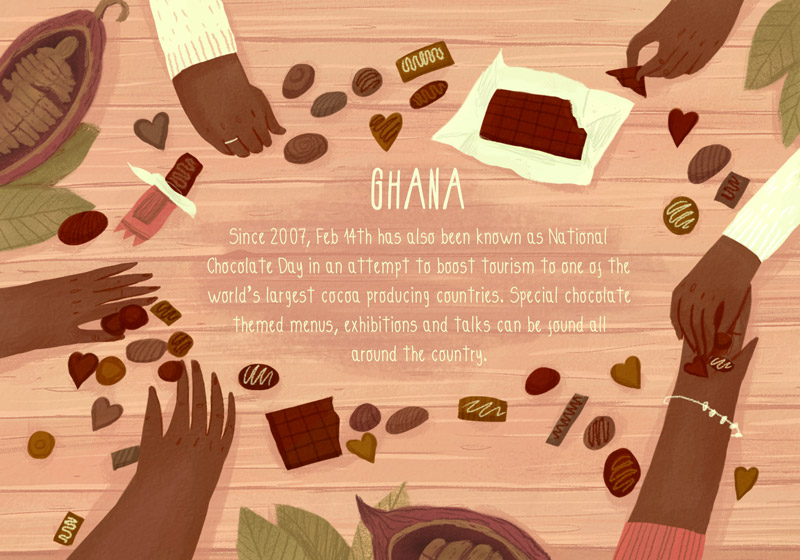 Since 2007, Feb 14th has also been known as National Chocolate Day in an attempt to boost tourism to one of the world’s largest cocoa producing countries. Special chocolate themed menus, exhibitions and talks can be found all around the country. 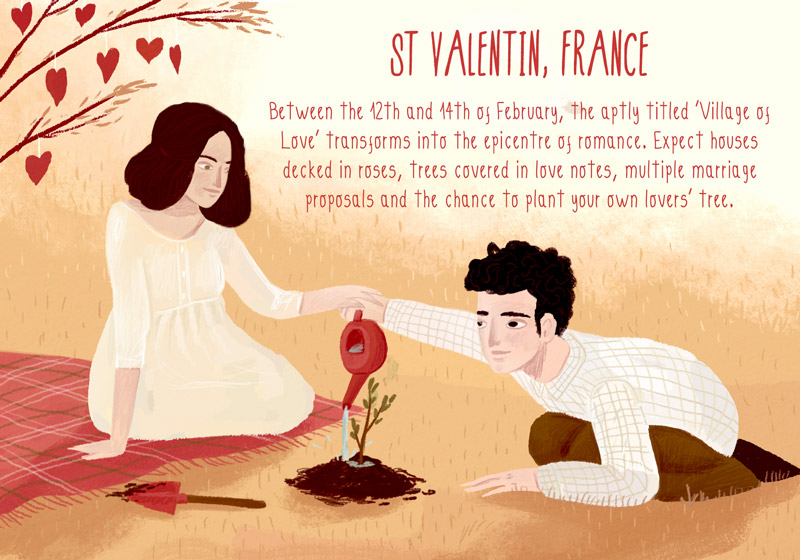 Between the 12th and 14th of February, the aptly titled ‘Village of Love’ [click for map] transforms into the epicentre of romance. Expect houses decked in roses, trees covered in love notes, multiple marriage proposals and the chance to plant your own lovers’ tree. 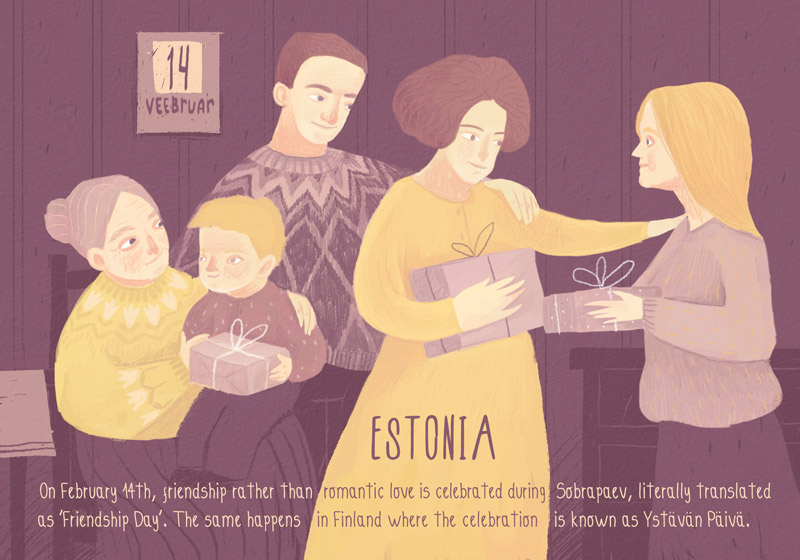 On February 14th, friendship rather than romantic love is celebrated during Sobrapaev, literally translated as ‘Friendship Day’. The same happens in Finland where the celebration is knowns as Ystävän Päivä. 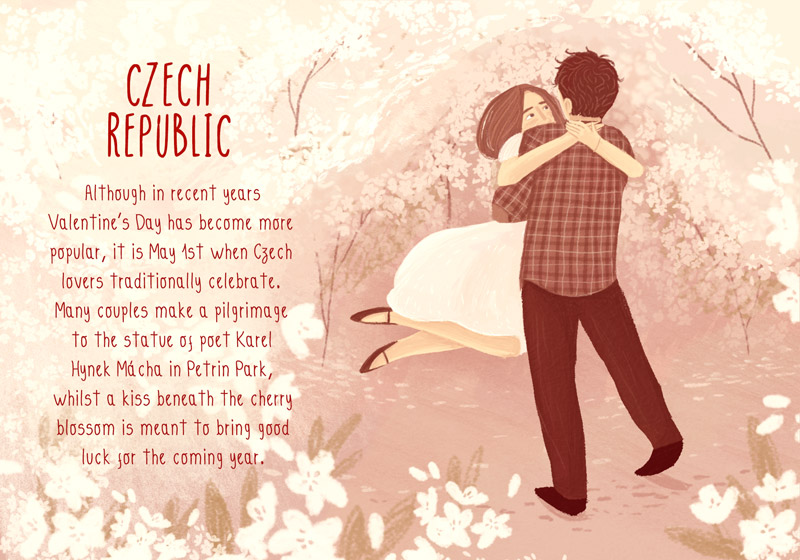 Although in recent years Valentine’s Day has become more popular, it is May 1st when Czech lovers traditionally celebrate. Many couples make a pilgrimage to the statue of poet Karel Hynek Mácha in Petrin Park, whilst a kiss beneath the cherry blossom is meant to bring good luck for the coming year. 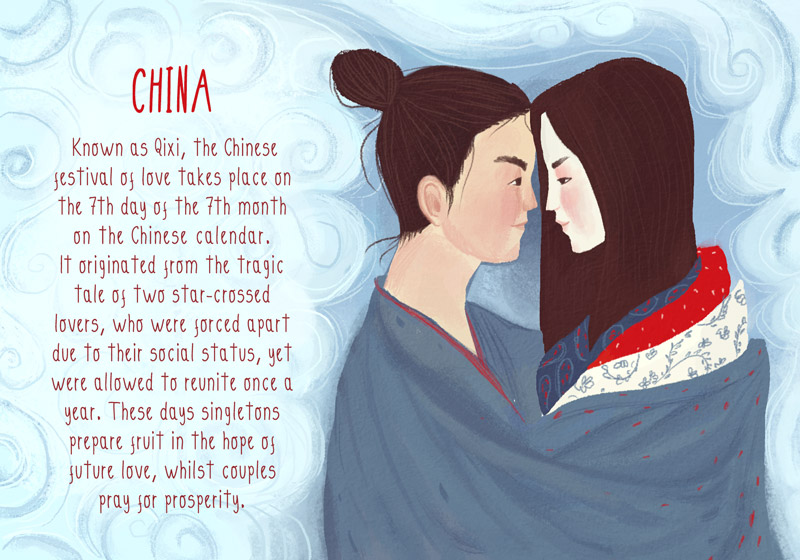 Known as Qixi, the Chinese festival of love takes place on the 7th day of the 7th month on the Chinese calendar. It originated from the tragic tale of two star-crossed lovers, who were forced apart due to their social status, yet were allowed to reunite once a year. These days singletons prepare fruit in the hope of future love, whilst couples pray for prosperity. 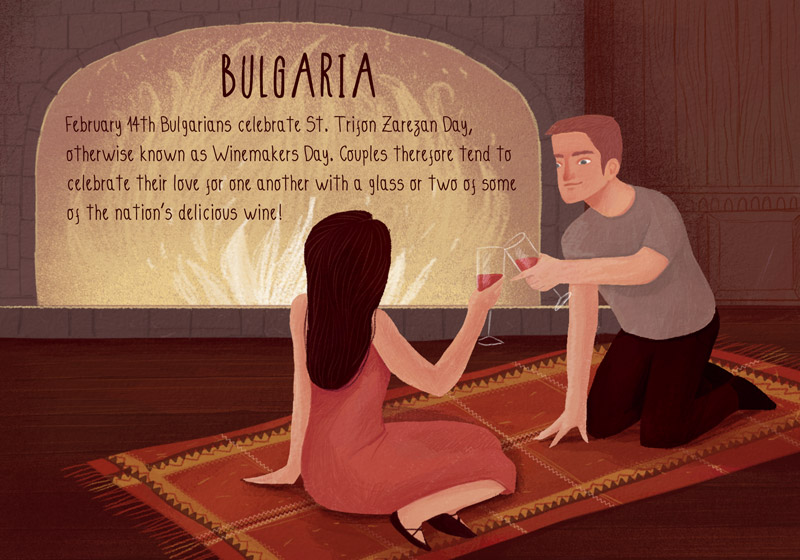 February 14th Bulgarians celebrate St. Trifon Zarezan Day, otherwise known as Winemakers Day. Couples, therefore, tend to celebrate their love for one another with a glass or two of some of the nation’s delicious wine! 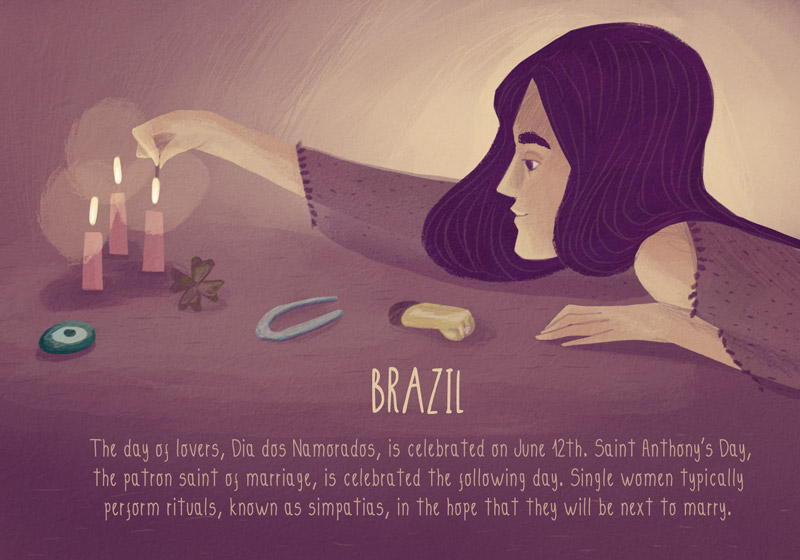 The day of lovers, Dia dos Namorados, is celebrated on June 12th. Saint Anthony’s Day, the patron saint of marriage, is celebrated the following day. Single women typically perform rituals, known as simpatias, in the hope that they will be next to marry. 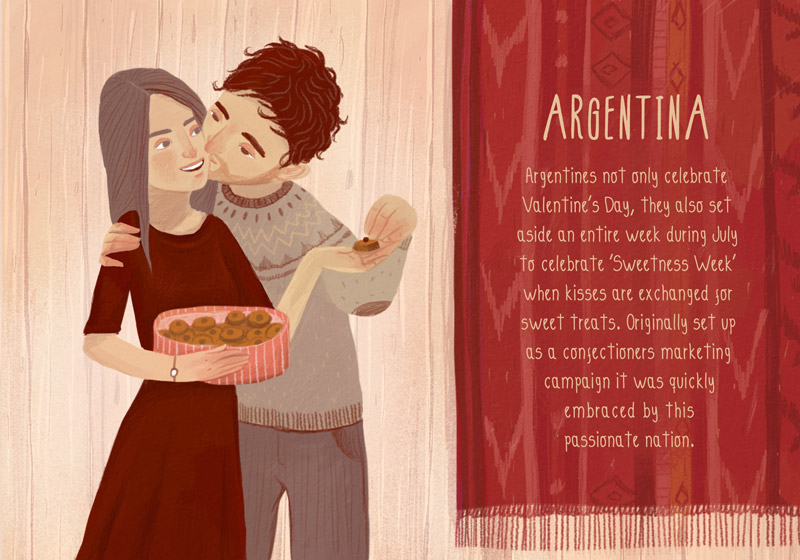 Argentines not only celebrate Valentine’s Day, they also set aside an entire week during July to celebrate ‘Sweetness Week’ when kisses are exchanged for sweet treats. Originally set up as a confectioners marketing campaign it was quickly embraced by this passionate nation.