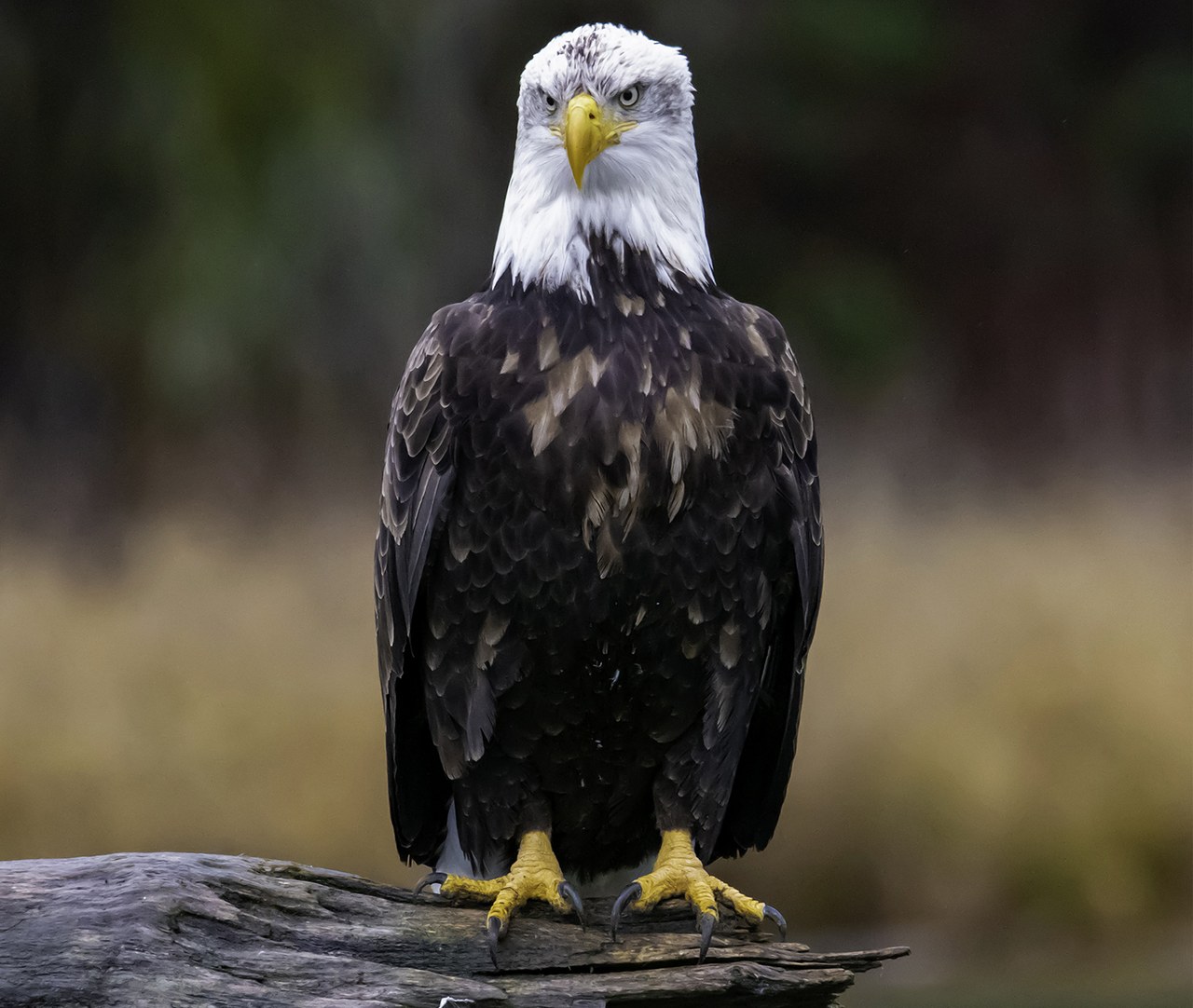 The white head is easy to spot in the moss-covered and leafless tree branches. Huge wings are silhouetted against the cloudy sky. Each bend of the river displays another tree dotted with these large raptors. Hundreds of bald eagles migrate south in the winter from Canada and Alaska in search of food to the cold glacier fed waters of the Skagit and Nooksack rivers of Washington State.

They feed on the winter run of chum salmon that arrives from November through January each year. The deep snows and cold temperatures farther north drive the birds to seek the milder climate of the northern reaches of the Pacific Northwest. I experience this natural wonder while running the Skagit river in a jet boat and the Nooksack river on a pontoon boat to see the most famous of birds.

Pushing the boat out to take a picture 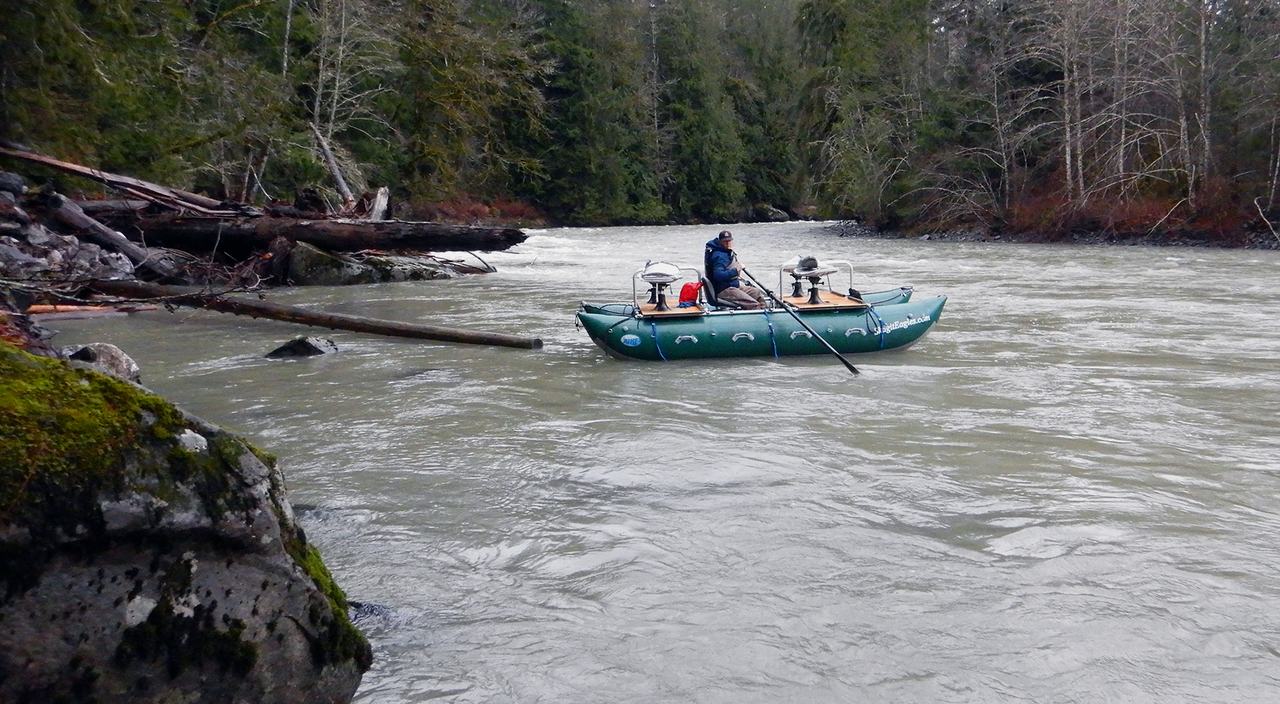 Floating in a pontoon on Nooksack river

The afternoon in Mid-December is cloudy, cool, and threatens rain. The forecast is for a three-hour window of dry conditions as I board the jet boat anchored to the muddy shore of Howard Miller Steelhead Park in Rockport. Wayne of Skagit River Guide Service helps the half a dozen photographers with their long lenses to board and pushed the boat off into the strong current.

The water is clear as we roar  up the cold snow-fed river towards Marblemount in the North Cascades National Park. Eagles can be seen in the bare tree branches along the shore. There is an odour of rotting salmon as we slow  to view these raptors feeding along the shoreline. After a run of only a couple of miles the large motor shuts down and a small quieter trolling engine is engaged. We float back downstream with the small engine helping to keep us in the current and away from the many snags, root balls and rocks.

Wayne knows this river well and gently puts the boat onto a gravel bar near a common feeding spot. The river deposits the dying salmon and their bodies onto the many gravel bars and the eagles feast on the flesh. Everyone is quiet as we watch a great blue heron wade toward an eagle feasting on a salmon. 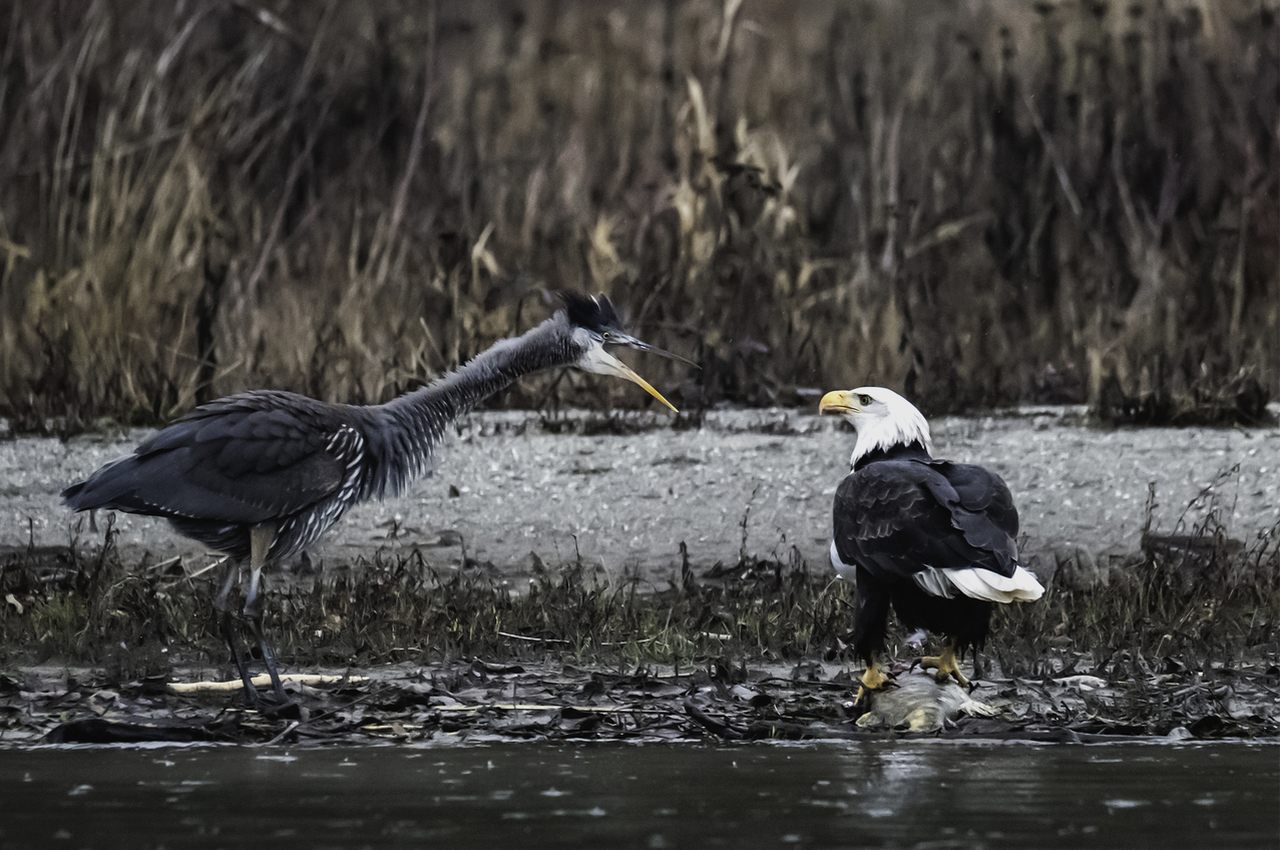 Confrontation between a heron and an eagle over lunch

The long-legged bird and his white-headed adversary fight over the delectable tiger striped fish. The heron first walks slowly by and when the eagle fails to leave, he turns and extends his long neck and beak screams at the raptor. The eagle with its talons firmly in the flesh of the fish seems unfazed and just stares at his challenger. The heron remains and  pecks a morsel or two when the eagle looked away.

We work our way back and forth up river and down to watch the birds in their daily routine. Young eagles are common with their brown feathers just tinged with white. A golden eagle had been seen in the same area just the day before. The cloudy weather keeps the birds near the river. If the sun shines the raptors fly skyward to float on the thermals. I’m lucky, the rain held off till the end of my tour and the birds kept to their roosts till they spotted their next meal. I watch as they launch themselves into the air and extend their huge brown wings. 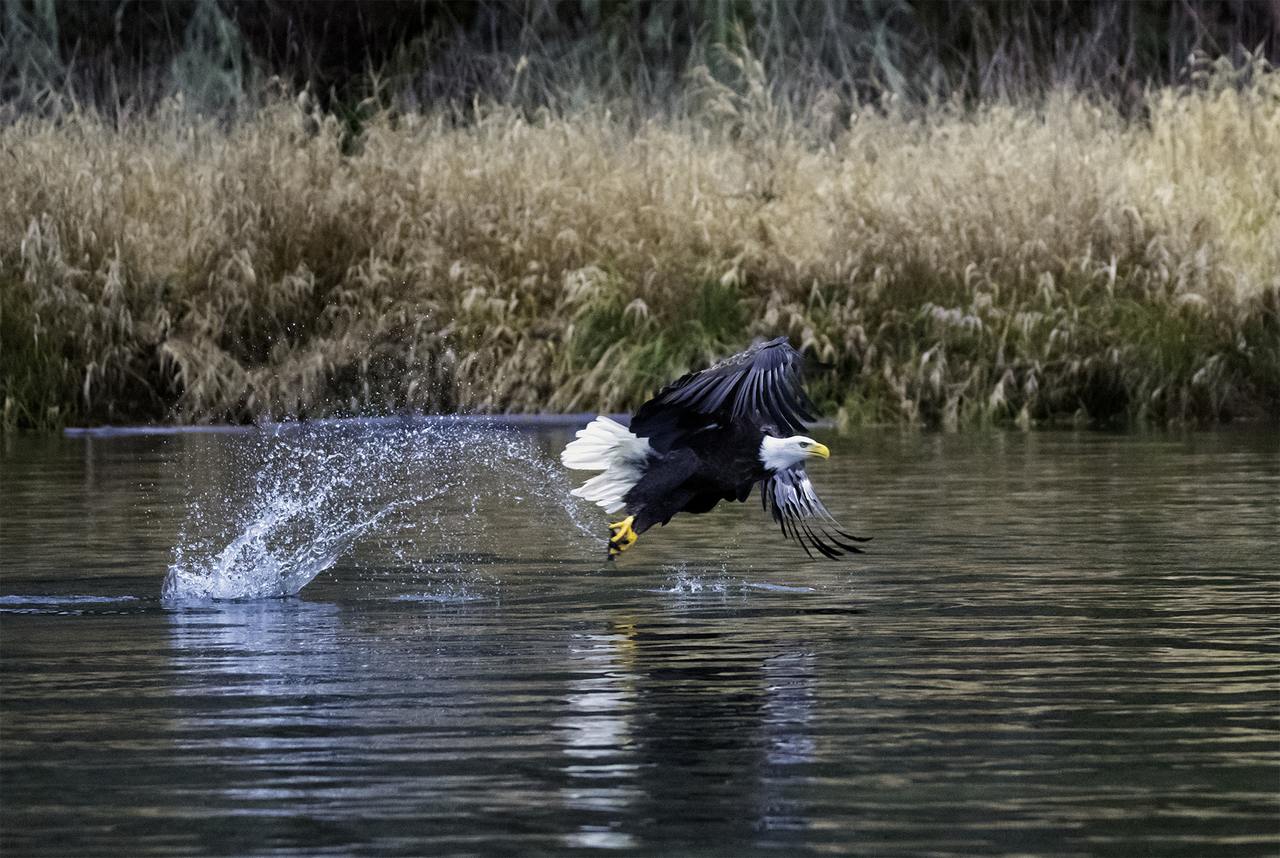 The adult eagles with their distinctive white heads and tails drop from their perches high in the branches of the nearby trees to swoop down and snag a smaller fish right from the river. The eagle uses his wings to break his descent as he nears the water. He extends his yellow talons and strikes the fish just below the surface. The bird quickly flaps back into the air and flies away to eat his meal on a nearby snag.

We float by a large root ball of a downed tree with a mature eagle trying to lift a large chum salmon from the water onto the roots. The eight-mile section of the Skagit river between Rockport and Marblemount can be the feeding ground for dozens to hundreds of eagles depending on the strength of the salmon run and the frequency of flooding. I saw at least 50 different birds in the section of the river.  I looked forward to the next day when I would float the Nooksack River further North where hundreds of bald eagles were waiting for me.

The Nooksack River is a favourite of migrating bald eagles. The spectacular North Fork is the northernmost river in Washington, running milky with snowmelt from the glaciers on Mount Baker and Mount Shuksan in North Cascades National Park. The North fork is joined by the Middle and South forks as it winds through forests and farmlands on its way to Puget Sound, near Bellingham.

The water level of this river changes constantly in the winter and new obstacles, gravel bars, snags, and downed trees are everywhere. There are very few access points for boats and only very shallow draft pontoon boats can float the several miles of scenic river between Maple Falls and the Mosquito Lake Road Bridge.

Alone with the eagles

I watch as our guide lowers our five-person pontoon boat down the steep bank to the fast-flowing emerald waters. The descent down to the river leads over roots and boulders to a small flat spot where our guide loads us one by one into the four elevated seats of our craft.

Within a few minutes we spot our first raptor flying on broad wings above the trees. More are roosting in trees along the shore as the river became wider. The water flows in serpentine bends that seem endless. Uprooted trees from a recent flood were lodged on nearby gravel bars. I see no other boats on the river. We were alone with the eagles.

The eagles increased dramatically after we passed by the Nooksack Salmon Hatchery. The fish returning to spawn stay downstream of the hatchery so that is where the birds congregate. We leave the boat at a shallow ford and walk along the wide gravel banks to get a closer view of an eagle nest high in the trees along the shore. It seemed to be guarded by a pair of birds perched nearby. Our guide drifts our rubber hulled craft downstream to another wide gravel bar.

We step off and slowly creep across the rocks to the other channel in the hopes of seeing eagle feeding along the shore. I hear the distinctive call of other eagles from a tree downstream. Several white-headed lookouts look on perhaps warning the other birds as they fly into the gray sky before we get close. The eagles seem more skittish on the Nooksack then the ones on the Skagit.

The last few miles before our pullout increases the count of eagles to nearly 200 by the time the Mosquito Lake Road Bridge comes into view. Every other tree seemed to have two or three birds sitting in them.

The Nooksack is a very different river experience than the Skagit. It is a wild and scenic adventure that allows you to experience nature and see the cycle of life played out on its shores. The Skagit and the Nooksack provide one of the great winter wildlife experiences you can have. Don’t miss it.

Guide: To see the most birds and especially if you are going to try and photograph them you can arrange this with Skagit River Guide Service, at Skagit River Fishing Guide.

Drive: drive along the Skagit River from Rockport to Marblemount to see the eagles from the various pullouts and viewing sports as the road follows the river.

Best time to go: Each year there is an Eagle Fest in Rockport in January. Eagle numbers  peak in Mid-December and slowly decline into January. Weather is usually milder in December too. They are numerous hotels and restaurants within a 30 minute drive of Rockport.