Home WorldEast-Southeast AsiaJapan What to see in Hiroshima and the Setouchi Region, Japan
JapanTravel Articles 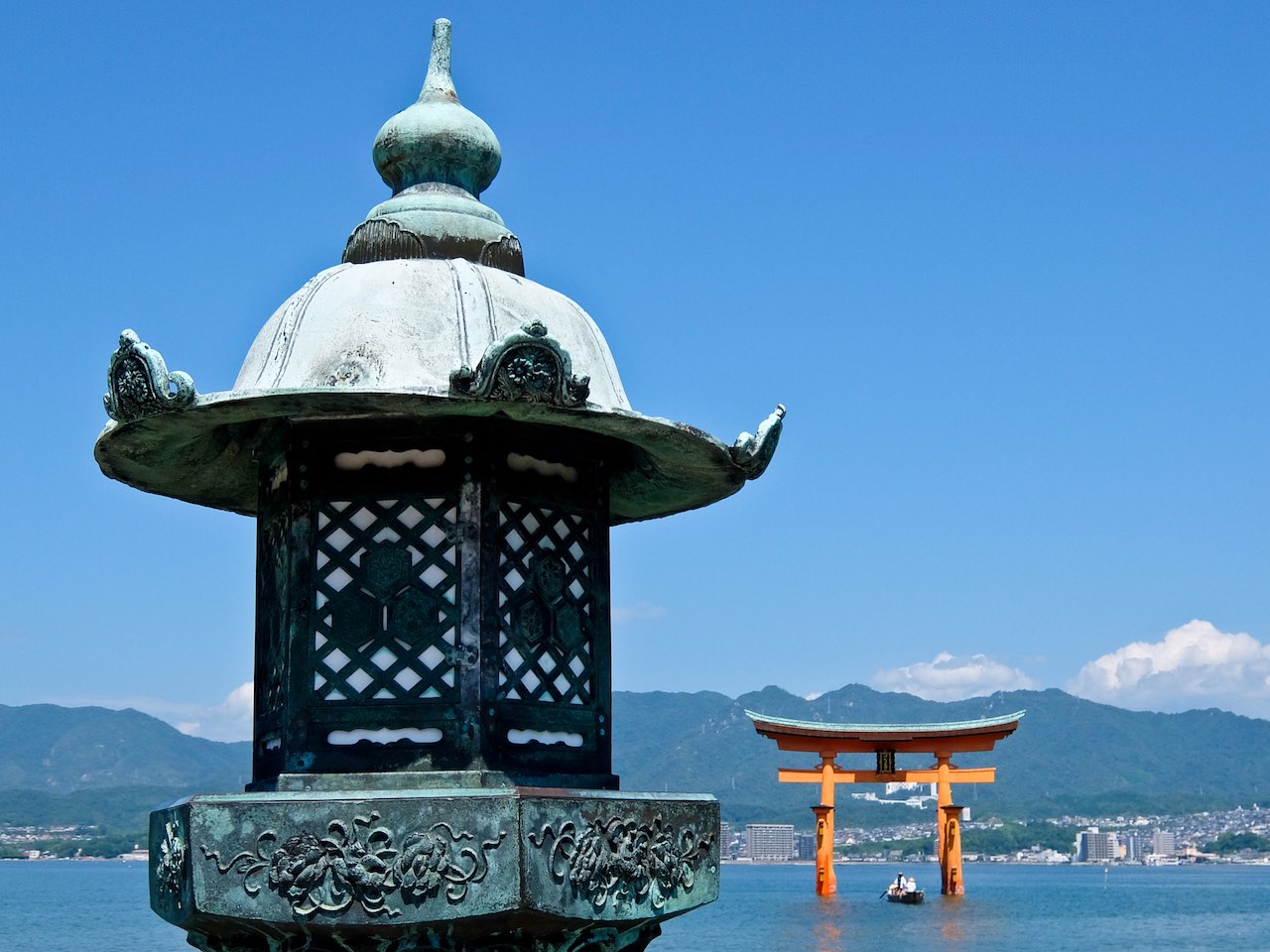 The only place in Japan’s Setouchi region that will be familiar to most is Hiroshima, the city destroyed by the first atomic bomb in WW2. It’s a destination in its own right but makes a great base for exploring the Seto Inland Sea, containing more than 350 islands. You’ll find Shinto shrines, archetypal Japanese landscapes and delicious food and drink including the deadly Fugo fish.

READ ALSO: Where to take the best photos in Setouchi Region, Japan

Hiroshima is a five hour bullet train ride west of Tokyo and of course where the first atom bomb was dropped on 6th August 1945. It was almost completely flattened but since then it’s been entirely rebuilt. It’s an attractive vibrant city, but of course it’s hard to ignore its terrible history.

It’s dusk as I make my way down to the Motoyasu River to see the iconic Genbaku Dome, the shell of the Industrial Promotion Hall, preserved exactly as it was left after the blast. This area was the commercial and political heart of the city, so it was an obvious target for the American bombers. The Dome was declared a UNESCO World Heritage Site in 1996 and it’s hard not to feel moved by the tragedy. 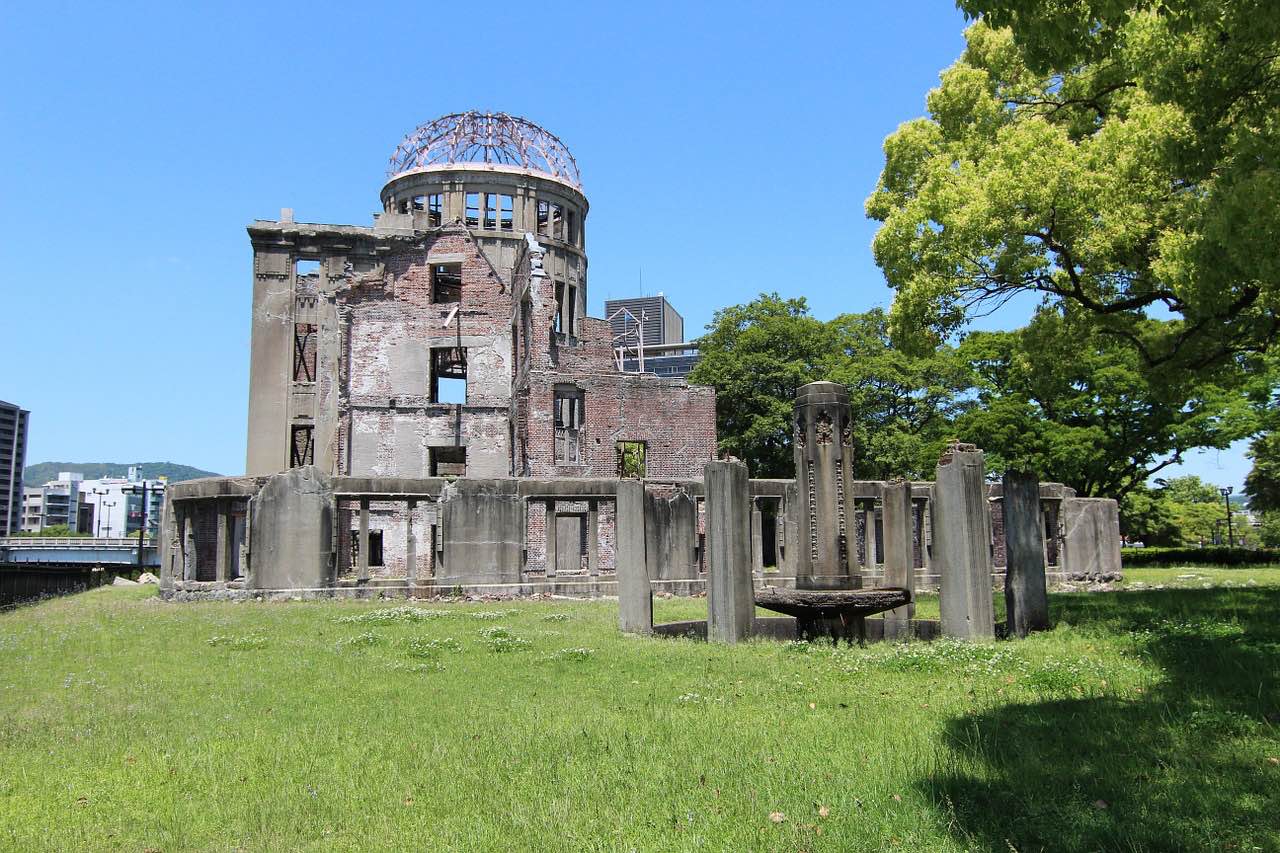 I walk over to the opposite bank which has been dedicated as Peace Memorial Park. The msuem details the history of Hiroshima, particularly the dropping of the bomb and its aftermath. The main building deals with the events of August 6, through scientific explanation and there are rather grisly exhibits of items belonging to the victims. The east building tells the story of Hiroshima before and after the bombing and describes the city’s nuclear disarmament efforts. 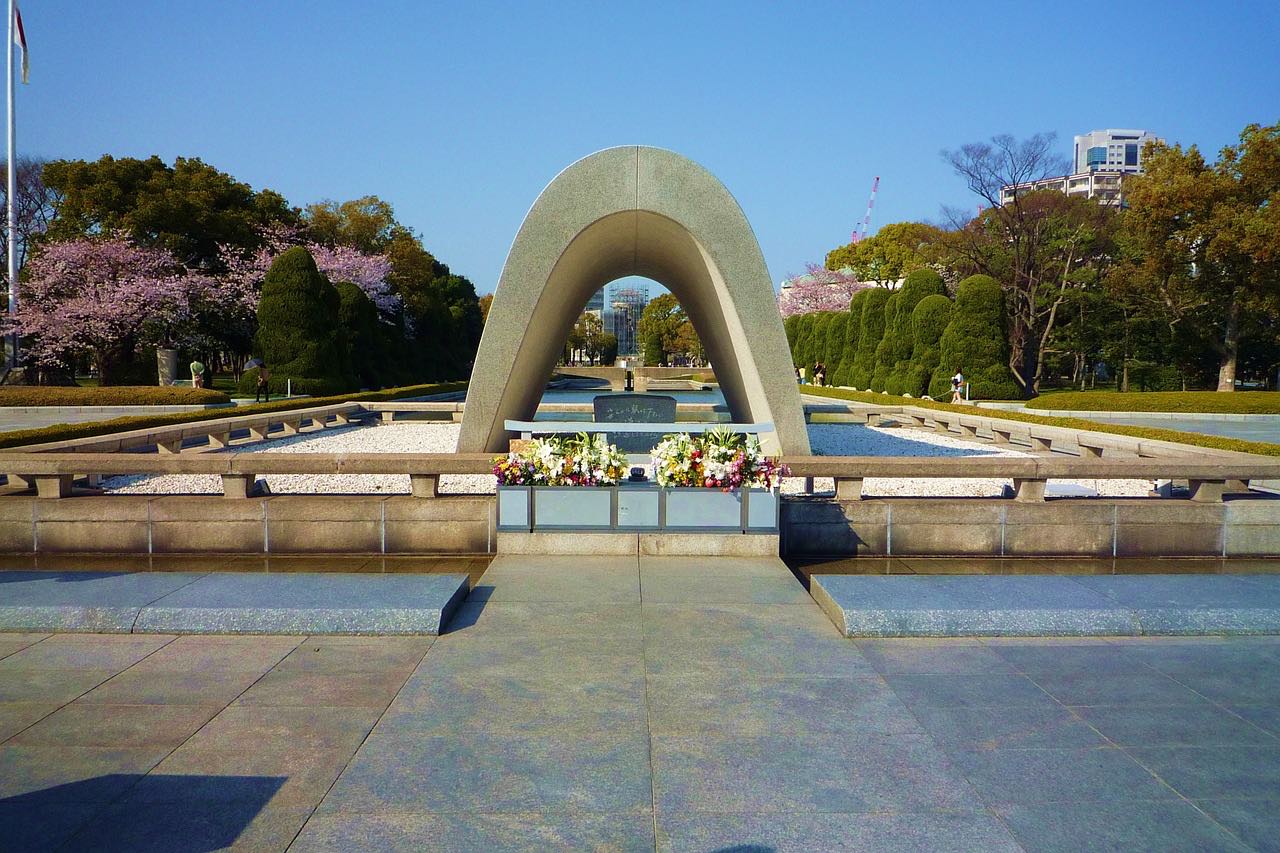 The focal point of the Park is the Memorial Cenotaph, inscribed with over 220,000 names of those who lost their lives, with new names added every year. Nearby is the Peace Flame which will burn until all nuclear weapons are decommissioned. Every year there’s a memorial service on August 6th, when wreathes are laid at the Cenotaph. A moment’s silence is observed at 8:15 am, the precise moment of detonation, temple bells ring, sirens wail and white doves are released.

An hour’s ferry ride from Hiroshima is another UNESCO World Heritage Site. The Island of Itsukushima, in the Seto inland sea, has been a holy place of Shintoism since the earliest times. The first shrine buildings here were probably erected in the 6th century. The present shrine dates from the 13th century and locals call the island Mijajima which means “Shrine Island”. 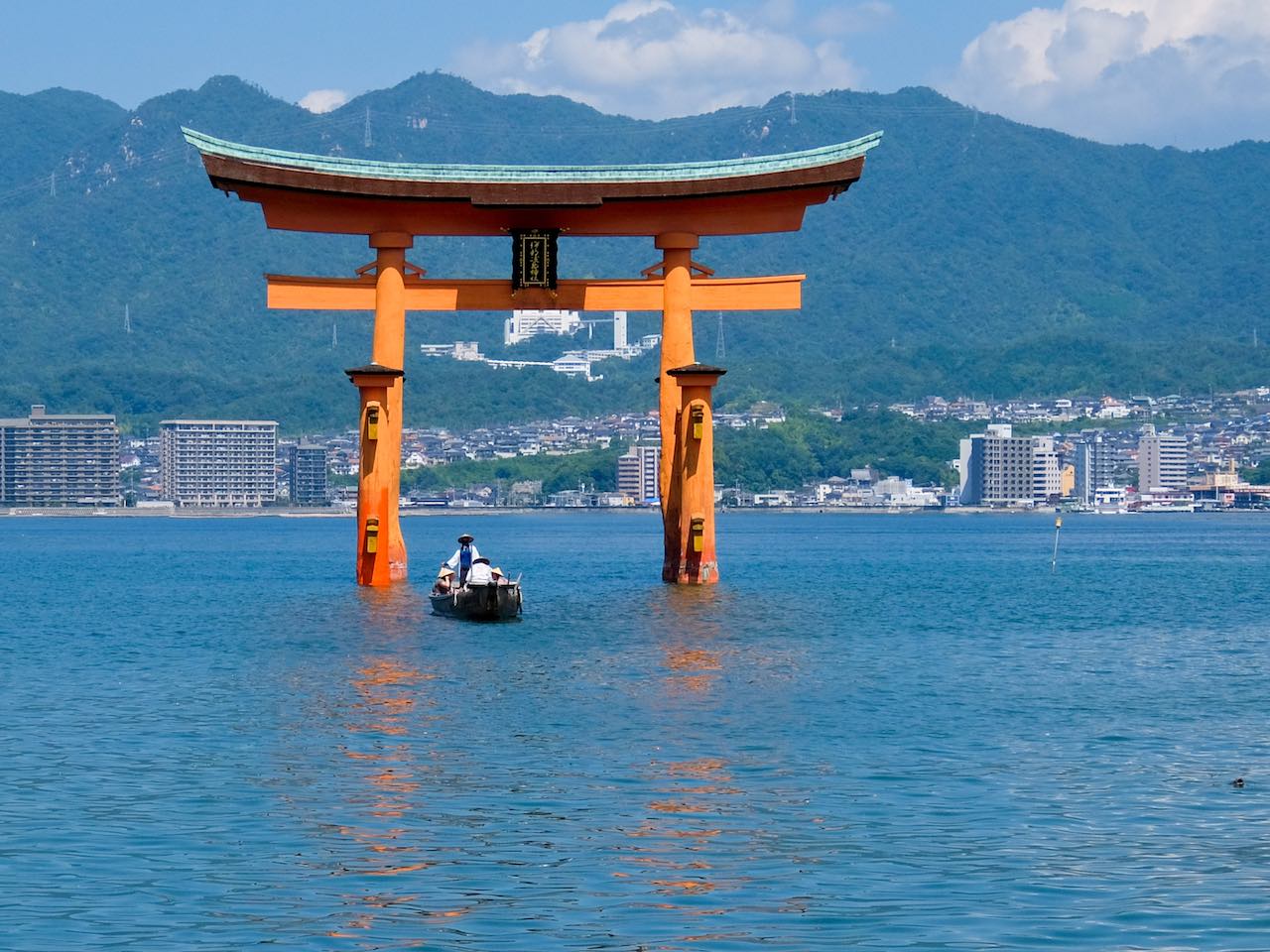 As I arrive, I pass the six pillars of the red entrance or Torii Gate, standing 16m tall and weighing 60 tons, rising from the sea. Surprisingly the pillars are not buried in the seabed but use their own weight to keep them standing. Historically, pilgrims had to steer their boats through the Torii before approaching the shrine. My ferry is rather too large to pass through but there are boats for hire if you’re so minded.

The island itself was considered so sacred that, to preserve its purity, only monks were allowed to walk on its hallowed ground. The shrine was built on piles on the water, floating separate from the land, so pilgrims could pray. The complex consists of multiple buildings, including a prayer hall, a main hall and a Noh Theatre stage, all connected by a series of boardwalks. In spite of the crowds, it’s a serene place and the lack of doors and walls exaggerate the sense of space. 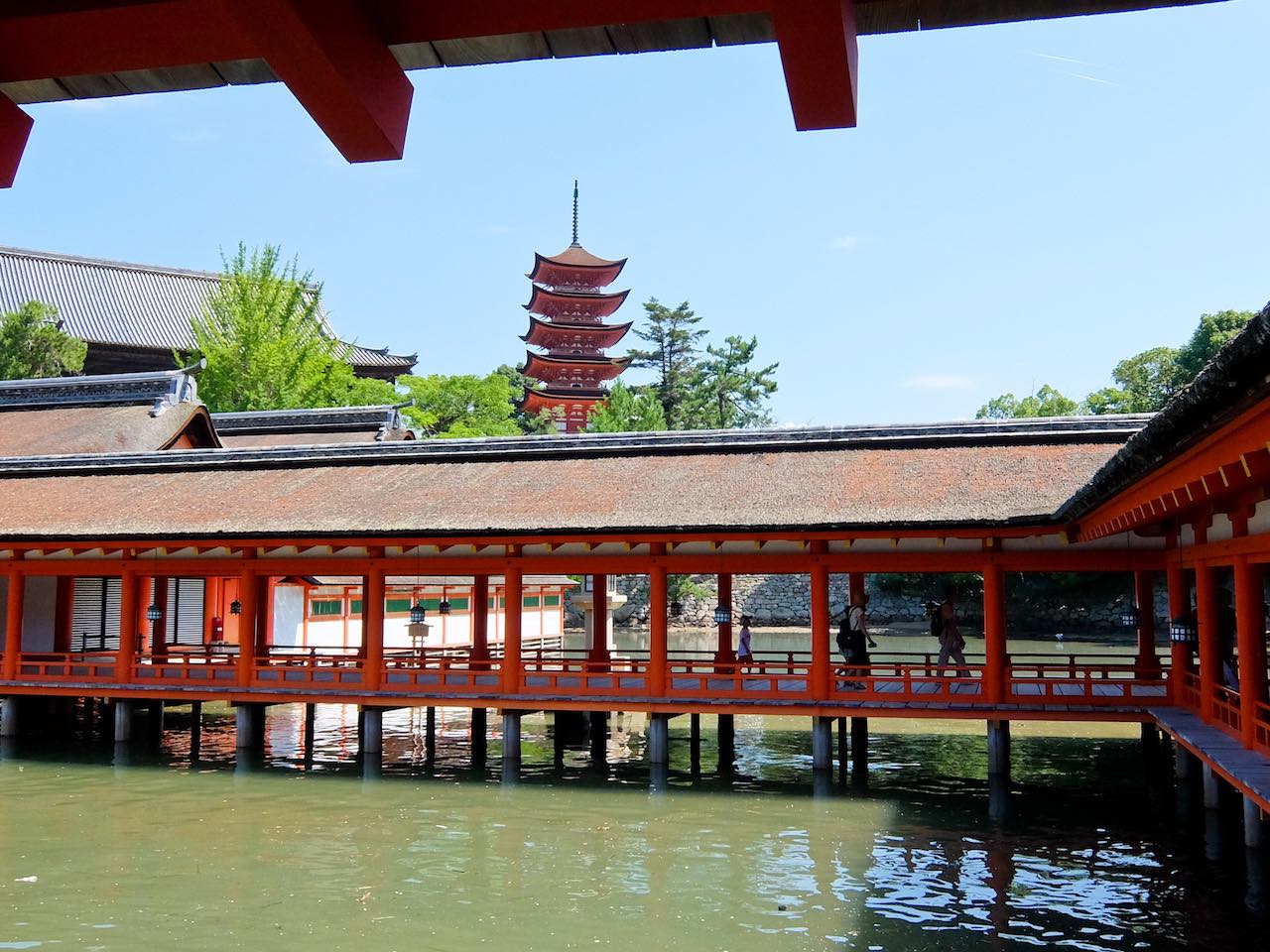 These days, pilgrims are allowed on the island. Most people climb the 500m Mount Misen, the highest point of the island, either on foot or by a couple of cable cars. It’s too hot for me so I content myself with visiting the Shinto temple of Daishoin, built on a slope. It’s still a bit of climb and the steps are lined with rows of metal prayer wheels which you turn as you pass. Inside a priests conduct religious ceremonies with pilgrims presenting their written wishes to the gods.

Around 90 minutes by train from Hiroshima is the historic Kintai Bridge, spanning the Nishiki River in a series of wooden arches. It was built in 1673 to connect Iwakuni Castle, sitting on the top of Mt. Yokoyama, to Iwakuni town, after previous bridges had been washed away. It’s unique in the world and it’s thought that the idea came from China and nobody copied it because they didn’t understand the technology. 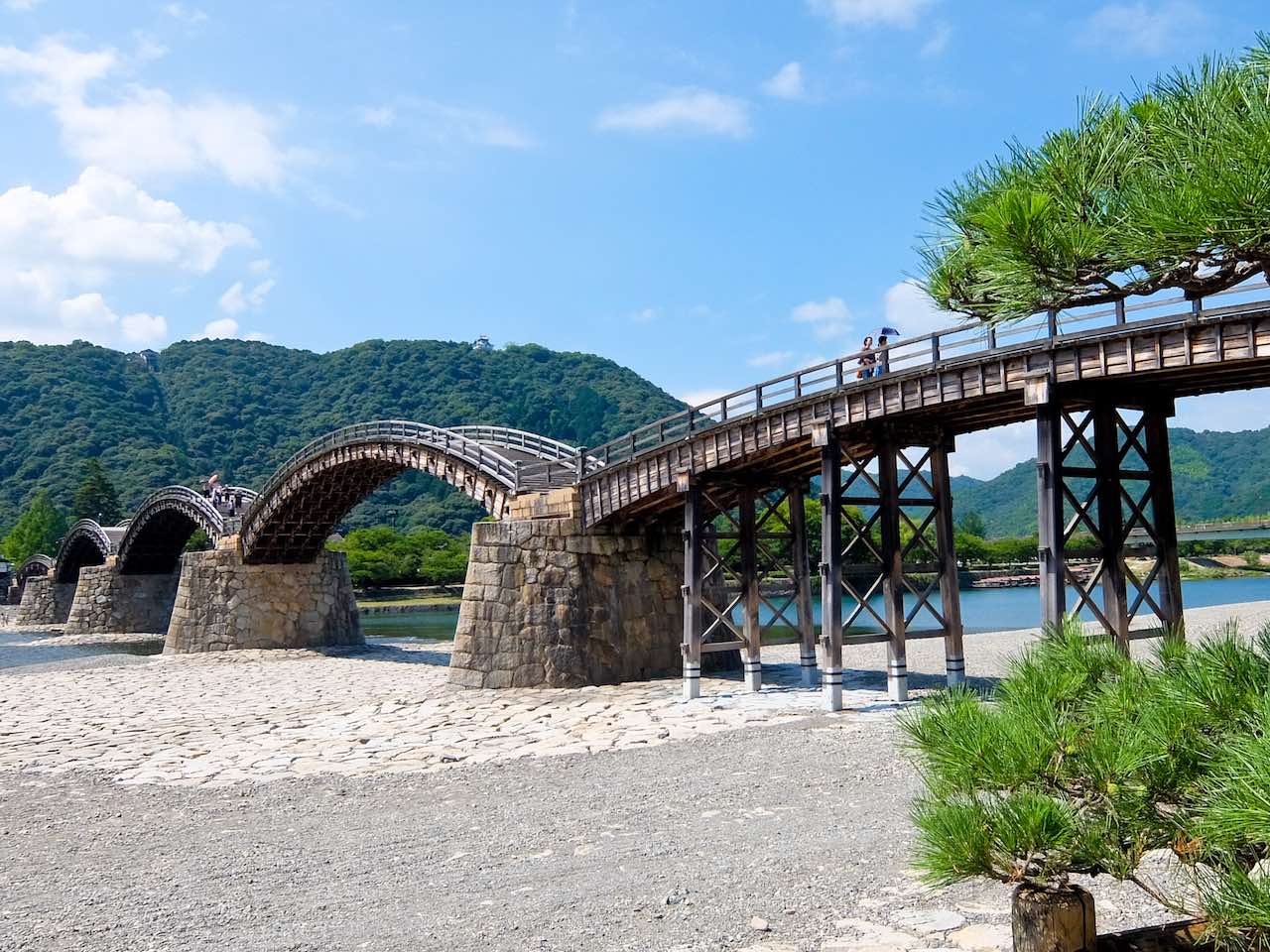 As I walk across I see the secret: the five arches sit on four stone piers as well as on two wooden piers rising from the dry riverbed where the bridge begins and ends. Regular maintenance was essential – every twenty years the middle spans were replaced whilst the outer ones connecting to the banks were replaced every forty. What’s extraordinary is that no nails were used, rather the wooden parts were carefully fitted together and secured using metal bands.

For the first 195 years of its history, until the dismantling of the feudal system after the Meiji Restoration of 1868, only lords and their vassals were permitted to use the bridge. Unfortunately, in 1950 the bridge was washed away during Typhoon Kijia, but was rebuilt in 1953.

As I get to the over side, it’s like stepping back into old Japan, with the grounds of the ruler’s former residence now turned into Kikko Park. It includes museums, fountains, samurai houses, the Kikkawa family shrine and glass cases containing the mysterious sacred white snakes. They’re albino with red eyes and white scales, and grow to be 180 cm long and 15 cm in diameter. It was believed that they were messengers from Benten, the goddess of wealth.

Cormorant fishing is big here. Fishermen in traditional costume tow wooden boats onto the river at night with a torch placed at the front of each boat to attract the fish, usually a variety of small trout. They release the cormorant into the water with a rope attached to its neck and once it catches a fish, the fishermen pull the bird in and make it spit the fish out.

90 minutes west by bullet train is Shimonoseki, Japan’s Fugu capital. Its Haedomari market specializes in the infamous Japanese killer fish, famed both for its high price tag and lethal insides. One Fugu is a hundred times more poisonous than cyanide, containing enough toxin in its liver to kill five men.

Of course, scattered around the port are restaurants that specialise in this killer fish, all licenced to give their customers peace of mind. You know where to go as there are outsize cuddly replicas sitting on the pier where tourists get their picture taken. That’s not enough for me so I take my life in my hands and go for a special Fugu set meal. 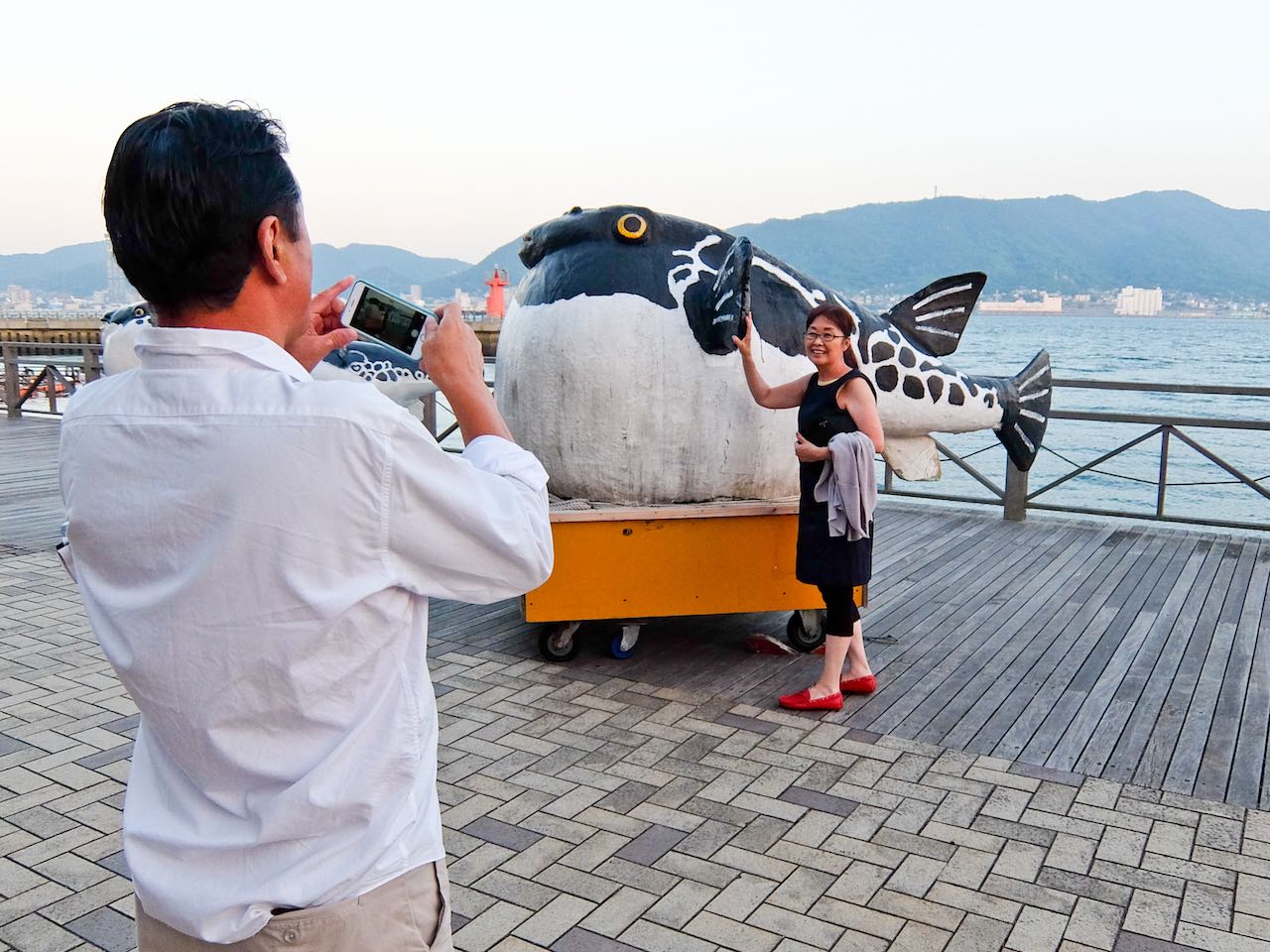 First of all it’s a tiny grilled fillet with vinegar sauce, followed by shredded skin with salad and fish eggs. I’m thinking it’s not tasting of much, and this is confirmed when I get a trio of fine sashimi, slices cooked with chilli and green onion and more shredded skin. More substantial is a fried fillet, with a consistency reminding me of frog’s legs. Finally there’s a steam pot, consisting of any fish trimmings with cabbage and veg. 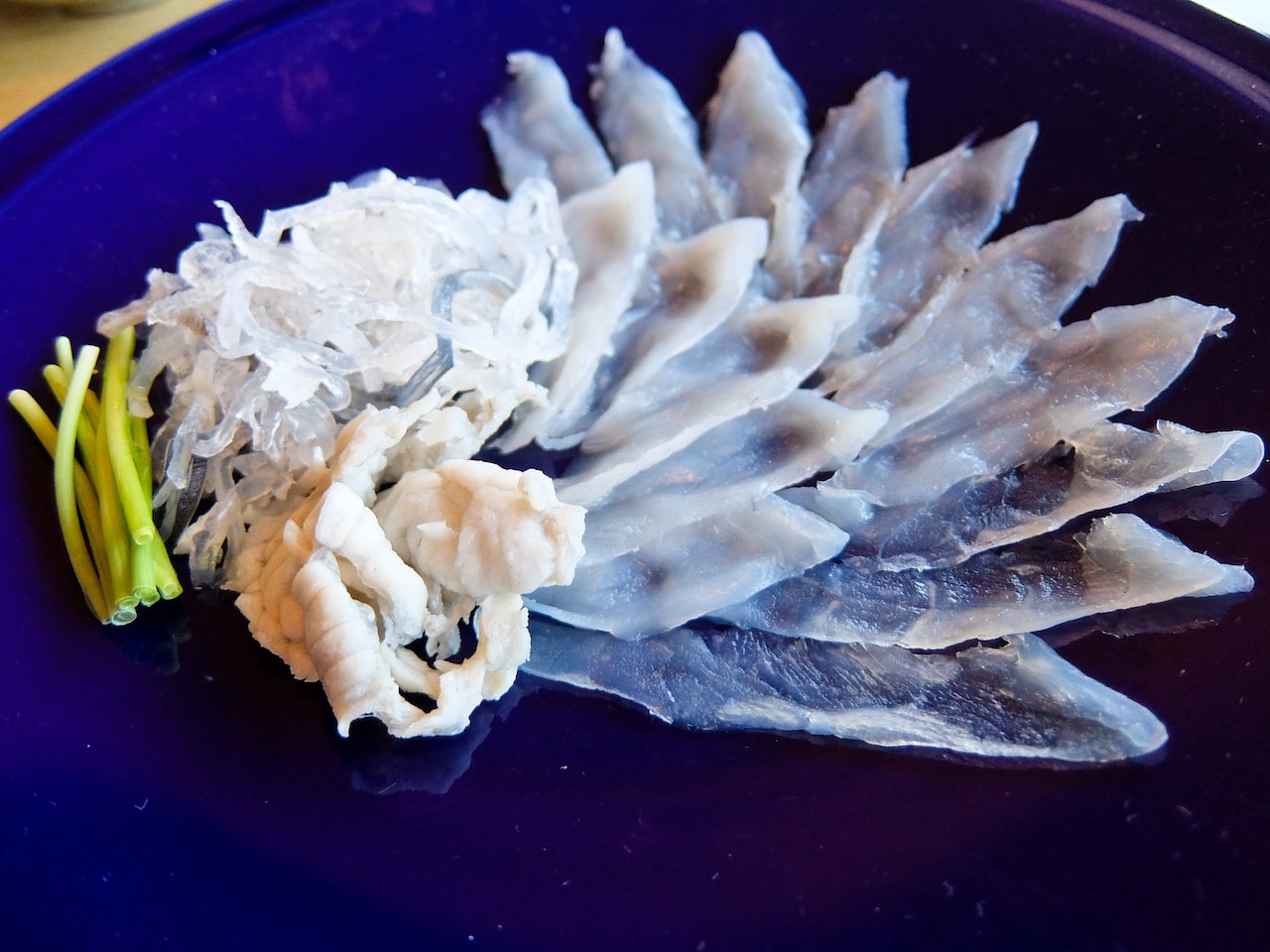 On the train back to Hiroshima, I seem to be suffering no ill effects so, before I fly home, I try the city’s version of Okonomiyaki. Now I’ve eaten this cabbage pancake before in Osaka where all the ingredients are mixed into the batter and then fried. Here in Hiroshima, you start with a thin layer of batter on the hot plate before layering cabbage, topping with bonito flakes, green laver and okonomiyaki sauce plus slices of pickled radish and chopped green onions. Give me this over Fugu fish any day. 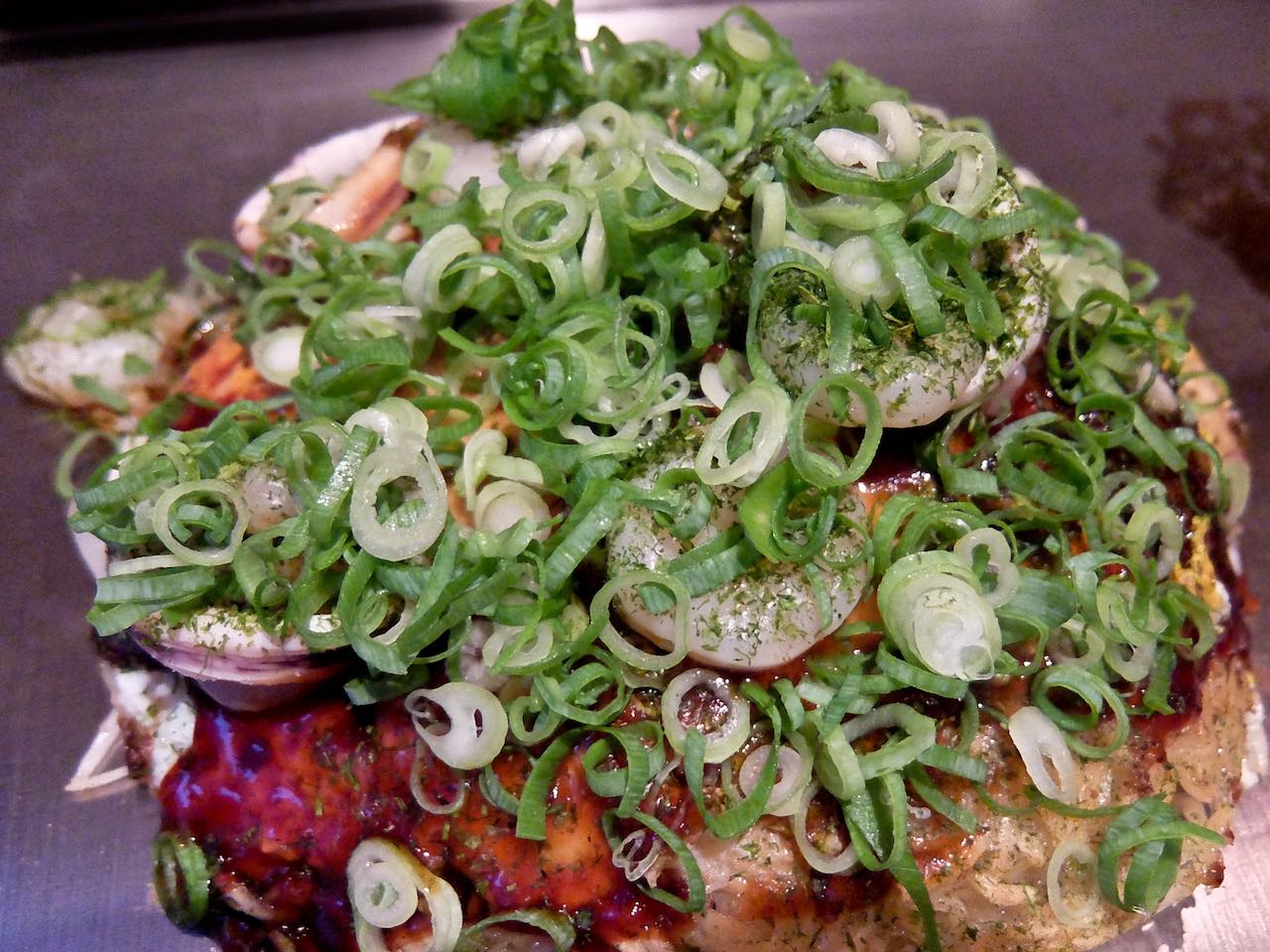 STAY: The Grand Prince Hotel makes a good base in Hiroshima, by the water.