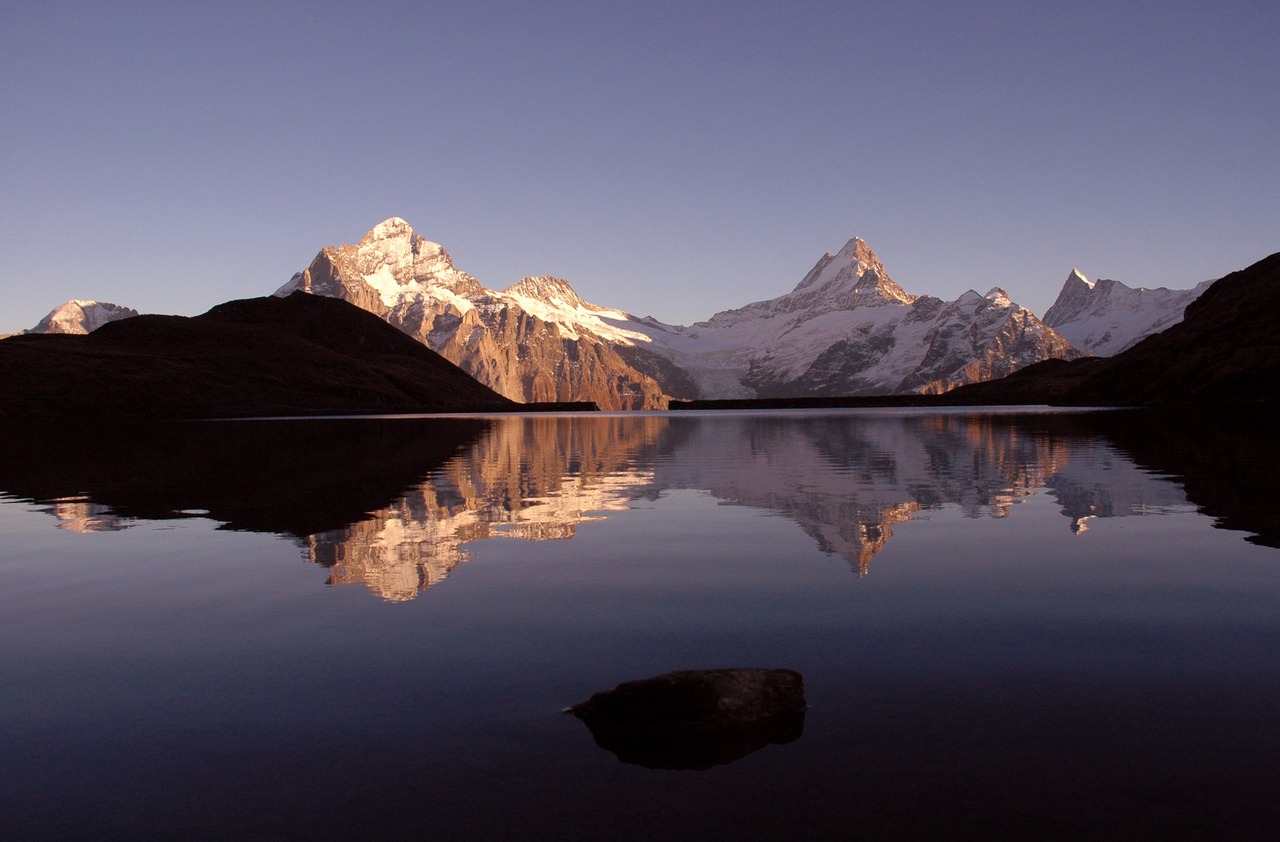 The spectacular alpine region of the Bernese Oberland in Switzerland has proved the inspiration behind many timeless poems, novels and even films.

Two and a half hours from Zürich airport by train, the Bernese Oberland has, for centuries, spurred writers from Sir Arthur Conan Doyle, JRR Tolkien and Lord Byron to Johann Goethe and Ian Fleming to reach for their pens and rhapsodise about the most breathtaking mountainous area on the continent.

Here are the top 10 places in the Bernese Oberland that have inspired the literary greats. Miss them at your peril! 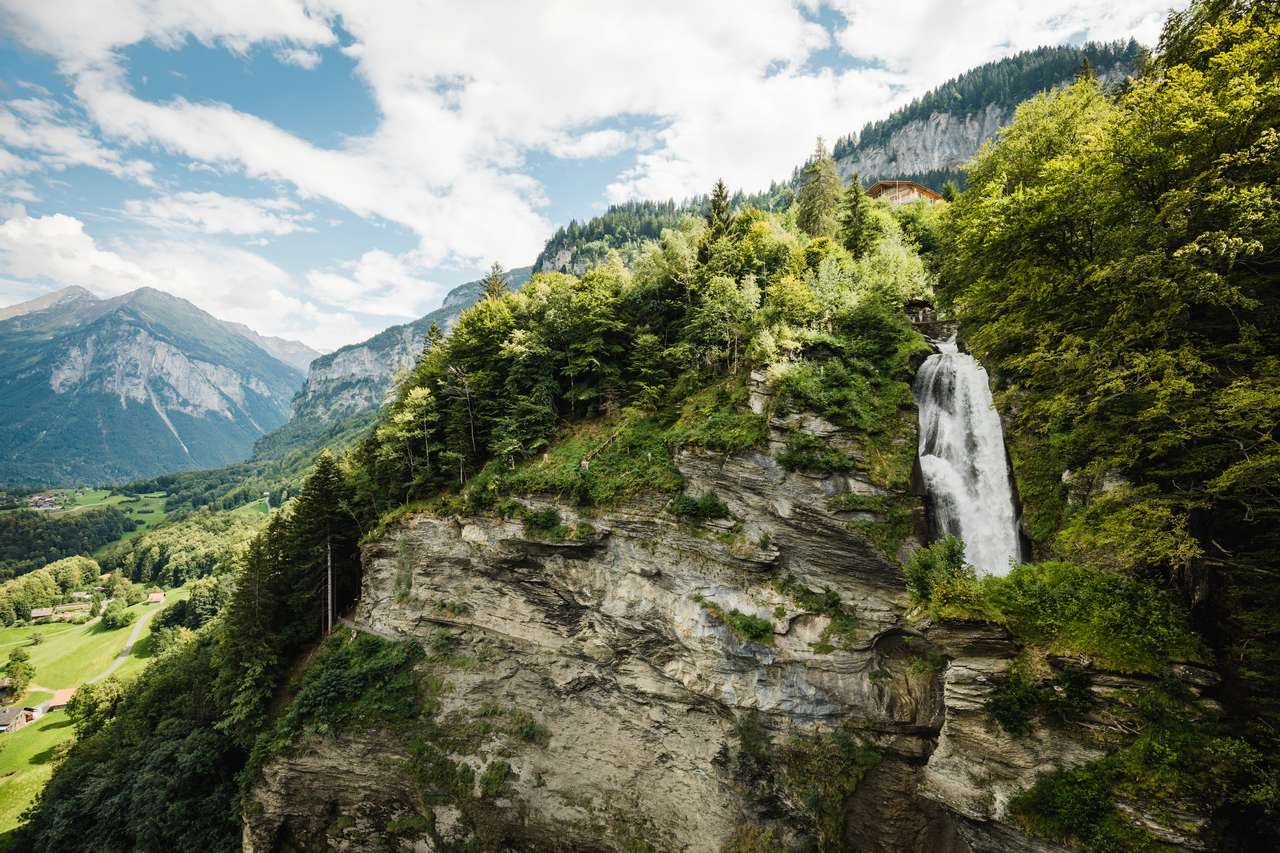 The Reichenbach Falls is a 300 meter high cascade of seven waterfalls in Schattenhalb. c. Switzerland Tourism

Perhaps the most celebrated literary location in the Alps, the Reichenbach Falls in the Hasli Valley is where Conan Doyle set the climactic struggle between the world-famous detective, Sherlock Holmes, and his arch nemesis, Professor James Moriarty.

The dramatic fight saw them both plunge into the ferocious waterfall to a (seemingly) certain death. Much to Dr Watson’s shock, Holmes miraculously reappeared in London three years later.

Standing at the top of the awe-inspiring 250-metre-high waterfall, it is very easy to see how it fired up the author’s imagination. If you fell into what Watson memorably described as “the dreadful cauldron”, there would be no chance of you coming back.

The Reichenbach Falls is now a site of pilgrimage for Sherlock fans from every corner of the globe. Every year the Sherlock Holmes Society meets in full period costume on 4 May, the day Sherlock “died”, to commemorate their hero.

In 1891 Conan Doyle spent several days at the Hotel des Alpes in Meiringen, which commands a fabulous view of the waterfall. It is here that he found his inspiration for the climactic scene of “The Final Problem”, which was published two years later.

In the story, Holmes and Watson spend the night before his “death” in the Englischer Hof Hotel in Meiringen. Holmes’s presence in the pretty Alpine village – which also claims to be the place where the egg-based dessert, meringue, was invented – has been memorialised with a pub called the Sherlock Lounge, a statue of the great sleuth, a type of fondue (!) and only the second Sherlock Holmes Museum in the world (after the one in Baker Street in London.) The museum in Meiringen is notable for its exact reconstruction of Holmes and Watson’s sitting room. 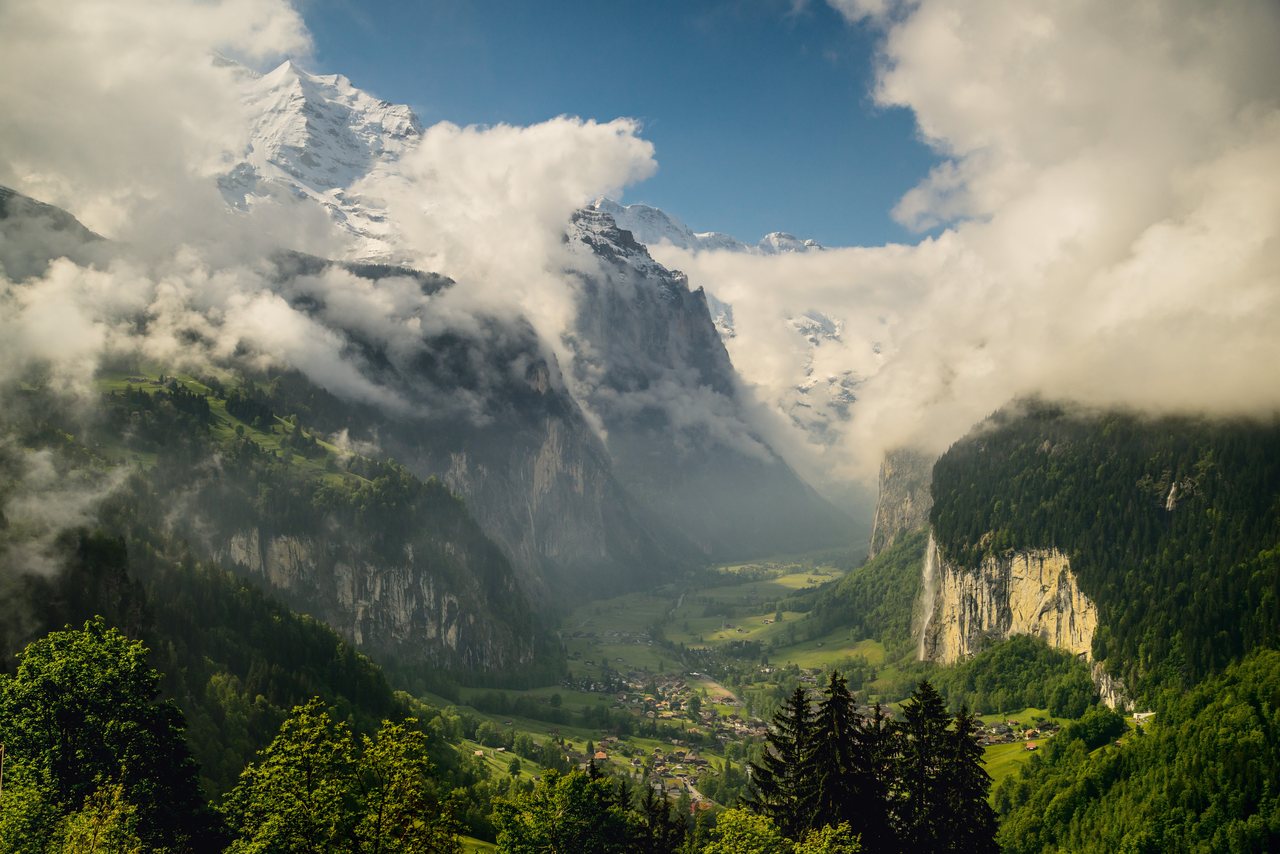 Lauterbrunnen is situated in the Alps, between gigantic rock faces and summits. c. Switzerland Tourism

Tolkien visited the astonishing Lauterbrunnen Valley in 1911. With its sheer cliff walls and 72 thunderous waterfalls, it possesses a compelling, primal beauty.

Many people imagine that Tolkien was inspired by New Zealand, which provided such a splendid backdrop in Peter Jackson’s films, but in fact he utilised the Alps as the basis for his fictional Middle Earth.

It is no surprise that the author employed the ethereal Lauterbrunnen Valley as the model for the heavenly Rivendell, the home of Elrond and his council, in both The Hobbit and The Lord of the Rings.

The three mighty peaks overlooking Lauterbrunnen Valley inspired Tolkien for his creation of the epic 4000-metre-high mountains above Khazad-dum, the dwarf colony in The Lord of the Rings.

In the book, the Silberhorn is referred to as Silvertine or Celebdil, the Rottalhorn is called Caradhras and the magnificent Jungfrau is named Fanuidhol or Cloudyhead, as its summit is shrouded in clouds.

When he departed the region, Tolkien wrote that, “I left the view of Jungfrau with deep regret.” The peaks also feature in JK Rowling’s 2018 Harry Potter prequel, Fantastic Beasts: The Crimes of Grindelwald (a name taken from a nearby Swiss Alpine village.) 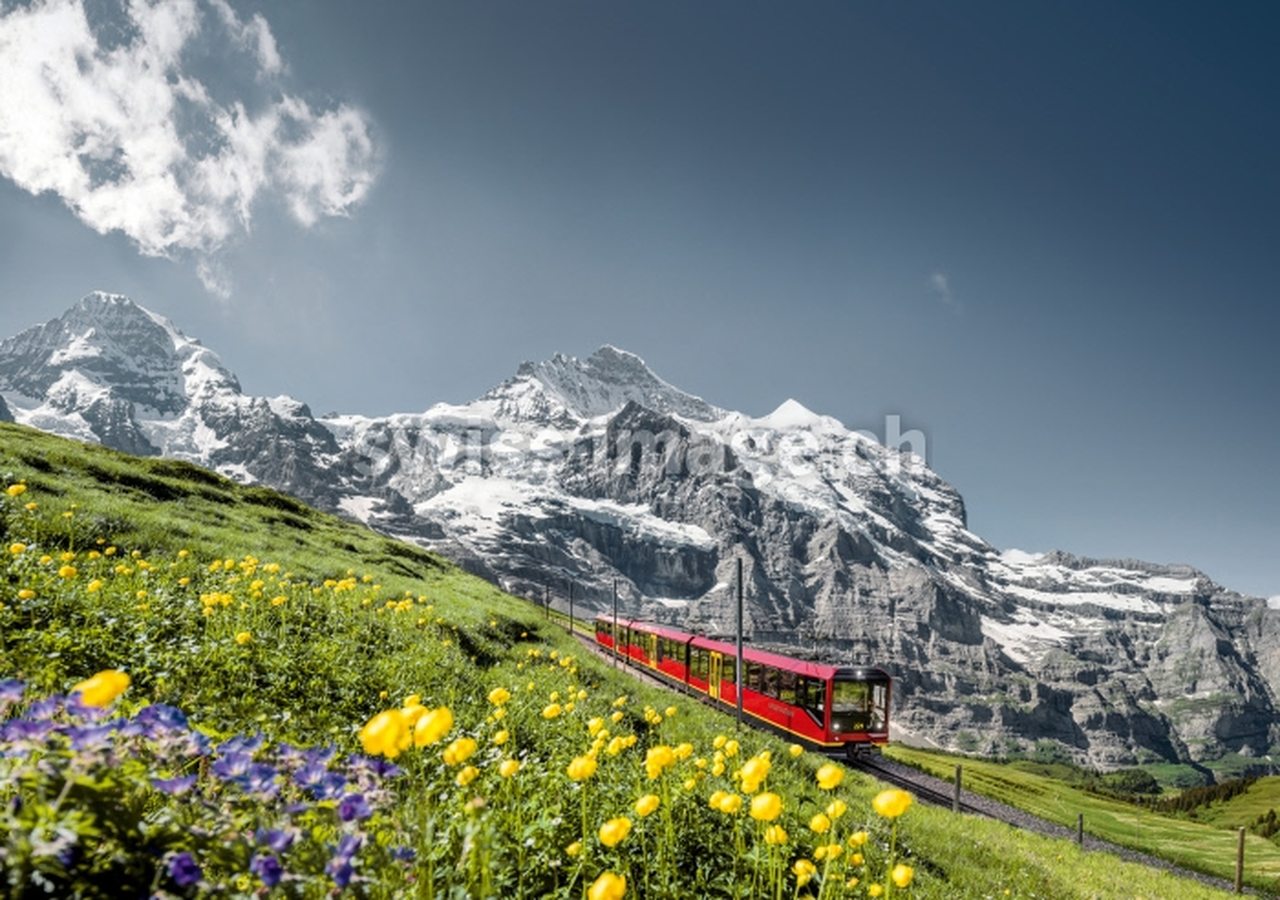 During the summer of 1911, Tolkien also witnessed the construction of the astounding Jungfrau Railway. He saw the workers drilling an incredible 7 km tunnel through the north face of the Eiger and the neighbouring mountain, Moench.

The Jungfraujoch, the terminus at the summit, sits at 3454 m above sea level and is the highest train station in Europe. Tolkien transposed the amazing construction of the Jungfrau Railway to the interlaced tunnels of the Mines of Moria in The Lord of the Rings. 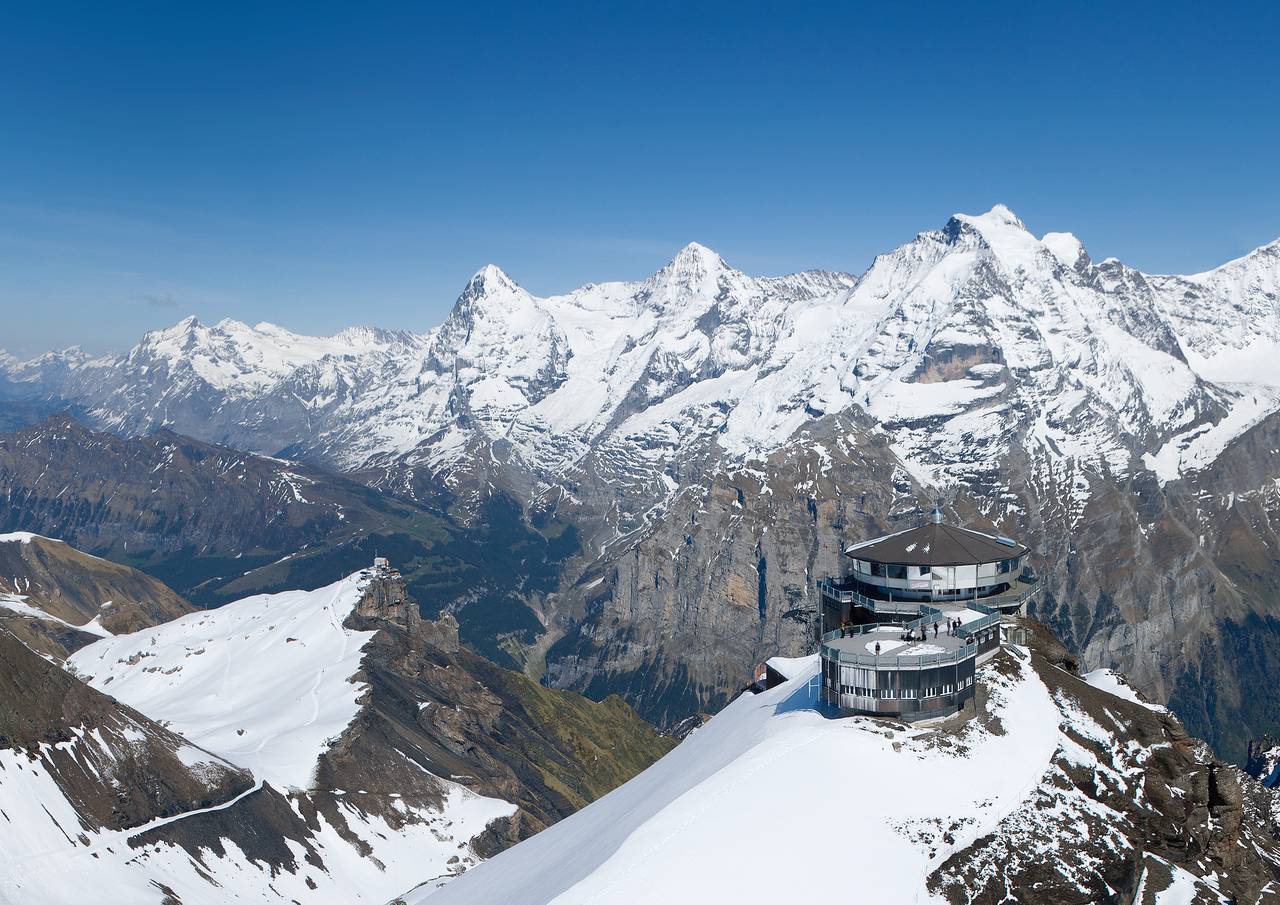 View of the revolving restaurant on top of the Schilthorn.c. by Interlaken Tourismus

One of the most famous James Bond villain’s lairs is the Piz Gloria at the top of the Schilthorn mountain in Muerren. This is Ernst Blofeld’s Alpine hideaway in the book and film of On Her Majesty’s Secret Service.

007 (played by George Lazenby, in his only outing in the role) goes undercover and infiltrates the allergy clinic which is a front for Blofeled’s HQ. However, Bond’s cover is blown when he is caught seducing women!

The building was only half finished when it was spotted by the movie’s location scouts, and the producers paid for it to be completed so they could use it in the film. Standing at nearly 3000 metres above sea level, the Piz Gloria is now one of the world’s highest revolving restaurants, and features a permanent 007 exhibition.

What do the staff at the Piz Gloria say to you when you arrive? We have been expecting you, Mr Rampton. 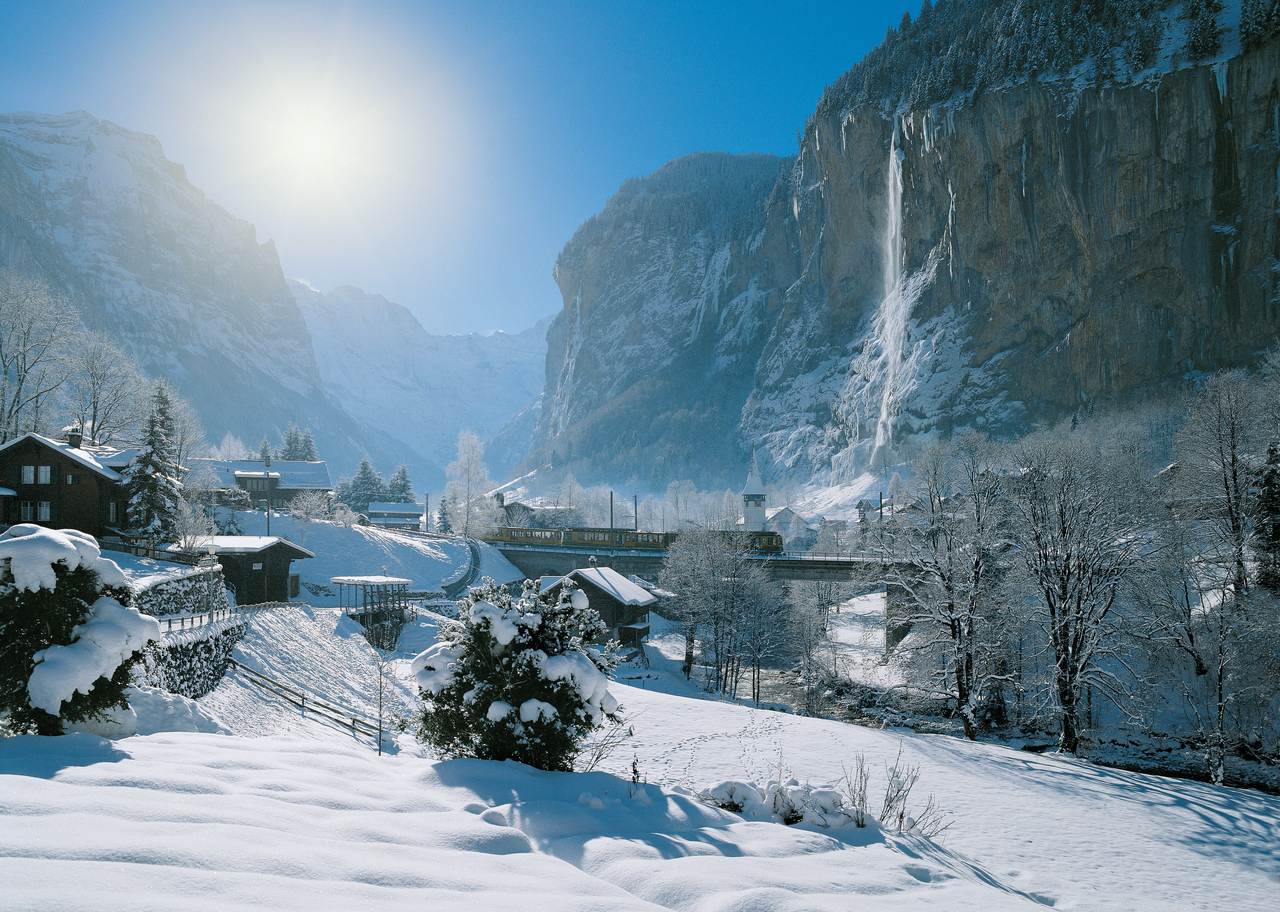 The village of Lauterbrunnen was also the location for many celebrated scenes from the 1969 Bond movie, including sequences involving a stock car race, an ice rink, a telephone box and a railway station.

The village also inspired the visiting Byron to write the poem, “Manfred”: “No eyes but mine now drink this sight of loveliness; I should be sole in the sweet solitude, and with the spirit of the place divide.” 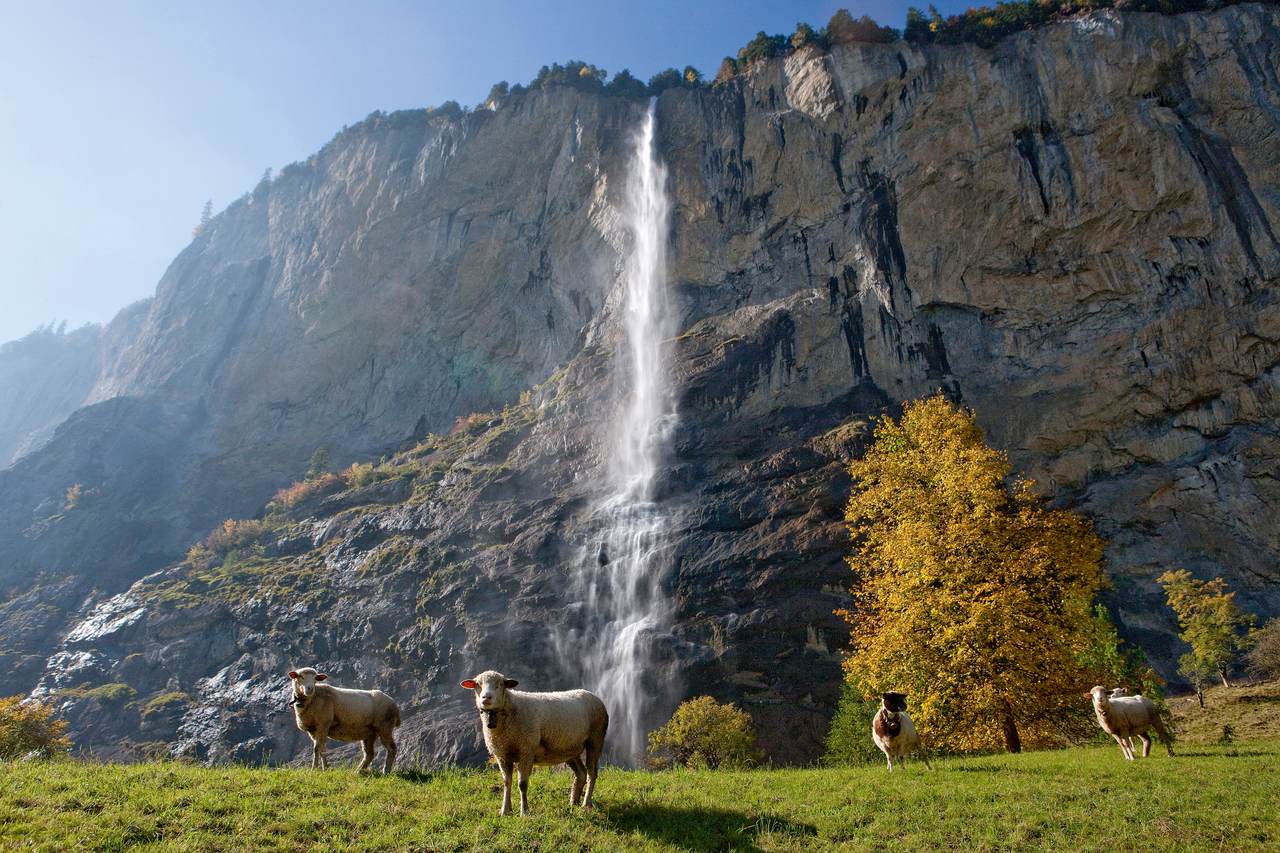 Lauterbrunnen village is the site of The Staubbach Falls as well. Falling from some 300 metres, this dazzling cataract is the highest free flowing waterfall in Switzerland. In the summer, warm winds agitate the waters so that they swirl in all directions. These sunlit droplets give the waterfall its name, as the word “Staub” means dust in German.

Goethe came to the waterfall in 1779 and was so moved that he wrote a poem, “Gesang der Geister ueber den Wassern” (Spirit Song About the Waters), that made it world-famous.

A classic of German culture, the poem acted like an 18th-century Instagram post and drew visitors from all over the globe. The poem is now inscribed on a stone at the foot of the waterfall.

Lake Bachalpsee in the sunset with Wetterhorn and Schreckhorn. c. Jungfrau Region

The poet came to the Jungfrau region in 1779 to escape from romantic woes back in Germany. He spent four weeks trekking in the area and particularly loved Grosse Scheidegg. He wrote a lot about the fearsome peaks that tower above it, the Wetterhorn and the Schreckhorn.

The latter translates as “Terror Mountain”, which sounds about right! In addition, Goethe waxed lyrical about the nearby Eiger, also the location of a rather less highbrow work of art, the 1975 movie, The Eiger Sanction starring Clint Eastwood. 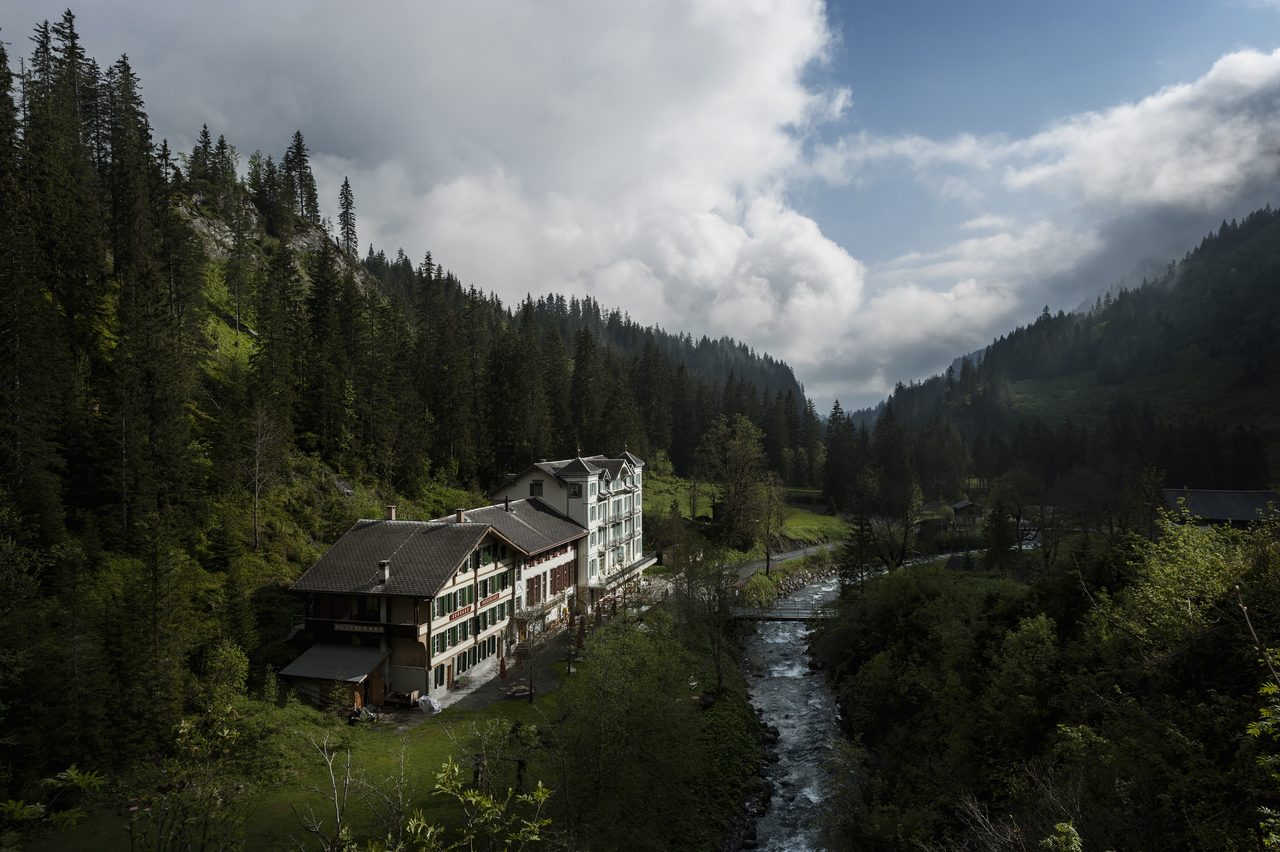 Goethe got about a bit in the Bernese Oberland. He also stayed at the renowned Hotel Rosenlaui, right by the UNESCO World Heritage Site of the Rosenlaui Glacier Gorge. This remote hotel a few miles outside Meiringen has over the past two and a half centuries also played host to an array of other literary greats, including Conan Doyle, Tolstoy, Mark Twain and Friedrich Nietzsche.

In “The Final Problem,” Holmes and Watson reserve rooms there (although, sadly, Holmes never gets to enjoy its charms). Hotel Rosenlaui is a gorgeous Belle Epoque establishment with more than a hint of Hotel Grand Budapest about it.

Set in a far-flung location in the smallest village in Switzerland, it is the perfect place for a “digital detox” with no phone signal, wifi or running water in the rooms. It is that very tranquillity which appealed to Tolstoy, who stayed there while recovering from the trauma of witnessing a man being guillotined in Paris.

STAY: Hotel Rosenlaui 387, Bern 3860. Room rates start at CHF 125 per person per night and include the evening meal and bus ticket. Visit www.rosenlaui.ch