Home WorldEuropeFinland An insane road trip through the Arctic Circle in a Mazda MX-5 with the roof down – Norway, Finland, Sweden
FinlandNorwaySwedenTravel Articles

An insane road trip through the Arctic Circle in a Mazda MX-5 with the roof down – Norway, Finland, Sweden 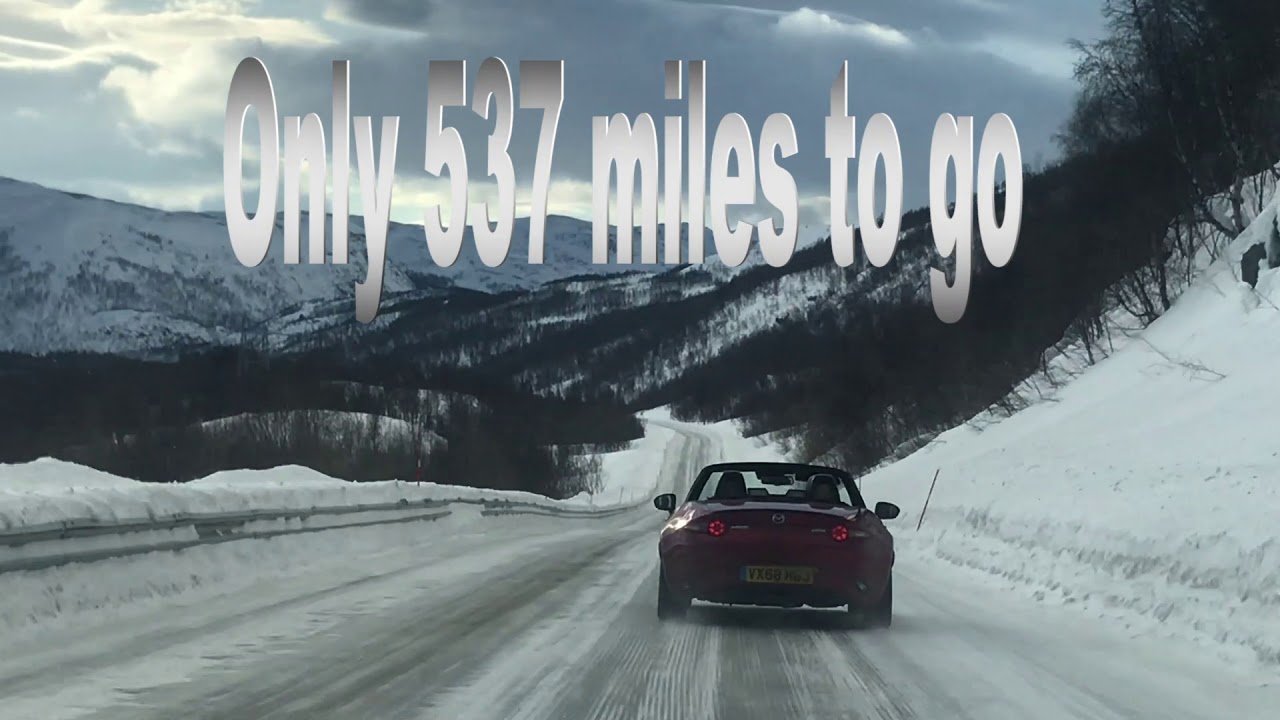 There are times when I say “yes” to a travel antic before I have actually thought it through. A 537-mile road trip across the Arctic in a Mazda MX-5 roadster with the roof down was one of those times. I packed my thermals and set off. 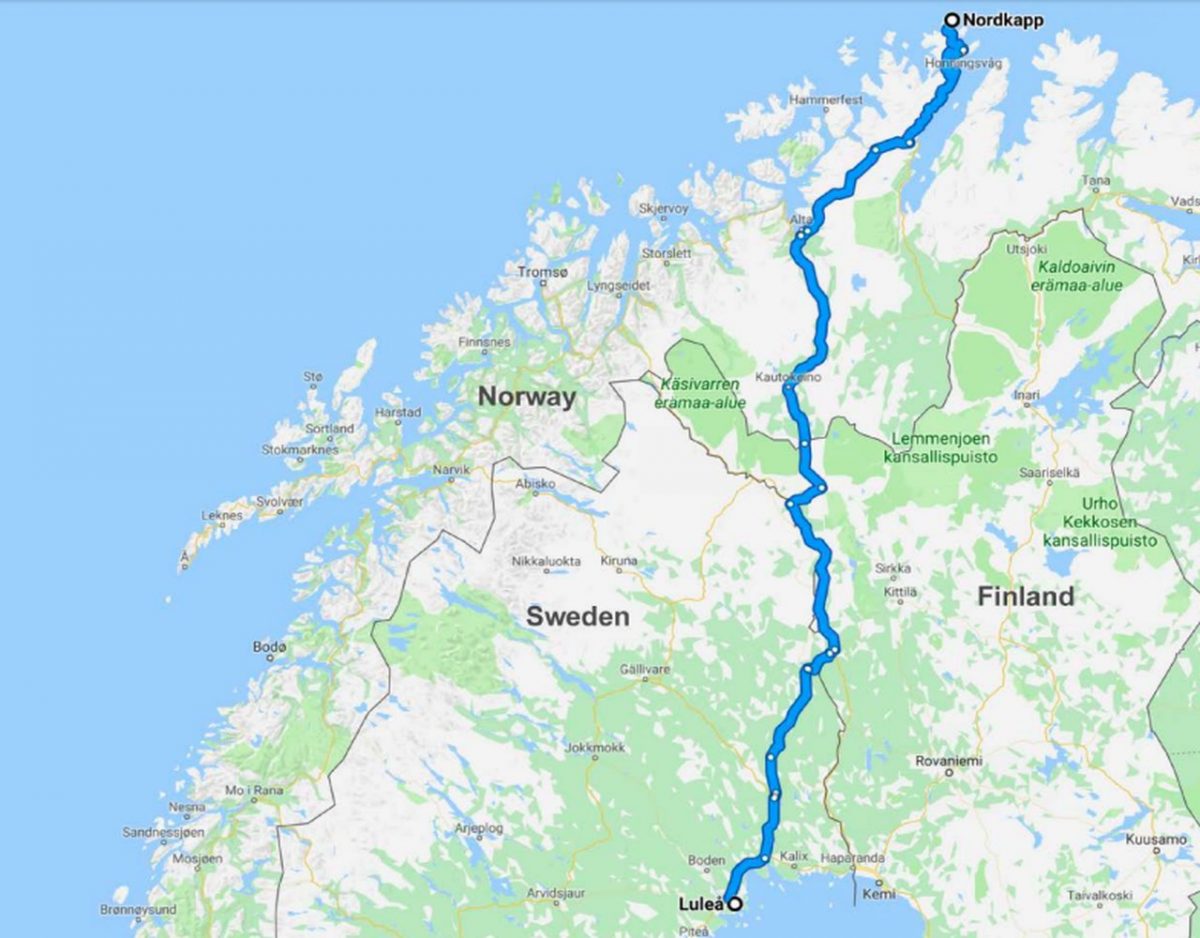 I flew into Norway’s capital Oslo from there boarded a tiny jet plane to the almost desolate snow-strewn airport in Honningsvag and disembarked into a shock of white.

I was excited to visit Nordkapp – North Cape – located on the island of Magerøya 35 kilometers away, to experience the bleak drama of a 300-metre cliff with a foreboding drop into the Arctic Ocean. The spot is the most northerly European point accessible by car – except on this night it wasn’t.

There had been so much snowfall that even the ever-present snowplough couldn’t get through. The road was closed and that expedition was cancelled.

It was to be an 6am start the next morning so that the drive from Norway passing through Finland and finally landing in Lulea in Sweden could be completed in a single day.

Yet again the trip was confounded by Mother Nature. This time it was an avalanche that had blocked the road out of Honningsvag. 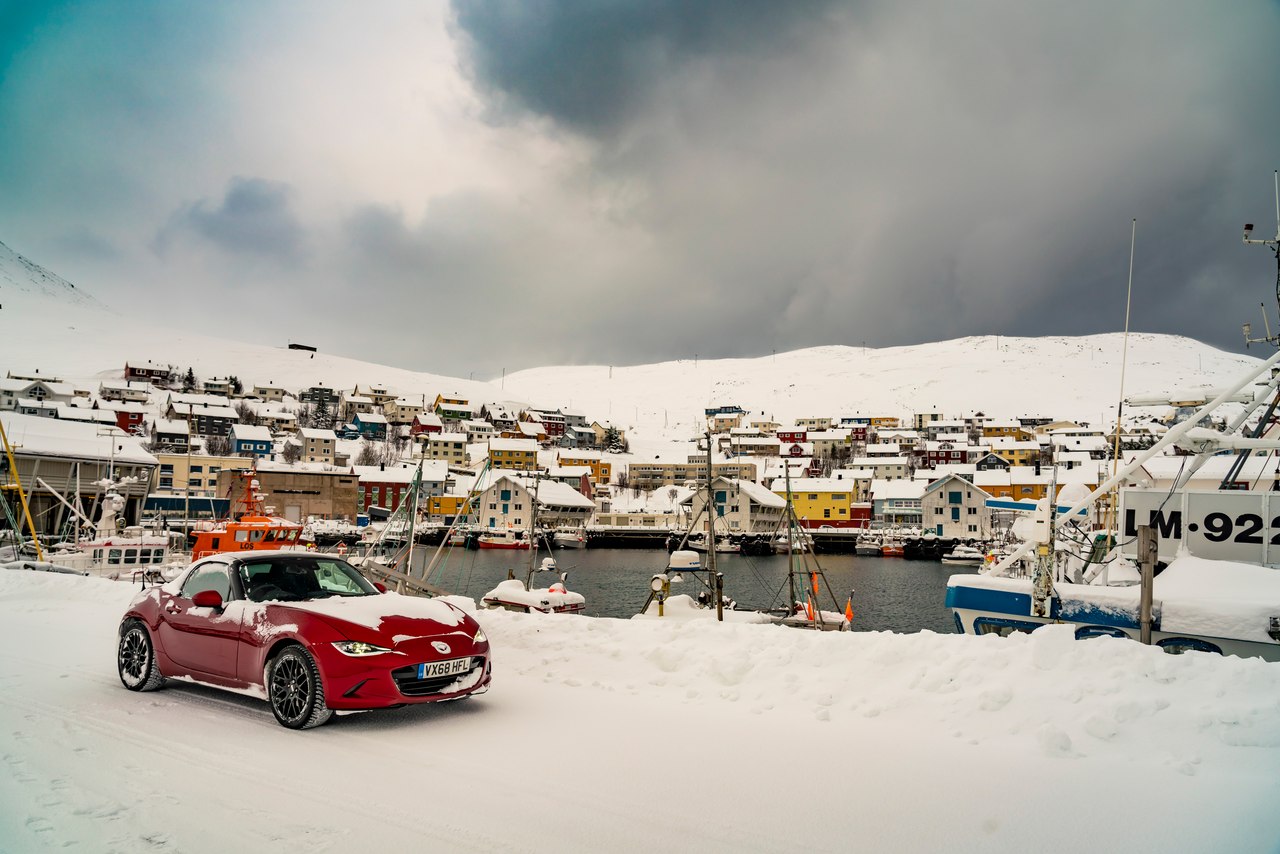 At last, at 10am I set off from this one-cafe town in a convoy headed by the snowplough. I had lost a few hours but not my enthusiasm and was keen to get behind the wheel to drive over snowy or even icy roads.

It sounded daunting but I had the uplifting accompaniment of the sun. It was all blue skies and orange rays that spoke of warmth but the chill in the air said otherwise. How long roof would stay down became questionable.

It was -20 degrees and I knew it would take us around 12 hours to pass through the three countries and no doubt during the last few hours the temperatures would fall as quickly as the evening darkness.

For now, the heated seats and car’s heating system was enough to keep me focussed as I headed to Olderfjord on the E69 road feeling the wind and seeing it swirling the snow off the road. The Barents Sea looked black and demonic in the distance with the waters turning light blue as they hit the shore. 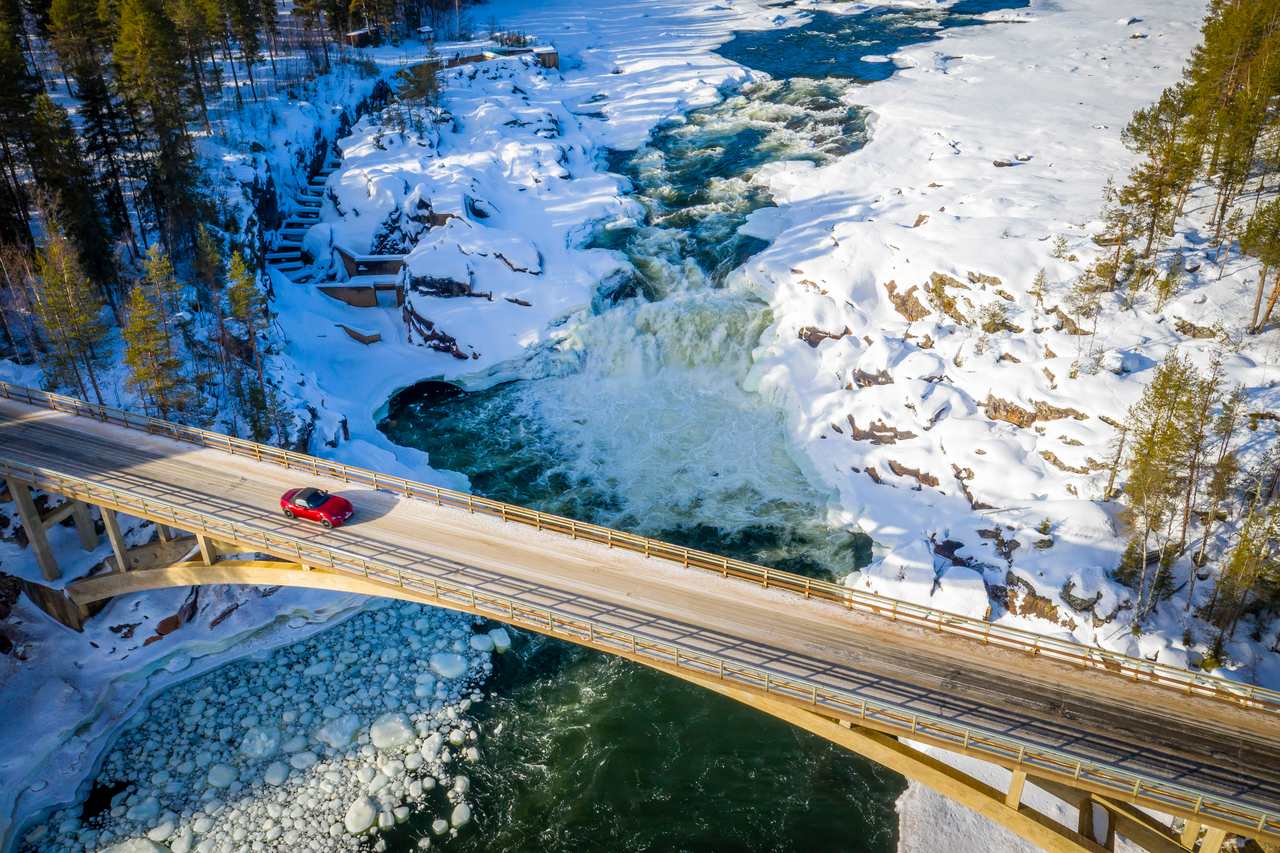 I passed through the lengthy Honningsvag tunnel that had been created out of the rocky Norwegian landscape. The light at the end of it opened up onto dramatic scenery which turned desolate at times. I followed the long single lane passing a frozen lake then dropping down into a valley towards Alta.

This was the world in monochrome with dots of colour courtesy of houses dotted here and there and trawlers that were testament to the fishing lifestyle of the locals. At times the landscape became abundant with trees and dark green graced the white.

Soon traffic had dispersed and it was as if the whole of the Norwegian wilderness was mine. All I had to do was to concentrate on the straights and curves of the coast and inland sweeps of the twist and often icy road. 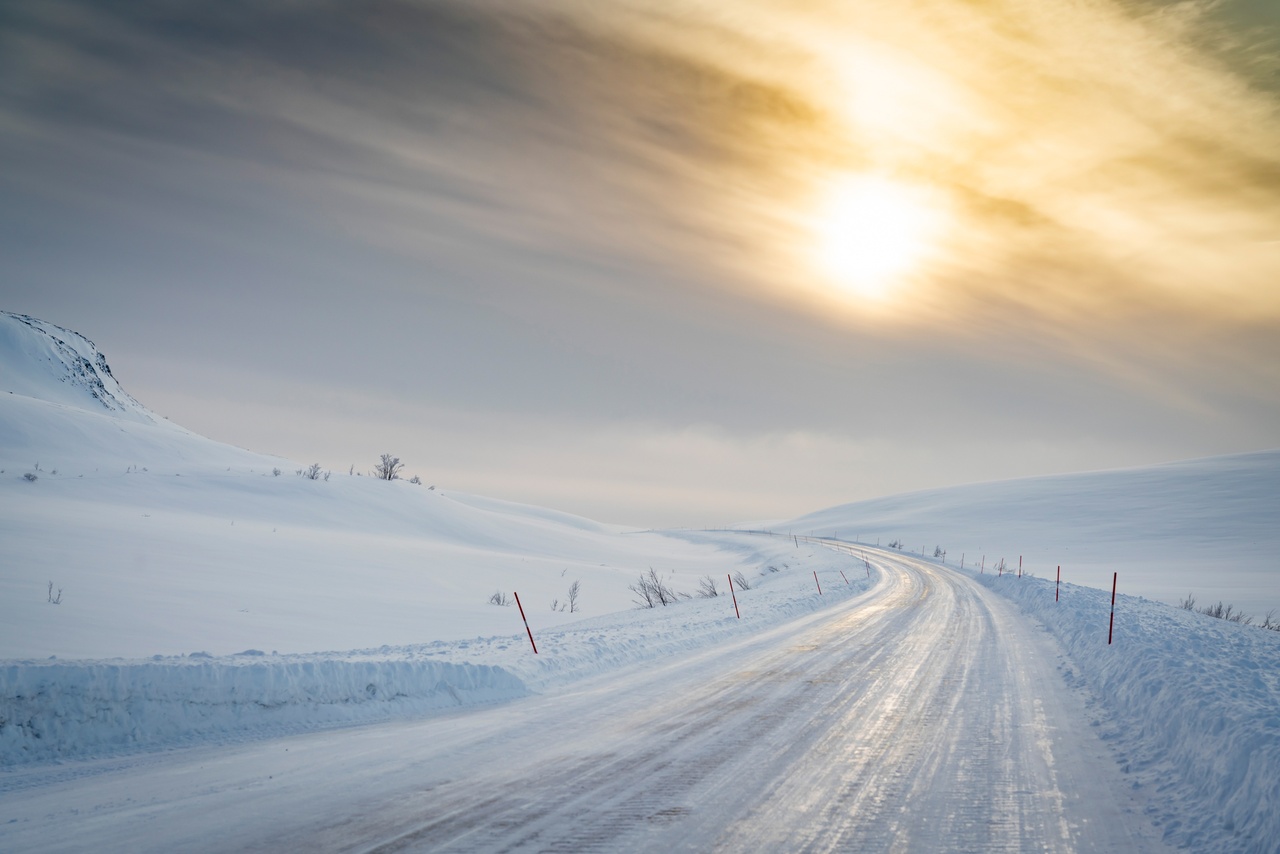 I passed through the Nordkap Tunnel, the deepest tunnel in Europe and got held up by traffic control watching over the traffic. The skies darkened with clouds and the landscape was literally whitewashed with snow, so bright I had to wear my shades.

It was becoming more windy and I was forced to close the roof. The landscape turned spooky as the wind whipped up fine snow and blew it along the tarmac like ghostly beings traversing the ground in search of who knows what. Visibility was now low. 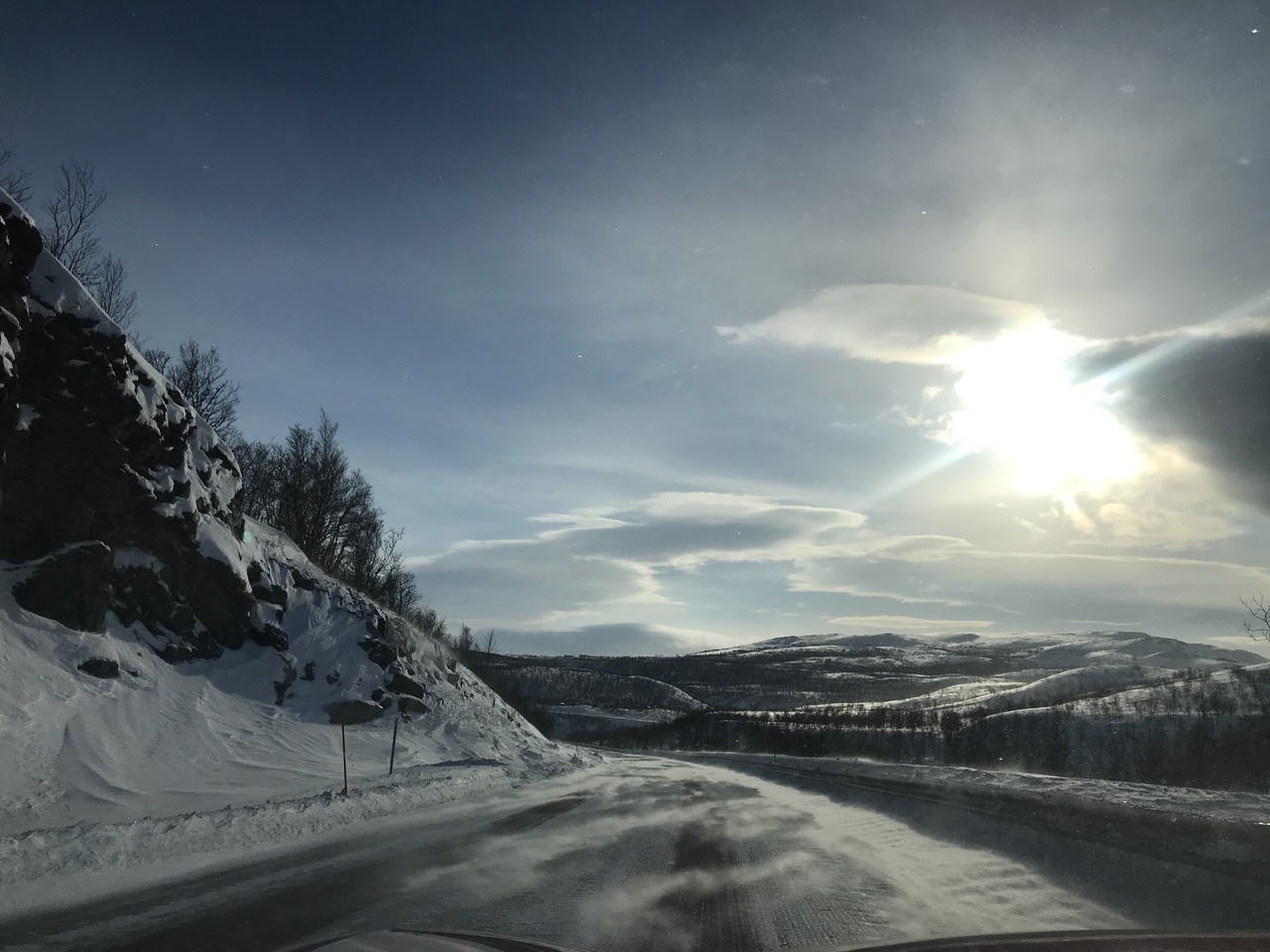 Spooky road in the Arctic circle

The E45 took me across the border into Finland.

Driving inland the colour of the road surfaced again and became hemmed with white trees and cliffs where once waterfalls fell but now the water had become ice. 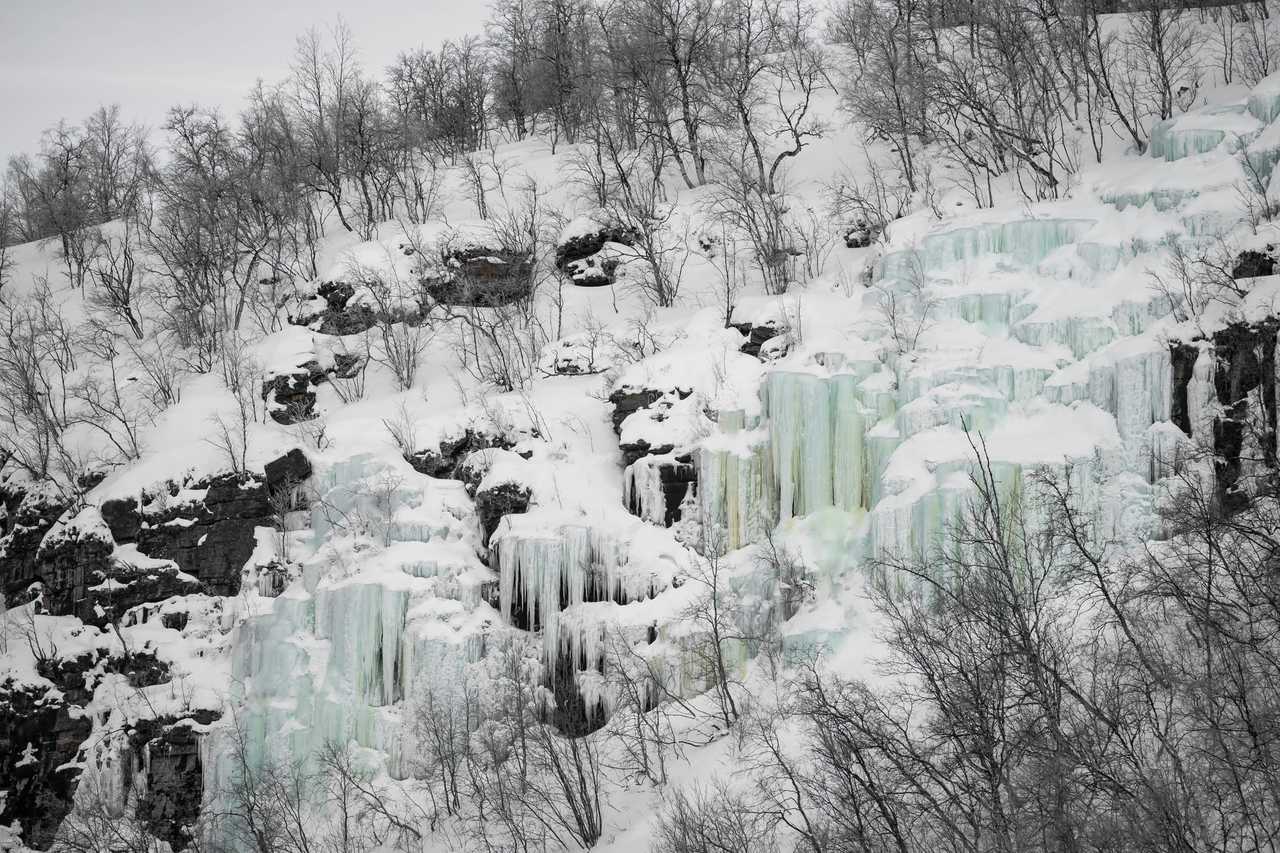 The weather took a turn for the worse and it felt unpleasant to be driving through a blizzard especially as the sun began to turn in for the day. I admit to the odd slip and slide but soon I was crossing another border to Sweden.

By now the sky was black and the the light from street lamps and headlights bounced off the white snow that covered road causing my eyes to boggle a little. 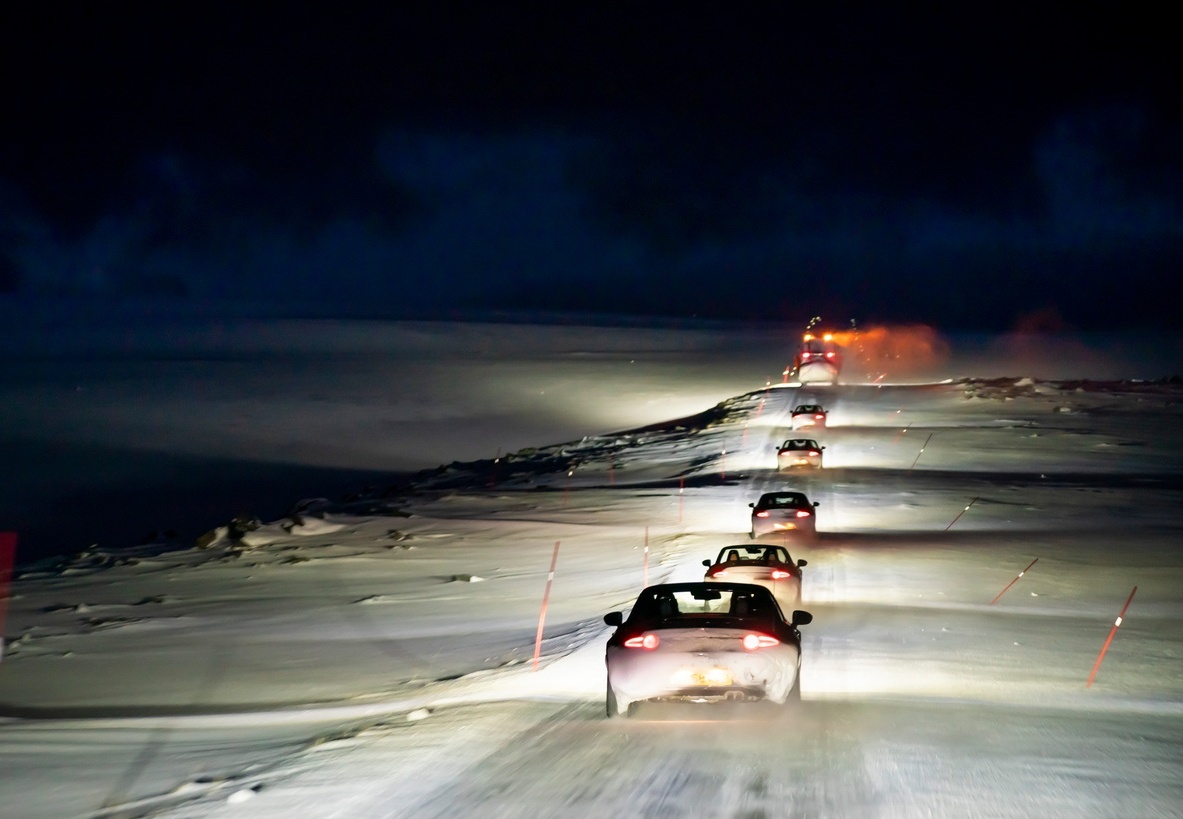 Thankfully the roads were wide dual carriageways and we easily found our way onto the E10 for a final whizz into Lulea. This progressive town is located on the Gulf of Bothinia 62 miles south of the Arctic Circle and is, incidentally, home to Facebook’s first data centre outside the US.

Snow began to fall again, but by now it was a matter of slowing down for fear of sliding right off the road thanks to hard ice. And that would have been a shame so close to home.