Kyrgyzstan, the heart of central Asia is a mountainous country, with 90% of its territory above 1500m and high peaks on its borders with China, Kazakhstan and Tajikistan. 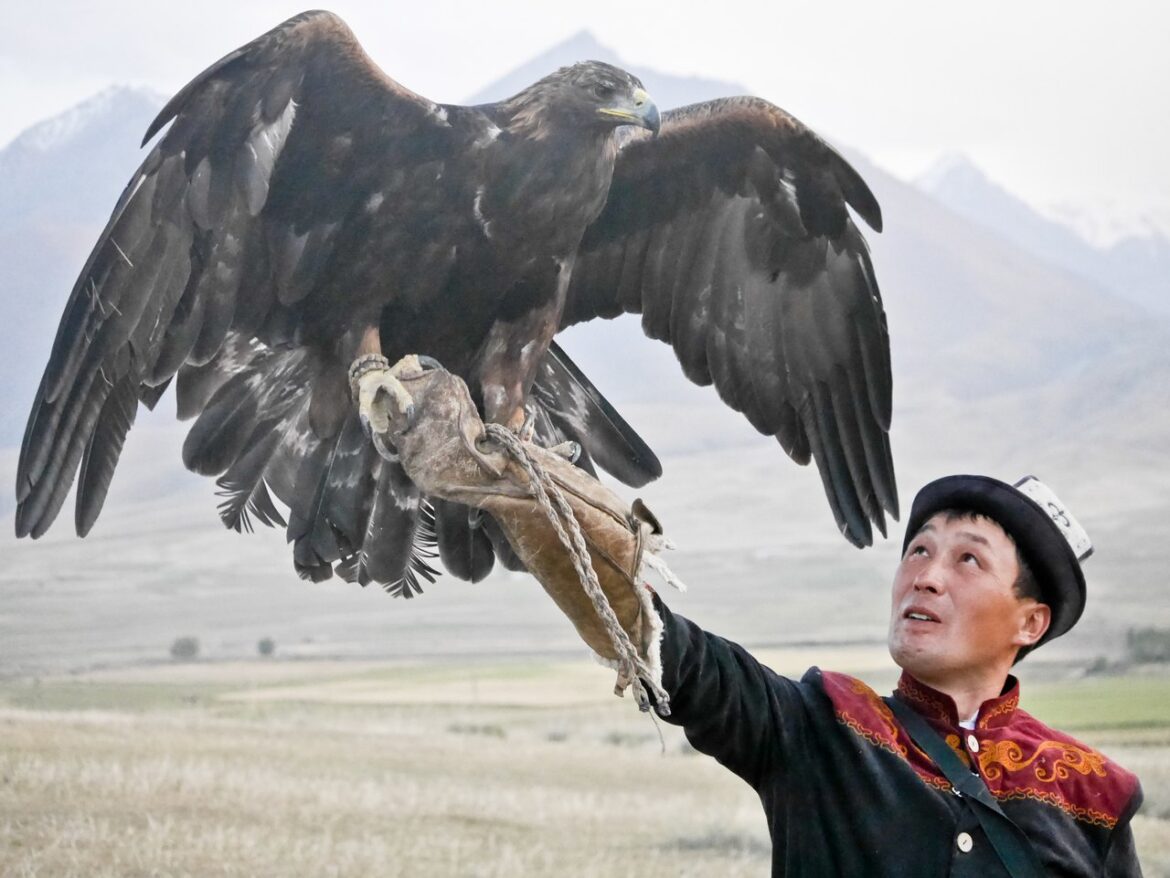 The ancient Silk Road connected China and India with the West and Kyrgyzstan was bang in the centre, a major stopping point for travellers and traders.

People here traditionally led a nomadic life, travelling on horseback as they drove their flocks in search of new pasture. This all came to an end when Soviet rule encouraged settlement in towns and cities.

Still, the spirit lives on, and this definitely a country for those who love the outdoors.

I start in Bishkek, the capital, known during Soviet times as Frunze, a modern city with wide streets laid out in a grid pattern. Unlike the rest of the country, it sits at a modest 800m and the climate is pleasantly Mediterranean.

There are few high-rises here and it’s surprisingly green with parks dotted throughout the city. This is the place to do your shopping with Dordoi Bazaar, the largest bazaar in Central Asia, on the outskirts. 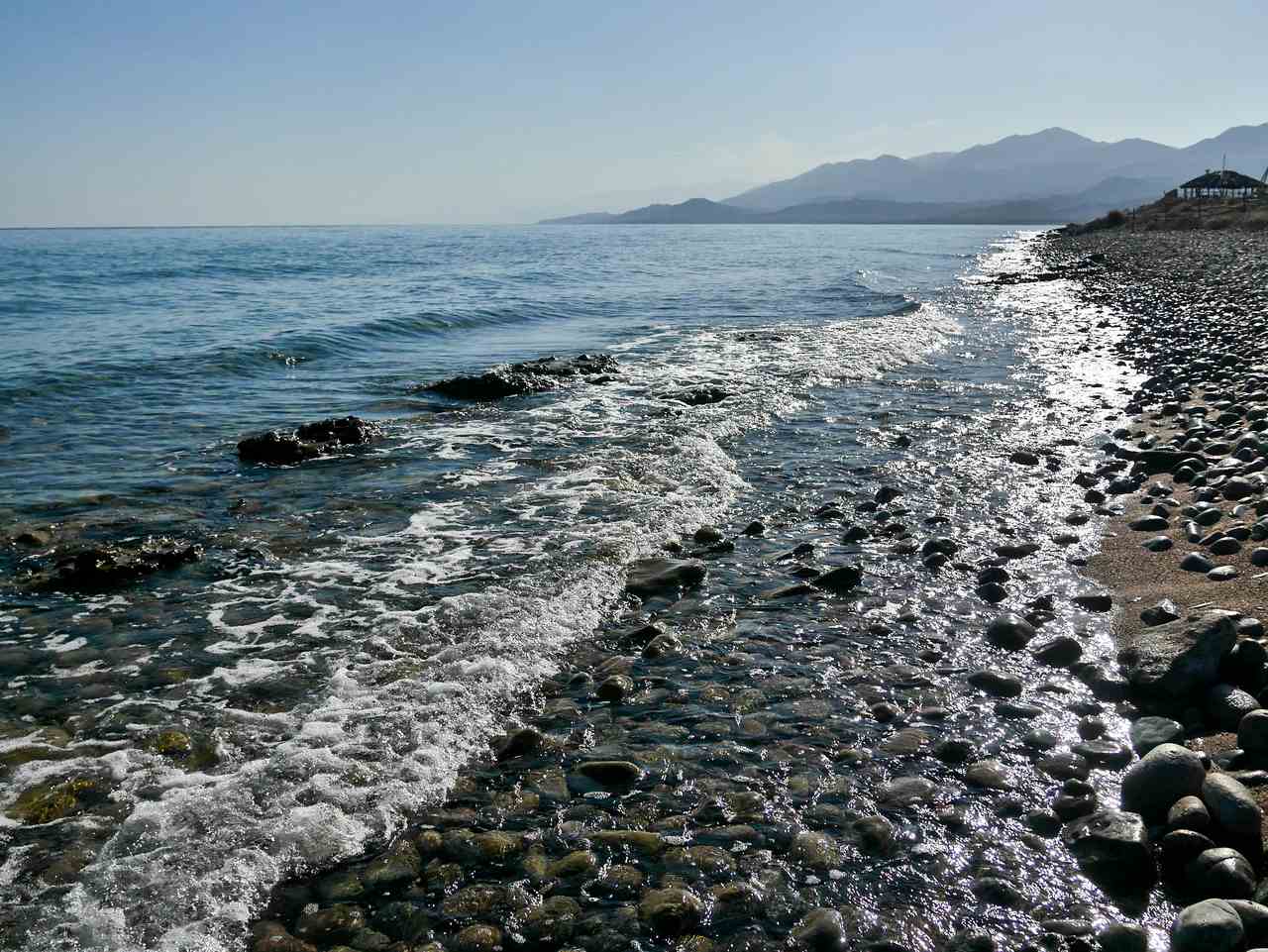 From here, I travel east to Issyk-Kul Lake, the second-highest navigable lake in the world after Lake Titicaca.

Sandwiched between two mountain ranges, the microclimate means it’s warm and winter and cool in summer. Silk Road traders stopped here to relax after crossing the mountain passes and it’s still a popular spot for tourists. 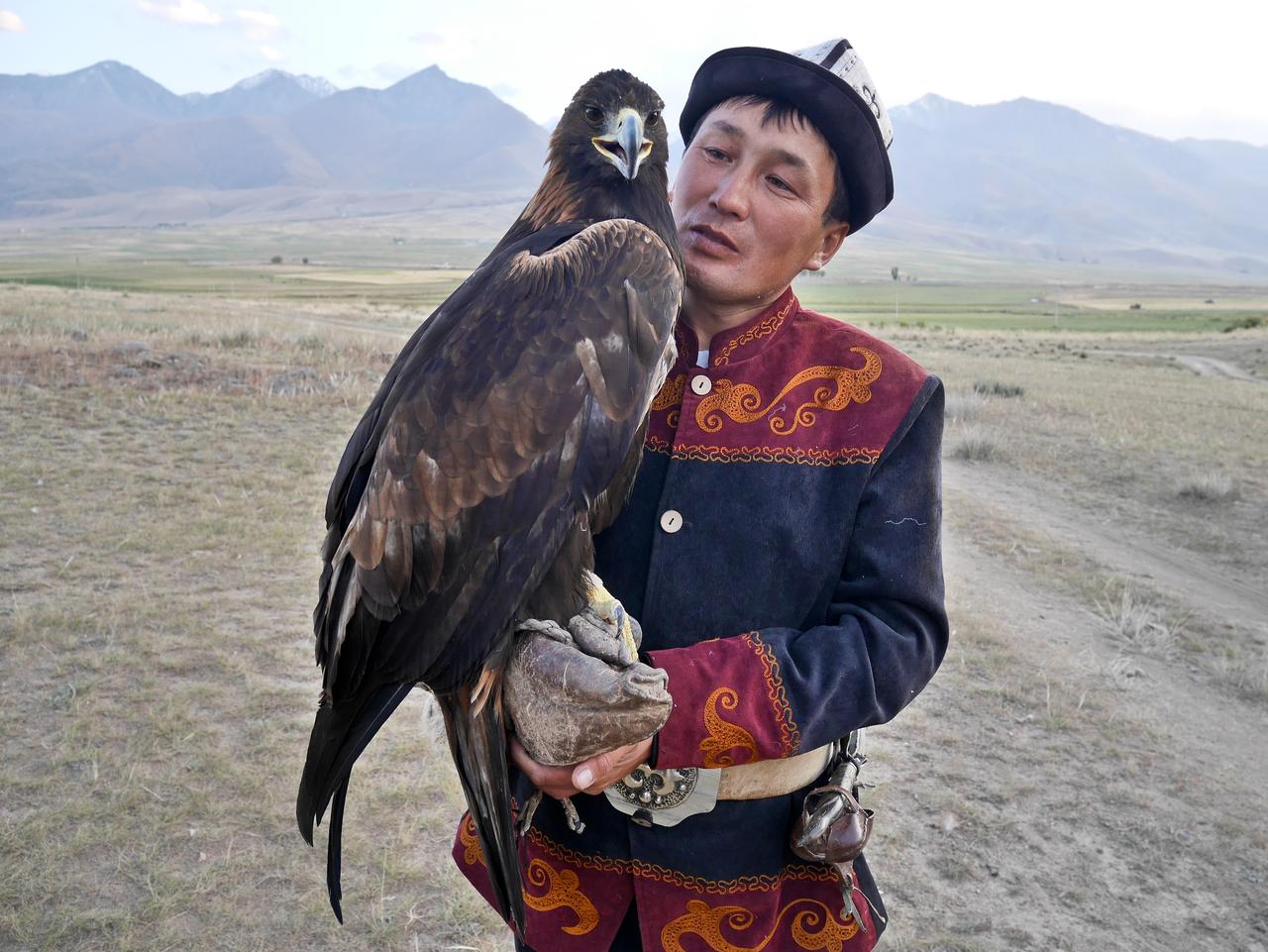 As the sun sets on the shores of the lake, I’m waiting for a demonstration of eagle hunting. Ruslan, their trainer, tells me that he‘s been involved in this sport for over 30 years and presently is the proud owner of two eagles. He took them from their nests in the wild, before they were able to fly, and patiently established a bond, training them over four years.

These are females, bigger than the males, and they make the best hunters. The tradition goes back a thousand years, the birds essential for catching food and guarding flocks. Soviet rule put an end to nomadic life and nowadays hunting with eagles is mainly for sport and entertaining tourists. Still, there’s no shortage of young apprentices to carry on the tradition.

I watch as one of them, with the eagle perched on his arm, trudges to the top of a nearby rock outcrop and waits. Ruslan drops a dead rabbit at his feet and emits a high pitched whistle. The eagle rises from the peak, swoops down, grabs the carcass and starts to rip it to pieces.

As it munches the raw flesh, her owner calms it by stroking its head. This relationship will not last forever. At 15, the eagle will be released back into the wild to find a mate and hunt for another 25 or 30 years. Ruslan will then have to find another chick and start all over again. For now, though, he’s looking forward to competing in the World Nomad Games, held next year in Turkey. 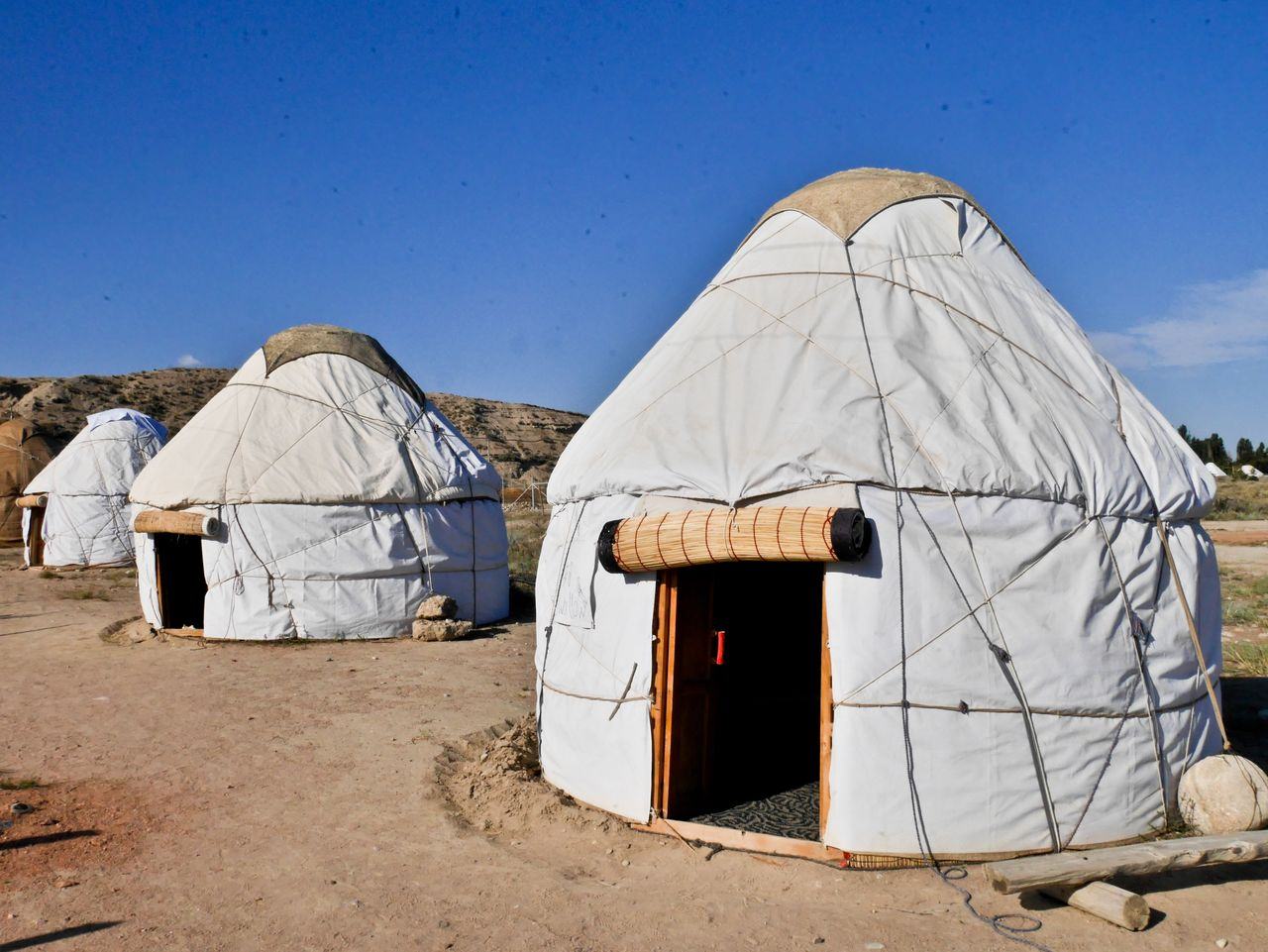 For thousands of years, the Kyrgyz people were nomads, living in Yurts which they transported on horseback. At Kyzyl-Tuu village, where they still make them, I’m given a quick lesson on how to assemble one of these, an essential skill when you’re moving home every day.

First, they form the frame with wooden struts, made from willow, then lattice sections are inserted in the gaps. Next, the structure is topped with a circular arrangement and then everything is covered in felt. It takes less than an hour if you know what you’re doing. 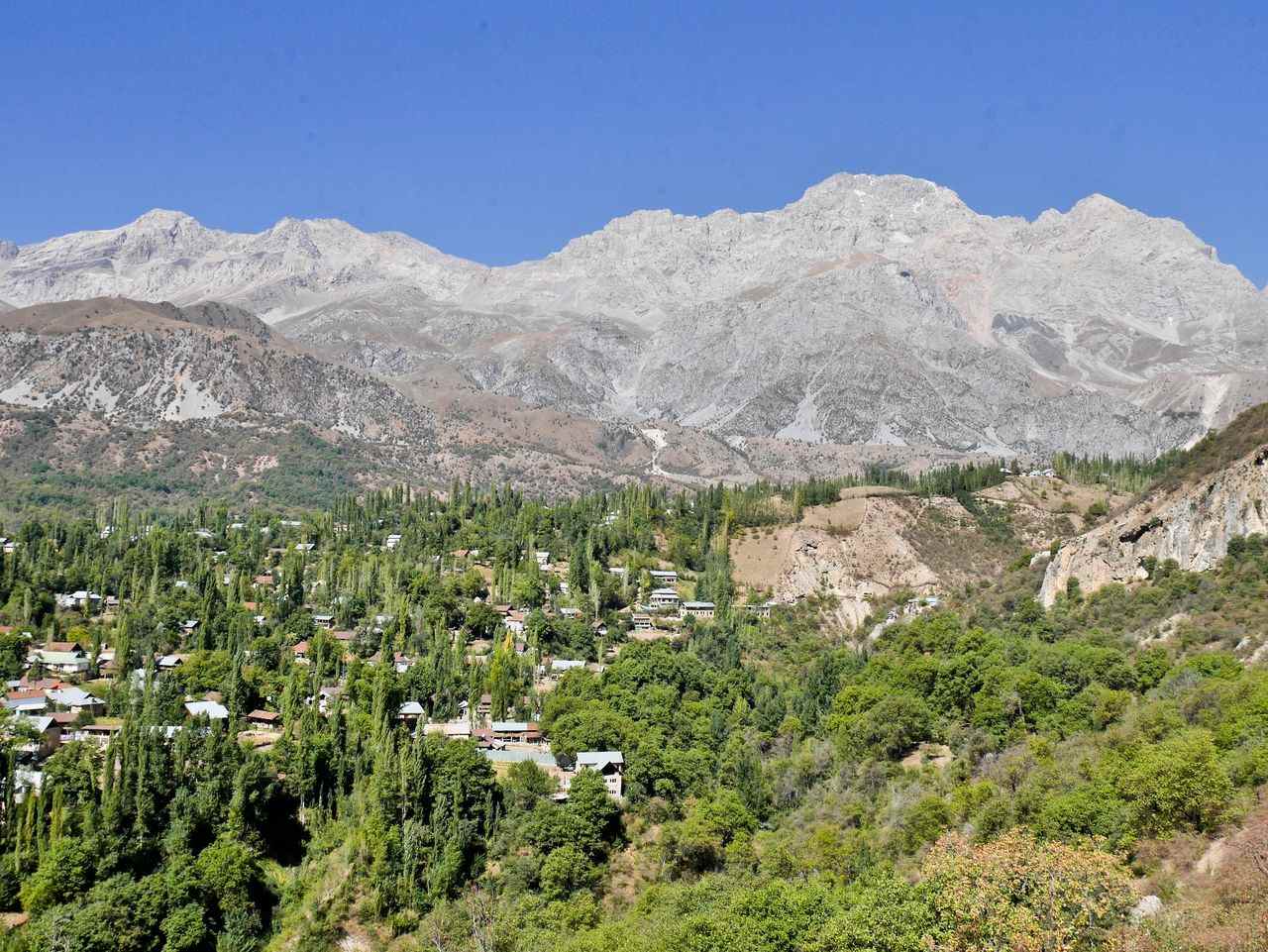 From here I set out on the road west. The landscape is stunning. Beautiful snow-capped peaks on one side, sparse white clouds piercing the deep blue sky, contrast with the azure waters of the lake.  Small shacks, roofed with corrugated iron and surrounded by neat fenced-off compounds, dot the parched terrain.

I’m soon climbing up to over 2500m into rocky treeless terrain, before dropping down to greener pastures and clusters of woods.

I’m aiming for Arslanbob, a never-ending drive on a long dirt road, seemingly in the middle of nowhere. It lies in a fertile valley, the town planted with poplar trees and the slopes containing one of the largest walnut forests in the world. It’s been here for over a thousand years and spreads over 60,000 hectares.

The walnuts here are of high quality and were one of the many goods transported along the Silk Road. Now is harvest time and families are camping out in the woods to gather the nuts. Small children rush up to me, thrust their treasure into my hands, and then shyly run away. In a good year the forest yields over 200 tons of nuts.

In the south of the country, Osh is one of the oldest cities in Kyrgyzstan and was founded over 3000 years ago. In the 8th century, it was important for silk production and a major trade centre on the Silk Road. 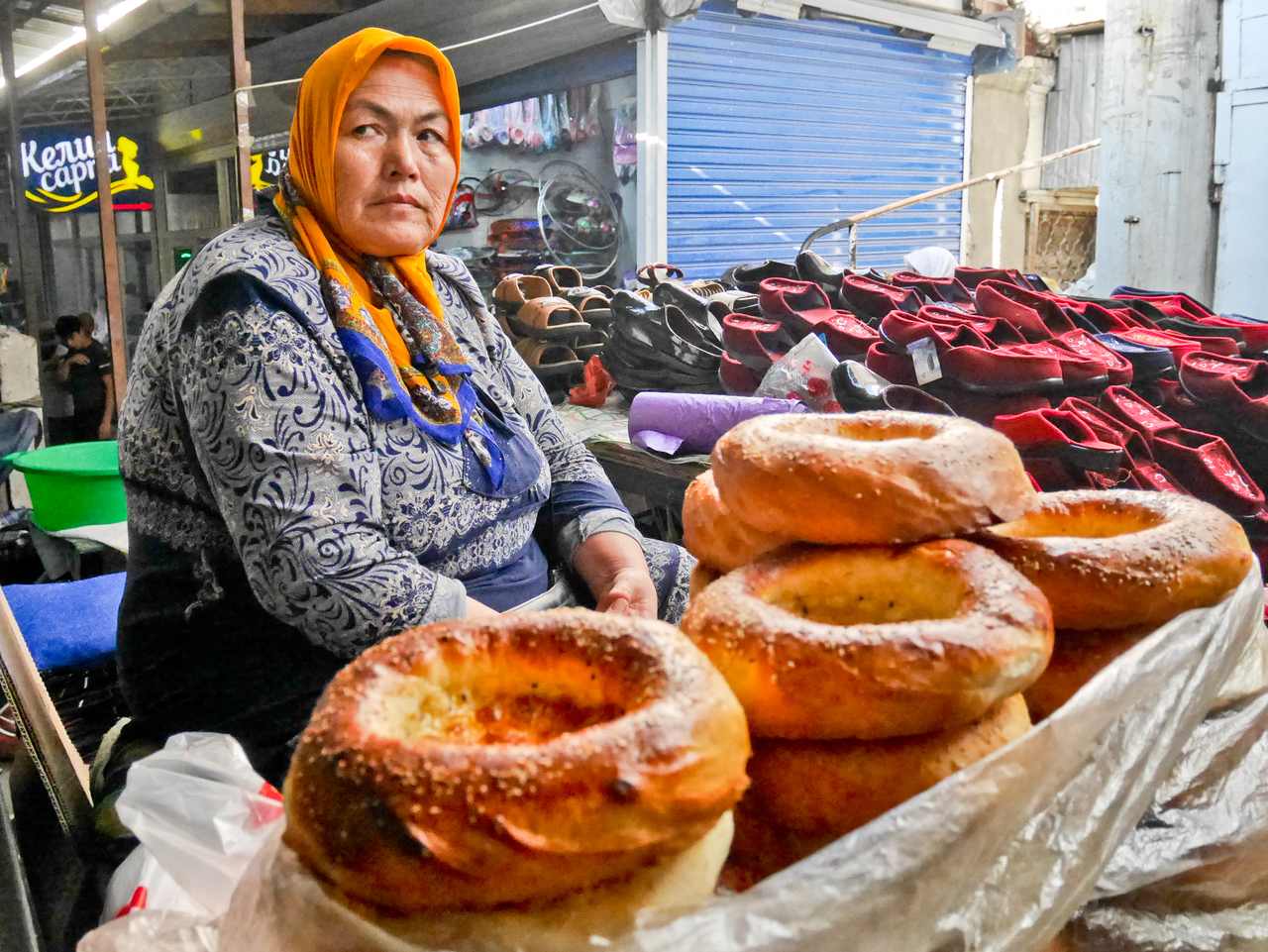 These days there are few signs of its illustrious history but a visit to the Jayma Bazaar, one of the largest in Central Asia, gives you a sense of its importance. It’s incredibly well organised, divided up into clearly defined zones, and the only hassle are the men pushing carts who shout “Bosh Bosh!” as they make their way through the crowds.

Overlooking the city is a steep rocky outcrop, where King Solomon reputedly spent the night. That’s only a legend but a descendant of Tamerlane the Great, Zahiruddin Muhammad Babur, took refuge here in 15th century, before going on to India and founding the Moghul dynasty.

The mosque he built at the top is still known as Babur’s House, although the original was destroyed by an earthquake in 1853. The views of the mountains towards Tajikistan are tremendous.

READ: The Bradt Guide to Kyrgyzstan is indispensable.

FLY: Turkish Airlines flies from London to Bishkek via Istanbul.

Note: No visa is required to visit Kyrgyzstan.

The Hyatt Regency Bishkek provides luxury in the capital.

Read our review of the Hyatt Regency Bishkek

The Classic Hotel makes a comfortable base in Osh.

All passengers travelling to Kyrgyzstan, including citizens of the Republic of Kyrgyzstan, children from the age of six and transit passengers, must present a PCR certificate with a negative result, with a test undertaken within 72 hours prior to departure. Fully vaccinated passengers exempt from this requirement.

Where can Brits go without a pre-travel covid test?