Get comfortable, relax and dive into one of these compelling books for a superb summer read. 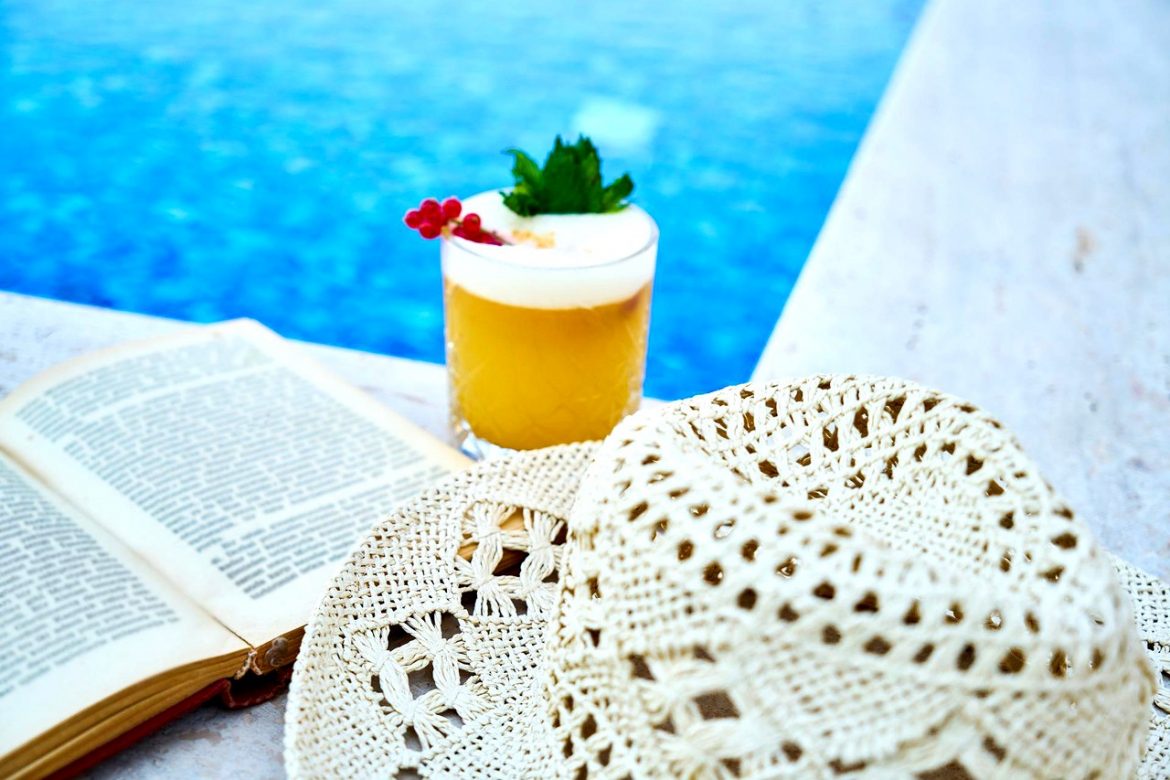 When you have some time out and all you want is to curl up with a good long read check out these books. Here are some suggestions we enjoyed reading. You won’t want to put them down:

Sun Damage by Sabine Durrant. A psychological chilling thriller set in a gorgeous villa in the South of France. Nine middle-class guests arrive at this luxury holiday home in Provence. They think they know each other well, except for a young woman, a fast-thinking grifter on the run, is hired to do the catering.

Tensions rise and fall and over the course of their break, loyalties will be tested, secrets from surprising corners are revealed, and tensions pushed to the point of no return when things get more heated than the scorching weather .temperatures

The Island by Adrian McKinty. It was supposed to be a family holiday but an accident changed everything. After moving from a small country town to Seattle, Heather Baxter marries Tom, a widowed doctor with a young son and teenage daughter. A working holiday to the Australian outback seems a perfect way to bring the new family together. When they discover a remote Dutch Island, off-limits to outside visitors, the family talks their way onto the ferry, taking a chance on an adventure far from the reach of iPhones and Instagram.

Soon as they set foot on the island, which is run by a tightly knit clan of locals, everything feels wrong. Then a shocking accident propels the Baxters from an unsettling situation into an absolute nightmare.

Heather and the kids are separated from Tom, and are forced to escape alone, seconds ahead of their pursuers. It’s up to Heather to save herself and the kids, even though they don’t trust her, the harsh bushland is filled with danger, and the locals want her dead. Heather has been underestimated her entire life, but she knows that only she can bring her family home again and become the mother the children need, even if it means doing the unthinkable to keep them all alive.
Buy it on Amazon paperback £13.51

When I grow up. In this book, Moya Sarner, a widely published writer on issues that affect our emotional wellbeing, asks the questions we all wonder about: When do we become adults? What does it mean to grow up? And what are the experiences that propel us forward ― or keep us stuck? These are the questions that many contemplate and that journalist Moya Sarner sets out to answer as she begins training as a psychotherapist. But as she delves further into her own mind and others’, she soon realises that growing up is far from the linear process we imagine it to be. So begins a journey of discovery into what growing up really involves, and how we do it again and again throughout our lives.

From early adulthood through to old age, When I Grow Up examines each life stage, interrogating the traditional markers of adulthood and finding new ones. Through conversations with grown-ups from all walks of life, and through her own experiences and training, Sarner probes deep into our psyches to discover how we grow and develop, and what we need to thrive throughout our lives.
Buy it on Amazon, hardback £16.99

Life Time: The New Science of the Body Clock, and How It Can Revolutionize Your Sleep and Health. Professor Russell Foster, a world-leading expert on circadian neuroscience, asserts that everything we need to do for good health is influenced by our circadian rhythms and sleep.

That includes our physical well-being, our mental health, a better functioning immune system, fighting diseases, enhancing fertility, and tackling obesity by getting aligned with the natural time to eat to supercharge your metabolism. The circadian rhythm also affects, relationships, energy, emotions and mood as well as work life, family life and happiness. This book tells you what to do to keep within your natural rhythm and how to do it. It’s not a boring manual, there’s plenty of humour enmeshed in science.  Treat it as the vital information to acquire and implement to help you create a better life.
Buy it on Amazon, hardback £12.99

The Fairy Tellers by Nicholas Jubber. Riding with Reindeers: A Mesmerizing Journey through Scandinavia on the Trail of The Snow Queen: Fairy-Tales are not just fairy-tales: they are records of historical phenomena, telling us something about how Western civilisation was formed. In The Fairy Tellers, award-winning travel-writer Nick Jubber explores their secret history of fairy-tales: the people who told them, the landscapes that forged them, and the cultures that formed them.

While there are certain names inextricably entwined with the concept of a fairy-tale, such as the Brothers Grimm and Hans Christian Andersen, the most significant tellers are long buried under the more celebrated figures who have taken the credit for their stories –  people like the Syrian storyteller Youhenna Diab and the Wild Sisters of Cassel. Without them we would never have heard of Aladdin, his Magic Lamp or the adventures of Hansel and Gretel.

Tracking these stories to their sources carries us through the steaming cities of Southern Italy and across the Mediterranean to the dust-clogged alleys of the Maghreb, under the fretting leaves of the Black Forest, deep into the tundra of Siberia and across the snowy hills of Lapland. From North Africa and Siberia, this book illuminates the complicated relationship between Western civilisation and the ‘Eastern’ cultures it borrowed from, and the strange lives of our long lost fairy-tellers.
Buy it on Amazon, hardback £12.85

Beach House Summer by Sarah Morgan. Joanna Whitman’s high-profile marriage held more secrets than she cares to remember, so when her ex-husband dies, she doesn’t know what to feel. But when she discovers that he’s left behind a pregnant young woman, Joanna is forced to act. She knows exactly how brutal the spotlight on them both will be…unless she can find a way for them to disappear. Ashley Blake is amazed when Joanna suggests they lie low at her beach house in her sleepy Californian hometown. Joanna should be hating her, not helping her. But alone and pregnant, Ashley needs all the support she can find.. Joanna’s only goal for the summer is privacy. All Ashley wants is space to plan for her and her baby’s future. But when an old flame reappears, and secrets spill out under the hot summer sun, this unlikely friendship is put to the test.
Buy it on Amazon paperback £6.29

The Hotel Nantucket Paperback by Elin Hilderbrand. Reeling from a bad break-up, Lizbet Keaton is desperately seeking a fresh start. When she’s named the new general manager of the Hotel Nantucket, a Gilded Age gem whose glamour has been left to tarnish, she hopes that her local expertise and charismatic staff can transform the hotel’s fortunes – and her own.

All she needs to do is win over their new billionaire owner from London, Xavier Darling – and the wildly popular Instagram influencer, Shelly Carpenter, who can help put them back on the map. But behind the glossy façade, complete with wellness centre and celebrity chef-run restaurant, a perfect storm is brewing.

Hotel Nantucket can’t seem to shake off the scandal of 1922, when a tragic fire killed nineteen-year-old chambermaid Grace Hadley – and the guests have complicated pasts of their own. With Grace gleefully haunting the halls, secrets among the staff, and Lizbet’s own romantic uncertainty, there’s going to be trouble in paradise. Buy it on Amazon paperback, £11.99

The Pink Hotel by Liska Jacobs. Newlyweds Keith and Kit Collins can hardly believe their luck when the general manager of the iconic, opulent Pink Hotel invites them to come for a luxurious stay in a bid to hire Keith. Kit loves their small-town life, but Keith has always wanted more, and the glittering, lily-scented lobby makes him feel right at home.

Soon after their arrival, wildfires sweep through the surrounding mountains and Los Angeles becomes a pressure cooker, with riots breaking out across the city amid rolling blackouts. The Pink Hotel closes its doors to “outsiders,” and Keith and Kit find themselves confined with an anxious, disgruntled staff and a growing roster of eccentric, ultra-wealthy, dangerously idle guests who flock to the hotel for sanctuary, company, and entertainment.

The Pink Hotel exposes a tenuous class system within its walls, full of insurmountable expectations and unspoken resentments, which deteriorate as the city burns. In her barbed, provocative new novel, Liska Jacobs explores the corrosive nature of greed and interrogates the notion of true love, while hurtling readers toward a certain disaster.

Tunnel of Mirrors by Ferne Arfin. 1907 – Rachel Isaacson, bright, rebellious and haunted by visions, is born into a rigidly Old World family in New York’s Lower East Side. Hungry for independence, she enters a doomed marriage of convenience with violent consequence.

Across the Atlantic, storyteller, fiddler and cliff climber Ciaran McMurrough is raised in pastoral innocence on Rathlin, of the coast of Ulster.

Their stories are told in parallel until circumstances turn them both into outcasts among their own people and bring them together on the docks of Lower Manhattan in 1928. The wistful, bittersweet love at the heart of this lyrical novel is set against the turbulent early 20th century in Ireland and America. Cinematic, suspenseful and lightly touched with magic, it is the perfect summer read.

“Beautifully told, this novel transports you through time and into the character’s lives with prose so vivid, we feel we are part of their world,” said one reviewer. “The dialogue is pitch-perfect. The story is compelling. It’s a fat novel, but never dreary, never dull. We all need great fiction – Tunnel of Mirrors doesn’t disappoint.”