Cruise review: Along the Rhône and Saône on MS Lord Byron

Cruises along France’s southern rivers are increasingly popular, not least because of the near-guaranteed sun. 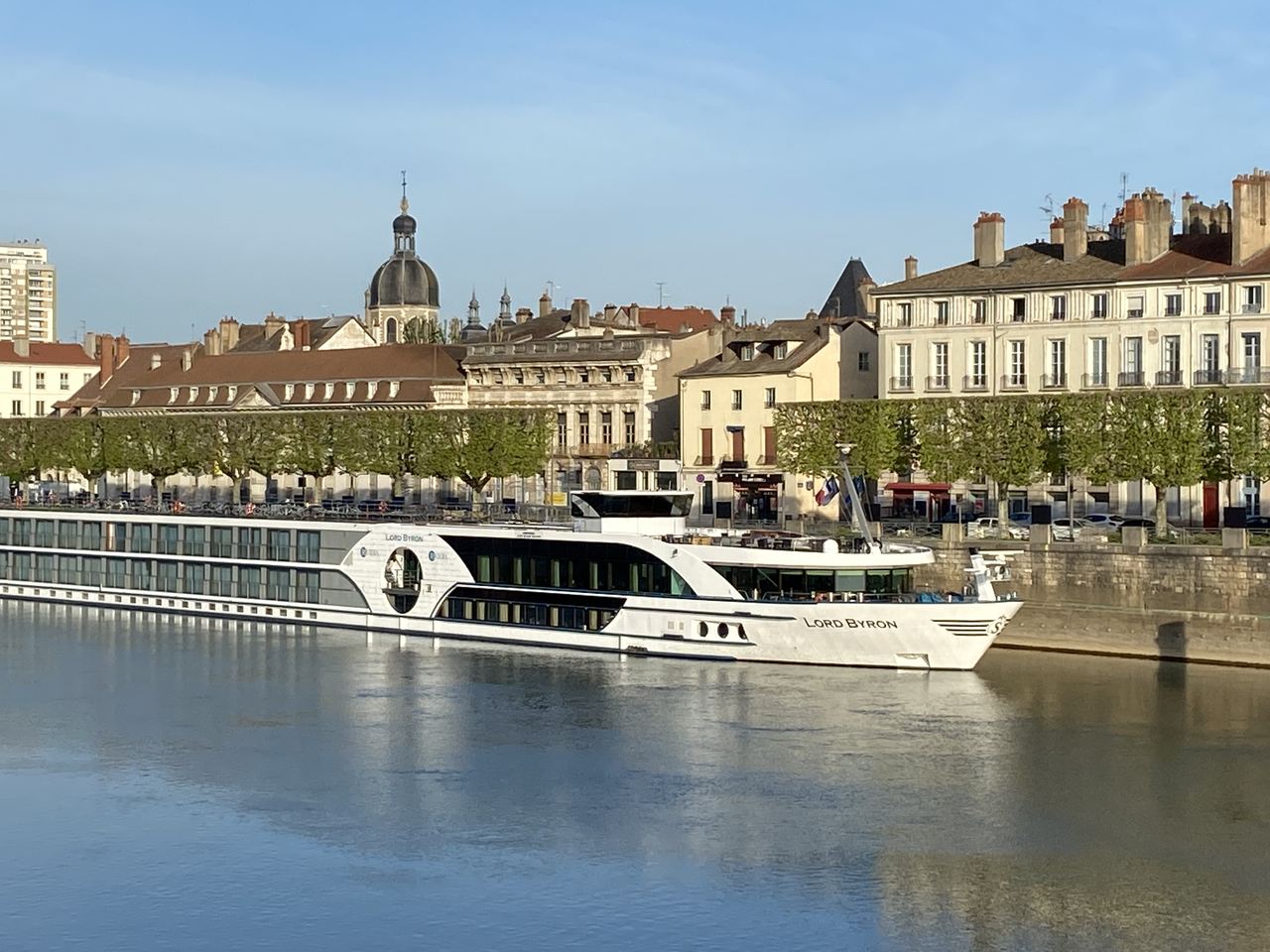 Cruises along the Rhine and Danube might still be the favourite but trips along France’s southern rivers are increasingly popular, not least because of the near-guaranteed sun. We boarded MS Lord Byron for a cruise through Burgundy, River Rhône & Provence.

The Burgundy, River Rhône & Provence Cruise from growing British company Riviera Travel started in Lyon, delightfully sun-drenched even in mid-April. The Rhône, which has made its way from Lake Geneva, is joined by the Saône after both flow through the city centre.

The voyage heads north to the Burgundy wine region before sailing south past countless vineyards and through cities such as Vienna and Arles and ending in Avignon, all rich in Roman history – and all involving free walking tours and other excursions.

MS Lord Byron, launched in 2013, carries 140 passengers. Its sleek appearance is tempered inside with polished wood, marble floors, brass and rich blue carpets decorated with fleur de lys. The mid-ship entrance opens on to a lounge and bar, adorned with blue and gold upholstery, that runs to the front. The restaurant occupies a similar space downstairs.

Cabins are on three levels, two with glass walls, half of which slides back to turn the room into an airy space; the lower level simply has head-height windows. 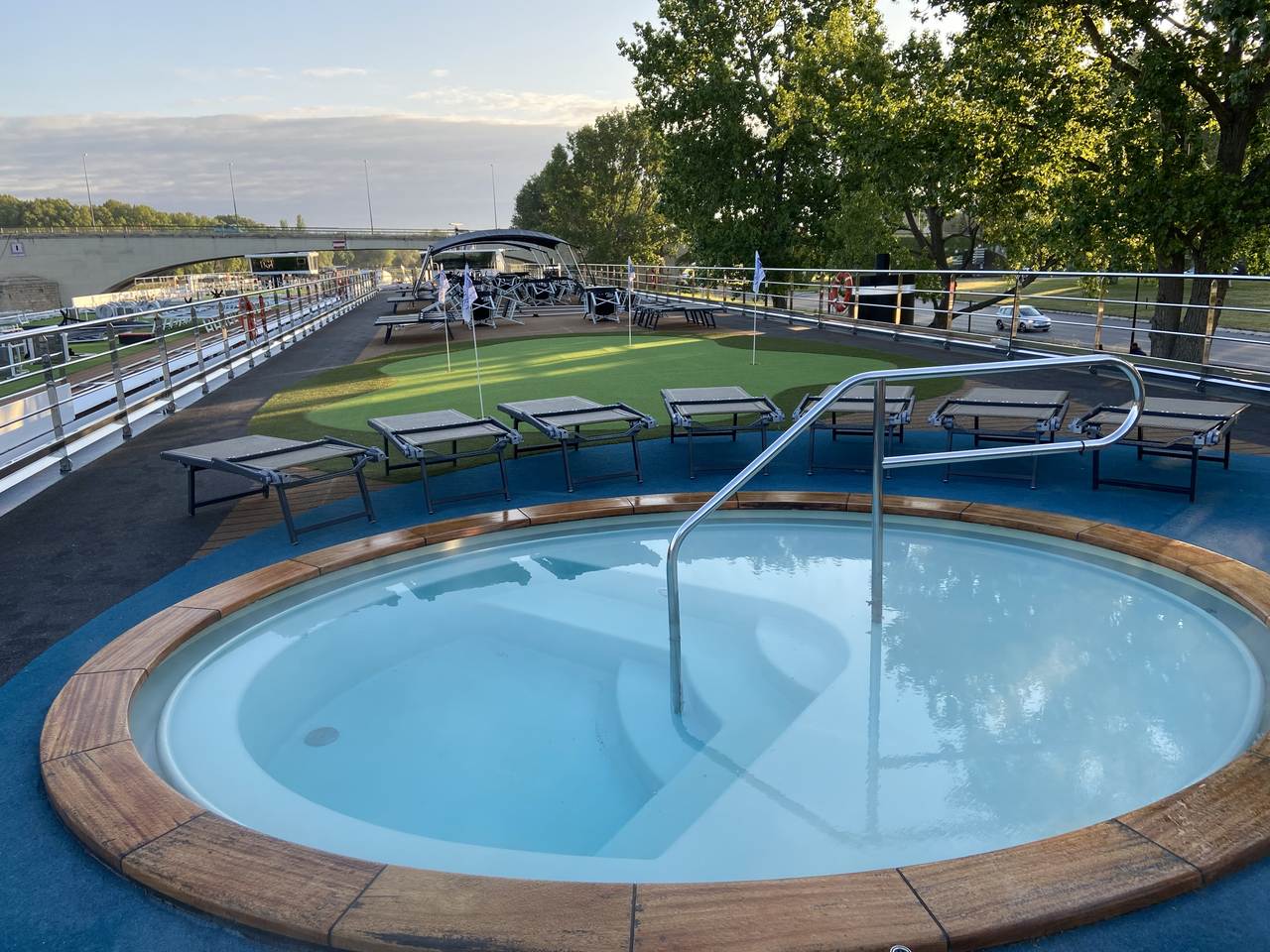 The sun deck, running the length of the ship, has a large hot tub and putting green. Below there’s a sauna, steam room and hair salon. 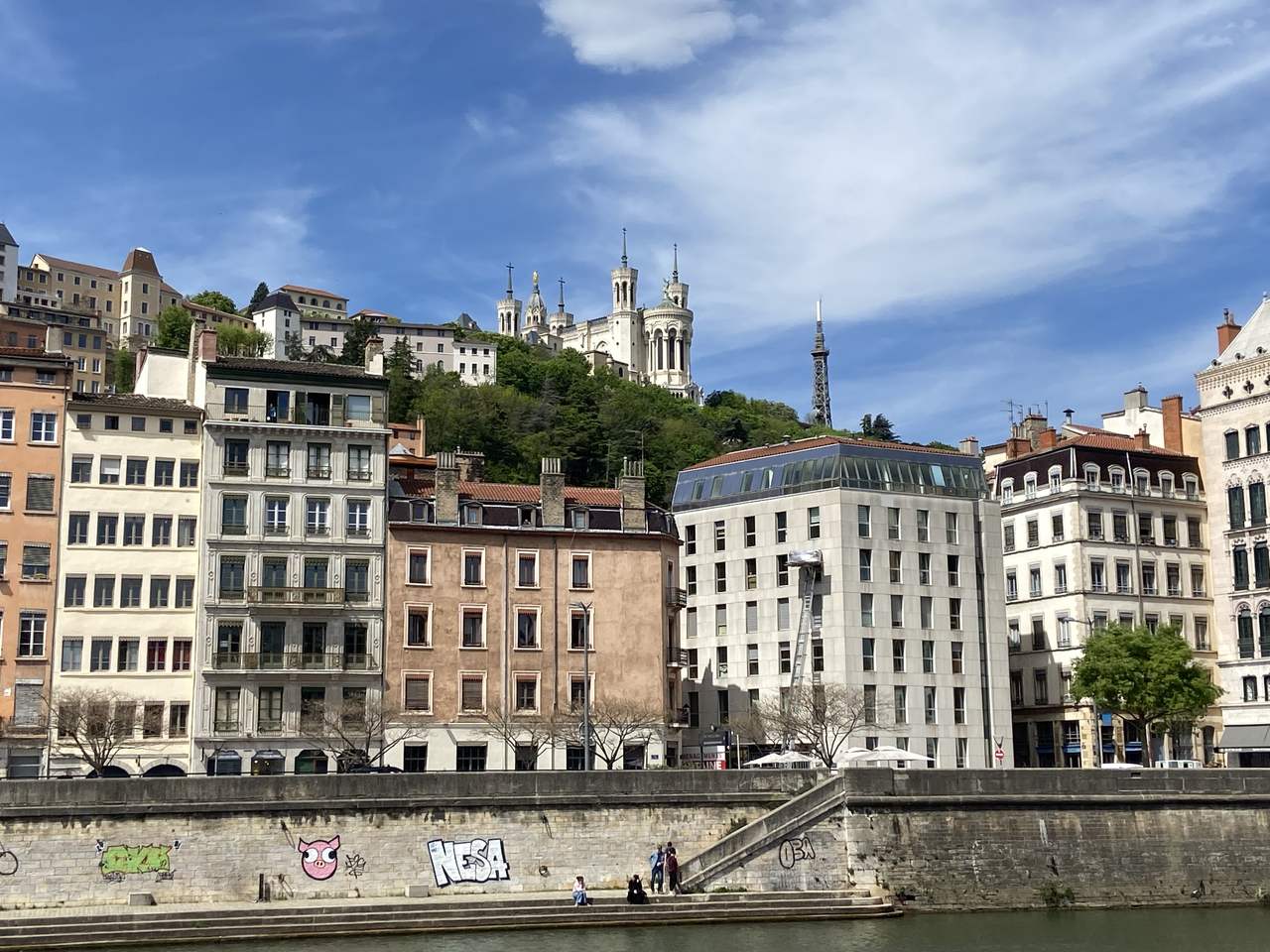 We join the ship on the city centre riverbank, a place with the air of the Seine in Paris, alive with joggers, cyclists, even yoga fanatics, and a backdrop of elegant buildings. It’s lunchtime and we go for a walk, crossing the Rhône, passing through the streets on the promontory between the twin rivers then cross the Saône and disappear into the bustling old town. Heading back we follow the river to where it meets the Rhône at Confluence Park, a mix of shops, apartments and restaurants.

The next day a bus tour takes us up to the ridge above the old town where we visit the grandiose 19th-century Basilica of Notre-Dame de Fourvière dominating the skyline from just about wherever you are.

Back on board, we take our lunch – mine a gorgeous artichoke and tuna salad – onto the rear terrace and soak up the sun as we round Confluence Park and cruise up the Saône through the city, creeping under low bridges, one with only 4in to spare, even with the wheelhouse lowered, then country.

We rise early, grab a croissant and stroll through the just-opening market, the extravagant gardens of Parc George Nouelle and the historic river island of this little town. Then off to Beaune, a town at the heart of wine country where, after walking the cobbled streets, we have a wine tasting.

It’s only 9.30 but we’re under the medieval stone arches beneath a wine shop sipping red, white and the most wonderfully rich cassis, that blackcurrant liqueur, I’ve ever tasted. Then a walking tour and we find La Moutarderie, the Edmond Fallot mustard factory (we’re 30 miles from Dijon); no time for the tour but enough for a free tasting and to stock up – the cassis mustard is divine – before driving back through iconic vineyards.

A neat little town amongst hills. Our tour on the City Tram, a mini road train, snakes up tiny roads lined by Roman walls to the Belvedere de Pipet viewpoint and quietly imposing 19th-century Notre Dame de Pipet church. We gaze down at the Roman theatre, where crowds of 13,000 were entertained two millennia ago – and where now 8,000 sit on stone seats for the two-week Jazz à Vienne festival each July. Crawling down, brakes squealing, we arrive at the town square for a walking tour. There’s the Saint-Maurice cathedral, its front wild with sculpture and its dizzying ceiling arches simple and unadorned, the massive columns of the Auguste and Livia Temple, like something from the Acropolis, the Jardin de Cybele, part of the former Forum, and the Pyramid, a stone obelisk around which chariots used to race. We nip across the river footbridge for the huge, contemporary Gallo-Roman Museum behind which is a seven-acre site of uncovered roads, foundations and fountains.

After an afternoon cruise from Vienne, passing storks in treetop nests and, on locks just north of little Andance, seagulls with chicks, we arrive In the heart of another part of wine country. A tiny town with hillside castle ruins Tournon is across the river from the wine town of Tain-l’Hermitage with a near mountain of vineyards rising up behind.

We borrow the ship’s bikes for a sunset cycle along a teensy bit of the 500-mile ViaRhôna path that runs from Lake Geneva to the Med, and cross the bridge built in 1849 by inventor Marc Seguin, the world’s first suspension bridge with wire cables (and with a wooden roadway). 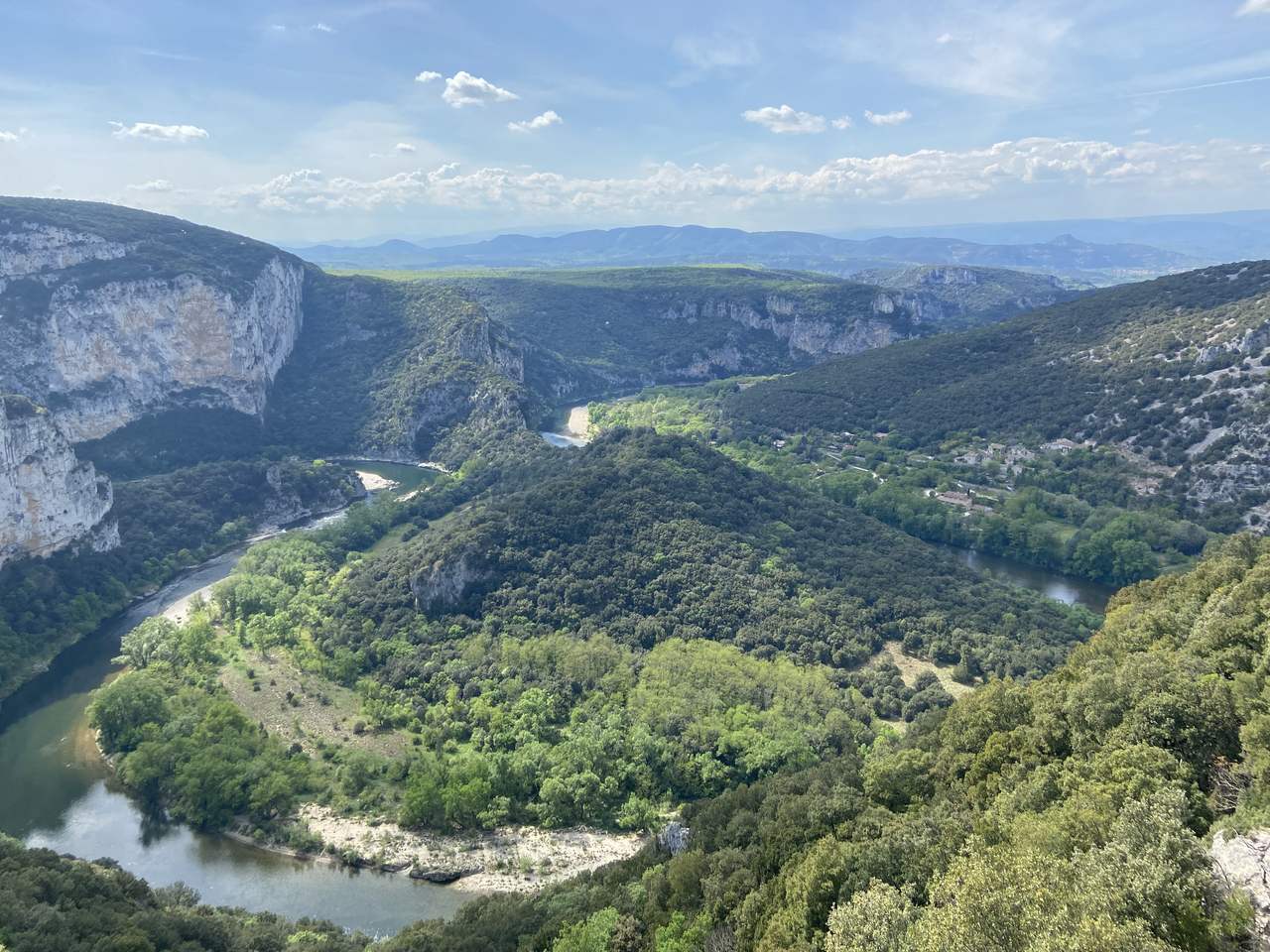 After waking in Tournon, we slide southward past hills and chalky bluffs, arriving in tiny Le Pouzin at lunchtime (although we’d managed an early lunch by then). Off swiftly on a five-hour excursion to the gorge, albeit via a lavender farm (and lavender gift shop).

The gorge is another world entirely, a deep river bed winding, Grand Canyon-like, through the wilderness. We negotiate the twisting roads down to river level, passing the Pont d’Arc, a 180ft rock arch; with coach parking, we enjoy the slow, scenic drive back up, pulling over for photos at the top. Farther along we call at the Belvedere viewpoint, a hidden spot with a neat coffee shop looking over the gorge and a lofty Cathedral Rock. 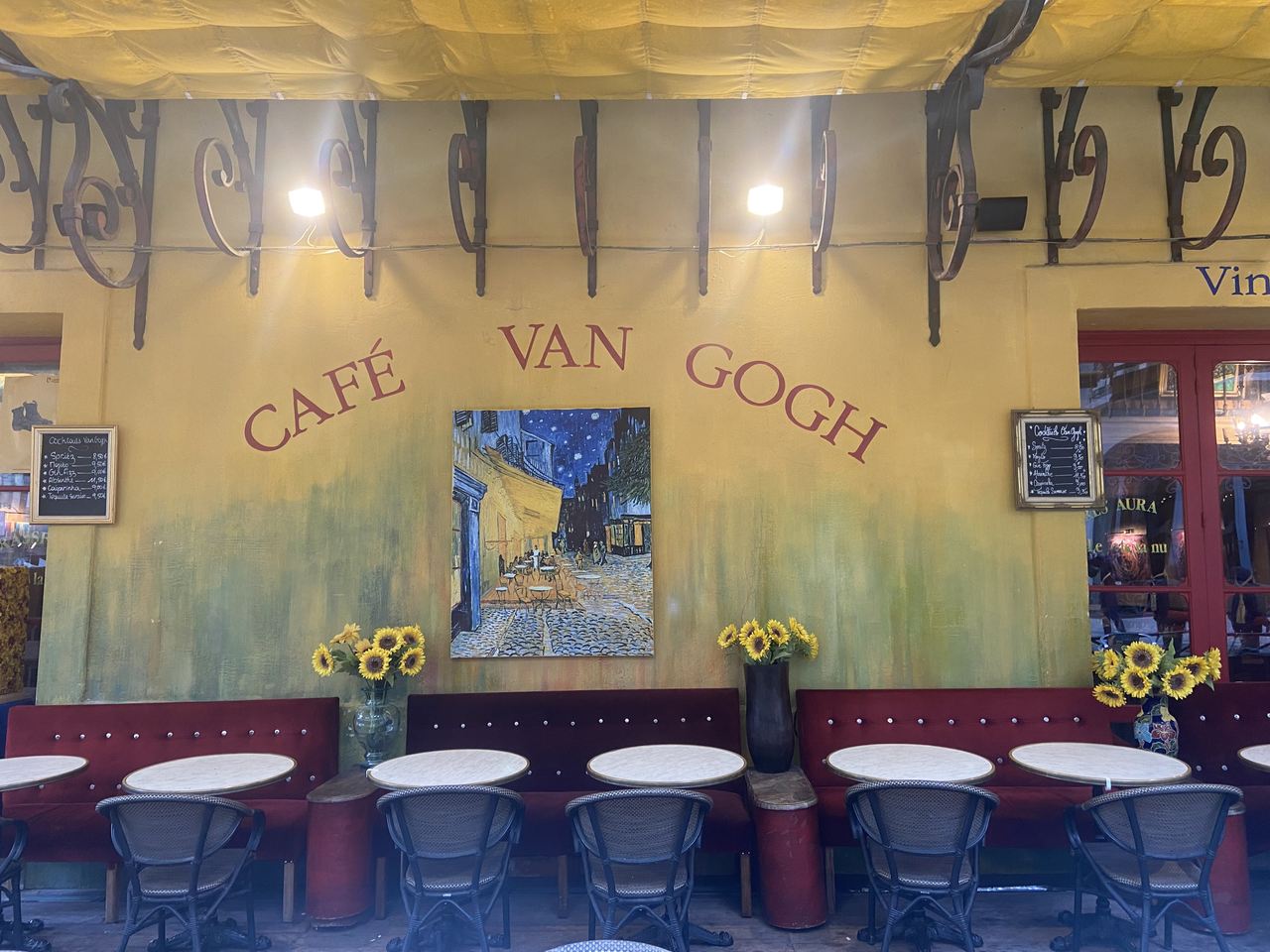 Our southernmost call, a Roman city through and through and with a whole day of organised exploring. In the morning, a walking tour through the narrow streets, taking in the looming stone amphitheatre and the dark, medieval Church of St. Trophime.

This was also where Vincent Van Gogh painted many pictures, including the iconic Sunflowers, so we pass the sunflower-hued Van Gogh Café (immortalised in the painting  Café Terrace at Night) and visit Espace Van Gogh, the brightly planted courtyard of the former hospital where he was committed after cutting off his ear. Next, coach to the Pont du Gard, the three-tiered Roman aqueduct that’s one of France’s biggest historic attractions. The warm Provencal weather gave up and we walked across the mighty structure leaping the River Gardon and its gorge in pelting rain…

Docked just along from the remains of the famed Pont d’Avignon, the bridge is the first stop on our final tour. The surviving medieval arches are a must-see and we get to walk out into the river. But, impressive as that is, the city itself with its 2.7-mile Roman wall is even more so.

The Palais des Papes, where a string of popes enjoyed the good life, is a monumental stone place, more castle than a palace, where you think you’ve seen the biggest hall and yet you then find yourself in a bigger one, then a bigger one. And the Notre-Dame des Doms Cathedral with its 14th-century Gothic mausoleum of Pope John XXII, as well as the calming Jardin des Doms on a ridge overlooking the river and bridge – a perfect finale to a week of wine, Romans and magnificent scenery.

Camper Sharing – a great way to get on the road with a campervan, motorhome or caravan