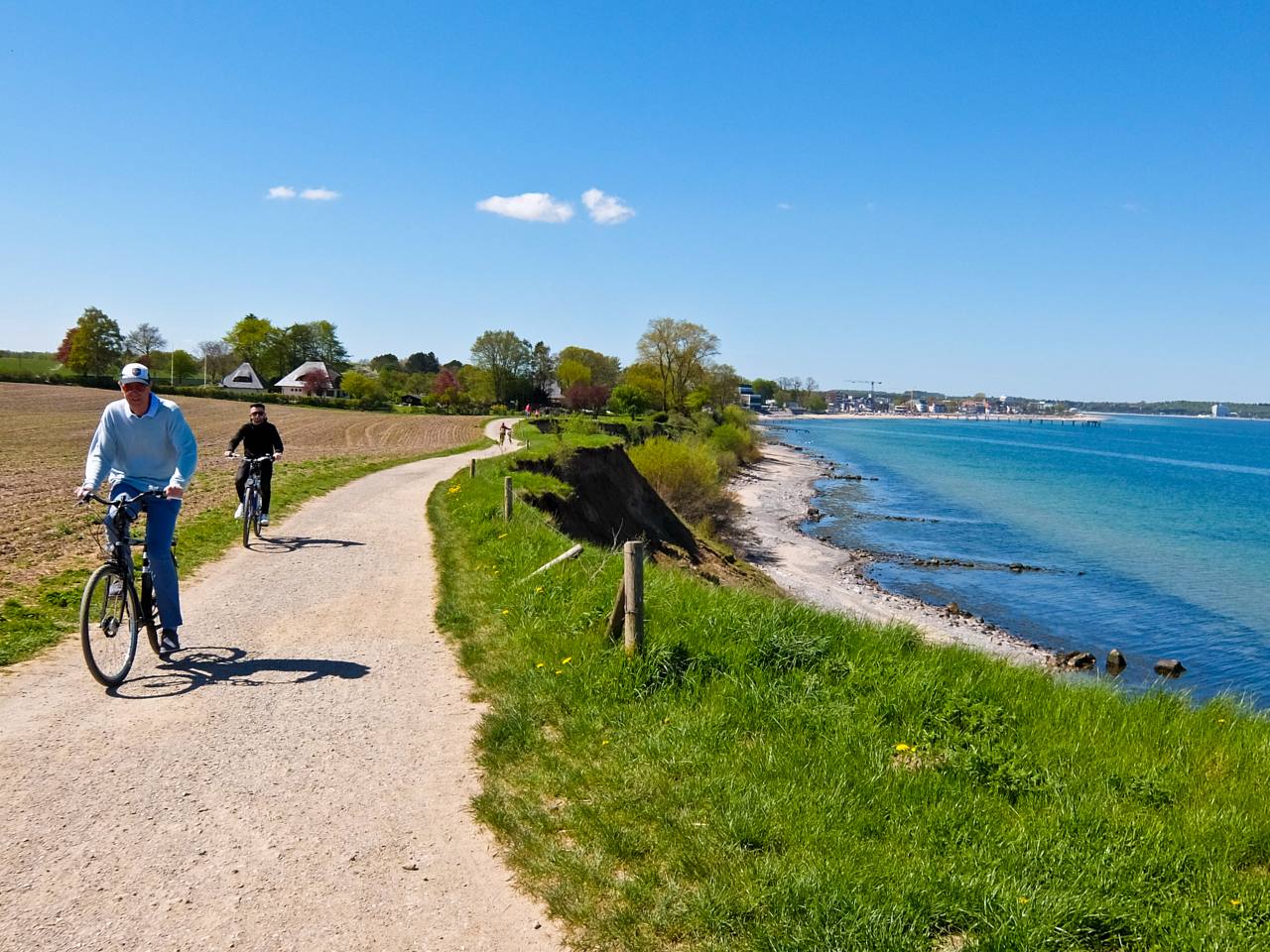 In medieval times, this part of Europe saw the rise of powerful cities, ruling the
waves in the Baltic and North Seas. Those days are long gone, but the fairytale
houses, narrow streets, cavernous churches and ornate town halls still
remain, lost in time. And since it’s so flat, it’s easy to explore by bicycle.

The Hanseatic League was a loose coupling of cities in North Western and Central Europe that came together in the late middle ages. Hanse was the Middle Low German word for a convoy and the League provided protection for merchant trade in the Baltic and the North Seas, as well as on land. Over three centuries the cities became rich but the rise of countries and states finally put an end to this arrangement. The death knell sounded when their merchants were imprisoned and expelled from London in 1597. 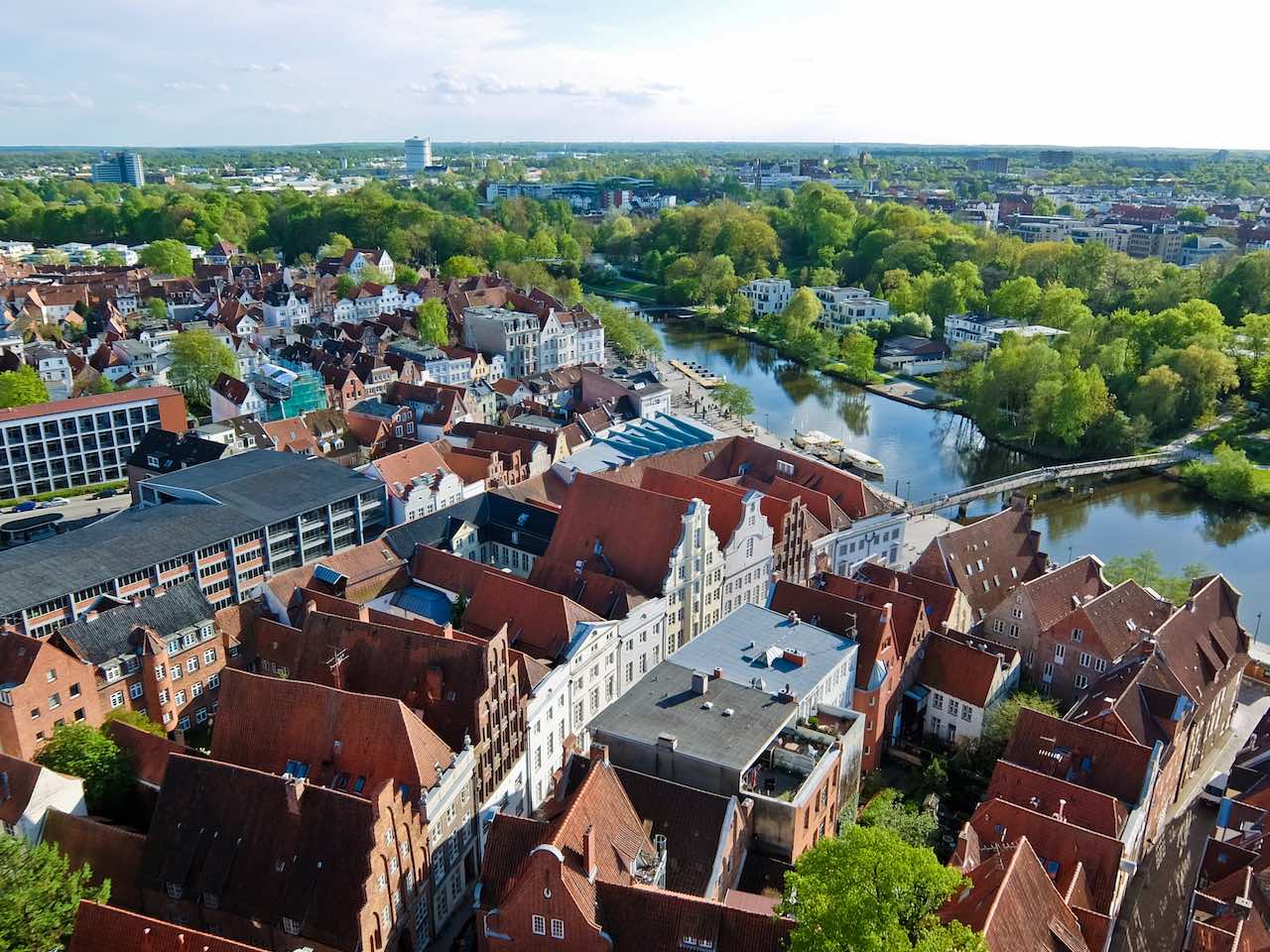 The rebuilding of Lübeck in 1159 is generally acknowledged as the start of the Hanseatic League and the port became the centre of trade in the North and Baltic seas. These days there are still ships in the harbour and, although city suffered much damage during the war, the buildings have been painstakingly restored and it retains much of its medieval charm. 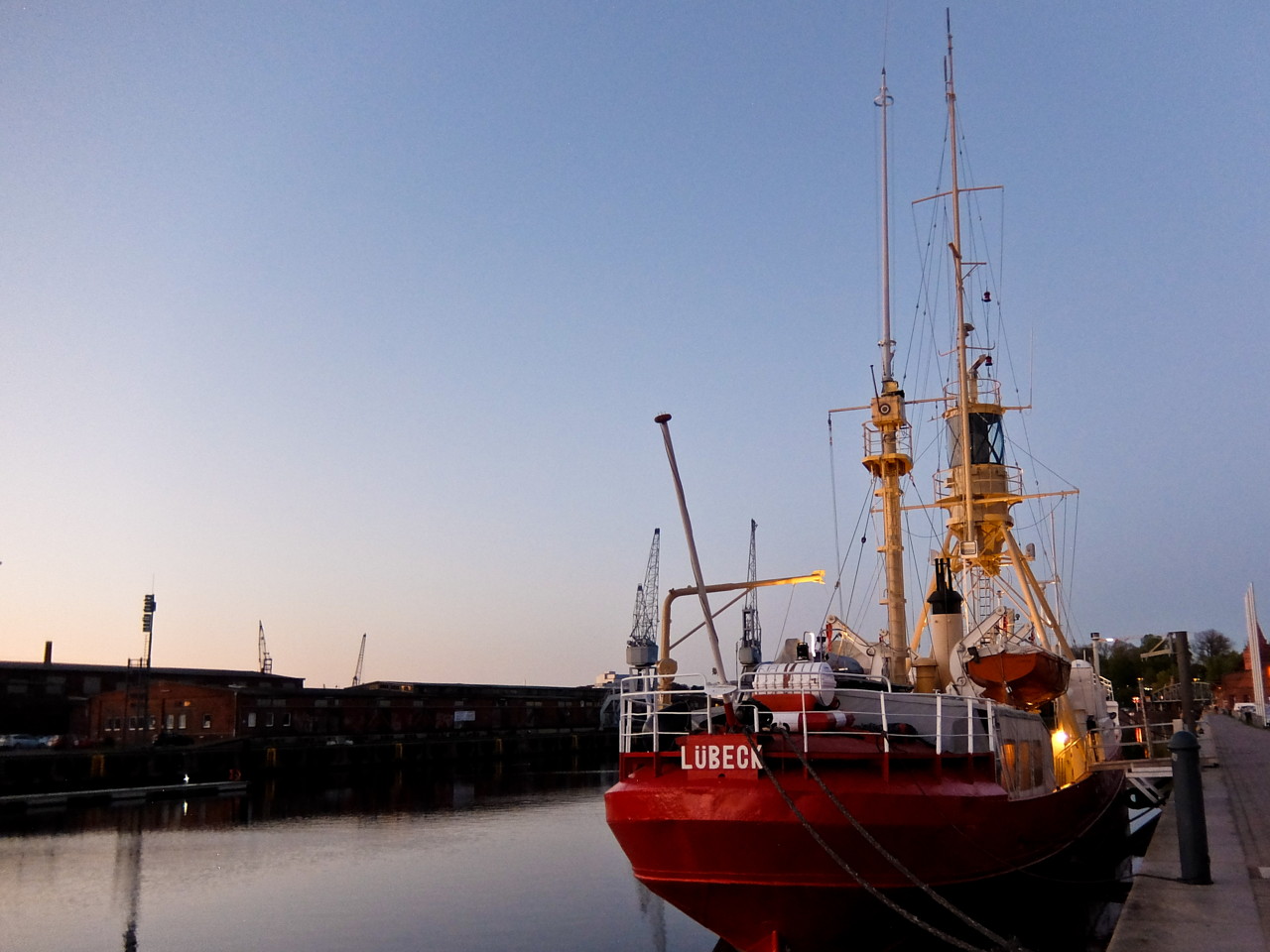 The new European Hansemuseum uses state of the art technology to take you through the history of Hanseatic League. It’s clever – once you’ve registered, don your headset and you’ll be guided in your own language. There’s a whole section dedicated to London and the prominent role it played in Hanseatic trading – wool was exported from the north of England and goods from the continent arrived in return.

Climb to the top of St Peter’s church to get a fantastic view over the tiled roofs stretching as far as the Baltic Sea on a clear day. It’s worth wandering the narrow lanes where workers were allowed to build doll’s house cottages in the grounds of much larger houses. The 13th century town hall is one of the oldest in Germany and the two remaining city gates, the Holstentor and the Burgtor, have been imaginatively restored, although the walls were demolished in the 19th century. 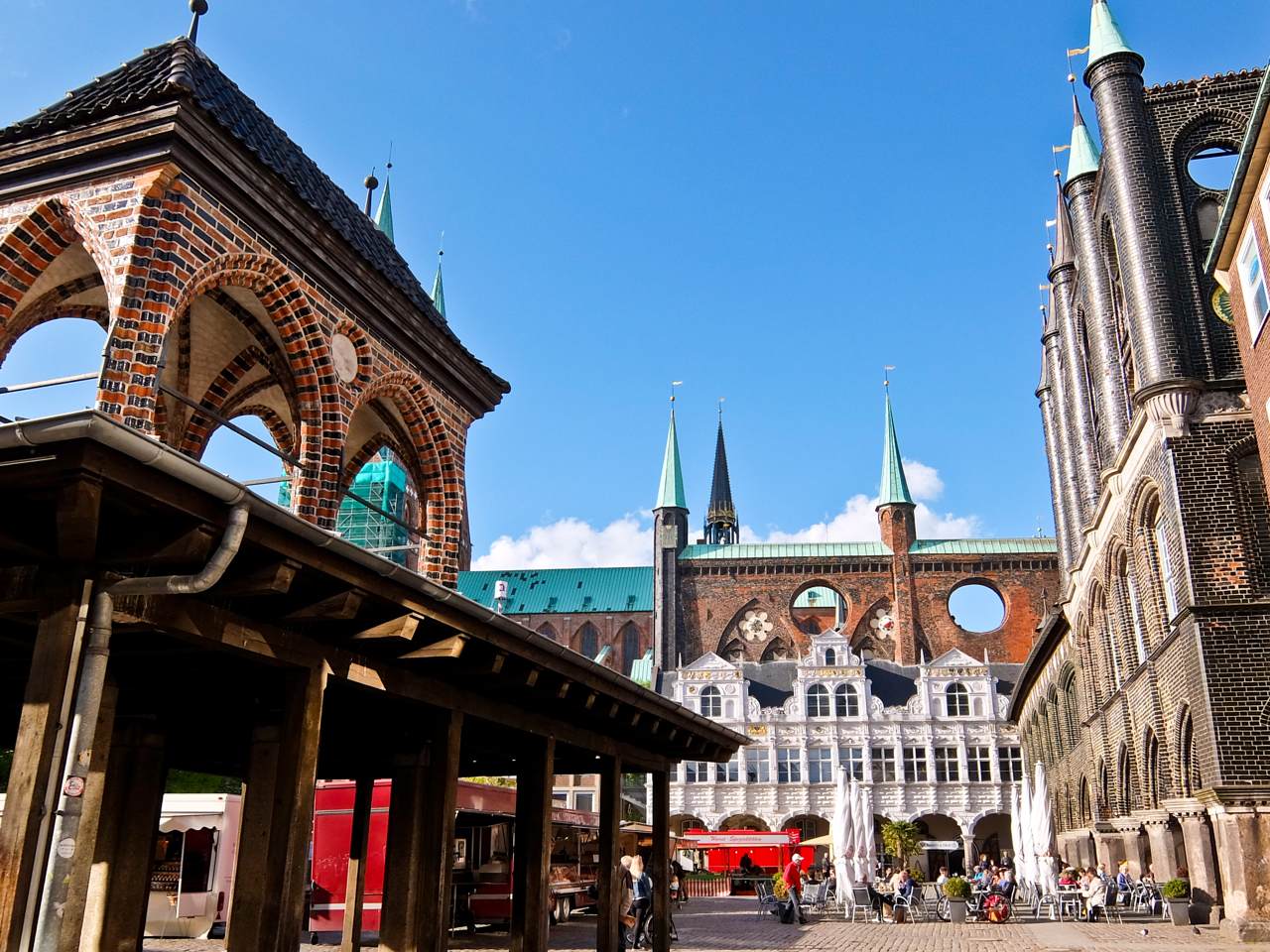 The city is close to the Baltic so I set out for the coast on a designated cycling trail. To cross the River Trave, I put my bike on a free shuttle bus, to get through the Herren Tunnel. After that it’s a glorious ride cross country to the port of Travemunde which has ferry connections to Sweden, Finland, Russia, Latvia and Estonia. I follow the trail north on the cliffs, with tantalising glimpses of deserted beaches and narrow coves, before arriving at the attractive resort of Niendorf. 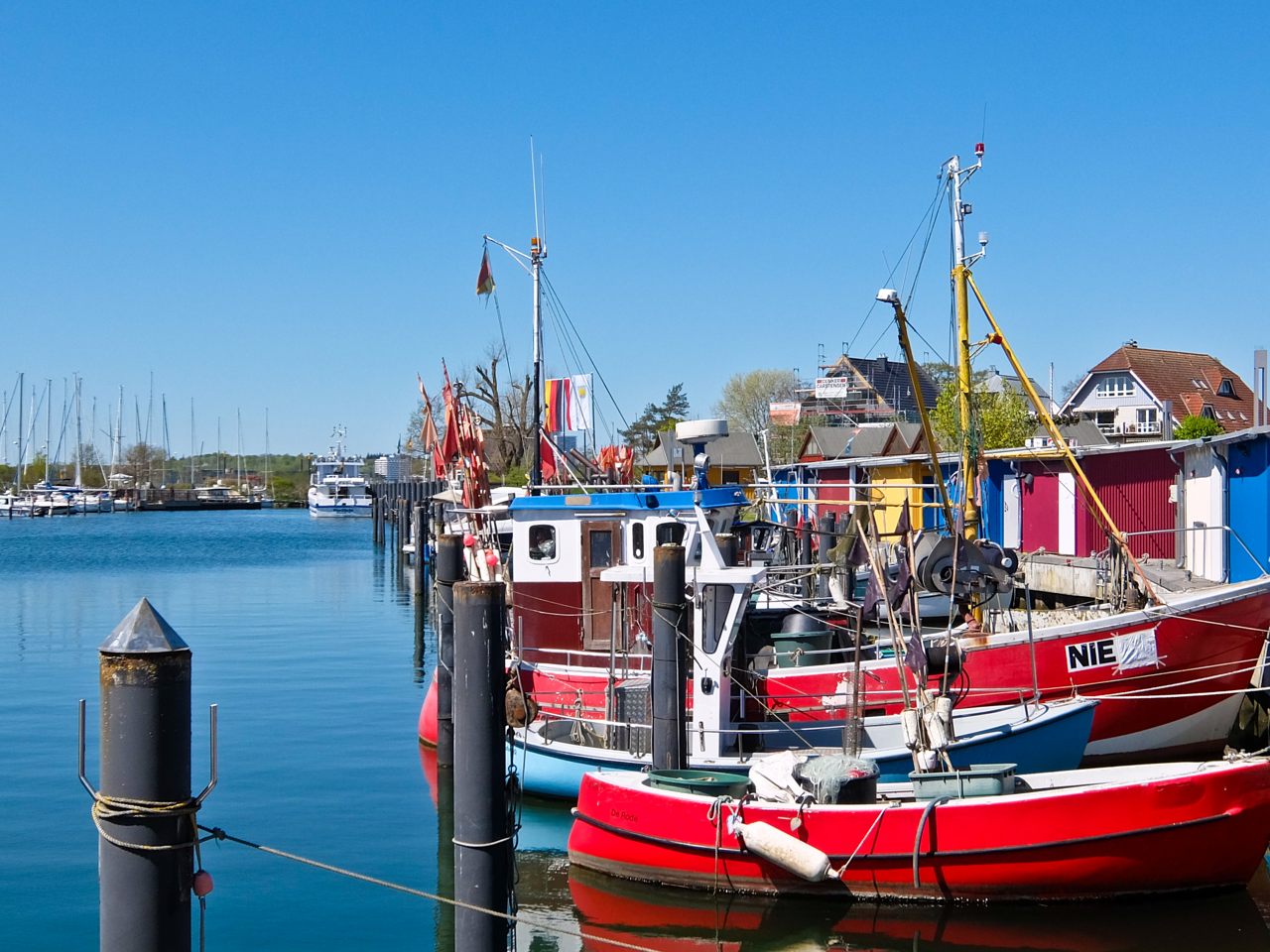 There’s time for an excellent fish lunch on the seafront at Mein Strandhaus before cycling back through the forest, stopping off at Karls Erlebnishof to sample the first strawberries of the season.

From Lübeck, I cycle south for three hours on a flat stretch of towpath to Hamburg. This was also a Hanseatic city but the medieval town is long gone, first destroyed by fires and then flattened during WW2. Most of the church spires survived, as they were used as landmarks for allied bombers, the churches have been rebuilt and there’s been much reconstruction of other important buildings. The Chilehaus, reminiscent of a ship’s bow, is a shining example of 1920s Brick Expressionism and its ten stories were one of Germany’s first high-rise buildings.

READ ALSO: Hamburg, Germany – the Capital of Cool with a thriving cultural, art and nightlife scene

The old port is also being revamped, as HafenCity, conserving the impressive brick warehouses, themselves now a UNESCO World Heritage site, and avoiding the mistakes of other dockland developments like Canary Wharf. They’re committed to providing affordable social housing and the new Elbphilharmonie concert hall is designed to impress. 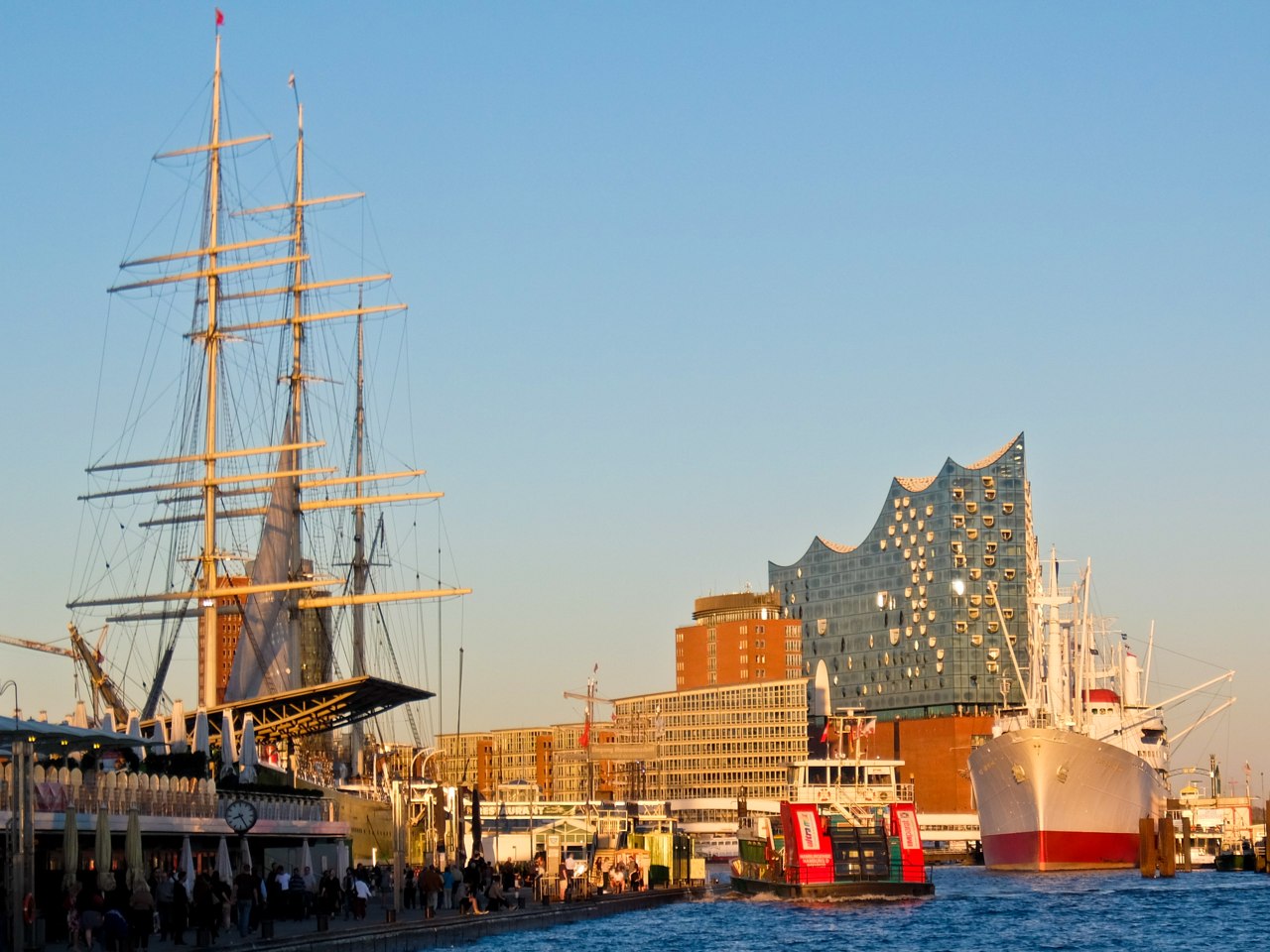 Cycling around the city is a joy, although often you share the pavement with pedestrians, but the locals don’t seem to object. The famous Reeperbahn is nothing to get excited about, full of inebriated tourists in pursuit of forbidden fun. Nearby, though, are interesting neighbourhoods with cafes, bars and restaurants. 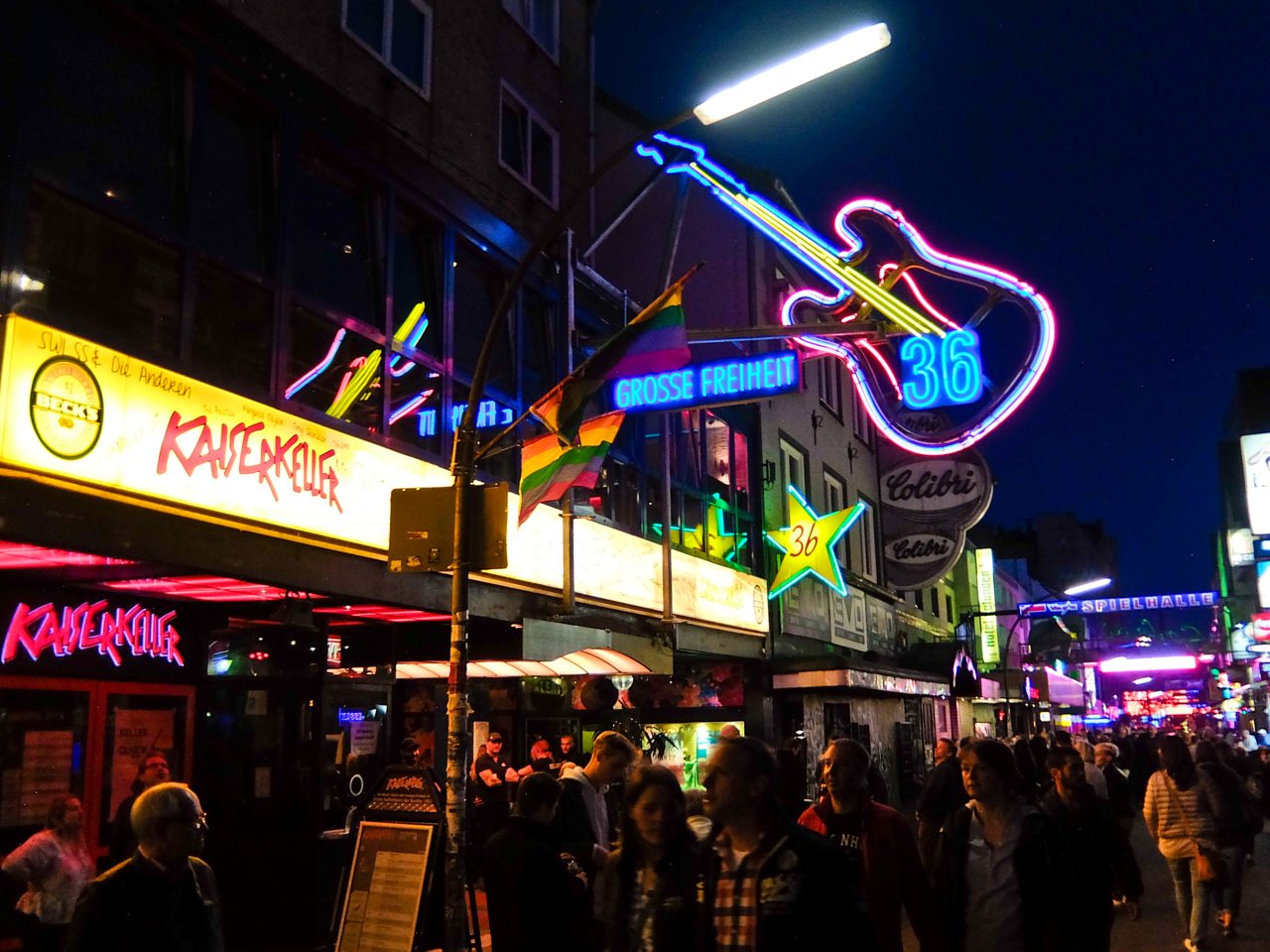 I’m pleasantly surprised by the Alster Lake which sits in the heart of the city, surrounded by a green ring of trees. I explore it first by cycling around the banks, passing through sophisticated residential districts. Then I take a one hour cruise going as far as the Alster River. Hamburg’s other river is the Elbe, the city’s main artery, home to the docks and route for huge cargo ships going to and from the North Sea. 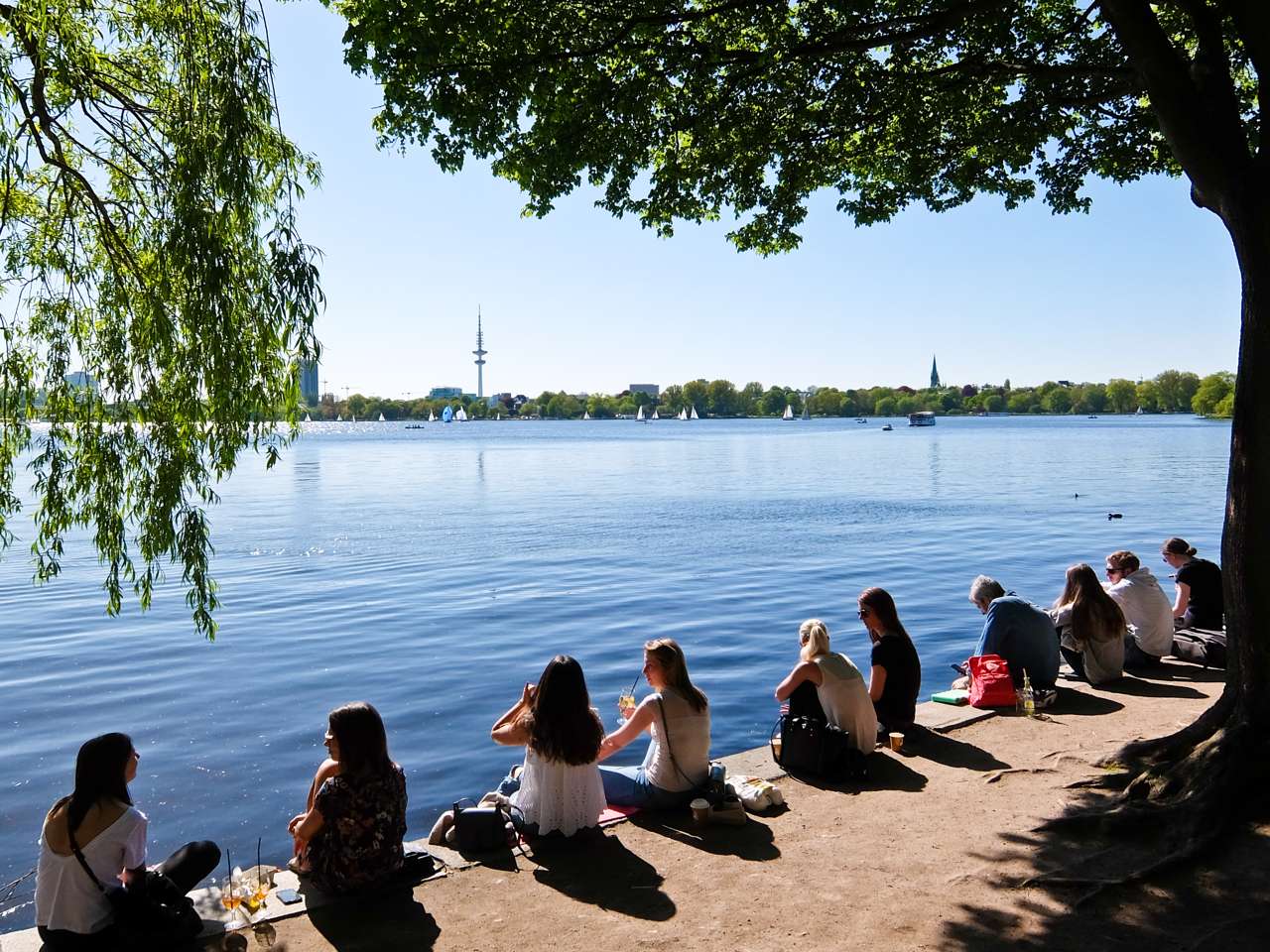 There’s a cycle route along its banks and my first stop is the International Maritimes Museum housed in one of those UNESCO warehouses. Three thousand years of seafaring history are covered on nine floors with memorabilia, model ships and paintings. Just down river is the fish market, more of a pit stop for night revellers getting their breakfast of beer and herring to the pounding of cover bands, although they do still sell fish here. 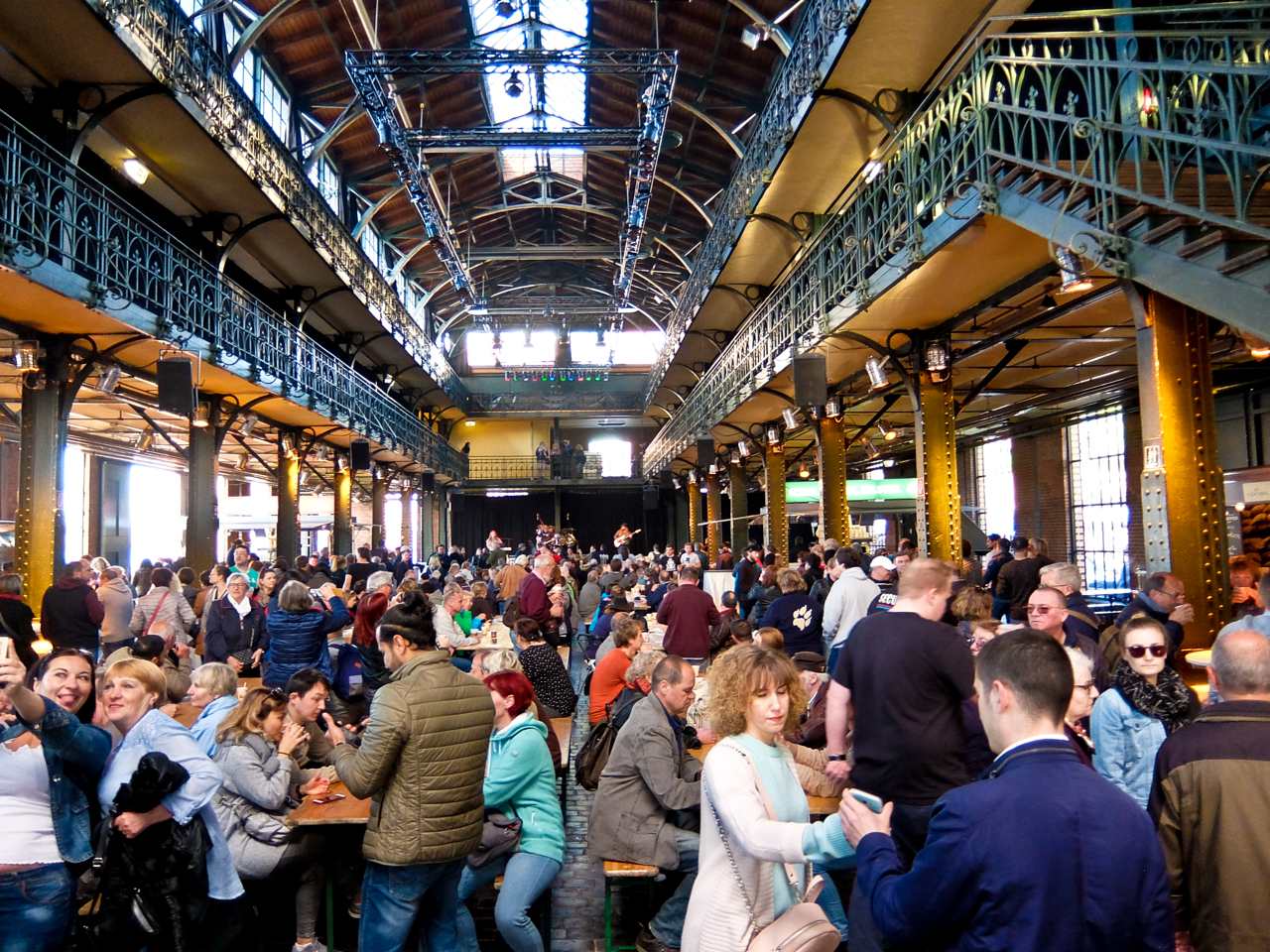 I continue above the river on a good trail to the suburb of Blankenese. Ship owners and merchants built their villas and mansions here in the 18th and 19th centuries and it’s now one of Hamburg’s most affluent neighbourhoods. It tumbles down the banks in a series of winding streets lined with rows of historic houses and chic cafes, perfect for afternoon tea. Where it meets the river is one of Hamburg’s most beautiful beaches.

It’s around three hours by bike to Lüneburg, slightly south east, a city literally built on salt. For 1,000 years, the precious “white gold” was extracted from deposits below with serious consequences. The mining caused major subsidence, distorting the streets, causing the buildings to lean and curve, and some, of course, have just simply collapsed. The history of salt can be discovered at the German Salt Museum in factory where the stuff was processed.

Fortunately, the city was spared WW2’s bombs so it’s one of the best preserved examples of a medieval Hanseatic city, its gabled houses a treasure chest of architecture. I climb to the top of the early 20th century Water Tower and get a view across red tiled rooftops, pierced by the slightly crooked spires of the three Gothic, churches. Below me is the Ilmenau River, where salt was loaded for transportation, and in the distance is the Kalkberg where the castle once stood. 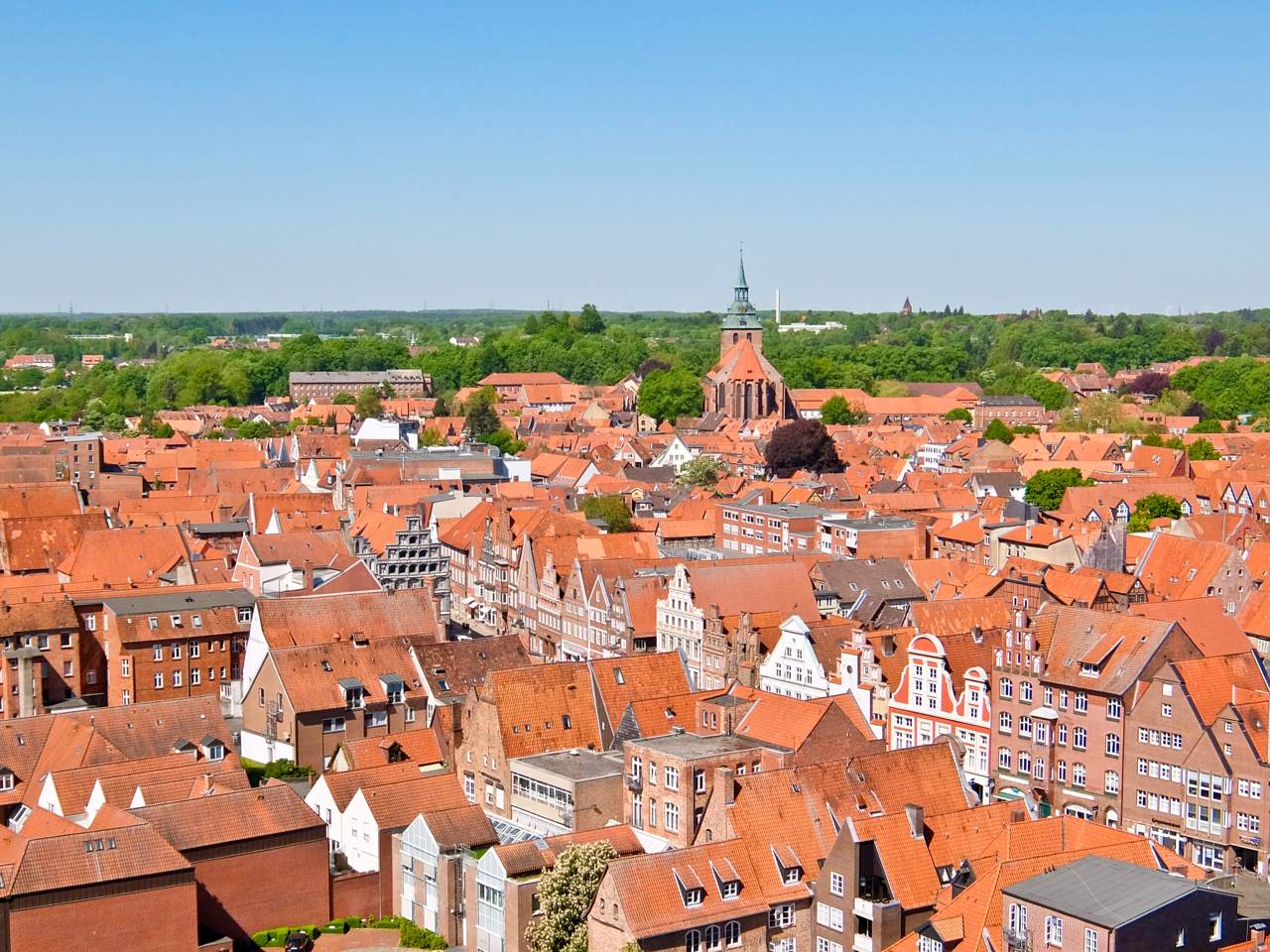 I cycle along the Ilmenau towpath for three miles to the tiny village of Bardowick. It’s hard to believe that this was once one of the most prosperous cities in North Germany until it was razed to the ground in 1189 by Henry the Lion. Luneburg rose in its stead and the St. Nikolaihof was built to here to house the city’s lepers. It consists of several medieval houses and barns surrounding a brick chapel, dating back to 1435, and home to the oldest organ in northern Germany. 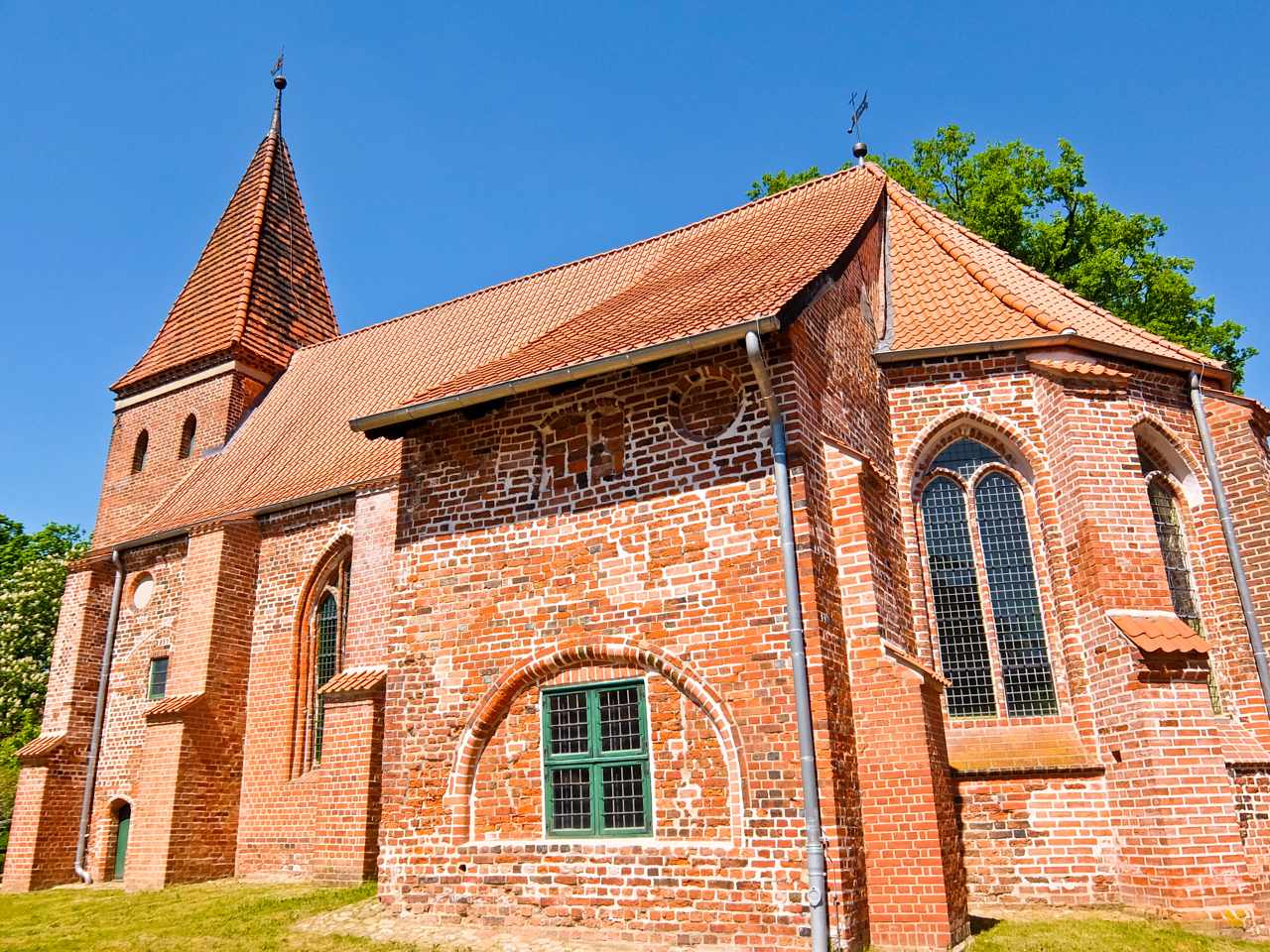 Back in Lüneburg I get a tour of the town hall, really a rag tag assembly of buildings, started in 1230 and growing until 1720 when its white baroque facade was constructed. The interior is full of surprises with a main hall lined with Gothic stained glass windows and 16th century frescoes of the last judgement. Even more impressive is the renaissance council chamber with intricate wood carvings.

The oddest item goes right back to the founding of the city. Legend has it that a hunter shot a wild boar, bathing in a water. When he hung up the skin to dry he discovered crystals of salt clinging to the pelt. There’s a bone in a glass case which supposedly comes from this famous boar. It’s hardly surprising that, with all this salt around, the city supported many breweries. Even now it has the highest concentration of pubs in Germany. 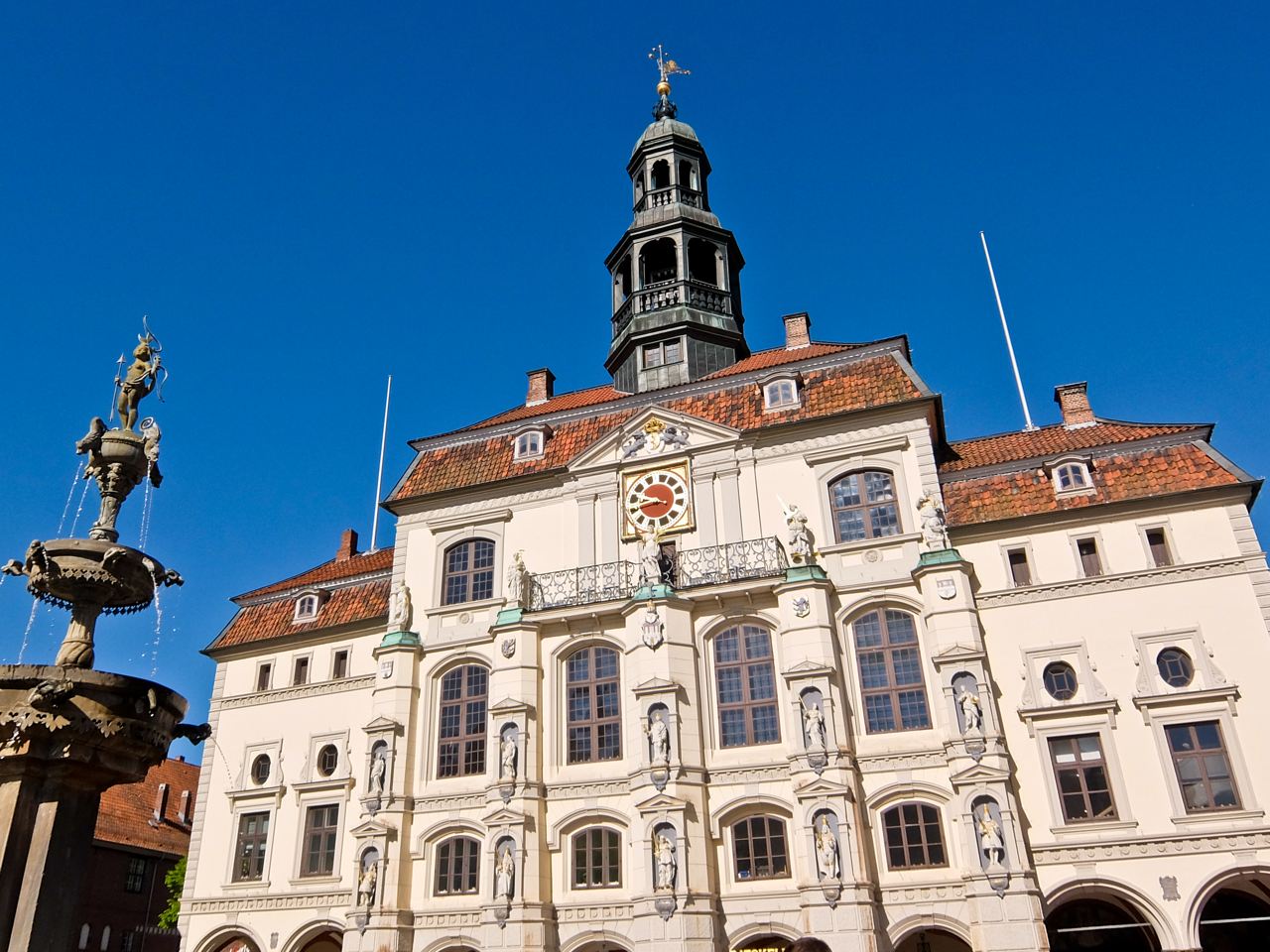 Count on at least a week to explore these three cities. You can do it faster by putting your bike on the train but you will miss the tranquillity of the countryside. Although you can visit in any order, better to start in Lübeck at the Hanseatic Museum to understand the historical background.

STAY: Hotel Innside by Melia is a new hotel in a central location.
EAT: Mutterland Cölln’s is Germany‘s oldest oyster bar and has excellent fish.
At Strand Pauli you can eat and drink watching the sun set over the Elbe.
MORE INFO: Hamburg Travel

STAY: Hotel Bargenturm is near the salt museum and makes a comfortable base.
Hotel Einzigartig is a stylish boutique hotel in the old quarter with good food.
EAT: Das Kleine is in the old harbour, and serves fresh local fare.
Mälzer Brau und Tafelhaus makes its own beer and has traditional delicacies.
MORE INFO: Luneburg Tourism

Tip: Deutsche Bahn will transport you and your bike on the train between cities.