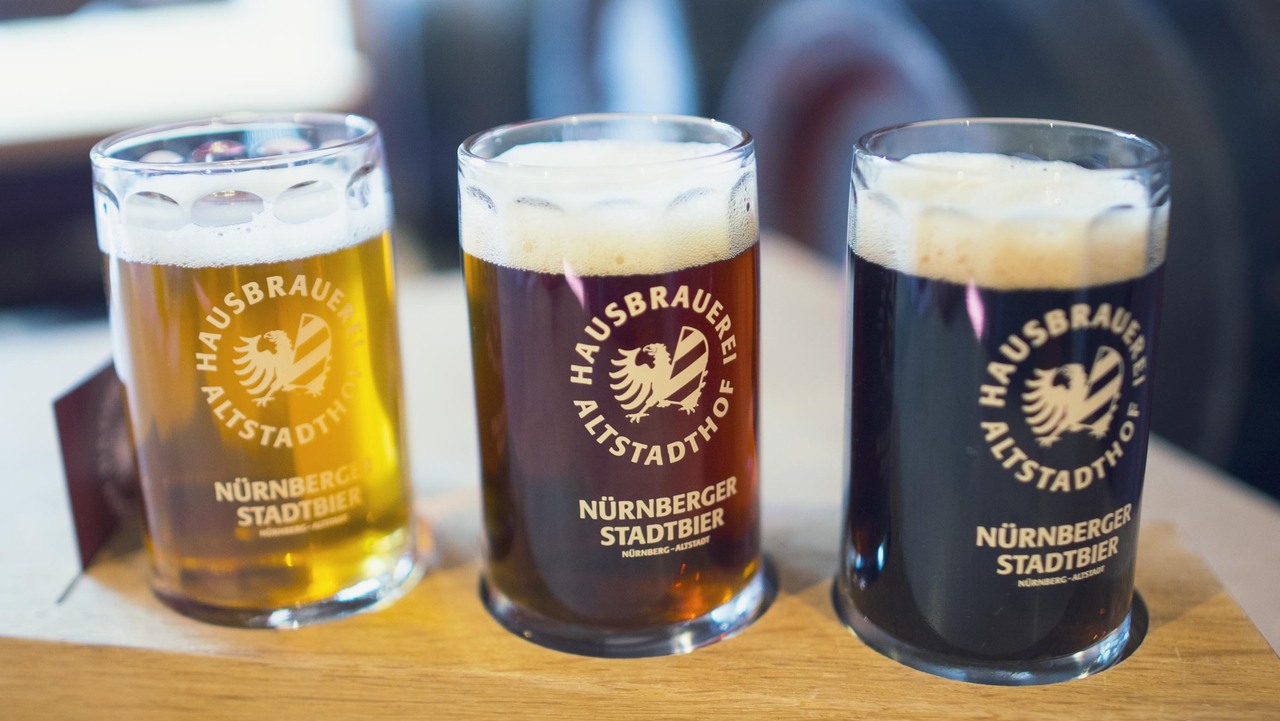 I boarded Eurostar 9116 at London St. Pancras International just before 9am to embark on beer trail through Rotterdam, Leuven, Nuremberg and Pilsen. By midday, I was sipping a ‘Noordt Dubbel’ dark craft beer at ‘Proeflokaal Reijngoud’ in Rotterdam.

Rotterdam has been described as a ‘living lab’, a focal point of urban innovation, sustainability and experimentation.

The City’s ‘innovation district’ incubates firms for the circular economy, no better showcased than by ‘Vet & Lazy’, a craft beer brewery, located in the bowels of ‘Tropicana’ a former subtropical swimming complex.

The brewery promotes sustainability initiatives, even creating a residual beer made with coffee beans from the organic ‘Aloha Bar’ also within Tropicana. 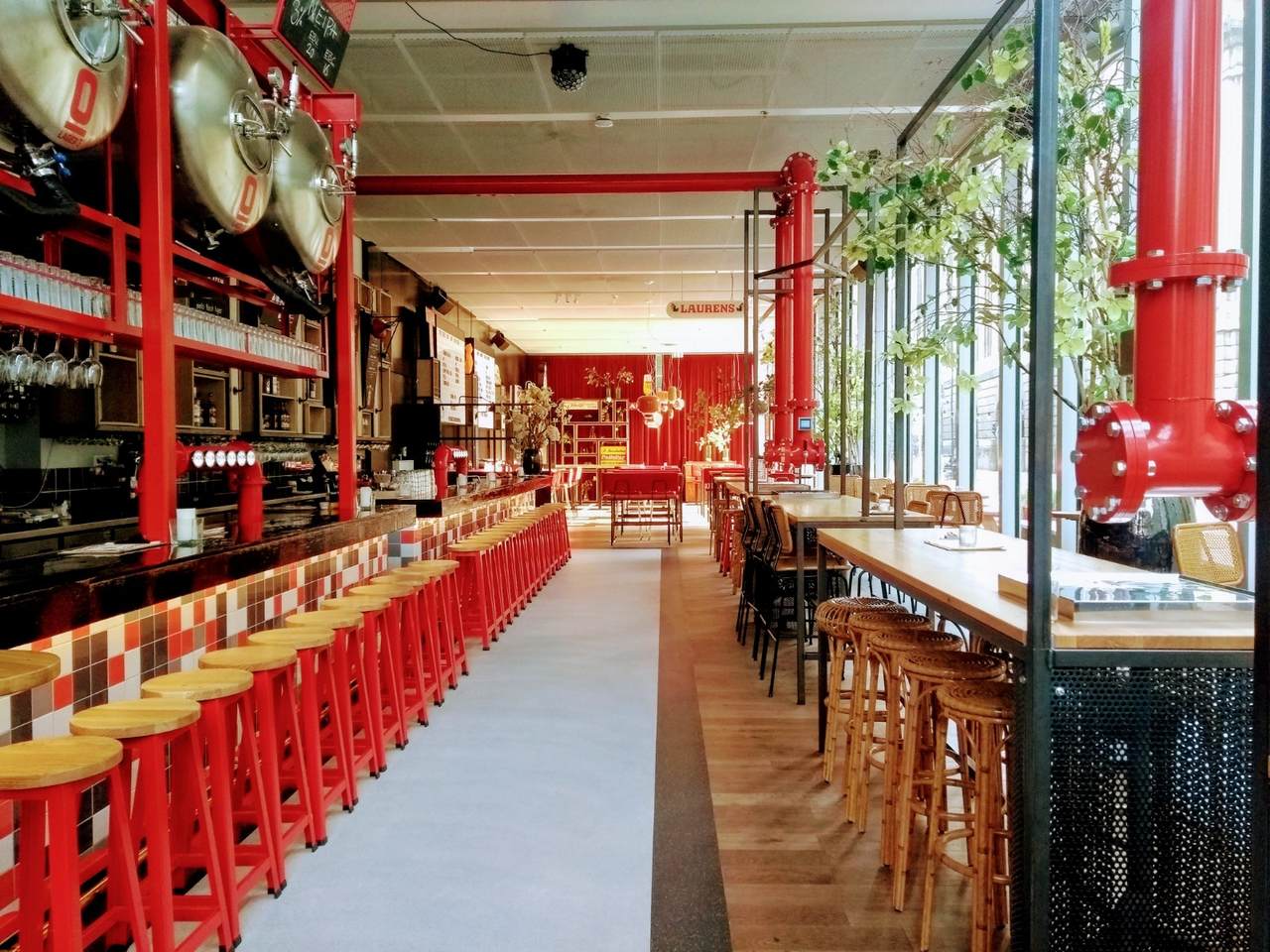 A quick skim across the River Mass by water-taxi brought us to a young brewmaster, Jazze Post who operates out from ‘Thoms Stadsbrouwerij’ (brewery) located behind city hall.

Jazze is pointing at Rotterdam’s longest bar when he tells us “we have a Thoms Pilsner, Pale Ale and IPA and they come directly from the tanks you see above the bar, so it’s unpasteurized and unfiltered which gives a unique taste. Our self-serve tables are also popular, especially during Oktoberfest events”.

The whistle-stop visit to Rotterdam included dinner at the popular ‘De Matroos’, before departing the architectural landmark of ‘Centraal Station’. Passing wind farms and suburban life next to the tracks, we soon reached Leuven.

Leuven is known as the ‘capital of beer’, a place where brewing culture and university are absorbed into the fabric of the city and let’s face it students and beer have always been a winning formula.

We followed students along ‘Bondgenotenlaan’, the main artery from the rail station taking us to the Grote Markt (town square), ‘Oude Markt’ and onto the palatial university library on Ladeuzeplein.

Brimming with bars and known as the ‘longest bar in Europe’, the Oude Markt is crowned by a series of Flemish-style gables, including KU Leuven’s earliest university building; a short walk from the square and the Flemish-Renaissance style library came into view.

Just outside Leuven is the newly regenerated former industrial district of ‘Vaartkom & Sluisstraat’. It has the ‘Brouwerij De Hoorn’, the old brewery building at its heart where I=in 1926 the first Stella Artois was brewed.

The brewery dates back to 1366 and Sebastian Artois took over as master brewer in 1708. The now redundant grand copper brewing kettles that rise to the ceiling like art installations, provide a unique backdrop for the ‘Leuven Innovation Beer Festival’ (LIBF).

Our visit to ‘Hof Ten Dormaal’, a family-run farmhouse brewery who cultivate their own grains and hops to churn out craft beers, was interesting. Jef Janssens, the family master brewer took us on a tour telling us “we are not scared to experiment” referring to a ‘Hemp’ beer called ‘Summer of 67’ and a limited edition 12 per cent Belgium Blond Ale aged in Jura Barrels.

Changing trains at Liège-Guillemins station, en route from Leuven to Nuremberg, unveiled an unexpected architectural gem, something that only rail travel can. Santiago Calatrava’s vaulted steel and glass structure arched over the platforms like a giant eyelid and peered out towards the city-centre panorama; a fitting backdrop, as our bullet-nosed Deutch-Bahn ICE train glided through.

“Beer saved us” – say Nurembergers who survived allied bombings during WWII. They had sought refuge within the 13th-century subterranean rock-cut beer cellars, which had taken 400-years to complete.

This wasn’t the only time ‘beer’ was seen as a saviour, having replaced the undrinkable waters of medieval times. The red-sandstone walls are still scarred by tunnellers and glow-in-the-dark phosphorescent plaques. 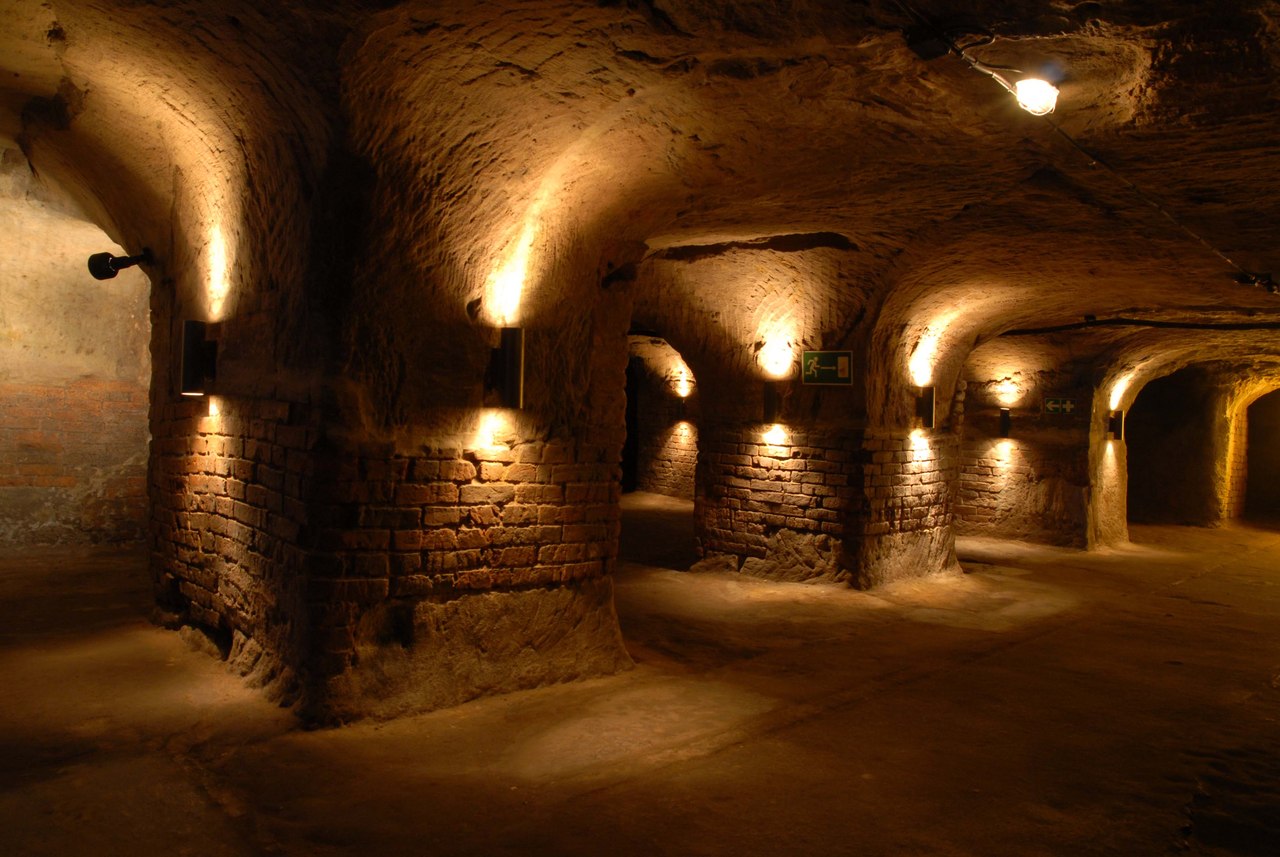 Our descent below the surface began directly behind the Albrecht Dürer statue, which alongside the nearby 16th-century artist’s house, survived the WWII. The kilometres of tunnel network stretches beneath the ‘Imperial castle’, once one of the most important royal palaces of the Holy Roman Empire. It peers down on Nuremberg’s photogenic centre.

The tour ended as we blinked back into daylight, emerging into the courtyard of ‘Hausbrauerei Altstadthof’, (brewery) to sample their malty Rotbier (red beer) and single malt whiskey (made from distilling beer).

Crossing the border and pine-covered forests between Germany and the Czech Republic, brought us to our final city destination, Pilsen.

Pilsen – Beer above and below the ground

Standing atop St. Bartholomew’s Church bell tower within Namesti Republiky (Republic Square), brought history, heritage and industry, past and present, into focus across the patchwork of rooftops; from the sinewy chimney stacks representing Pilsen’s ongoing industry in the form of ‘Skoda’ and the world-renowned Pilsner lager factory ‘Pilsner Urquell’. Other notable buildings included the elaborate Moorish-Romanesque style ‘Great Synagogue’ and frescoed Renaissance façade of the old town hall. 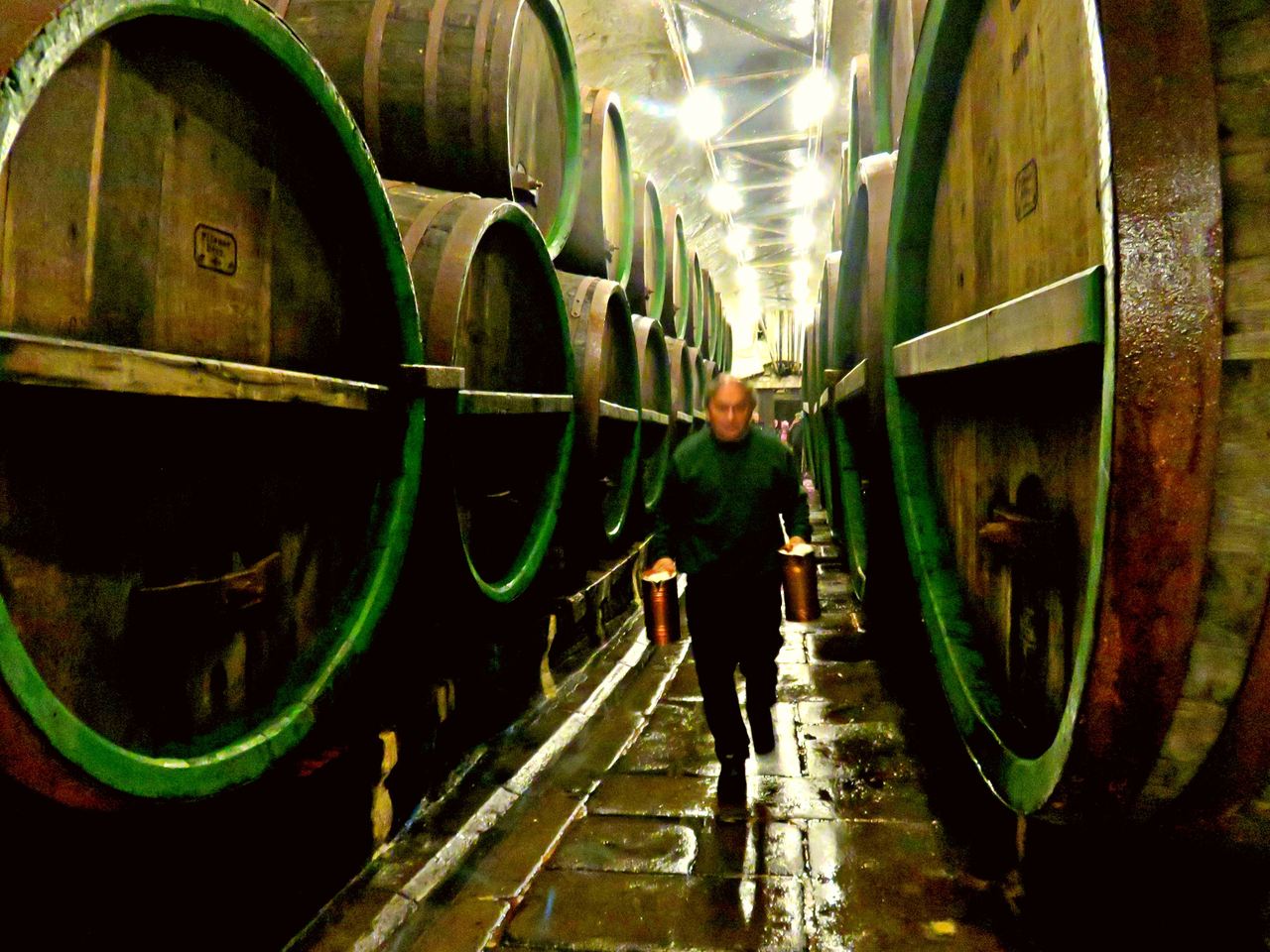 Locking the wrought iron gate behind him, our guide led us on a tour of early medieval artefacts and water wells within tunnels that would have once connected with the beer cellars of our next stop ‘Pilsner Urquell Brewery’ several kilometres away.

The story goes that in 1838, 250 Burghers emptied 36 kegs of beer into the main square, in front of the Town Hall because they were disgruntled by its poor quality. The following year, the Burghers of Pilsen founded a new brewery and invited Bavarian master brewer Josef Groll to brew a drinkable beer. On the 5th October 1842, Pilsner-lager was created and even today, within the Pilsner Urquell brewery cellar complex, one can tap their own Pilsner straight into the glass from huge oak barrels. 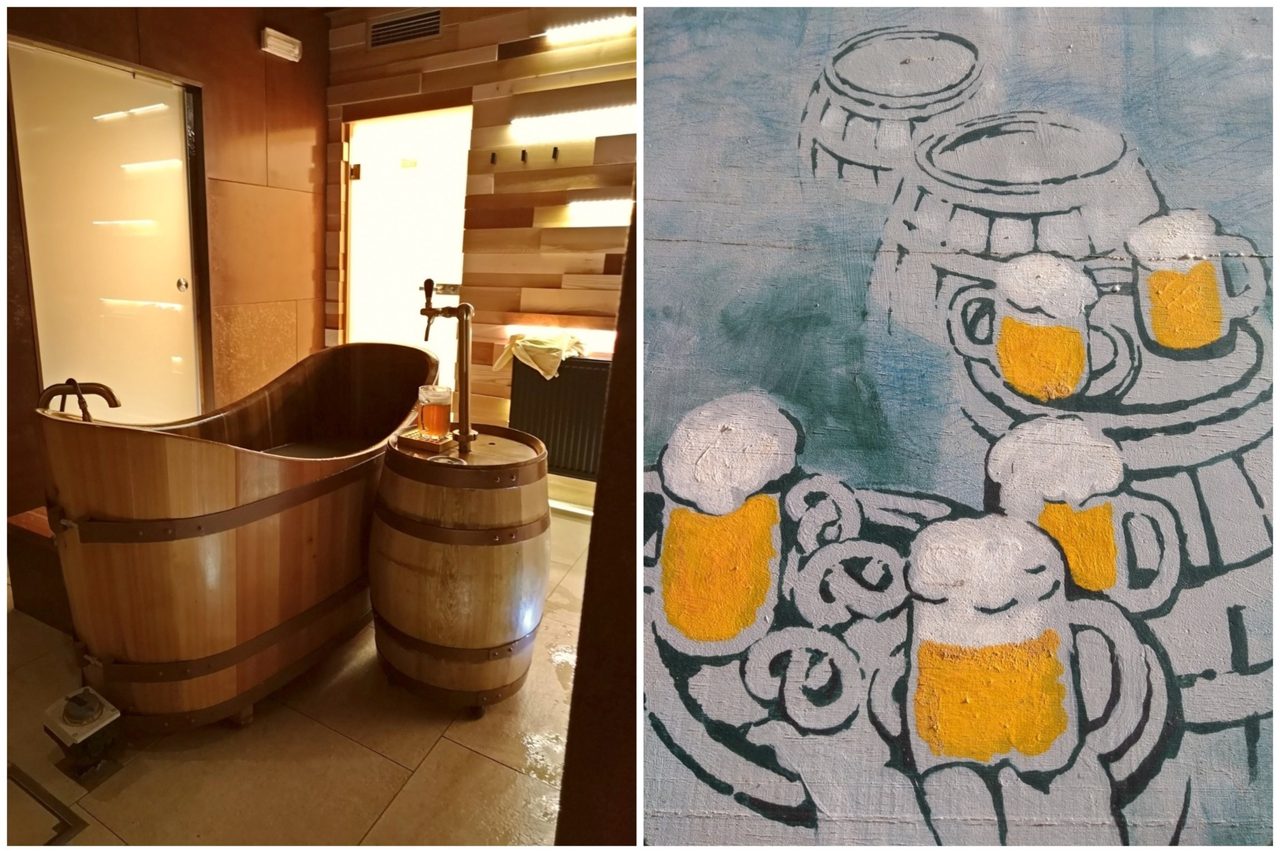 In a country that consumes the most beer per capita in the world, the chance to bathe in it at the ‘Purkmistr microbrewery’ on the outskirts of Pilsen, was no surprise.

We ended our beer-hopping rail tour submerged in several litres of unfiltered and unpasteurized beer, mixed with water containing crushed hops and beer yeast to support blood circulation and skin nutrition. The only tap associated with the bath, was the one to fill your glass with beer, helping me to think up my next theme and journey by Interrail; with rail access across 31 European countries, the only limit was my imagination.

Travel with Interrail
You can purchase a global pass which allows unlimited train journies through 31 countries. Costs start from £146.00 for 3 days within 1 month