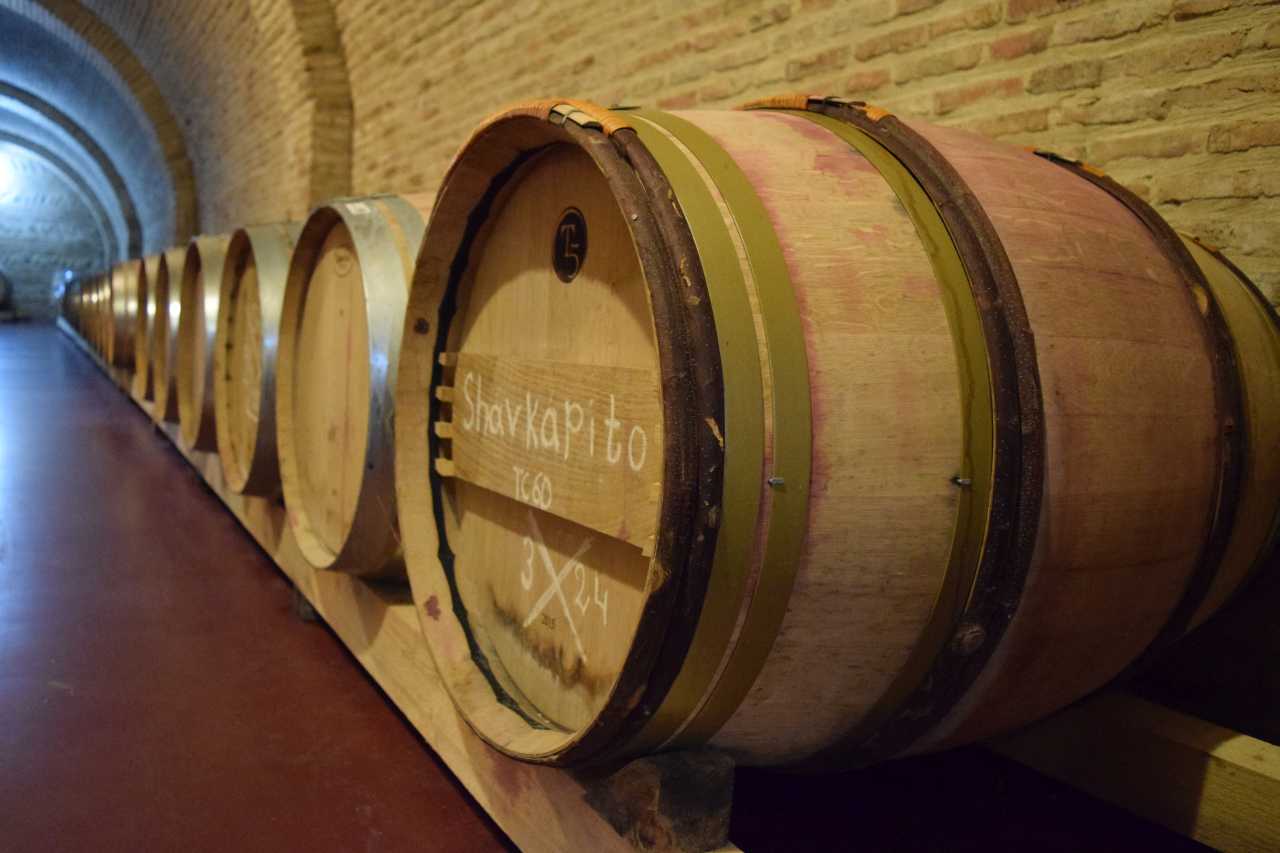 If you reel off the great wine regions of the world, you think of France, Italy, and Spain, and possibly Australia, South Africa, and California. But real wine lovers should really be looking to the Caucasus, as it’s here that you’ll find 8,000 vintages, more than 400 varieties of grapes, and a culture which is inextricably entwined with viticulture. Wine making in Georgia has been recognised by UNESCO on the Intangible Cultural Heritage List, and this year UNWTO chose the country to host their first conference on wine tourism.

What’s all the fuss about Georgian wine?

The Georgians invented wine making sometime in the 6th millennium BC, and so they’ve had plenty of time to perfect the art. The country’s medieval monasteries were veritable universities of viticulture, keeping meticulous records about grape varieties, terroir, and factors which affected production. Members of the church congregation were expected to tithe a certain amount of the wine they made for use as sacramental wine, and it was the most valuable asset that many of the churches possessed. Priests fortified the church wine sellers, and would defend them to the death!

Many of Georgia’s wine makers still produce wine using traditional techniques, and the resulting flavour is quite different from that of wines made using European methods.  Firstly, every part of the grape — including the skin, seeds, and even stalk — is fermented along with the juice. This gives the white wines a much darker colour, and hence they are known as amber or orange wines. The wine is fermented in a qvevri, a pointed terracotta vessel similar to an amphora, which is buried in the floor of the wine cellar. The qvevri is lined with lime and beeswax, and as it is subterranean, the wine is at a constant temperature throughout the fermentation process. Due to its shape, the sediment naturally sinks to the bottom, so there’s no need for the wine maker to add sulphites to separate it from the wine. 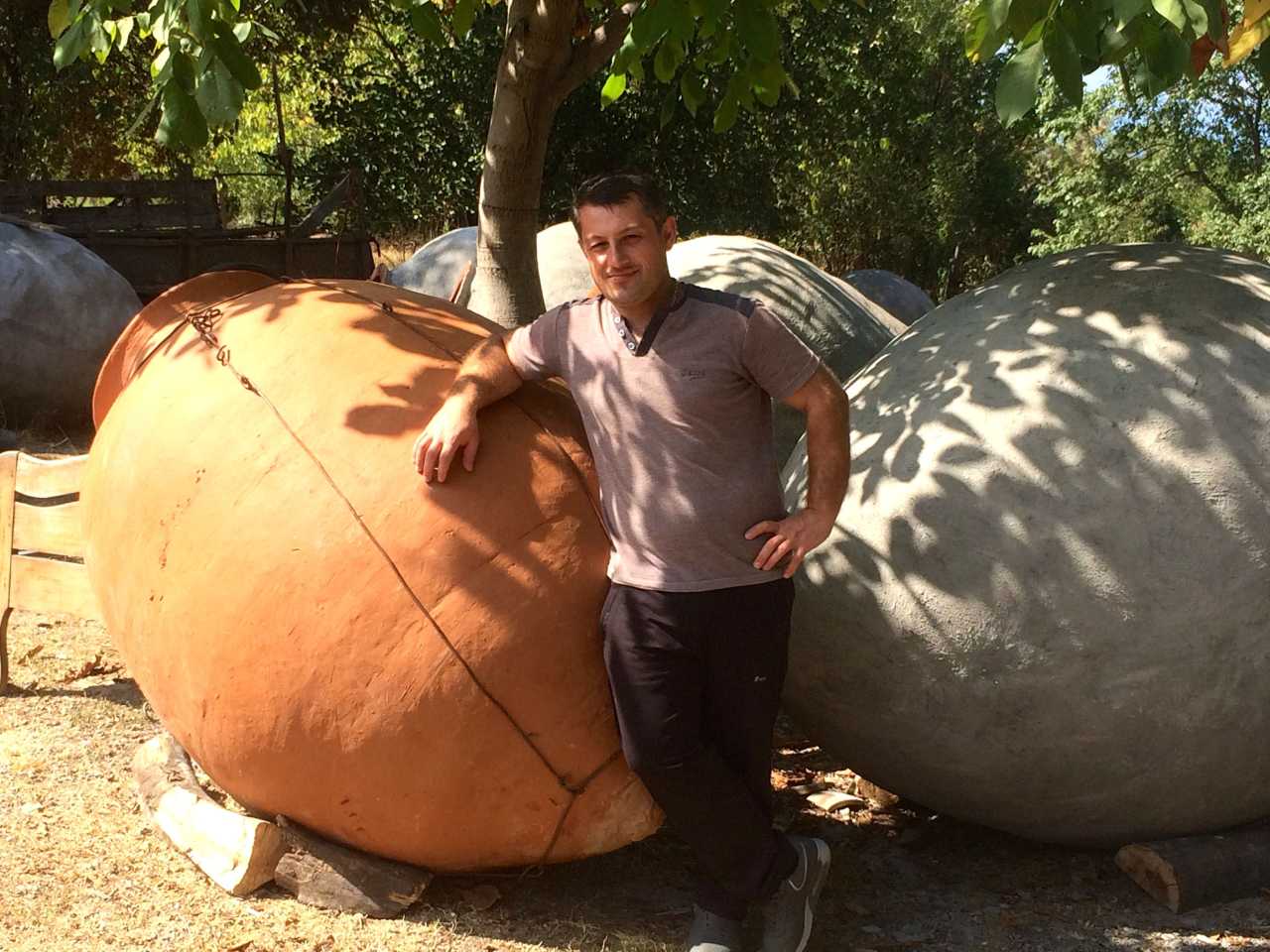 It seems that every Georgian you meet has knowledge to impart about wine making! But as you travel around the country, there are definite spots of historical significance, and centres of expertise. 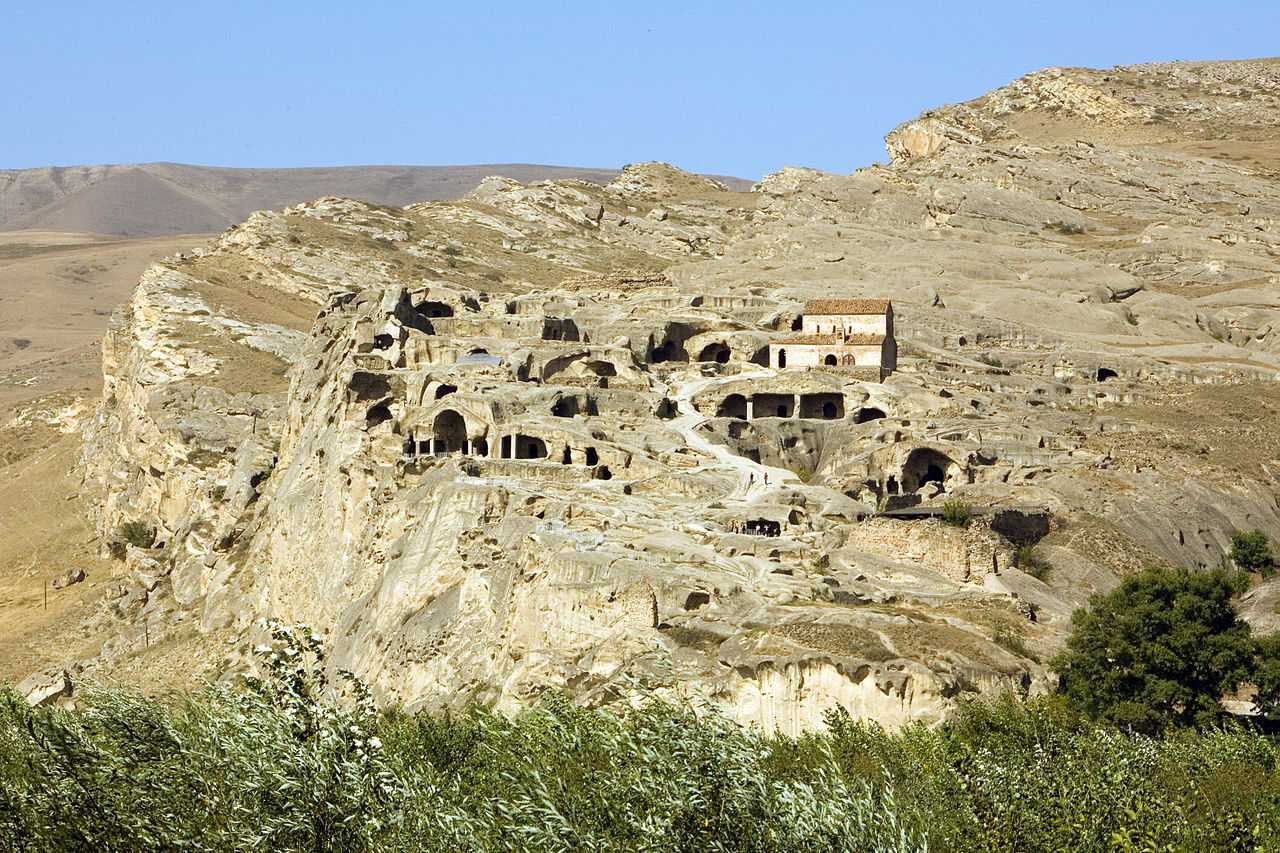 The earliest parts of the Uplistsikhe Archaeological Museum date from the 10th century BC. It’s a rock-cut monastery complex, similar in many ways to Cappadocia in Turkey, and amidst the vaulted caves is evidence of early wine production: 3m-long troughs in the rock where grapes were crushed under foot, and narrow channels through which the juice would flow into secondary troughs or pots. 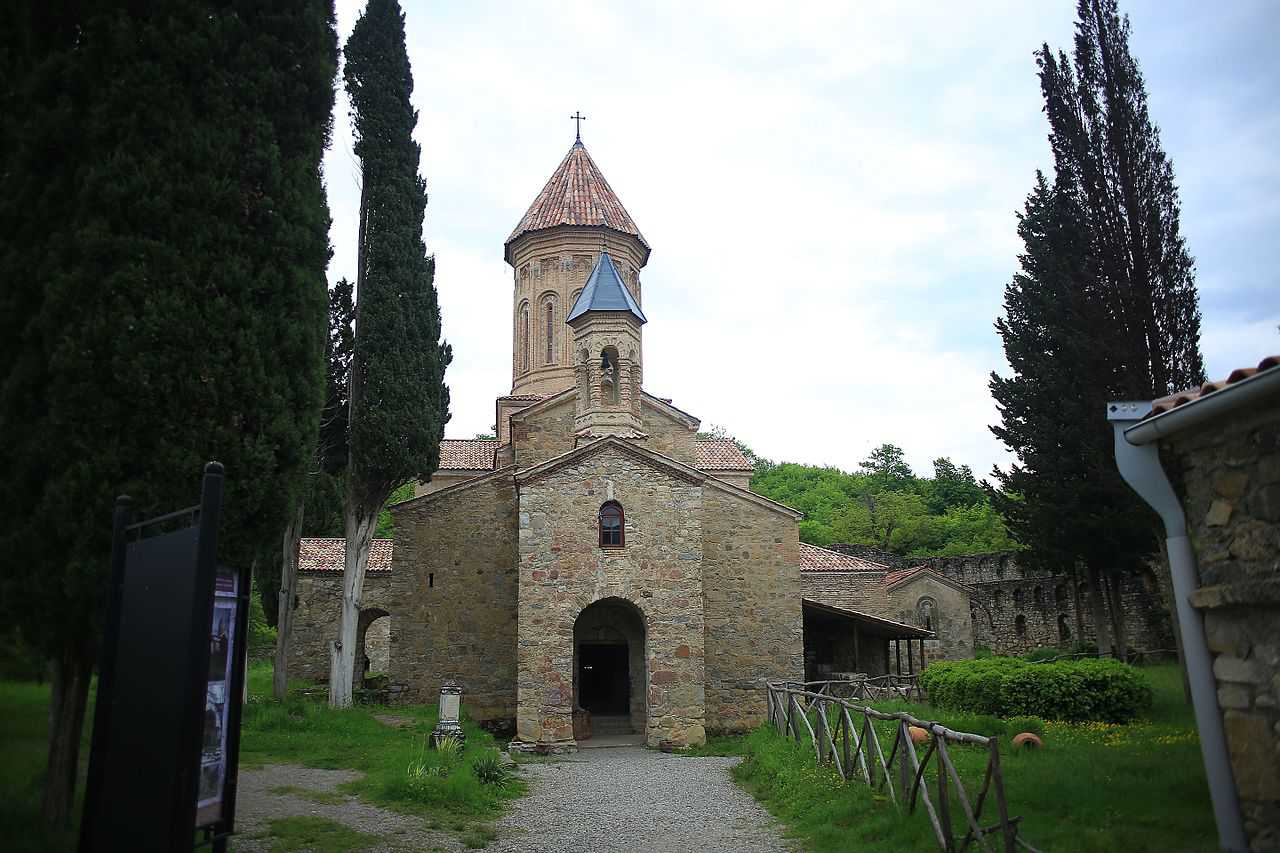 The Ikalto Monastery, near Telavi, was an ancient academy, where priests were trained in theology, rhetoric, astronomy, philosophy, and wine making: the pillars of a good education. The recently restored complex of churches and  ecclesiastical buildings is scattered with grape presses and wine cellars, and lines of discarded qvevris. 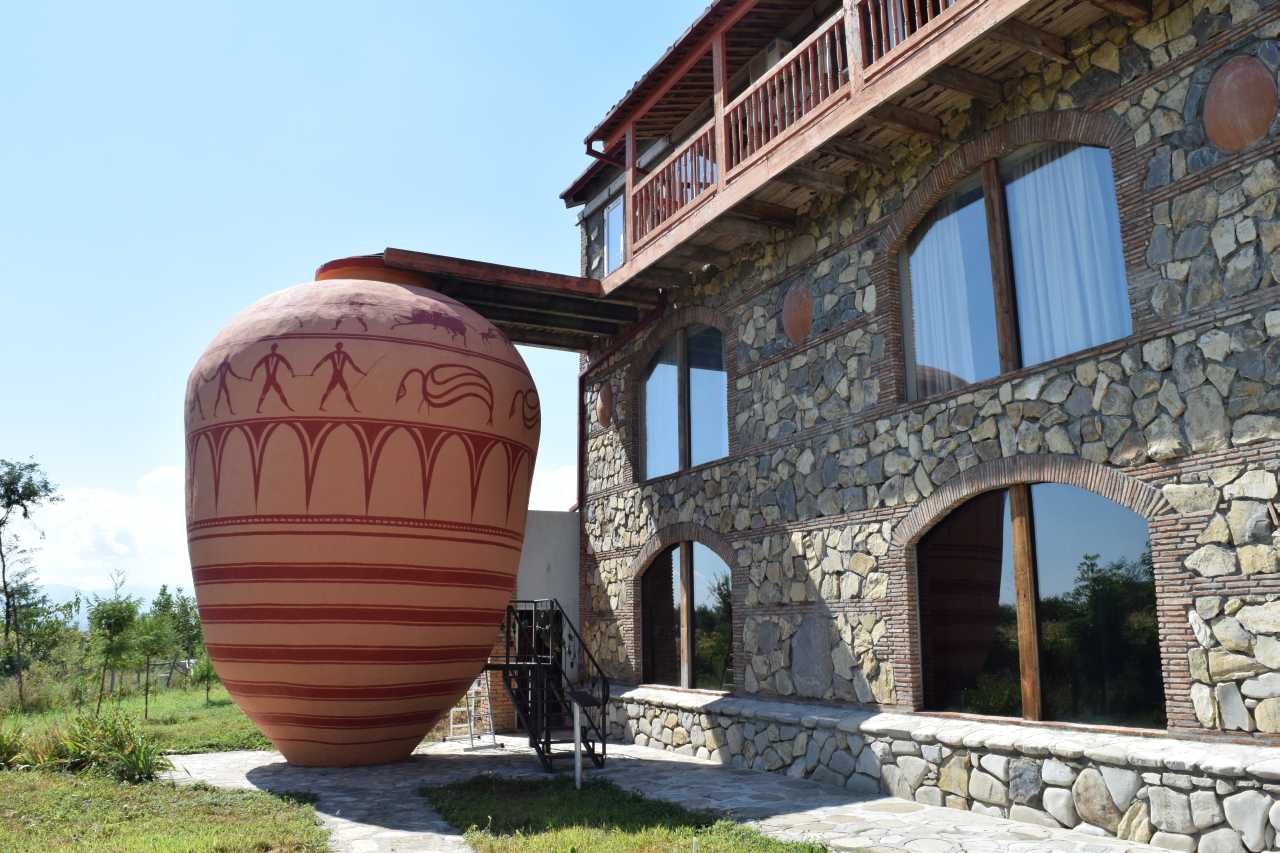 If you want watch wines being made, visit Twins Wine Cellar in Napareuli. This combined vineyard and winery is run by twins Gia and Gela Gamtkitsulashvili, and they’ve developed the site for agritourism: you can join in the grape picking and pressing, climb inside a two-storey-high qvevri, learn about the history of Georgian wine making in the museum, and meet the wine makers themselves. The twins use traditional techniques, and have 107 qvevris in their cellars, and also arrange tastings.

Where are the best places to drink it? 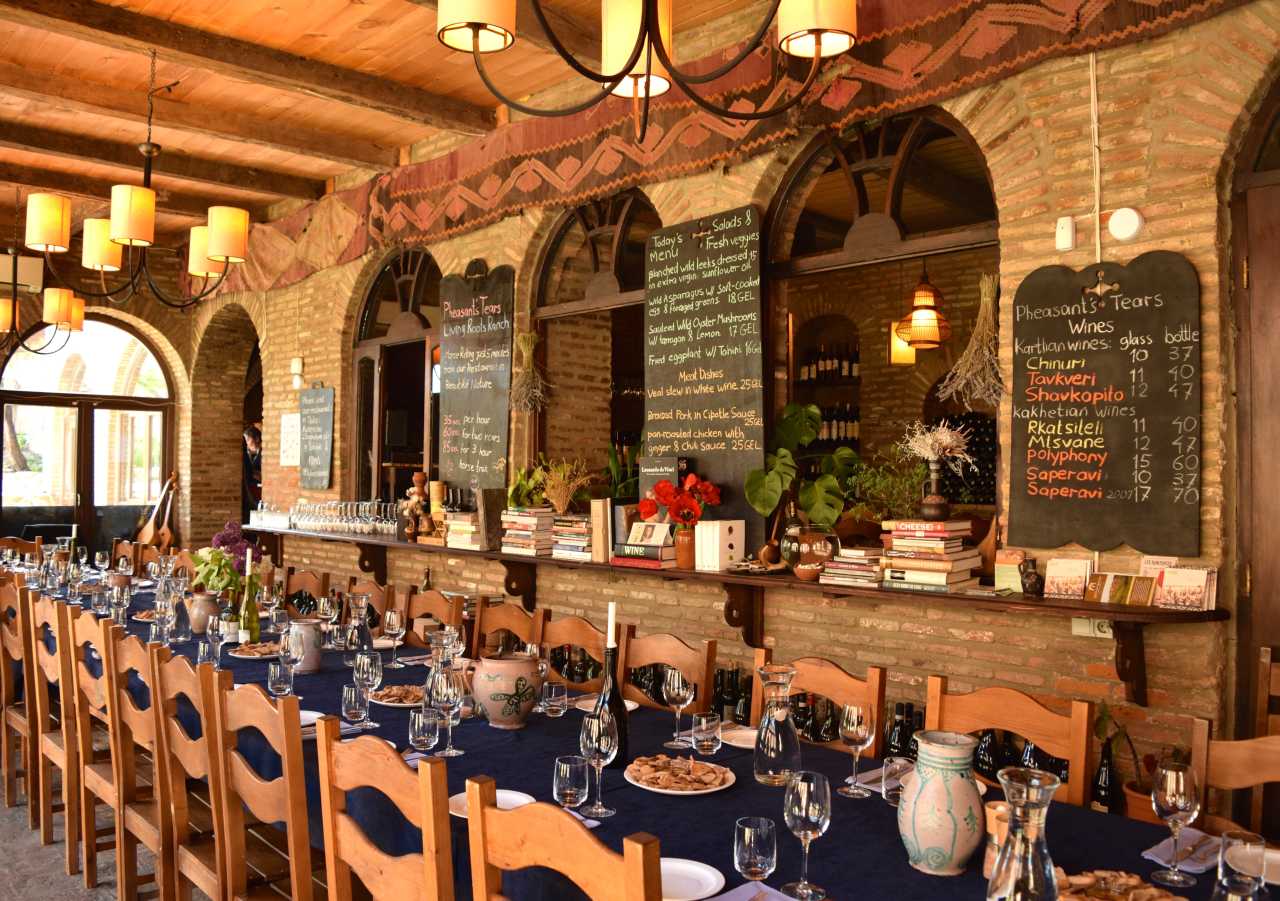 In Georgia, there are no shortage of places to stop and drink wine, but if you are looking for both quality and range, several options spring to mind.

In Tbilisi, Vinotheca has an excellent selection in their shop, and Barbarestan and Cafe Gabriadze both offer an extensive wine menu alongside mouthwatering Georgian dishes. Two wineries to particularly look out for (and drink whenever you can find them) are Lagvinari and Pheasant’s Tears, both of which are made in qvevris, and which are fine examples of the traditional Georgian style.

Note: If you are travelling from London, you can try before you fly at Hedonism in Mayfair. They stock Lagvinari, and the Georgian Wine Club has a good selection of red, white, rose, and amber wines.

What else is there to see? 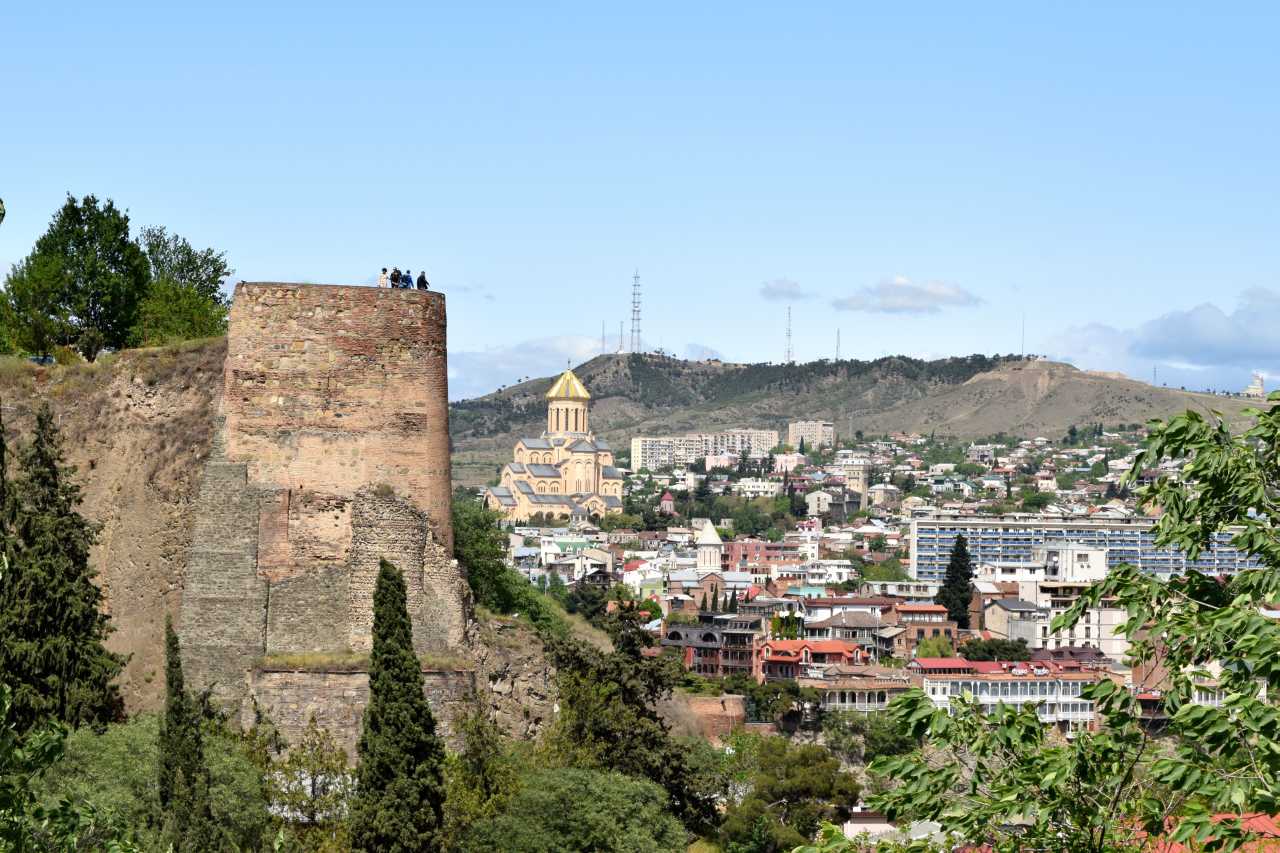 Though the wine is wonderful, there’s more to Georgia than the mighty grape. The capital, Tbilisi, is culturally rich, with numerous museums, galleries, a botanical garden with waterfalls, dramatically situated fortress, and a charming Old Town packed with historic buildings, cafes, and shops. Quirky things you won’t find elsewhere include the Abanotubani district of domed sulphur baths, and the Gabriadze Theatre, which puts on extraordinary puppet shows, including a re-enactment of the Battle of Stalingrad.

Christianity arrived in Georgia in the 4th century, and so there are also some exceptionally old churches, several of which are UNESCO World Heritage Sites. The 12th century Gelati Monastery has jaw-droppingly beautiful murals in vivid colours, and the Jvari Monastery near Mtskheta is said to have been founded by Saint Nino, the female evangelist who introduced Christianity to the country. 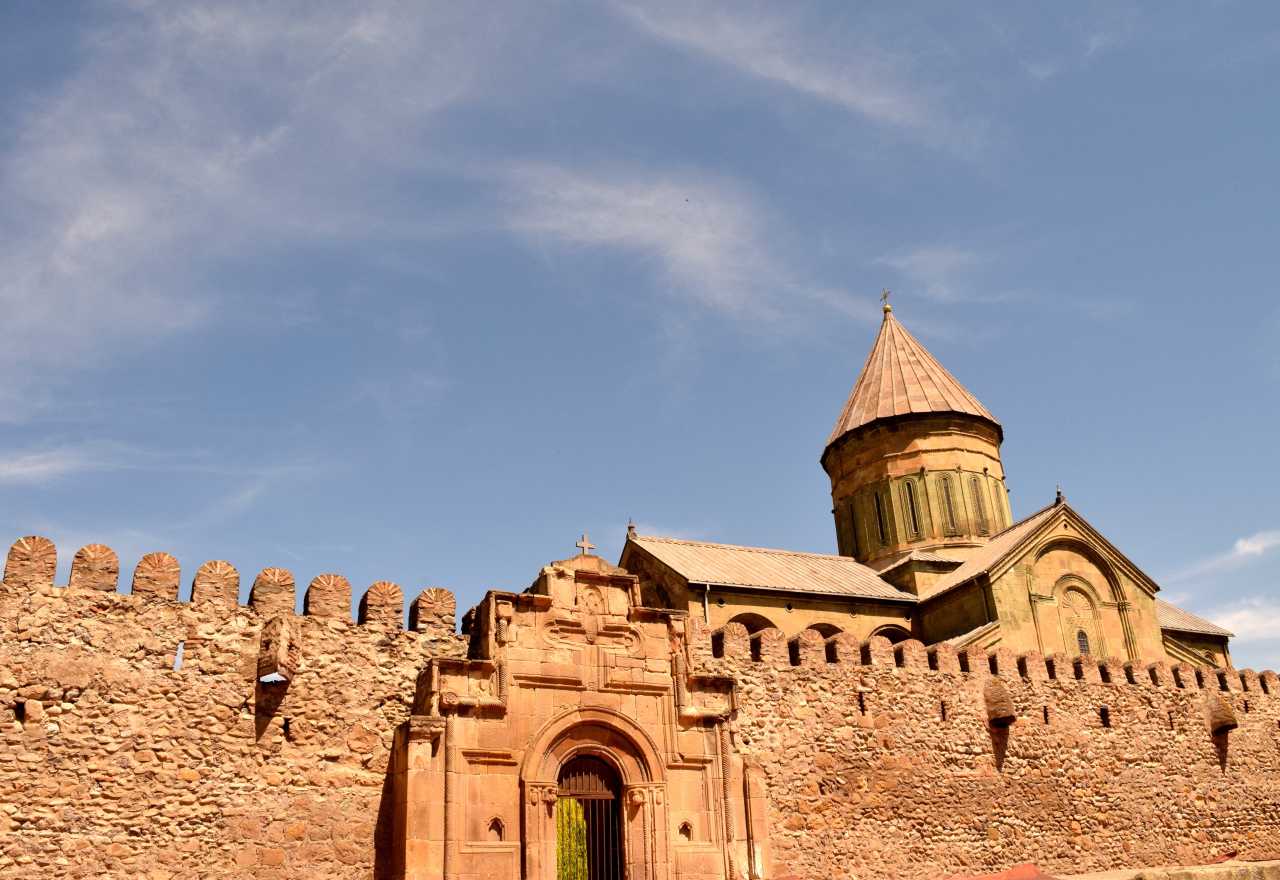 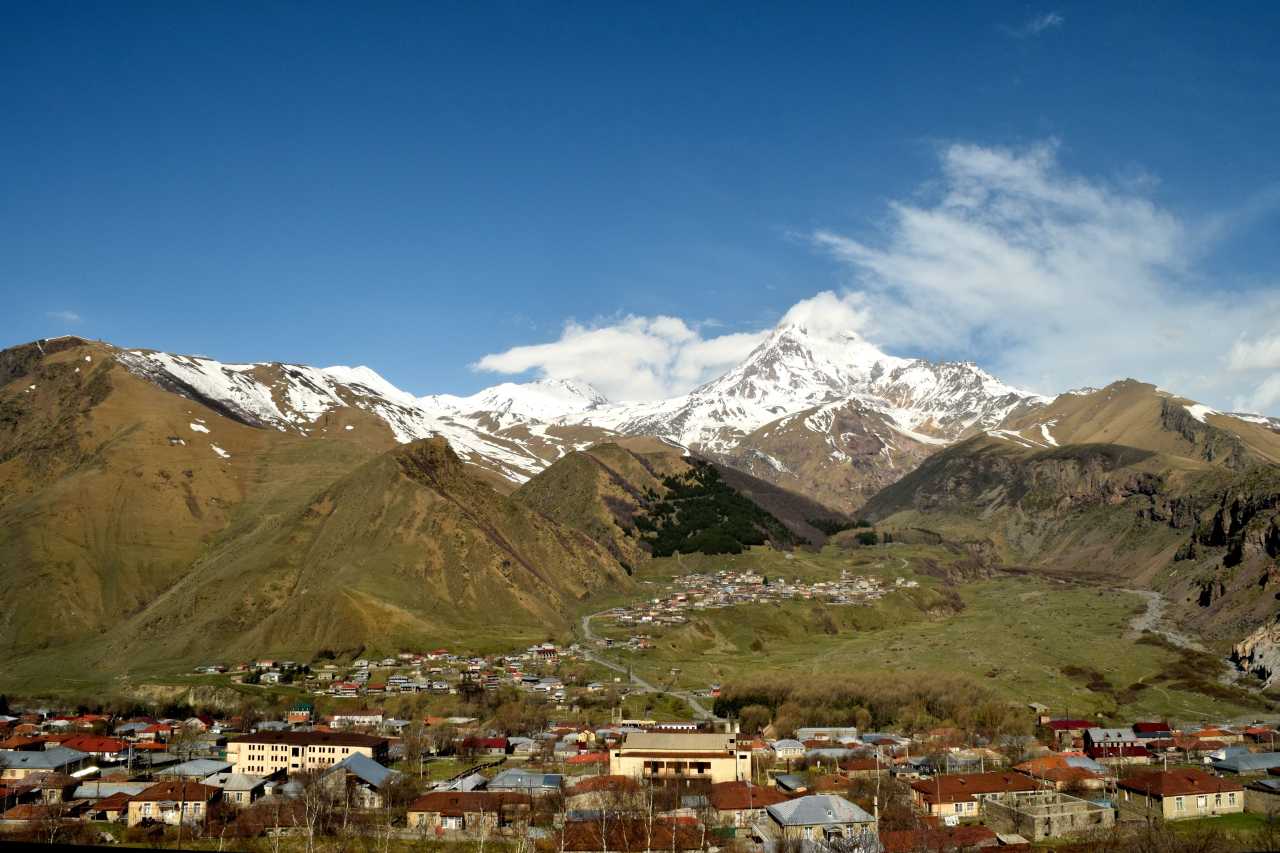 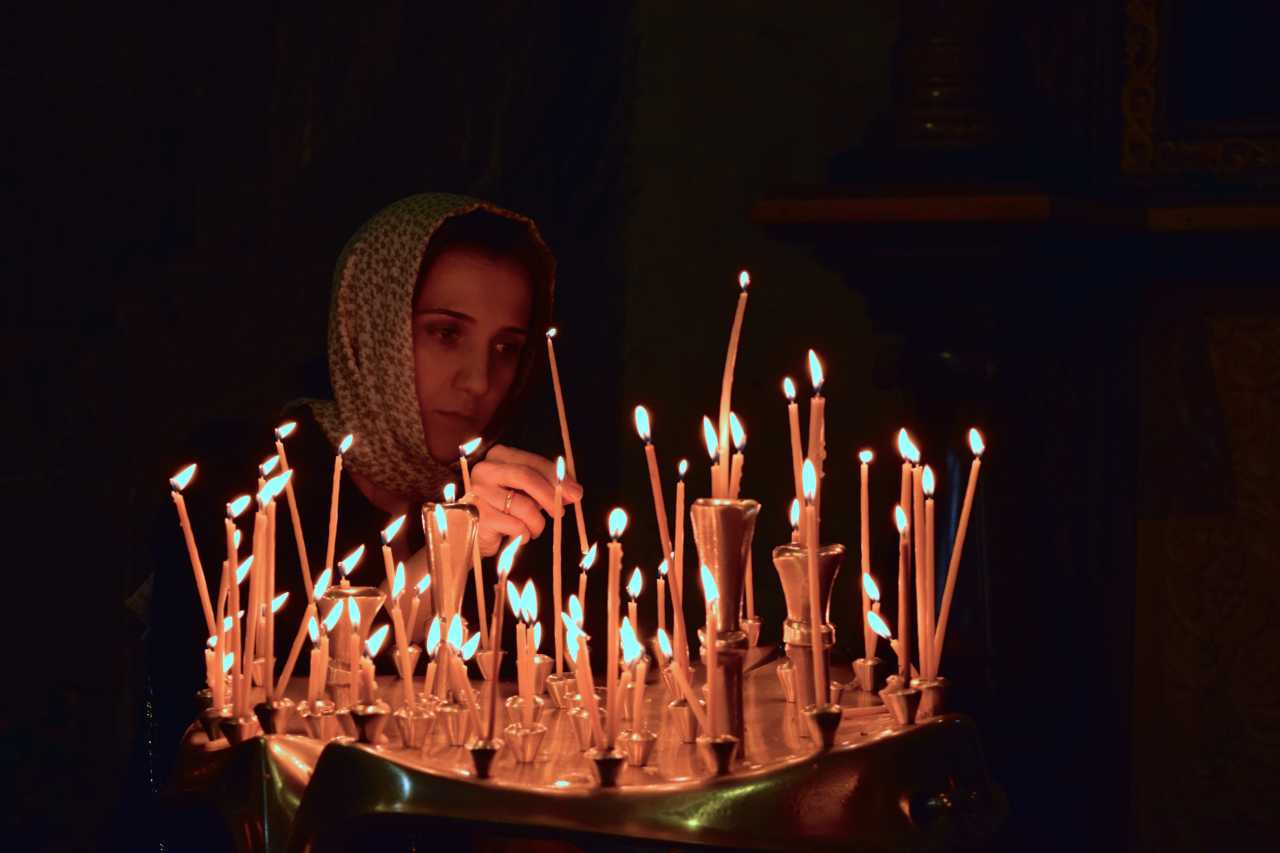 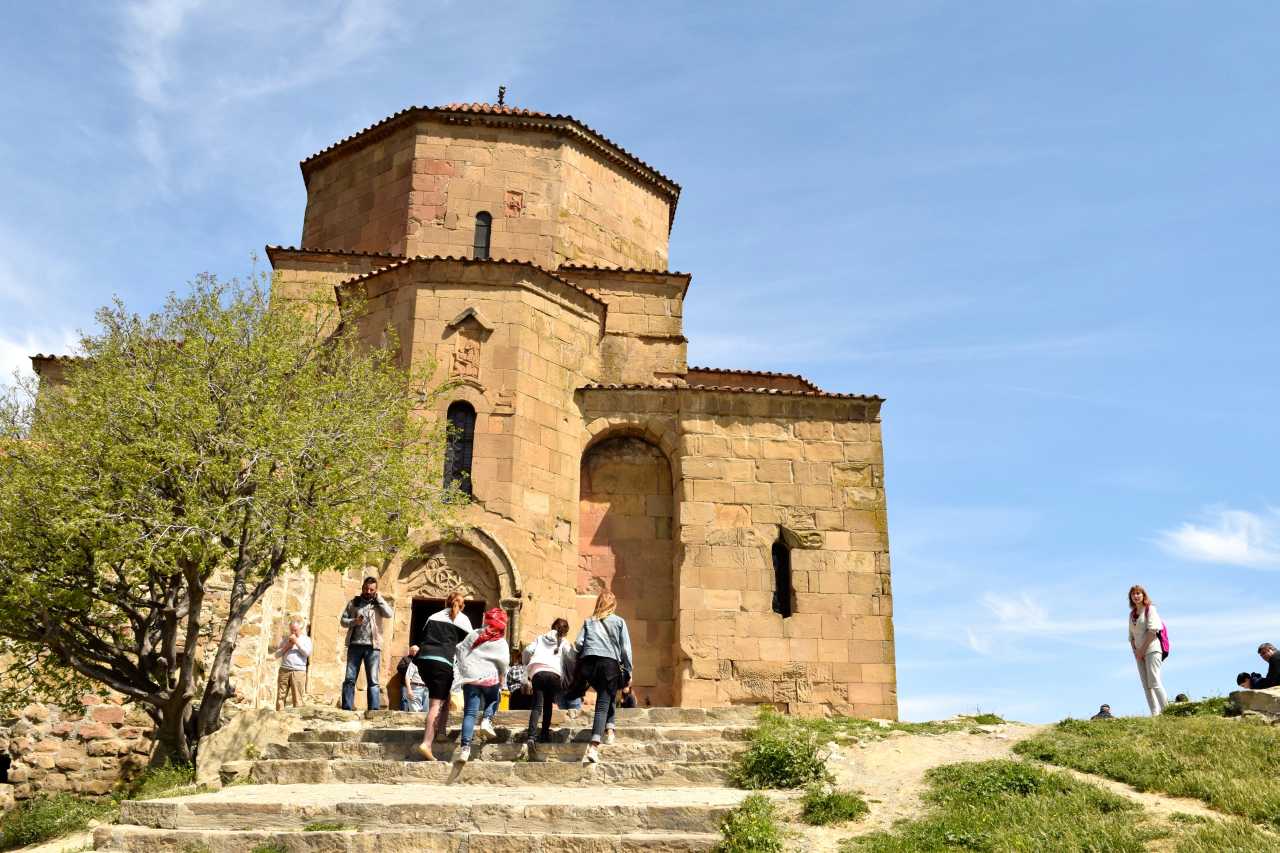 The Caucasus Mountains stretch across much of Georgia, creating a dramatic backdrop to valleys and towns, and numerous opportunities for hiking, mountain biking, and skiing. Gudauri comes alive in the winter months as the winter sports capital of the region, and the wildernesses of Svaneti, Tusheti, and Kazbegi are waiting to be explored.

Vinotel has to be the first choice for wine lovers coming to Tbilisi. It’s a boutique property in the Old Town with just 13 suites and rooms. The atmospheric restaurant and vaulted wine cellars are the big attraction, however, so even if you’re not staying, you can pop by for a wine tasting.

Larger and quirkier is Rooms Hotel Tbilisi, a design hotel with a passionate fan base of celebrities, artists, musicians, and lovers of Soviet-kitsch. Converted from a former print works, the hotel’s style has a glamorous hint of 1930s New York, but it’s still very much Georgian, with silkscreen graphics, antique mirrors, and leather furniture.

In the wine region of Kakheti, you can stay on the vineyard at Twins Wine Cellar. You have a choice of simple double or family rooms, all with views of the Caucasus Mountains. And of course you can drink wines straight from the cellars!

You can fly from London to Tbilisi return with Pegasus Airlines for less than £200. There are also good flight connections with Turkish Airlines via Istanbul, or airBaltic via Riga.

Brits and other EU nationals do not need a visa to enter Georgia, and can stay for up to a year.

Note: The national language is Georgian, but English and Russian are also both widely spoken, so you won’t have difficulty communicating, especially in Tbilisi and other tourist areas.

2016 Travel Photographer of the Year