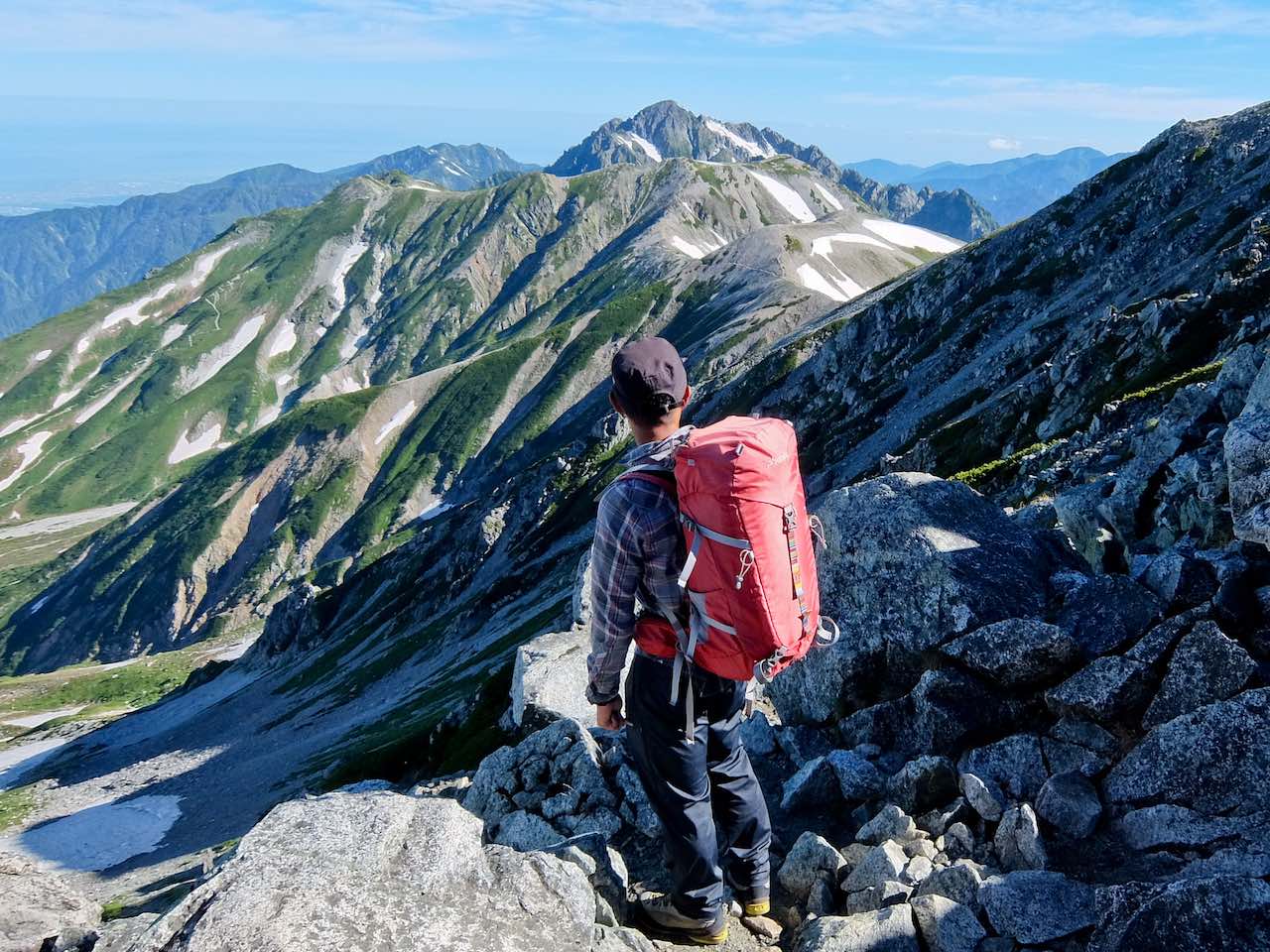 Tateyama is a small town on the edge of the Japanese Northern Alps and makes a great base to explore the mountains. It’s already on the map as the starting point for the Tateyama Kurobe Alpine Route – a journey which involves cable car, bus and ropeway. These were originally built to provide supplies for the Kurobe Dam but now are for tourists.

Unfortunately there’s no hiking involved, but there’s a much older route for pilgrims travelling on foot. From the 17th to the 19th centuries, Mt. Tateyama was designated as one of Japan’s three holy mountains along with Mt. Fuji and Mt. Hakusan. It helped, of course, that are plenty of hot springs and sulphurous fumes coming out of the ground in the area.

Jigokudani, or Hell Valley, at the foot of the mountain, is the centre of all this activity. Pilgrims, arriving here, imagined the hot springs were the gateway to the underworld and of course the stink of sulphur helped.

Since you had to walk through here to get to the summit of Mt. Tateyama, the pilgrimage symbolically represented a journey from hell to heaven. At the top, a Shinto shrine was built, where pilgrims would receive a blessing from the monks, and see it as a free ticket to the afterlife. 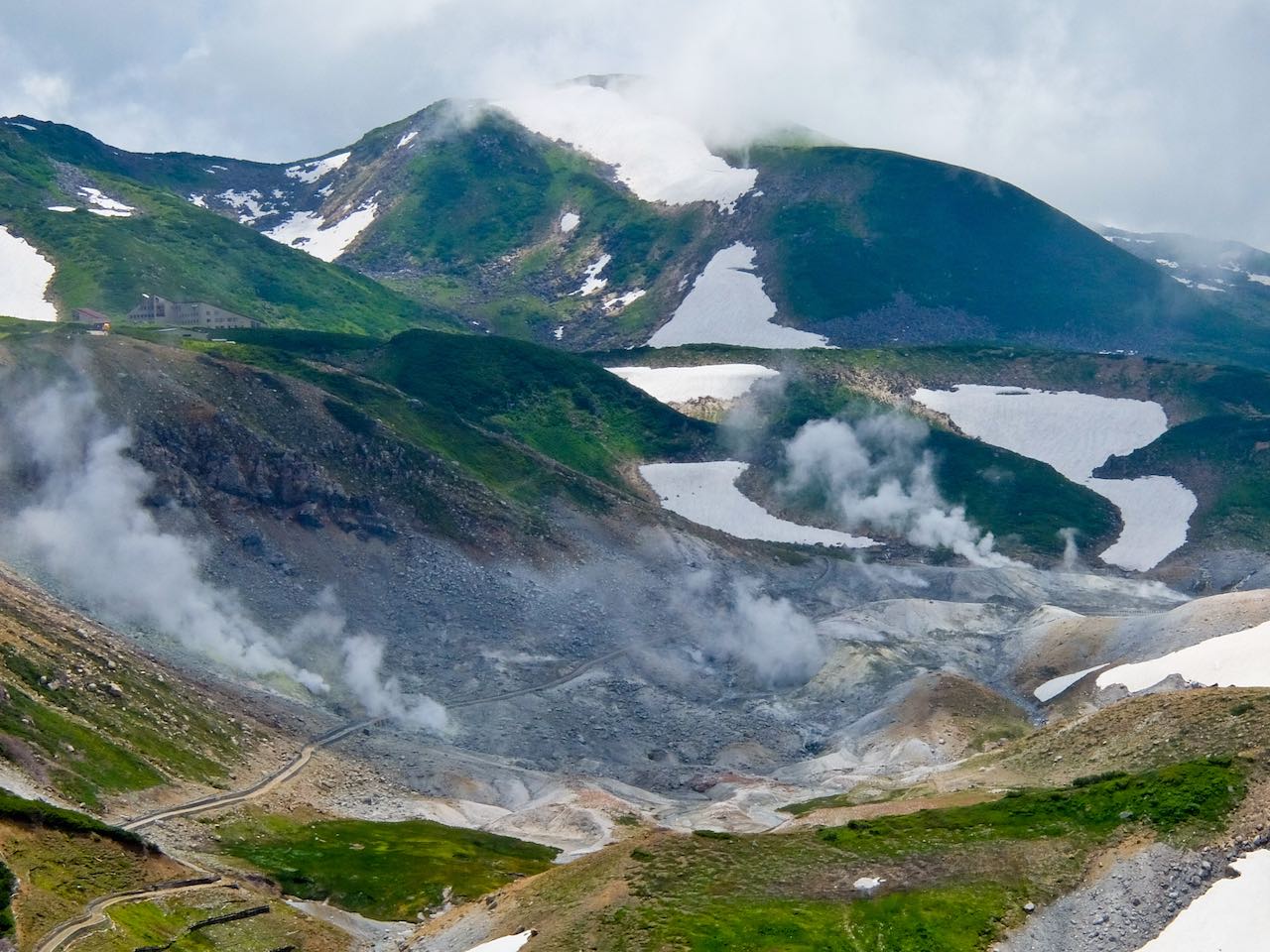 I visited the region last year for the Nunobashi Kanjoe Festival and am familiar with the sacred mountain but I want to explore further.

There’s a horseshoe walk starting and ending in Tateyama, taking 3-4 days, passing the Shomyo Falls, the tallest waterfall in Japan. Unfortunately, I’m slightly pressed for time so take a cable car from Tateyama station up to Bijodaira, saving a few hours of hiking. In Japan trails are well marked and maintained and I have no problem finding my way. 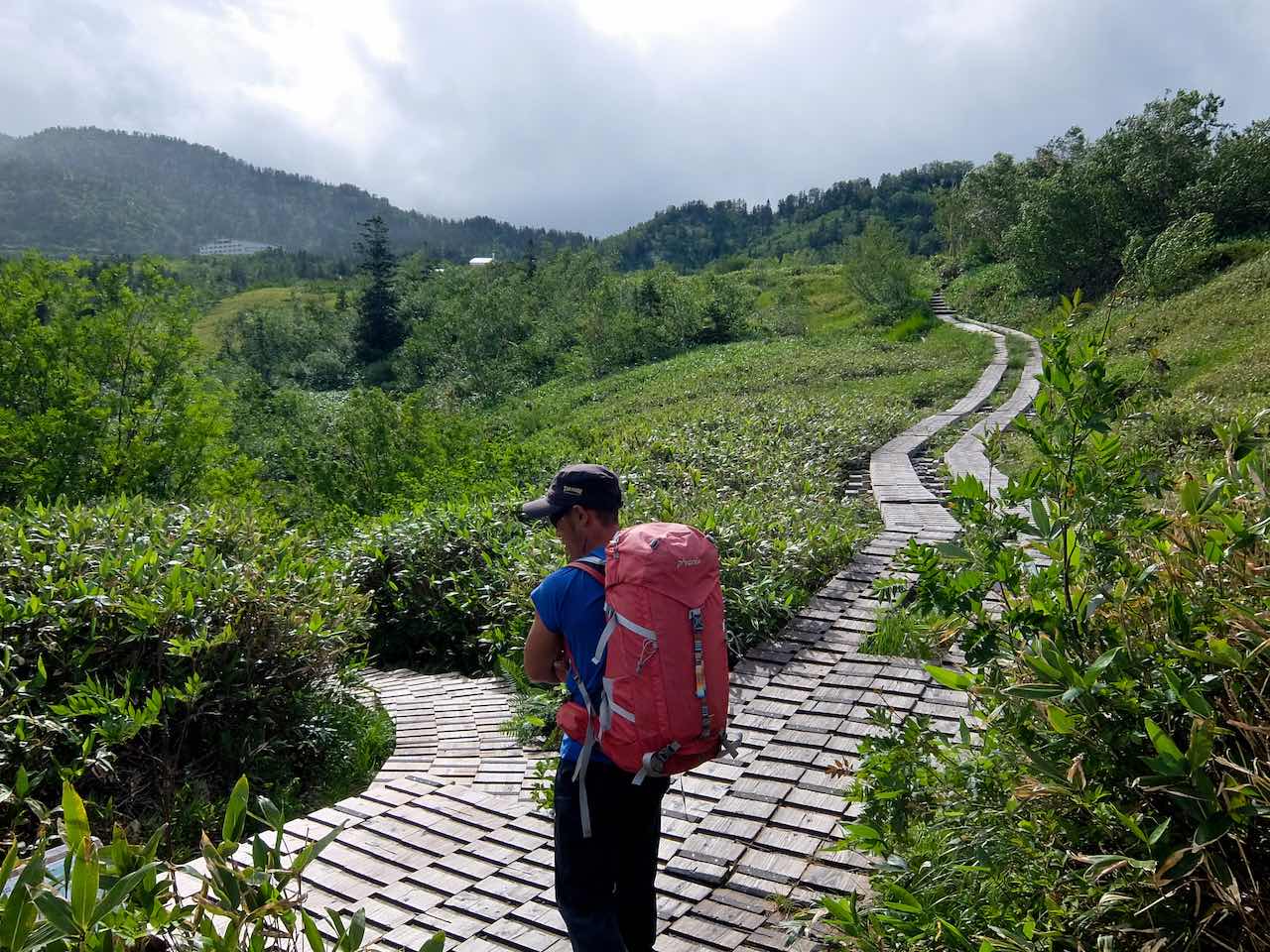 From Midagahara the boarded pathway takes me across wetlands before plunging down to a stream. From here it’s a steep climb up, but chains are provided to prevent sliding down the slope. It’s also extremely windy, a result of the passing typhoon, but I make it to the Tateyama Murodo hut at 2450m by early afternoon. The building is modern, but next to it is a wooden structure, erected around 300 years ago, the oldest mountain hut in Japan. 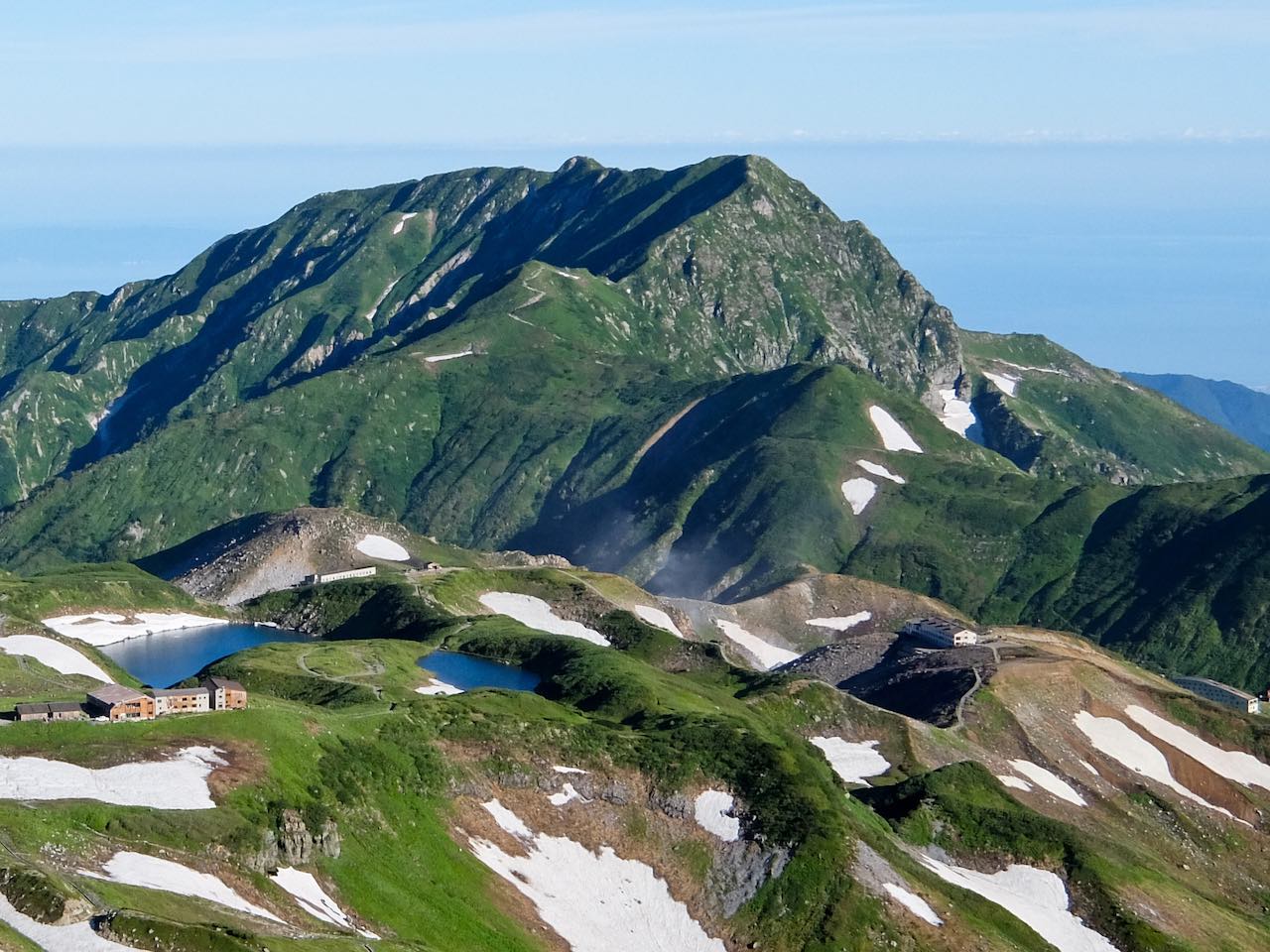 I’m now close to Hell Valley, and the threat from the sulphurous fumes is enough to warrant toxicity warnings on the hut’s notice board.

Just nearby is the Mikurigaike Crater Lake, whose cobalt blue stillness mirrors a beautiful image of the sacred mountain. In former times, the water in the lake, known as “a kitchen pond for god” was used to cook food offerings for the mountain gods. 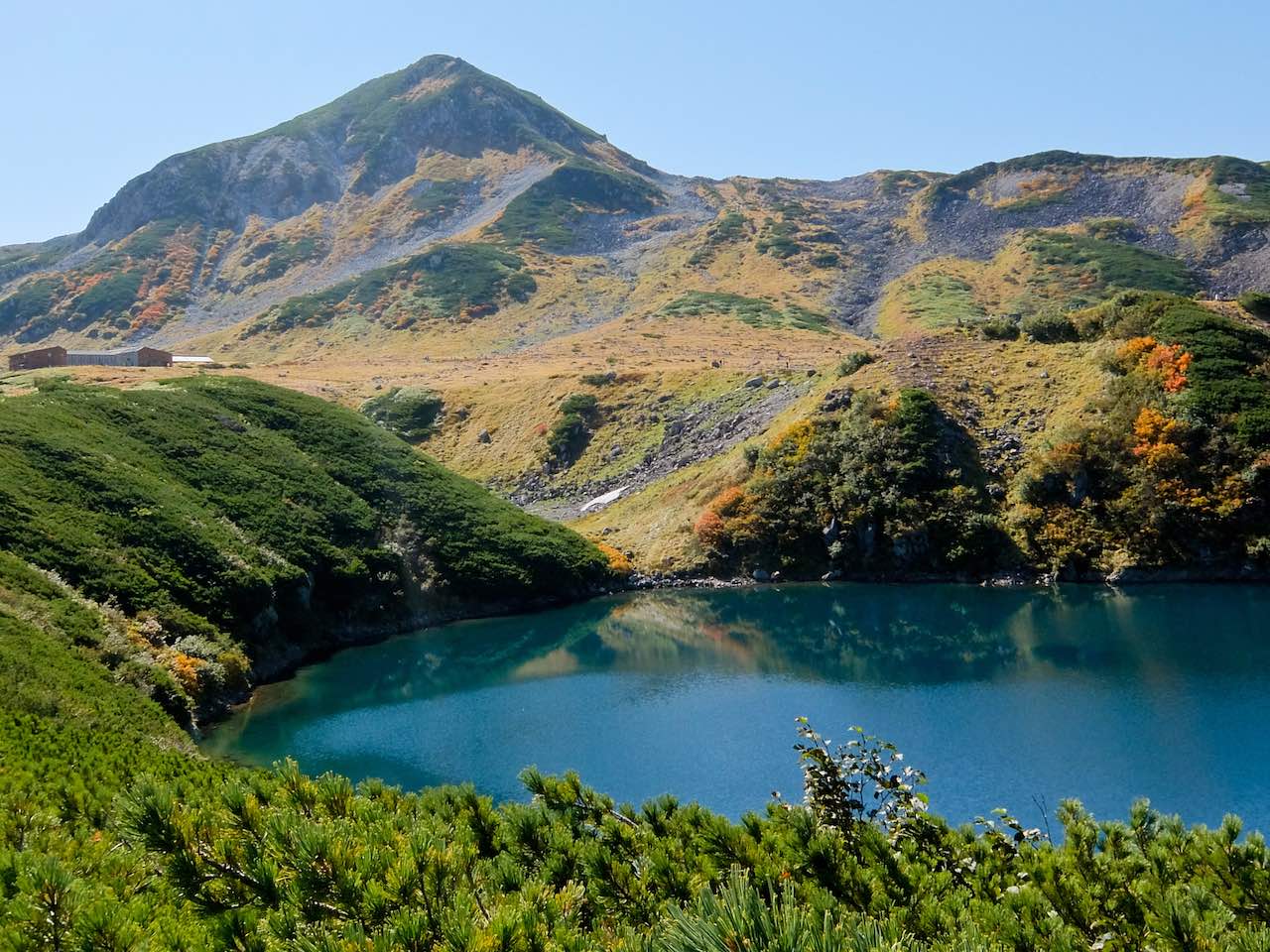 Next morning I’m up at dawn, partly because I want to avoid an entire army of children who are on a school trip to the shrine at the top of the mountain. Even though it’s late July, patchy snowfields make the going tricky although there’s a paved path up to the half way stage.

After this, it’s a craggy stiff scramble to the summit. It’s so clear that I can make out the iconic shape of Mount Fuji, two hundred miles away.

The legend of Oyama

In front of me is the shrine of Oyama where legend says that an 8th century hunter pursued a wounded bear only to see it transform into a golden Buddha. The hunter became a priest so he could look after this sacred place and monks still live here, offering a blessing and a taste of sake to those who come to pray. 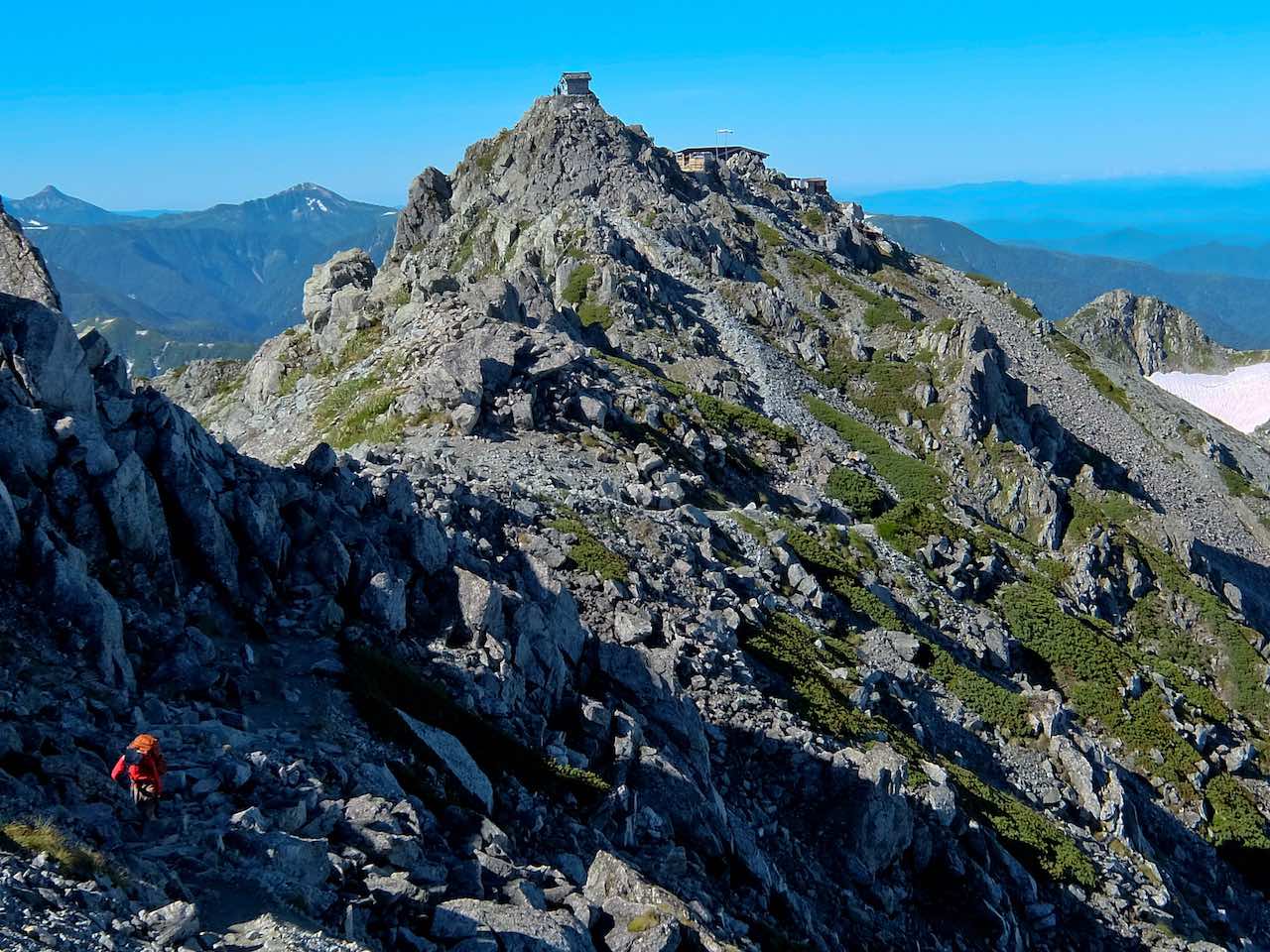 Tateyama actually has three summits, connected by a long ridge. The highest, Mt. Onanji, at 3015m, is just beyond the temple, and there’s a definite sense of achievement as I take in the wonderful views. Of course you’re never alone in Japan and the summit is no exception.

My fellow Japanese hikers are all wearing the latest outdoor gear, definitely overdressed in the heat. Of course everyone carries a small towel, obligatory to wipe the sweat off their brows. What I like about hiking here is that everyone is so polite, stopping to let you pass and always saying hello.

I follow the stony ridge climbing Mt. Masago, 2861m, and Mt. Bessan, 2399m, before descending to the Tsurugigozen mountain hut. I can see the turquoise crater lake and fumes rising from Jigokudani far down below.

From here I could carry on all the way back to Tateyama but time is too short. Instead I follow a twisting path which descends to the Rachiozawa campsite, on the banks of the river in Murodo.

I’m now definitely in Hell territory and there’s a strong smell of sulphur in the air. Unfortunately the access into Jigokudani or Hell is closed, due to high levels of the poisonous gases, but there are still good views into the valley along the trail. I pass the crater lakes and a number of pools of red water in the green wetlands. They are known as Chinoike, or blood ponds, although the colour comes from the high concentration of iron oxide in the water, rather than anything diabolical. 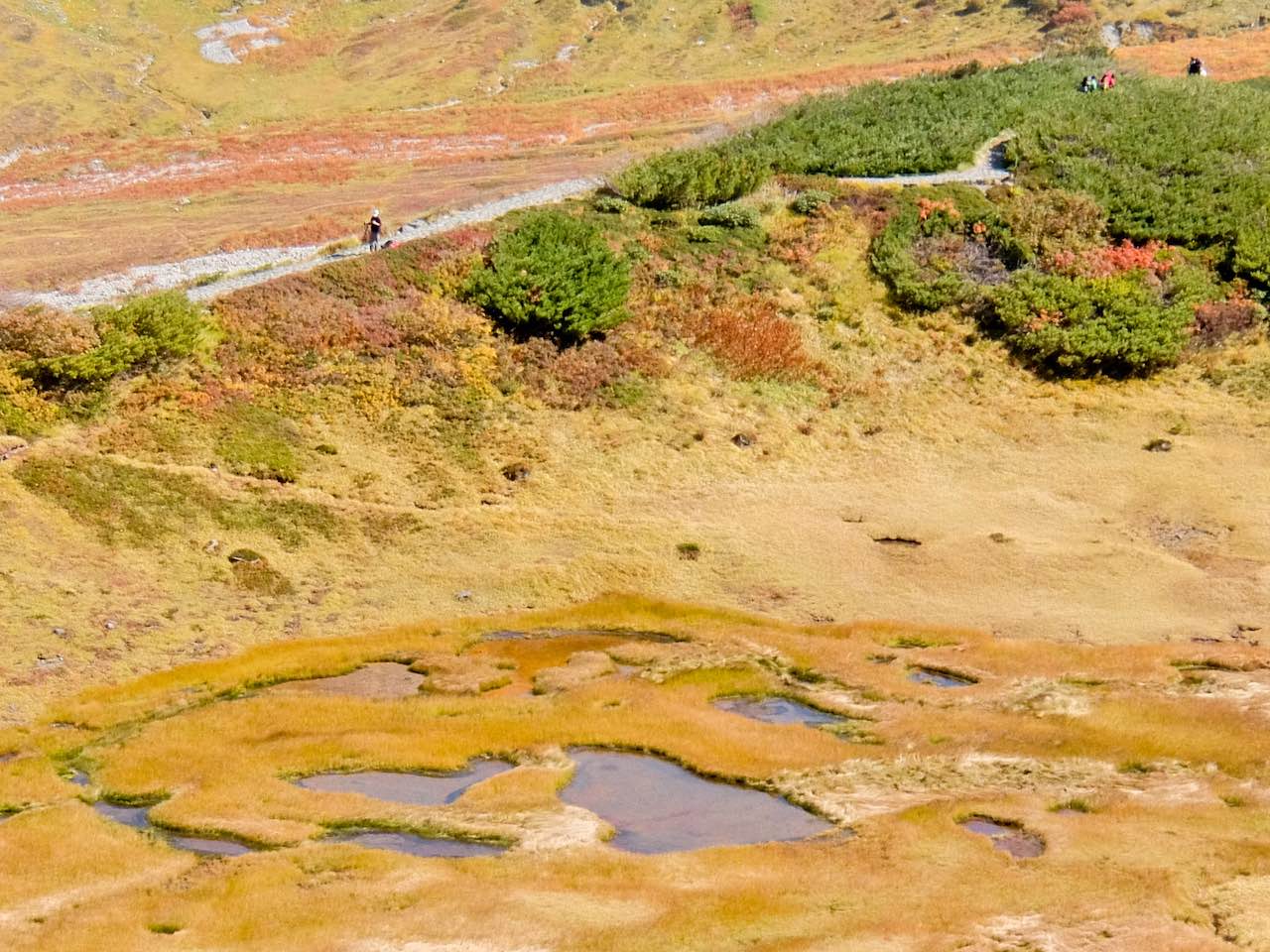 As I arrive back at Tateyama Murodo hut, the schoolkids are back from their pilgrimage and getting ready to take the transport down. They’ve been through hell and climbed the stairway to heaven. No wonder they seem so excitable – it’s been a trip of a lifetime.

GET THERE: British Airway flies direct to Tokyo from London Heathrow.

It’s a two hour bullet train ride from Tokyo to Toyama, then a 25 minute bus or taxi journey to Tateyama.

STAY: The Senjusou is a traditional Japanese hotel, with communal hot spring baths, by the Tateyama cable station.

NEED TO KNOW: The Tateyama Kurobe Alpine Route is open from May to November.  The horseshoe walking trail, starting and ending in Tateyama, takes 3-4 days and it’s wise to take a guide.

TIP: In autumn, from the end of September to late November, the foliage is absolutely stunning, the birch leaves, a vivid yellow, and the nanakamado bushes, fiery orange and red.

Tateyama has information about the town.