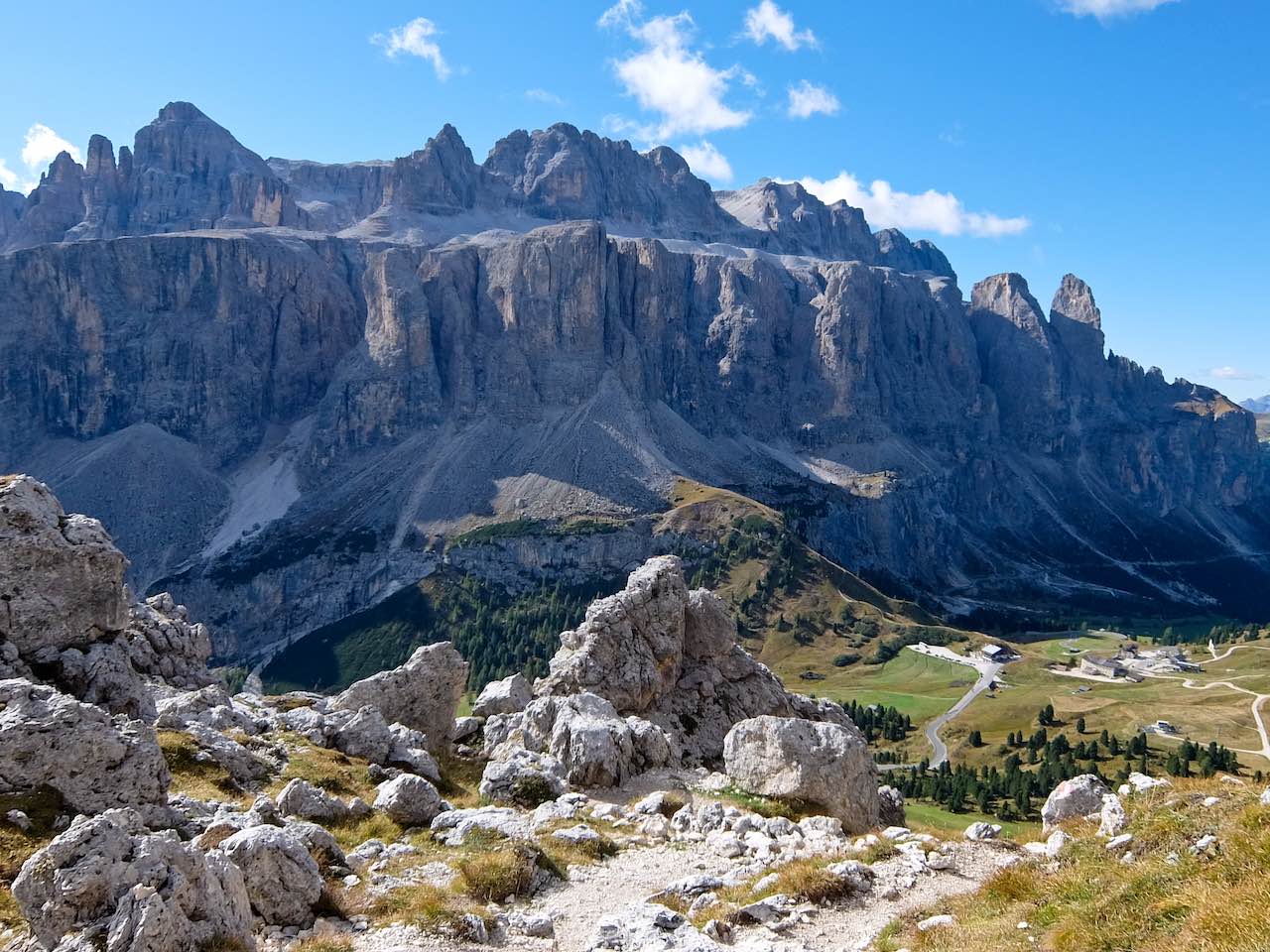 Lying in the north eastern corner of Italy, next to the border with Austria, the Dolomite mountains are a paradise for walkers, with views of their thrusting pale spires changing at every turn. A four day circuit, starting and ending in Ortisei, in Val Gardena, is a great taster for the Alta Via long distance trails that straddle the region. 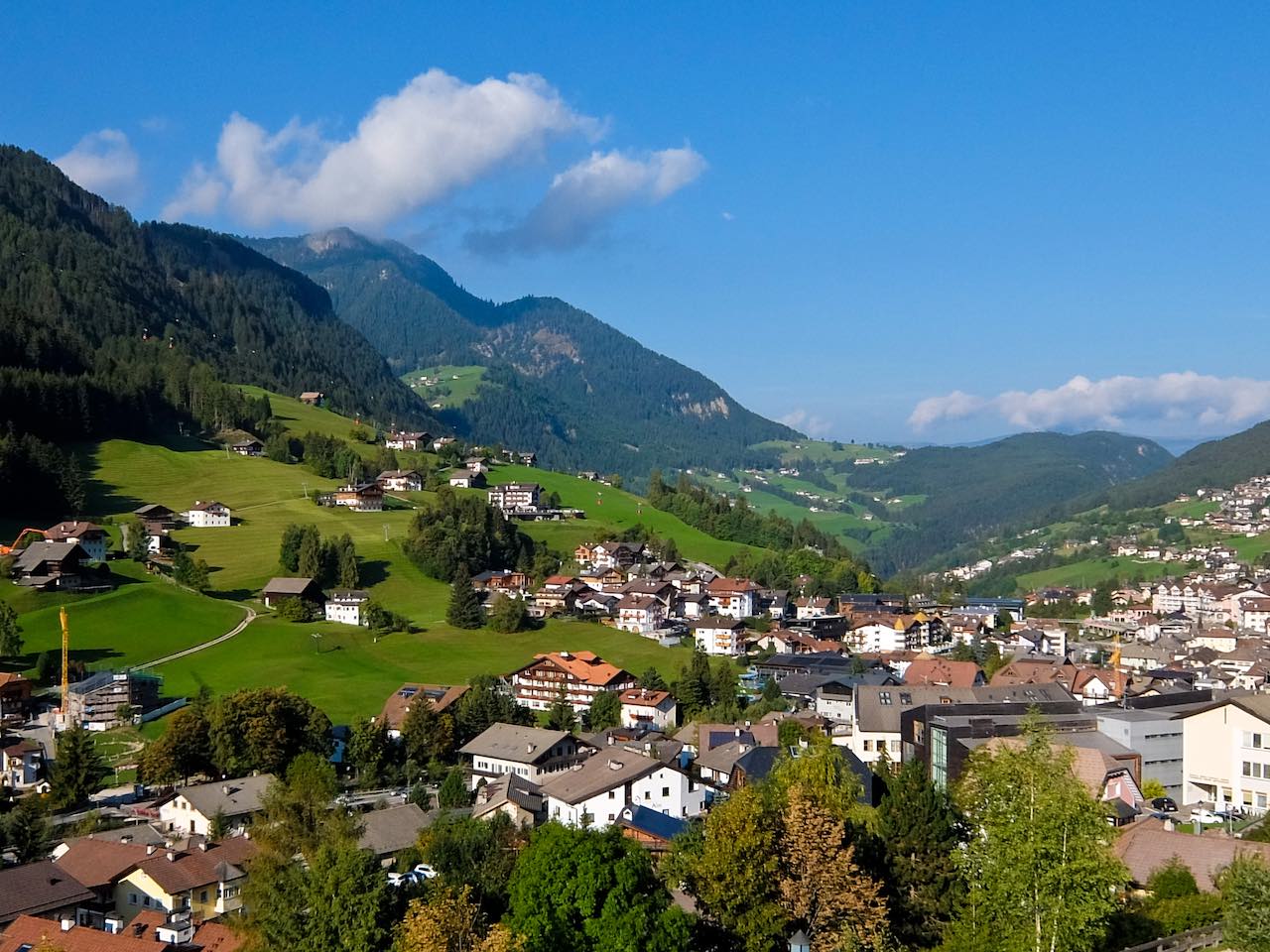 It’s no accident that I make my way to the mountains from Innsbruck in Austria, as this region, until the end of WW1, belonged to the Hapsburg Empire. Despite the efforts of Mussolini who pursued a policy of forced Italianisation, Sudtirol still feels very Austrian. German is widely spoken here and dumplings and goulash dominate the menus. Ortisei in Val Gardena is one of a handful of villages where the locals still speak Ladin, an ancient Latin language, and they’re fiercely proud of it.

I’m planning a four day circular hike, listed as “demanding” on the Val Gardena website and it says that it can only be done by “well trained hikers”. Bearing that in mind, I decide to spend a couple of days limbering up, with a pleasant one day hike, starting and ending with cable car transport and then a more demanding e-bike tour. I survive both and even have time to fit in a Sky Dinner, a novel multi-course meal served in the Mont Sëuc cable car as it goes up and down.

My route will take me to heights of over 2000m where there’s no hope of comfortable hotels. Instead I’ll be staying in rifugios, mountain huts where there’s only dormitory accommodation, and I’ll have to carry everything on my back. Previous experience prompts me to pack earplugs, a precaution against noisy snorers and I take the funicular up to Resciesa where I start my walk.

It’s a beautiful day, sunny and clear, as I cross the flat mountain pastures of Resciesa di Dentro to Rifugio Brogles. It’s too early to stop so I climb steeply up to the Forcella Pana, at 2447m, a narrow gap on the ridge above. At certain points there are cables to cling on to and iron rungs hammered into the rock face but, even with my fear of heights, there’s no problem here. 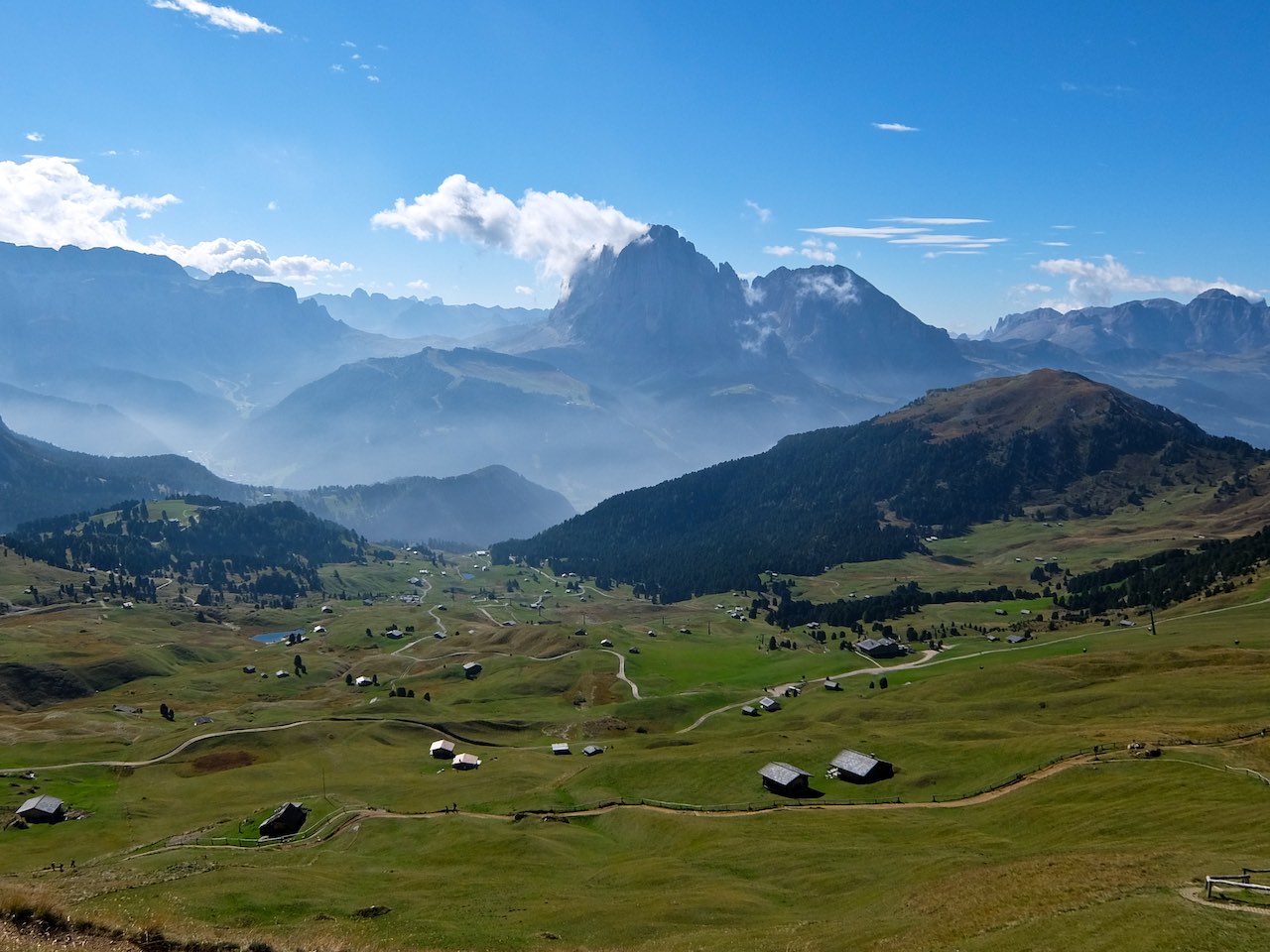 From the top I descend to green pastures, dotted with what they call gastronomic mountain huts, where day trippers are taking their lunch. I leave the last one, Rifugio Firenze, behind and enter a huge scree lined valley as I climb above the tree line. It’s hot and there’s no cover as I toil upwards to Forces de Siëles at 2505m. Here I meet Alta Via 2 which I will follow for a couple of days. Remarkably, even though it’s a Sunday I meet few people and I’m soon descending to Rifugio Puez at 2475m, my overnight stop. 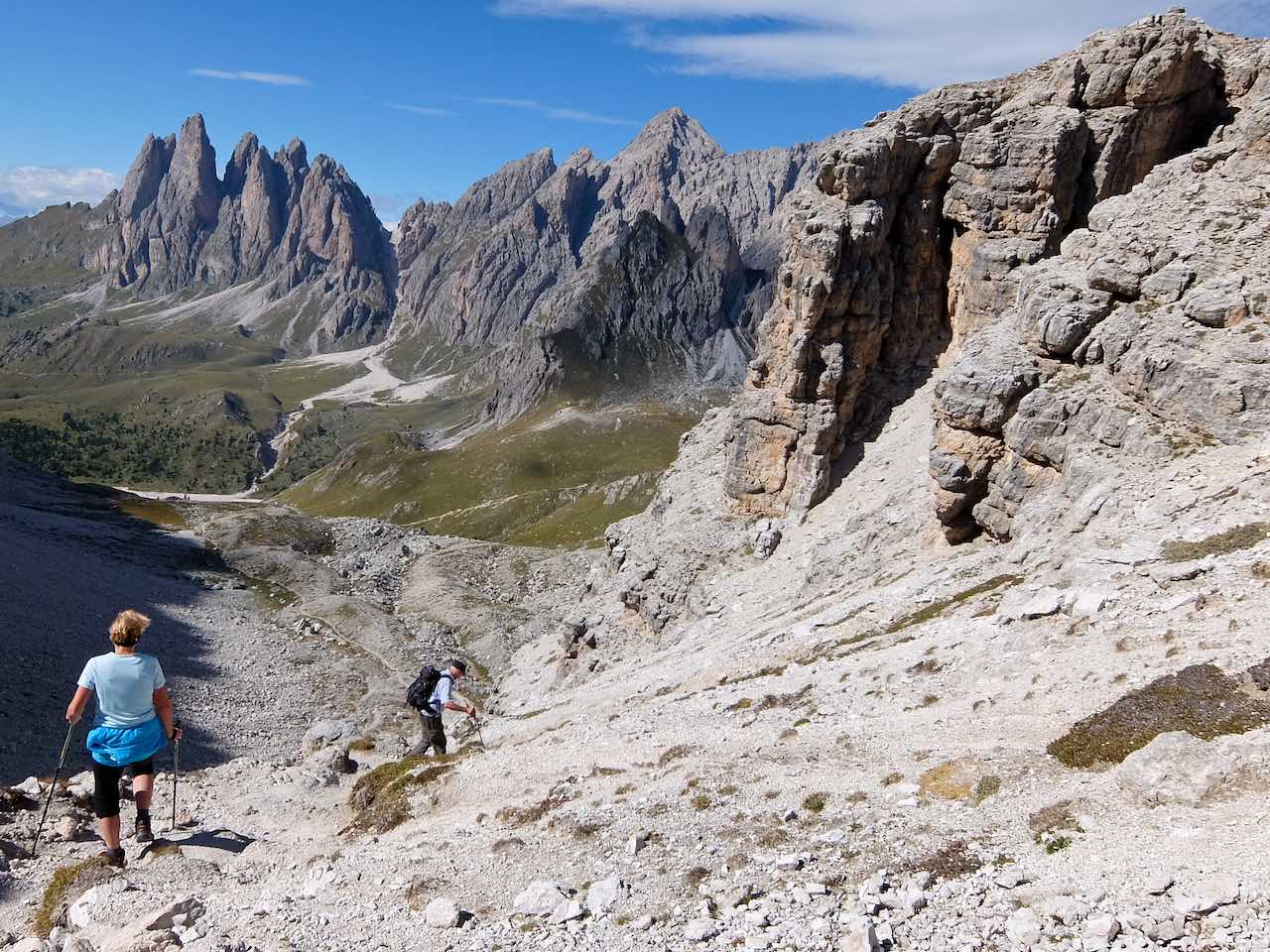 Customer service is rather brusque here but the food is filling and I meet a couple of English girls who’ve just arrived from Venice. Unfortunately my dormitory is stacked with snorers who even manage to penetrate my earplugs and I have a fitful night’s sleep. It’s not helped by a torrential downpour in the middle of the night but next morning it dawns bright and clear.

It’s slightly chilly as I take a level stony path before descending to a short gully, then pass Lake Crespëina on my climb up to a couple of wind gaps, Forcella Crespëina and Passo Cir. It’s a sharp downhill from here to Passo Gardena at 2137m, dominated by the awesome Sella massif. This is tourist central, crammed with coaches, motor bikes and cars where they charge you a euro to use the toilet. A biting cold wind whistles up the valley and I get out away from the pass as quickly as I can. 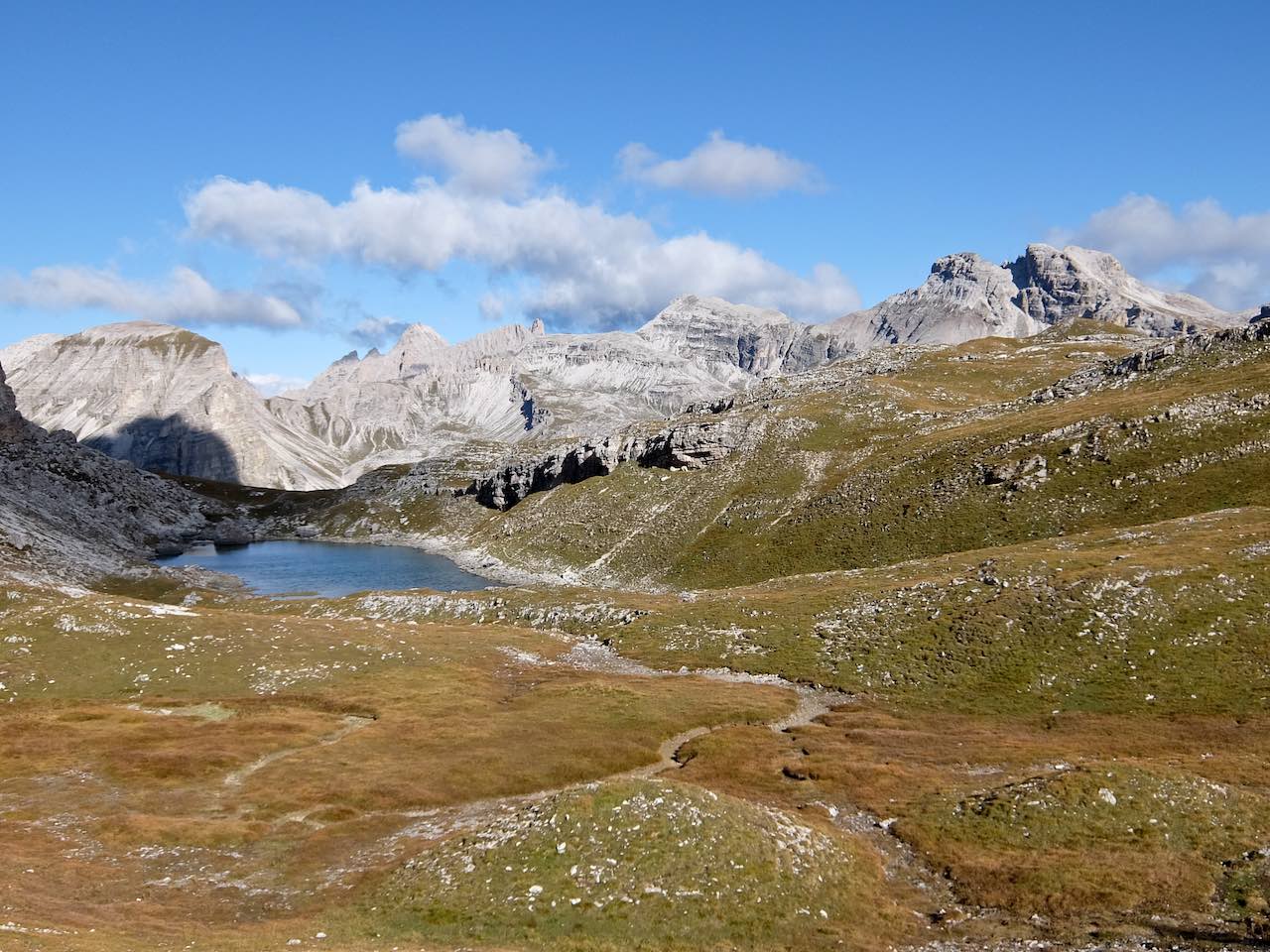 Ahead of me looks like an impenetrable wall of rock, but I skirt soaring cliffs and then turn right into the wild Val Setus – this is a ravine of scree and rubble which gets narrower as I climb. I’d been warned that this was going to be tough and soon I’m clinging onto cables, using iron rung toeholds and generally fretting for my life. Part of the problem is that I’ve left my gloves behind and the metal makes my fingers freeze. 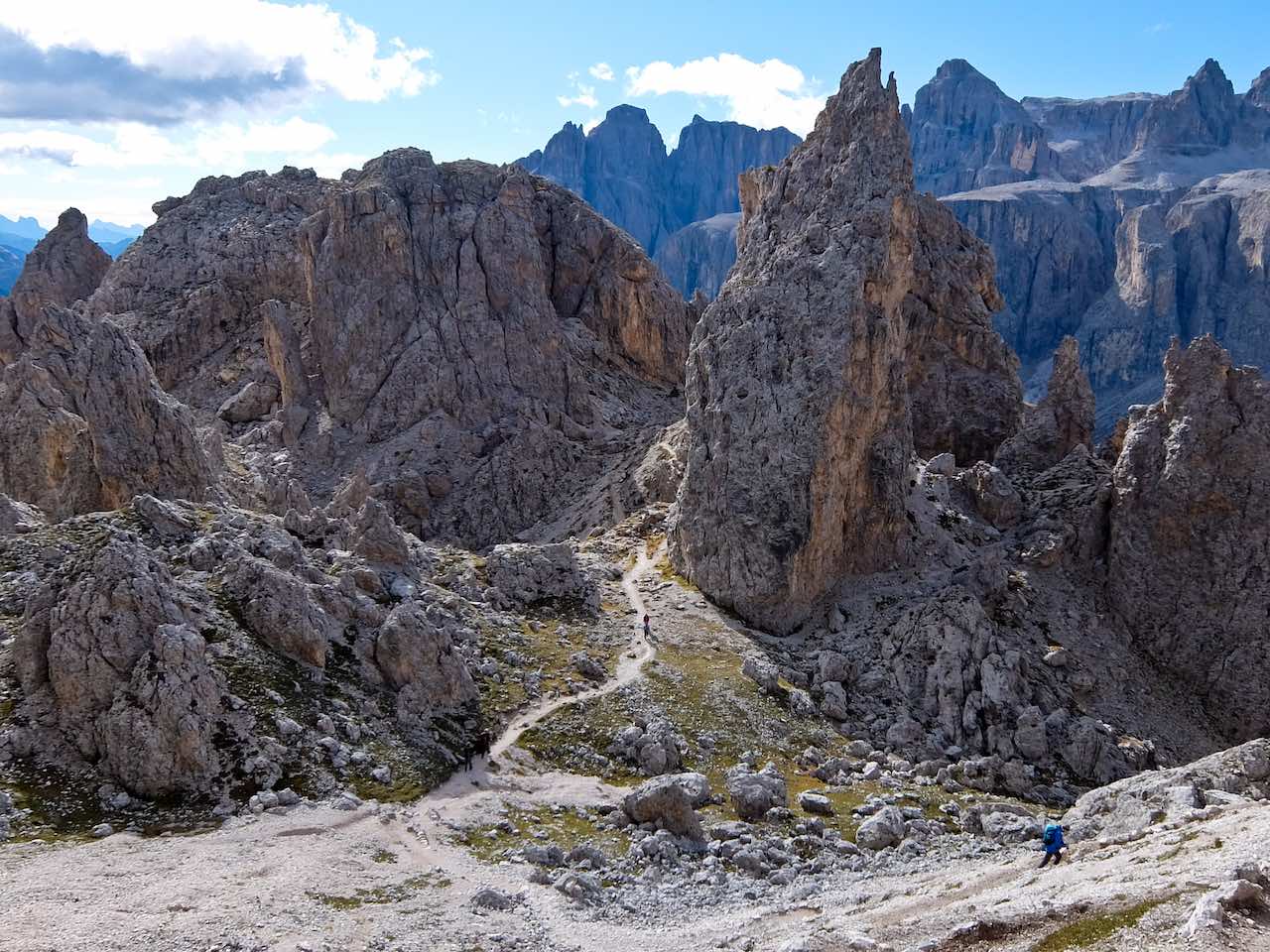 It’s a great relief to emerge on a spectacular 2610m terrace, beneath Sass da Lech, and I pause to enjoy the spectacular views. Now I realise I’m only ten minutes away from Rifugio Pisciadù, my overnight stop, overlooking a glacial lake. Service couldn’t be more different from the previous mountain hut, with welcoming staff and excellent food. I even get a dormitory to myself as the only other guests are a couple who value their privacy.

There’s ice underfoot as I skirt the lake and then start to climb under the flank of Cima Pisciadu. I’m under the impression that I’ve put the difficult bits behind me but soon enough the cables are back again. One particular traverse across a vertical rock face makes me grit my teeth but there’s no going back. At 2900m the terrain levels out and there are sweeping views over the vast stone desert of Altipiano delle Meisules. There’s a long descent along the Val Lasties, apparently the haunt of witches, before following a fragrant path through pine forest.

A tarmac ribbon of road below me has been evident for a while and my map tells me I have to follow it for a few kms to Passo Sella. I don’t like road walking at the best of times and there’s some sort of rally going on, with noisy sports cars zipping past me. Fortunately I manage to find a rough track veering off into the forest, which seems to be going in the right direction. It climbs above the road, away from the cars, and, although it’s not signed, leads me to the pass, another place filled with souvenir shops and expensive cafes. 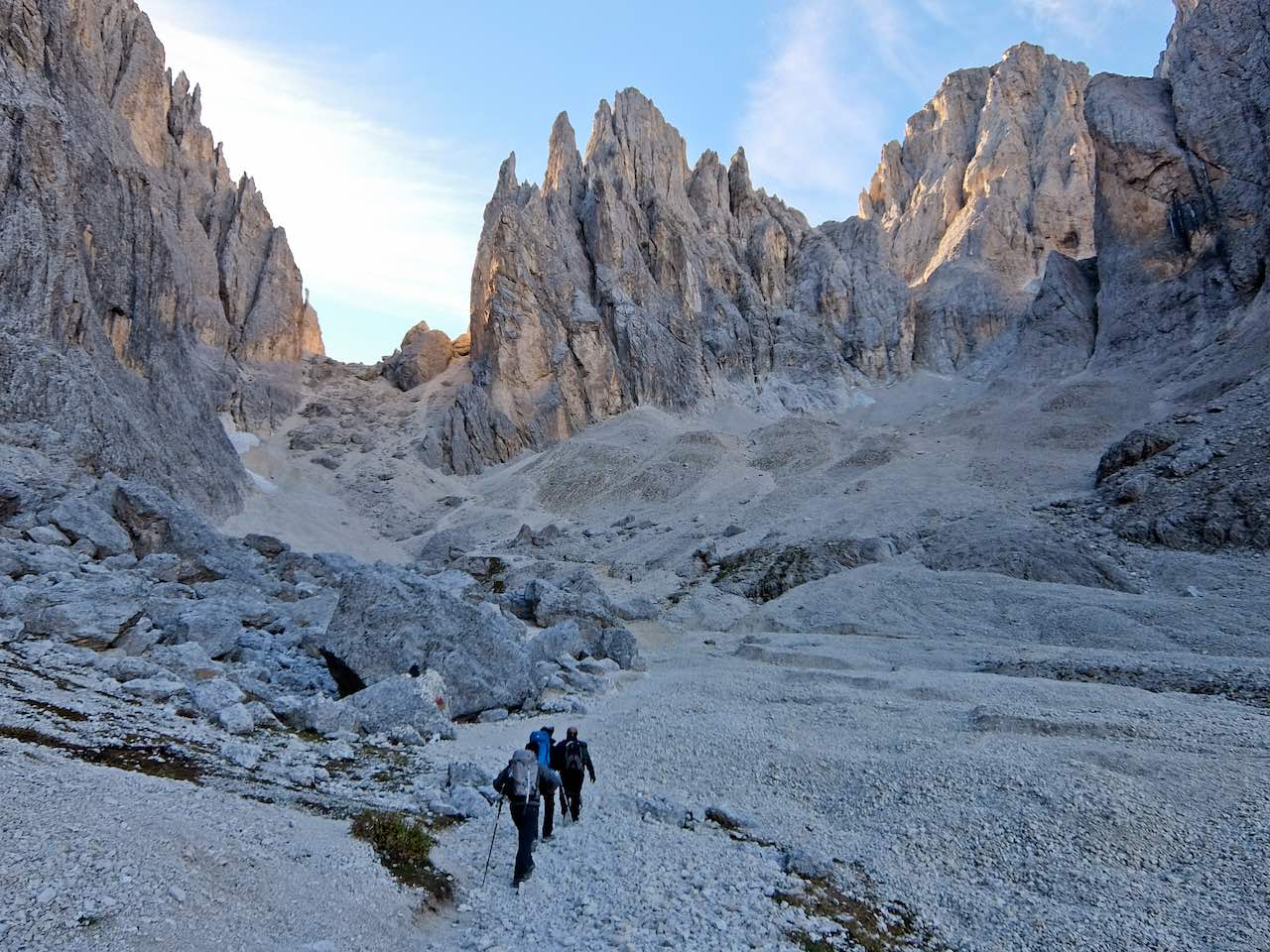 From here I can’t avoid the tarmac but it’s only around ten minutes downhill before I reach the Forcella del Sassolungo. From here there are glorious views of Mount Sassolungo, at 3181 m, the highest peak, and I take a steep cable car ride up to my day’s destination, Rifugio Toni Demetz. Apparently Toni was a mountain guide killed by a lightning strike in 1954 so his father decided to build a refuge. His younger brother, Enrico, still runs the hut and is the perfect host.

I wake early hoping to catch the sunrise, but it’s hidden behind the mountains. Still the flaming glow that illuminates the surrounding craggy peaks is worth getting up for.  I say my goodbyes to Enrico Demetz and he gives me chocolate for the road. It’s a steep descent on a scree covered path and I follow a regimented group of German walkers though a magnificent amphitheatre down past the Rifugio Sasso Piatto and then into the forest to the Zallinger hut at 2037 m. 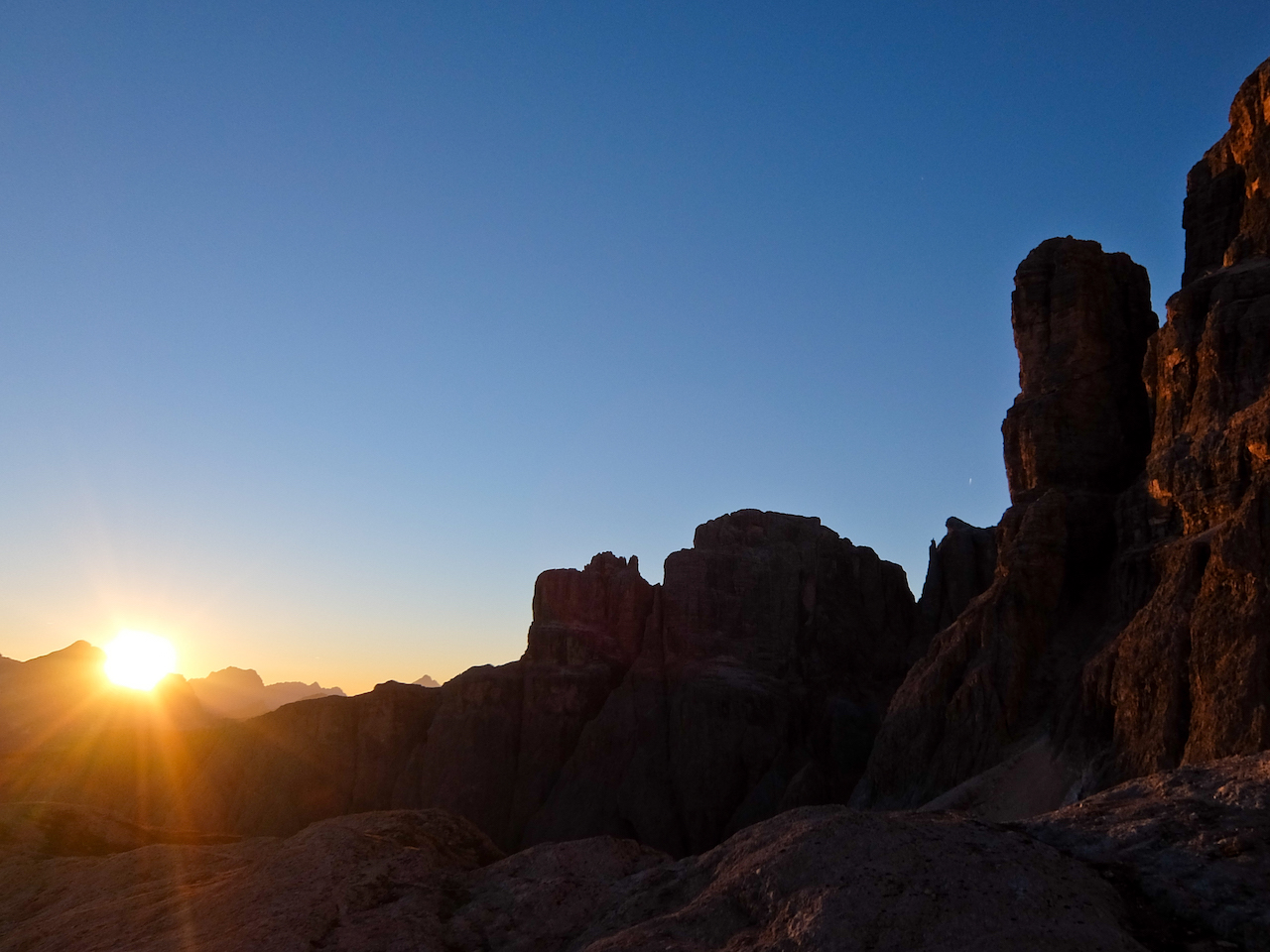 As I cross the Alpe de Suisi plateau I begin to get views of the Odle Group of mountains. I can make out the crags that I climbed on the first day and realise that I’ve almost come full circle. At Saltria, I’m almost back in civilisation, the walkers kitted out for a weekend ramble, and there’s even a bus stop. I press on across the pastures before finally climbing to the Mont Sëuc gondola station.  This is the scheduled end of my journey and it’s a pleasant descent back to Ortisei. 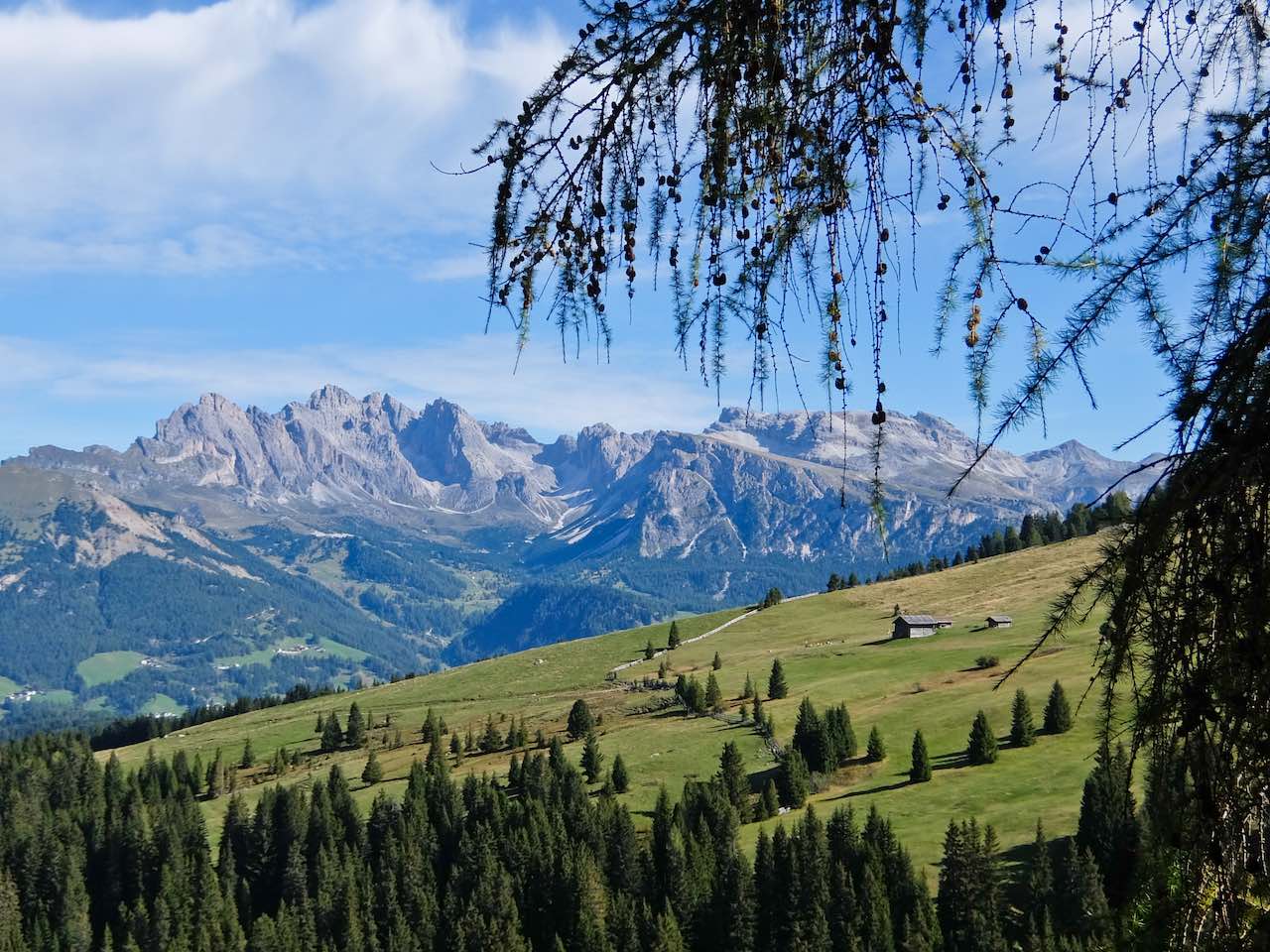 Walking in the Dolomites in good weather is a joy and the trails are well signed and well used so there’s no danger of getting lost. The Crown of Gardena is a magnificent circular walk, dominated by spiky peaks, sheer scree and towering cliffs with never a dull moment. The technical sections, with chains and steel rungs, shouldn’t worry most people, but there are alternatives if you suffer from vertigo. The most important piece of advice is to carry only the essentials, so you’re not loaded down. Nobody dresses for dinner in the mountain huts.

The four day, three night Crown of Gardena tour costs a maximum of 210€ per person including overnight stay with half board in the mountain huts. The route is self-guided and has to be booked directly with the huts. There’s an extra 22.70€ for the funicular to Resciesa and the Mont Sëuc cable car.

The 4* Wellness & Spa Hotel Alpenheim in Ortisei makes a comfortable base with good food. It also offers day hikes and mountain bike excursions.

The Gatwick Express is the quickest way to get from central London to Gatwick airport.

YOU MAY ALSO LIKE: Ski Guide: The Dolomites, South Tyrol (Alto Adige), Italy

Airport Etiquette: My top 12 behaviour bugbears at the airport