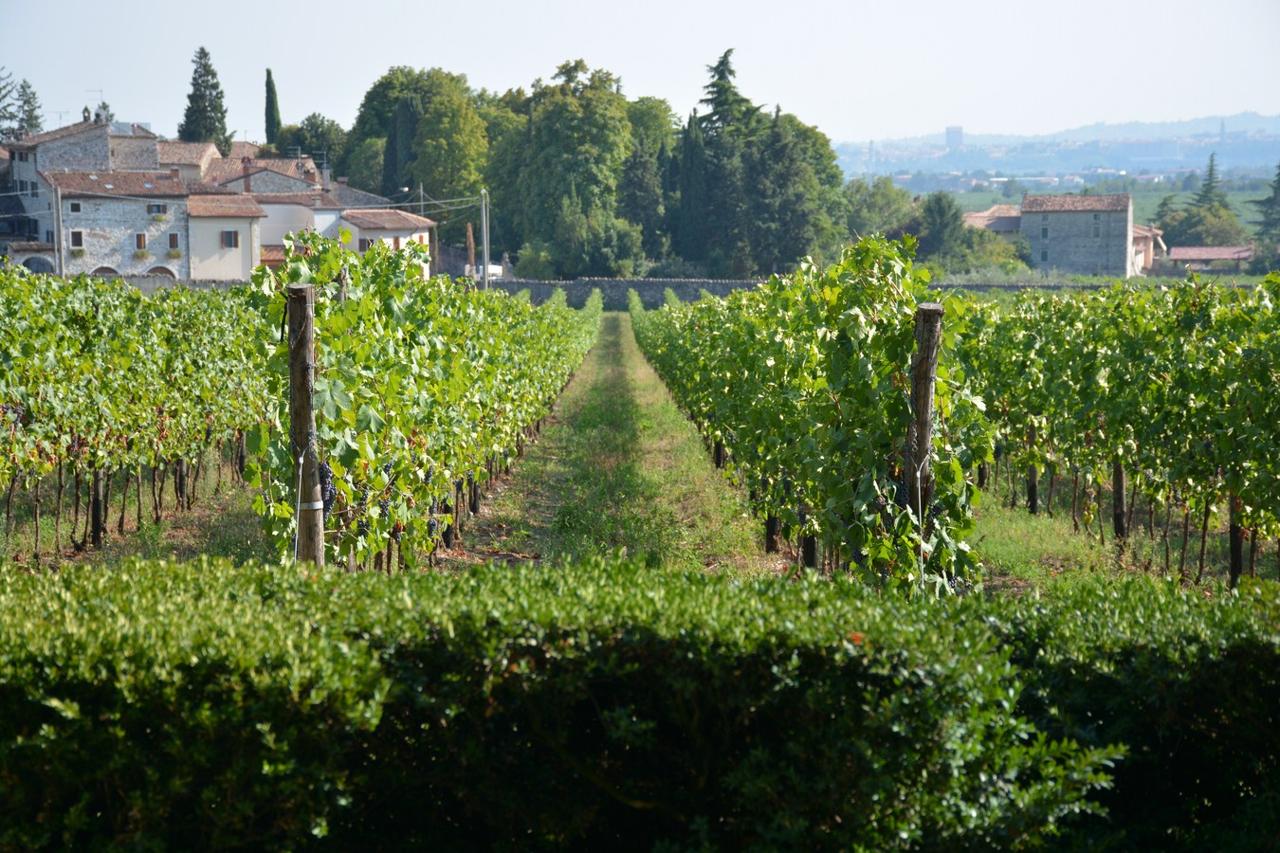 The Italian Job and numerous James Bond films have taught us that nowhere beats Italy for striking drives. Yes, the local standard of driving can sometimes be erratic, but there’s an undeniable romance to the Ferraris, Porches, and even the little Fiats zipping back and forth along a zig zag of mountain roads, their flashes of red or silver set against a jaw dropping backdrop.

With a week at my disposal and no desire to travel long haul, I flew from Gatwick to Verona and picked up a rental car. It wasn’t the soft top, sporty number I might have dreamed of, as my co-driver tends towards pragmatism and apparently high performance cars rarely have large boots. Google Maps was at the ready, and I’d lined up seven days of vineyards and cellar tours, churches and castles, and a stay in the Italian lakes.

The wine region of Valpolicella begins just a half hour from Verona’s airport, which made it the obvious first stop. 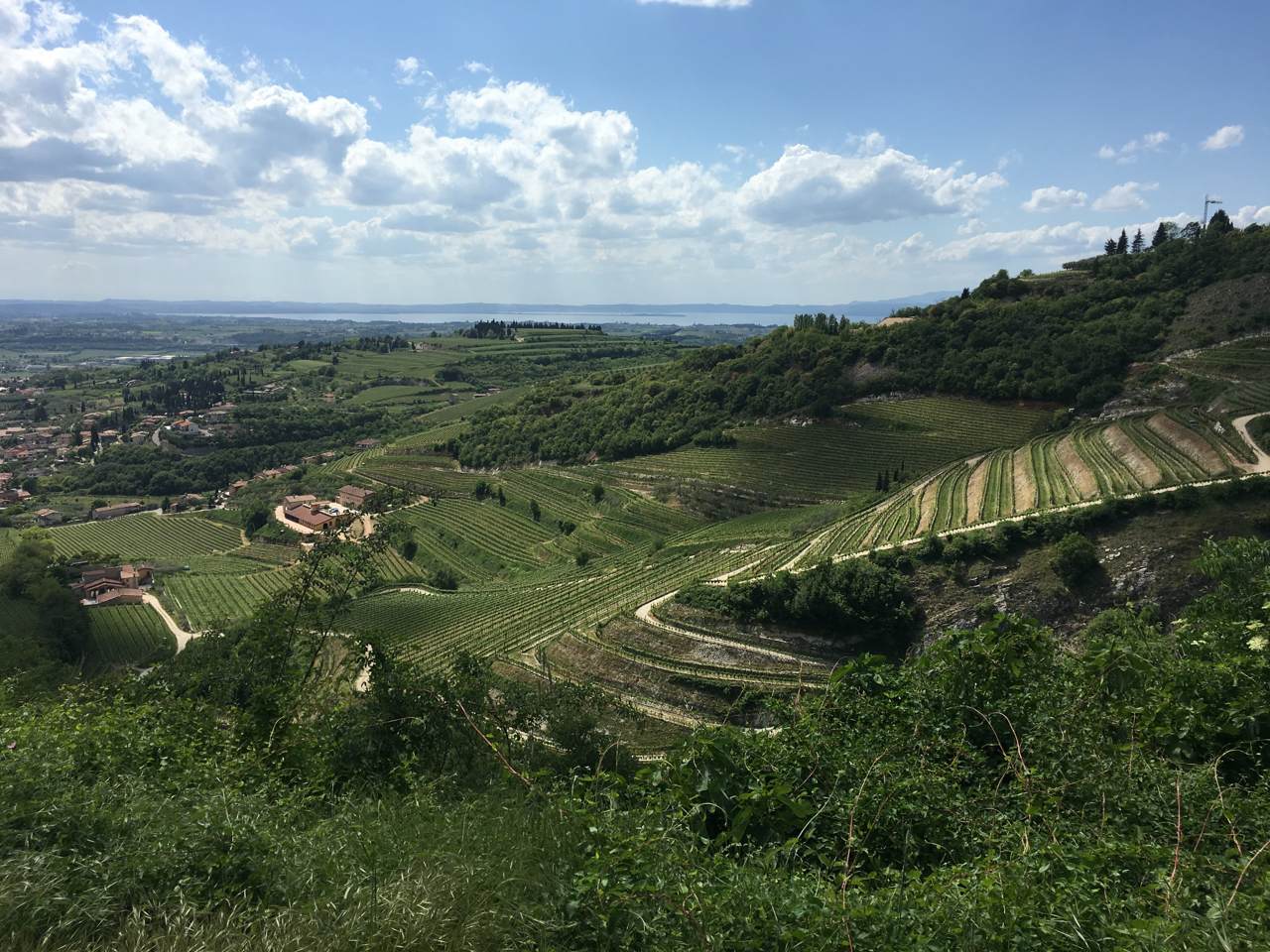 Everyone knows that drinking and driving don’t mix, so the best option is to stay on a vineyard and abandon your car for a while. Agri tourism is growing in Valpolicella as the winemakers have to diversify, and you can eat, drink, and stay on a number of idyllic farms.

La Fonte Degli Dei is just outside Negrar, which has one of the highest concentrations of vineyards and wine cellars in the region. You turn off the main road onto a track which winds its way between the vines and then slowly climbs the hillside to a position with commanding views. A single stone archway stands apart from the house and draws the eye from miles around.


This large farmhouse is Cristina’s home. In recent years, she and her husband have begun to welcome guests who want to enjoy the peace of the countryside. You can walk or mountain bike right from the door, and the various vineyards stretch as far as the eye can see. 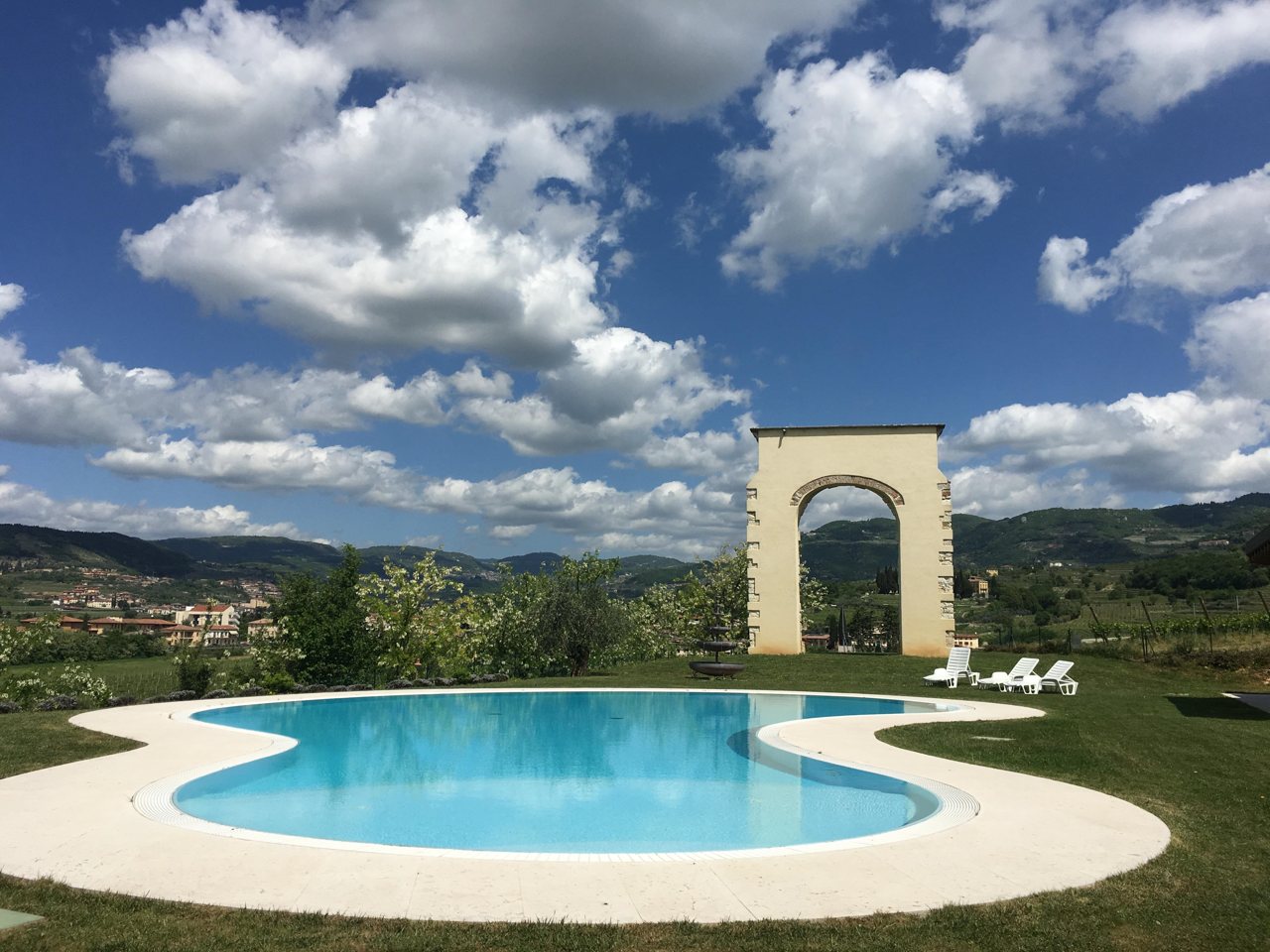 One afternoon I walked a little further and chanced upon the gardens at Villa Rizzardi. Laid out by designer Luigi Trezza in the 18th century, you can follow the garden trail between the various follies to the stone and box hedge amphitheatre, then stop for a glass of wine in the converted farm building which doubles as a bar and shop.

From Valpolicella to Lake Garda

The second stage of the road trip was across the mountains from Valpolicella to Lake Garda. As the crow flies, it hardly seems any distance at all, but the mountains are a formidable natural barrier and it is impossible to drive straight across them. Instead, the roads zig and zag their way up to the most accessible passes, then descend in a similarly convoluted fashion. Abandoned forts, plenty of medieval churches, and even an occasional waterfall dot the landscape, so every new twist and turn brings with it intriguing views.

A ring of attractive towns and villages, some larger than others, surrounds Lake Garda. Malcesine, on the eastern shore, is one of the more easily accessible destinations from Valpolicella, and it is just the right size to entertain you for a couple of days. 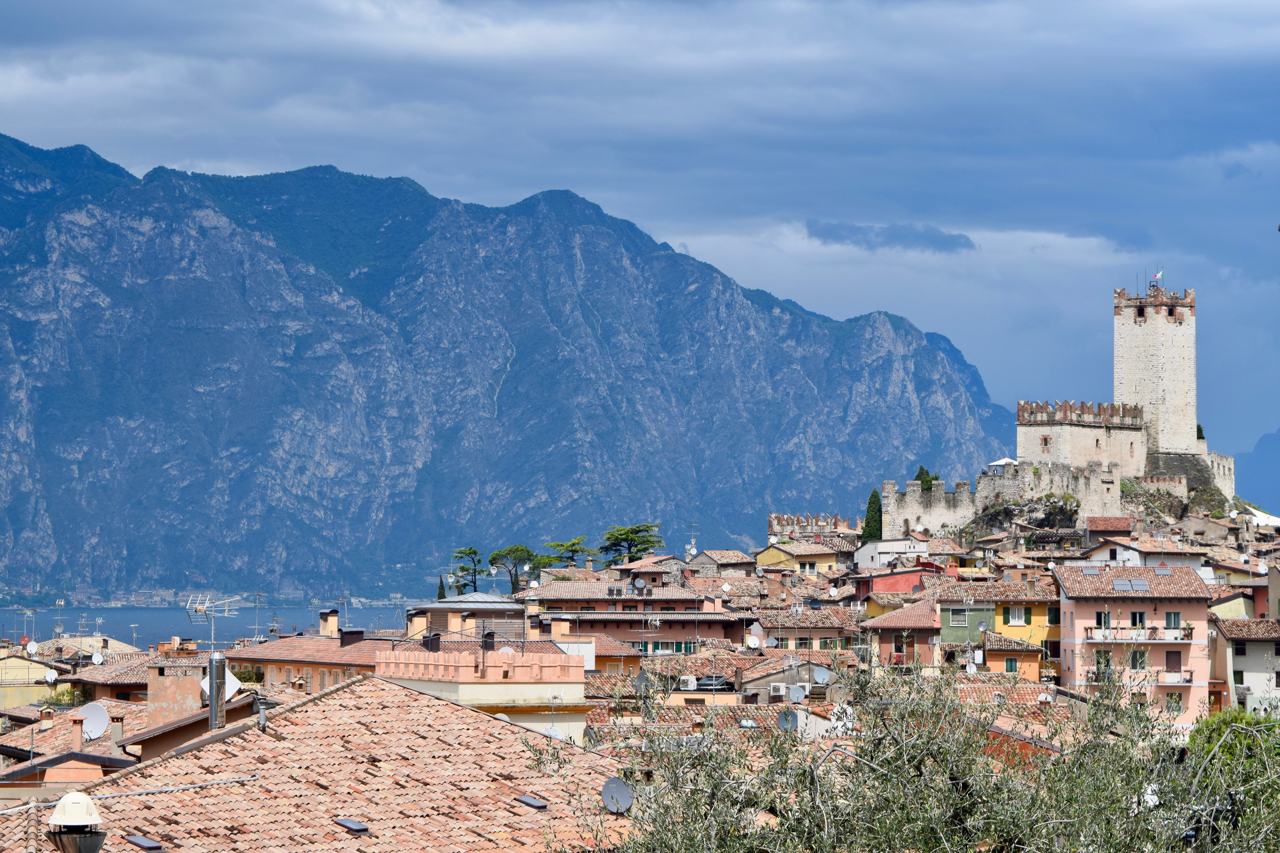 I stayed at Hotel Maximilian on the southern side of the town. It’s down a quiet road that terminates in a sheltered bay, so every room looks out on the water and the dozen or so boats moored close to the shore. The gardens run down to the lake, the numerous flowering trees creating a shady oasis. I cast off the tensions of the drive with a few lengths in the pool, followed by a rather more drawn out Aperol spritz on the terrace.


The visual centrepiece of Malcesine is its castle, which is nestled amidst a labyrinth of narrow streets. It rises up in many tiers, and though the winds from the lake can whistle sharply around the towers, it’s well worth climbing to the top to admire the views.

Making it up all those steps is hungry work. It’s just as well, then, that the very best restaurant on Lake Garda, Vecchia Malcesine, is only a few minutes’ walk away. Chef Leandro Luppi was born and bred here, and he is a passionate proponent of local ingredients and wines. His smoked lake fish pasta carbonara was a revelation — who knew how much better carbonara could be without bacon? — and each subsequent course came with a mouthwatering twist. 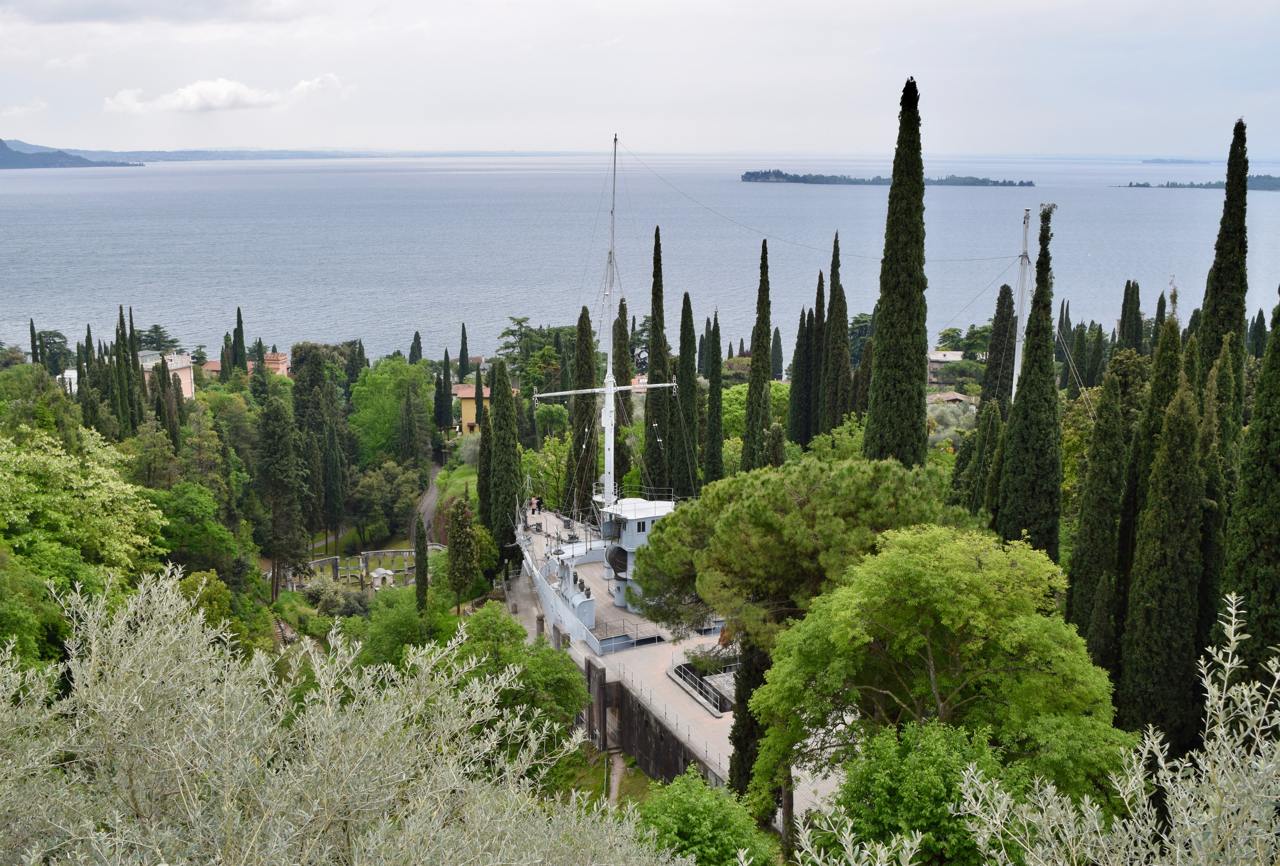 You can take the car on the ferry across the lake, or drive the slightly longer way around the shore. This excursions brings you to Il Vittoriale degli Italiani, an extensive and eccentric complex which includes the house of poet and soldier Gabriele D’Annunzio, numerous landscaped gardens, a mausoleum, and, rather fabulously, half a battleship wedged into the hill. Quite how they got it up there, I haven’t a clue, but it is certainly a dramatic centrepiece.

The final leg of the journey brought me back to Verona, but not to the city centre. On the hillside looking down on the city lights is an estate first given to the Bishop of Verona by a Barbarian sometime in the 8th century. Its name is Delser Manor. There was an active monastery here until the time of Napoleon, but only its cellars have survived.


It took 10 years to dig out the subterranean tunnels and to transform them into a one of a kind boutique hotel. A classical stone pillar — probably Roman — stands in the car park by the vines and olive trees and is a hint of what is to come inside.

Click on the image to enlarge. All photos © Sophie Ibbotson. 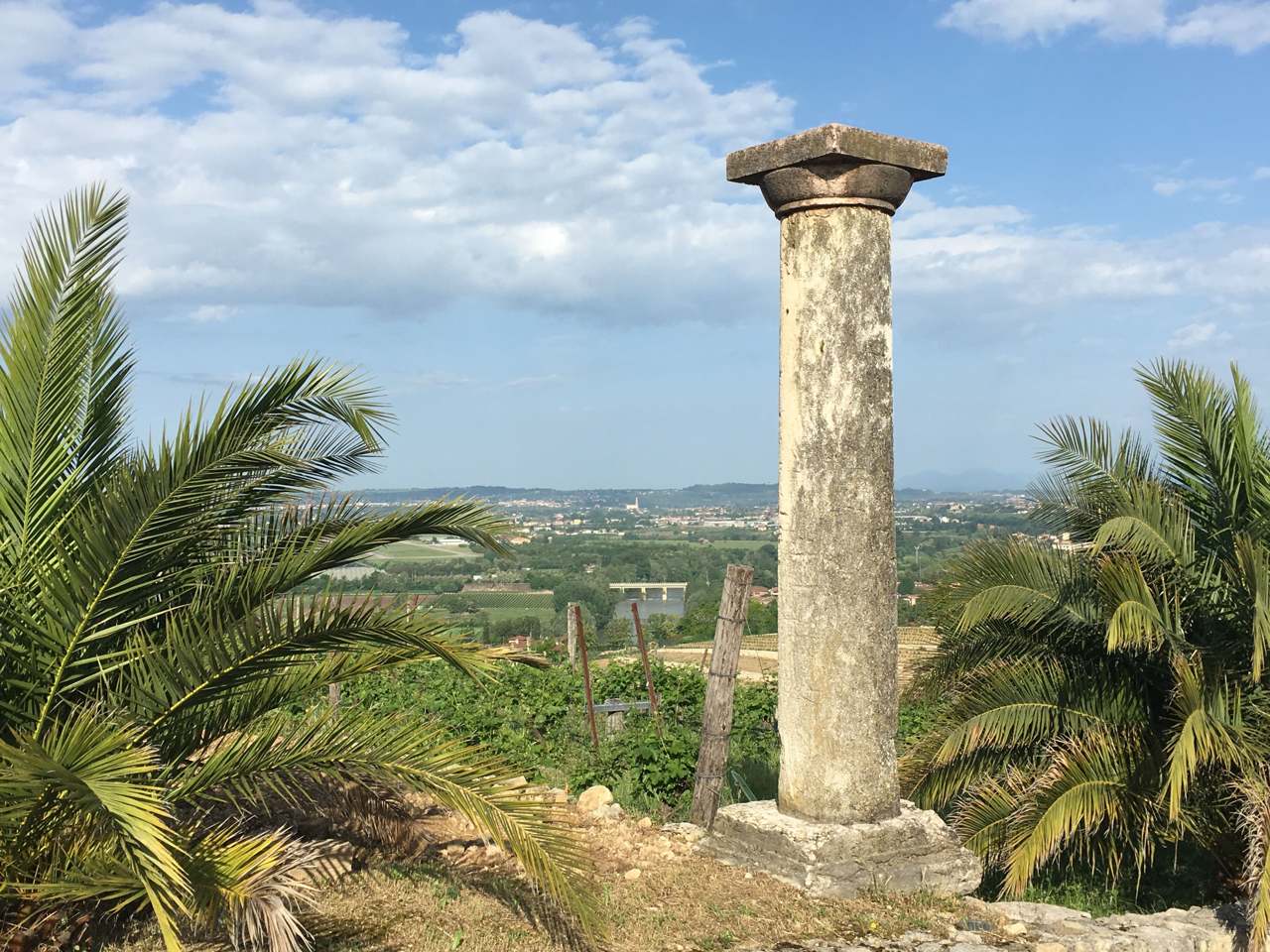 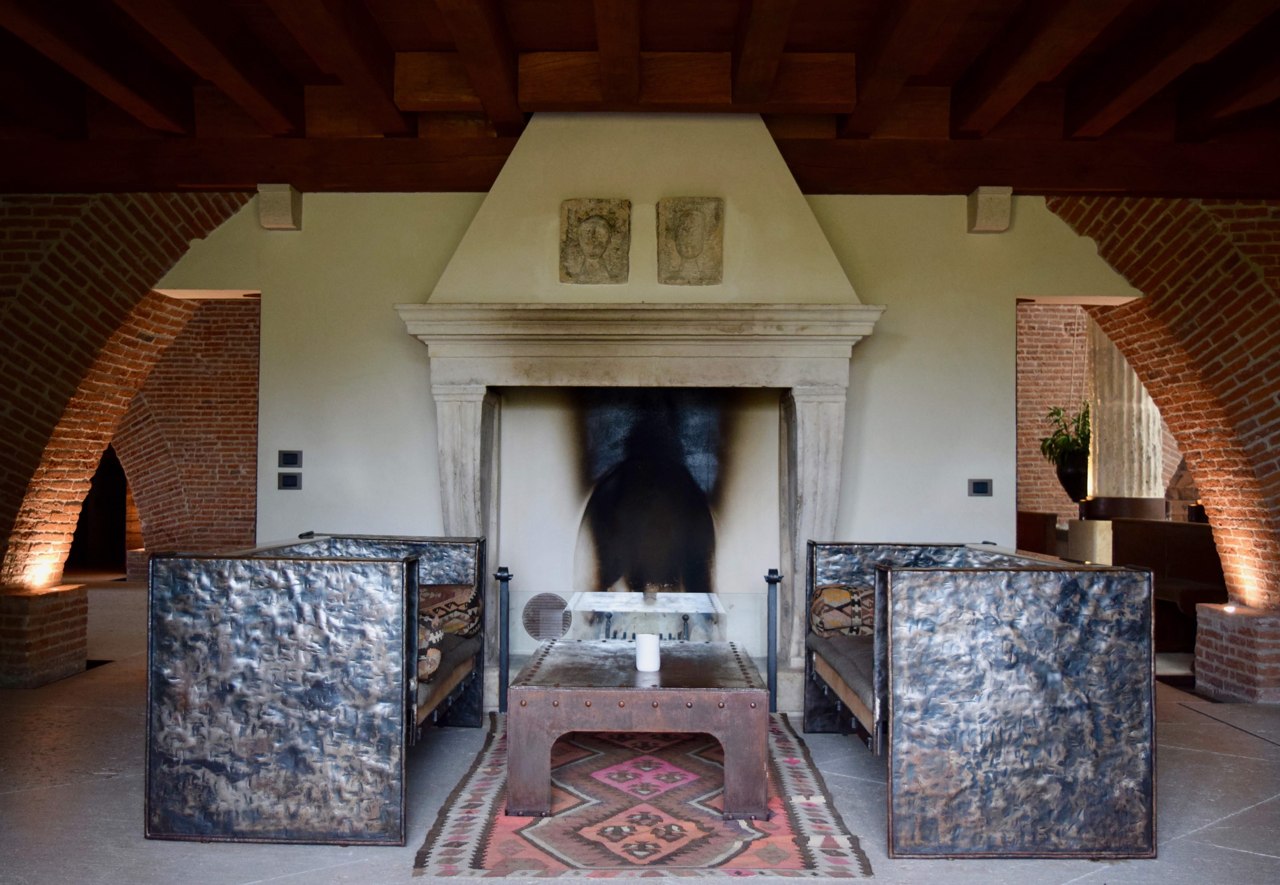 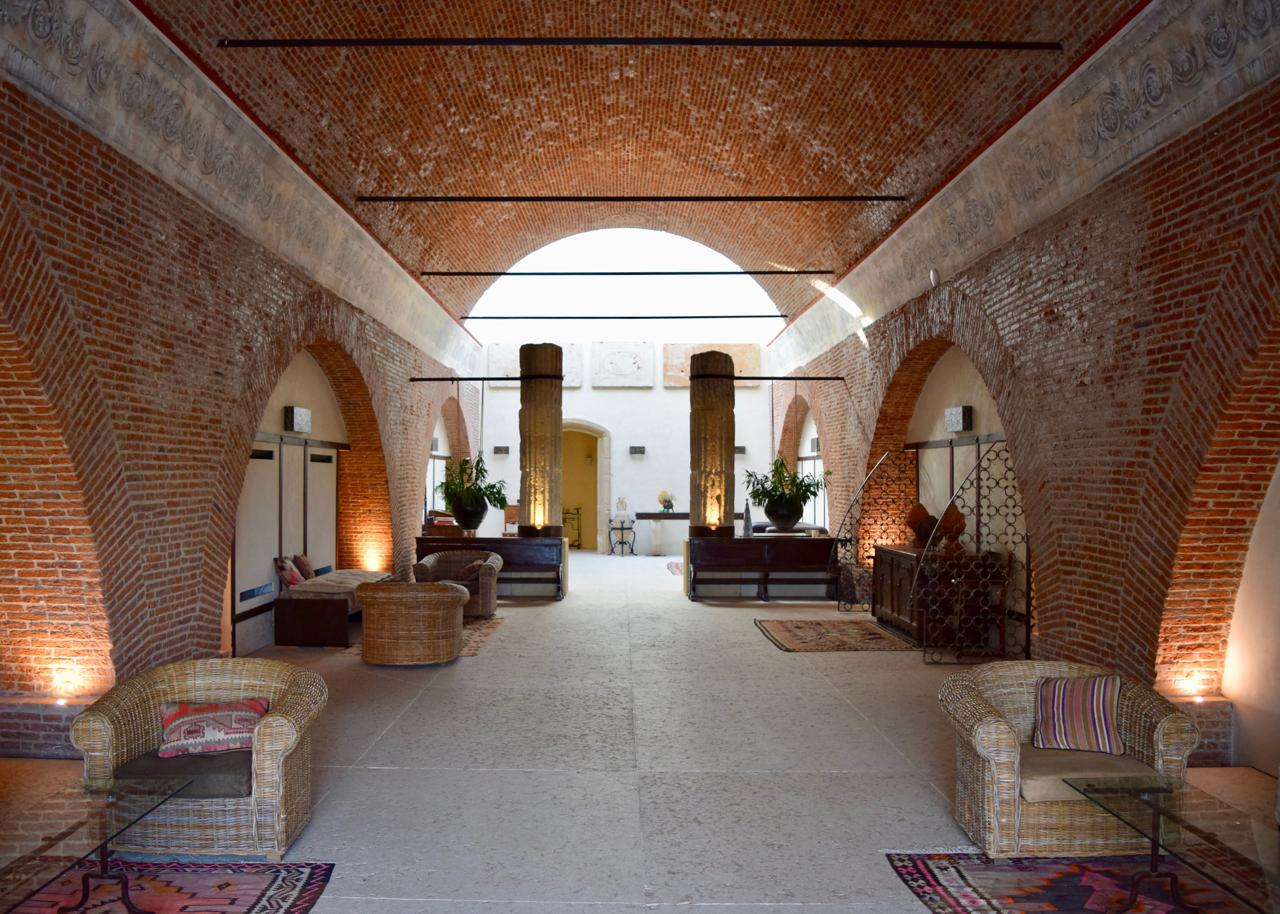 Two pillars — these ones definitely Roman — dominate the central tunnel, the first place into which I entered. Now that the brick vaulted ceiling is above ground, there’s ample light flowing in through the glazed end walls and French doors. A couple of small dogs scampered over and yapped to announce my arrival; they are the queens of this estate and make sure that everyone knows it!

The pleasure of visiting Delser Manor is that you don’t feel compelled to do anything at all. My Italian road trip had been far from strenuous, but on this final day I nevertheless rewarded myself by sitting out in the shade beneath an olive tree, a good novel in one hand and a glass of Delser’s own wine in the other.

FLY: Sophie flew from London Gatwick to Verona with British Airways; flights take 2 hours and cost from £59 return. All the international rental car companies have desks at the airport; Sophie rented hers from Hertz.

La Fonte Degli Dei is a wine relais just outside Negrar. Prices start from €155 per night.

Hotel Maximilian occupies superb location on the edge of Lake Garda, within walking distance of the attractions of Malcesine. Lake view rooms start from €105 half board.