Home WorldIndian SubcontinentIndiaRajasthan Travel Guide to Jaipur, Rajasthan (what is there to see in the Pink City)
RajasthanTravel Articles

One guidebook I glanced at was rather disparaging of Jaipur. Its sights were poorly maintained, it said. The Golden Triangle city’s popularity was due to its accessibility for those wanting to “do” India in a week or 10 days by train or chauffeured car.

However my accommodation was already booked. “Bugger,” I thought to myself, as we touched down at Jaipur International Airport after dark. Somehow, I wanted to prove the writer of that guidebook wrong.

As the cabin crew disarmed doors and cross-checked, I peered out of the windows of the Airbus 320 hoping to see the ships of the desert – camels – passing in the night. I was expecting intense heat, the moist air heavy with exotic spices and wild flowers of the desert.

But what I got after my e-visa was stamped and the officer gave me a head wobble was not the welcome I expected. It was cold. My driver, sporting a dark stripped woolly jumper, just shrugged his shoulders as I noted the low temperature. Even at the antiquated family mansion (haveli) I had to raid other unoccupied rooms for blankets.

The prospect of ten more days in one place seemed like a bad idea.

My mood lifted the following morning, as the sun burned off the gloom and a pot of cinnamon-spiced masala tea was served to my marble-tiled room. With local guide Dilip – whose name means protector – we set off to explore the old city, an even older settlement, and some less-visited outlying quirks of Rajasthan. Talking at speed, without pause, and with mispronunciations and wrongly stressed syllables, I sometimes had trouble keeping up with Dilip’s accented information bursts.

Why is Jaipur pink?

As our white Suzuki squeezed through Jaipur’s city gates, he gave me an opportunity to show just how well-prepared I was. “So do you know why it’s called the ‘Pink City’?”

“It’s because of the locally quarried pink stone,” I knew this would impress him.

“No sir,” he corrected me. “Not stone. The buildings in the old city are painted pink. Every four years it is repainted.” 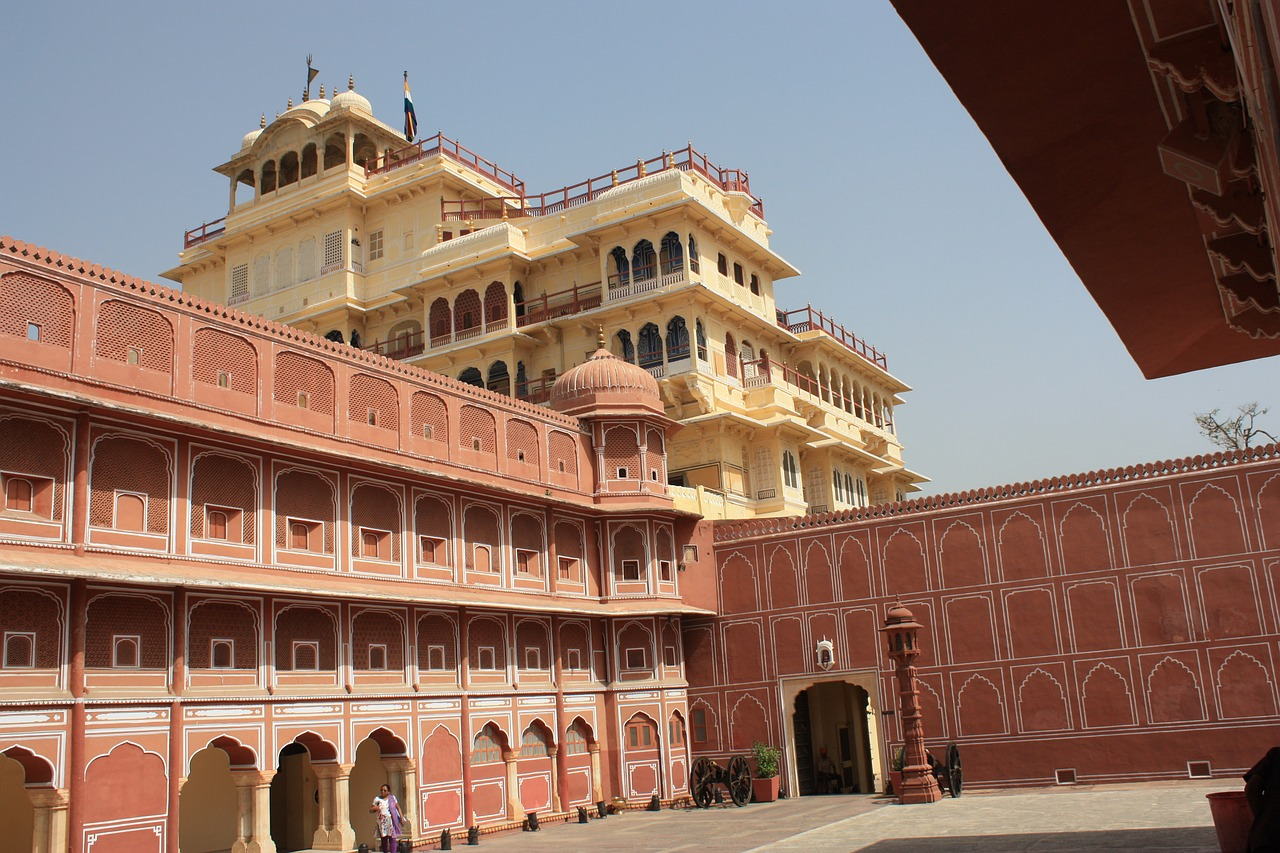 Pink walls of the City Palace

As we parked illegally outside the five-story façade of the picture-perfect Hawa Mahal, I got up close to pyramid-like structure to see if this were true. It seemed to be made from sandstone, but on closer inspection, it was painted with layers of pink paint, the colour of a rare-medium salmon steak.

Over the coming days I encounter varied reasons of why the old city was painted pink. One travel brochure claimed it was to replicate the Mughal red sandstone found throughout the region. Because pink is a welcoming colour and the maharaja wanted to welcome guests, a server at a coffee-house tells me.

A less flattering explanation reckons terracotta paint was used to cover up the poor quality exteriors. It was for the royal visit of the Prince of Wales and Queen Victoria in 1876, confides a host at the Rambagh hotel. ‘Then Lord Albert proclaimed us a ‘Pink’ city,’ she says. Whatever the reason, later I see a work crew painting the walls with calcium oxide paint, making decorative patterns in white lime.

Palace of the Winds 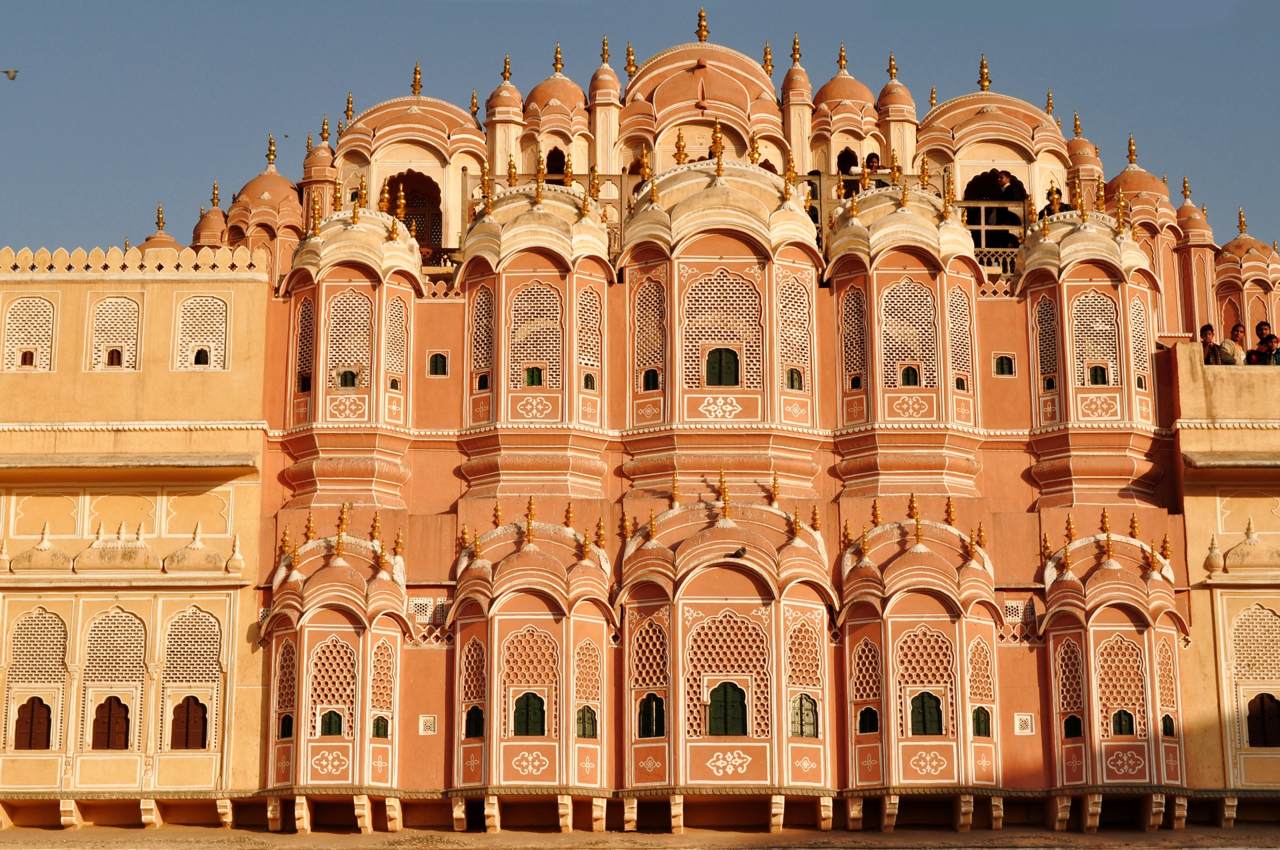 The Hawa Mahal, or Palace of the Winds, is the landmark of Jaipur, an elaborate screen wall of niches with windows. It seems somewhat ironic that the icon of Jaipur that everyone comes to see was designed to allow women of the royal household to observe the bustling market street and festivals in anonymity and without the need to cover their face.

More insight into Jaipur’s regal past is found behind ornamental doorways at the adjoining city palace museum, which features ceremonial halls, a gold thread embroidered skirt, and a frightening display of daggers and blunderbusses. 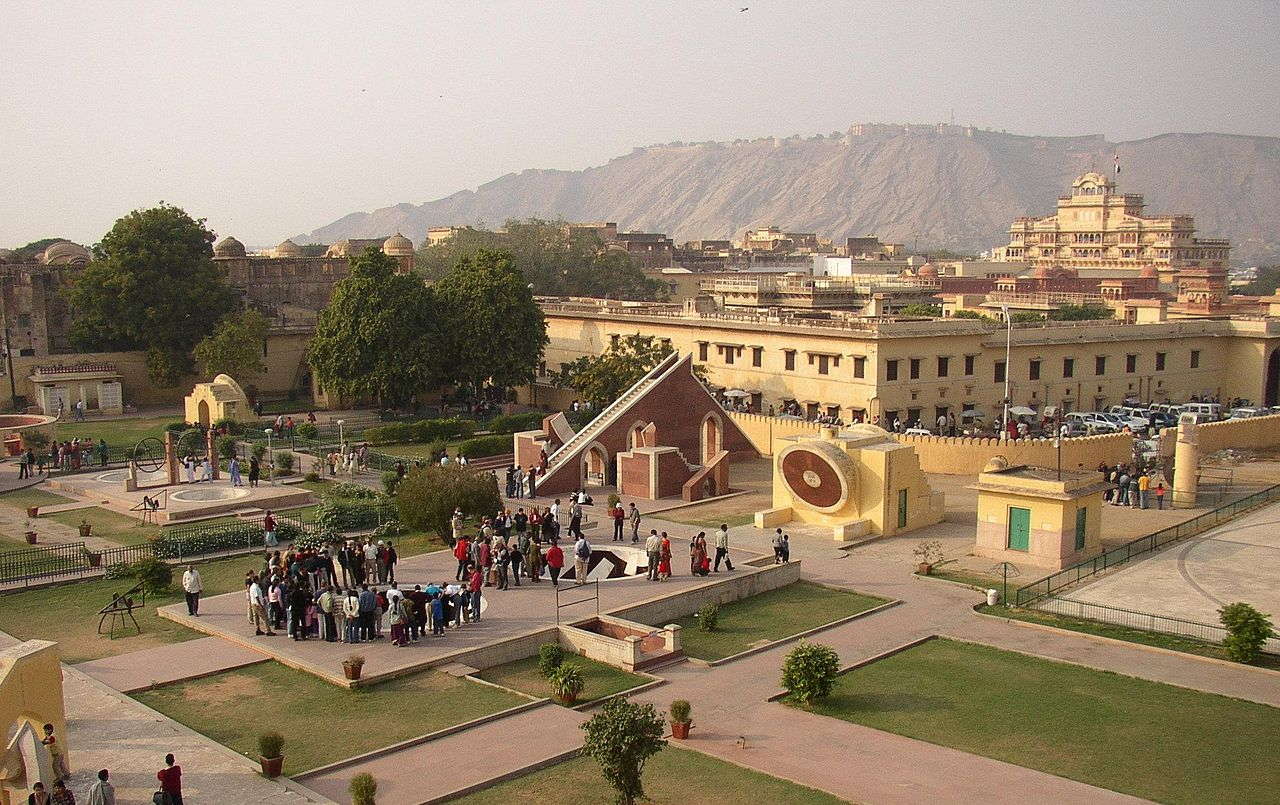 Beside the palace is a 300-year-old astronomical observatory, the UNESCO World Heritage Jantar Mantar, where 19 huge instruments measure celestial bodies and provide remarkably accurate readings. The ruler behind the observatory and Jaipur itself was Jai Singh, who built the city using Hindu town planning principles of a grid of nine squares.

That sacred geography and geometric orderliness is less evident in the narrow lanes of the old city, a labyrinth of bazaars selling saris, sherbet, resin bangles, marble carvings, rugs, silver jewelry, precious gemstones and spices. Much of The Best Exotic Marigold Hotel was shot in and around Jaipur. 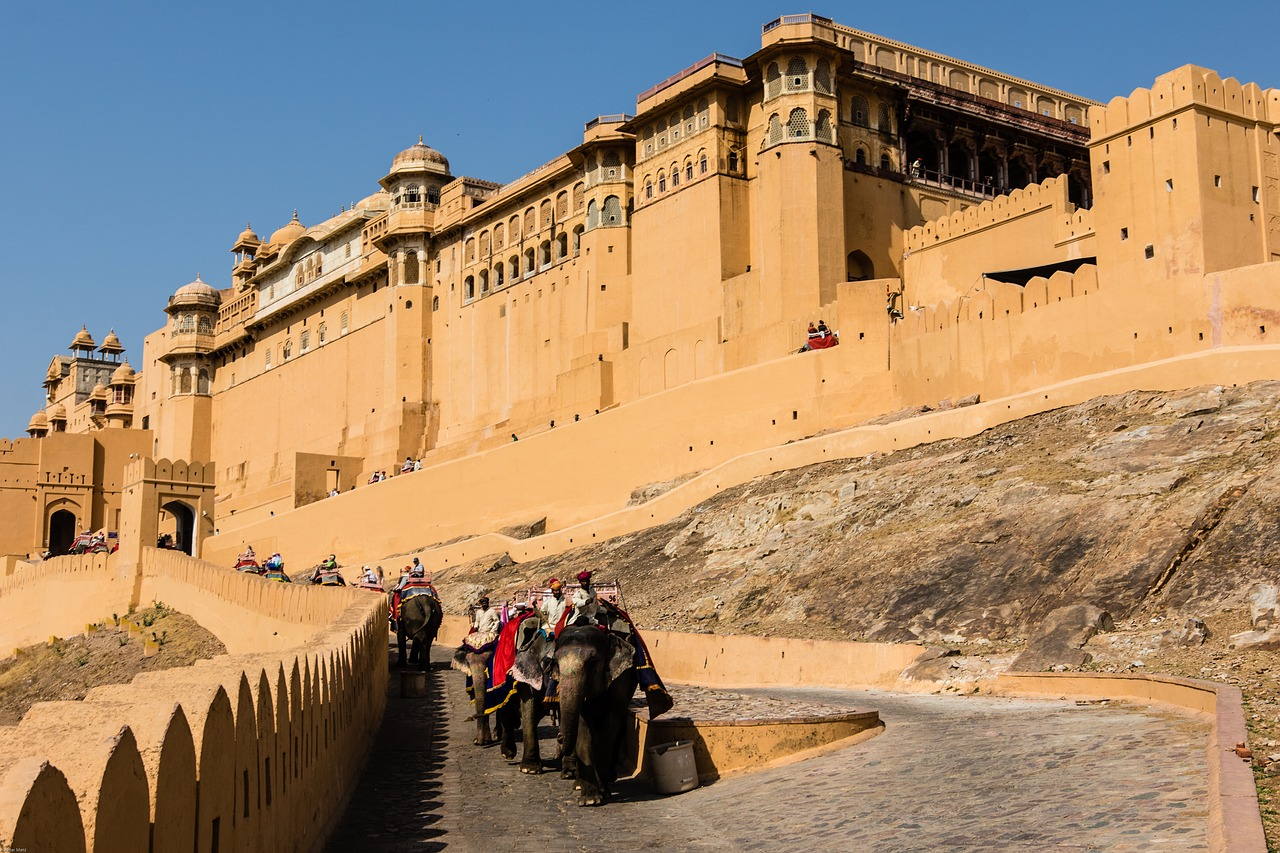 While you could easily spend days exploring the sights and street-life of Jaipur, a majestic wonder awaits on a hillside north of the city, past the Jal Mahal water palace which floats like a mirage on a reservoir of water.

Pre-dating Jaipur, Amer was once the fortified citadel of the princely kingdom up until 1727. Accessible on the back of a decorated elephant, by jeep or an easy 10 minute walk, each successive courtyard contains another fascinating feature, from ornate gateways to water-cooled pleasure palaces to a mirror mosaic chamber which can be lit with a single candle. 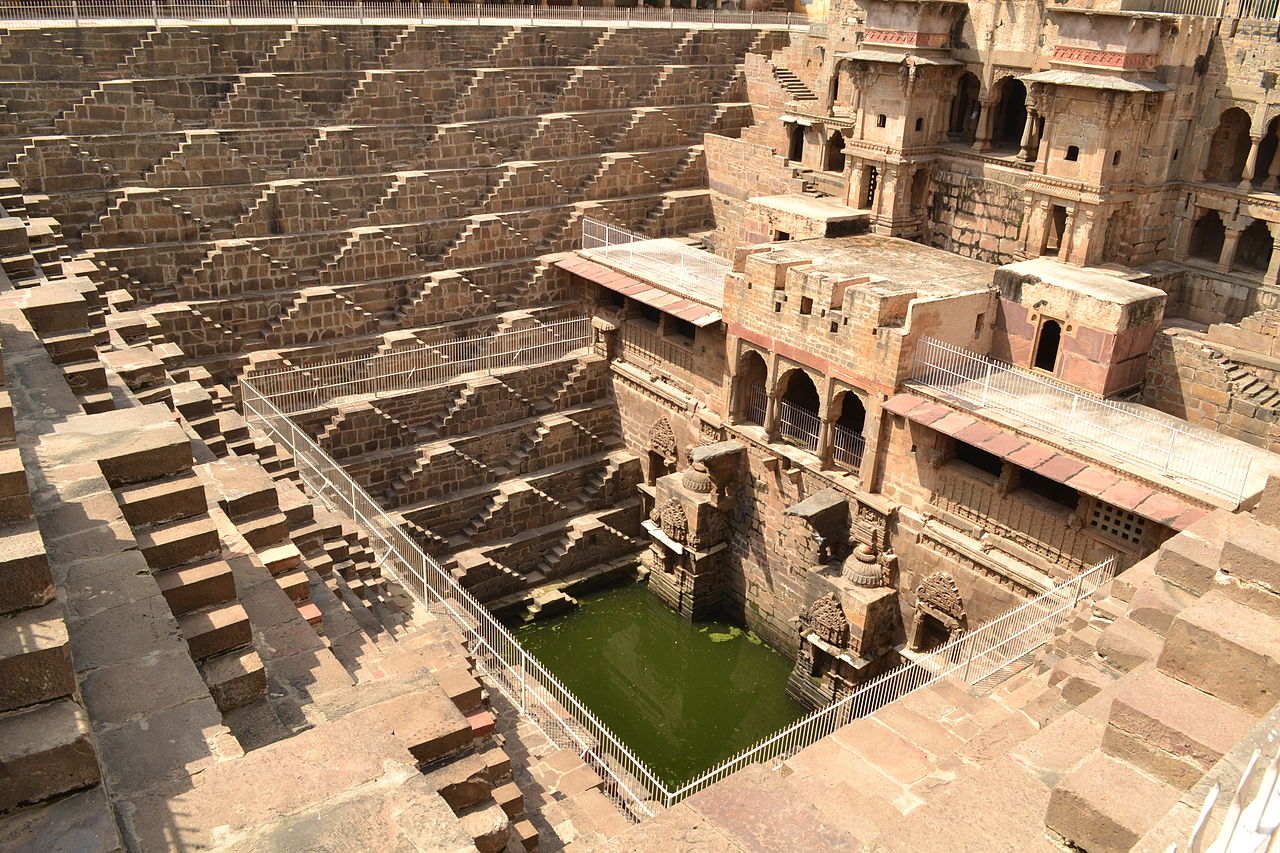 North of Jaipur is the old artist town of Samode, while south, near the airport at Sanganer, craft villages produce blue-dye pottery, block-printed cotton, and handmade paper. Hidden away a few hour’s east, towards Agra, is the world’s largest stepwell, Chand Baori, with 3,500 symmetrical steps tapering down 13 stories like an Escher drawing – it featured in a Batman movie. 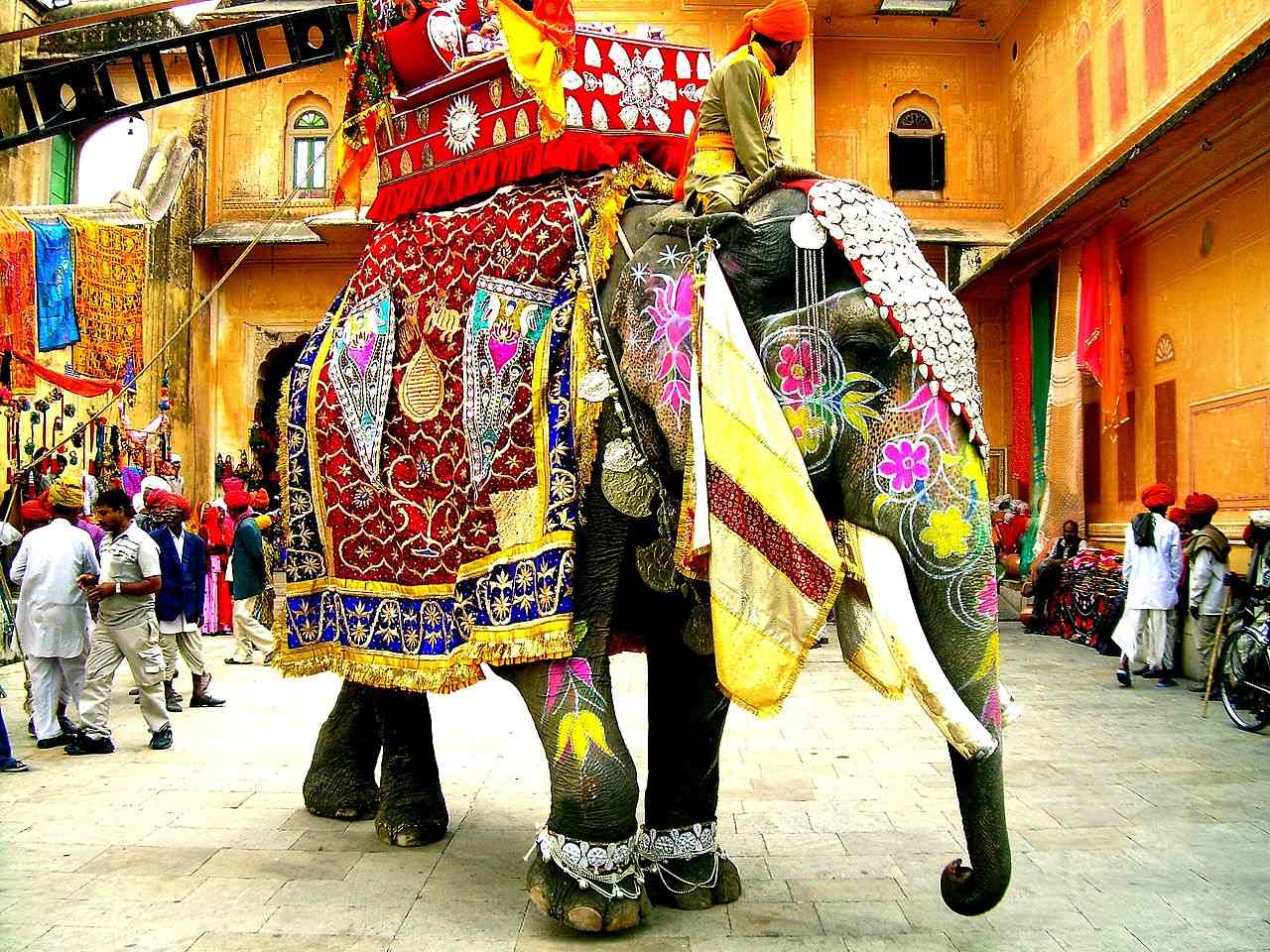 An elephant festival each March is one of Jaipur’s draw cards, with a kite-flying event followed by the Jaipur Literary Festival attracting tens of thousands of domestic and foreign visitors.

GET THERE: Jaipur’s international airport (JAI) has flights from Dubai, Kuala Lumpur, Bangkok and Singapore, as well as frequent flights from most Indian cities including the capital New Delhi and the other main gateway from Europe and the UK, Mumbai. Train is the good way to go around the Golden Triangle, with a chauffeur-driven car the best option to get to less visited places.

VISA: Getting a tourist visa for India is easy, with an online e-visa easily obtainable for US$50 up to 4 months in advance, giving an Electronic Travel Authorization (ETA) for 30 days in return for answering a long questionnaire and providing a scanned photo.

STAY: The former residence of the Maharaja, the Rambagh Palace with its marble latticework, balustrades and manicured gardens is one of the finest heritage hotels in the world. Non-guests can enjoy the Polo Bar, garden lounge or steam train restaurant. Out of town, and spread out as a re-created fort with gardens, pools and fountains, the Oberoi Rajvilas is a magical resort with tented rooms and spacious villas.


GETTING AROUND: A driver hired daily, or a taxi arranged through accommodation is the safest for venturing around Jaipur. Use Uber or Ola apps for shorter trips, or look for the auto-rickshaw drivers earnest for your custom.

TIP: Try the street food. It is nothing like the Indian food you have had back home. In Jaipur, be sure to sample freshly made onion kachori, the baked wheat ball dal baati churma, or a Rajasthan thali featuring all the local specialties.