Porto with its culture, history, lively food and drink scene is a worthy alternative to Lisbon. 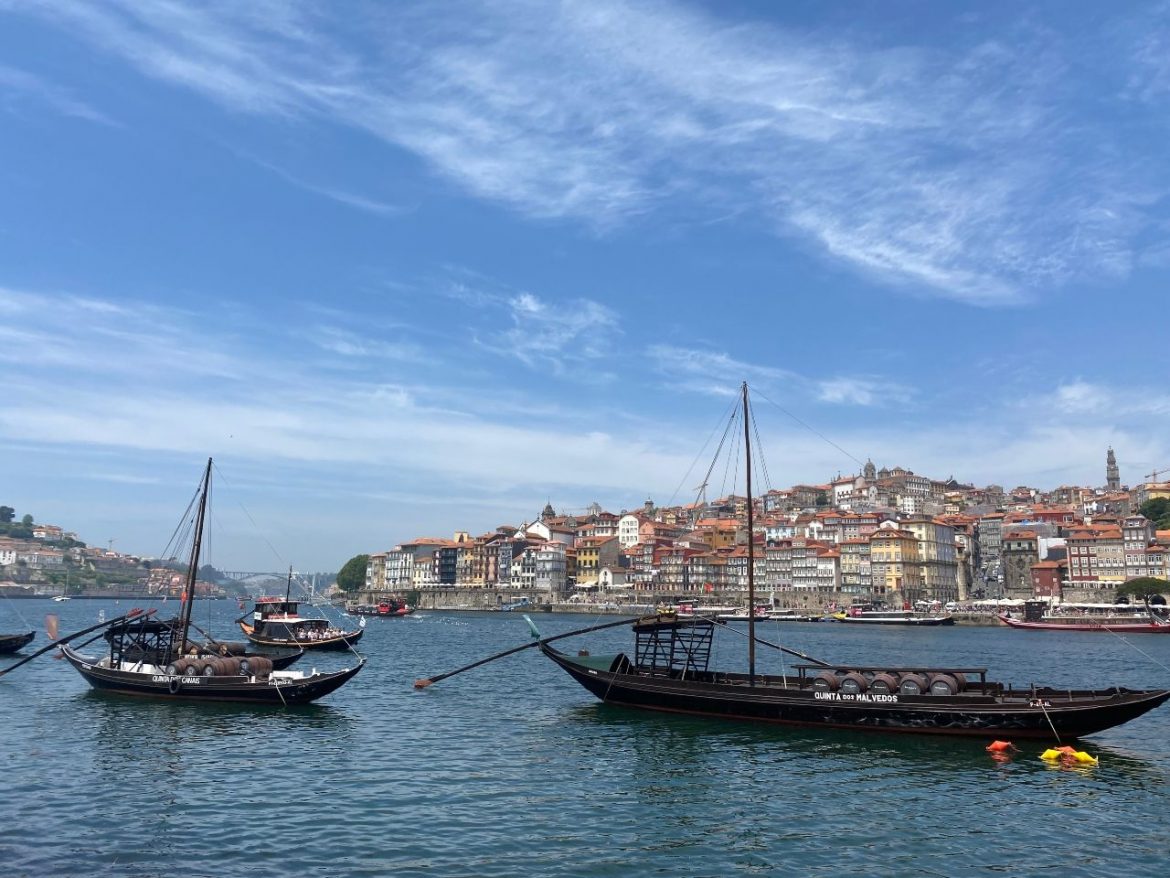 Though often lurking in better-known Lisbon’s shadow, the coastal town of Porto is anything but a poor relation. It combines culture, history, and a lively food and drinks scene with bags of charm. And considering it lends its name to its country and its world-famous alcoholic export, it deserves some attention.

The Portuguese second city is a UNESCO world heritage site which sits in the country’s northwestern corner at the mouth of the Atlantic. A convenient two and half hour flight from the UK makes it an attractive option for a whistle-stop tour.

Here are some top sights, tastes and experiences to add to your schedule.

Check out the views 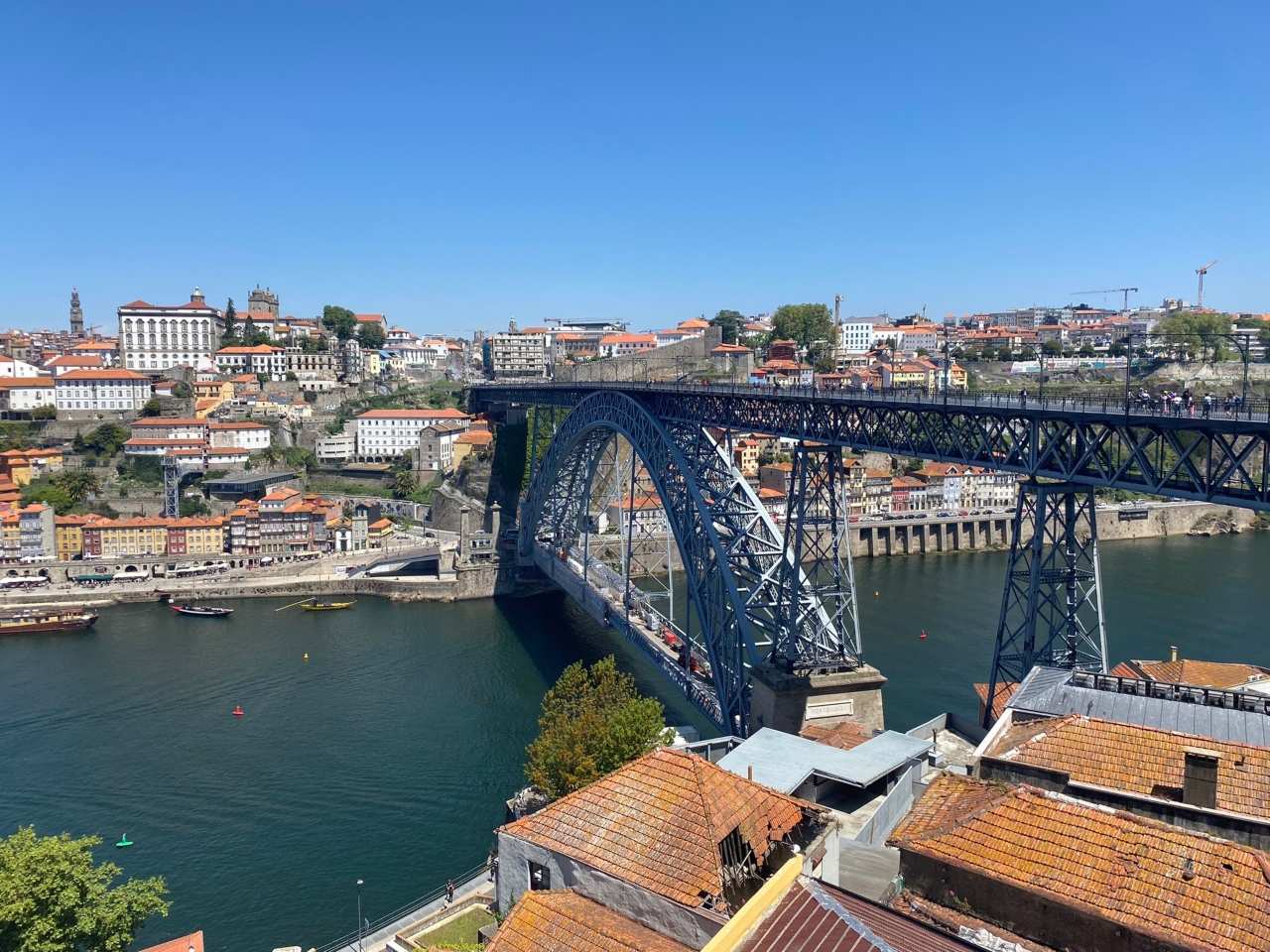 Getting up high is one of the best ways to establish your bearings, and in Porto, the options are plentiful. The majestic steel arched Ponte Dom Luiz bridge offers a double-decker crossing of the river Douro. Designed by a disciple of none other than Gustave Eiffel, it’s one of six bridges straddling Porto’s waterway. Opt for the bridge’s upper level and traverse alongside clattering yolk-yellow trams while you drink in first impressions of the delectable river the Douro and its banks.

Jardim do Morro, a pretty, palm-dotted public park, greets you on the other side, offering another excellent viewpoint with postcard panoramas of Ribeiro opposite. This ancient district’s delightfully crooked merchant’s houses, colourful terraces, and historic skyline look good from any angle, and from Jardim do Morro’s peaceful green space, is especially eye-catching. Glimpse the landmarks, including the Clerigos Tower, a needle-slim baroque bell tower piercing the vista on top of the hill.

Glide back to earth over uneven terracotta-tiled rooftops and touch down in the Vila Nova de Gaia district via a five-minute cable car ride, picked up from the Jardim do Morro’s entrance. 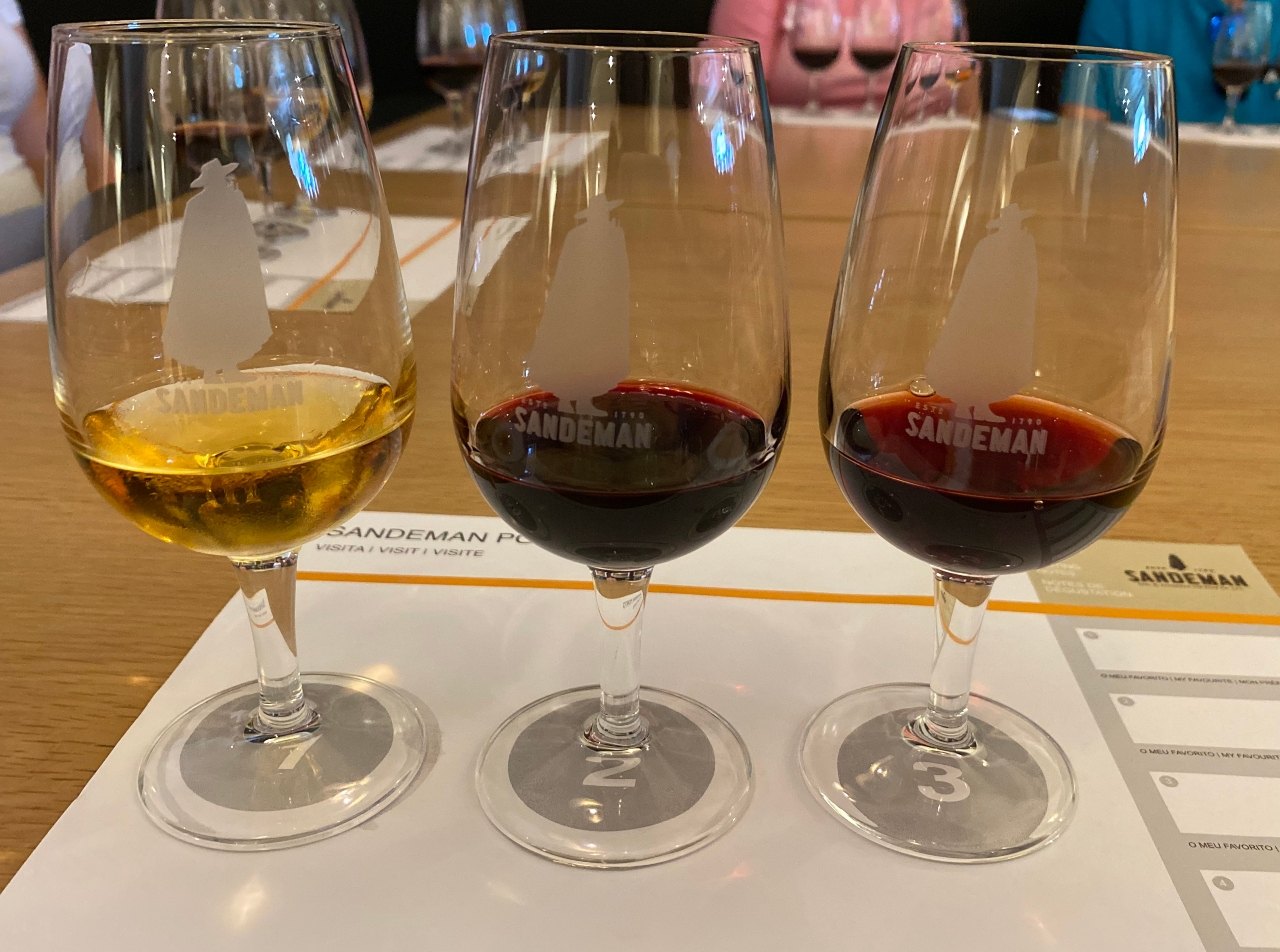 It’s impossible to take more than a few steps along the Vila Nova De Gaia side of the river Douro without encountering the fortified wine and city namesake. The entire riverbank and surrounding area is dominated by the familiar names of Porto’s myriad port wine cellars, each offering tours and tastings. Sampling and learning about at least one or two is a must.

If the multiple options look overwhelming, Sandeman is a good starting point. Here, a tour of the airy cobbled cellars and museum, led by the mysterious caped hero synonymous with the Sandeman logo comes with a lesson in alcohol advertising history. As your sombrero-sporting guide will explain, Sandeman was one of the first wine brands to label and advertise their product.

Though port is a traditional drink, don’t miss the chic converted shipping container bar out front, where mixologists give the age-old beverage a modern spin with an intriguing range of cocktails. Treat your tastebuds to a Sandeman Sangria or port and ice cream combo Sandeman Fizz.

The neighbouring port house,  Porto Cruz catches the eye. Its striking blue patterned tiled facade rises up to an open-air rooftop bar. On a warm day enjoy 360 degree views of the Douro and its imposing bridges and sip more of the famous drink soundtracked by laid-back beats from a resident DJ.

When hunger strikes, you’ll find a microcosm of Porto’s popping gastronomic scene in historic Mercado Beira-Rio. The narrow food hall dates back to the 1800s, and from plump prawns to pastries, cod cakes or vinho verde, to cheese platters and gelato, traders offer something for every palate. Pitch up at a table indoors or out and follow your senses to discover what tickles your fancy.

For dinner, make your way to Miss’Opo. This casual eatery is a guesthouse, and minimalist clothes shop too, but its creative Portuguese plates are the main attraction. With a single handwritten scrapbook-style menu that changes frequently, your experience here is sure to be a one-off. Enjoy the freshest flavours varying from peppery risottos to rich Portuguese sausage surrounded by industrial concrete walls and quirky mismatched furniture.

It’s easy to idle away the hours in Porot and Praia Da Luz bar and restaurant, with its multi-level decking and own beach, is designed for taking it steady. Order local speciality fresh sardines in zingy tomato sauce, washed down with a crisp green wine and settle in to admire the Atlantic breakers. 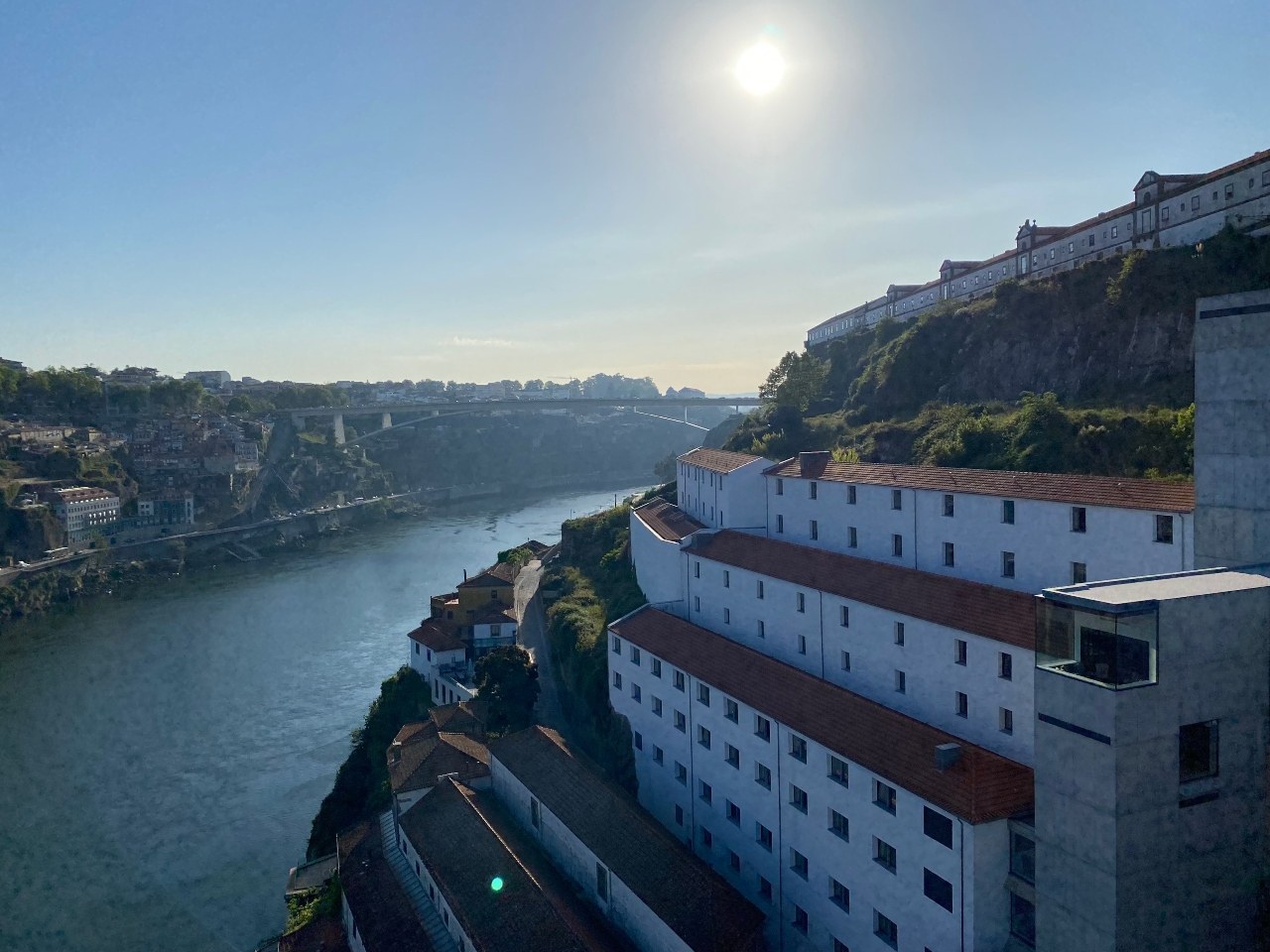 Sunrise Serra Do Pilar by the Douro

In Porto, a daily dose of the Douro is essential, so set your alarm to experience the sun rise over the river. Welcome the day with a run or stroll along the Avenue Gustave Eiffel in the direction of Mr Eiffel’s very own masterpiece, the Maria Pia bridge.

Here you’ll pass fishermen rather than tourists as you witness the waterway coming to life. Crane your neck to marvel at the whitewashed walls of the former monastery Serra Do Pilar with its circular church and cloister bathed in beautiful early light.

Cross the Douro by water. Douro’s river taxis, modelled on the wooden cargo Rabelos which used to transport port from the Douro Valley to the city’s cellars, offer a speedy route over to Ribeira. 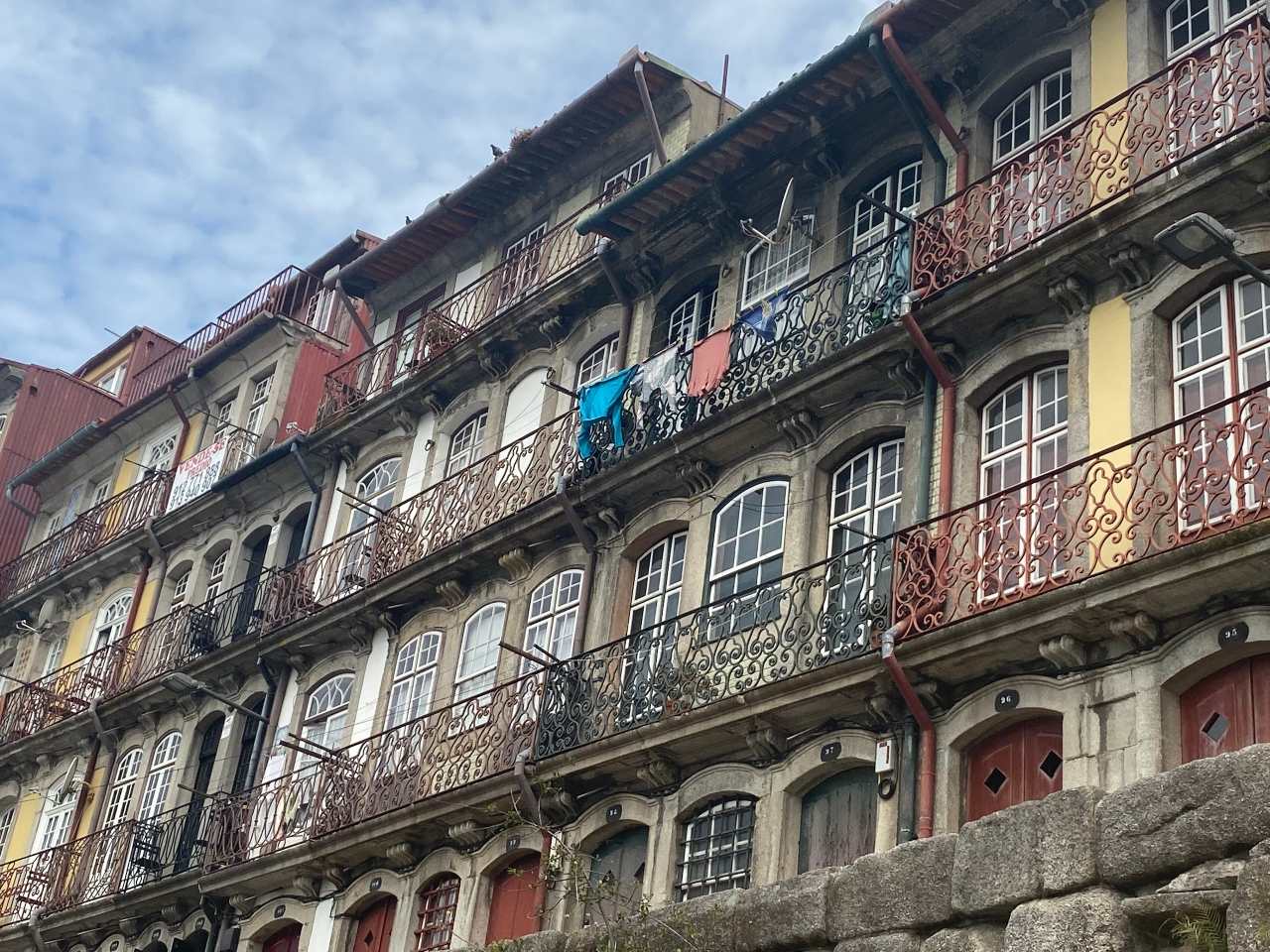 Though Ribeira’s riverbank pulses with tourists and souvenir stalls, its draw is magnetic. Mosey around Praça da Ribeira, a cobbled square jammed with bars and restaurants and make a coffee pitstop to watch boats heading upstream to the Atlantic, or downstream to the Douro Valley.

Ascending from the water’s edge at a relaxed pace with regular breaks is recommended, for the steep, cobbled labyrinthine streets and steps are designed for thigh burning.

Porto’s not somewhere you’ll want to leave in a hurry, but regardless, its train station, frequently cited as one of Europe’s most beautiful, is worth a visit. Ignore the departure boards and lose yourself in Sao Bento’s mesmerising tiled entrance walls. Thousands of intricately hand-painted ceramics document Portuguese history and life stories in their blue and white glaze, taking you to any destination you want. 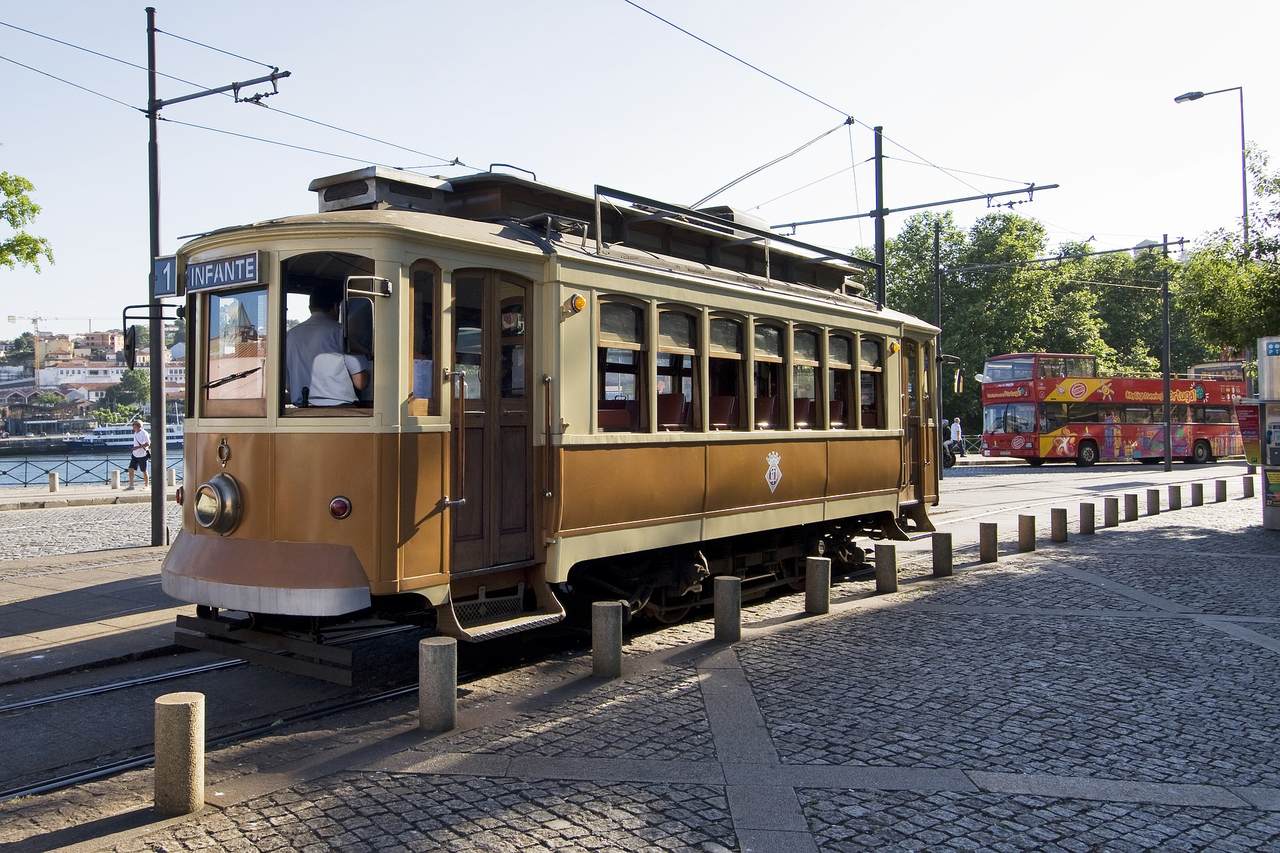 Take the tram in Porto Image by SofieLayla Thal from Pixabay

For a change of pace, jump aboard the line one rickety tram from Ribeira to Foz. The rattling journey takes around half an hour and hugs the riverside all the way to the seaside settlement. With its tranquil tropical gardens and lengthy promenade, Foz exudes an air of calm.

The contemporary and chic One Shot in Porto’s União de Freguesias do Centro district – old town – is convenient for just about everything. It is just 650 yards from City Market Bolhao and 900 yards from Ferreira Borges Market. Double roos £118 per night.

FLY: The closest airport is Francisco Sa Carneiro Airport, situated about 10 kilometres north of the city.

TRAIN: Porto is the most important railway hub in Portugal. There are two main train stations.

Also read: Top 10 things to see and do in Aveiro, Portugal

Brighton: What is a flight in the BA i360 Observation Tower like?