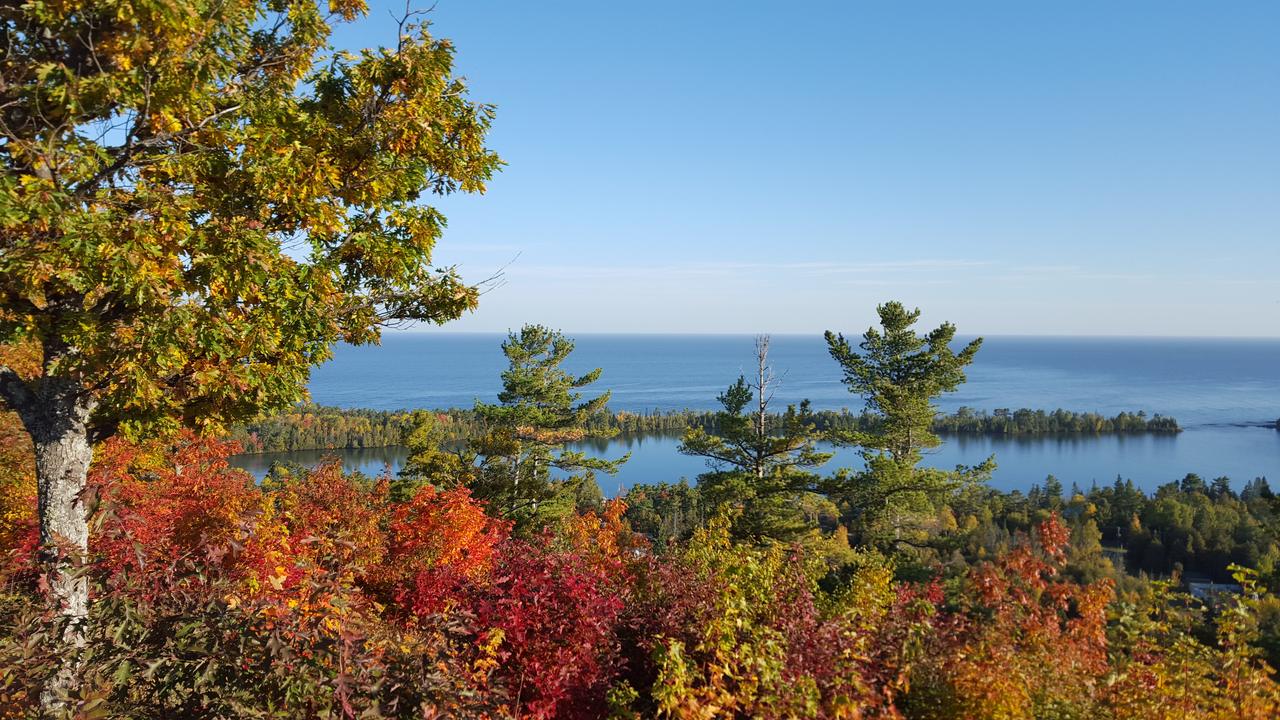 When you feel like an escape into nature with a dollop of culture thrown in, perhaps consider an Autumnal road trip to America’s Great Lakes. Nature herself provides you with visual entertainment with an abundance of lushly hued foliage of orange, red, purple, browns and yellows. 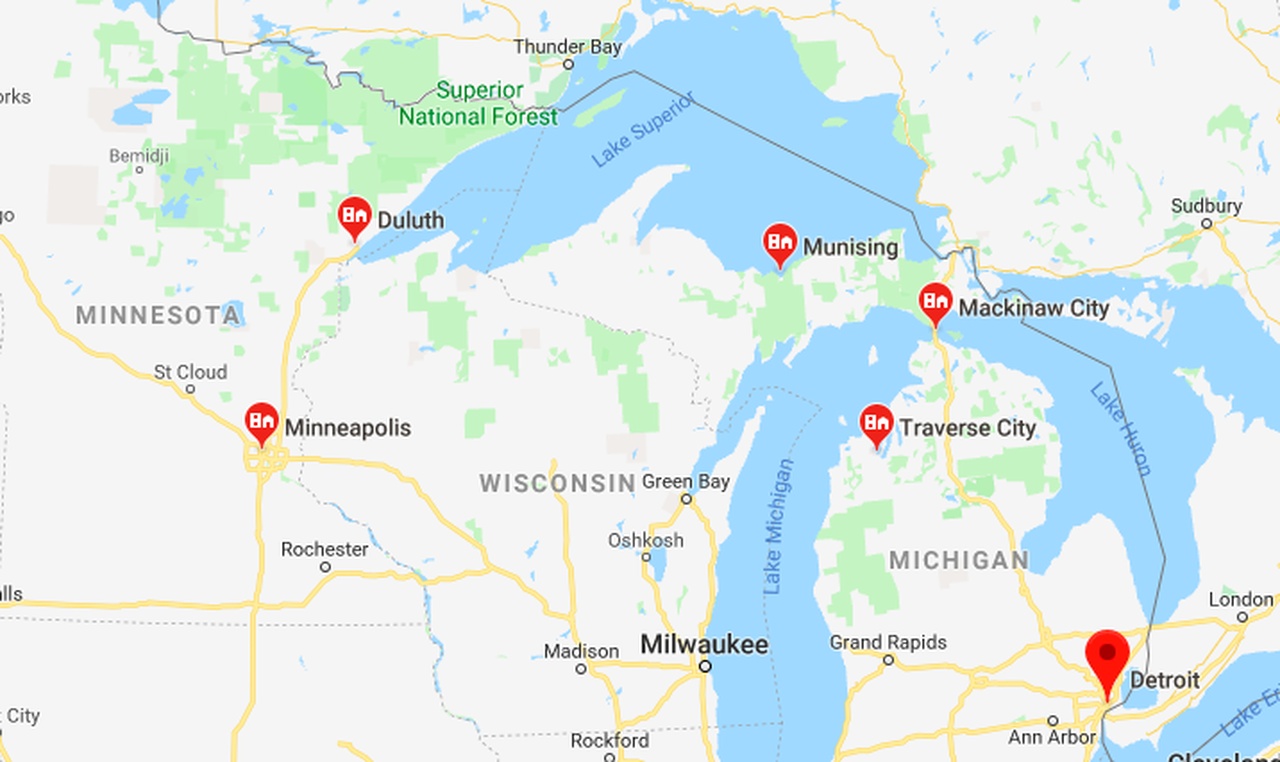 It’s a mayhem of colour along miles of well-tended roads that swerve around the Great Lakes from Detroit to Minneapolis. Be assured that the word ‘Great’ is not used lightly as you could fit in the whole of Switzerland into the 300-mile width of Lake Superior. Along the way there are woods with waterfalls, changeable weather, changing time zones and plenty of craft beer brewed with the fresh clean water of the lakes.

There’s more. Bring your binoculars and wing it at Hawks Ridge to watch the bird migration, then experience the art glass blowing. It all ends with an insightful rendez-vous with Prince (of Purple Rain fame) and if you have shopping legs, a trip to the American Mall.

The gateway to this great adventure is through the city of Detroit whose bedraggled past still haunts its newly regenerated Downtown. The city is well-worth exploring before heading off into Traverse City.

It’s a four-and-a-half hour drive to Traverse City, a farming area in Michigan with plenty of cherry trees and, unexpectedly, rows of vineyards. The scenic 65-acre Chateau Chantal Winery is located on top of a ridge on the Old Mission Peninsula. Temptingly there’s a wine-tasting session on offer where a dozen wines jostle for attention. And an outstanding view. 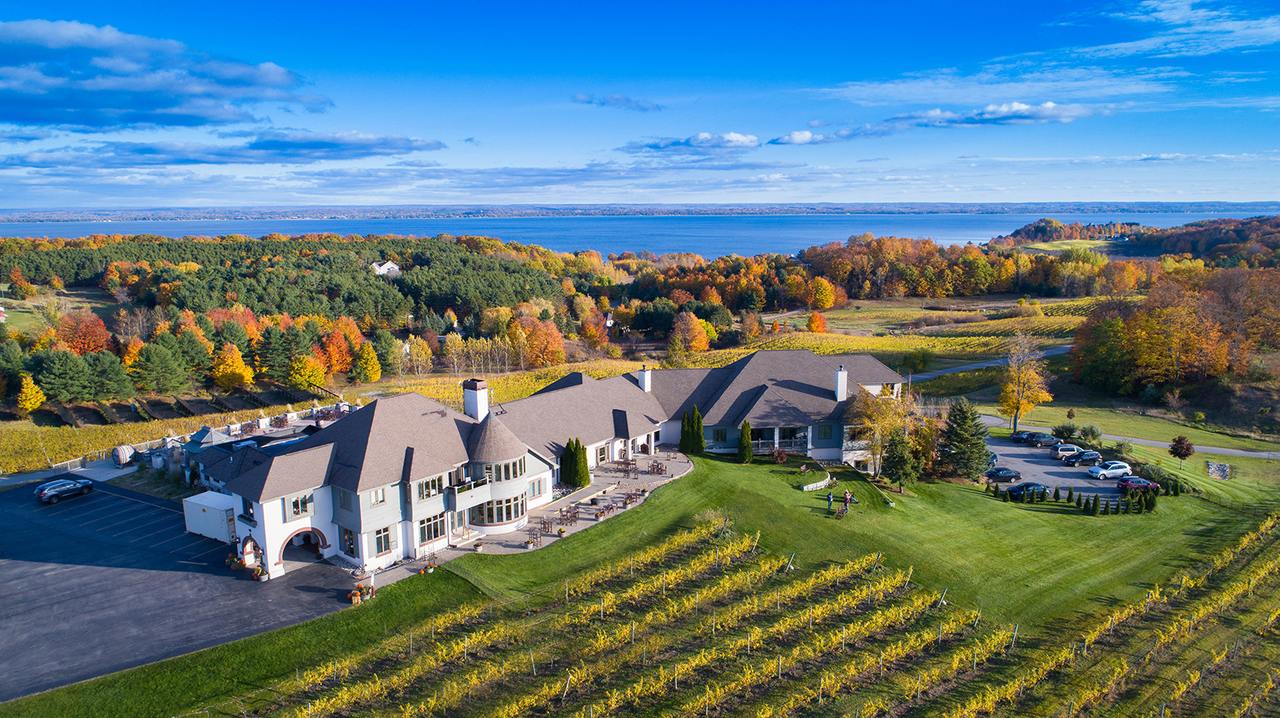 The combo was pretty heady stuff but the day hadn’t ended. We end up having dinner at a brewery in Traverse City and ‘heady’ soon morphed into ‘hazey’. The North Peak Brewing Company located in handsome imposing brick edifice of three floors and a basement, has hearty fare that is perfectly downed with their sometimes unusual craft beer. 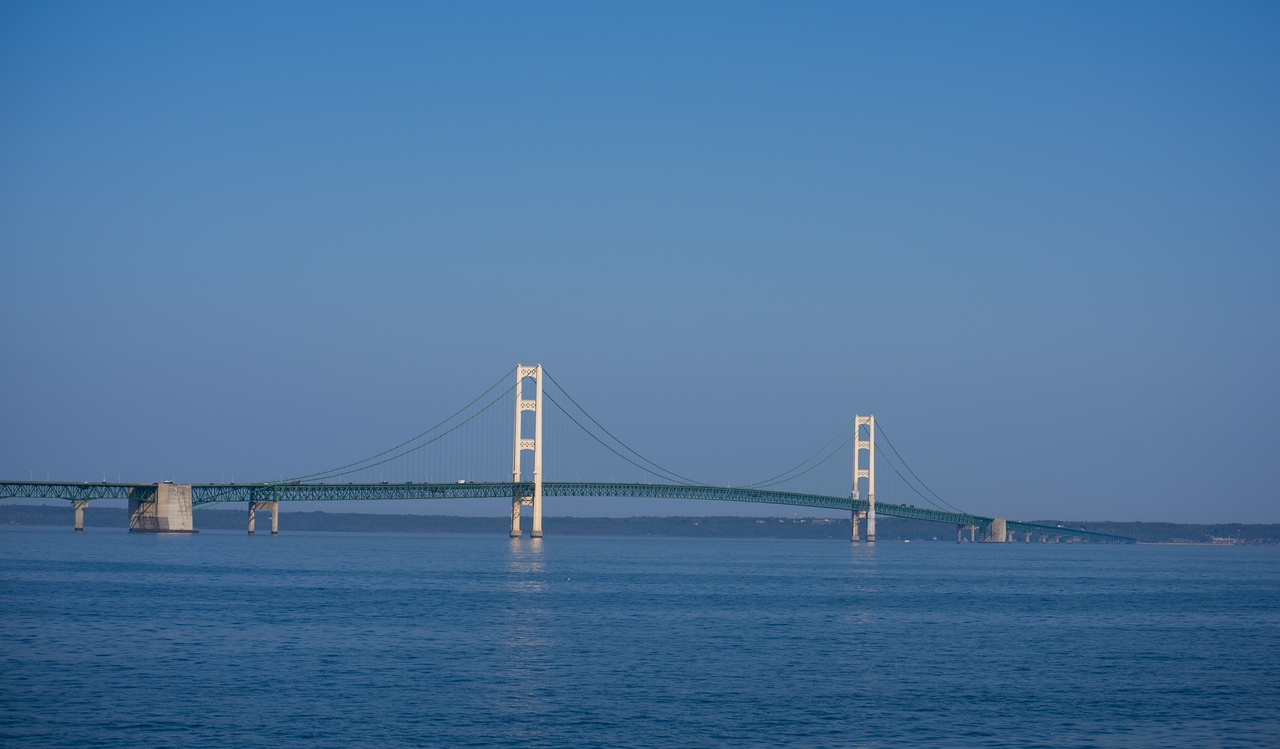 There’s plenty of time to nap during the drive to Mackinaw City in Cheboygan County. It is at the tip of the Lower Peninsula and we stop to stare at the historic lighthouse before crossing the five-mile long Mackinac suspension bridge. It spans the Straits of Mackinac to connect the Upper and Lower Peninsula. Weirdly Mackinaw and Mackinac are both pronounced Mackinaw.

We passed through the town of Christmas and then Marquette a hilly town by Lake Superior. We take route 31 for a 64-mile straight road to Munising in the Upper Peninsula. Maple trees and pine trees straddle the roadside offering a mix of green and shades of burnt red. The pretty harbour towns on the way are great to explore.

Charlevoix and the Mushroom Houses

In Charlevoix the cherry is king and cherry pies are everywhere. The high street is strewn with sweet shops and in The Cherry Republic shop I pick up some cherry soap and cherry chocolate covered malt balls.

This is also home to the Mushroom Houses, a clutch of mushroom-resembling homes designed by Earl A Young who rolled them out in the early 20th century. 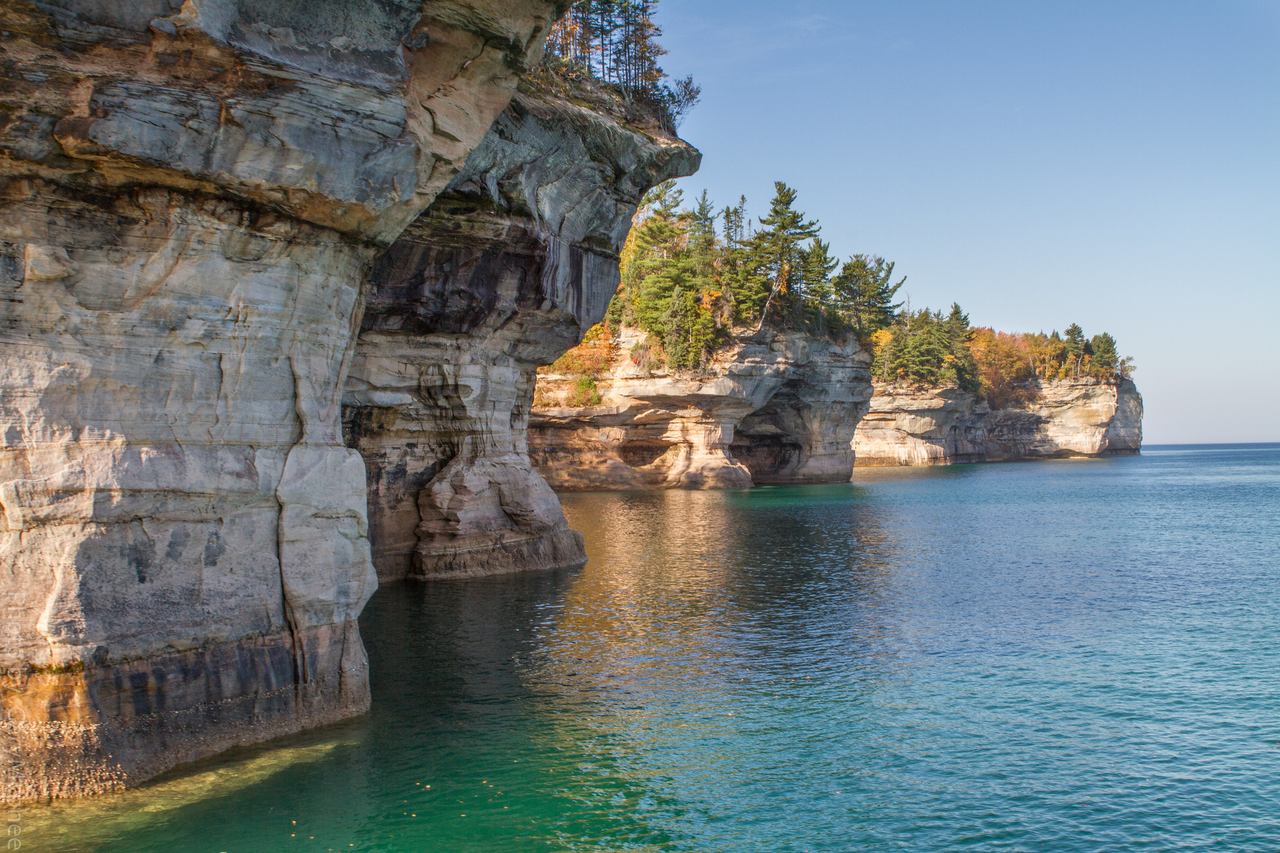 Munising shares its shoreline with the massive Lake Superior. Hopes of taking boat trip to see the “Pictured Rocks”, a mass of cliffs with colourful streaks made by various minerals are dashed. On this chilly day the rainy weather was whipping the lake water into a frenzy so we had to make do with seeing the rocks from a distance.

Further along at the Michigan Upper Peninsula deer roam in land that remains seemingly untouched. The locals are called Uppers (pronounced Youpers). It’s a quiet life here and the Youpers were keen to strike up a conversation.

We cross the border on US Highway 2 to Wisconsin and my iphone clock skips an hour to acknowledge the time zone change. The road is still long, the weather just as windy but the cherry trees are subsiding making way for cornfields and meadows.

We stop at Copper Falls State Park and follow the “Doughboy’s Trail” over ground thick with colourful leaves. Eons of erosion of greenstone and granite mountains has produced a dramatic setting for Brownstone Falls. At the point it meets with Tyler’ s Fork two rivers converge to plunge with unstoppable power 30 feet into the Bad River gorge. It is a spectacular show complete with spray. 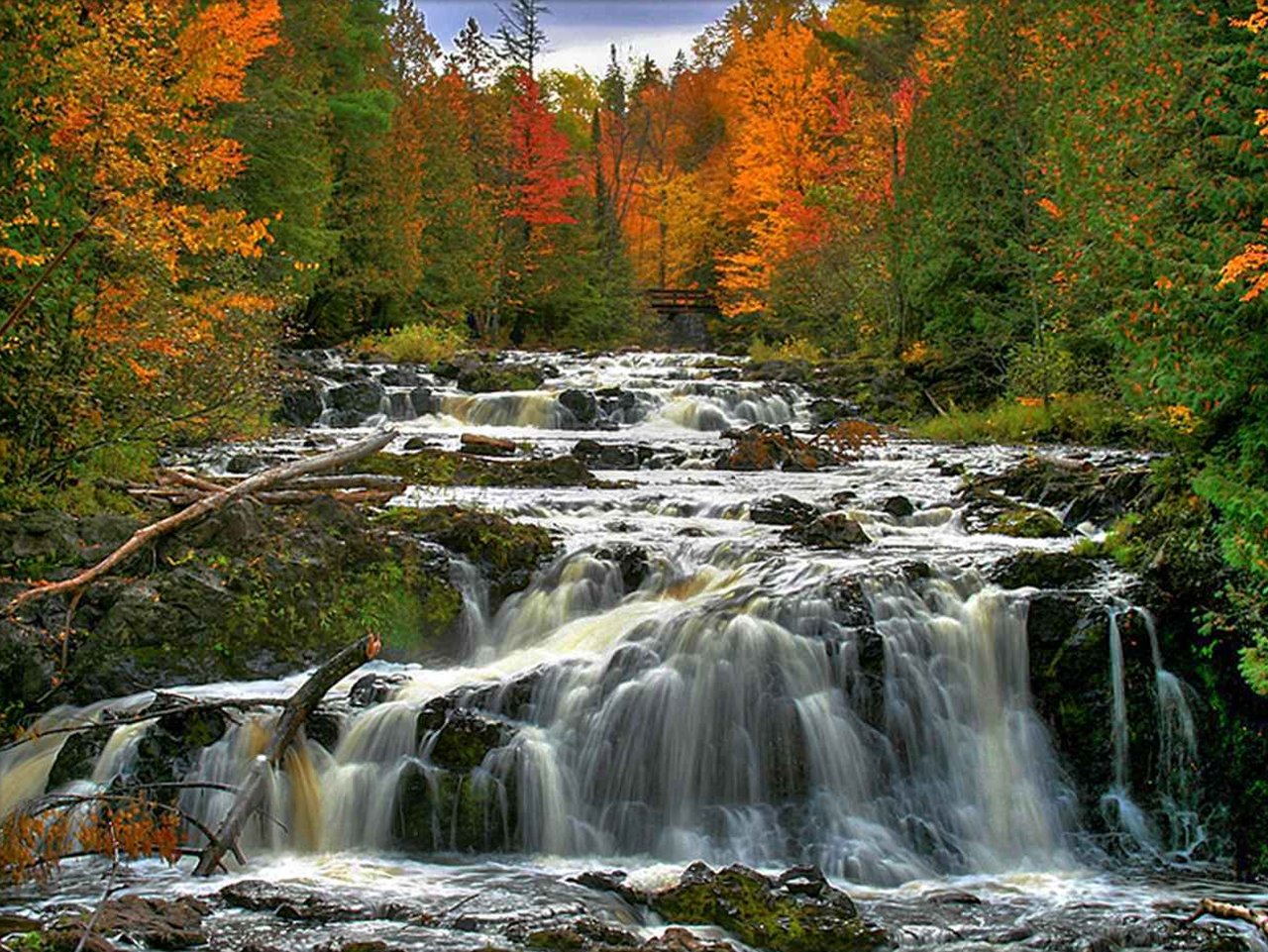 Our guide tells us that into the surrounding woods we may well have come across wolves, dear or bears. We move on.

Later we enjoy the calmer waters of Lake Namakagon. The lake spreads out from the Mogasheen (which means “Little Moccasin”) resort where we pitch up that night in one of their wooden chales. It’s a beautiful spot bought a generation ago from Native Americans. 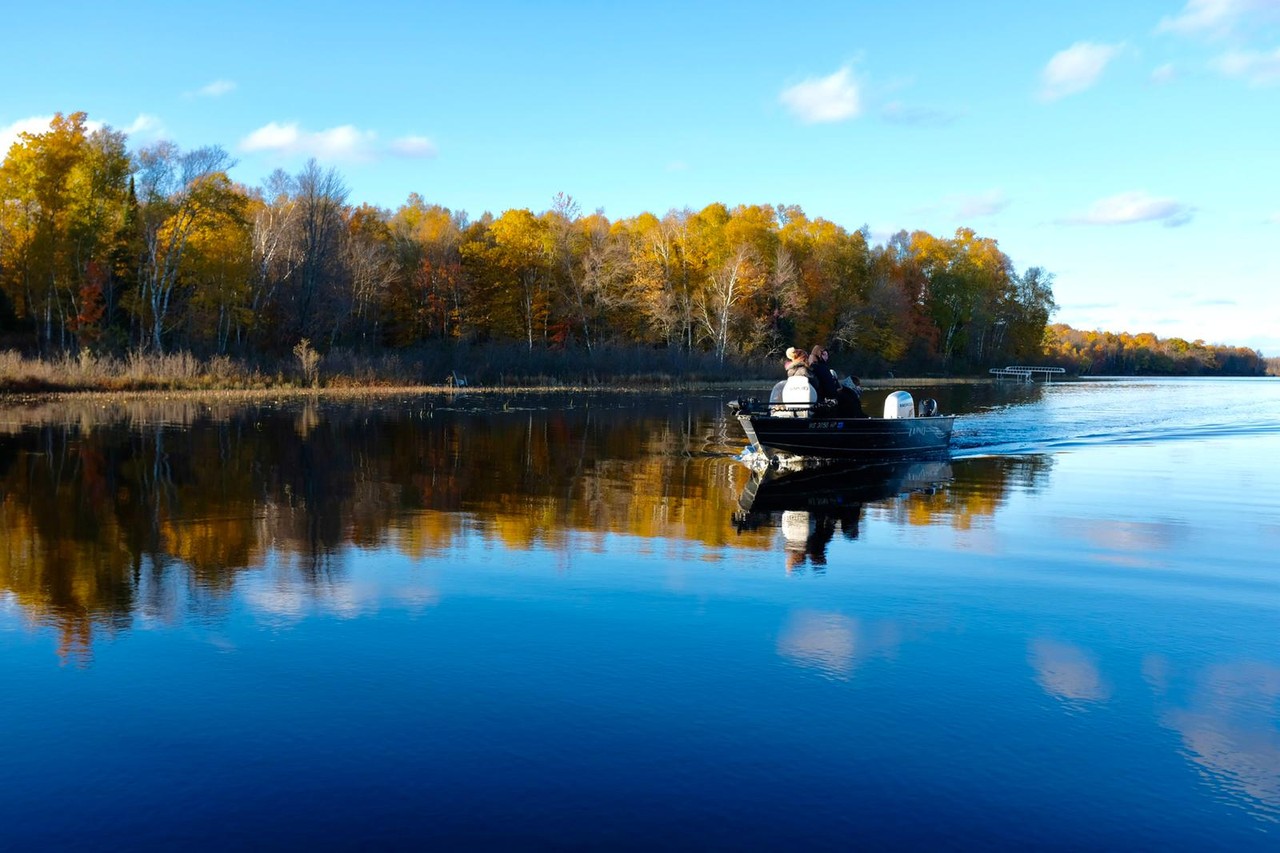 The water is supremely serene and stunningly blue in the afternoon sun. Yet it is freezing. The owners of the resort dish out hats, scarves, blankets and warm cocoa with crème de menthe to sip in the pontoon while enjoying a invigorating ride across the lake.

Breakfast is at the slightly surreal red bricked Brick House in the town of Cable, Wisconsin in the Chequamegon National Forest. There are only 800 people living in Cable and this is the only café. Some burly locals smile at me curiously as they they tuck into giant sandwiches. In the meantime my coffee cup is refilled as a matter of course while I nibble  on French toast and pancakes.

Back on the road it’s around an-hour-and-a-half to the Duluth a major port city on Lake Superior in Minnesota. 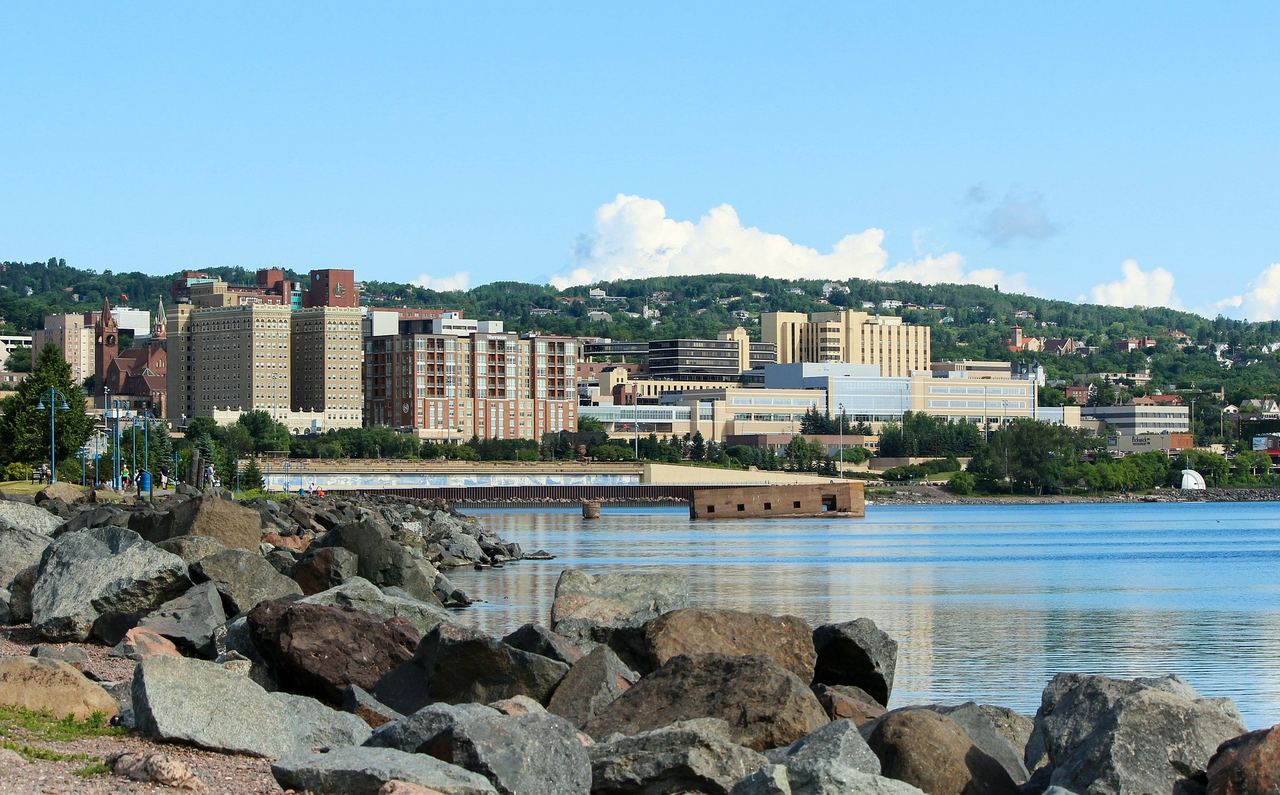 We arrive at the town of Petaski and grab a beer then back on the road passing through a narrow road heavily hemmed by trees – it’s dubbed the tunnel of the trees.

We stop at Hawk Ridge to channel our inner birdwatcher. This is the only place to witness the Fall migration to see migrating raptors, originating from areas as far north as the Arctic concentrate in impressive numbers at the western tip of Lake Superior.

Later and quite randomly we join a glass blowing class at the Lake Superior Art Glass in Duluth. There’s no rhyme or reason other than it’s available. I clutch my red glass pendant for the three hours it takes to drive to St Paul, the capital of Minneapolis.

St Paul is the capital of the sprawling, vibrant metropolis of Minnesota where 11 miles of sky walkways allow locals to get around in cold weather.

Though it’s snowing it seems plain wrong not to explore especially as I am standing at the halfway point between the equator and the North Pole. So snubbing the sky walkways I make my way to the sculpture garden to browse around its 40 incredible artworks – the most famous is Klaus Van Oldenburg’s Spoonbridge with Cherry looking impressive as snowflakes begin to settle on the cherry. 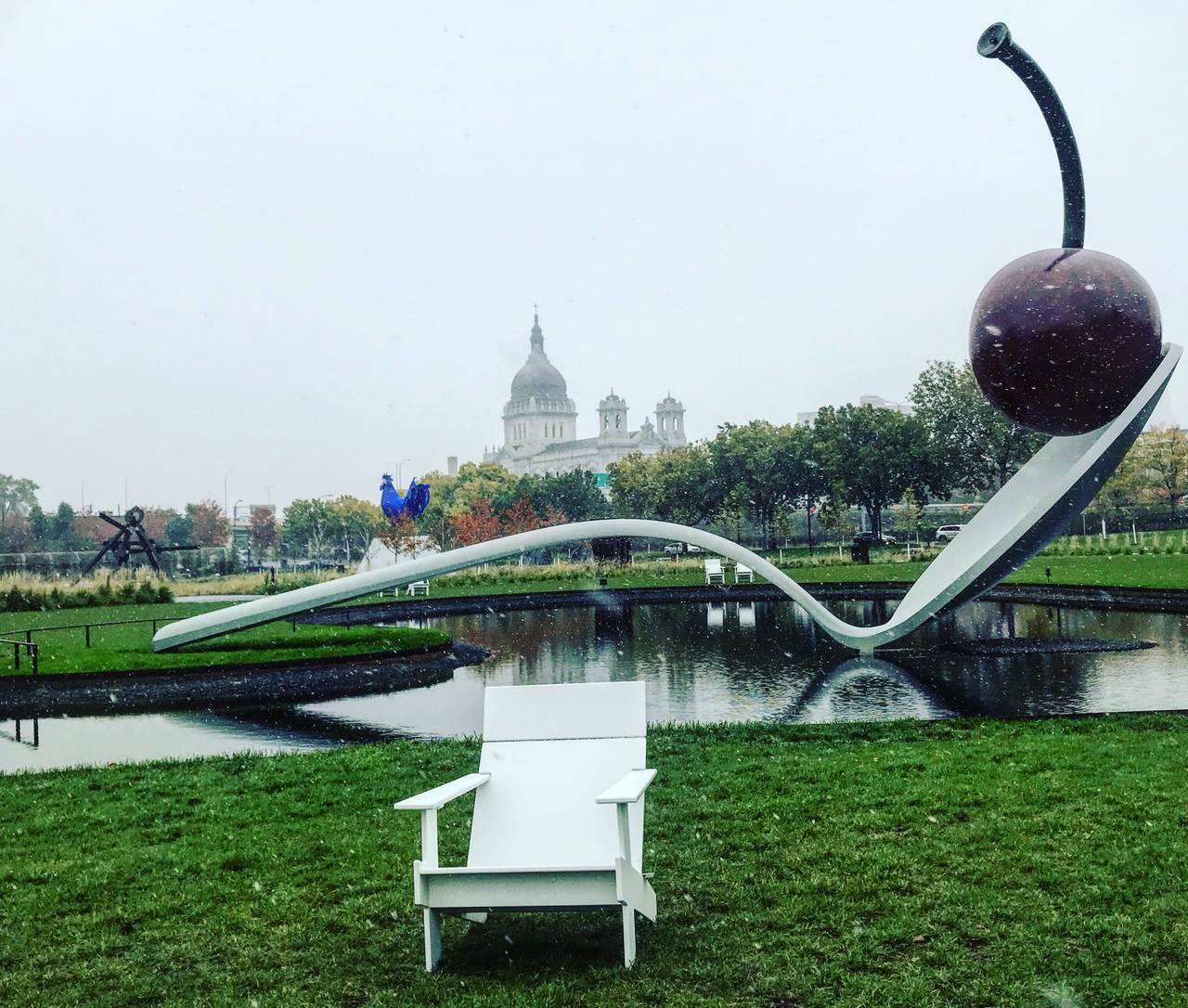 Around Summit Avenue Victorian mansions have been preserved and the city’s cathedral is modelled on London St Paul’s Cathedral. It is also famously the birthplace of F. John Fitzgerald who penned The Great Gatsby. Dinner that night was at Fitzgerald restaurant on Cathedral Hill. They say the great author’s tipple was gin and so that night, it was mine too.

Paisley Park, the home of the legendary rock star: Prince

It’s a 30-minute drive to Paisley Park, Prince’s living and working space. It’s a massive complex treated by staff as sacred while visitors are treated as pilgrims. Prince’s ashes are in the rafters of the hall and are revered. We bow our heads for a moment’s silence. Turns out that Prince was both philanthropic and deeply spiritual as well as being a talented rock star.

The last stop is the is the Mall of America on E Broadway, Bloomington whose three levels are packed with 525 shops around a huge theme park. Best of all it is tax free shopping.

PACKAGE: Bon Voyage can tailor make packages to the Great Lakes region.
MORE INFO: The Great Lakes USA is the largest expanse of freshwater in the world with a unique and diverse landscape. This region, which is the size of continental Europe, includes the U.S. states of Illinois, Indiana Michigan, Minnesota, Ohio, and Wisconsin.
on the roadUSA
0 comment 3 FacebookTwitterPinterestEmail
previous post